Race Report: Contador, perhaps driven on by the pressures of the upcoming CAS announcement regarding his fate in June, destroyed the peloton on the first real mountain day of the Giro, riding away from (almost) everyone on the steep slopes of the Grossglockner.

167km today from Spilimbergo to the summit of the mighty Grossglockner just across the Austrian border. A mighty mountain day, the first of two in Austria, berating the riders with some massive climbs.

After yesterday’s pure sprinting stage won by Cavendish, today was a pure climbers stage, packing several climbs before the finishing climb up the Grossglockner such as the Passo do Monti at 79.6km, the Gailbergsattel at 99km and the Iselsbergpass at 127km

At just about 55km to go, the break was approaching the Iselsbergpass, which looked to certainly bust up this group a little bit. And the climb was getting respect from the GC favorites behind, as they were jockeying for good position on the earlier slopes. 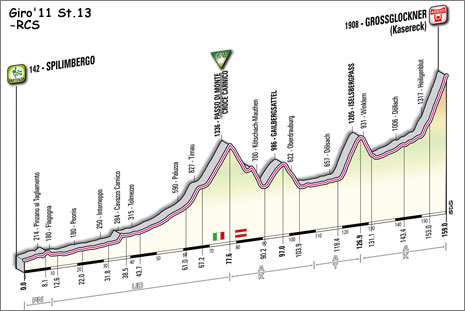 As the break reached the Iselsbergpass, Astana’s Kiserlovski took his leave off the front, making a daring solo move, but he dangled between 10 and 15 seconds there. Meanwhile, the entire break, or what was left of it as it began to shed riders, held a 3:15 advantage over the peloton behind. Euskatel, paying pennance for missing the break it seemed, was driving the chase and whittling the peloton down.

While Contador was expected to keep his nose clean so to speak and save energy for the coming days, some of the climbers further down the GC were certainly thinking stage win glory. The final 6 km’s of the Glossglockner portion AVERAGE 10%. Ouch. That hurts just writing that, much less riding it.

Over the Iselsbergpass, the peloton sat about 4 minutes back, while the solo rider Kiserlovski held just under a minute over the remnants of the break. He was blasting down the final descent, even though it was a bit rainy and wet, headed for the short valley ride before the behemoth of the Grossglockner started.

As the lone Astana rider hit the early slopes of the 20km long climb of the Grossglockner, he looked to be struggling a bit, and the chase was at 1:02 and the peloton was really chipping away at the break, now under 3 minutes. Along with the peloton bearing down, so was the rain. The roads were very wet, in contrast to the earlier parts of today’s stage. Them’s the mountains for you.

Hitting the climb in earnest now, the pitch went up and the gap was falling like a rock. The bunch was still being driven on by Euskatel, clearly working for Anton, and their pace was hurting a lot of riders. Kiserlovski was in a world of hurt now but maintaining his slight margin.

Riders from the bunch and the break were under pressure now, several were dropping out the back, done for the day.

The favorites just kept an eye on each other in the bunch, probably waiting for the steep parts to make some moves. The coming days had to weigh on their minds as well; there will be much climbing ahead. Garzelli, Scarponi, Arroyo, all were near the front and somewhat oddly, Contador sat more toward the middle of the group.

The group was less than a minute to Kiserlovski, and the break was somewhere between those two, faltering. Weening made a short burst from the shattered remnants of the break, but it was fairly short-lived as the cars were coming through and the bunch was bearing down on them. Sarmiento also joined him from the break, and Kiserlovski’s day was done as he was swept up. 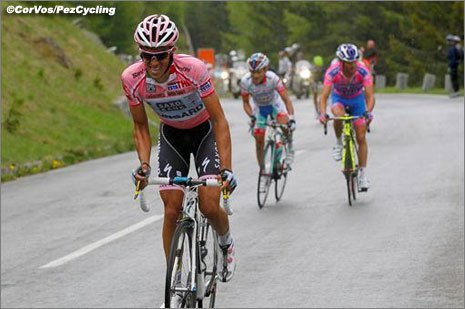 And finally, someone moved from the bunch – none other than Rujano! Anton made the pace behind, with Contador now in a more vigilant position at 2nd wheel. Sarmiento and Weening were swept up.

Scarponi then made a move and went to join Rujano..there was no move just yet from Contador. Maybe he was angling to give away the jersey until the Zoncolon? The accelerations had destroyed the bunch, which now numbered about a dozen. HTC suffered a blow with Suitsou getting popped as well. Cataldo was shortly popped too, as Scarponi, Anton and Rujano were away off the front, but only a short while as the group absorbed them.

And now Contador moved to the front and didn’t quite attack, he just lifted the pace and simply started to ride away from the others. Rujano was the only man able to make contact. Scarponi dangled behind them, suffering hard.

Menchov appeared as well to aid Scarponi, sitting behind the motoring Contador, who had Rujano stuck to his wheel. Menchov and Scarponi got some more help in the form of Eusaktel’s Anton.

Contador hit the slight downhill section and gapped the Colombian, Rujano. Race radio chirped out that Contador had 42 seconds on the chasers behind. Rujano rejoined the Spaniard and the two carried on. 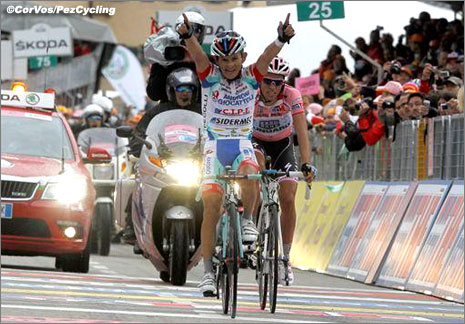 In the group behind, the riders looked resigned to their fate so Gadret and DuPont went ahead in chase. But it was so clear who the top man was in this race. Contador was motoring ahead as if with wings and just destroying the race.

Behind, Anton too made a move to limit the damage. But the damage was explicit. Not only was Contador crushing people now with a minute over the other GC rivals, the conditions were really rough in the cold and rain.

Under the final kilometer kite, Contador and Rujano came in, with Contador driving the pace for time. Rujano was clinging to the wheel hoping for the stage win, both men in the drops, racing side by side but Contador eased off a little bit, allowing Rujano to win the day! What a win for the little guy! 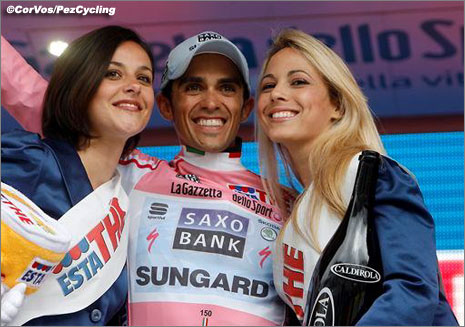 There’s no doubt who is the strongest here at this Giro….today’s performance has to leave the others scratching their heads as to how to beat Contador.