Race Report: Contador iced the 2011 Giro by stuffing another half a minute into his rivals in the short but steep time trial from Belluno to Nevegal. The other top riders threw everything they could at the Spaniard, but all their efforts were in vain as Contador crushed the course.

Today’s stage was a chance for anyone hoping to move up in the GC to make a hard effort. This short but brutal 12.7km individual time trial had one theme: up. Over that short distance the riders would gain just over 1,000 meters. Ouch, ouch, and ouch and a half. 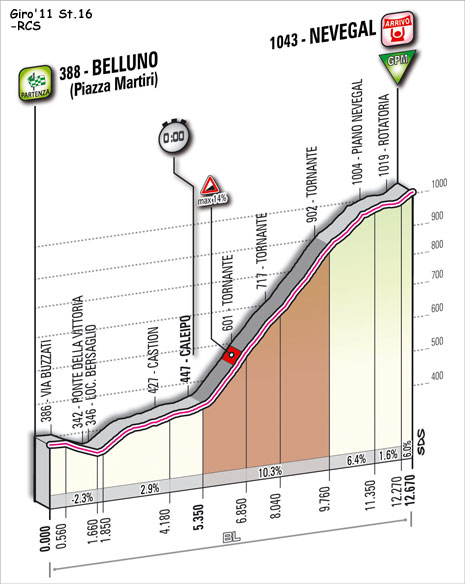 The course gave a little downhill right at the beginning, but then it only went up, and towards the end it really bit hard, with 10% grades thrown in, with a maximum gradient of 14% at one point.

The earlier riders put up reasonable times hanging around the 30 minute mark. And all were forgoing the aero equipment save for a few guys riding disc wheels. No aero helmets or bars, as they wouldn’t help much on this uphill slog. 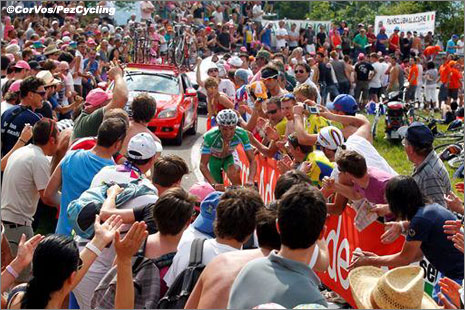 Pinotti set the best time of the earlier riders, until Stefano Garzelli came up and posted a 29:41 to move into the hot seat.

Rujano took to course, right after Menchov. Both men needed good rides today, but all eyes had to be on Contador. 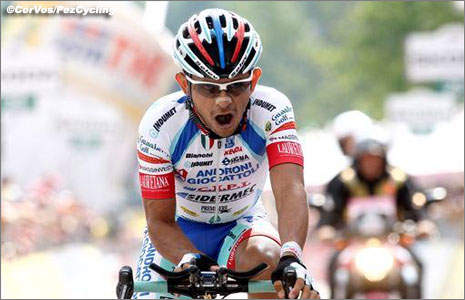 Sivtsov crossed the line with a nice top ten ride, slotting in7th, while Nibali took to the course. He’s ridden a valiant Giro, throwing everything he has at Contador, and we’d expect today to be no different for him. 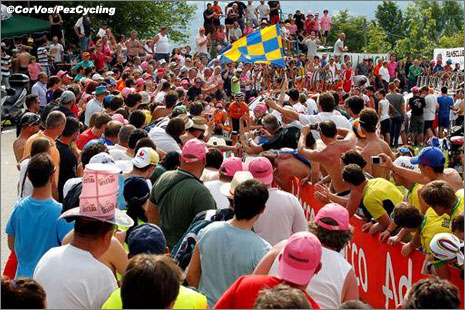 Igor Anton lost in the crowd.

Contador took to the road, head to toe in pink for the 7th day. Chasing after Nibali who was getting great cheers from the crowds along the route.

Kruezinger came home slotting in 2nd, just barely behind Garzelli. Menchov came in at 29:47 to slot 3rd. Rujano was having a great ride and he came in to knock Garzelli off the top spot posting a time of 29:34 and of course this TT suited his strengths. 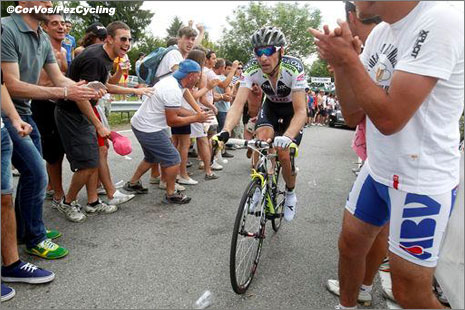 Scarponi rolled through one of the steeper sections, with about 8 pink-clad fans running alongside him. The team car behind blared the horn and the tifosi were a little too close for comfort.

Contador spun his high cadence and looked very comfortable. He had over 4 minutes to Scarponi and 5 minutes to Nibali, so he could afford to save a little strength, but he had his teeth in it and he was riding hard. The course was fairly short, but if someone were to have a bad day they could easily lose a few minutes. 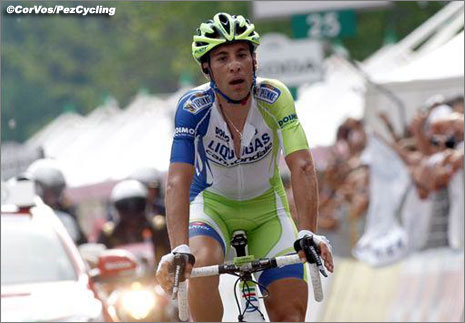 Scarponi and Nibali were both being willed up the climb by the throngs of fans in the steeper sections. They were certainly not giving up their fight, and the crowd was showing their appreciation.

Nibali was coming home first of the top 3, lurching and bobbing and stuffed with the effort, giving it everything. His ride was certainly good enough as he came in at 29:28 to beat Rujano by 5 seconds and take the top spot on the board. 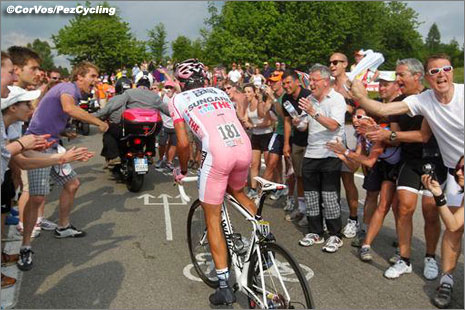 Scarponi was next to finish passing under the 1k kite and clearly giving it everything he had. Out of the saddle at 150 meters, his jersey wide open, he sprinted hard but just missed Nibali’s time by 4 seconds.

That left El Pistolero to bring it in, and at one k to go he looked smooth still, and his time seemed to be right in the wheelhouse. And sure enough as he came home over 30 seconds better than Nibali, thus extending his lead by another half a minute. The Spaniard is untouchable. 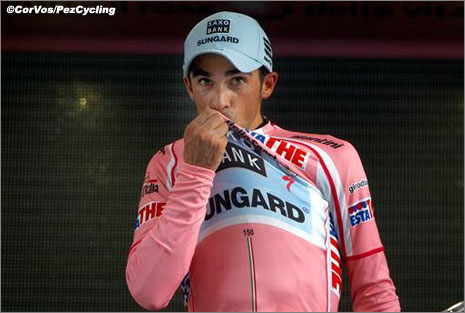 So our GC looks just as it did at the beginning of the day for the top 3, and with just 4 meaningful stages before Milan, this Giro looks all but iced for Alberto Contador.