Race Report: It seemed like it was going to be a simple, easy, quiet stage, but then the final 150 meters happened, and Italian Champion Giovanni Visconti made sure we’d be talking about this one for at least the evening. Read on!

The seventeenth stage of the 2011 Giro d’Italia started under bright and sunny skies on a perfect late morning in Feltre. The town, which sits on the border of the southern Dolomites, opened its arms wide to the riders as they set off on a long day westward, highlighted by the ascents of the Passo Tonale and Passo Aprica. Typically, at least one of these climbs would be associated with one of their big brothers: the Gavia or the Mortirolo, but the Giro organizers actually spared some kindness for the riders in Stage 17 and opted for a reasonable day, well, as reasonable as 230 kilometers can be.

There was no holding back as the race left Feltre. 48 kilometers were mowed over in the first hour, but like all things fast and difficult, there’s a breaking point – and that occurred shortly after the first hour – at the 55 kilometer mark. 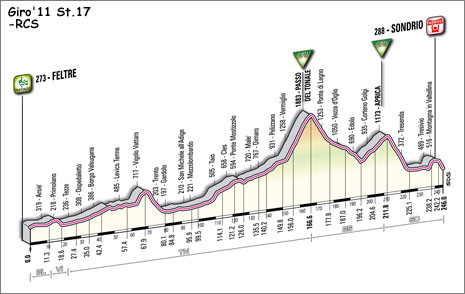 Sixteen riders wrested free of the tenacious grip of the field and began the long march to Tirano.

In other words – there was some excellent firepower in attendance, and that firepower was put to good use, as another 44 kilometers were covered in the second hour. Only Only 130-ish to go. With 125 kilometers remaining, the time gap had moved out to 5:50, 13 kilometers later, it was up to 7:30, whilst behind the chase was lackluster at best. This looked to be a break that had the makings of success, and Kanstantsin Sivtsov had to be feeling happy. His 12th place overall placing at the beginning of the day was suddenly getting better and better with each passing kilometer.

At the base of the day’s first big climb, the Tonale, Visconti’s Farnese Vini teammate, Leonardo Giordani, gave it a big dig for his team leader. And with that turn, he sat up, bid adieu to his breakmates and let the hard-charging field gobble him up.

Hard-charging? Liquigas took over the front from Saxo Bank and began to apply the gas. Sivtsov was gaining time at an alarming rate, and his ascension up the general classification ladder was inching closer and closer to Vincenzo Nibali. Unacceptable for Liquigas. The force applied by Liquigas didn’t put any of the favorites under duress, but the back end of the field shattered. Cue the gruppetto.

By the top of the Tonale, only one other break member had been dispatched: Addy Engels. The gap, however, had not changed all too terribly much – only down to 6:10. Interesting.

With 50 kilometers to go and only the climb to Aprica remaining, the deficit was still an almost improbable 5:45. It was at this point that Geox became a bit concerned, as Denis Menchov’s GC status was under attack from the front group. Cue Geox to the fore.

The climb to Aprica doesn’t read like much – it’s 15 kilometers long at the dainty percentage of 3, but it has been interesting in the past. Particularly back in 2006, when an ‘extraterrestrial’ Ivan Basso rode Gilberto Simoni off his wheel following the Mortirolo. Today, despite numerous attacks from stage hopefuls, only Garmin’s Christophe Le Mevel was shed. 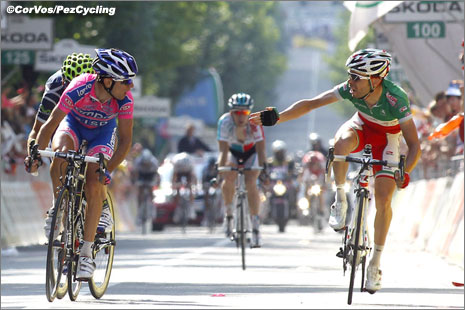 Ulissi, not in the slightest afraid of his elder breakmates, put in an excellent move inside the final kilometer, which was reeled in quickly. Typically, this would seem to spell the end for a rider, but Ulissi tagged back on to the group and re-launched inside 200 meters to go, and this time, he was right on. 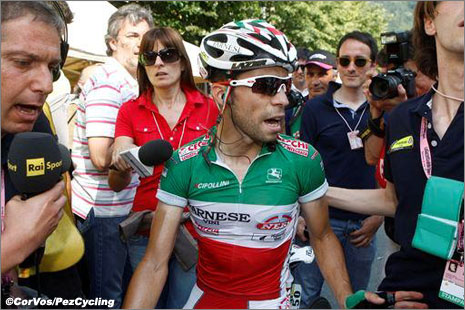 Visconti, however, was closing quickly, but for some reason, the Italian opted to go around Ulissi’s left, a space that would be measured in centimeters, and was closing rapidly. Had Visconti just gone right, the stage was his, no questions.

Unfortunately, Visconti went left, and Ulissi gradually closed the door on the star. Normally, that would be that, but Visconti wasn’t to be denied, he shot out a hand, moved Ulissi over, accelerated, and crossed the line first.

The jury decision didn’t take too long to follow, and Ulissi was awarded the victory. 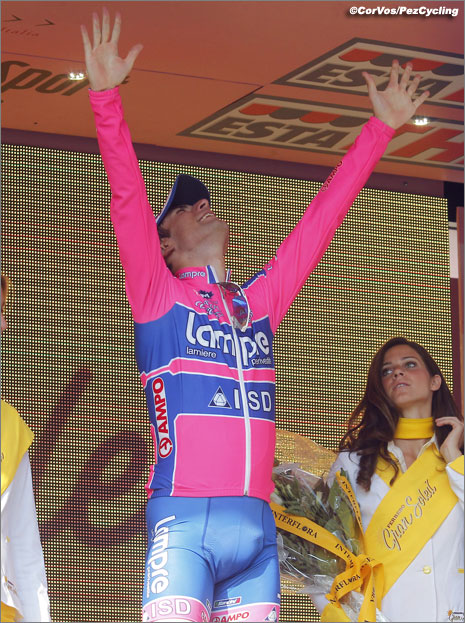 Behind, Kanstantsin Sivtsov rolled in ten seconds adrift, whilst the field followed just under three minutes later, which meant Sivtsov could wholeheartedly call his 10th place finish a huge success – he went from 12th to 5th overall. Good move.

For the top four, it was status quo.