Race Report: He’s Italian, tall, dark, handsome, smiles a lot, looks cool on a bike; just a pity about the palmares – but Liquigas’s Eros Capecchi went a long way to rectifying that short coming with a classy win in today’s 151 kilometres Giro d’Italia stage 18 from Morbegno to San Pellegrino Terme.

One of the three non sprinters who survived the break of the day, the tall man from Castiglione de Lago wanted the win more than his two breakaway companions – Marco Pinotti (HTC & Italy) and Kevin Seeldraeyers (QuickStep & Belgium).

And that was despite the stage passing through Pinotti’s home patch of Bergamo.

The affable Bergamischi must now think of the closing TT in Milano as his final chance to squeeze some individual glory from his obviously excellent form – his cheek bones threaten to burst through his skin. 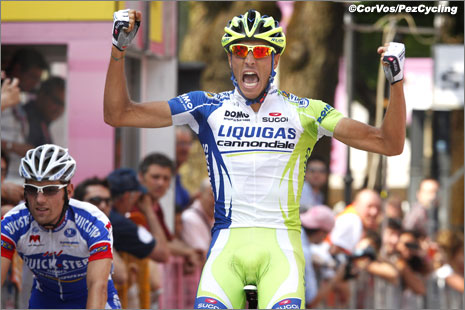 The ramp to the ‘Alta’ – the walled old town of Bergamo which sits atop an imposing chunk of rock – was where the break of the day finally went; after some 70 kilometres.

Arm chair pundits often say that the stage was; ‘boring, the break was away when the race came on TV then it was gradually pulled back.’ 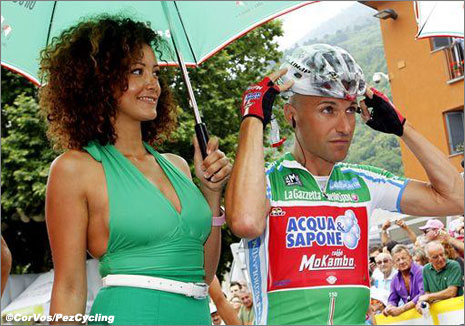 What they don’t see is that the first hour of racing is very often madness – especially in a race where the next three days have two mountain top finishes and a time trial in store – as the teams with no scalps on their belt seek to save their Giro. 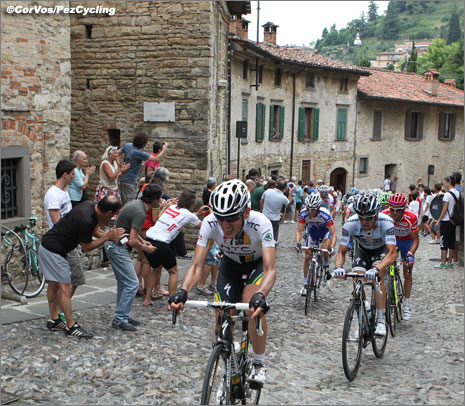 The rubber band getting close to its snapping point.

It was Philip Deignan (Radio Shack & Ireland) who lit the blue touch paper in Bergamo and the break of the day formed around him, some 20 strong.

Carlos Sastre (Geox & Spain) was there; scarcely recognisable as the man who won two epic stages in this race just two years ago.

By the cat 2 GPM Passo di Ganda at 120 K there were just six left who could dream of glory – Capecchi, Pinotti, Seeldraeyers, gutsy Russell Downing (Sky & GB), Jerome Pineau (QuickStep & France) and Gianluca Brambilla (Colnago & Italy) but Capecchi’s brutal pace setting on the climb did for the latter three. 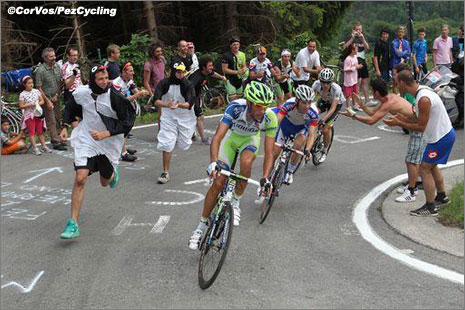 Off the hill the three survivors knew that it was cooperate or succumb; and with Pinotti’s TTT skills and Capecchi’s inspired riding there was little doubt that this was the move.

Until the last kilometre that is, where it was Pinotti counting on his strength and launching a last kilometre ‘Ekimov Effort’ but Capecchi was too vigilant, won the sprint then promptly laid himself out on the tarmac – those Italians!

Capecchi was tipped for the very top in his early years; Italian junior road race champion in 2004, within a year he was a stagiaire with Liquigas.

There was promise but little progression with the Italian squadra and in 2008 he joined Mauro Gianetti’s Saunier Duval team. 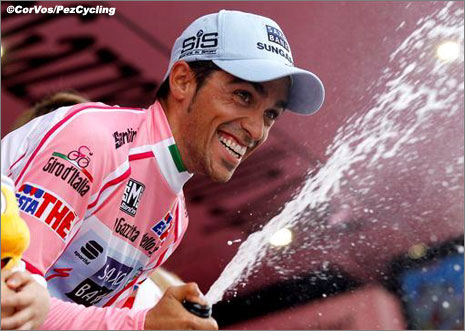 What else is there to say? Contador continues to reign supreme.

It seemed to be the right move with a stage and GC win in the Euskal Bizkleta; but staying with the Spanish team – by now Fuji-Servetto – for 2009 the podiums were scarce.

The same could be said of 2010 – Footon-Servetto – and this season he was back to his original ‘home’ at Liquigas.

This year he has ridden strongly in the Tours of San Luis and Sardinia but today was undoubtedly the best win of his career.

Perhaps it will inspire Vincenzo?