Race Report: One last day in the mountains, one last monster climb, one last mountaintop finish, and then it’s into Milano for the final time trial and the finale to a race that lived up to the hype – the hardest Grand Tour in memory. Let’s see how it went down on the dirt of the Finestre and the finale to Sestriere…

Today’s final ball-buster of a stage, all 242 kilometers of it, took the riders from Verbania southwest to Torino and into Italy’s western Alps for the Giro’s second visit to the dirt brute of the Colle delle Finestre followed by the final mountaintop finish of this year’s Giro – Sestriere. It was the 100 year anniversary of Sestriere’s first inclusion in the Giro.

In short? There would be a whole lot of nothing going on until about the 196 kilometer mark. The drama would unfold over an insanely difficult final 46 kilometers. 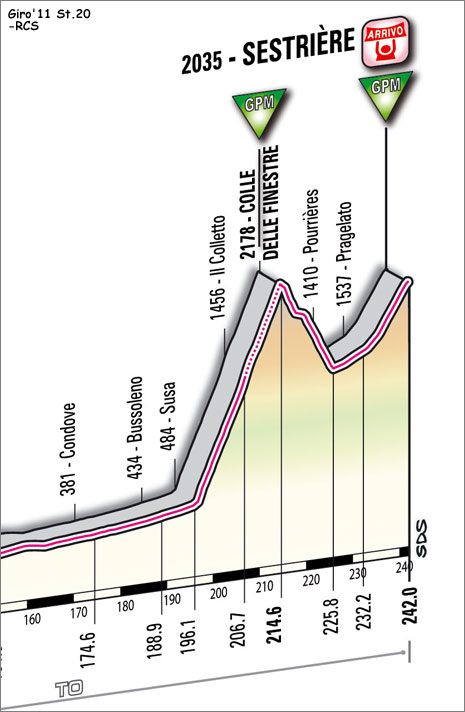 Unsurprisingly, the move got a healthy gap – over eleven minutes at its largest – and from there, with the Finestre rearing up in the distance, the gap fell steadily as the race hit its final showdown. 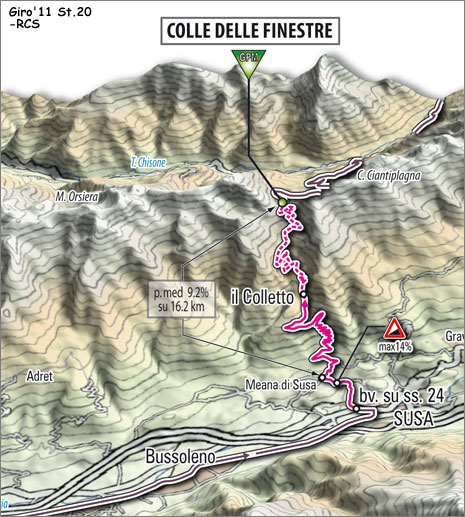 At the foot of the Finestre, the gap was down to under five minutes, and it took no time at all before Jose Rujano and another serial attacker, Pirazzi, put in the first attack. Both were brought back in first order, but Rujano was insistent in his aggression…and went again.

Behind, Liquigas and Rabobank were just as insistent in not letting Rujano float away, well, I don’t know if float is a good word to use for something like the Finestre.

When Rujano was brought back for the second time, the field was dutifully broken down into a more bite size portion – less than two dozen.

Up ahead, Movistar’s Vasili Kiryienka was alone at the front. Unsurprisingly, the powerful Belorussian had left his breakmates in his wake and was plowing his way upward at an impressive rate. 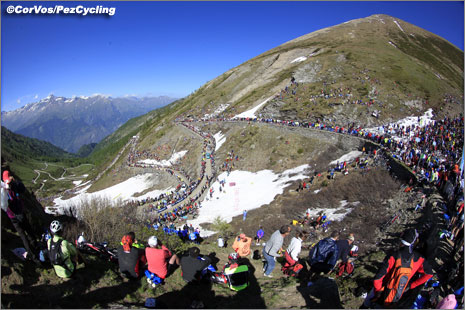 The crowds were waiting.

Back in the tiny front group, the faces of agony were apparent at the rear, whilst the favorites were stoic at the head of affairs.

Amidst the pace, which had reduced the front to half of its previous two dozen count – Jose Rujano went AGAIN. The Colombian has enjoyed a renaissance at this year’s Giro, and he was obviously intent on rekindling the first time the Giro visited the Finestre – he won that day.

At long last, Rujano had his gap, and he set off on a solo escapade, gobbling up the remnants of the once powerful break as he pushed ever higher.

As the race hit the defining dirt section of the upper part of the Finestre, Kiryienka was struggling, Rujano was flying, and the Giro’s best were not far behind. Speaking of behind – the difficult slopes of the Finestre were putting some of the prominent names in this year’s Giro in a large chunk of bother – notably Roman Kreuziger, Mikel Nieve, and Igor Anton.

Vincenzo Nibali was clearly hoping to dislodge Michele Scarponi from the top spot, and he had firepower in teammates. With 30 kilometers to go, the Sicilian had two teammates driving the pace, doing whatever they could to put Scarponi into trouble.

They couldn’t budge Scarponi though. He stayed strong, and soon, Nibali’s teammates were gone.

As the climb neared its thankful end, Kiryienka had just under four minutes to Rujano, and just under five to the Giro’s heads.

And just as some might have been breathing a sigh of relief that they had made it to the top unscathed, Joaquim Rodriguez erupted out of the group, leaving shrapnel in his wake – Vincenzo Nibali was tossed aside immediately, whilst the previous solid Scarponi was in a bad way.

Over the top, Kiryienka was sovereign in the lead, Rujano chasing, then Betancourt from the break, and then the heads: Rodriguez, Contador, Gadret, Kruijswijk, Menchov, and Scarponi – with Nibali almost half a minute behind, and Kreuziger still further back. Things were looking good for Scarponi as well as Kruijswijk, who was looking to inherit the white jersey as best young rider.

No worries for Nibali though. Nibali descends like a cannonball. 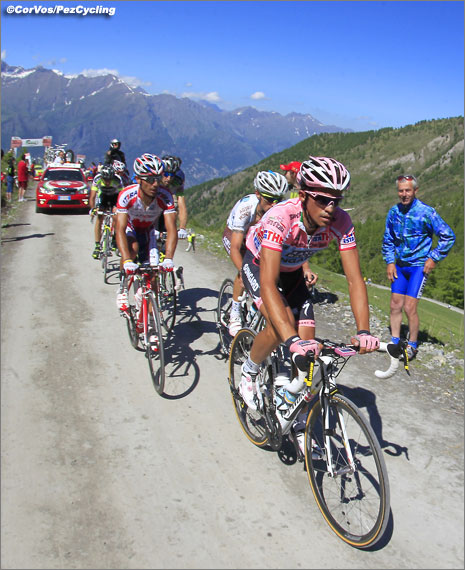 That gap was quickly erased and not only erased – Nibali saw it through and attacked. It didn’t go anywhere, but there’s no doubting the tenacity of the Liquigas leader. That’s for sure.

Ahead, Rujano’s descent wasn’t one for the ages, and he was caught by Betancourt…and then passed. Oops.

Nibali wasn’t the only one to regain contact on the descent – Kreuziger managed the feat as well, staving off a disaster of a climb on the Finestre with an excellent downward trip.

With the descent of the Finestre complete, Rodriguez attacked again, but this time, he got it right, and this time, it was on the final climb – to Sestriere. Rodriguez rapidly gained time, putting in a minute on the leaders behind. Rodriguez’s power put a number of GC spots up for grabs, and of course, drew them out – the likes of Menchov, Kreuziger, and Gadret were pressured to act. Menchov attacked, followed by Gadret, in turn followed by everyone who could follow, which was everyone save the two that struggled all day: Kreuziger and Nibali.

While the GC battle raged behind, Kiryienka crossed the line in triumph hands aloft, eyes to the sky, in memory of his lost teammate, Xavier Tondo.

Rujano crossed the line at 4:43, with Rodriguez only seven seconds behind him. The favorites followed just over a minute later. 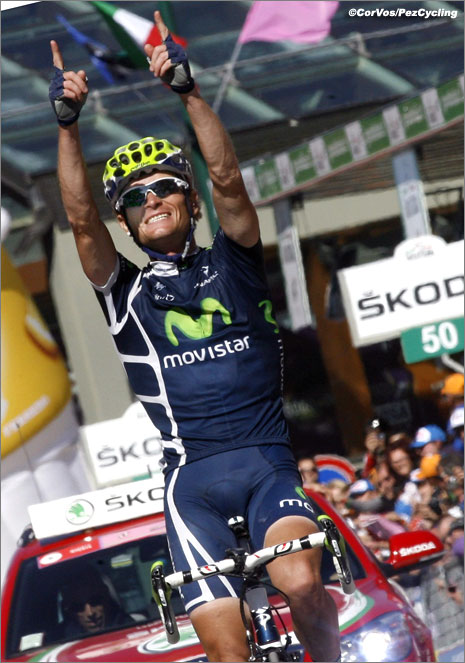 Kiryienka takes the win and aims for the heavens to salute his teammate, Xavier Tondo, one of the most amazing people you could ever have hoped to meet.

At the end of one last incredible day, Rodriguez’s efforts had vaulted him forward from 8th overall to 5th, and Rujano from 10th to 6th. Their headway mattered little for the four at the head of the race though.

Contador continues to reign supreme, while Scarponi picked up a couple extra seconds on Nibali, giving him plenty of breathing room for tomorrow’s finale in Milano. Gadret was once again solid as well – his GC spot should be more than safe with Joaquim Rodriguez his nearest rival, also one of the worst time trialists around.

Menchov and Kreuziger, 8th and 7th respectively, are only a scant few seconds behind Rujano and Rodriguez though – they’re spots on GC will be in extreme danger tomorrow.