Race Report: After twenty stages and countless meters of vertical ascension, the final day concluded with a flat time trial in Milano. The overall win was never in doubt, but there were some intriguing mini-races within the final day. Read on!

The time that would nearly stand the test of the vast portion of the day was set by HTC-Highroad’s powerhouse, Alex Rasmussen, on a bright, perfect late May day. The big Dane went off extremely early and stormed the course – a flat in the final kilometer was the only thing that could slow his motor. 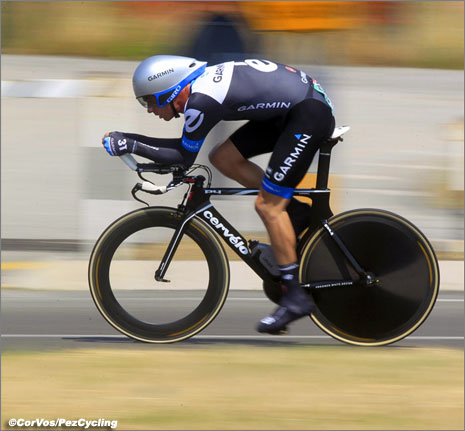 That flat would prove costly for Rasmussen, as Garmin-Cervelo’s time trial specialist, David Millar, would beat Rasmussen’s time by a slim seven seconds.

Millar and Rasmussen battled for the top two spots, while the rest of the time trial specialists came out for a big dig on the final day, including the likes of Richie Porte (4th), Jos Van Emden (6th), Cameron Meyer (7th), and Patrick Gretsch (8th). 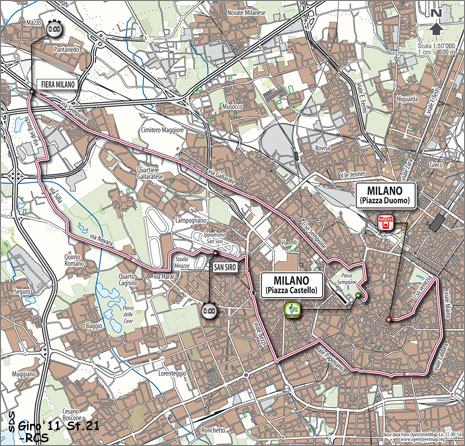 Mixed in there, of course, were the riders vying to defend or usurp general classification positions. There was no doubting Alberto Contador’s spot – the only question was how hard would he ride? Would he go for the final stage win? He answered that with a resounding yes through the first time check – he bettered Millar’s time by a second and looked primed to go for the win, but Contador eased off the throttle after that first display of power and enjoyed the rest of his victory lap around Milano to eventually finish third on the day, 36 seconds behind Millar. 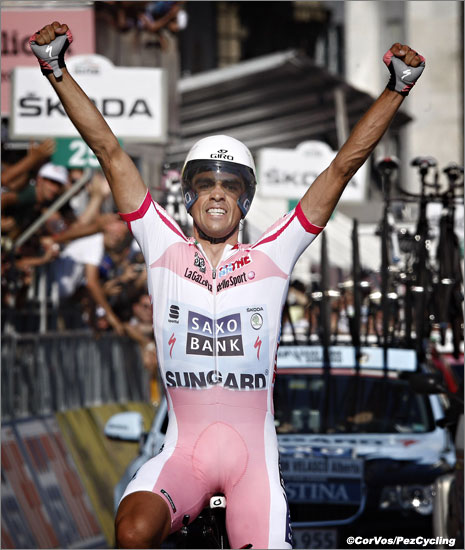 Behind, Vincenzo Nibali and Michele Scarponi waged their last bitter battle for the second highest step on the final podium. Nibali is regarded as a slightly better time trialist, but with his almost minute deficit to Scarponi, it would take a miracle of a final 31 kilometers around Milano to wrest second place from Scarponi. He didn’t get it. Nibali managed to scare away a few ticks on the final overall clock away from Scarponi, but not nearly enough – only ten seconds.

Further back on general classification, Jose Rujano unsurprisingly lost his sixth place position to the Giro’s best young rider, Roman Kreuziger. Rujano might have dropped further had Denis Menchov not suffered a horrendous day on the time trial bike to finish 35th on the day. Eighth place would be his final dwelling on the overall classification – a disappointing result from last year’s Tour de France third place finisher. 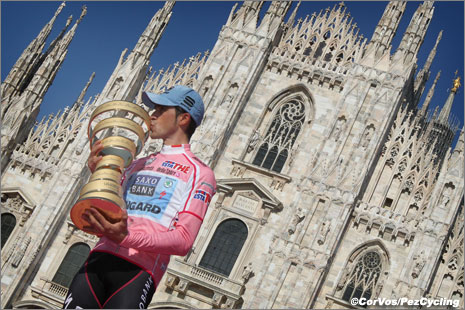 With the day’s results sorted, there wasn’t much left to do but celebrate the man whose fate is still as murky as a March morning on the Turchino.

Contador’s win was unquestionably one of the more impressive in recent history and his sixth career Grand Tour triumph, but it could well be erased when the CAS rules on his case (whenever that may be).

If Contador loses his case with the CAS, I think we can say that there was unquestionably a next best man in this race – Michele Scarponi.

For now, I’m happy to enjoy the podium we saw, content to call Contador the winner, and if he’s dethroned, then please, Scarponi, take that next step up, Nibali to second, and Gadret to third.

It’s not worth wasting any more breath on. As the cliche goes – it is what it is, and it was a beautiful Giro.