Following a day of mourning for Wouter Weylandt that no one will ever forget, racing commenced anew today on the Tyrrhenian coast in Piombino. From the beautiful coastal start, riders headed inland for 191 difficult Tuscan kilometers to Orvieto with climbs and the dreaded Strade Bianche. 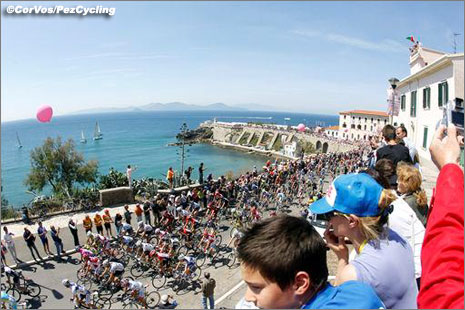 BMC’s Martin Kohler became the second rider of this year’s Giro, after Omega Pharma’s Sebastian Lang, to head out on his own for a lengthy solo escape. The powerful Swiss moved clear early in the first hour of racing and eventually amassed a lead of nearly 13 minutes.

The huge time difference put Kohler into the virtual lead, but there was little worry in the field, as the latter part of the day’s racing would ensure that Kohler’s chances of victory were nada. 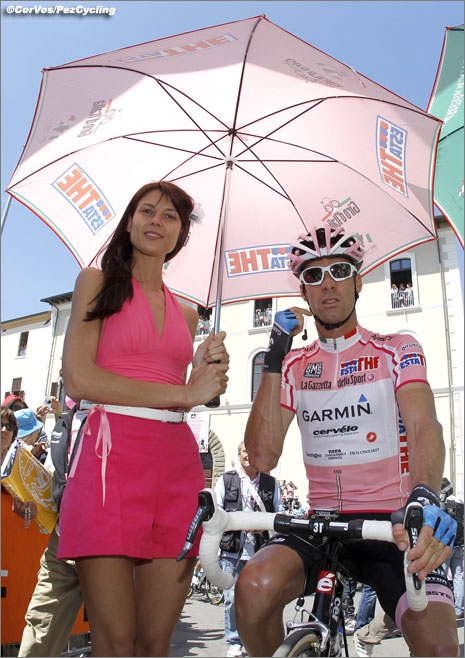 David Millar enjoys some nice shade at the start.

With the gap at its zenith, Garmin-Cervelo came to the fore and began their due diligence at the head of affairs to protect David Millar’s tenuous lead. Not long after, Millar’s grasp on pink took a tumble when he collided with second place overall, Angel Vicioso (Androni Giocattoli) as the two battled for the valuable intermediate sprint time bonus.

Both escaped their tumble with nothing too significantly awry, but their crash seemed to trigger a flurry of falls in the kilometers to come.

Once Millar and Vicioso rejoined the still large peloton, the racing began in earnest. Five riders jumped clear, but Garmin-Cervelo had things under control – there would be no mistakes heading into the decisive finale. 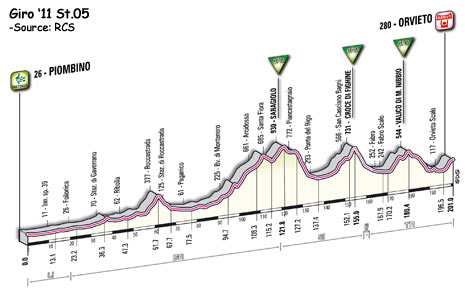 A lumpy, bumpy trip through Tuscany.

Well, there would be, Garmin just wasn’t hoping to make any of them. Coming down the day’s first categorized ascent 120 kilometers in, Chris Butler, Richie Porte, and Ivan Rovny all hit the ground on the fast, winding, beautiful descent from Saragiolo.

With 50 kilometers remaining in the stage, Kohler still had over seven minutes, while the major general classification riders all steamrolled to the front. The Liquigas (Nibali), Saxo Bank (Contador), and Lampre (Scarponi) teams were all prominent on the heels of the still hard working Garmin-Cervelo team.

Of course, there was another crash involving Montaguti (AG2R) and Bozic (Vacansoleil), but after that, it was on to the dirt.

The top teams all did their best to assert their dominance at the front – in a short period of time, the lead passed between Garmin, Movistar, Lampre, and Liquigas. It didn’t need saying – the Giro’s first really intense racing was about to begin. 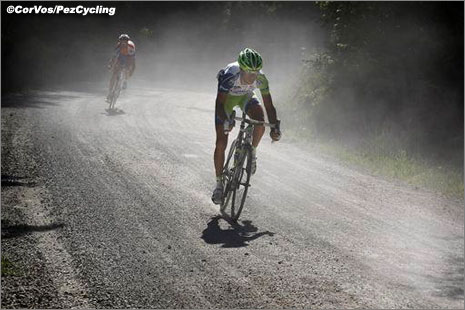 Vuelta winner Vincenzo Nibali went on the attack, but couldn’t make anything of it.

Unfortunately, he didn’t get far. He came back into the fold at the behest of Astana, and it was Astana’s team leader, young Roman Kreuziger, who led the race over the field that was losing riders faster than a (insert metaphor here).

Vincenzo Nibali dutifully accepted his role as one of the world’s best descenders and put it to good use when he attacked on the descent Croce di Fighine.

The Vuelta a Espaсa champion flew/picked his way down the tough descent. As the race returned to paved roads, Nibali was joined by Pieter Weening, and soon after, the rest of the remainder of the peloton.

Another move followed in quick order – this one made up of Bram Tankink (Rabobank) and Przemyslaw Niemec (Lampre). The duo became a solo when Niemec came in a bit too hot through a turn and found his time in the break over, when he came to an almost complete stop. Niemec was replaced by Quick-Step’s Dario Cataldo. The move was solid and dangerous.

25 kilometers remaining and Kohler’s lead was down to only 120 seconds. The two chasers were coming quickly, and David Millar was losing time.

One final dirt road section remaining – 9.5 kilometers of a little bit of everything: flat, uphill, downhill, and many a turn.

Tankink and Cataldo were making good progress on the ailing Kohler, but then their move fell to pieces in the span of moments: Tankink dropped a chain and Cataldo flew into a ditch when he entered a tenuous turn with a bit too much speed.

Behind, the move of the day formed: Pieter Weening attacked with cyclocross star, Jon Gadret, and the two set off to manage what the previous duo couldn’t – finally catch Kohler.

Not long after returning to pavement, they made the juncture with Kohler, whilst behind, David Millar put on a brilliant display of outright defiance to get back in contact with the decimated peloton.

When the peloton hit pavement again, another rider actually did hit pavement. Rabobank’s Tom Slagter went down in a frightening looking crash, but luckily the Giro’s medical team was on him quickly, and it was apparent that there was movement. It was a sickening moment of fear for a cycling world still completely reeling from the loss of Wouter Weylandt.

Up ahead, with 10 kilometers to go, the trio only had an eight second gap. They looked to have a chance bordering around nil, but things changed considerably when Weening, a stage winner at the Tour de France, attacked his erstwhile companions at the 9k to go mark, and took his own fate in his hands. 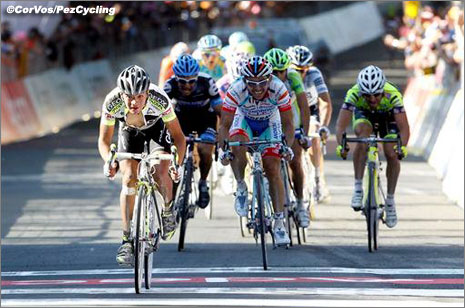 The gap pushed out quickly, and with 3k to go, Weening had two thirds of a minute.

As the race hit the final climb into Orvieto, the swell from the favorites brought Weening’s lead into question, but it wasn’t enough – the Dutchman had it, and he crossed the line a happy man – taking his second Grand Tour victory, almost six years after his first in the 2005 Tour de France. 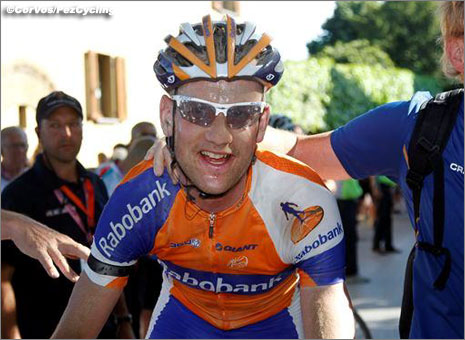 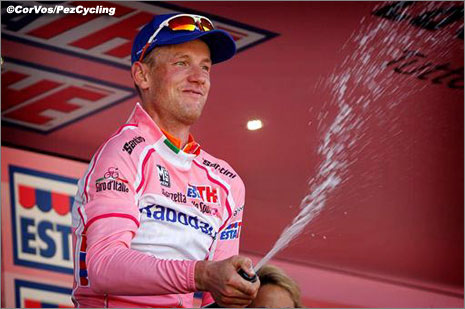 It looks like all the general classification contenders made the cut: Nibali, Contador, Scarponi, Rodriguez, and Kreuziger all finished in order from sixth to tenth.