Race Report: Movistar’s Francisco Ventoso continued an excellent season with the win this afternoon following a lumpy stage and a tough gradual climb to the finish in Fiuggi Terme – the sprint, like most everything in this year’s Giro, was one to be watched, then watched again, and again. Not for the typical reasons either, mind you. Read on.

The Spaniard appeared to have involuntarily led out the sprint for points leader, Alessandro Petacchi. In an absolutely agonizing final one hundred meters where both riders appeared to be on the verge of explosion, Petacchi kicked late, pulled even with Ventoso, and looked set to take it with ease, but then sat down in the final meters, handing the win to the 29 year old from Cantabria. 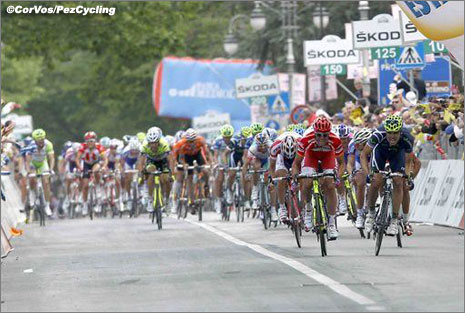 It was a bizarre moment, but judging by Petacchi’s slump to the ground just after the finish and then confirmed moments later in his remarks: he didn’t have anything after chasing down an early sprinting Di Luca. I think it’s safe to say that Ale-Jet just plain ran out of gas.

For Ventoso, today’s win marks his fifth of the year and his second Grand Tour stage victory after a win in Stage 3 of the 2006 Vuelta a Espaсa.

Rabobank’s Pieter Weening enjoyed a quiet day in the Maglia Rosa, and with his field finish today, will head into tomorrow’s first mountaintop finish at Montevergine in pink. The HTC-Highroad duo of Pinotti and Sivtsov are only two seconds back, while Garmin-Cervelo’s Christophe Le Mevel lurks at five ticks. 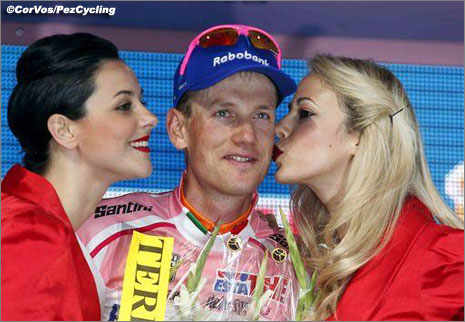 Let’s Go Back
Today, the Giro continued its southward march to its date with a giant, currently active volcano on Sunday. Before the ardors of Etna are to be endured, a few key stages lie waiting, and today’s up and down journey from the beautiful Umbrian town of Orvieto, past Rome, to Fiuggi Terme, was anything but simple, especially the final kilometers: racers would meet a five kilometer, 4.4% climb to the 5k to go mark, followed by rolling hills, and then the final 500 meter, 4% rise to the finish. Certainly nothing out of this world, but more than enough to put the sprinters into a deep, dark hiding spot in the oft mentioned, for sure cliched, pain cave. 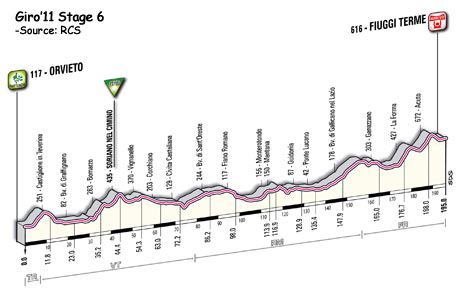 It didn’t take long for the trio to join the duo and voila, a quintet was formed. By the 20k mark, the gap was heading toward three minutes.

Both parties: field and break, settled into their day’s duties. The break did their best to get the most time they could before the fervor of the finale set in, whilst the field did their best to make sure the fivesome stayed relatively close. 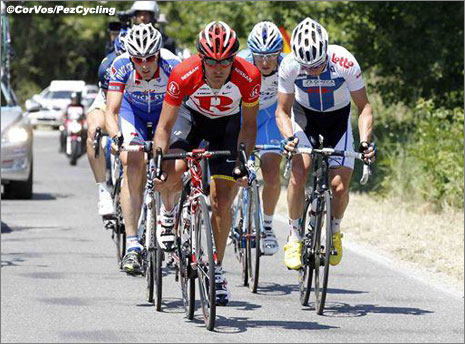 Up, up, up the gap went, but it never went over five minutes. It was around the five minute mark, with still 140 kilometers remaining, that the team of Maglia Rosa Pieter Weening, Rabobank, clocked in. Weening might lose the jersey tomorrow on the climb to Montevergine, but it most certainly wouldn’t be today.

Rabobank’s solid pace was only to defend the jersey – if anyone wanted a go at the stage, they’d need to take care of the hard part of the gap. Italian Champion Giovanni Visconti’s Farnese Vini team was more than happy to take up the yoke, and down went the gap. 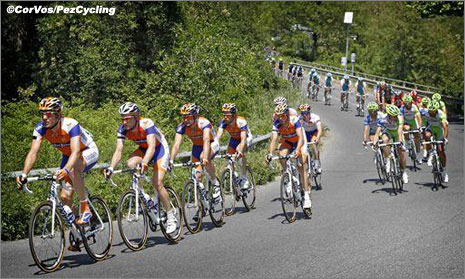 At around forty kilometers to go, young Modolo bid adieu to his breakmates and dropped painfully back to the field kicking and screaming, trying to get back on to terms with the escape, but eventually, he arrived back to the peloton, spent from his efforts. Behind, the gap had steadied out around the three minute mark.

The simple catch took a turn toward the not so simple as the race neared the finish. At 25k remaining, the break was still at 2:30 minutes – the oft-cited, tried and true formula of a minute for every ten kilometers was getting a workout at this point.

A renewed effort from the field and some concerted efforts from Visconti himself lowered the gap to a more manageable point, but it was at this point that the Colnago-CSF rider, Stefano Pirazzi set off to see about bridging the still almost two minute gap.

He never really had much of a chance, but with 15 kilometers to go, the break had somehow muscled to a 1:38 time difference – could it be? Could they do it?

Movistar and Androni were all dutifully driving the pace, but it was when Lampre and Omega Pharma added their own fuel to the burning bonfire at the front that the gap finally began to melt. With 10k to go, the gap was only three quarters of a minute, and the break’s demise was imminent.

Cue desperate solo attack out of the break.

There goes Kristof Vandewalle with 9k to go. Vandewalle labored hard, fought hard, pedaled hard, suffered mightily, but there was nothing doing – his long day out front ended with 1500 meters remaining, but not before voices were raised with an attack from the peloton behind from former Maglia Rosa, David Millar and young up and comer Jan Bakelandts made a desperate bid for glory. Then it was the turn of Emanuele Sella to give it a go.

It didn’t matter. There was a sprint on the menu, and all the attacks in the world weren’t going to stop the building wave.

Inside the final kilometer, Alessandro Petacchi had his ace leadout man, Danilo Hondo, at the tip of the charging field, but unfortunately, Petacchi wasn’t attached to Hondo. Recognizing this, Hondo swung off, and then it was the turn of the infamous Danilo Di Luca to make a huge acceleration.

Di Luca got a quick gap and in those first moments, looked like he had the win. 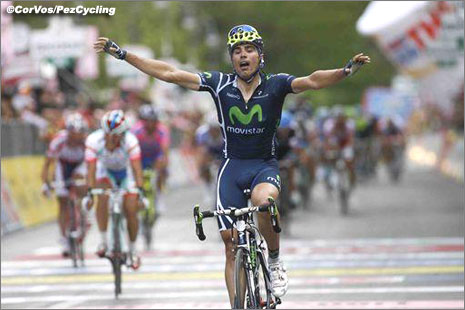 Unfortunately, Di Luca went a little too far out, and it was Ventoso who opened up the sprint in earnest, but still, it seemed too far out. Petacchi was on his wheel, Petacchi was coming around, get out the chalk board, here comes Petacchi’s next win.

Except it didn’t happen. The aerial view showed an even more incredible site – it looked like Petacchi had almost edged around Ventoso, but he appeared to have been the victim of a complete and utter melt down within meters of the line.

Giro Di PEZ: A Day In The Life Of A Fan