Pez Roadside: It’s an early start as we hit the Herning Motorvej for our trip to Silkeborg. But it’s worth the alarm call. The world champion is looking effortlessly cool in his gleaming rainbow bands, striding purposefully down the drive from the Scandic Silkeborg, and spirits seem high in the Team Sky camp. 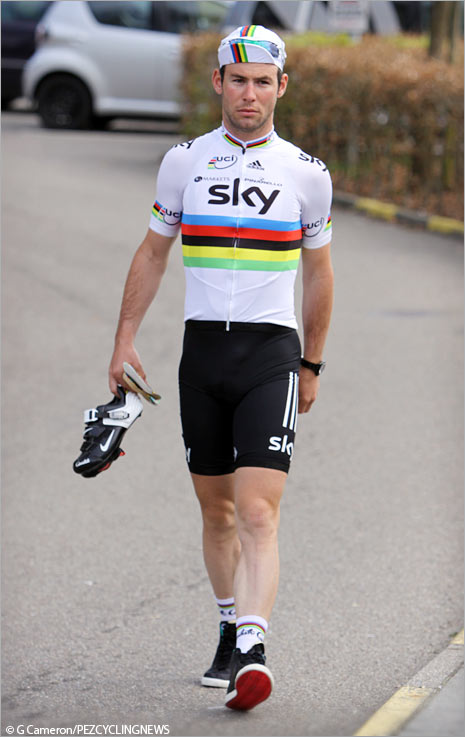 But first … the riders gradually assemble for the team press conference and there looks to be an intra-team sketching contest. Juan Antonio Flecha, cracking jokes, kicks things off with the outline of a tee-shirt and Bernie Eisel and Geraint Thomas take up the challenge, giggling at their handiwork until the page gets confiscated so that they’re concentrating on the task in hand. 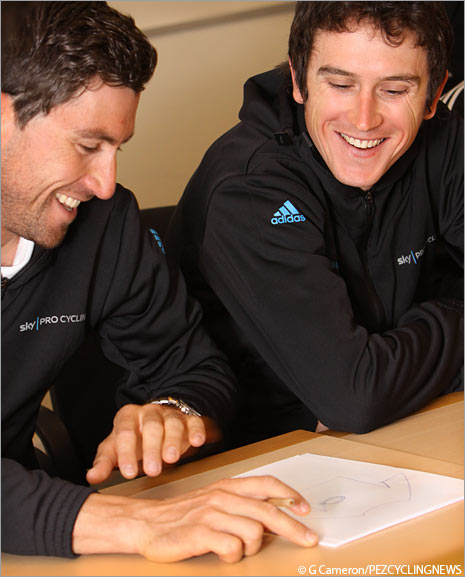 Everyone wants to speak to Cav so he’s given a pass for now. No questions to the champ until the rest of the guys have done their jobs and can leave. It’s an open five minutes of questions before the TV crews descend on Cavendish while Dario Cioni, a Pez pal, is the epitome of understated calm as he prepares to set up one-to-one interviews with other riders if requested.

Eisel takes a question about the possibility of splits in the field if the race turns nasty in Denmark. His take is blunt and makes perfect tactical sense. “If they want to take it on, good luck!” The idea is that those who rip it too early won’t be seeing the Stelvio in three weeks’ time. 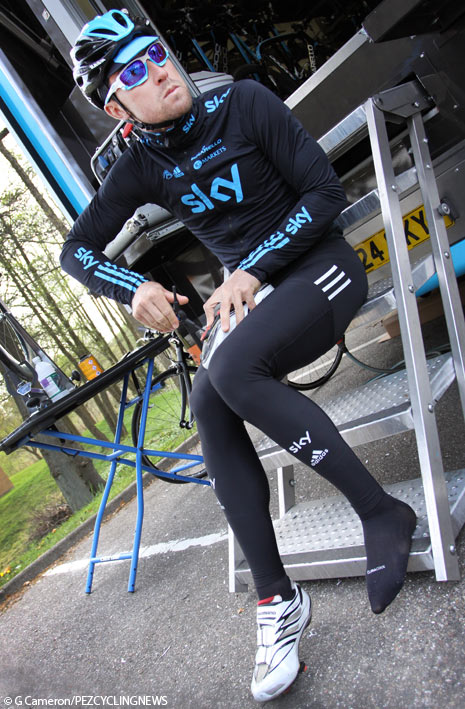 Another answer references Cav and Fran Millar, one of Sky’s PR staff, tells the World Champion: “You can talk if you want, Mark.”

The cheeky response is: “I don’t want to talk!” 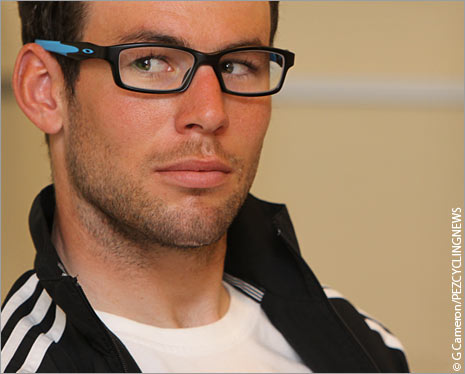 Flecha then takes a question about the dangers of the wind near the Danish coast over the weekend’s stages. He gives a very eloquent and lengthy answer and the more he talks, the more Cav sitting next to him smiles. A grin that gets wider and wider. 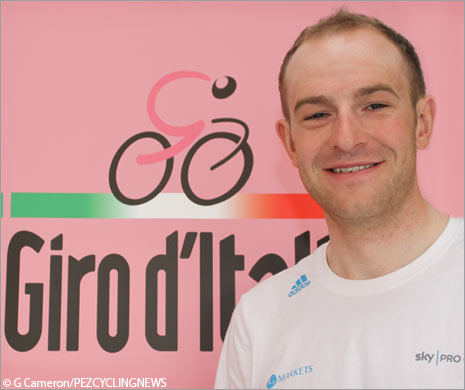 We leave Cav to the mercy of the TV crews and grab a five-minute sit down with one of Team Sky’s resident powerhouses, Ian Stannard. As a podium finisher in the Belgian Classics, this is a guy with phenomenal horsepower, and a lot of responsibility rests on his shoulders for the next three weeks.

Pez: The next three weeks are going to be hectic!
Ian Stannard: Obviously, we’ve got Cav here who’s really up for stage wins so we’ve got to put him in a place where he can perform. We’ve also got Rigoberto and Sergio who are interested the GC, it’s not easy to support them in the mountains but we’ll do the best we can.

Pez: The first three stages could be really wild and might suit your strength.
Ian Stannard: It’s going to be windy, as we’re heading down the Danish coast there’s no question about it. We’ve got to look after our GC guys so whether it goes full gas in those crosswinds like the Tour of Qatar where there are lots of Classics riders who really want to race … that situation probably isn’t going to happen as there are lots of teams with lots of different interests.

Pez: Ben Swift is injured, and now Jeremy Hunt is coming in as a late substitute …
Ian Stannard: He’s got loads of experience. It’s probably good not having it in the back of your mind a few weeks out! He probably got a call at 5pm last night and was on a flight at 6am this morning! Jez is great to have around the team, he’s great for morale. I’m really disappointed for Swifty, I’ve grown up with him, and it would have been nice to do a Grand Tour with him. 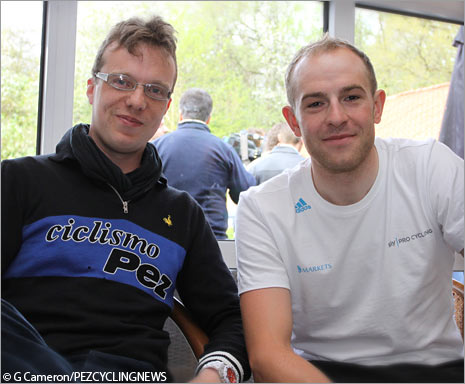 Pez: How will you look after Uran and Henao, your GC guys?
Ian Stannard: We’ve got the strength to protect them and look after them on the flat and give them the best possible ride in to the climbs. Once it starts going uphill fast, there’s only certain riders that are going to be up there, so they’ll pretty much look after themselves.

Pez: Tell us about your past Giro experiences …
Ian Stannard: It’s great fun racing in Italy. The crowds are dead passionate, the whole country is into cycling. I did my first Grand Tour with an Italian team and it was a great experience and I learnt a lot from it.

Pez: Do you have any personal ambitions for this Giro?
Ian Stannard: We’re here to win stages, that’s the main aim of the race for us. Everyone’s here to support Cav, but there might be an opportunity to get away on a transitional stage. But I’ll probably be concentrating on recovery as it’s not easy, it’s about giving the team the best support when we’re in the hills or on a flat stage where Cav can win.

I’m never going to be a top ten rider in a Grand Tour, or probably even a week-long tour! It may be just the odd stage here and there down the line. At the moment I’ve got a supporting role and I’m very focused and very happy to do it. 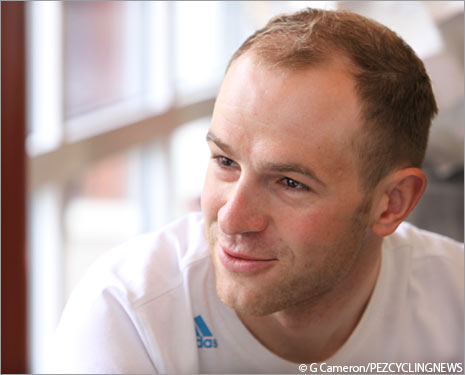 Pez: Geraint Thomas is a big favorite for the prologue tomorrow …
Ian Stannard: G’s just come off the track, he won the Worlds and is riding really fast over a short distance, so he’s got a really good chance. And for the TTT we’ve got a good group of guys for that, so it’ll be interesting to see how we go. 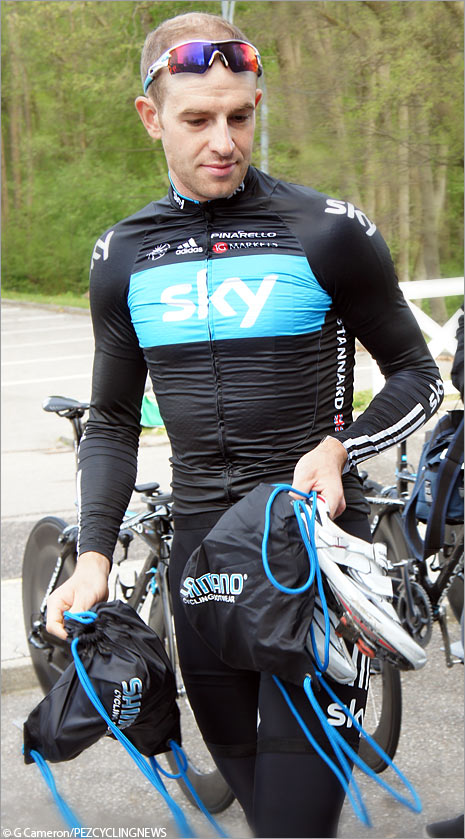 Pez: Who’s going to win the Giro? Basso? Scarponi?
Ian Stannard: I haven’t really been looking at their results, to be honest. I’ve just come here thinking about the sprint stages and my own job. I’m not saying it doesn’t interest me! But I haven’t thought about it! I’ve got something different to do.

Pez: Has fatherhood noticeably changed Cav?
Ian Stannard: I’ve known Cav for a long time now. Cav’s a great guy to be around. He’s sensible and he respects people. He’s got tons of experience and he’s really professional and analyses every aspect. The way he looks into a race gives him even more experience. He’s a winner and so just to pick up information from him that you might not have thought of is really great. 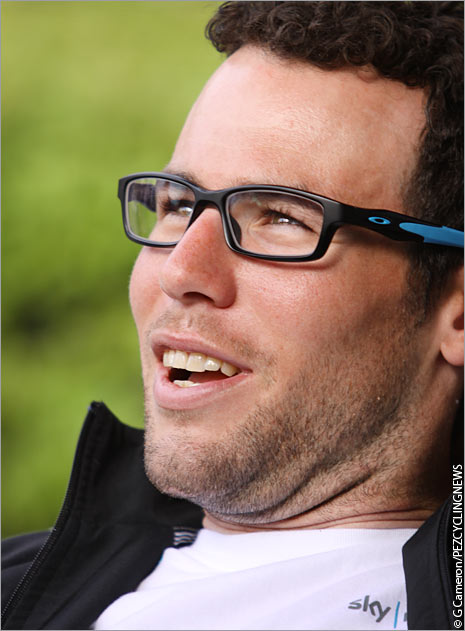 Pez: How do you deal with three weeks on the road? Is it better to blank it all out?
Ian Stannard: I don’t know whether it’s better … it’s just how I do it and how I get through!

Pez: So you just go from rest day to rest day?
Ian Stannard: Well, the first rest day is only after three stages! But it’s not really a rest day, to be honest. You’re not lying in your bed recovering. You’re travelling, getting on a flight, going to the hotel, you’re probably not going to be going out on your bike until three or four o’clock in the afternoon.

I take it day by day and don’t look too far ahead especially when you’re in the early stages otherwise you’re thinking: “Bloody hell! There’s still twelve days to go and look at all those climbs!” You can lose yourself in it! You just set yourself little targets, like individual races every day … like if it’s a mountain day, if you can get to a certain climb, then the gruppetto will form, or if I can get to that climb I can just ride dead easy to the finish and do my recovery ride that way. There’s no point looking too far down the road.

Maybe a GC guy thinks differently, like: “There’s a big climb coming up in three days!” For me, it’s day-by-day, and see how the body is feeling.” 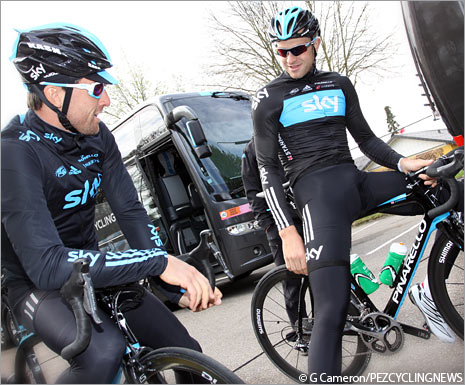 It’s time to wander around the car park. Curious onlookers and holidaying families are keeping a respectful distance until Fran Millar tells them that it’s OK to come closer. 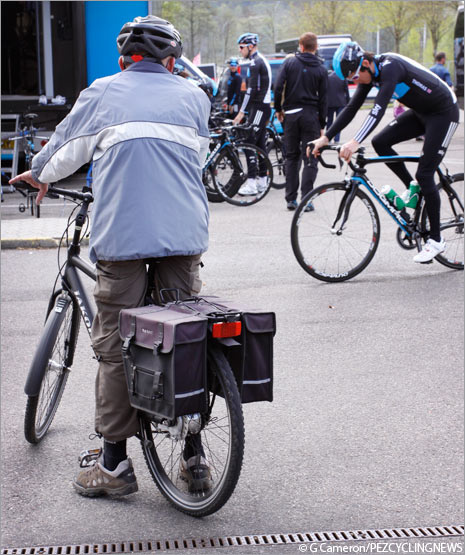 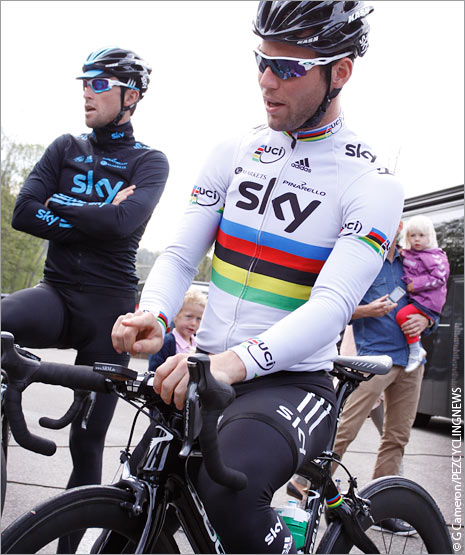 Pete Kennaugh is preparing for his Giro bow and cuts a lonely figure as he returns from a quick test run on his TT machine. 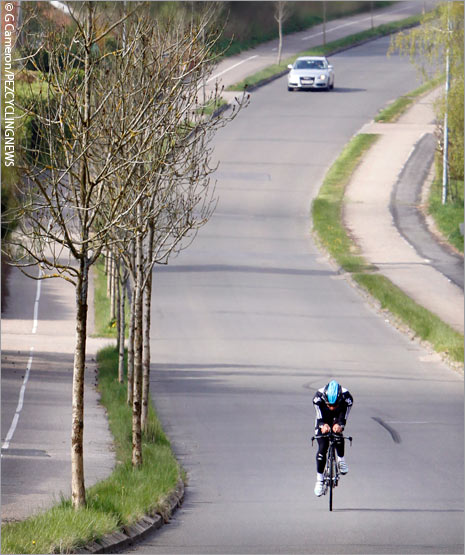 It’s like the curious case of Benjamin Button in reverse; there’s not that many years between him and Flecha. Whereas the Manxman is very fresh-faced, the roads Flecha has travelled, the rains, winds and heat he’s endured, are evident in his face. 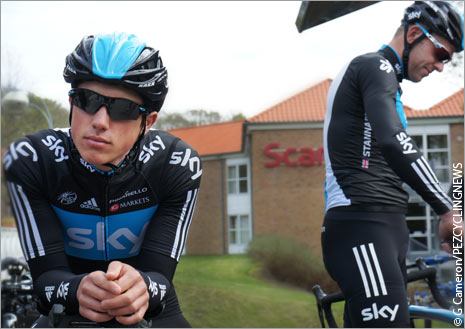 Now passing on his experience from a staffing position, former Giro stage winner Kurt-Asle Arvesen is looking to the next few weeks as a period of further consolidation and success for Team Sky.

Pez: How was riding these Grand Tours compared to seeing it from being behind the scenes?
Kurt-Asle Arvesen: Yeah, it’s pretty different to be on the other side, but I enjoy it. 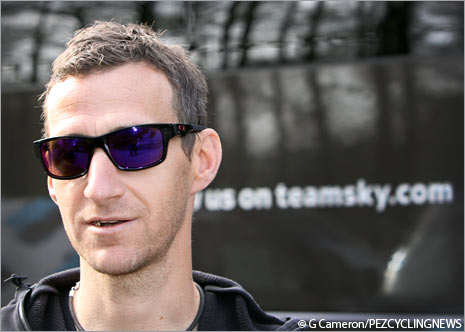 Pez: How have you enjoyed moving through the Sky set-up from racing to coaching?
Kurt-Asle Arvesen: We’ve come pretty far in a short time, and done some good things. All in two-and-a-half years. We’re in a good place now. You can see how the team is developing and what we did in Romandie shows that the team is strong. I think we have a good future.

Pez: Are you hard on the riders you work with?
Kurt-Asle Arvesen: I’m not hard on them! I just try to help them to do their best. It’s up to the sports directors to be hard on them! 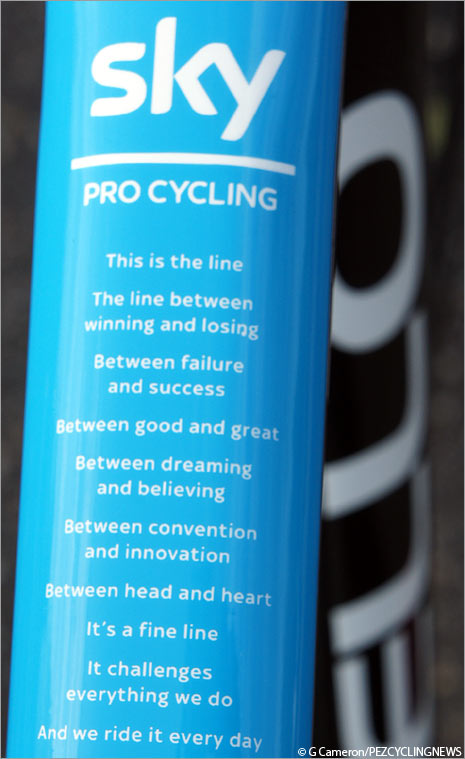 Pez: It could be an exciting day if Geraint Thomas wins the prologue tomorrow?
Kurt-Asle Arvesen: Hopefully he can do a good prologue tomorrow, and then we have some good stages for Cav. It’s sad that Ben (Swift) is out but that’s part of cycling.

Pez: Is there a worry about the flat stages? If they’re windy, could a climber like Rigoberto get into trouble?
Kurt-Asle Arvesen: We expect the worst and hope for the best! We’ve prepared for everything so I think we will be OK.

And, with that, the riders swing out of the Scandic Silkeborg car park, clicking into their pedals, and we’re back on the road. The teams’ presentation is on in Herning this afternoon. We’ll be there.