Race Report: A break ruled the day after the rest day while GC guys laid in wait for the coming dolomiti, but fireworks were all over the place for stage win hopefuls as Euskatel notched their first win with Io Izaguirre bagging a fine win! Read on!

After the rest day, today’s course was one riders would like, or hate. Described as a medium mountain stage, at 174km from Limone sul Garda to Falzes with continual rise on the elevation profile and a harsh little kicker at the end, today’s course would be a punisher. 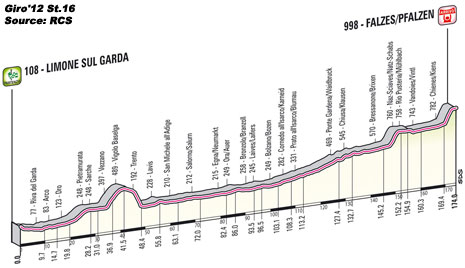 And sure enough, Mother Nature didn’t want to cooperate, as she provided cool temps and rainy skies at the start.

With no danger men in the break, and most teams represented, the break started racking up time and with just about 35 km to go to the finish, they had over TWELVE MINUTES in hand. The bunch seemed fine to let them go after such a furious start, as we could see the maglia rosa joking around at the back of the pack. Seemed the GC guys were content to let this stage go to the break.

The GC guys might want to mark each other on the final little climb into Falzes, averages 8.6% grade over 2.3km, including a lovely little section of cobbles and a little pitch of 12 percent. And this little lump was just 2km from the finish. But again, with the dolomites looming, the GC were mailing this one in today.

Katusha did their due diligence and had their guys on the front, but they certainly weren’t chasing in earnest.

23km to go, the break had 12:33 in hand, and they were in full team time trial mode.
Going up one of the little last climbs, the bunch was gutter-to-gutter. Perhaps a truce had come down from Purito that there would be no bullets fired today, or perhaps they were waiting for the last climb before Falzes to throw a few punches. The field was waking up a little bit though as Katusha again was doing their work, and with 13 km to go, they had knocked a little over half a minute off the break’s lead, to cut it to 11:30.

At about 5km to go, the break was single file speeding toward the final climb. Surely the attacks would start soon among the 10 men. An odd mix of riders up front with some climbers, some all rounders… it would be interesting to see who would play their cards and how.

Movistar’s Herada made the first move right at the base of the climb after a left turn, and the break was keen to get on the wheel, shutting it down. Euskatel’s Izaguirre snuck to the front and turned a pull into an attack, trying to catch the group unaware in a steep portion. That move strung the group out, but it didn’t seem to dislodge anyone at first. BMC’s Matthias Frank took a dig, the Euskatel rider covered it, and that seemed to finally cause some disorder as they managed a gap.

Izaguirre had enough in the legs and attacked, going alone, with BMC and Androni chasing. Then, Androni’s De Marchi went alone to get across to Izaguirre. His bridge attempt failed as the Euskaltel kept riding his hard tempo. It was looking pretty good for the Basque rider as Movistar and Frank caught up the Androni rider. Under 3 km to go, Izaguirre had maybe 15 seconds.

Meanwhile, behind, the peloton began riding in earnest, the break had the stage in the bag, but the gap was down to 9:30 as teams positioned their GC guys for the last climb.
Bits of the break re-formed behind Izzaguire but he was home free, taking the victory solo in fine style, with 14” in hand over his former break mates, punching his chest. 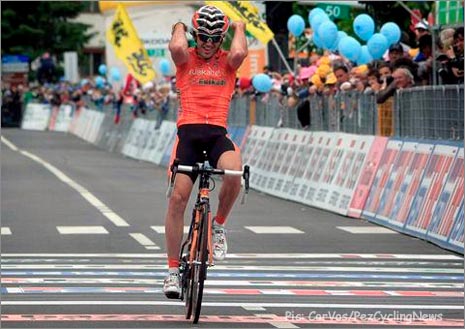 The GC guys were indeed shepherded to the foot of the climb, but it seemed truce had indeed been called a they raced across the road, all the favorites for the overall comfortable with a few lieutenants nearby. The rest of the group had fallen off, climbing at a more leisurely pace.

The big boys marked each other and basically rested today, allowing some lesser riders to get a shot at stage glory. But the big guns will be firing shortly as the Dolomites loom, with tomorrow’s 5-pass day to Cortina.