Race Report: As many would gave predicted, Garmin reigned supreme in the Giro’s team time trial stage four around Verona – with their Lithuanian rider Ramanus Navardauskas taking pink at the end of a tough, 37 minutes. 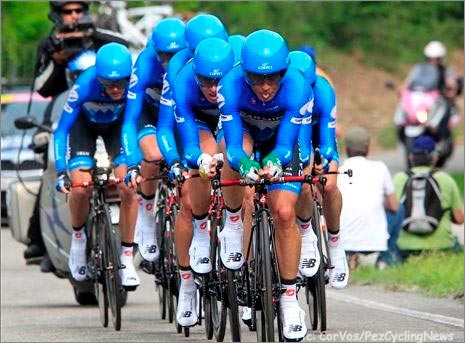 Always a threat in the Team chromo – Garmin-Barracuda delivered the goods again.

Tyler Phinney’s run of bad luck continued, as he first struggled on the race’s only drag then ran out of road to finish with foliage streaming from his rear mech, well off the pace.

The other big loser of the day was Garmin’s Dane Alex Rasmussen who was dropped by his rampant Garmin squad on the only drag of the day – had he stayed with the squad, he would have been pulling on pink, not Navardauskas.

Team time trials; in the Giro guide in this week’s Cycling Weekly it describes them thus: ‘For some, the TTT is cycling’s equivalent of watching paint dry; others find it a beautiful work of art in carefully-dosed teamwork.’

Include me in the latter, please.

The canvass for this particular masterpiece is the beautiful city of Verona with its Roman amphitheatre and place in history as the city of Romeo and Juliet. Long straights, generally flat and fast but with a few technical turns and one drag within the 33.2 kilometres, it’s a percoso for the specialist teams – Garmin, GreenEdge, Sky, Liquigas and BMC all spring to mind.

With the teams starting in reverse GC order, first team off is Ag2r – however distasteful it is to be last team on GC and starting whilst the crowd is ‘cold,’ the French equipe can’t mess around if they’re serious about putting Gadret on the podium for the second year running.

The weather is perfect, sunny, no wind as Ag2r go through the first check at just over 50 kph – that’s not going to do.

Scarponi’s Lampre squadra aren’t tidy, but Lotto come past neatly line astern. F des J drop down the ramp and get straight into a tidy line – but the French team isn’t expected to trouble the team keepers.

Lampre go top at check one, ahead of Ag2r and Euskaltel but that won’t last. Pozzovivo looks out of place in the Colnago line, it’s very difficult for a small rider to get an aesthetically pleasing position on a time trial bike and Domenico is no exception.

Katusha roll of the ramp, this is a day for Rodriguez to survive – minimise his time loss and not fall off.

Movistar next; they’re another team who just want it over and done with – Visconti will want a stage win, but not today.

NetApp might surprise today, some strong men in there, including Rund um Koln and Coppi Bartali winner, Czech Jan Barta – and don’t forget that they won the TTT in the Italian race.

Euskaltel aren’t having fun, under geared, moving around on the saddles too much, fighting for the wheel at the then of their spell.

Katusha go top at check point one after nine K, but that’ll go too – the heavy artillery will be pushing 60 kph. Saxo launch, as CSC they were TTT royalty.

Liquigas zoom off the ramp; the men in lime green have the discipline of a Roman Legion and a reputation to protect – it’ll be interesting to see their time at the first check.

Euskaltel scurry in – well, that’s over with and Ag2r won’t be last, at least. Rabobank go through check one – fourth and not enough pain on those faces.

Liquigas are a long, straight line; the twitches to correct position and cling to that tyre in front tell you that this is quick. 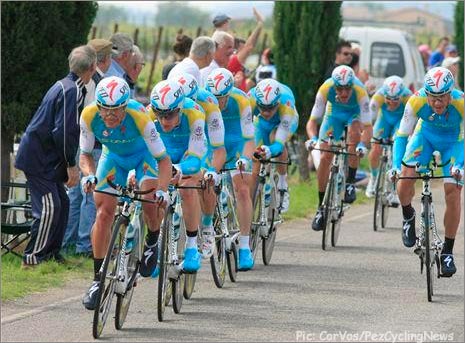 Astana don’t look great, maybe we’re seeing them on a tough part of the percorso.

Lampre with 37:38 at the finish, they go top and nudge 53 kph, not quick enough; but this is another team limiting losses – Scarponi’s time will come later in this race.

We get a quick shot of Cav psyching up – no rainbow bands, they belong to Tony Martin on a day like this. His cheek bones have reappeared and he was imperious on stage two – Sky will be thereabouts, today. Geraint Thomas leads them off; he’s a man who knows about speed – four kilometres in 3:53 are what he and Sky team mate Peter Kennaugh are capable of in a team pursuit.

The Shack are next off the ramp; the faces display nerves; can Frank fight for the podium?

I don’t think so.

GreenEdge have some big TTT guns – Svein Tuft and Jack Bobridge will be good, today.

Farnese falls short of Lampre, too. 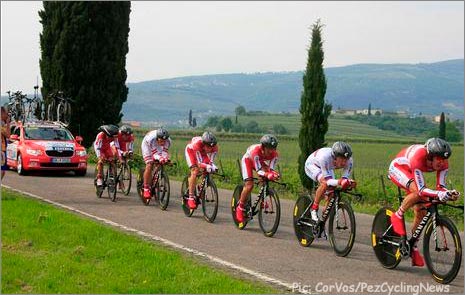 Katusha flew under the radar to a fanastic 2nd place.

Katusha go top with 37:09 and 54 kph will be the next barrier to be broken – a good day for Rodriguez.

Movistar go second, not bad at all.

BMC are on the road, Phinney has the magic of wearing beautiful pink in beautiful Italy to help him forget the pain in that ankle; whilst Hushovd, Ballan, Pinotti are all handy men to have aboard.

We see Sky on the course’s one drag and the sparkle doesn’t seem to be there.

GreenEdge go top at check one – but Garmin blast it by seven seconds. Rabobank finish well down and are beaten by NetApp – if I was a Rabobank director, I’d be looking for better value for money. Saxo go second, not a bad ride.

On the percorso with Garmin and Alex Rasmussen cracks on the drag – not a good man to lose, he has power and speed.

Liquigas can’t topple Katusha. I wouldn’t have bet on that one – and an even better day for Rodriguez.

Back out in the sticks and GreenEdge are having difficulty keeping it together, precious seconds are lost.

BMC on the drag and Phinney is hurting, his shoulders rock, it’s tough for the big man.

Astana go second – and that’s good news for Kreuziger. Garmin are rolling like a freight train from a Johnny Cash song, the throttle is wide open and the firemen are stoking hard.

QuickStep aren’t far away at the finish – as GreenEdge begin to look ragged out there. 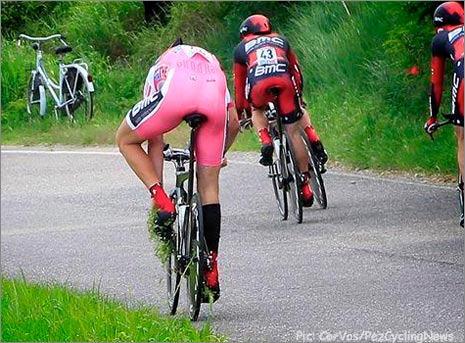 Taylor Phinney’s bad luck continued with an off-course excursion, while his good luck remained strong too – he avoided a crash and rejoined the team safely.

Phinney ‘does a Stybar’ and takes to the grass, they have to ease, regroup – disastrous. Long strands of lush green Italian countryside stream from his rear mech – the photogs will love that.

Vacansoleil go 12th – oops! Cav drives Sky back into town – 6th with teams still to come, no rosa for Geraint. GreenEdge are scrappy, Vik’s tip for the day aren’t going to do it – especially now that Bobridge has popped.

The Shack looks like they’ve brought everyone home safe and sound – but they’re not top three.

Goss drives and drives for GreenEdge as Garmin look more and more like winners. The second hand ticks on and GreenEdge can do no better than fourth.

Garmin are going berserk, gaps open, men look they’re being burned with hot irons as they torture themselves to close the line – they go top by five seconds.

There has to be huge respect for Katusha on this day, just a handful of seconds behind a specialist chrono team.

BMC fight, but the battle is lost, Phinney freewheels in, wasted, slumped over the bars; real grinta from the young American – respect to the man.

Not as fast as we expected and no real disasters for the GC men – just don’t say that to Taylor Phinney.