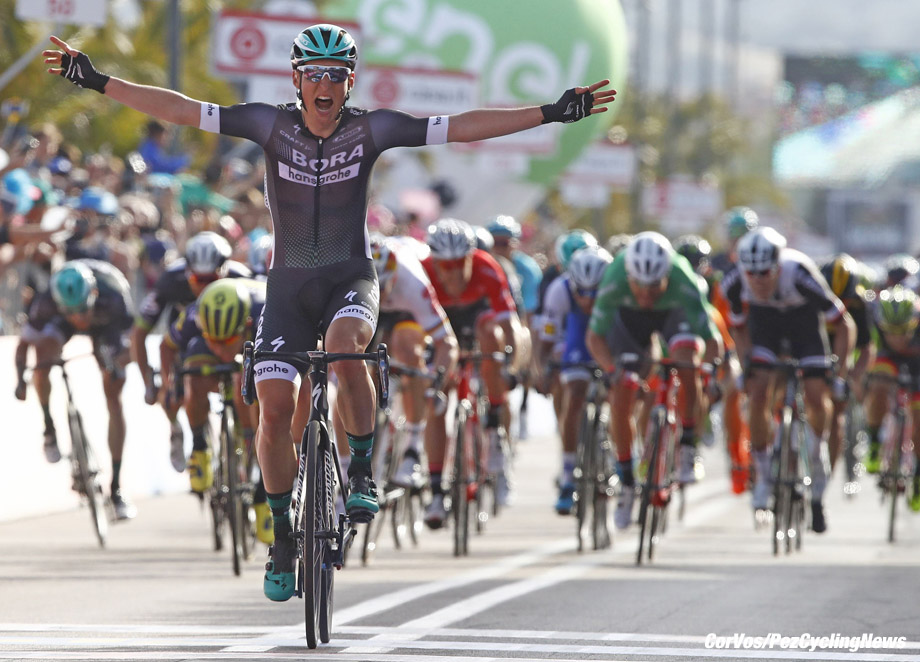 A big surprise for Pöstlberger

The first stage of the 100th Giro was looking to be quite forgettable until it hit the final kilometer. The break of the day was failed from the start, but they had jerseys to chase and it was Bora-Hansgrohe who took them all. A late crash with 3.5 kilometers remaining shook the peloton and lead-out rider Pöstlberger found himself in the lead and heading for the history books.

Route
The 100th Giro d’Italia kicks off with a sprinter’s route around the northern coast of Sardinia from the west coast town of Alghero to the east coast town of Olbia, which also hosts the start of stage 2. The riders will be faced with 206km, with three categorized climbs along the route. None of the climbs will inspire fear, the highest is the second climb of Trinita d’Agultu at just 362m. There’s 21km from the final climb, San Pantaleo, to the finish, plenty of time for any struggling sprinters to hitch back on to the peloton and fight for the first pink jersey.

It’s not quite as straightforward as it looks though, the last 5km feature a litany of obstacles. There are tight turns, road furniture, and even pave to complicate matters. No spectators want to see anyone end the 100th Giro sat on their arse on the tarmac, but with such a technical run-in, the organizers are really pushing the rider’s handling skills.

This is a brutally difficult Giro d’Italia but at least the opening stage shouldn’t be too taxing for the riders, beyond the distance, the rolling terrain, the sea breeze, and the very hard finish. 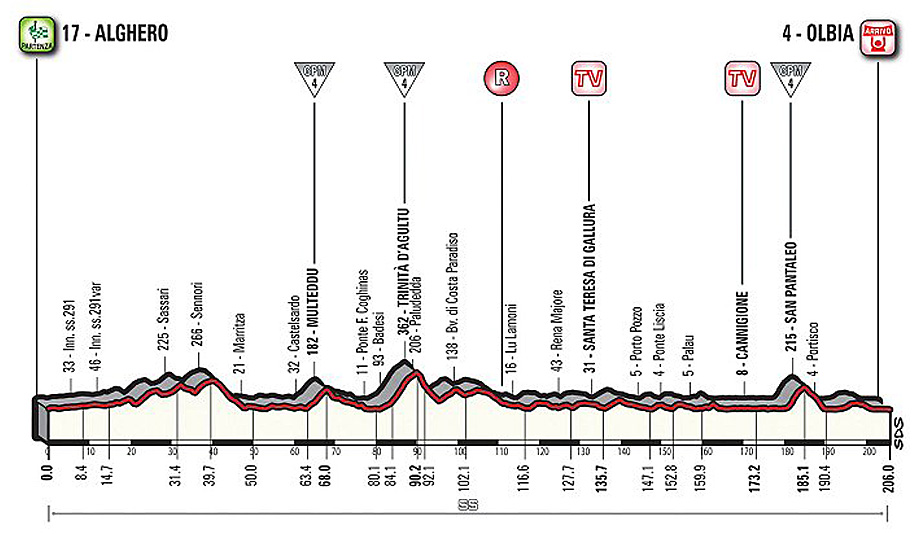 Dark Clouds and Sunny Skies
The 100th Giro d’Italia kicked off with a blast from the past as there was a beginning of Grand Tour doping positive. The particular idiots responsible were Nicola Ruffioni and Stefano Pirazzi, both of Bardiani CSF. Pirazzi had been a stage winner at the Giro in 2014 and Ruffioni was coming into the race with some form off the back of two stage wins at the recent Tour of Croatia. There was the usual posturing from Bruno Reverberi, the team manager, who claimed he felt like crying after hearing the news. A similar display, no doubt, to what he did when Emmanuelle Sella tested positive in 2008. He was also in charge when Bardiani ran roughshod over the MPCC rules on low cortisol levels, and allowed an unnamed rider to start the 2015 Giro d’Italia despite being below the threshold. Anyway, there was a bike race going on, so that’s all I’ll say on the positive tests. 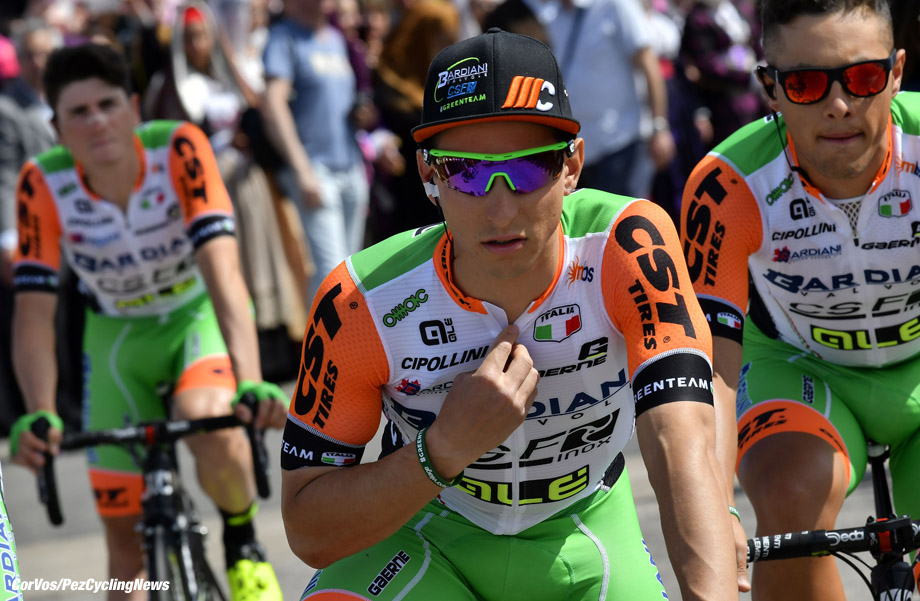 Bardiani-CSF are still in the Giro… Some of them

The opening forays were plentiful and the peloton were steaming away from Alghero, but eventually a break of six did go clear; Mirco Maestri (Bardiani-CSF), Cesare Benedetti (Bora-Hansgrohe), Marcin Bialoblocki (CCC Sprandi Polkowice), Pavel Brutt (Gazprom-RusVelo), Daniel Teklehaimanot (Dimension Data), Eugert Zhupa (Wilier Sella Italia). They built a lead of 1:20 and the peloton settled into the day ahead.

With the gap flying out the four minutes, and still 195km left to ride, there was more than enough time to discuss the riders in this cosmopolitan break. There were two Italians, Maestri and Benedetti but four other nationalities present, including Zhupa, the only Albanian pro rider and the last man on the start list. The 27 year old has raced the last two Giros but he’s yet to win a race outside of his homeland, he won the road race and time trial national championships in 2016 after winning the time trial in 2015. He also won the Balklan Elite Road Classics in 2016, also held in Albania. Pavel Brutt will be a more familiar to most fans, he won a stage in the 2008 Giro, he hasn’t crossed the line in first since 2012 and his best Grand Tour GC result is 87th, in his first ever Giro in 2007. 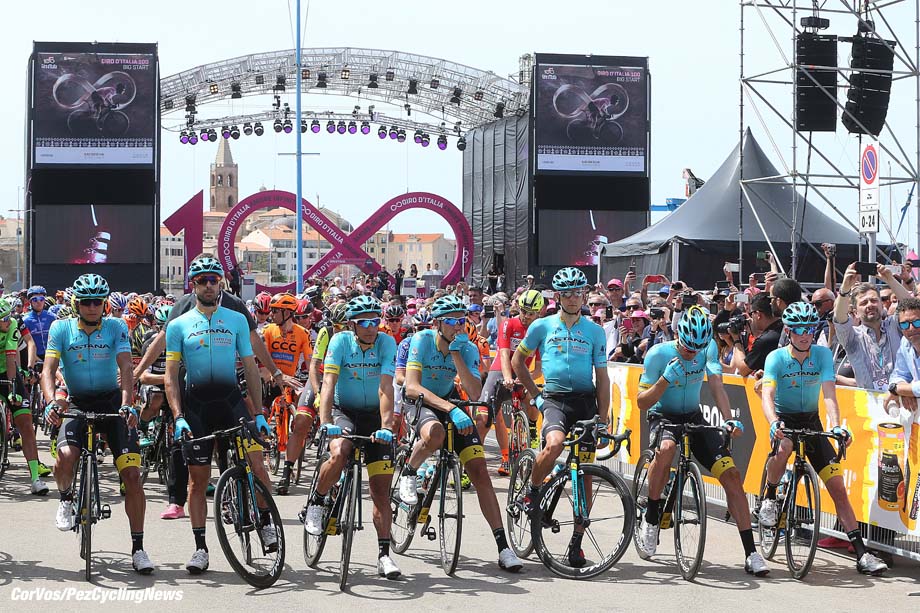 Marcin Bialoblocki will be well known to any UK cycling followers, he raced there between 2011 and 2016. He was touring around the British domestic and continental teams before a late career resurgence gave him a time trial national championship, a victory in the final time trial at the Tour of Poland and a top ten at the World Championships. That was enough to take him to CCC Sprandi Polkowice and, at 33, he makes his debut in a Grand Tour here.

Meanwhile, back at the race, the break’s lead shot up to seven minutes before a sprint team alliance of Quick-Step Floors, Orica-Scott, and Lotto Soudal brought it back to a more manageable five minutes. The stalemate in the break was broken on the first climb thanks to a two up sprint between Benedetti and Zhupa, which the Italian took with ease.

A relatively leisurely 78km had been covered in the first two hours but the break’s lead was slowly melting away, now just four minutes as the sprinter’s teams kept the peloton zipping along. None of the teams wanted to catch them with 130km left to ride but the six men in the lead were being kept on a very tight leash.

Teklehaimanot had been excluded from the running on the first climb, but he put a dig in at the foot of the second climb. Brutt, Benedetti and Zhupa were able to counter but Bialoblocki and Maestri were caught out and left floundering further down the climb. Over the top of the climb, Benedetti surged past the Eritrean rider to stamp his name on the first jersey of the race. Bialoblocki was able to catch back up but it was day over for Maestri who faded badly on the climb and was left to be reeled in by the peloton, before many of the cameras had even had a chance to catch his jersey at the front of the race. 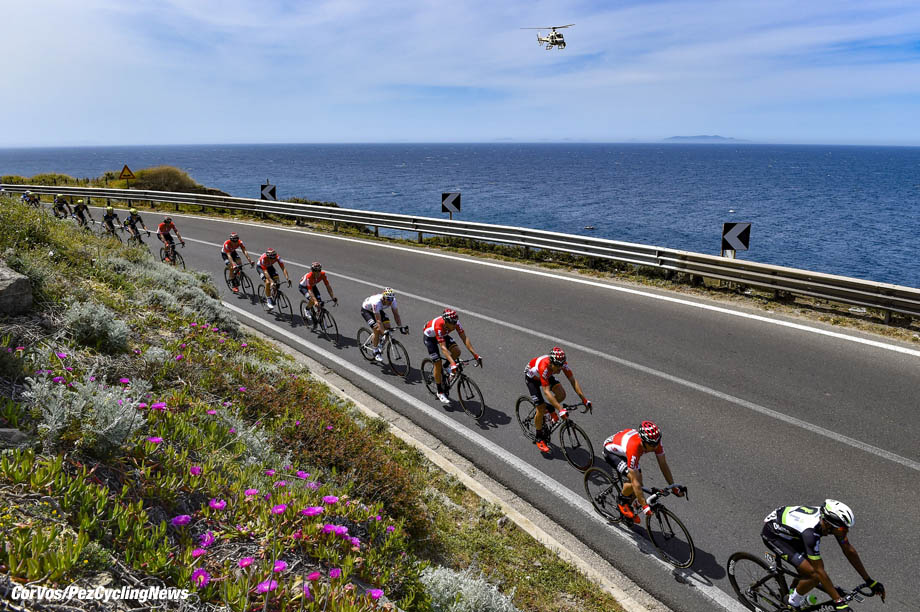 All At Sea
As the riders rode into the final 100km, the newly reduced break were the first to hit the coastline, and with it, an increase in wind speed. It was a headwind at first but it would be turning into a crosswind as soon as they hit the east coast and the final run-in to Olbia.

Despite the low key first 100km, there was a definite increase in nerves as the riders continued on the sun drenched coastal roads. The break’s lead had stabilized at 2:30 but there was movement in the peloton as the GC teams fought to get their main men near the front. Unfortunately, the promised winds had arrived, but they’d arrived directly into the rider’s face and slowing them to a virtual crawl. The race manual had suggested a pace of 41kph as the slowest possible, but the speedometer wasn’t yet troubling the 39kph mark.

Inside the final 40km and the situation was the same as it had been for the past hour, the break were held just above the two minute mark and Pieter Serry (Quick-Step Floors) was riding at the head of the peloton. The scenery was breathtaking though, even if the racing wasn’t. The riders were swooping along twisty coast roads between beautifully verdant forest on their right hand side and glistening blue seas on the left. I can imagine that the term ‘flights to Sardinia’ was searched a lot more today than usual.

The monotony was broken by the final climb however as Benedetti cranked up the pace at the foot of the climb. It was too much for Bialoblocki who waved goodbye to his break away mates and drifted back towards the group. Benedetti was the smallest man in the break however and it used it to good effect to power clear and take yet more points and more of a grip on the blue mountain’s jersey. 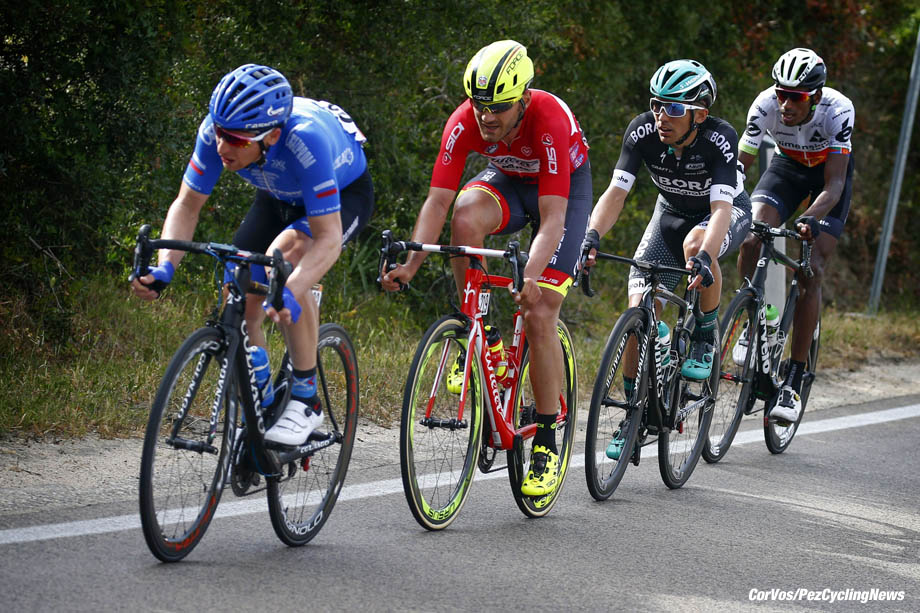 20K to Go
After the sprint for the first KOM jersey, it was only going to be a matter of time before the peloton gobbled up the break away of now four riders and set the scene for the fast finish.

Orica-Scott had Sven Tuft on the front, but there was no sign of Caleb Ewan. As they headed into the final 15 kilometers the lead was down to 39 seconds and the leaders were 0.5 of a kilometer ahead. The run-in to the finish had been resurfaced for the Giro, but there was still a round-about and a tricky junction with around 500 meters to go. The other problem for the fast finishers was the slight rise to the 1K to go banner and a head-wind.

10 Out
The front of the bunch was a mix of jerseys, the sprinter’s teams of Lotto Soudal, Orica-Scott and Quick-Step, but they have to contend with the GC teams of Movistar and Bahrain-Merida who were looking out for their main-men. UAE Team Emirates also thought they would join in the fun for Modolo. 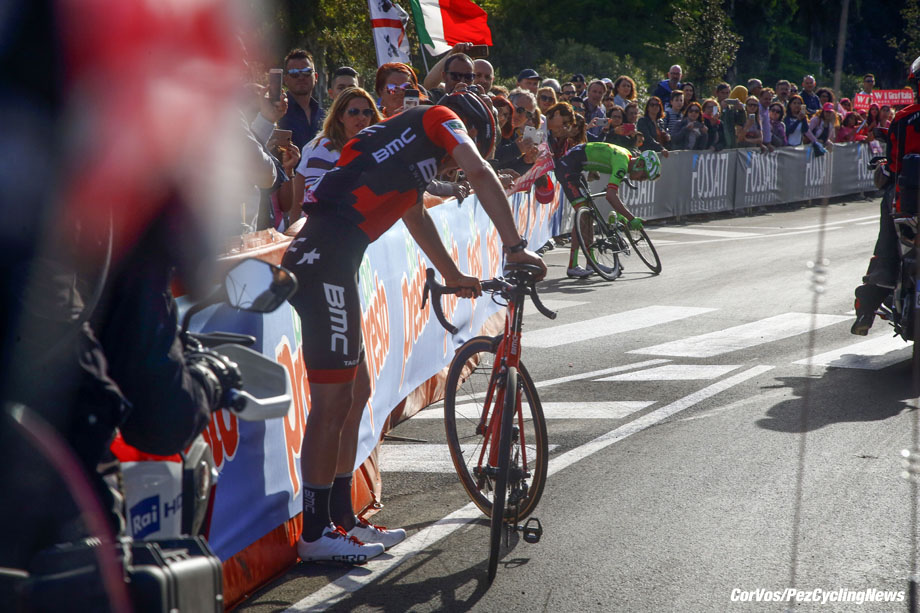 Crash with less than 4K to go

The escape were hanging out front and as they entered the final 4K they still had nearly 20 seconds, but their day was nearly done. Crash! And the peloton was outside the final 3 kilometers, no top GC men amongst it. At the same time the leaders were caught. Bora-Hansgrohe were in command for Sam Bennett through the twisting narrow streets before they hit the drag to the 1K flag.

The Bora-Hansgrohe rider; Lukas Pöstlberger, was leading-out for his man Bennett, but through the turns he gained five lengths on a confused peloton. With one look back he knew he had to give it his all. Behind him; the sprinters were in a mess which played perfectly for the Austrian, who couldn’t believe his luck as he crossed the line shaking his head in disbelief to take the stage and the first Maglia Rosa of the 2017 Giro d’Italia. 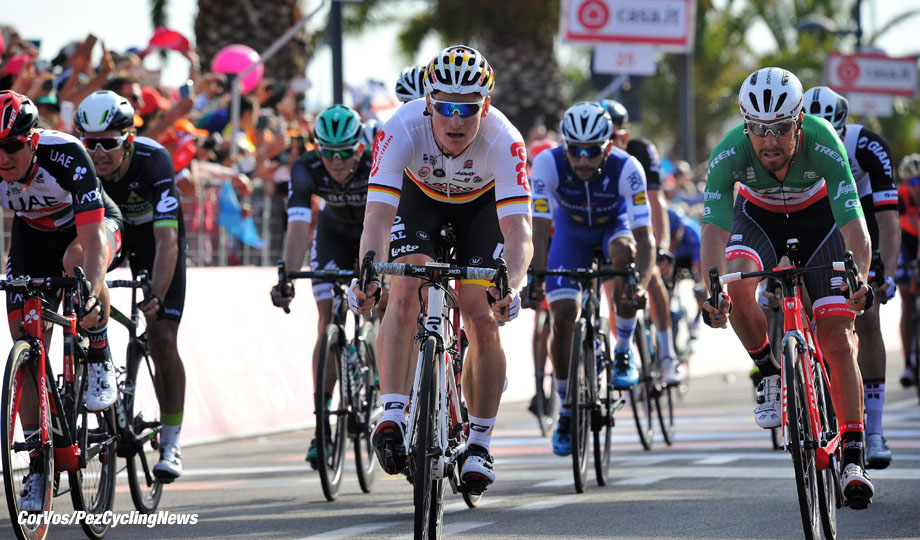 The top fast-men came in on his wheel, Ewan and Greipel led the peloton over the line with disappointment on their faces.

Stage winner and overall leader, Lukas Pöstlberger said after the finish: “It’s a surprise! I knew my shape was good. We wanted to try to lead Sam Bennett out but he lost my wheel and when I saw a gap, I decided to try myself. I gave all I had. It worked out. This is my first professional win and I get the Maglia Rosa. It will take me a long time to believe this.” 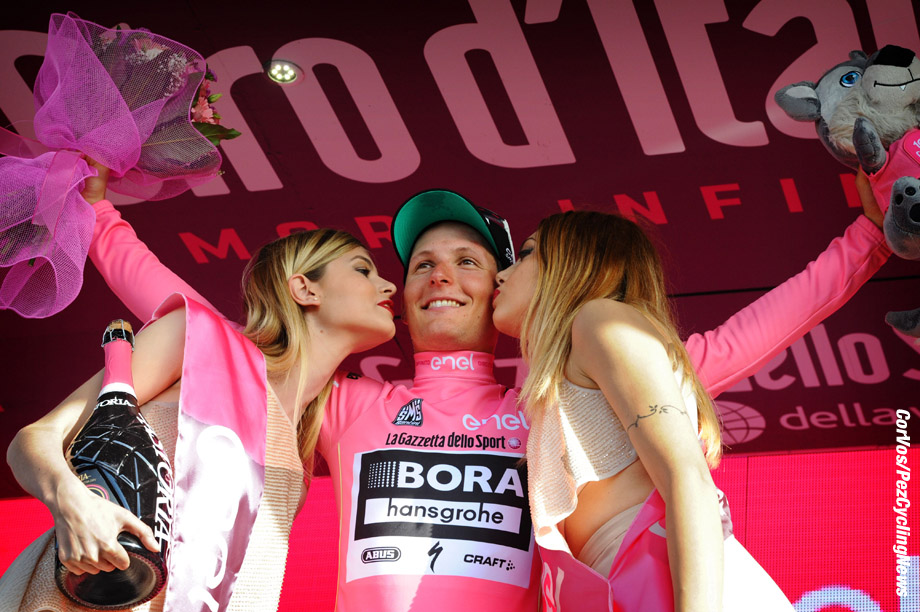 # Keep it PEZ for all the news from Italy. #