Giro Stage Report: We all expected big Dutchman Tom Dumoulin (Sunweb) to win the Stage 10, 39.8 kilometer time trial from Foigno to Montefalco. But perhaps not quite so stunningly; he put the best part of a minute into second placed Sky Welshman Geraint Thomas – who rode a great race considering his Blockhaus crash – and the best part of three minutes into pink jersey, Nairo Quintana (Movistar) to go rosa himself by 2:23 over the little Colombian. 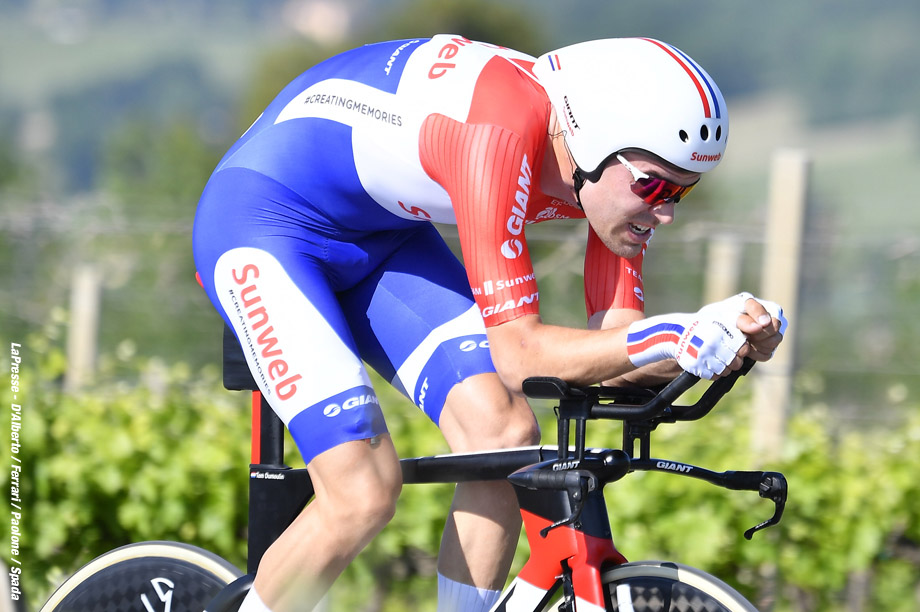 Quick-Step Floor’s Luxembourg strong man, Bob Jungels was third on the day and big, physical Dutchman Bauke Mollema (Trek-Segafredo) occupies the same position on GC. ‘The race of truth’ with no one to pace you, no ‘sticky bottles’ – just you, the percorso, the big gear and that second hand at the finish line which just keeps on ticking and does not enter into any debates. 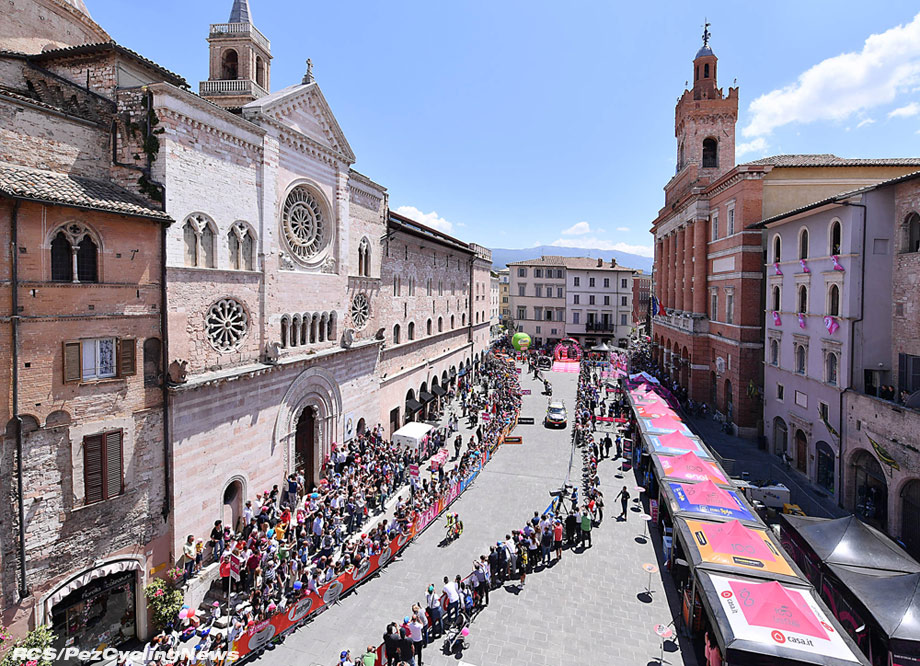 The organization have this to say about the percorso:
‘The Individual Time Trial route is varied, and features a long, flat and straight section, followed by fairly complex climbs and descents. After the start in Foligno, the route quickly leaves the old town centre (on narrow roads) and takes relatively wide and mainly straight roads for more than 12km, until past Bevagna (time check). The route then starts to climb at an average 4-5% gradient, and reaches Madonna delle Grazie, where the road becomes a false flat. A fast-running and technical descent twists and turns all the way to San Marco, where the road flattens and straightens out. The route takes a U-turn in Bastardo (second time check), then a false-flat uphill drag leads to Montefalco. The slopes are never steep, yet the climb is unrelenting. The road, narrowed at points, leads all the way to the walled city of Montefalco, heading for the finish of the ITT. The final kilometers are slightly uphill. In the last km, the route descends and passes through a gateway, and then goes up again, on a short, steep ramp, leading into the 200m uphill home straight, on 6m wide asphalt road.’ 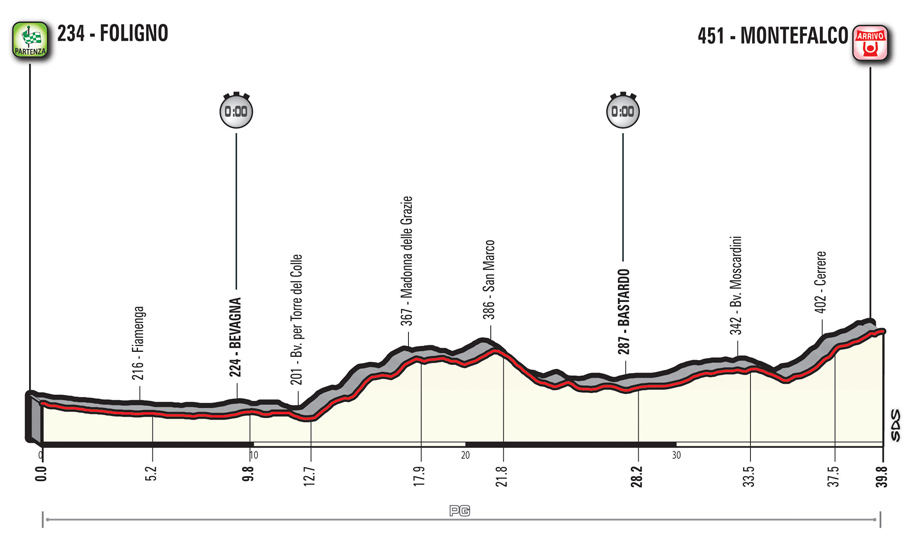 Jan Barta (Bora-Hansgrohe) was the early leader on a short ‘53’ until Tratnik (CCC Sprandi Polkowice) returned the first ‘52’ – finishing 10 seconds inside the 53 minute mark. Despite tying up in the last few kilometers it looked like Sky’s former world champion, Vasil Kiryienka was going to shatter that but grounded a pedal on a bend in the last kilometer and came down. Despite his excursion to terra firma the Belorussian still recorded best time – 52:37. ‘Kiry’ wasn’t the only one to taste the tar, Russian hard man, Pavel Brutt (Gazprom-RusVelo) over cooked it on a bend and tangled with a row of concrete reinforcing rods – ouch! 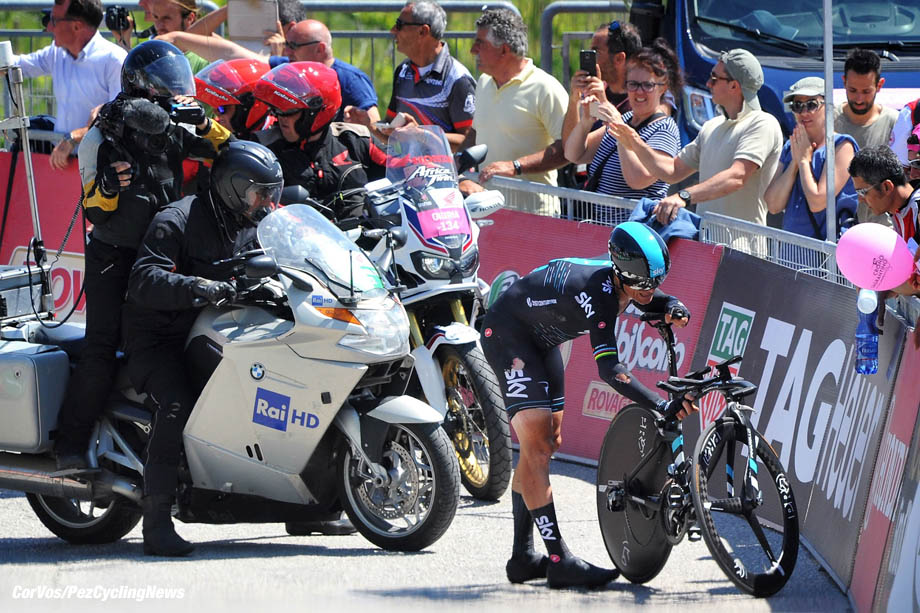 Spain’s Luis Leon Sanchez goes top now for Astana in 52:17; little doubt that the winning time will be well inside 52 minutes. All the riders are mentioning a strong variable wind with a tough finish so pace judgement more than ever is the key requirement here.

Geraint Thomas (Sky) goes top at check one – that’s the fast bit, soon it climbs and we’ll know better at check two. The early, flat part of the course is technical, very much twisting and turning in parts but with long, exposed straights too for the pure chrono men. Thomas is catching Rui Costa – a good ‘pull out’ for the Welshman. 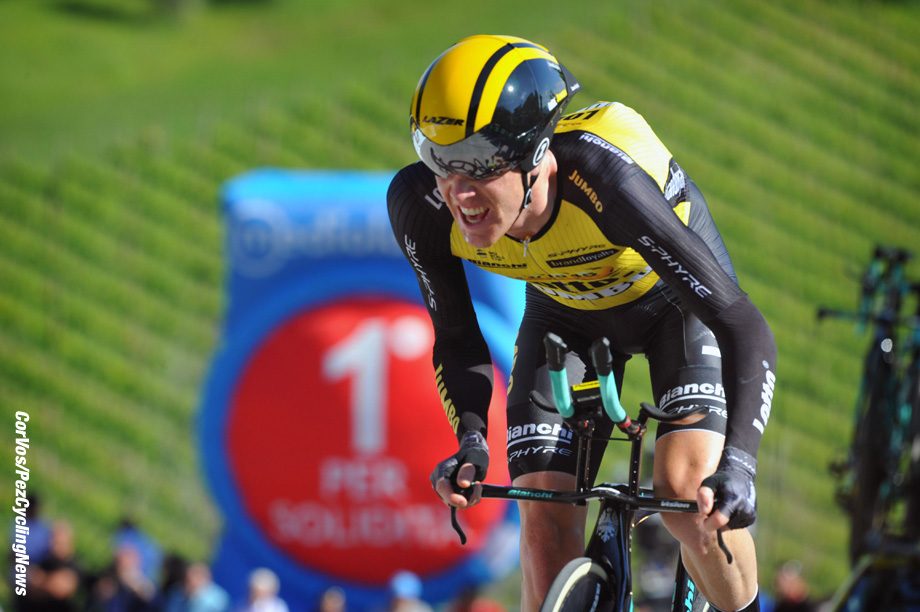 Last year’s moral victor of the Giro, Dutchman Steven Kruijswijk (LottoNl-Jumbo) hasn’t started sparklingly well but perhaps he’s thinking about those drags in the second half? Big Bob Jungels (Quick-Step floors) goes top at check one, two ticks of the second hand ahead of Thomas – he’ll be seeking to haul back precious seconds lost on Blockhaus. Thomas goes top at check two but from there to the finish it’s a head wind, has he paced it right? Tom Dumoulin (Sunweb) drops of the ramp, this should be his day. 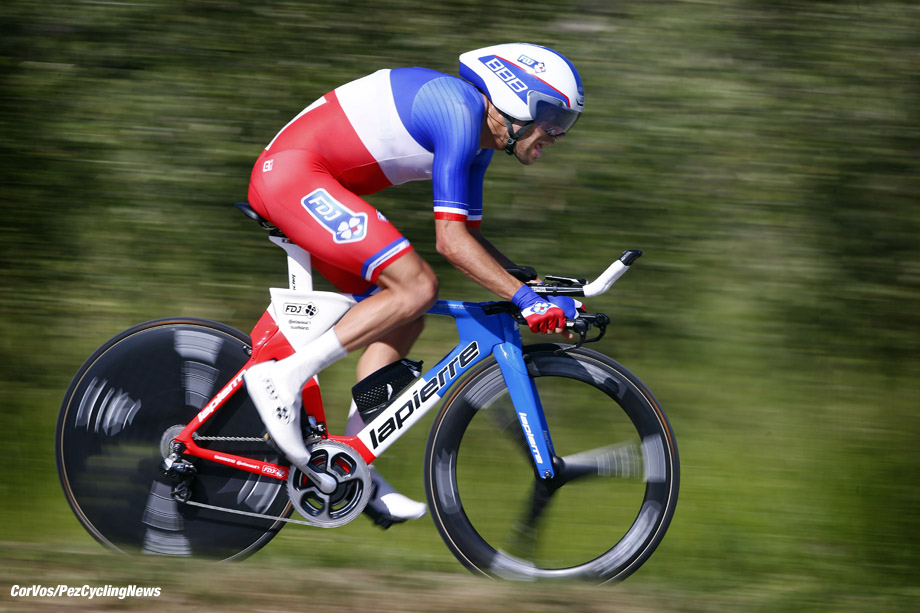 Thibaut Pinot (FDJ) now, looking resplendent in the tricolour champion’s skinsuit as he joins the fray. Meanwhile, out on the hot tarmac, defending Nibali (Bahrain-Merida) is doing his best – but the chrono isn’t really his ‘thing’ and he’s only 19th at check one.

It’s not van Garderen’s day either, well off the pace at check two. Thankfully, Quintana (Movistar) has dispensed with the pink over shoes, they made me feel queasy three years ago – and he’s away, they’re all on the road now. 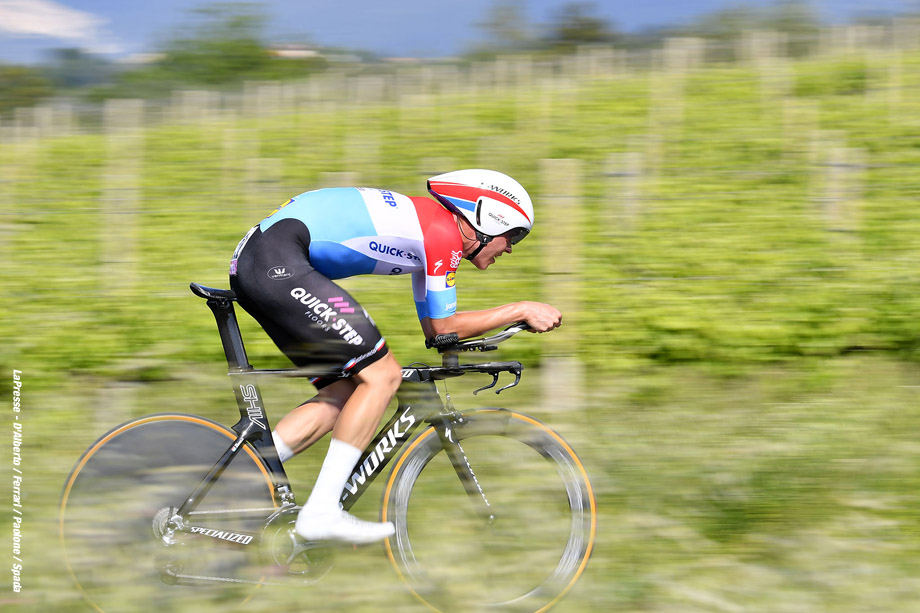 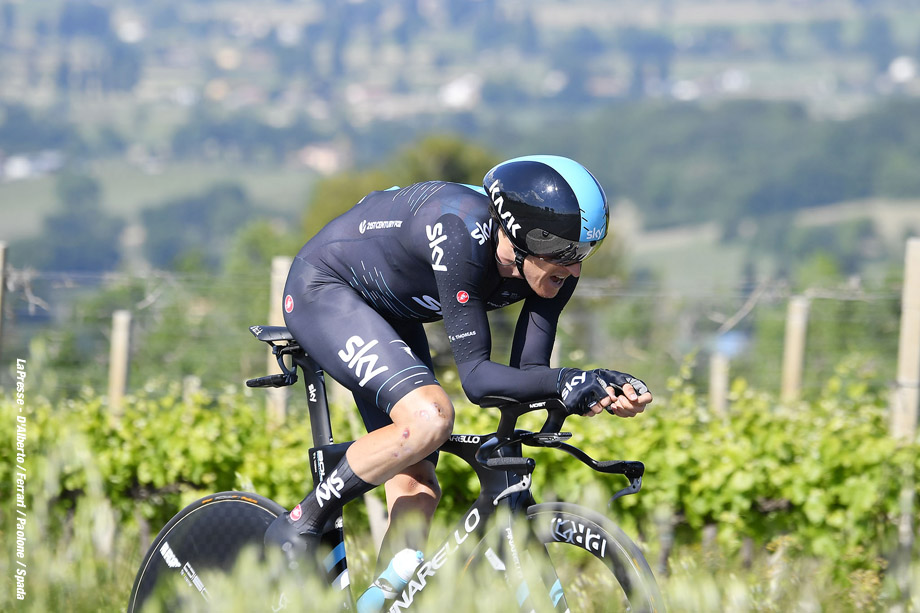 Thomas goes top time on the finish line whilst Nibali ‘chugs’ a climb, he’s not looking great to my eye. Pinot is only eighth – he’ll be disappointed with that – at check one behind the flying Dumoulin who now tops the standings at check one ahead of Jungels and Thomas. Bauke Mollema (Trek) is apace with Pinot. Jungels is forging home as Quintana ‘spins’ a climb – he’ll be losing time hand over fist here.

Zakarin (Katusha-Alpecin) comes home, off the pace; so too is van Garderen – Jungels now, he’s second to Thomas, seven seconds back. Quintana continues to spin – Tall Tom will have blasted up here on a ‘big one.’ Pinot rides the ridge road through the vineyards as Dumoulin continues on his charge. Nibali is 11th at check two – not brilliant. Mollema is eighth at the second check; Kruijswijk isn’t on a good one – but Dumoulin is, 36 seconds up on Thomas at check two.

A nice ride from Costa Rico’s finest, Andrey Amador (Movistar) for eighth spot on the finish line. Pinot 15th at check two – not good. Mollema heads home, all over the bike; the best chronomen are silky smooth – on the subject of which, Dumoulin is coming in like a cruise missile on final target guidance. Zakarin comes home, top 10, not disastrous; but ‘disaster’ is the right word for Quintana’s check point two result – he’s hemorrhaged two minutes to Dumoulin. 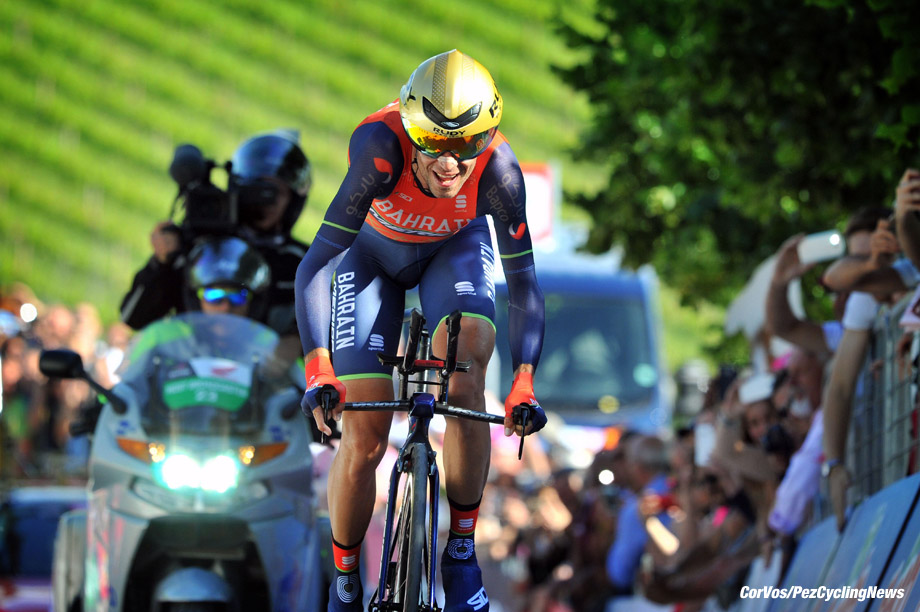 Nibali is fighting hard, not the smoothest but there’s no questioning his commitment here in the finale. Few men look worse on a TT bike than AG2R’s Pozzovivo – I can’t look. . . Nibali comes home – fifth, not a bad ride, he’s ridden that second half very strongly. 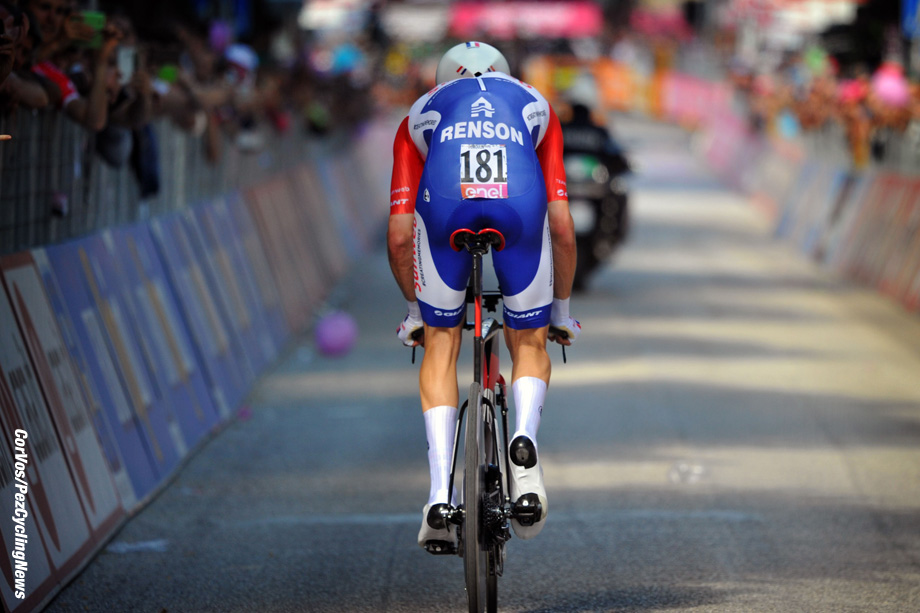 Is Dumoulin tying up in the finale – or is it just that the gear the Dutchman is turning is immense? I think it’s the latter. . . Mollema comes home tenth, another solid ride – if only he sat still on that lovely Trek Here’s Dumoulin! Hot on his compatriot’s heels: 50:37 and that’s 49 seconds up on Thomas – a beautiful chrono. 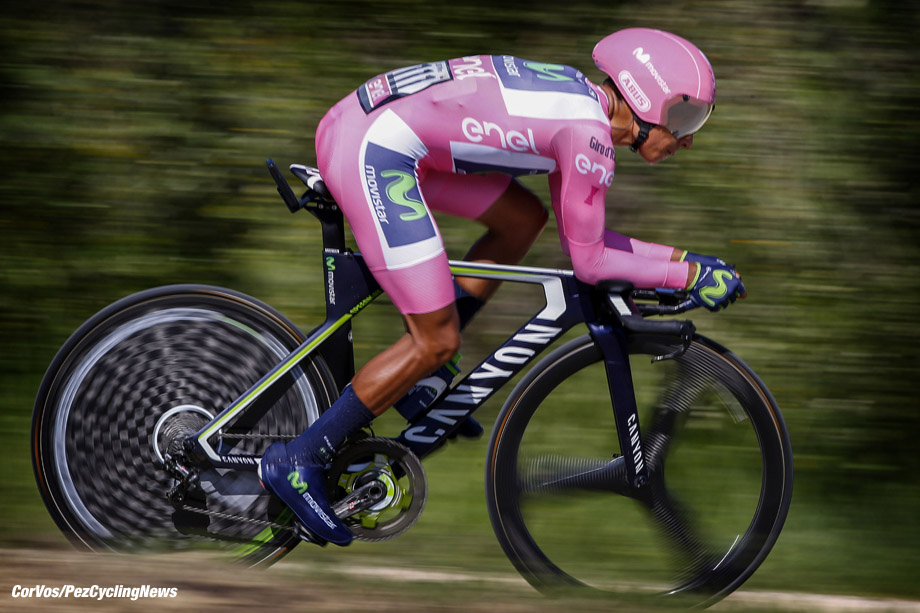 The sand is pouring through the hour glass for the little Colombian out there in pink – it’s going to be a sore one. He looks ‘done’ in these last few kilometers, struggling badly, not at one with his machine at all.

Dumoulin spins on the rollers; he’ll be solidly in pink tonight. Pinot now, we’d almost forgotten him – 19th on the day, his manager Monsieur Madiot will not be happy tonight. Quintana comes home, 23rd @ 2:53 on Dumoulin. The big Dutchman smiles at last – we hope that have a ‘Large’ maglia rosa for him. ‘Jungels Rules’ then – but remember what the wise men always say; ‘a Grand Tour is won in the final week. . .

Stage winner and new race leader Tom Dumoulin (Sunweb): “Looking at the results I’ve had a good race. But I was fighting with myself and I actually didn’t feel good. In the last time trials I did I kind of gave up and I was disappointed afterwards. So today I never gave up. 2.23 is a nice gap to have before the mountains but I lost several minutes in one day at the Vuelta so I know by experience that the Giro is far from over.” 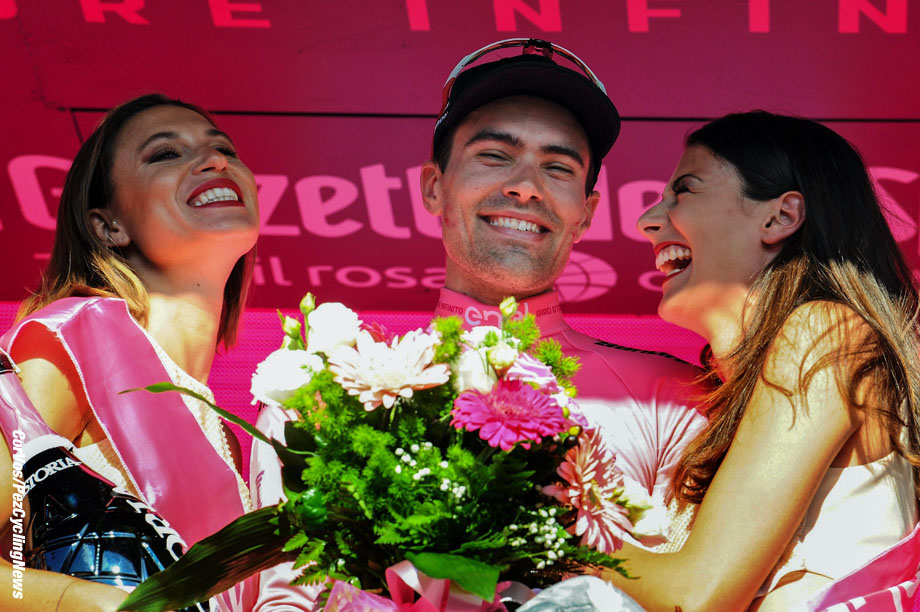 Keep tuned to PEZ for all the stage reports, the best pics and Ale ‘Roadside’.