Giro Stage Report: Fernando Gaviria secured yet another stage win to all but seal the points jersey and stamp his position as the best sprinter here and at his age (22) he will be hitting the finish line first for quite some time. First Grand Tour and three stage wins, just to prove not all Colombians are climbers. 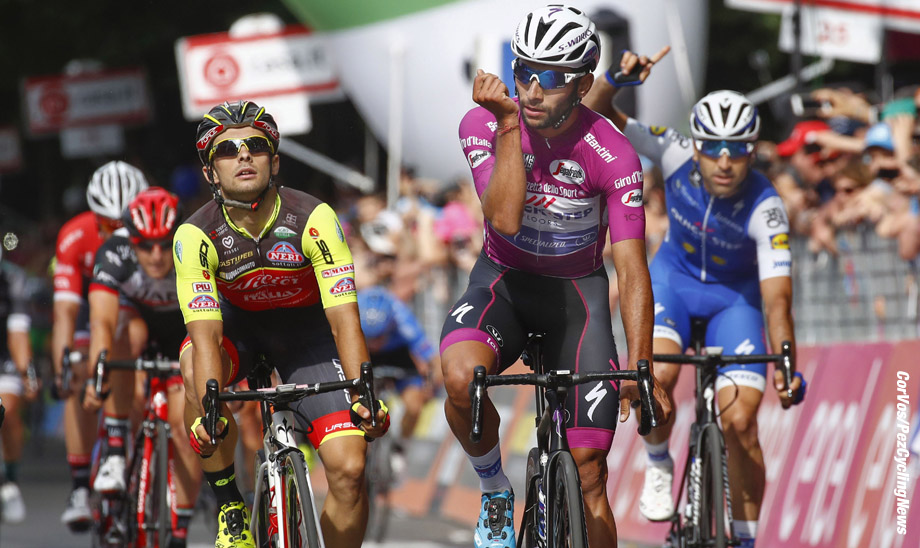 It was the longest stage of the Giro, and despite some king of the mountain’s action early on, it looked like a stage the riders weren’t too concerned about. A three man break went clear and built up a lead of over six minutes, but they were just billboards and as quickly as their lead was gained, it was removed on the flat and wide run in to the finish. Bora-Hansgrohe and Orica-Scott did almost all the work but it was Fernando Gaviria profited as he took his third win and etched his name into the points jersey. 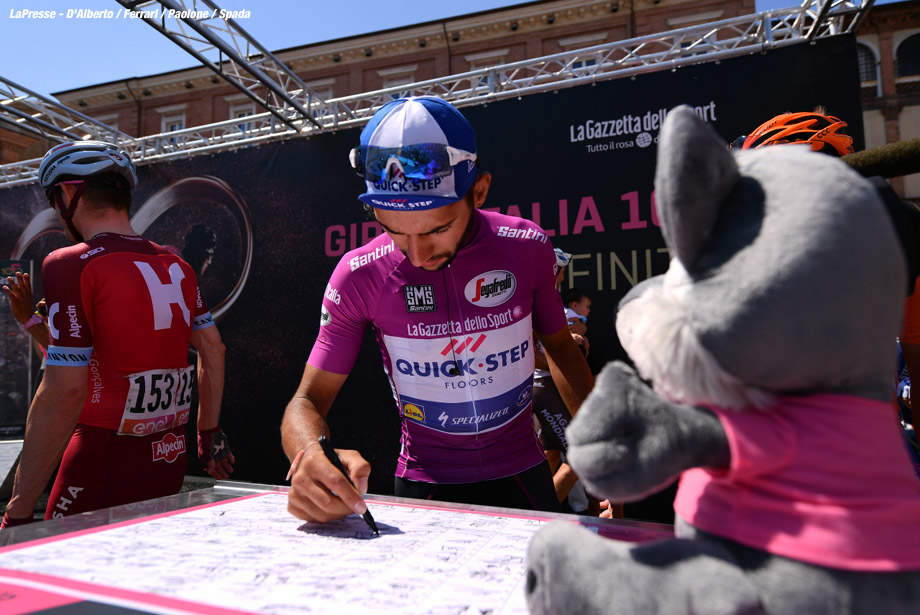 Route
After the fantastic drama of yesterday we’re in for a 234km, the longest day of the race, slog across the northern plains of Italy. We set off from Forli and the first half of the stage is quite a challenging ride with two categorised climbs; the second category Colla di Casaglia and the third category Valico Appenninico. The Casaglia is the high point of the day, 913m, but with 125km from the summit of the second climb to the finish, this isn’t a day for climbers. The latter half of the stage is a gradual downhill to Reggio Emilia, which some people may recognize as the town which gave its name to an educational philosophy. The philosophy basically says that children should be encouraged to develop their own interests at a young age, and not pushed down a specific path. At PezCyclingNews you don’t just get cycling coverage… 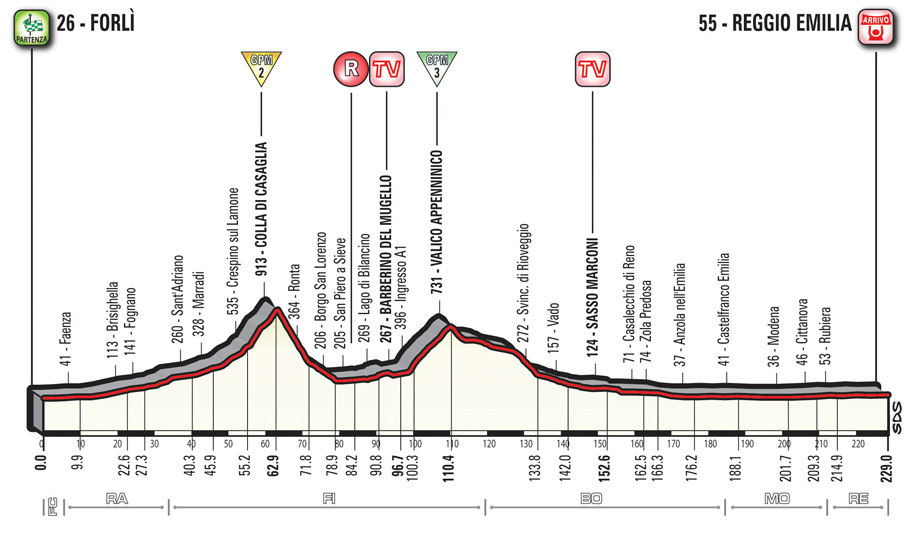 So far, Fernando Gaviria has been the pick of the sprinters with two stage wins. André Greipel and Caleb Ewan have also had a chance to raise their arms across the line. It’s been a case of so near yet so far for Irishman, Sam Bennett, he was 9th when team mate Lukas Pöstelberger took the opening stage and he’s been third, twice since then. The sprint field has thinned down after the foray into the mountains, but there’s just two sprint stages left before the hellish final week and a half, so don’t expect the fast men to cough up the opportunity today. 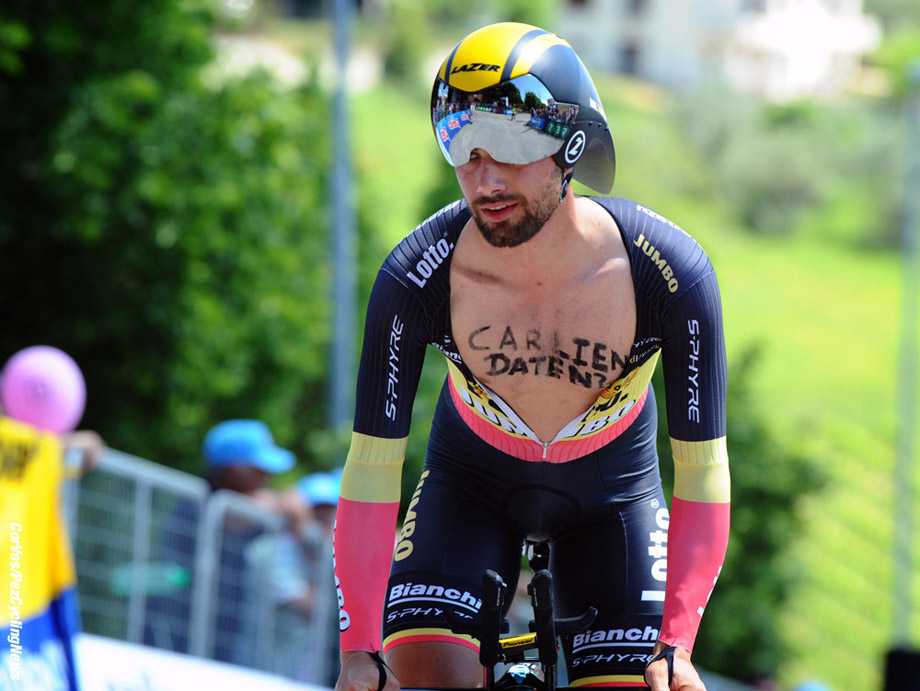 Save the Date
The start of the day was marked by some typically poe faced UCI pettiness as they fined Victor Campanaerts (LottoNL-Jumbo) 100CHF for asking someone out by writing a message underneath his skin suit. She apparently said yes, so the Belgian is unlikely to begrudge the fine, the first date may be a little cheaper experience though. 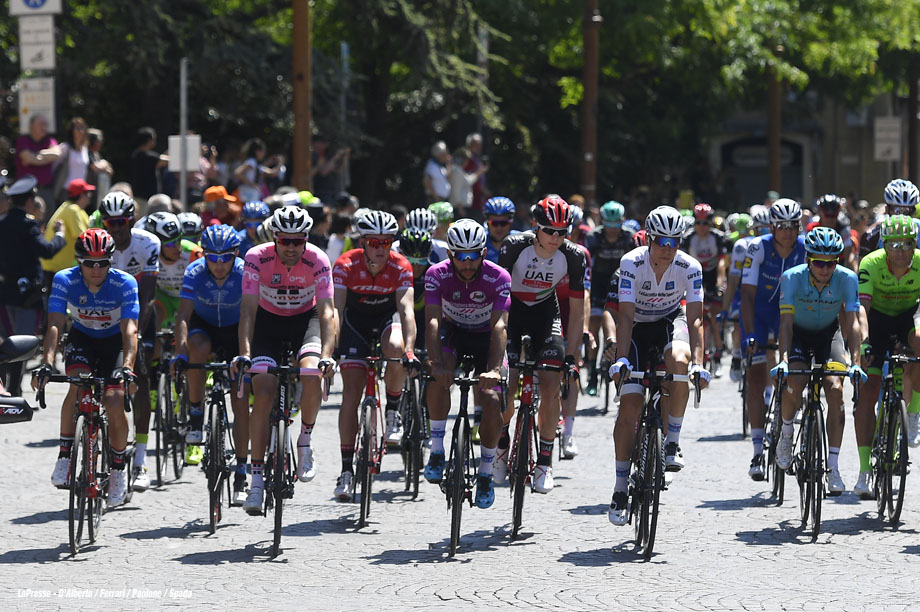 With such a lot of riding yet to come, there weren’t many people stupid enough to try and get into the day’s break, so it was left to the small teams to jump away for some television time. Mirco Maestri (Bardiani-CSF), Sergey Firsanov (Gazprom-RusVelo), and Marco Marcato (UAE Team Emirates) were the lucky (unlucky??) trio. Maestri and Firsanov seem to have been ever present in breaks on stages where the break has no chance of staying away, so why change the habit today?

The peloton were happy to let the gap grow out and as they hit the lower slopes of the first climb it had yawned out to 6:45. It was a slow news day on the long climb, but there was some drama as Jan Polanc (UAE Team Emirates) and yesterday’s hero, Omar Fraile (Dimension Data) continued their fight for the blue mountain’s jersey. The Dimension Data train was firing and they unleashed their Spaniard to fourth place, and the provisional jersey.

Lotto Soudal were keen to keep the break in check and their pace setting reduced the gap to 3:30 before Quick-Step Floors took over on the motorway to the summit of the second climb. A genuine motorway mind you, not just a big road, an actual motorway. With 100km to go, there was no point in shutting down the break just yet and the peloton were happy to let the gap extend again beyond the four minute mark. In almost the blink of an eye, the gap was back out beyond six minutes and we were back where we were before the climbs. 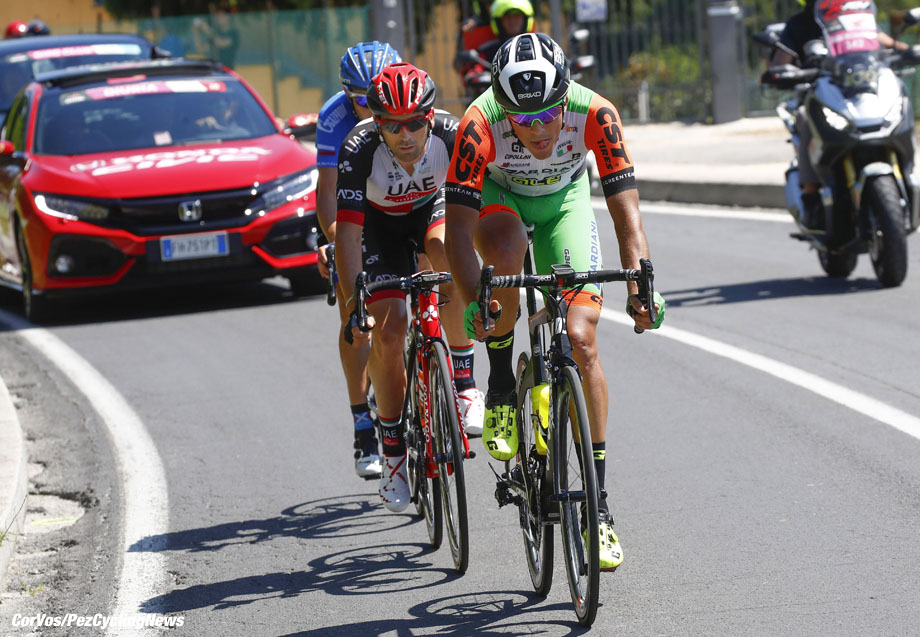 The Long Decline
Thanks to the hard entree to the stage the pace had settled at a sedate 38kph as the peloton took on the flat final 100km. It wasn’t going to continue to be so laid back though, and almost immediately the pace was cranked back up. The peloton were stretched out as they attempted to re-catch the trio up the road. Team Sunweb were having a very quiet day as they handed over the chasing responsibilities to the sprinter’s teams. After some early gains, the sprint teams of Lotto-Soudal and Quick-Step Floors were finding it harder to take back time on the brave leaders. The gap had reduced to 4:30, once again, but it was stalling there as they raced into the final 60km.

Resistance was futile though, the likes of Greipel and Gaviria had the sniff of a win and the gap was tumbling down, first to below three minutes with 40km to go and then below two when inside the final 25km. The two Italians and Russian out front knew that there was never any real chance that they would be able to stay away to contest the win and the peloton were now just confirming that. 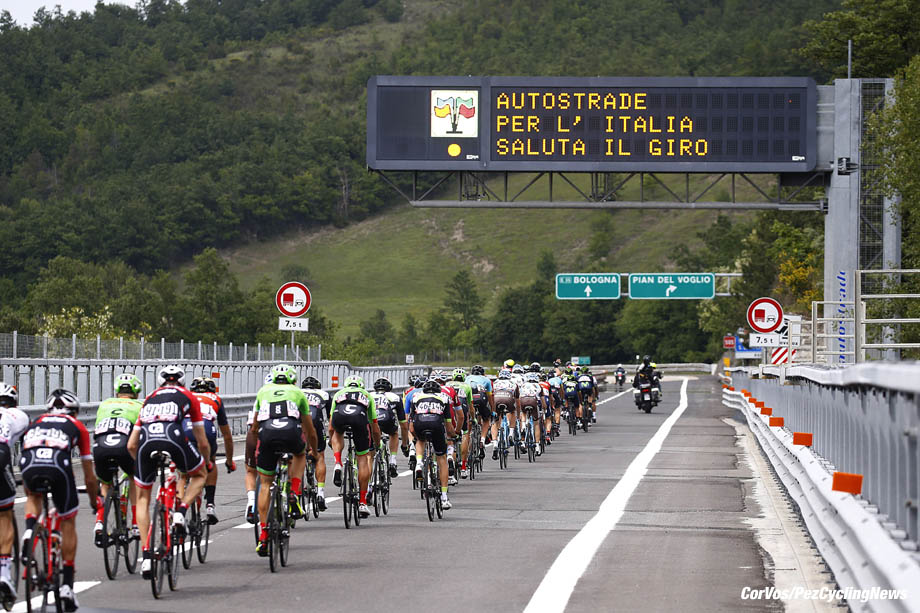 With 13km left to ride, the relationship in the lead group began to fragment and Maestri went it alone in one final show of strength. It was the 25 year old Italian against the 40 year old Svein Tuft (Orica-Scott), and the Canadian was winning as he cut the lead to just 20 seconds. Then, almost by magic, Maestri was gone and with 6.5km left to ride, the sprint finish was concerned. Much to the chagrin of the sprinter’s teams, the GC contenders were also well represented on the front of the bunch in an effort to keep their men safe. With 5km left to ride it was Movistar who were doing all the work with Bora-Hansgrohe in a good position behind. 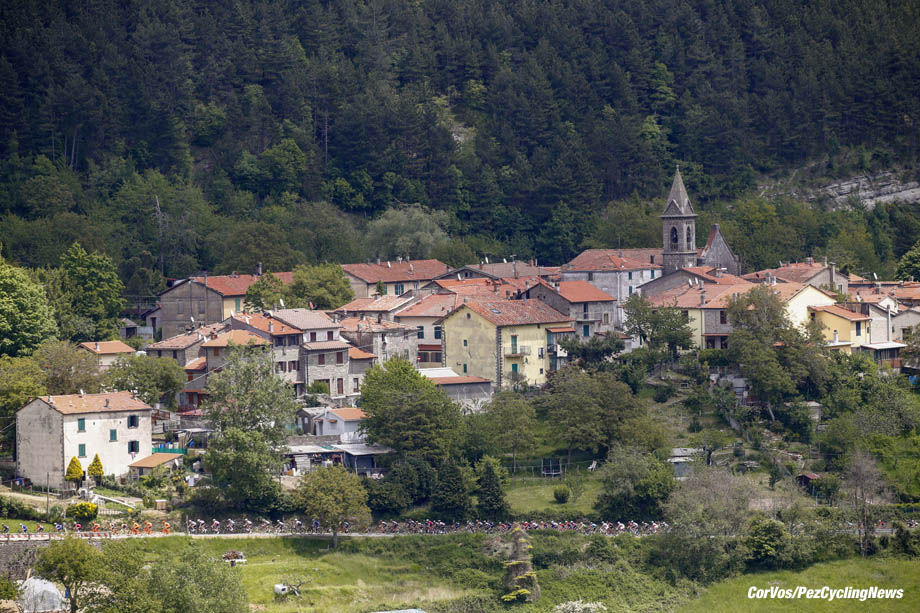 Lotto Soudal were also aiming to take control of the front of the peloton but it was all Bora-Hansgrohe as they flew into the final 4km. Quick-Step Floors weren’t visible on the front but Gaviria was lingering at the back of the sprint trains. Bora were flying though and they still had loads of riders left to use up. Greipel was being shepherded up and Bora were no longer alone. Eugert Zhupa (Wilier Triestina) wasn’t keen to wait for the sprint he took a flyer with 1.3km left to ride. He was doing a Pöstelberger, but it was the Austrian who brought the Albanian back, and now it definitely was going to be a sprint finish. Surely.

Max Richeze (Quick-Step Floors) was driving the group into the final few hundred meters and despite all the good work that Bora-Hansgrohe had done, it was Fernando Gaviria who was served the stage up on a plate and duly delivered. Jakub Marezcko (Willier Triestina) was the best of the rest but, as with the turn of the tides and the way that night turns into day, the only thing that remained consistent was Bennett’s grip on third. 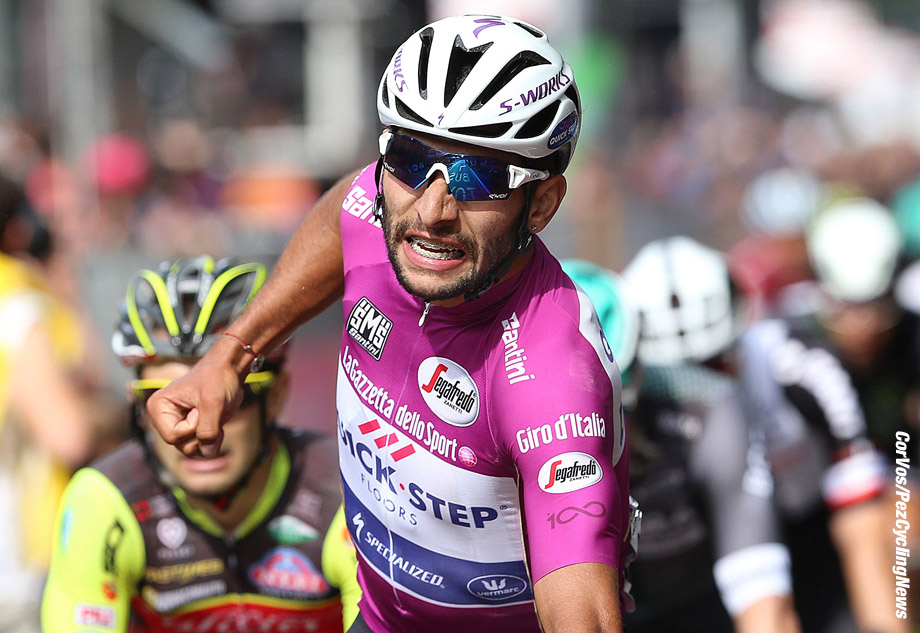 Stage winner Fernando Gaviria (Quick-Step Floors): “I was worried when my lead out man Maximiliano Richeze had a flat tyre because the peloton was riding very fast at that point. But he came across and it was perfect. I’m not the best sprinter of this Giro: that’s André Greipel because he’s got many more wins in his career than me but right now, I’m the sprinter with the best form and the best legs thanks to the preparation. And that’s how I’m here with my third victory.”

Race leader Tom Dumoulin (Sunweb): “It’s been a good day for me. A typical sprinters’ stage. It was faster than I thought. Gaviria seems to be the best sprinter here. Congratulations to him. I hope for a similar quiet day for myself as the race leader tomorrow.” 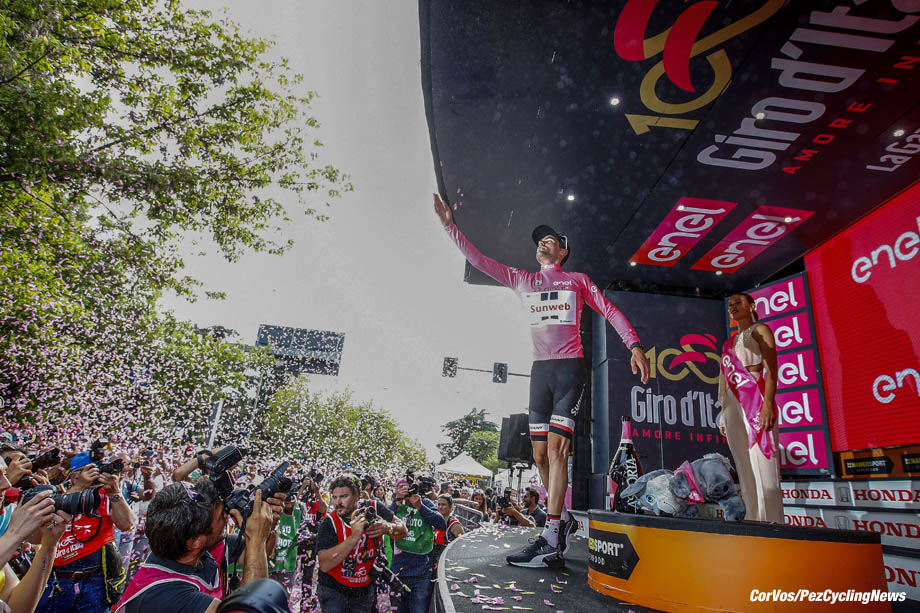 Keep it PEZ for all the Giro d’Italia news and the best photos from Italy.