Giro Stage Report: With apologies to my PEZ colleague Sam Larner, I thought why bother thinking up a headline when yesterday’s will do! Fernando Gaviria (Quick-Step Floors) repeats with a firestorm sprint into Tortona. Another stage win added to his tally, but the manner of victory was even more impressive. It was a kick-twice finish to a stage that was straightforward. 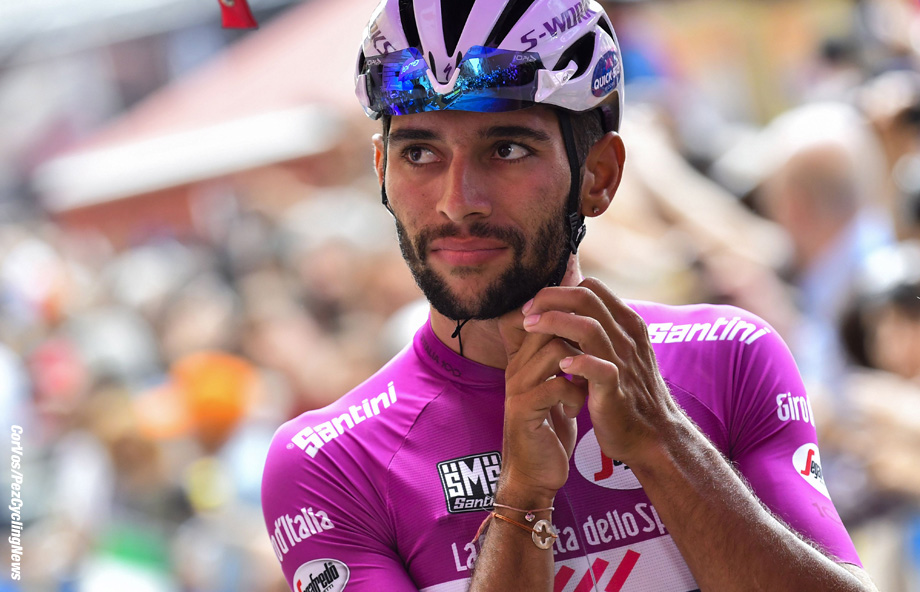 Route
A pretty good day to watch a bike race if you suffer from vertigo. With nary a pimple on the skin of today’s race profile, the Giro was screaming to the sprinters: “This is more or less your last chance so make the most of it!”

No precipitous drop-offs, no butt-clenchingly terrifying mountain views, nothing in the way of hell-for-leather descents. Just 167 high-speed kilometers between Reggio Emilia and Tortona with a whole host of twitchy sprinters.

So, how to drum up some excitement? Well, today was the perfect example of the eternal battle between breakaway and gruppo, the dream of the few versus the crushing might of the many. 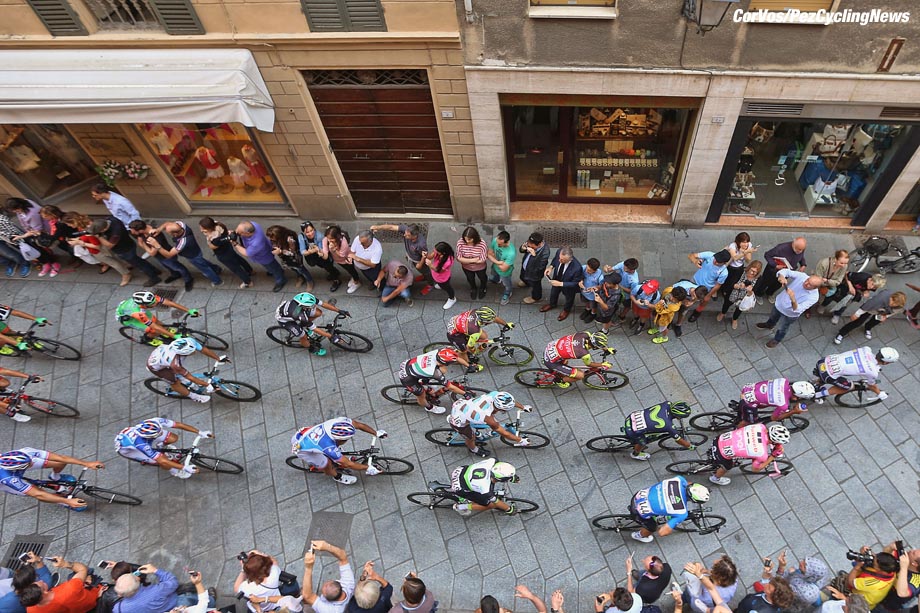 Predictably, the wildcard teams were well represented in the escape. Equally predictably, it was Pavel Brutt for Gazprom-RusVelo joined by Vincenzo Albanese of Bardiani-CSF, the baby of the race at 20. Johann Van Zyl for Dimension Data and UAE Team Emirates’ Matej Mohoric joined the party.

Unfortunately for Van Zyl, or maybe not depending on whether he’d have really looked forward to close on four hours frying in a breakaway, his team revoked the invitation and he was ordered back to the peloton. 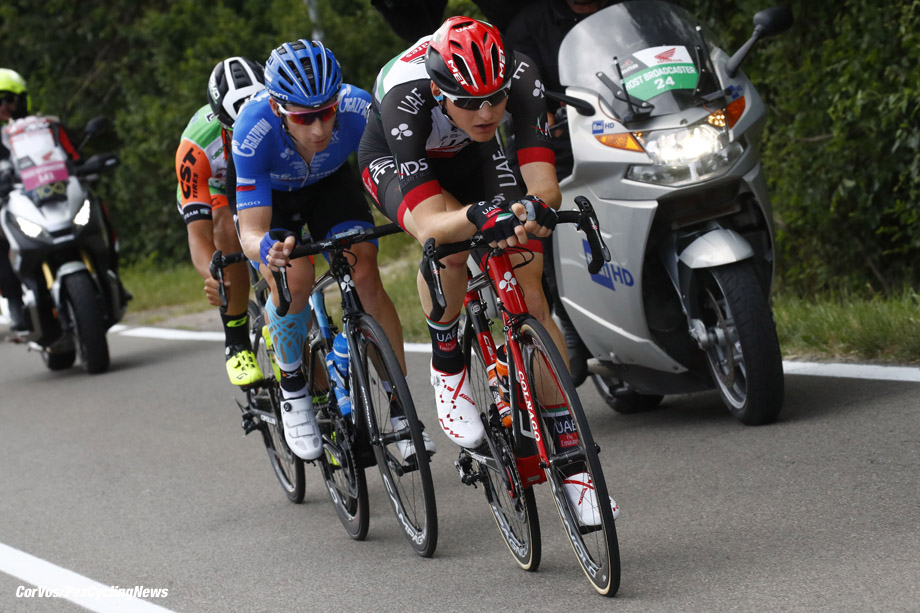 The gap never got much beyond two minutes as the sprinters’ teams kept things on a tight leash: Wilier Triestina haven’t had a stellar Giro so far, but Jakub Mareczko was a possible for the finish so the Italian squadra were to the fore, along with Bora-Hansgrohe (for Sam Bennett) and Lotto Soudal (André Greipel).

The Chase
Quick-Step Floors and Orica-Scott, for their respective boy-wonders Fernando Gaviria and Caleb Ewan also poured some fuel into the tank, to keep the chase honest.

It was one-and-a-half minutes of an advantage with 40 clicks to race, and the peloton delicately sliced another forty seconds off that at 30 clicks to race.

Heading towards 20 kilometers left and the break is swept away; the pace ratchets up and eases off as the teams try to coerce their rivals into doing their work. It’s not just the sprinters’ mobs involved either. The general classification contenders are towed to the front, hopefully out of trouble.

We then saw a shape-shifting face to the peloton: Bora-Hansgrohe, Astana, Katusha-Alpecin and Wilier Triestina hit the front into the closing kilometers. 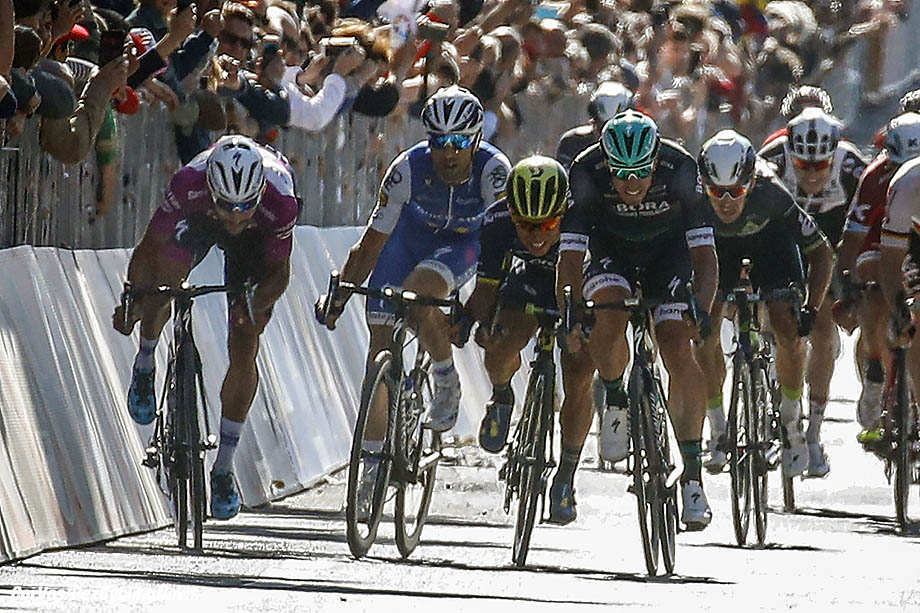 The Finalé
Quick-Step Floors and Lotto-Soudal then sent their gladiators forward, and Sam Bennett appeared for Bora. The Irishman took the final corner well and the stage looked his until Gaviria turned on the boosters and roars through for a fourth stage win in this Giro.

The Colombian’s lead-out didn’t quite seem to be on-point (possibly because Richeze was fencing with Caleb Ewan) and he came from a long way back to win. It looked like Gaviria employed Mark Cavendish’s trick of going once, and then again to rocket to the line. Maybe Cav, Kittel and co. are watching and thinking: “Dammit, this kid’s only going to get better!” 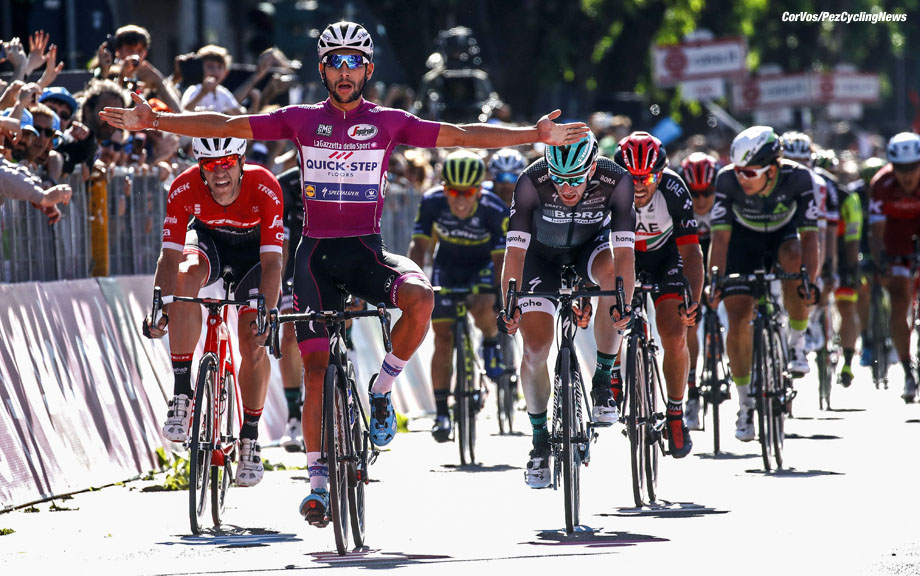 On the overall front, it was a pipe and slippers day for Tom Dumoulin (Team Sunweb) but tomorrow’s stage finishing at Oropa might be rather different. Keep it PEZ!

Stage winner Fernando Gaviria (Quick-Step Floors): “It’s been a different sprint today and a difficult sprint indeed but thanks to my team I managed to go back up and win one more stage. I’m now the Colombian with most stage victories at the Giro but it doesn’t mean much. To me it means that I came to the Giro well prepared.”

Race leader Tom Dumoulin (Sunweb): “The wind made me nervous sometimes. For most of the day it was side wind. In the finale it was more side head wind. But I was very well protected by the team so it was another good day for us. I think Oropa is a climb that suits me well so I hope to be in the Maglia Rosa again on Sunday.” 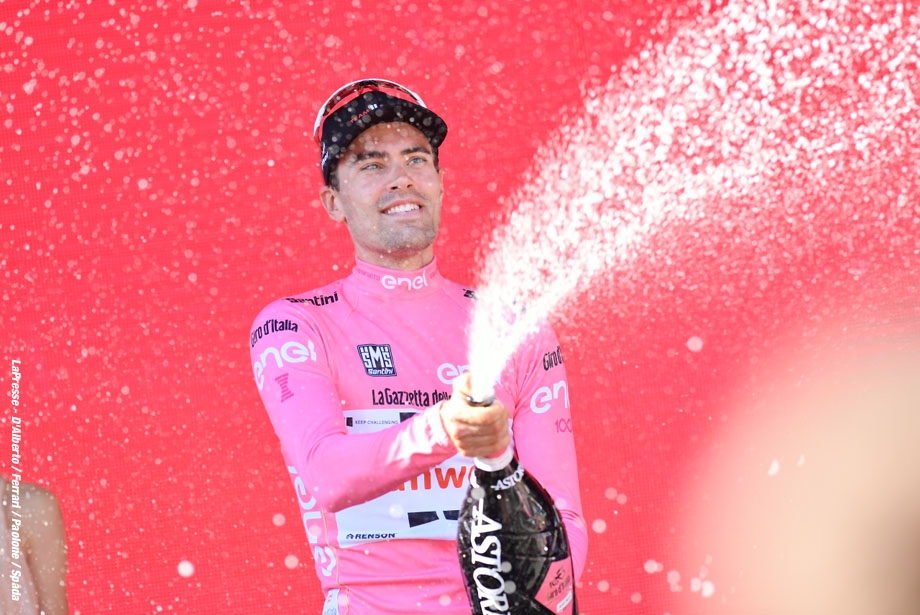