Giro Stage Report: It has taken over two years and countless breakaways, but Pierre Rolland’s quest for his 10th victory finally came on the climb into Canazei where he soloed home to a popular win on Stage 17. Tom Dumoulin came in with all the other GC men – No change in the overall. 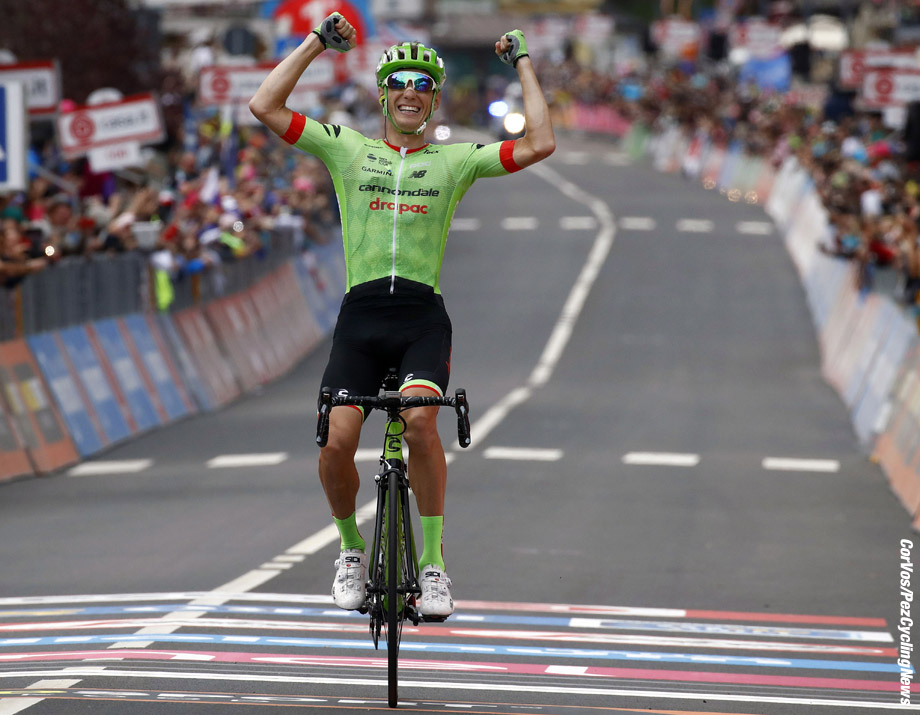 After yesterday’s drama filled race, which saw Vincenzo Nibali clinch the queen stage and Tom Dumoulin nearly surrender the maglia rosa due to an ill-timed comfort break, today was bound to be less eventful, or so we expected. 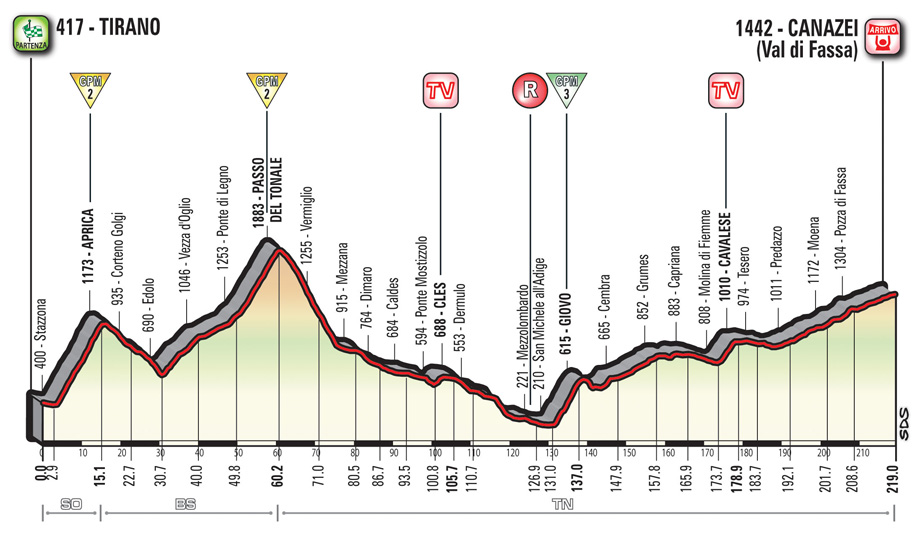 There were clearly tired legs in the peloton today after yesterday’s epic stage which featured over 5000 metres of climbing. The oldest rider in this years race, Svein Tuft, who celebrated his 40th birthday during the first week said yesterday’s Stelvio stage was amongst the hardest he had ever done.

If yesterday was tough then today was not going to be plain sailing either. With the opening climb of the Aprica coming so early in the stage the whizz of rollers and turbo trainers could be heard near the startline as riders sought to loosen out the legs before the battle commenced. 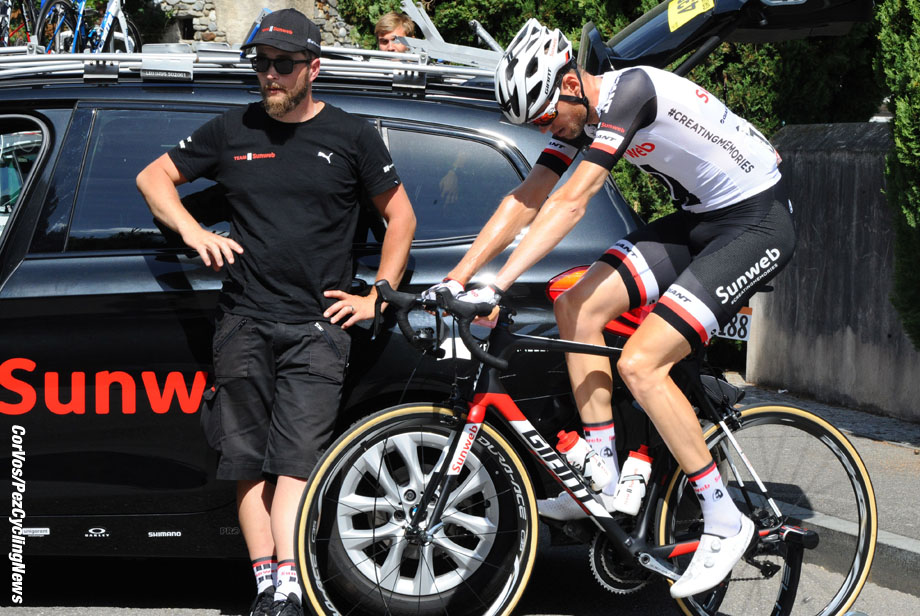 Tom Dumoulin appeared somewhat more relaxed than yesterday evening as he made his way to the startline. The Dutchman now holds just a thirty-second advantage over Nairo Quintana heading into the closing stages. As the debate continued about whether or not the other GC favourites should have waited for Dumoulin or not after his comfort break, the flag finally dropped and the racing got underway.

With fireworks expected from the beginning today there was a sigh of relief from many in the peloton as a three man breakaway floated off the front without much chase and quickly established a two minute lead. This group was composed of Pierre Rolland (Cannondale-Drapac), Pavel Brutt (Gazprom-RusVelo) and Matej Mohoric (UAE Team Emirates). 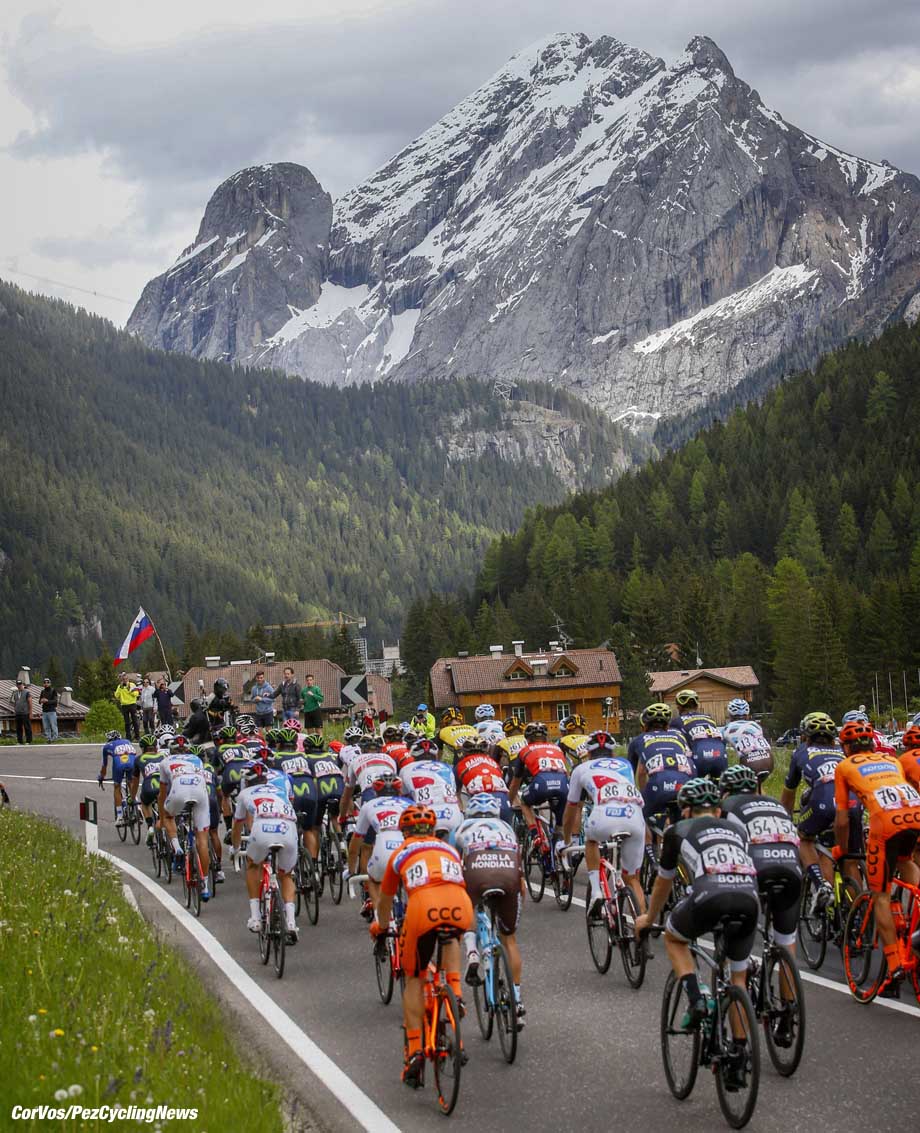 With only three leaders up the road many teams felt the need to present themselves in the breakaway and a flurry of attacks began on the lower slopes of the Passo del Tonale – the second climb of the day. This chasing group amounted to over forty riders and would make contact with the three riders in front later in the day. 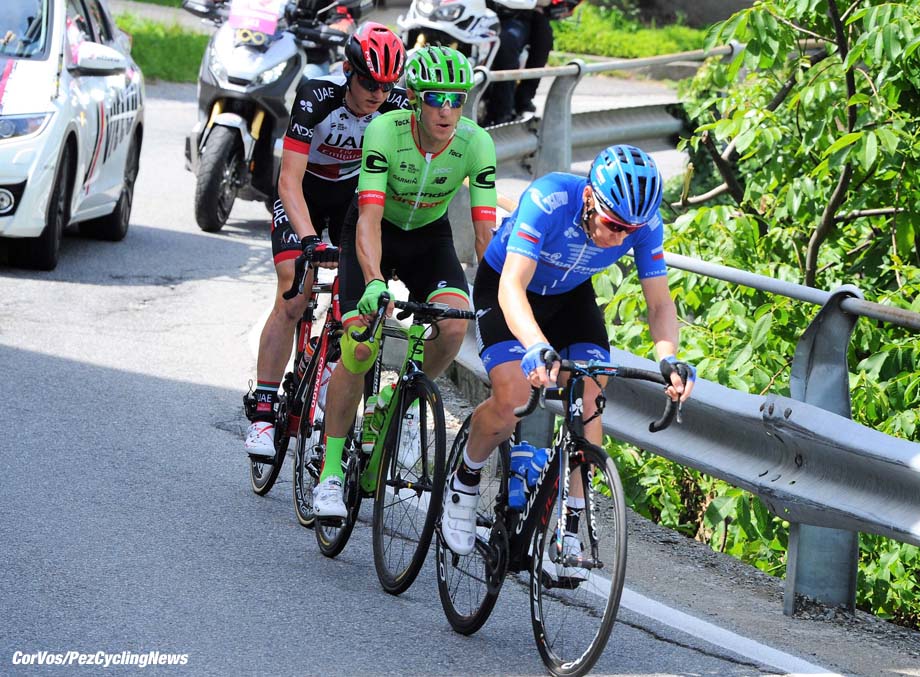 Rolland, clearly on a good day, led the leading trio over the top of the Passo del Tonale as the gap to the peloton ballooned to over 10 minutes. After yesterday’s intense GC battle, today it was going to be left to the breakaway to do the really hard riding, with the peloton taking a rare easier day.

There were clear signs of fatigue at the head of the race when Pavel Brutt, the rider who has spent more kilometres out front than any other rider in this Giro, sat up completely from the breakaway, clearly exhausted from his efforts and hitting the wall. 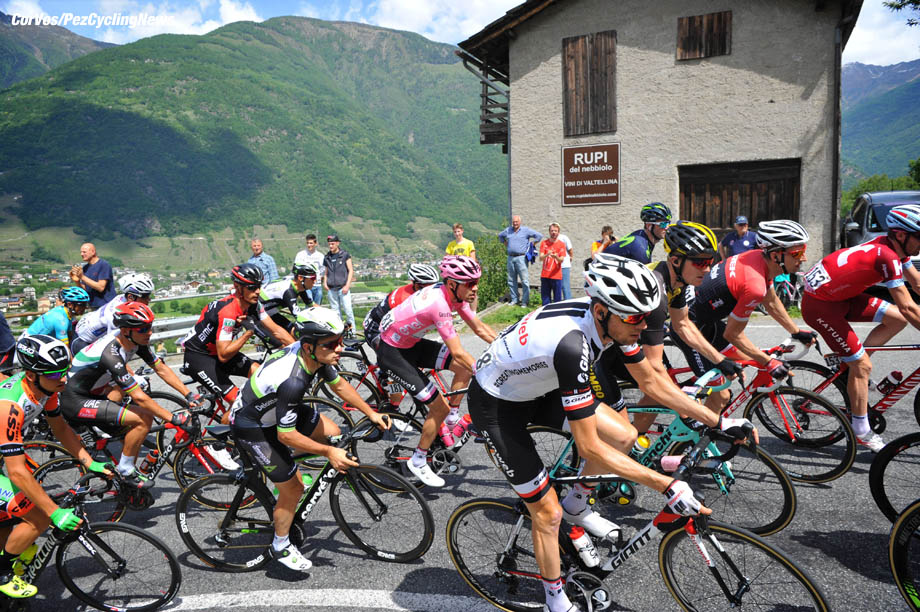 There were no such meltdowns for any of the stage contenders from the chasing group who turned on the heat as the race entered the final 100km. Present in this stellar group were De Plus, G.Izaguirre, Devenyns, Busato, Sutherland, Van Garderen, Van Rensburg, Rui Costa, Conti and Woods all being the main protagonists.

At this stage of the race we had two groups on the road: a lead group of 25, and then the peloton containing all the GC favourites, 10:45 back. 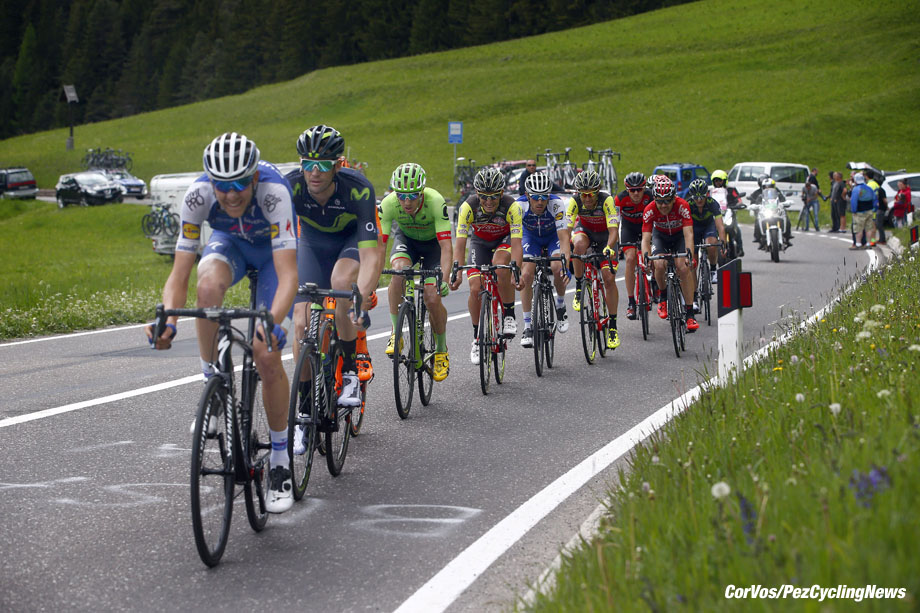 As the race entered the final 20km the big attacks began. Omar Fraile was the first rider to hit out of the breakaway with 18.5km to go. With a buffer of 7:30 over the peloton cooperation to stay away was no longer an issue as the relentless attacking and counter-attacking ensued.

American hearts fluttered briefly as it looked like Teejay Van Garderen was moving away in a strong six-man move but it eventually amounted to little, with his chances of success in this Giro looking ever less likely.

Just when it began to look like a momentary truce would be called on the attacks, Pierre Rolland launched a stinging move with 10km to the line which left the other riders looking at each other. 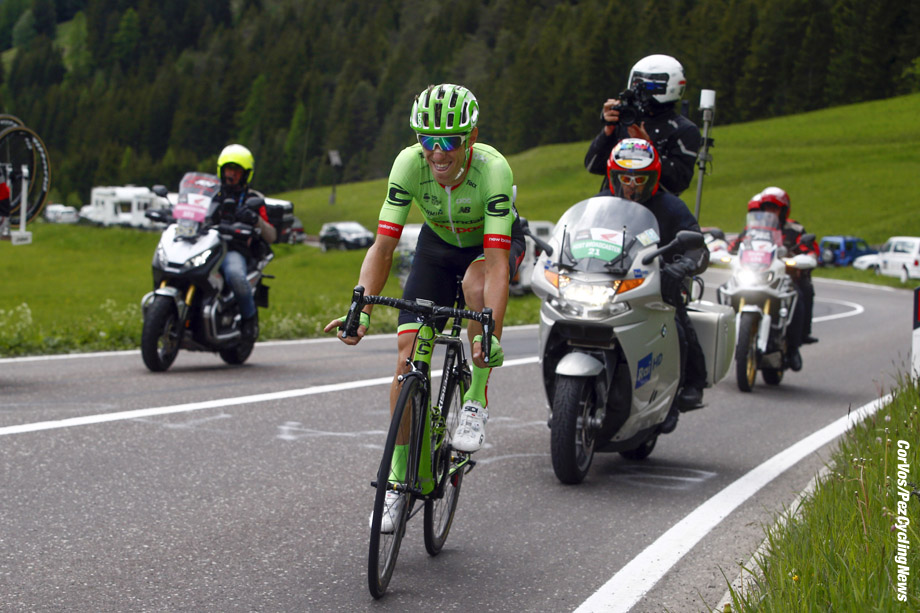 With no immediate response from the breakaway, Rolland was able to forge himself a ten-second gap quickly as his teammate Michael Woods disrupted the chase behind. If anything was to get the French media commentator excited it was this – a Frenchman coming home for a solo stage win, the first French win of this years’ Giro.

As Rolland powered under the 5km to go banner he held a twenty second cushion as it began to look more and more likely that his perseverance in his hunt for a stage win had finally paid off. As Rolland threw his arms in the air there were loud cheers from the Italian tifosi and deafening silence from Rolland’s critics. 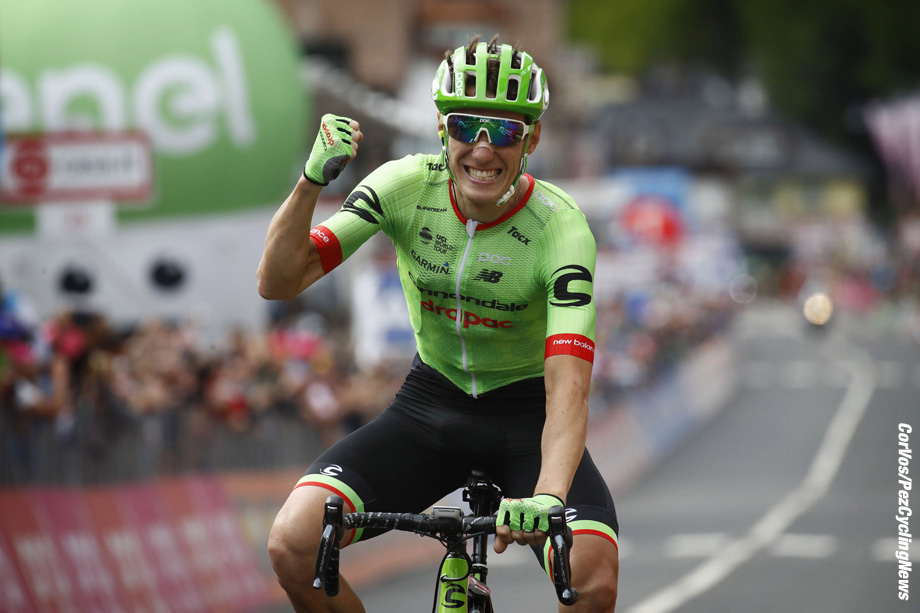 Stage winner Pierre Rolland (Cannondale-Drapac): “I’m so happy. I’ve waited for this moment for such a long time. I had a complicated season last year. I’ve had to try many times to get the victory I was looking for. I was in the first breakaway today but it was a good decision to let it go and wait for the next attack after two climbs. At the end it was a question of courage. I caught the right moment. It’s a huge relief.”

Race leader Tom Dumoulin (Sunweb): “I virtually lost the Maglia Rosa today but we were never worried. We just had to chase harder than we expected. I knew other teams would stress for their jerseys, and come to help. But they waited very long to pull. It was their decision. Polanc passed a few riders on GC. My boys did an amazing job and my jersey is safe.” 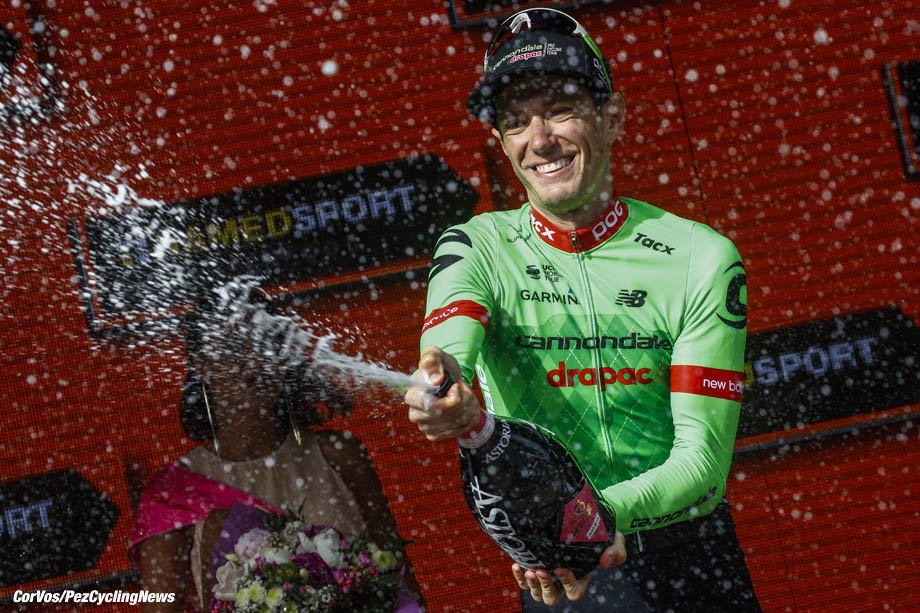 # Keep it PEZ for all the Giro news and up dates with video in EUROTRASH Thursday. #