Giro Stage Report: If you want polemica, this stage has it in bucket-loads! Kiss-and-make up, confusion, mayhem, arguments, claim and counter-claim, climbing, cracking, struggle and guts. Right now, we know that Mikel Landa (Team Sky) finally got his stage win after a week of hard graft, and we know that the race leader with two days to go is Nairo Quintana (Movistar). That rather bald statement covers a wild and wonderful afternoon of racing, in a Giro that looked done and dusted just three days ago. 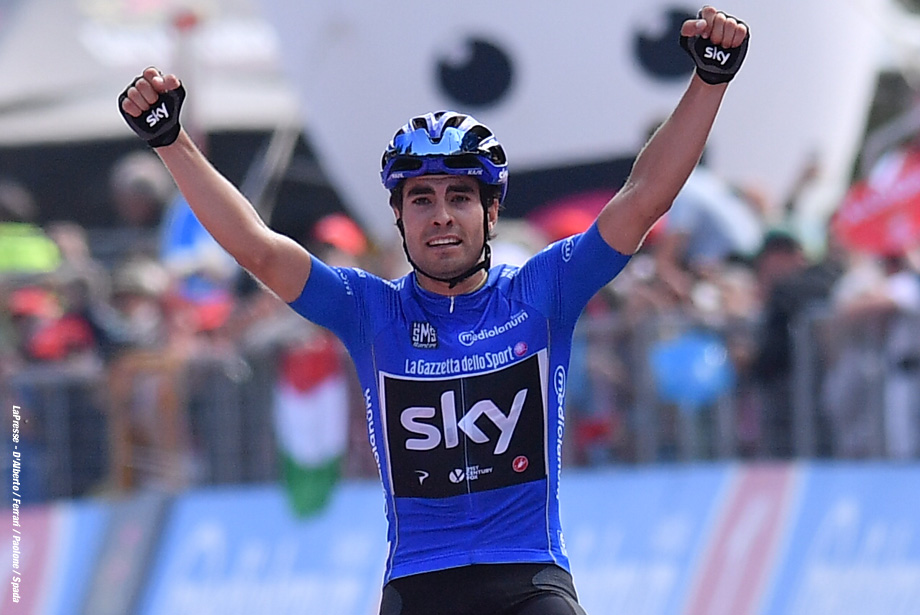 Tom Dumoulin (Team Sunweb) staged a brave defense of his pink jersey, and with one tough stage in the hills and a half-hour of hell time trial on Sunday, anything could happen yet. Right now, we have six riders within 90 seconds of each other. 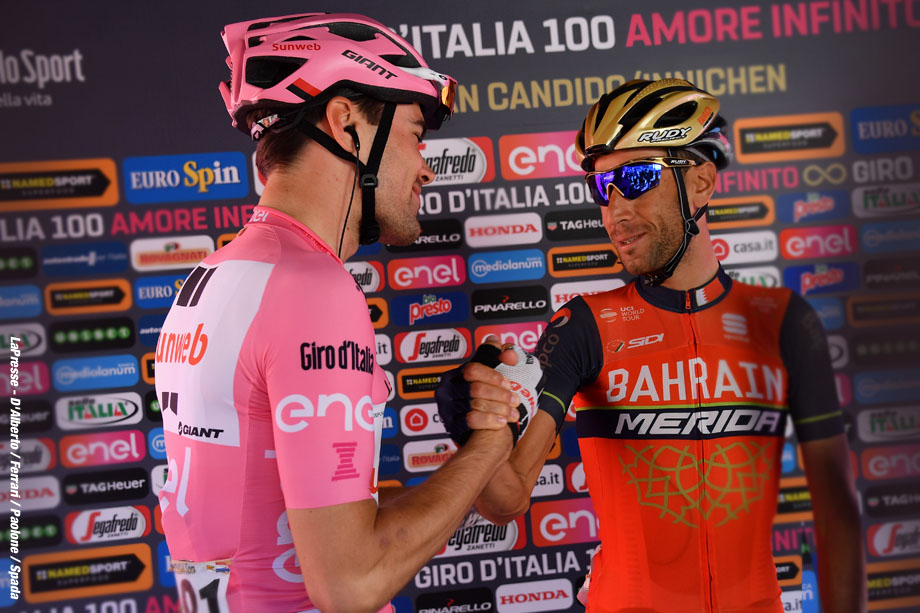 Before the stage, Vincenzo Nibali (Bahrian-Merida) and overall race leader Dumoulin appeared on RAI to say that all was good between them after yesterday’s tactical and sporting spat. A shake of the hands and mutual respect dialed up to maximum saw us good to go.

We had 191 kilometers on tap, for a frothy, creamy “middle-mountain” stage – one third-category climb, one second-category climb, and a final first-category haul, 15 kilometers and steep at the bottom – to the line in Piancavallo. Lots of descending, stunning scenery, and potential traps for the unwary contender. 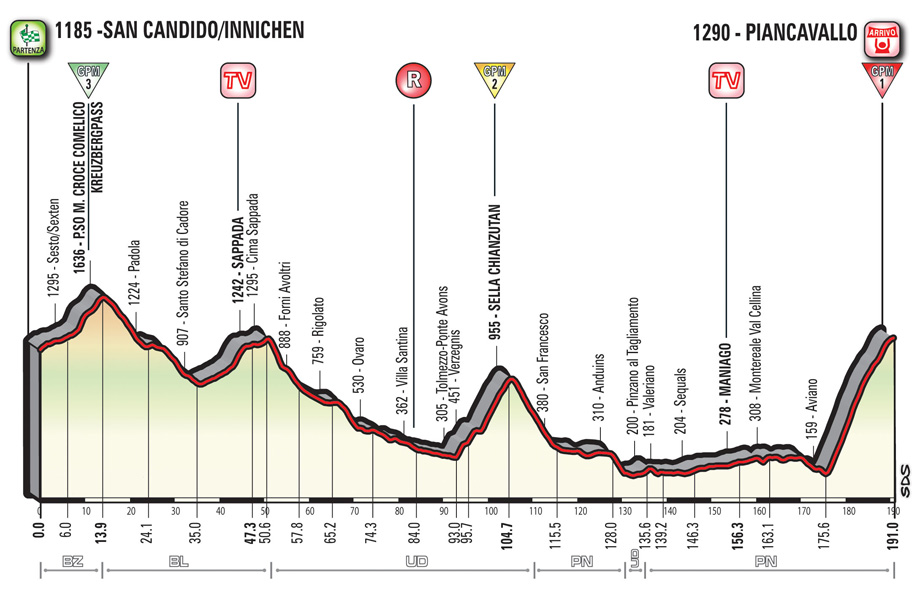 How it went down:
Another short, sharp, shocker of a stage. Riders were warming up on the rollers and … BAM! The action started from the flag, with a quintet racing clear, quickly down to a trio (Teklehaimanot, Bilbao, Paterski), and then up again to a group of 14. This escape had over four minutes going over the first categorized climb of the day (Kreuzbergpass) and through the intermediate sprint at Sappada (47 kilometers raced).

Next, all hell broke loose. Dumoulin, the maglia rosa, was caught out somehow, behind the other favorites, who collectively slammed the accelerator down.

Dumoulin saw his Sunweb team shredded, but didn’t appear to panic. The time checks were flying: he was down two minutes, then 20 seconds, then a minute. The frantic pace basically did for the escape as it pulled them to heel too quickly, with Bahrain-Merida (Nibali), Movistar (Quintana) and FDJ (Pinot) riding flat-out. 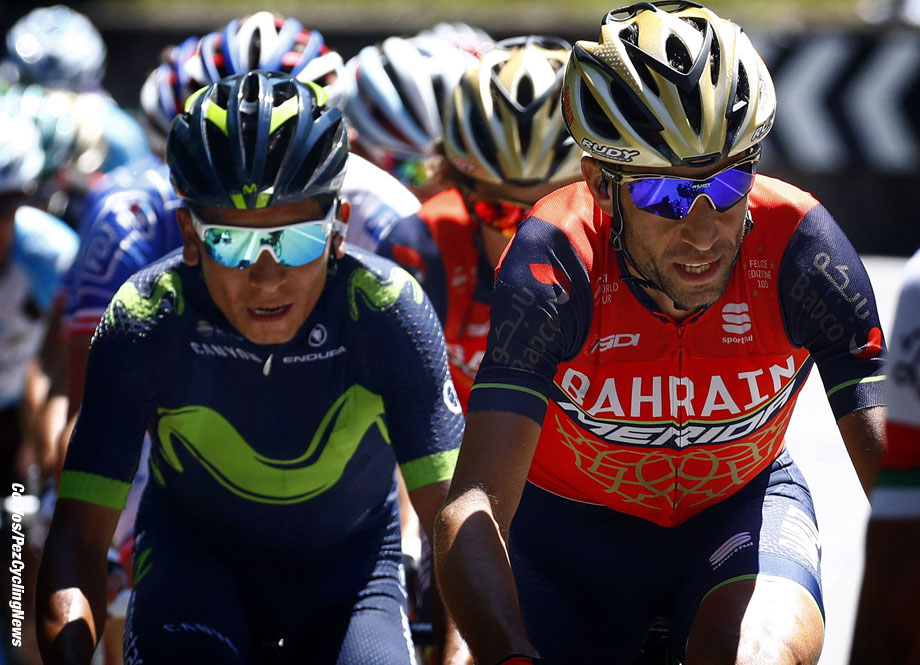 Claims were being thrown around that Dumoulin had taken a comfort stop, and the other teams had attacked, that Movistar’s JJ Rojas had somehow been involved in instigating an attack … but later stories suggested he was just in the wrong place at the wrong time. Dumoulin then got some help in his salvage mission from LottoNl-Jumbo, Orica-Scott and even UAE Team Emirates, and the gap gradually came down.

Just over half-distance, the main escape was caught by a group including Quintana and Nibali, while Dumoulin paced himself back into contention, latching on with 90 kilometers to ride.

Astana’s LL Sanchez then prompted a new escape as the main favorites eyed each other suspiciously. A chasing group including Landa, Ruben Plaza (Orica-Scott) and Bahrain-Merida’s Gio Visconti takes off after Sanchez and co.

Everything remains calm in the favorites group as they approach the final climb; up ahead, Landa has set Henao, his team-mate, to chase Sanchez down. This big escape had plenty time to fight out the stage win amongst themselves.

It was all about to kick off with the favorites: the main teams who had any sort of strength in depth left ramped the pace up, tearing to the foot of the climb. 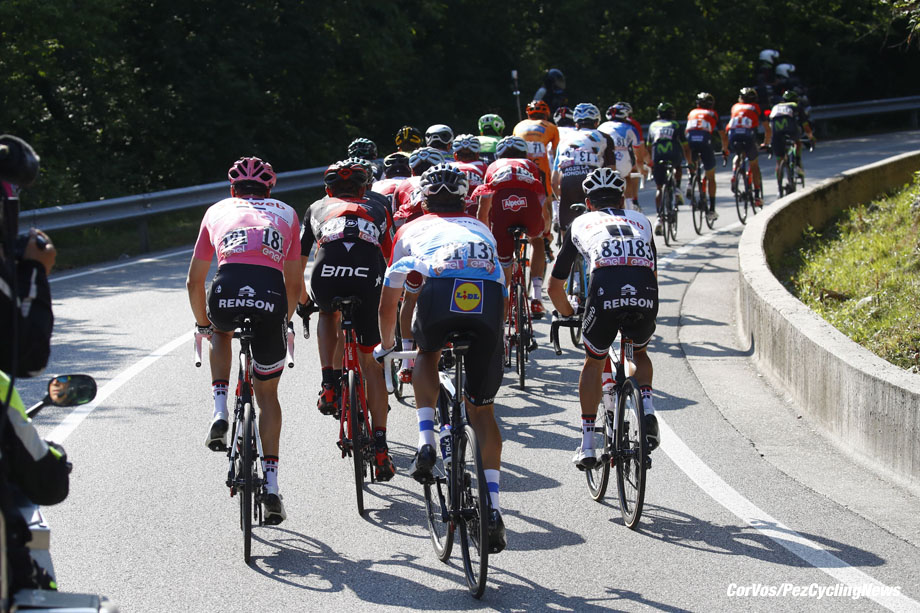 The race hit the lower slopes… and Dumoulin was dropped almost straight away, but with a couple of team-mates for support.

Inside ten kilometers to race, and Movistar and Bahrain-Merida looked to really stick it to Dumoulin who had revived and then let another gap open.

Geschke worked like fury for Dumoulin, but then suddenly, the gap was twenty seconds to Quintana and company. The Dutchman just tried to keep an even keel, not go too deep. 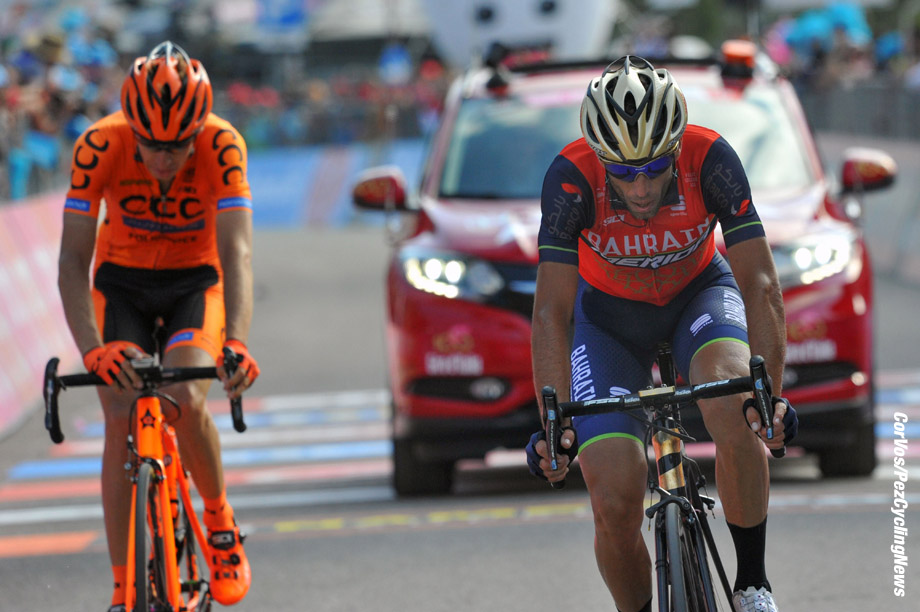 Then Quintana is gapped but gets back on, and everything stalls in the favorites’ group – Dumoulin grinds on. Pinot is barreling upwards, trying to put himself on the podium.

Just three kilometers remained when Zakarin jumped with Pozzovivo. Then Nibali and Quintana finally light it up …!

Landa sweeps home for the stage, and Pinot makes some gains, but everyone turns to the clock when Quintana comes home. No sign of Dumoulin for over another minute. Quintana is in the maglia rosa by 38 seconds! 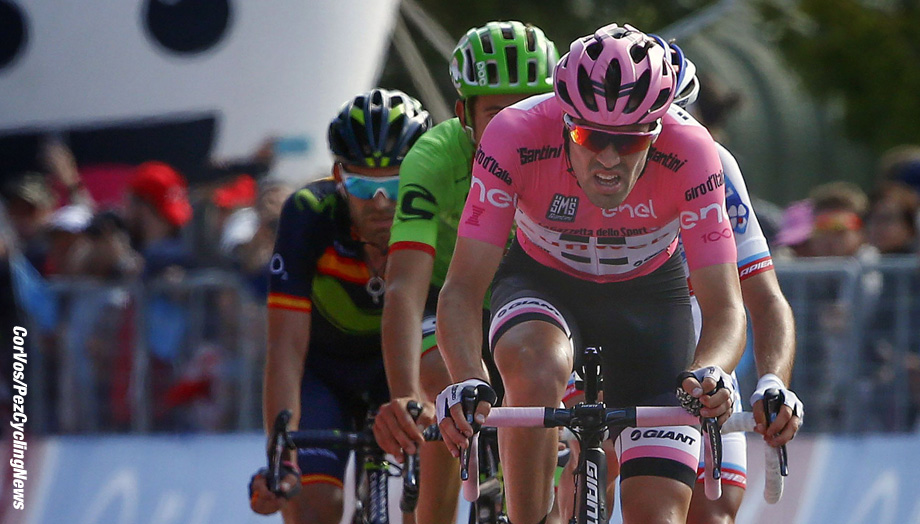 Stage winner Mikel Landa (Sky): “I felt huge emotion on the finishing line because I’ve had difficult moments in the past few months and, also, at the Giro with the crash – it has not been the Giro we expected. Now I’m very happy and proud; I made the right choices to go in the breakaway and to attack behind Luis Leon Sanchez, thanks to the work of my team mate Sebastian Henao.” 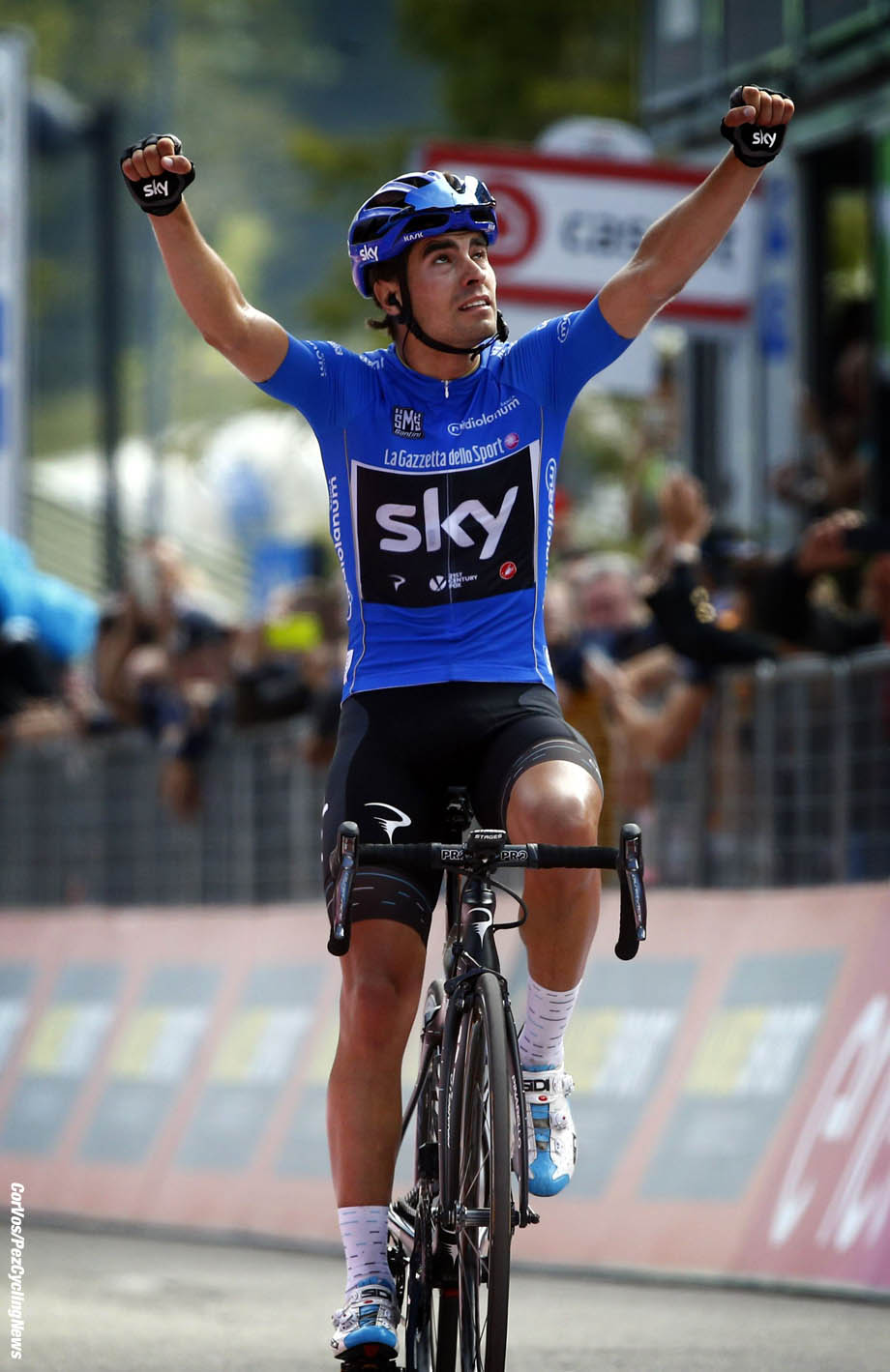 New race leader Nairo Quintana (Movistar): “I was feeling good but it’s been a hard day and a very competitive stage from the beginning. My teammates helped me to come here in a good position and I’m glad to take the Maglia Rosa. On GC it’s pretty complicated: we have to adapt the strategy day-by-day. Tomorrow there will be another important stage and then I’ll give it all in the time trial.” 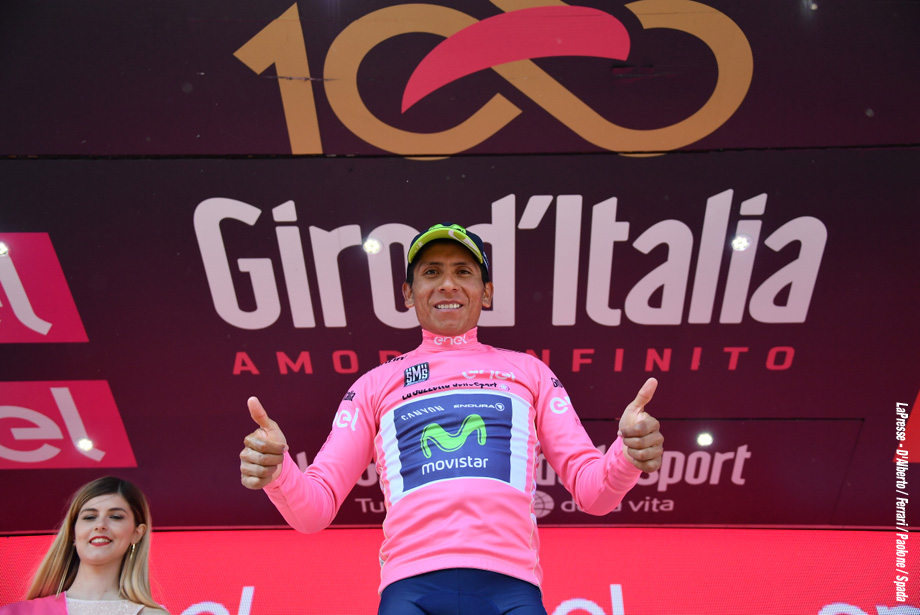 Incredible stuff, and what a cracking weekend we have in store to crown the winner in Milan. Keep it Pez!