Giro Stage Report: Slovenia’s Jan Polanc prevailed on Mount Etna to take Stage 4 of the Giro d’Italia after escaping early on a day that ended in stalemate for the race favorites. Bob Jungels of Luxembourg finished with the best and inherited the Maglia Rosa from his team-mate Fernando Gaviria. 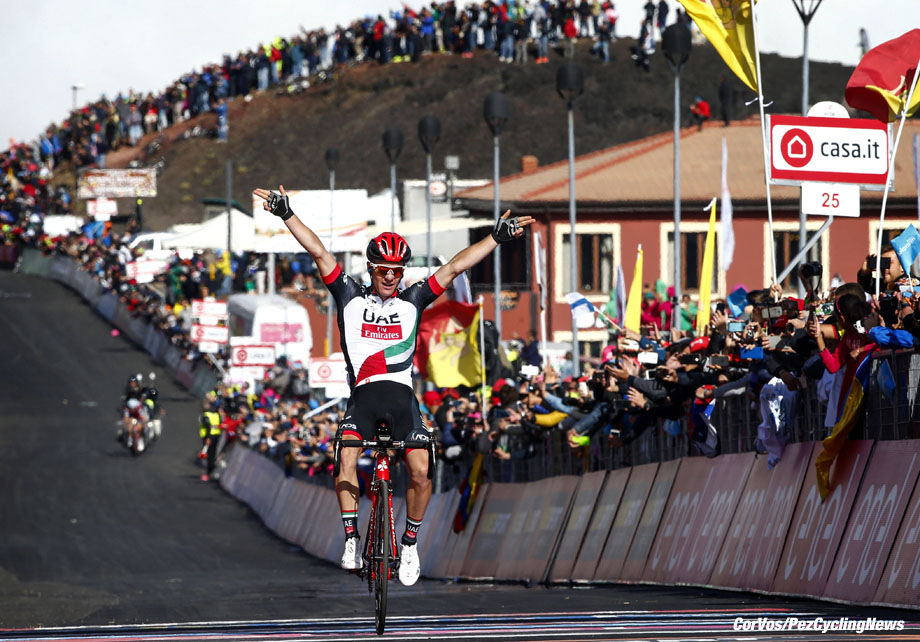 After a rest day, as the Giro d’Italia hopped from Sardinia to Sicily, ‘the Fight for Pink’ resumed this Tuesday with a 181 kilometer ride from the coastal resort of Cefalù to Mount Etna. The so-called ‘Volcano stage’ had been at the forefront of the riders’ minds ever since last Friday’s Grande Partenza under the sun of Alghero and many observers expected the race’s first big test to reveal the names of those capable of lifting the trophy in Milan.

As is customary at this early point in a Grand Tour, commentators in the press speculated with excitement about the prospects of the race favorites, predicting glory for their own champions. French sports paper L’Équipe felt confident that the ‘danseuse’ technique of Gallic ace Thibaut Pinot would prove too much for his rivals, while Dutch outlet De Telegraaf could envisage no other winner than Steven Kruijswijk, ‘the Eagle of Eindhoven’, though his compatriot, Groningen-born grimpeur Bauke Mollema, it added, might come a close second. Basque grandee Mikel Landa would relinquish all personal ambition and altruistically assist his Sky team-mate Geraint Thomas of Wales in achieving a memorable and career-defining victory—or vice versa, depending on whether one read the South Wales Evening Post or the Basque-language daily Berria. For the Colombian media, the question was not whether Nairo Quintana would win, but rather how many minutes ‘el Condor’ would put into his adversaries. The local gazettes, of course, fully expected defending champion Vincenzo Nibali, ‘the Shark of Messina’, to swallow his opponents whole. 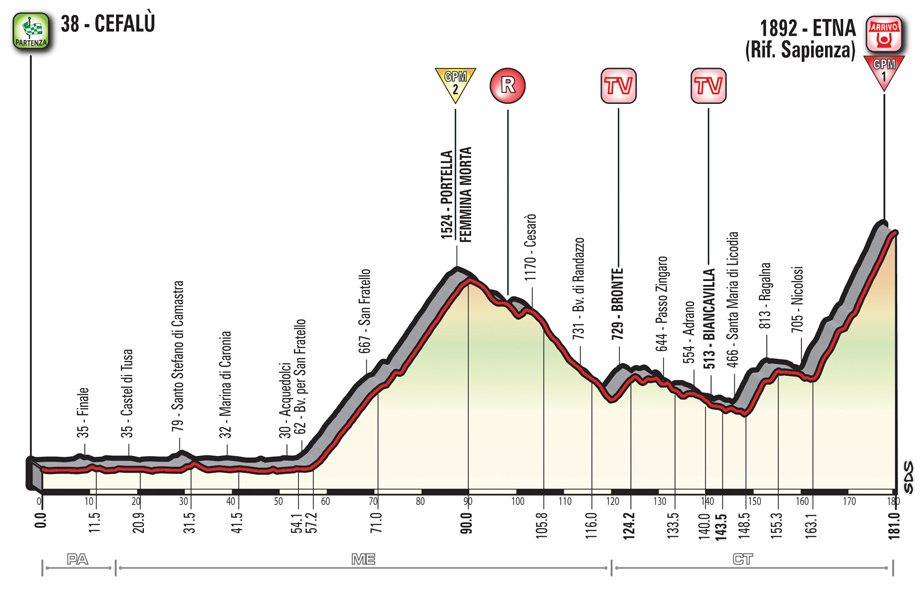 Featuring in the Tour of Italy for the fourth time, Etna—escalated, on this occasion, from the south along a meandering 17.5 kilometer-long road to Refugio Sapienza boasting a 7 per cent average pitch with spells of 14 per cent—looked certain to turn the General Classification on its head.  “For three days the leading characters in this Giro d’Italia have been looking for a theater”, journalist Barry Ryan wrote.  Now, on the slopes of the Mediterranean island’s highest and most fabled mountain, described by his peer Chris Fontecchio as a “heavenly hellscape”, they would find it.

To those worried about cycling up one of the world’s most active volcanoes, which erupted as recently as April, unleashing apocalyptic plumes of smoke and incandescent flows of lava on the neighboring countryside, local rider Paolo Tiralongo, ‘the Bee from Avola’, offered these soothing words: “Usually when it blows, it does so towards the north-west, so we are OK.” 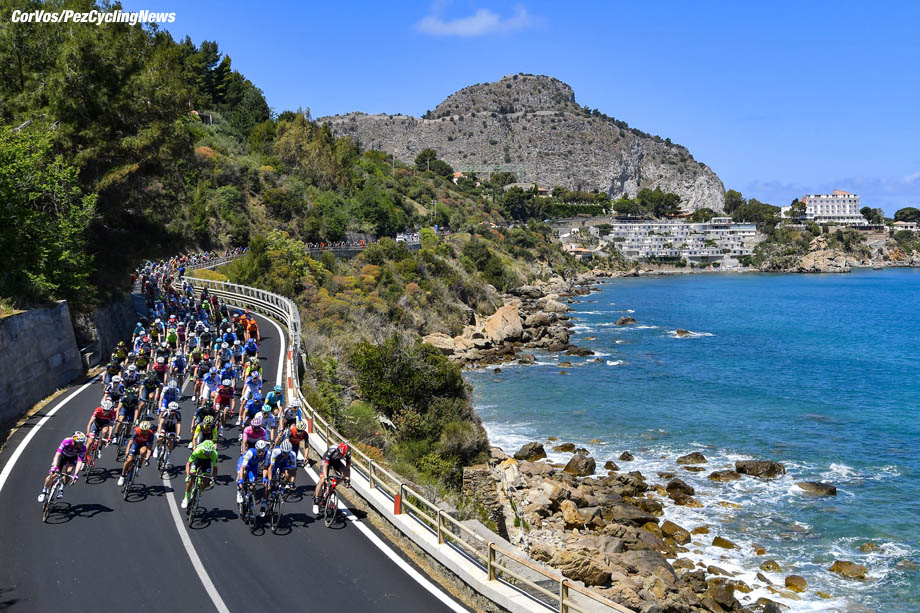 An Early Quartet
With that issue serenely settled, the participants could leave Cefalù and its palm trees behind them and wheel their way eastwards along the shores of the Tyrenian Sea, though not before observing a minute’s silence in memory of Wouter Weylandt, the Dutchman killed in a crash on the roads of the Giro six years ago to the day.  Race leader Fernando Gaviria of Colombia, a sprinter by trade, always looked unlikely to hold on to the Maglia Rosa on a day destined to the climbers and in the opening kilometers his Quick-Step formation imposed no more than a mild pace at the front of the peloton, allowing other riders to escape into the distance.

In no time, four men found themselves in a break-away with a lead of five minutes. Eugenio Alafaci (Trek-Segafredo), Jacques Janse van Rensburg (Dimension Data), Jan Polanc (UAE Team Emirates) and Pavel Brutt (Gazprom-RusVelo) must have known that the prospect of one from their ranks pulling a Pöstlberger at the summit finish seemed remote, but the opportunity to attract attention on this anything but ordinary stage of the Corsa Rosa’s hundredth edition had proven too enticing. 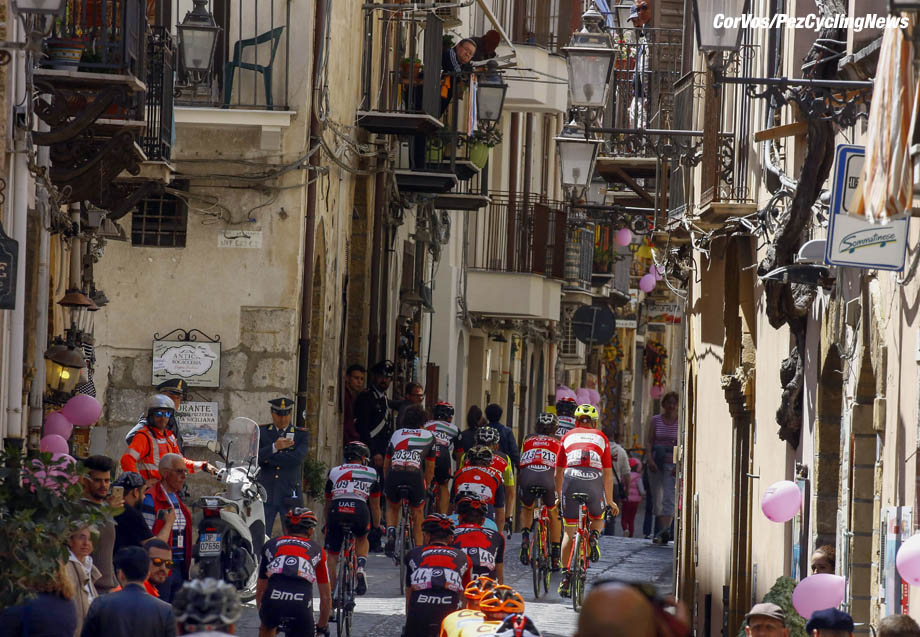 Polanc Mortified
Soon, the beachside promenade, ridden in warm but far from unbearable weather, came to an end and the race turned southward to head for the first of the day’s two ascents, the second category Portella Femmina Morta, at 32 kilometers in length the longest in this year’s Giro. Its mellow and barely fluctuating gradients, however, all but ensured an uneventful procession to the summit.

The four fugitives reached the foot with a comfortable advantage of seven minutes and this only increased in the early part of the climb, as Gaviria’s guard gradually ran out of motivation. However, the men in blue subsequently received the support of Nibali’s red-clad Bahrain-Merida gregari and thereafter the gap started to shrink.   Meanwhile, news filtered through that Australia’s Rohan Dennis, a former Hour record holder, had withdrawn from the race. The co-leader of BMC, who had hit the deck on Stage 3 in Sardinia and lost time in the crosswinds, left his American colleague Tejay van Garderen as the team’s sole leader.

At the summit of the Femmina Morta, Van Rensburg sprinted to the line to scoop fifteen points in the King of the Mountains competition but his first place was clouded in controversy, as the South-African appeared to swerve irregularly to the right to impede Slovenia’s Polanc, who came second. The two men engaged in a shouting contest as they made their way down the descent, disrupting the harmony within the break-away and further damaging its chances.  Losing Losada.   As the peloton rushed downhill, heading for the final difficulty of the day, picturesque Sicilian towns and villages flitted by in a blur of curious shopfronts, comely market squares and mysterious alleyways. Shortly before the entrance of Bronte, a cruel plot twist saw Spain’s Alberto Losada lose his balance and hit the tarmac. Such was the violence of the impact that his rear wheel became detached from his bike and continued speeding down the ramp by itself. A doctor present at the scene examined the Katusha rider’s shoulder and shook his head, leaving no doubt that Zakarin’s team-mate was out of the race. However, Losada refused to listen and opted to continue.

At the front, four became three as the mustached Italian Alafaci could no longer live with the pace of his companions, losing contact at Biancavilla, just over forty kilometers from the finish. Russian veteran Brutt, in the cobalt blue of Gazprom, came first in the two intermediary sprints in the valley, picking up points in the race for the cyclamen jersey. 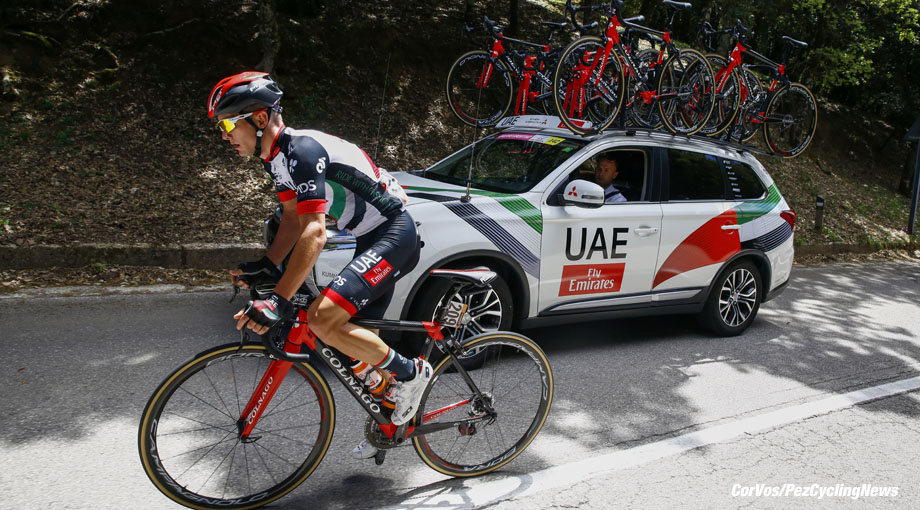 Then the road began to rise, as the Lovecraftian sight of a towering, menacing, wall-like mountain capped with snow loomed on the horizon. Sicilian shrubbery gave way to bare black rubble, the so-called ‘terre nere’. The battle of Mount Etna was imminent.   Tatar Tumble   Brutt immediately felt the heat, receding rapidly and leaving Polanc and Van Rensburg to settle their differences, with what seemed a hardly sufficient lead of four minutes over the pack.

Behind them, the Orica formation, riding for British hopeful Adam Yates, joined the chase at the head of the peloton, further increasing the tempo. Valerio Agnoli, Nibali’s loyal lieutenant within the Bahrain-Merida team, lead over the cobbles of Santa Maria di Licodi, spearheading what looked increasingly like a pyroclastic surge pursuing the remaining escapees at a terrifying speed and promising them a Pompeian fate.

The race favorites rubbed shoulders and jockeyed for position as they neared the small township of Nicolosi and the foot of the climb. A crash on a curve threw Katusha’s Ilnur Zakarin to the ground but the Tatar sprang to his feet fast and climbed frantically back onto his bike.  Race to the Crater
On the lower slopes of Mount Etna, Gaviria — who had thus far defended his pink jersey with distinction – finally had to admit defeat. Van Garderen, frustrated by a mechanical incident, also fell behind, as did Mikel Landa, who had to borrow a wheel from one of his Sky domestiques, but both succeeded in reintegrating the elite group after some chasing. 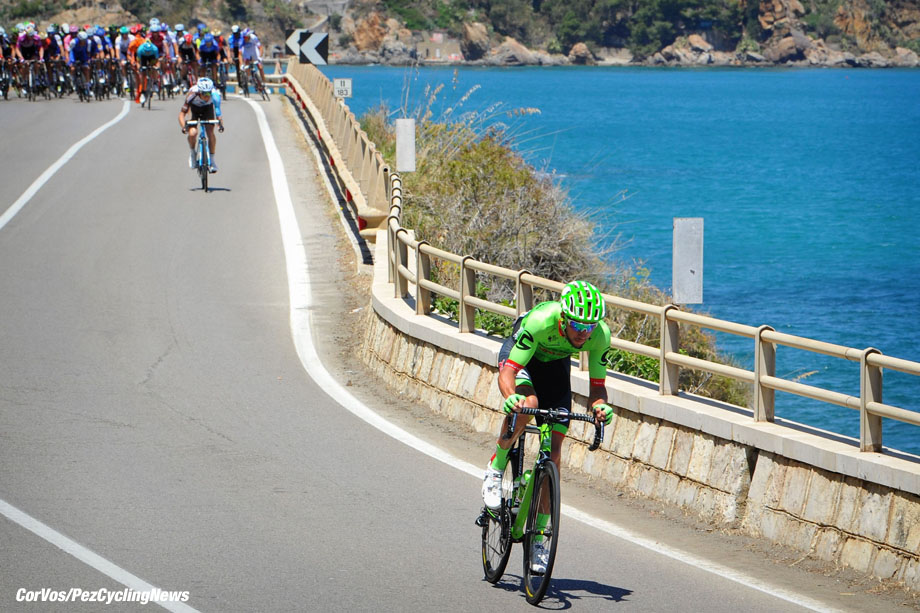 Astana’s Tiralongo went on the attack at the front of the bunch, soon imitated by Cannondale’s Pierre Rolland, but neither could remain ahead for long. Igor Anton’s attempt proved equally fruitless.  Polanc, the sole survivor of the day’s break-away, struggled to hold on to his lead as he progressed up the wide mountain road, battered by fatigue and the effects of altitude, but behind him the favorites, united in mutual defiance, neutralized one another and when the Slovene reached the entrance of the flatter final kilometer he began to believe in his star.   Nibali accelerated, but Quintana immediately jumped onto his wheel. Astana’s young Danish prodigy Jesper Hansen also made a move, but to no avail. As the Rifugio Sapienza — situated at an altitude of 1,892 meters—came into view, Dutchman Tom Dumoulin attacked and Zakarin responded, setting off in pursuit of Polanc. But it was too little too late, as the UAE Team Emirates rider crossed the line the most relieved man in Sicily. 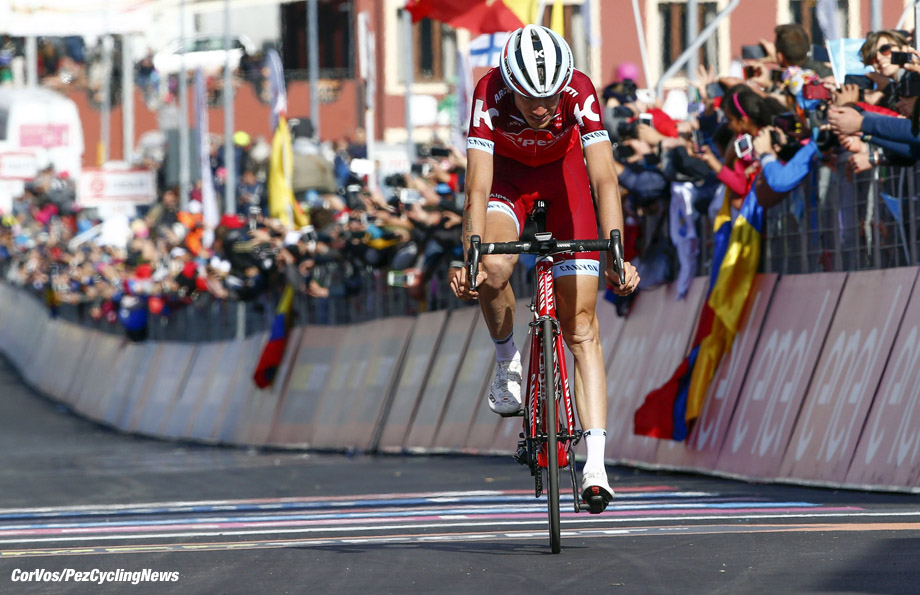 Zakarin did pick up bonus seconds by coming in second, and Thomas completed the podium in third.  History repeated itself when Luxembourg’s Bob Jungels inherited the Maglia Rosa from his Quick-Step team-mate Gaviria, just as he had done from Italy’s Gianluca Brambilla last year. The twenty-four year old smiled radiantly as he pulled on the coveted garment but after today’s stage, which failed to deliver the drama many had hoped for, his lead in the General Classification is minimal. 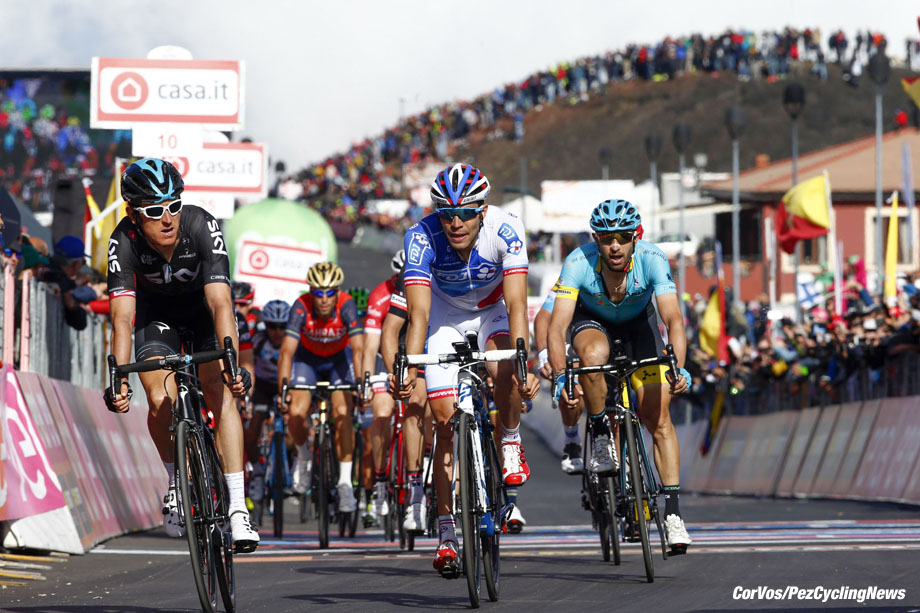 Stage winner Jan Polanc (UAE Team Emirates): “It’s amazing. Probably nobody expected the breakaway to succeed. We were only four guys to make it work and we didn’t have a big gap for the last climb. It was probably the hardest day of my life. I’m very happy. To repeat the victory I got in 2015 in the first mountain stage is wonderful.” 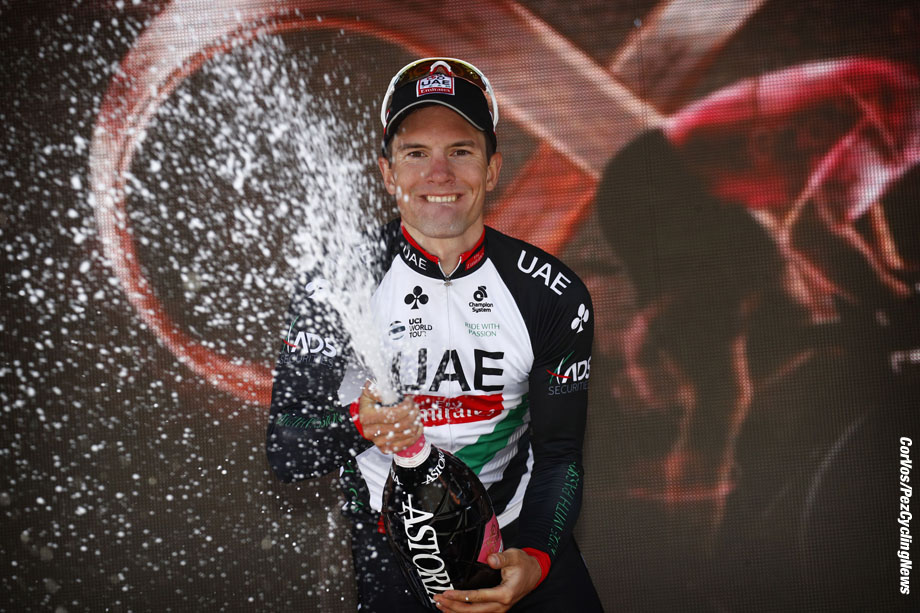 The new race leader Bob Jungels (Quick-Step Floors): “I didn’t really believe Fernando Gaviria when he said I’d take the Maglia Rosa over from him. It’s always a dream but you have to be a bit lucky. The team did a great job. We had be clever. I would like to keep the jersey for longer than last year but we have a big stage on Sunday at the Blockhaus. It will be more for true climbers like Quintana but I hope to stay in the lead as long as possible.” 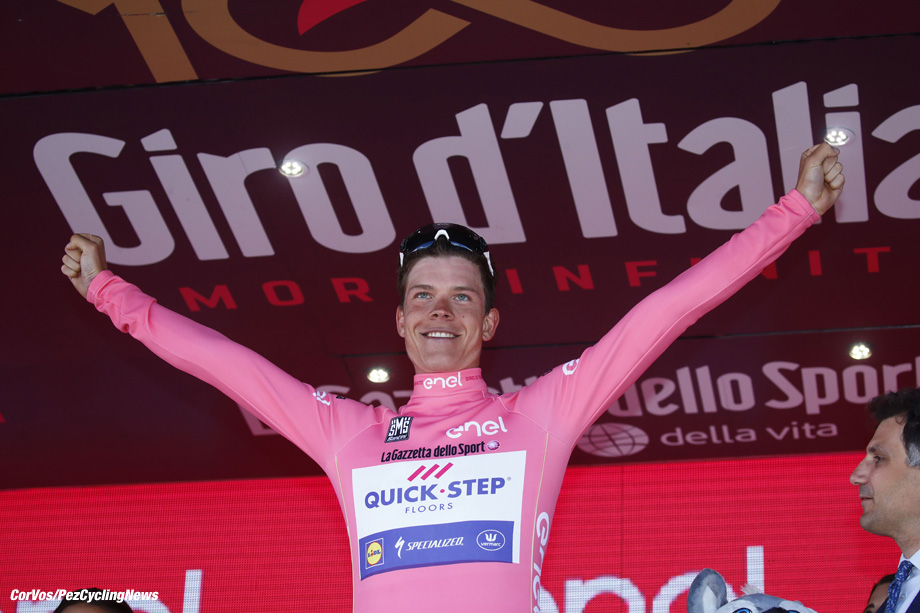