Giro Stage Report: Fernando Gaviria of Colombia sprinted to victory in the streets of Messina on Stage 5 of the Giro d’Italia, picking up his second bouquet in this year’s race after leaving it late to narrowly beat Jakub Mareczko of Italy and Irishman Sam Bennett, second and third respectively. His Quick Step team-mate Bob Jungels remains the race leader after an uneventful day on the roads of Sicily. 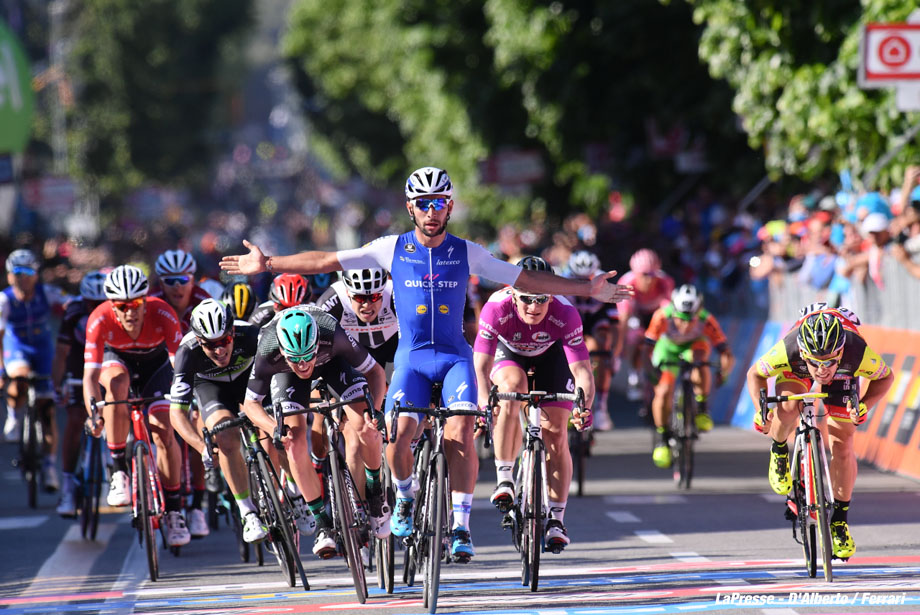 After yesterday’s damp squib of a mountain stage, some had hoped that today’s short and flat jaunt between Pedara and Messina would make up for all the disappointment by offering an unexpectedly gripping spectacle, something dramatic and worthy of an Alpine classic. They predicted fireworks on the fourth category climb to Andronico Sant’Alfio, a major offensive launched by Quintana perhaps, a perfectly timed push from Pinot, or a killer blow from Kruijswijk. Nibali might then deliver a masterclass in the descent, forcing his rivals out of their comfort zones and capitalizing on their every mistake. Along the coast of the Ionian Sea, devastating crosswinds would play into the hands of the echelon masters and reshape the General Classification beyond all recognition. A late attack by an expert finisseur like Thomas would be the icing on the cake. Where others had expected a humdrum transition stage, they foretold instead the queen stage of this year’s Tour of Italy in all but name. “The Fight for Pink”, they speculated, might be as good as over by the time the race moved to the mainland. None of them, however, it must be added, were sober at the time these predictions were made. Let him who can resist Sicilian wines, specifically Etna Rosso, cast the first stone. 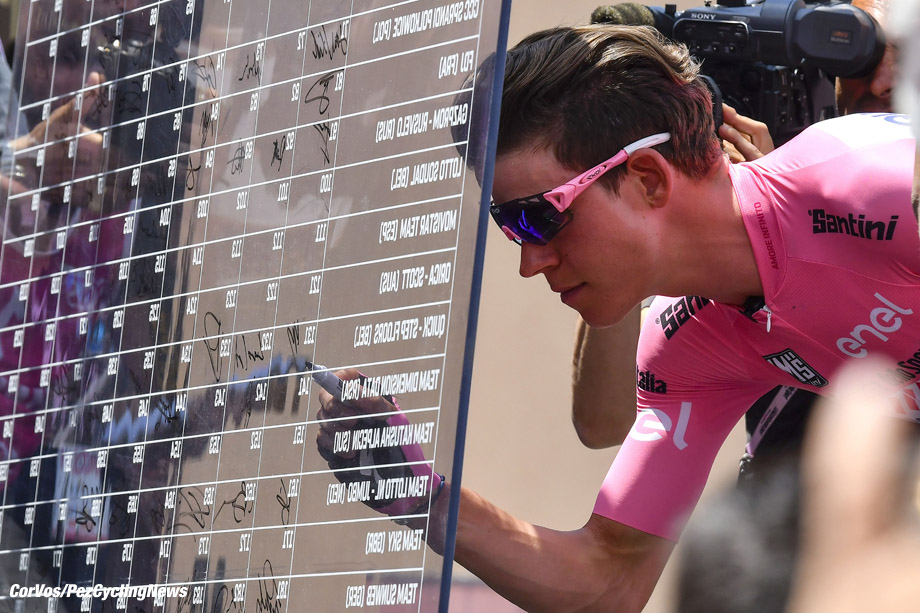 What the tifosi gathered at roadside under a warm Mediterranean sun actually saw today, needless to say, bore a depressing resemblance to previous stages of this year’s Giro, as caution once again took precedence over audacity. 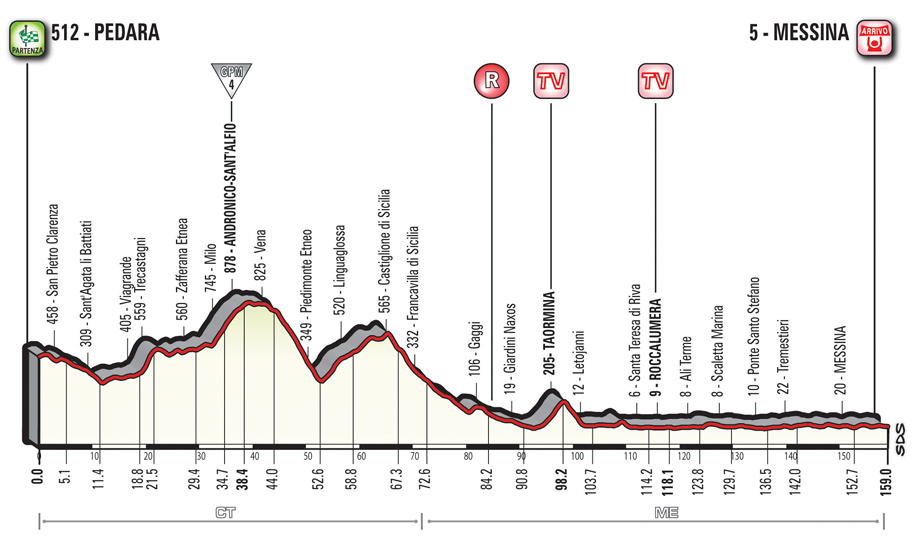 For this, Maciej Paterski and Evegeny Shalunov were hardly to blame: The Pole in the neon orange of CCC Sprandi Polkowice and the Russian in the sapphire of Gazprom-RusVelo held sway for much of the day, opening the way several minutes ahead of their peers as the race swept through the Sicilian countryside, from the foothills of Mount Etna to the island’s populous north-eastern tip.

Yet, the two of them could hardly hope to keep a peloton controlled by the powerful Quick Step formation at bay indefinitely. With the Maglia Rosa to defend and a possible stage victory for their Colombian sprinter Fernando Gaviria to play for, Wilfried Peeters’ men never looked likely to drop the leash.

The two east-European escapees took heart from the encouragements showered upon them by the many Sicilian spectators lining the road, aroused by the siesta-interrupting fanfare of one of the world’s great bike races. To tired ears, cries of “Viva Nibali!” are easily misheard as “Viva Paterski!”, and to weary eyes the azzurro of Italy is easily mistaken for the blue of Gazprom. 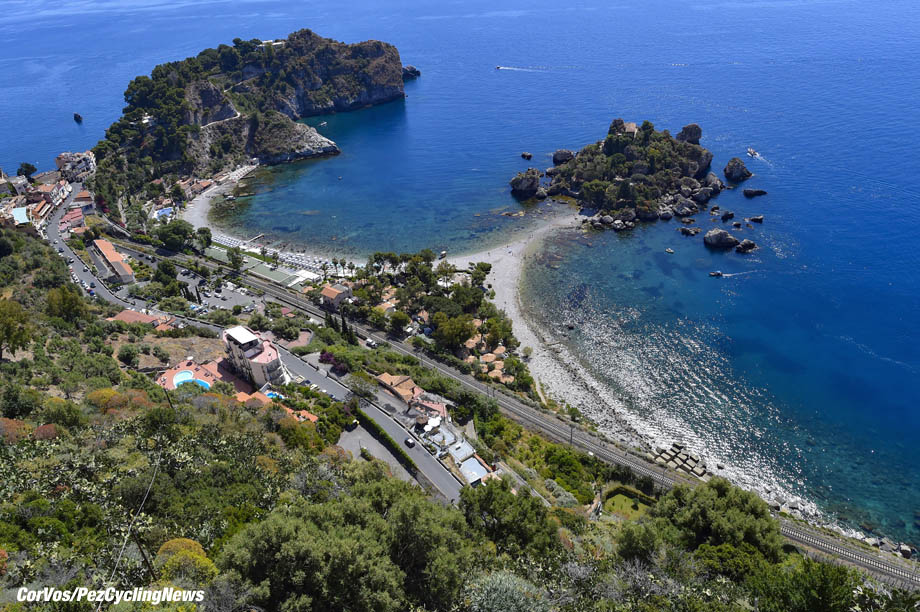 At the front of the bunch Lotto Soudal and Orica-Scott jerseys began to appear, indicating the appetite of Germany’s André Greipel — wearer of the Maglia Ciclamino — and Australia’s Caleb Ewan for stage victory.  The same could not be said of the Italian national champion Giacomo Nizzolo, visibly exhausted after the previous day’s mountainous ride, who struggled to keep up on the uncategorized climb to Castiglione di Sicilia and spent the rest of the day clinging on to back wheels. 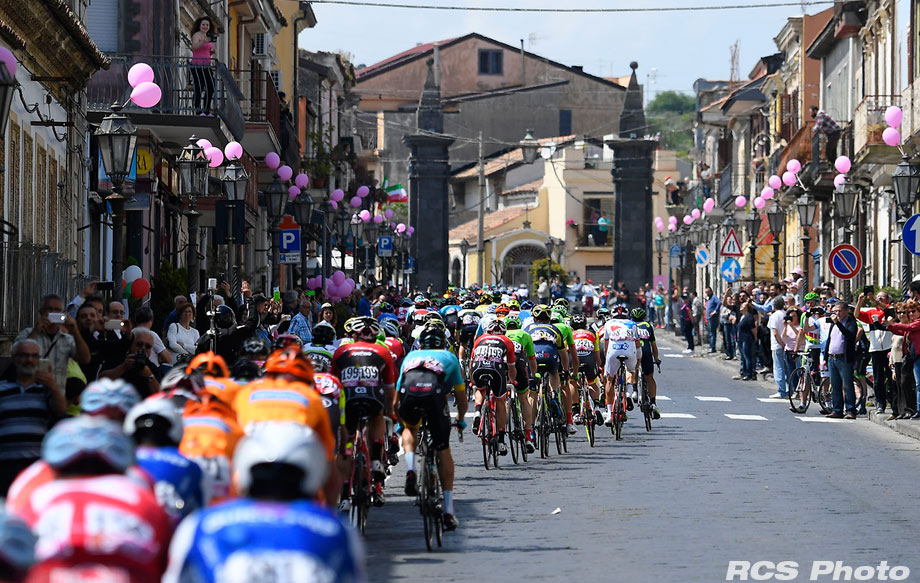 Making their way through townships decorated with pink bikes and under overhanging clotheslines weighed down by replica pink jerseys, Shalunov and Paterski regularly received news of their time advantage over the pursuing pack. At Linguaglossa, with over a hundred kilometers still to ride, 3 minutes and 30 seconds separated the two groups, and at the intermediary sprint in Roccalumera, just under 45 kilometers from Messina, the gap had shrunk by a minute. It dipped below 2 minutes with thirty kilometers remaining to the finish and then under the minute as the race entered the final twenty. As they whirled past the 15 kilometer banner, with the bustling city of Messina in sight, the escape came to an end. 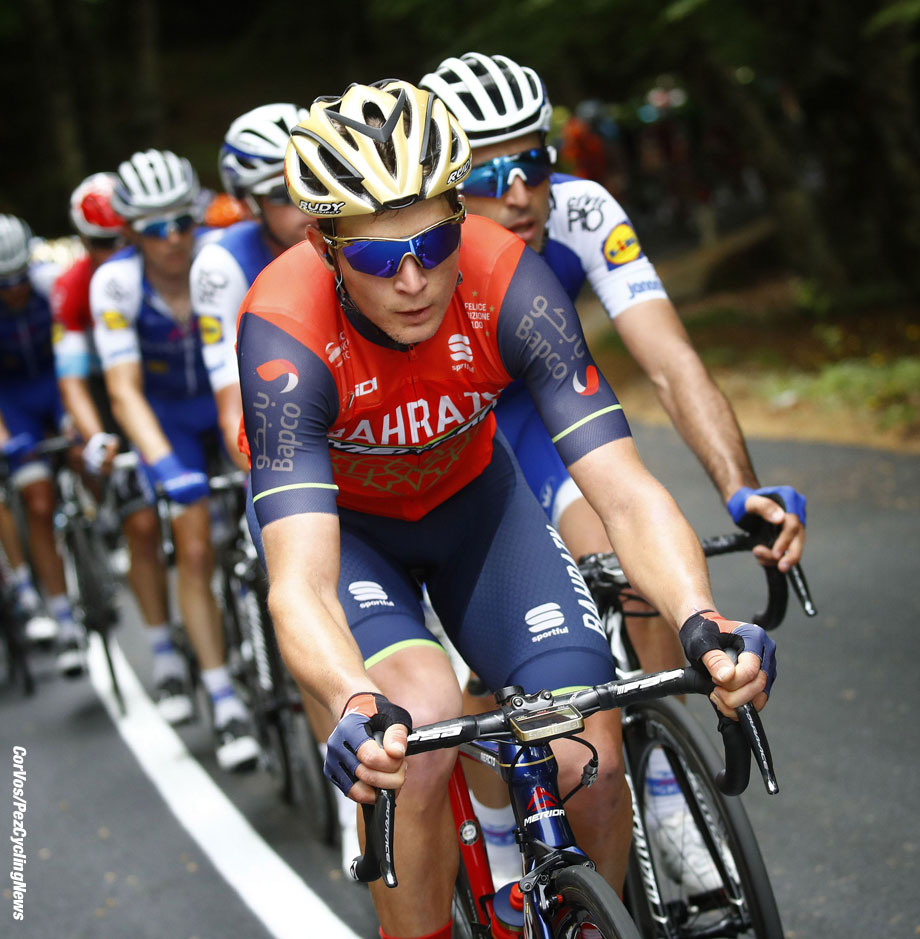 The Garibaldi road book, essential reading for all participants in the Giro d’Italia, made clear that today’s stage would include a circuit through the dusty streets of Messina to be completed twice, but as the riders approached the first passage of the finish line the sound of the bell signalling the beginning of the last lap was drowned out by the excited crowd and Bahrain Merida’s Luka Pibernik broke away before raising his arms in victory, comically unaware that six kilometers remained.

Surprised not to be greeted by a throng of photographers, Nibali’s team-mate slowly realized that he had made an embarrassing mistake and the rest of the peloton rapidly rushed past the red-faced Slovene.

When the final push for the line did come, Greipel found himself boxed in and unable to burst forward, while Roberto Ferrari could not capitalize on the good work of his UAE Team Emirates formation. Sam Bennett of Ireland, perfectly set up by his Bora-Hansgrohe team-mates, looked to have the upper hand but a late surge from Gaviria made it two for Colombia, while Italy’s Jakubo Mareczo of the small Wilier Triestina formation came a remarkable second. 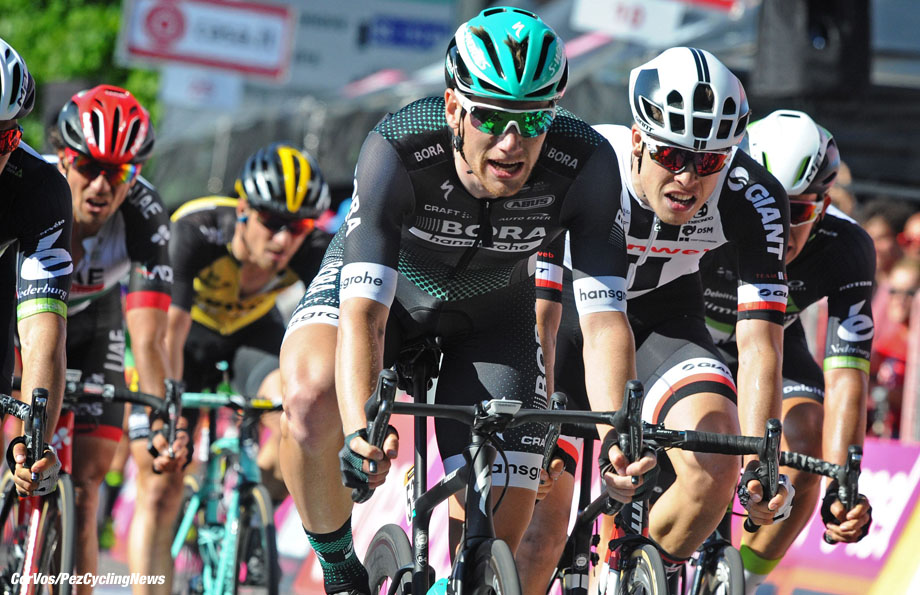 The young Luxemburger Bob Jungels held on to the Maglia Rosa after an uneventful day in the saddle, while Gaviria grabbed hold of the cyclamen points jersey. The blue mountains jersey remained on the shoulders of Slovenia’s Jan Polanc, the hero of Mount Etna.

Nibali would have loved to ride into his native city in pink, of course, but for “lo Squalo” it was still good to be back. What is more, the strategist inside him will be only too pleased to let the young Jungels and his Quick Step team soak up the pressure this early in the Giro, particularly given that his own Bahrain-Merida formation has been weakened by the expulsion of Spaniard Javier Moreno for violent behavior on Stage 4.

This evening, the riders of the Giro d’Italia will cross the Strait of Messina and make for mainland Italy, where another flat stage—this time between Reggio Calabria and Terme Luigiane — awaits them tomorrow. The battle for the Maglia Rosa is expected to truly begin at the weekend when the race reaches the Apennines and a monstrous ascent known as the Blockhaus. 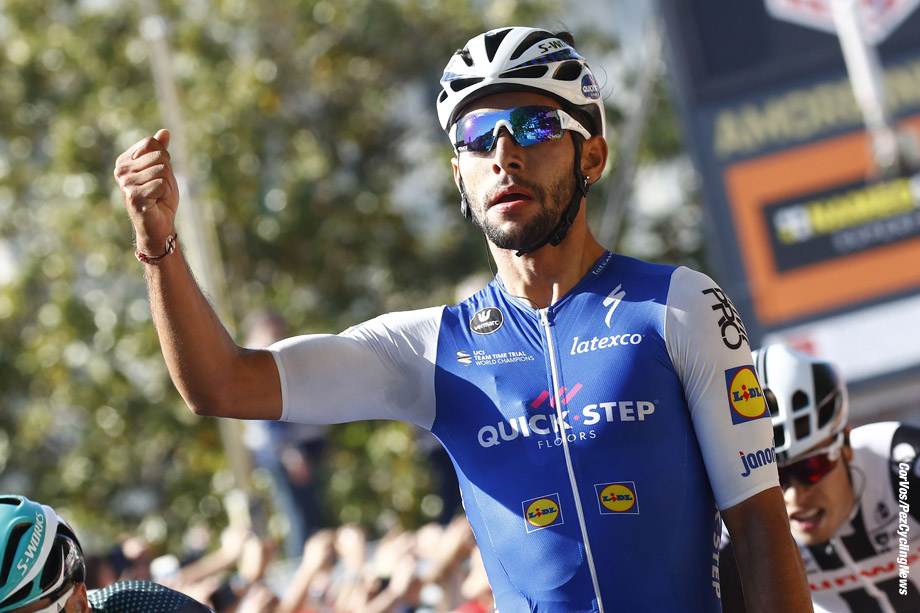 Stage winner Fernando Gaviria (Quick-Step Floors): “I’m happy with these two victories. My legs responded as I want. This win isn’t only mine, it belongs to all the people who support me, to my family who are here… The team worked to perfection. We’ve won in the best way. We’re racing with two goals: stage wins and GC. We’re doing well on both these days.” 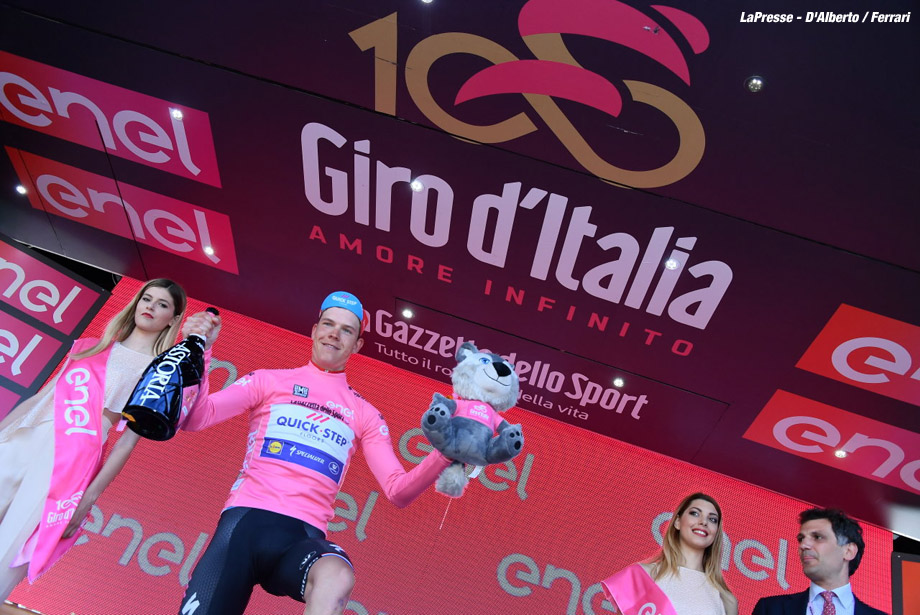 The race leader Bob Jungels (Quick-Step Floors): “It went perfectly today. It was dangerous in a crazy finale. To be honest, I was super happy that Fernando took the victory. But it cost me a lot of nerves here in Messina. It was amazing to see so many people on the road sides for Vincenzo Nibali. They were very excited. I will try to keep the Maglia Rosa at least until Sunday. It’ll be an important day for the climbers at the Blockhaus.”

# Keep tuned to PEZ for everything Giro d’Italia and Giro up-dates in EUROTRASH Thursday with rider reactions and video. #