Giro Stage Report: On paper, today’s stage 6 from Reggio Calabria to Terme Luigiane was hand-made for a breakaway, though few would have predicted an exact winner. Stand up Sylvain Dillier of BMC, who arrived to the line in gutsy break of three riders on a day where the GC contenders and stage favorites played only a cameo role. 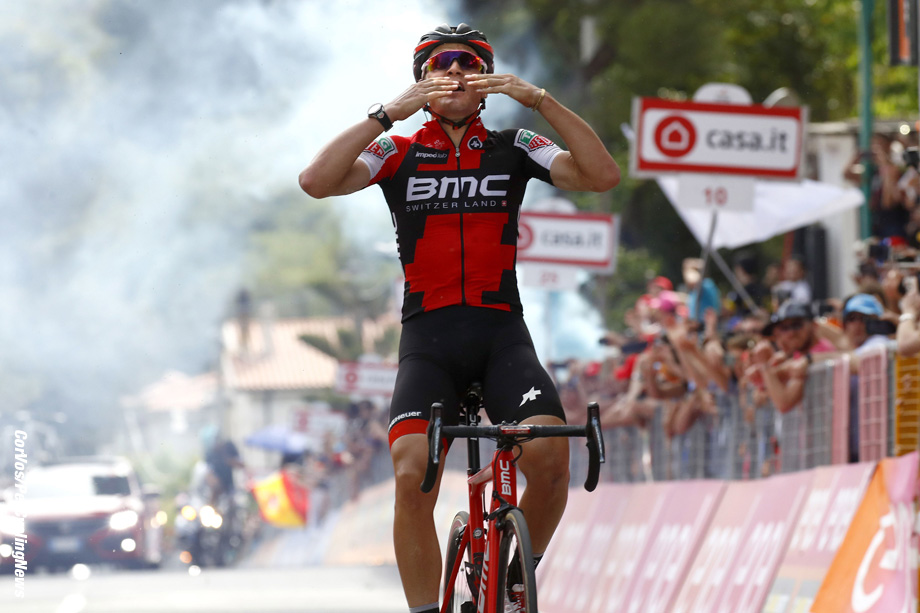 The sixth stage followed the Calabrian coast for much of the 217km stage, only briefly diverting inland to take in the first two early climbs. A five man grouped formed shortly before the first climb which came after 38km. The make-up of this quintet was not to be sniffed at – Pedersen & Stuyven (Trek-Segafredo), stage 1 winner Postlberger (Bora-Hansgrohe), Dillier (BMC) and token Italian Andreetta (Bardiani-CSF). Notably, this was the first breakaway of the race without a Gazprom-RusVelo rider present. 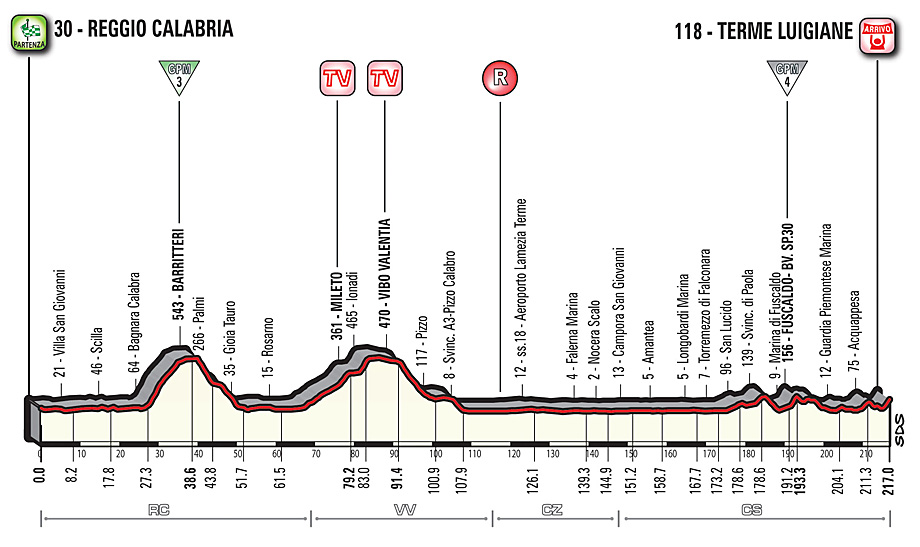 This group didn’t hang around and with favorable winds, were able to build a five minute gap in the opening 30 kilometers of racing. This gap would extend to over eight minutes before any reaction came from the main peloton.

Team classification leaders, Cannondale, were the first team to crack the whip as the race dipped inside the final 100 kilometers. With two Trek-Segafredo riders present in the breakaway, they were determined to defend their lead in that competition. This insurgence of pace caused the group to line-out and brought the gap down to 5:30. 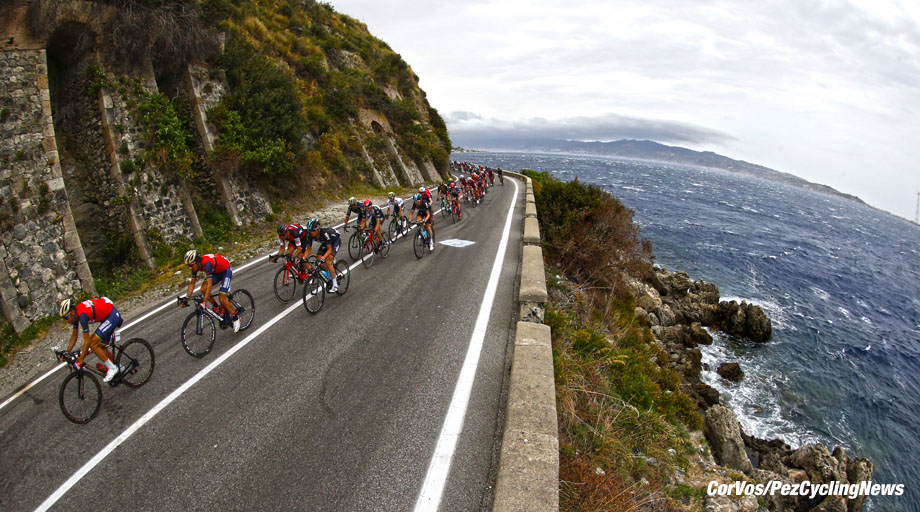 As the race passed the half-way point the leaders had accumulated an average speed of 39kmph, a testament to the difficulty of the early parcours.

The punchy finish was thaught too difficult for the sprinters and murmurs of a bunch gallop were dismissed as we saw Andre Greipel coming back for bottles, the big German on team duty today. 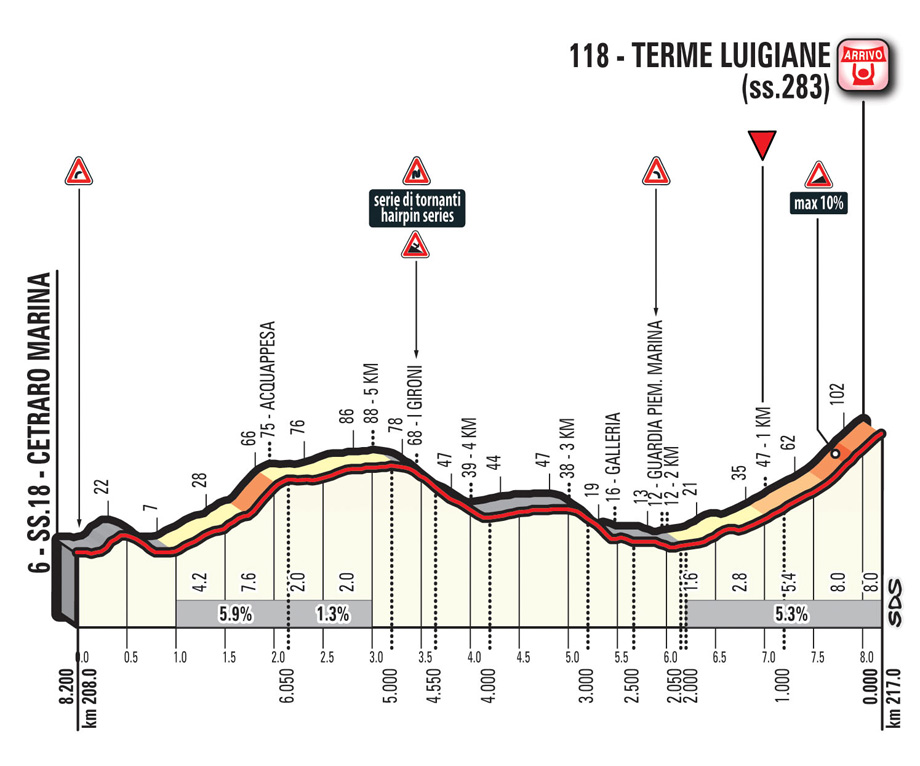 Despite the chase of the Cannondale-Drapac led peloton, the strength of the breakaway was shown as the gap moved back out to 6 minutes as they turned into a headwind.

There was very little in the way of a truce as the race passed the feed zone with Cannondale-Drapac maintaining a high tempo. Willier were also contributing to the chase at this point, sensing the possibility of a win for the darling of Italian cycling – Filippo Pozzato. 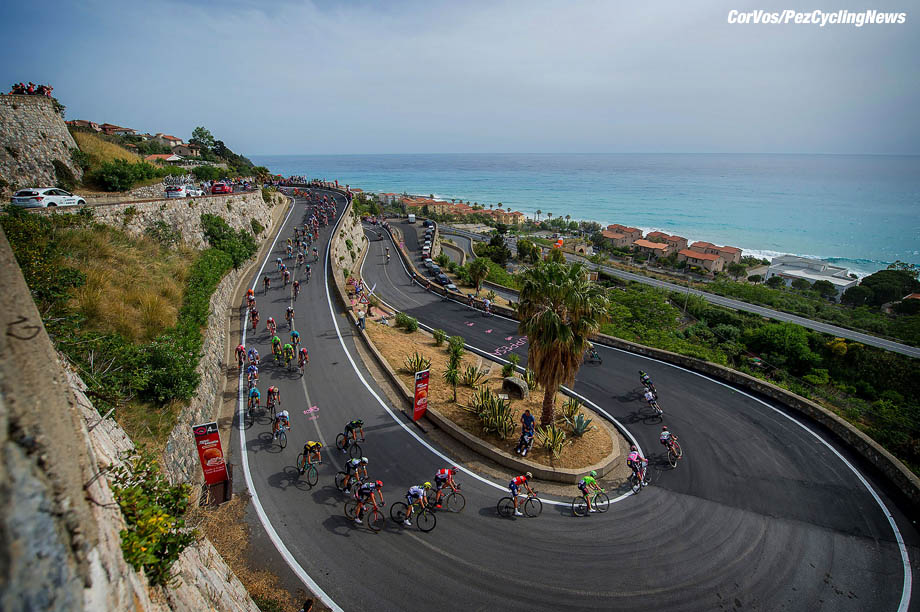 As the peloton chipped away at the five leaders, race leader Bob Jungels and his Quick-Step team were sitting pretty behind the Cannondale and Willier trains. Dimension Data also sensed danger in the breakaway and put a couple of riders towards the front for their puncheur Natahn Haas.

Quick-Step took up the pace at the front with 25km remaining, with the race exploding as the heads of state came to the fore. As the break crested the top of the final cat 4 climb the gap still held at 3 minutes.

Yesterday’s hero Fernando Gaviria (Quick-Step Floors), who won the sprint in Messina just 24 hours previously put in a big turn at the front in the final 20km as the bunch desperately tried to claw back the five leaders. 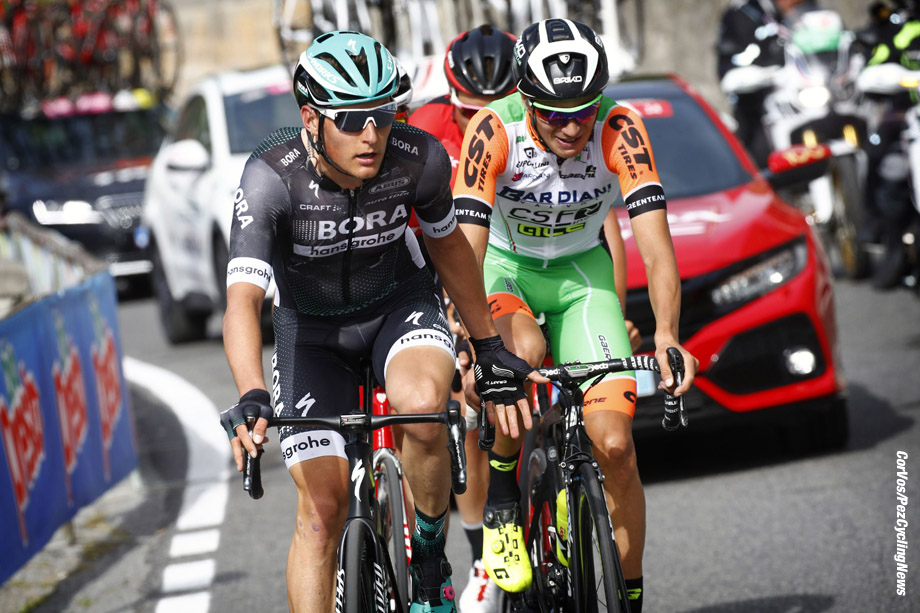 Meanwhile in the breakaway Trek held all the cards with two riders represented in the form of Stuyven and Pedersen. As the break came onto the penultimate climb the race faces appeared as the efforts of the 208km escape started to show. Sensing his days were numbered in the breakaway, Pedersen put in a huge turn on the front, sacrificing himself for teammate Stuyven.

Stuyven, not fancying his chances in an uphill sprint, sprung out early with only Postlberger and Dillier able to follow with 5km to the line.

The bunch, now led by Movistar squeezed the gap down to 1:30 but the result was always going to come from this leading trio. It was clear that the highly anticipated GC battle would have to wait. 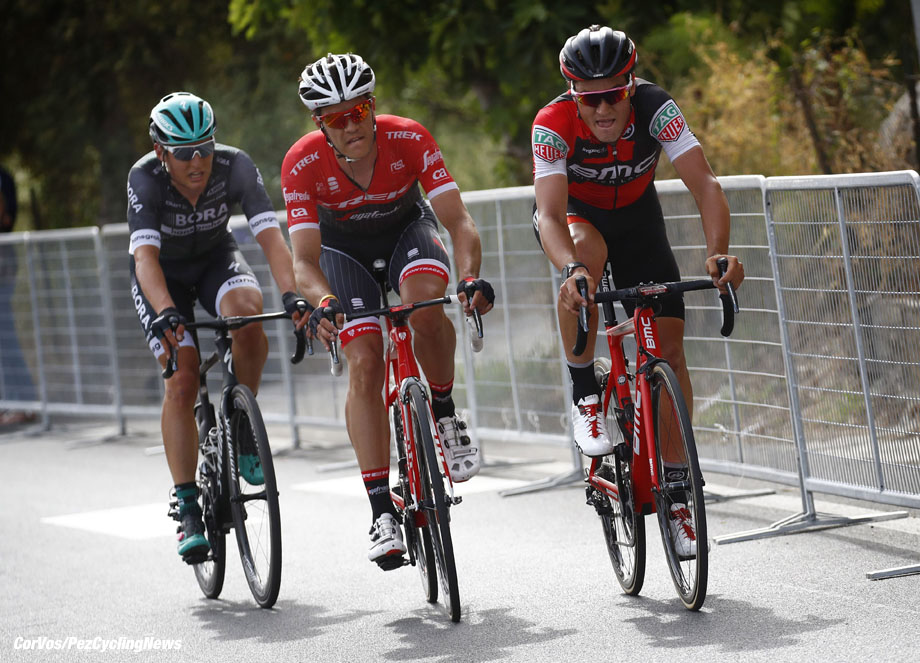 With under 2 kilometers to ride the leaders sensed the move would stick and began looking at each other, with Postlberger on the back. Spectators could have been forgiven for mistaking the race for a slow bike race and they crawled up the final meters, no rider wanting to commit to an early attack.

As they reached the fifth hour of racing, Postlberger finally took up the reigns at the front. Then with 200 meters to the line, Dillier hit out for what would be his race winning move and the fourth win of his career. As he lifted his hands in victory, a look of disbelief swept his face as he wrote his name into cycling history as a Giro d’Italia stage winner. 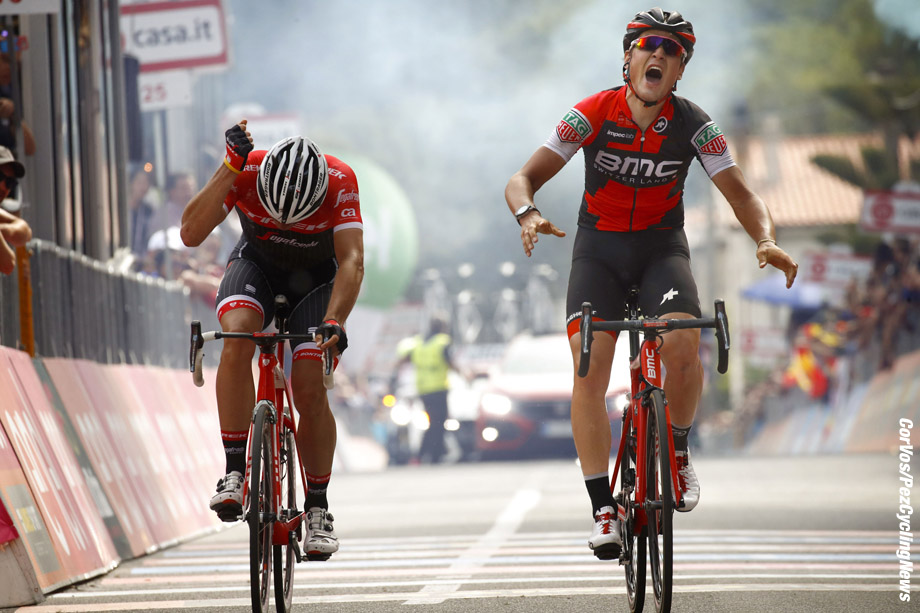 Stage 6 winner Silvan Dillier (BMC): “I don’t know how I managed to beat Stuyven who is an excellent sprinter, but when it’s a hill top finish I have power and I can push a big gear. I just tried to believe in myself and find some more energy to finish it. This is the biggest victory for me so far.” 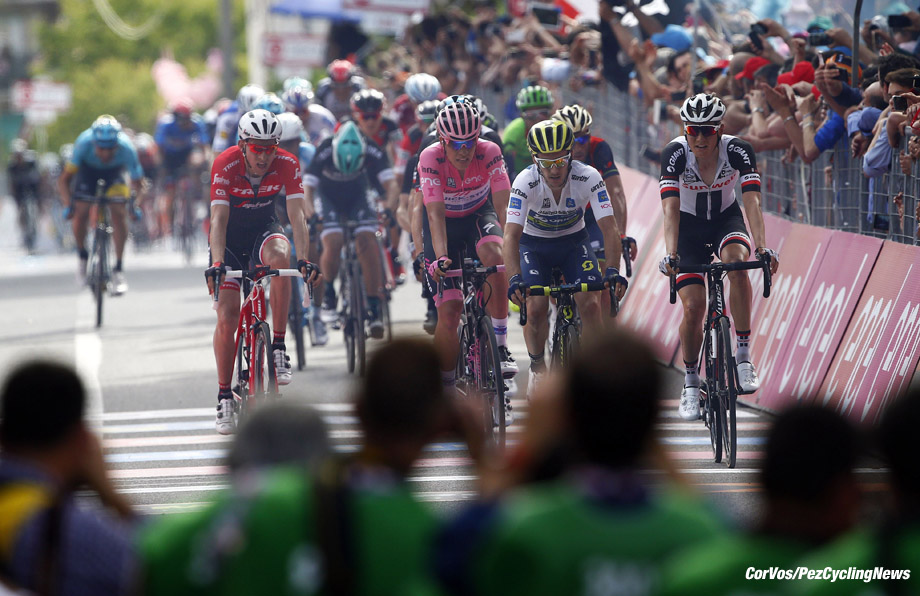 Keep it PEZ for everything Giro.