Giro Stage Report: Caleb Ewan finally shook off the shackles of the podium to win his first ever Giro d’Italia stage in a wonderful three up sprint. The Australian fast-man was up against the new order of sprinters; Sam Bennett and Fernando Gaviria and it was a close decision on the finish line in Alberobello. 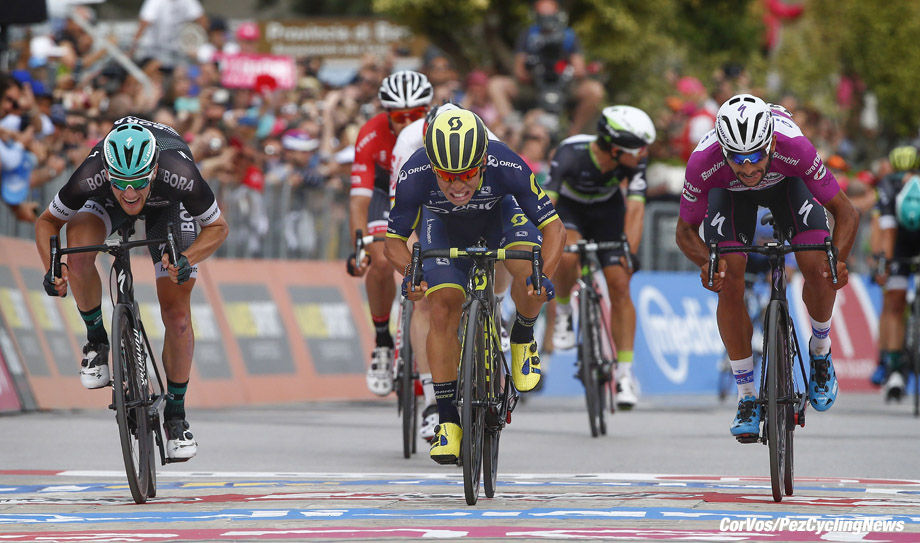 It was a flat and very, very, very long stage across the sole of the Italian boot. A three man break, later to be two man, launched off the front but with few opportunities left for the sprinters it was never going to be a day for the break. Instead, the Quick-Step Floors team held the time gap in check before dragging them back for a rolling and technical finalé. Inside the final 5km it looked like Sam Bennett would finally grab his stage win, but despite his team’s hard work it was Caleb Ewan who was the quickest as he managed to just hang on for long enough to hold off Bennett and Gaviria.

The drama will ramp up at the Giro tomorrow and over the weekend as the GC boys get to take centre stage again.

Route
Despite some impressive individual performances so far, the 100th Giro is yet to really kick into life, it was unlikely to happen on this stage across the arch of the Italian boot. We started in the town of Castrovillari at 346m in the shadow of the Pollino massif, but this isn’t a day for the climbers as we almost immediately descend to the coast for the majority of the day’s racing to Alberobello. The next 118km were spent powering along the sheltered coastline before the riders turn inland for a rolling, but much less testing than yesterday, final 86km of the stage. It’s yet another long day on the route, 224km is the second longest of the race, they will take on 234km in six days time. The distance and finalé would sap the explosiveness from the sprinters, but with no opportunity again until the stage next Thursday, they didn’t want to give this one to a breakaway. 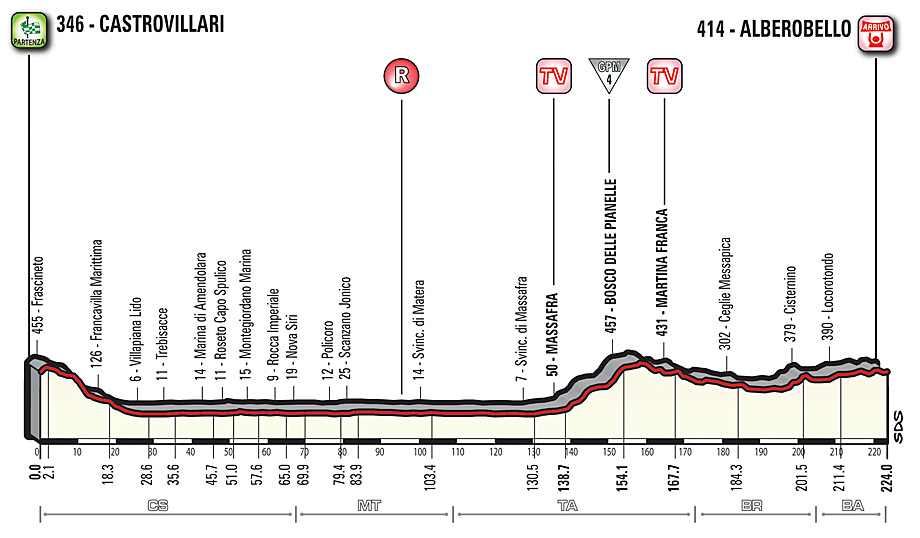 So far, only André Greipel and Fernando Gaviria have anything to brag about when they get thrown into the gruppetto on the impossibly hard final week. Caleb Ewan and Sam Bennett have come close, but today it would all depended on how fresh they go into the twisty and tiring final 5km. 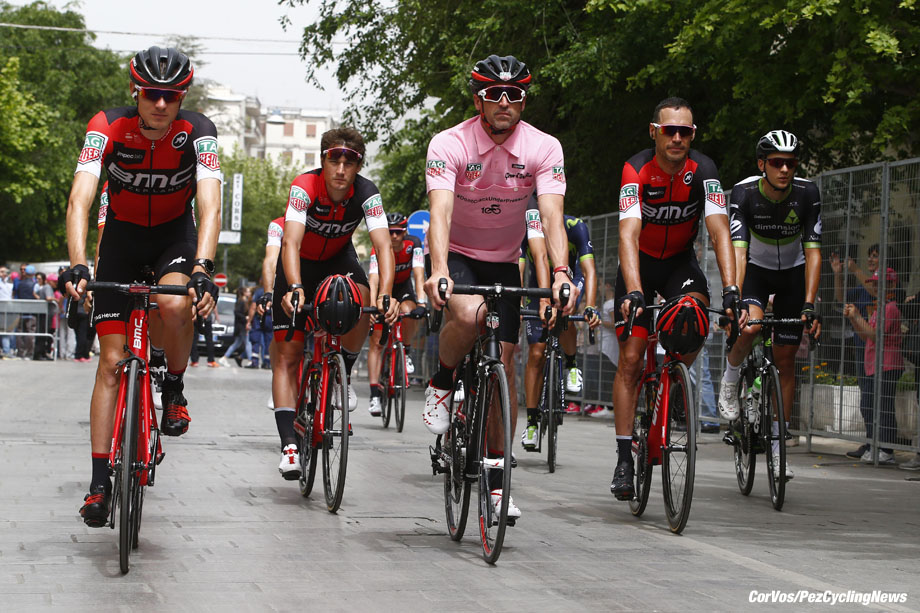 Long and Winding Road
The long day in the saddle began, as per usual, with a very early breakaway clipping off the front. The three who would be spending a long time in each other’s company were Giuseppe Fonzi (Willier Triestina), Simone Ponzi (CCC Sprandi Polkowice) and Dmitriy Kozontchuk (Gazprom-RusVelo). With 200km to go, the brave trio had a three minute advantage over a, largely, disinterested peloton. 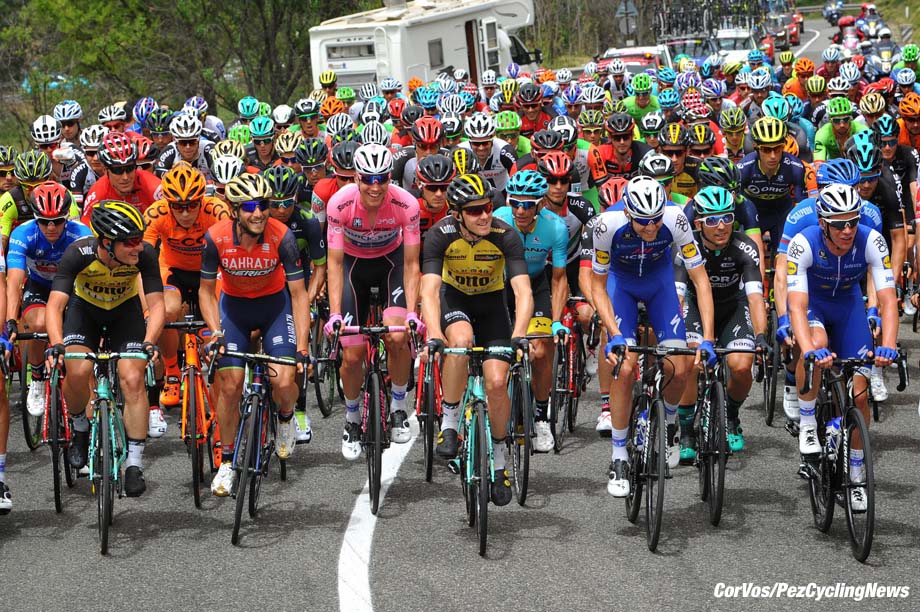 Unfortunately, the grand day out was ended early for Ponzi after a mechanical sent him back to the peloton, leaving just two courageous (stupid?) riders out front for the rest of the stage. The gap grew out to 4.30 but, nothing happened for 100+km. I counted the number of books on my shelf, 25, and I ate some biscuits. I may have fallen asleep.

Quick-Step Floors had the in-form sprinter, Fernando Gaviria, and the pink jersey with Bob Jungels, so they were sent forward to ramp up the pace and bring the duo back to heel. The once four minute plus gap was sawn down to under two minutes with 40km left to ride. However, they didn’t want to end the break’s day quite yet and the pace was knocked back. 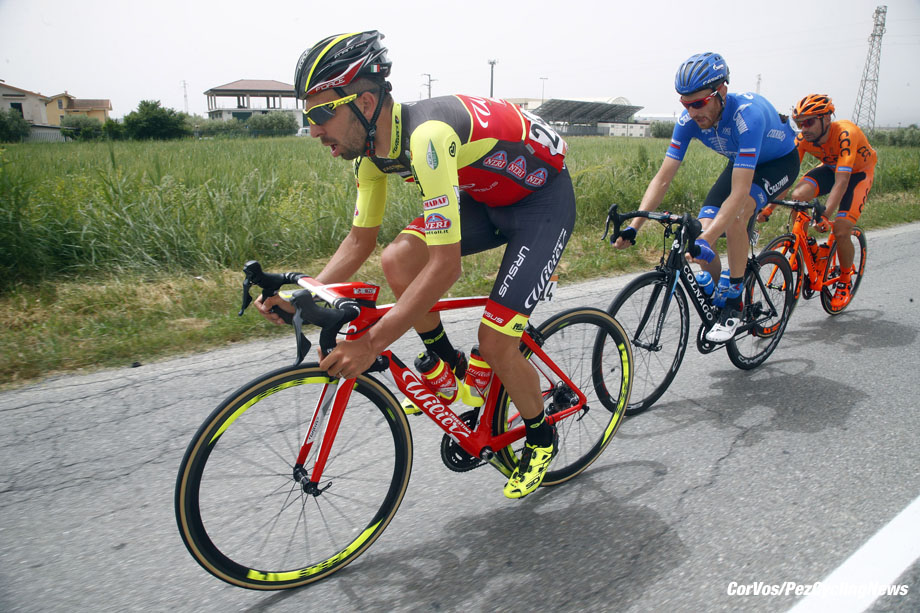 The Finalé
The Quick-Step Floors pace setting had done all the damage and with 20km left to ride they ended the hopes of the breakaway and it was all back together. After a day of nothing happening, the sprint teams were now within sniffing distance of a win and the pace continued to rise. Bora-Hansgrohe were thrown forwards in support of Sam Bennett but the ever present Quick-Step Floor’s jerseys began to fall away as they entered the rolling finalé.

The pace continued to ramp up as riders took the opportunity to sit up and rest for the upcoming tough weekend. At the business end though it was a continuous procession of the top sprint teams as they raced towards the narrow streets in the final 5km.

The last 5km was the time for the status quo to be challenged and Kristijan Koren (Cannondale-Drapac) went clear on a short rise. Team Sky were happy to contribute to the catch though and they hauled back the escapee to set up a sprint finish in the city.

With 2km left to ride Orica-Scott were monopolizing the front of the peloton for their sprinter Caleb Ewan. Bora-Hansgrohe and Dimension Data were trying to challenge for the lead but the narrow roads were pushing all the non-sprinters backwards. 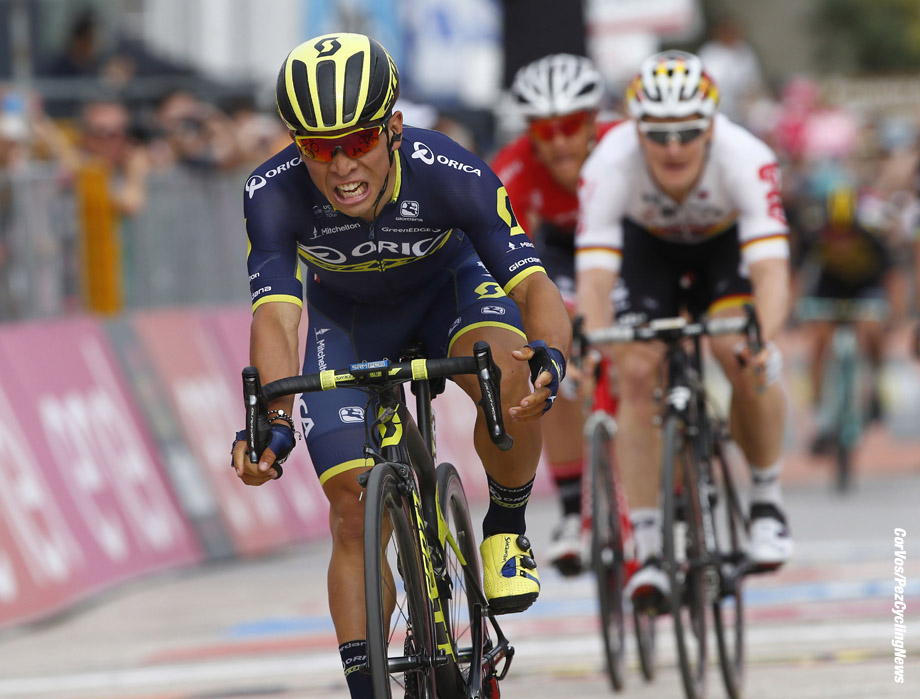 With 1km left, Bora-Hansgrohe were the new leaders and Sam Bennett was perfectly set to take the stage win, but his acceleration off Rudi Selig’s back wheel was sluggish and Caleb Ewan was able to take the initiative and burst clear. It was between these two, but Gaviria was still around and he came flying on a wide angle to create a brilliant three man finish. The line came just soon enough for the Australian though and he took the win ahead of a diving Gaviria, with Irishman Bennett in another third place. André Greipel (Lotto Soudal) came home in a relatively distant fourth. It wasn’t a classic, or even good a day of racing but the last 3km were fantastic.

Stage winner Caleb Ewan (Orica-Scott): “It feels so good after the first few disappointments I’ve had. I don’t think I’ve felt so good before. It was a bit crazy at the end. We got caught too far back at about three kilometers to go. But we found each other. We didn’t panic. The boys did a perfect job.”

Overall leader Bob Jungels (Quick-Step Floors): “It was a bit crazy today but I had to ride at the front in the last ten kilometers to come home safe. It’s not a disappointment for our team to not win with Fernando Gaviria today, because he did a great sprint and the team helped him. It’s no shame to lose against Caleb Ewan who is very fast.” 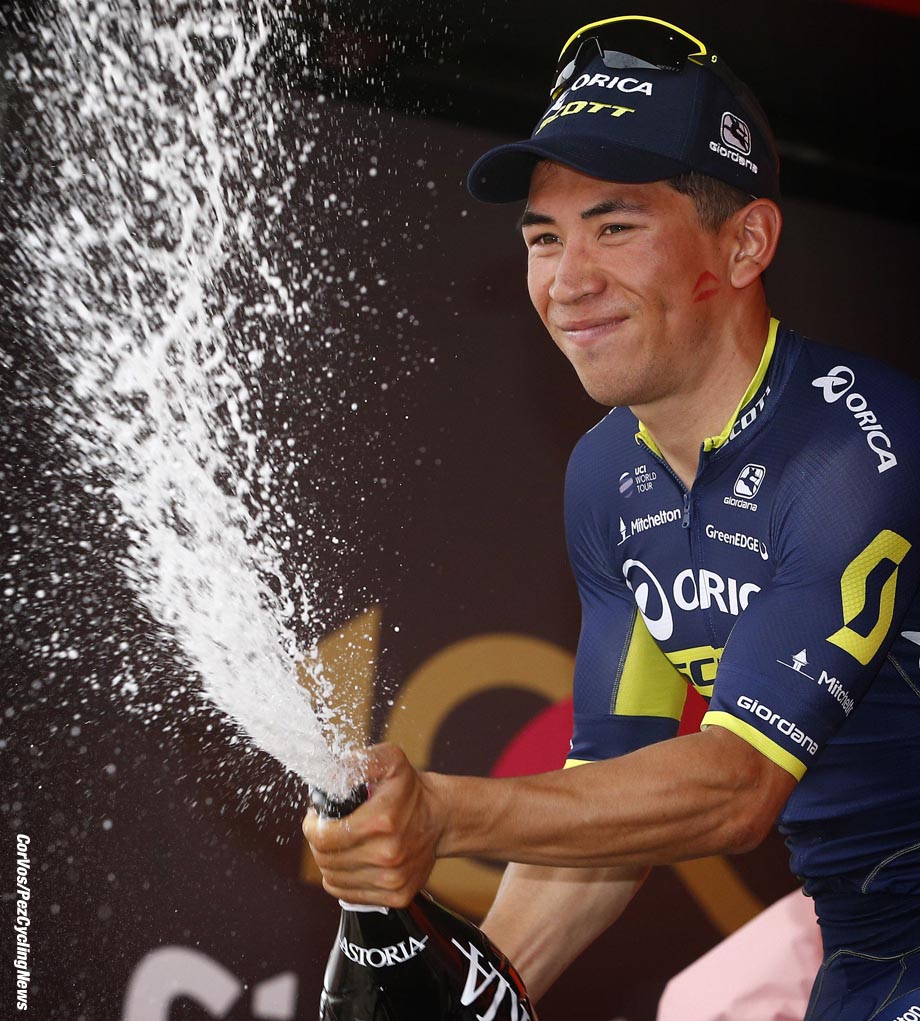 Keep it PEZ for an action packed Giro weekend.