Giro Race Report: If Mario Cipollini called the Giro “monotonous” earlier in the week he was in for a pleasant surprise today in what proved to be the first real test for the GC contenders. With Thomas, Landa and Yates conceding several minutes due to crashes, today had all the drama of an Italian opera – breakaways, crashes and a final crescendo which saw pre-race favorite Nairo Quintana take flight from the other leaders to claim the stage victory and the pink jersey. 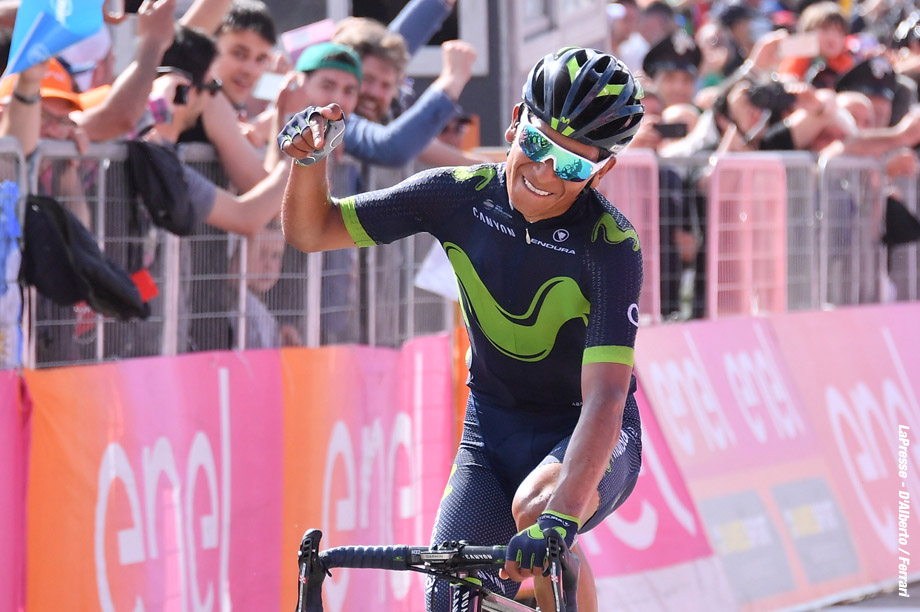 It took until stage 9, but today was the day when the GC battle would really commence with few winners and many losers. If until now we had only seen “friendly fire” between the big contenders, today’s 149km stage with its 13.6km finishing climb to Blockhaus was sure to change all that. 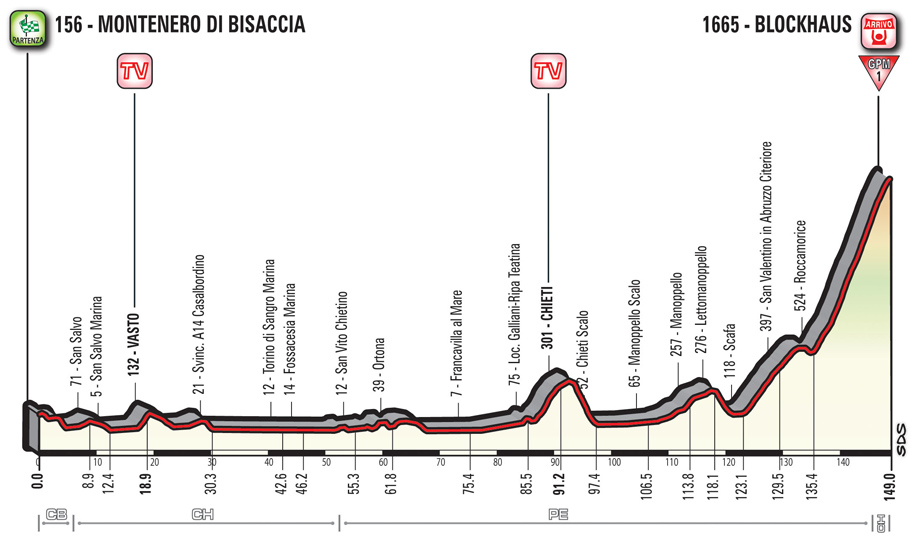 What the stage lacked in length it made up for in difficulty with the final climb averaging 9% for over 10kms. The lead of Bob Jungels was expected to be challenged with the terrain favoring the pure climbers. Italian hopes for a result in this Giro lay firmly in the hands of Vincenzo “the shark” Nibali and his compatriot Domenico Pozzovivo or “Dr.Pozzovivo” as he is affectionately known in the peloton for his high level of education. 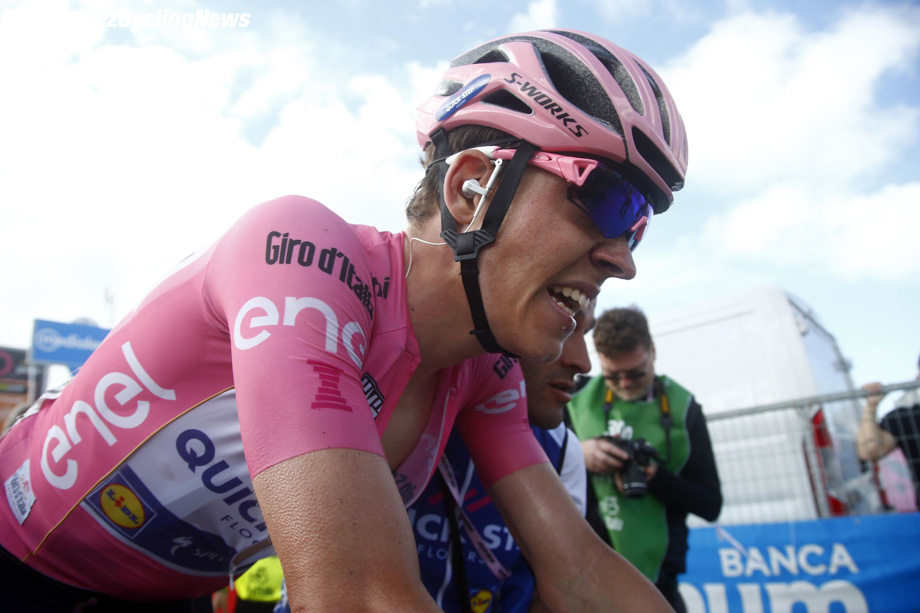 Not content with his third place on yesterday’s stage, Luis Leon Sanchez was marking his presence at the front of the escape throughout the day, barking orders at his breakaway companions and ensuring cooperation between the riders. They were eventually joined by a trio of riders including Pierre Rolland (Cannondale-Drapac) as the break swelled to twelve riders. With the group covering a whopping 49.5 kilometers in the first hour of racing, a record for this years Giro D´Italia, the peloton kept the gap to the break within four minutes for much of the day.

As the front group splintered on the run-in to the base of the final climb, the last of the breakaway were swallowed up with 22km to ride as the temperatures and the pace began to rise with Movistar in full flight and stringing the bunch out, anticipating a show of climbing prowess from their leader Nairo Quintana. 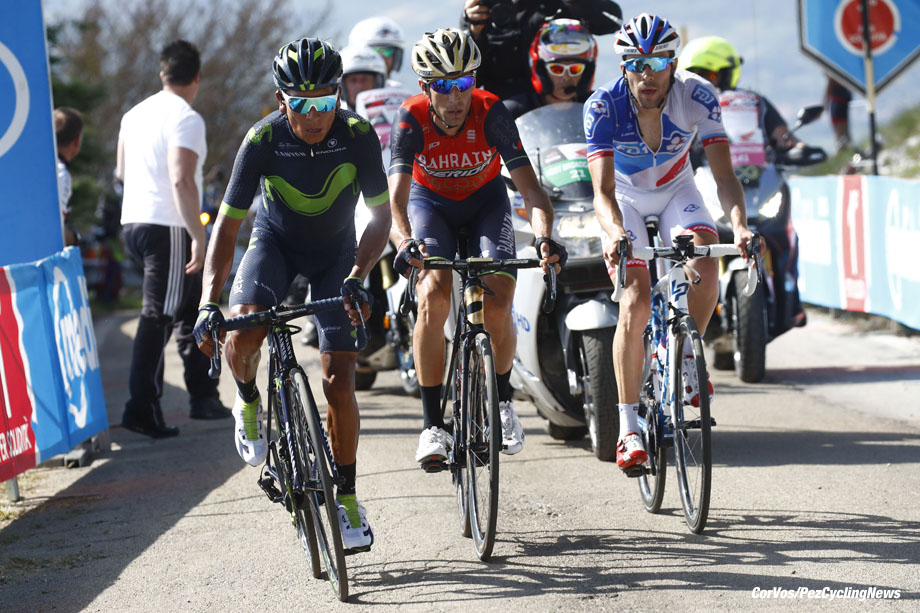 As the bunch jostled for position coming into the final climb, disaster struck for Team Sky when a Sunweb rider collided with a parked race motorbike taking down team leaders’ Geraint Thomas and Mikel Landa. At this point in the race the hounds could already smell blood as the merciless Movistar powered on towards the final climb as Thomas and Landa lay on the ground and left licking their wounds. There were further casualties in the GC shake-up with Adam Yeats, also affected by the crash, losing contact with the leaders on the early slopes. 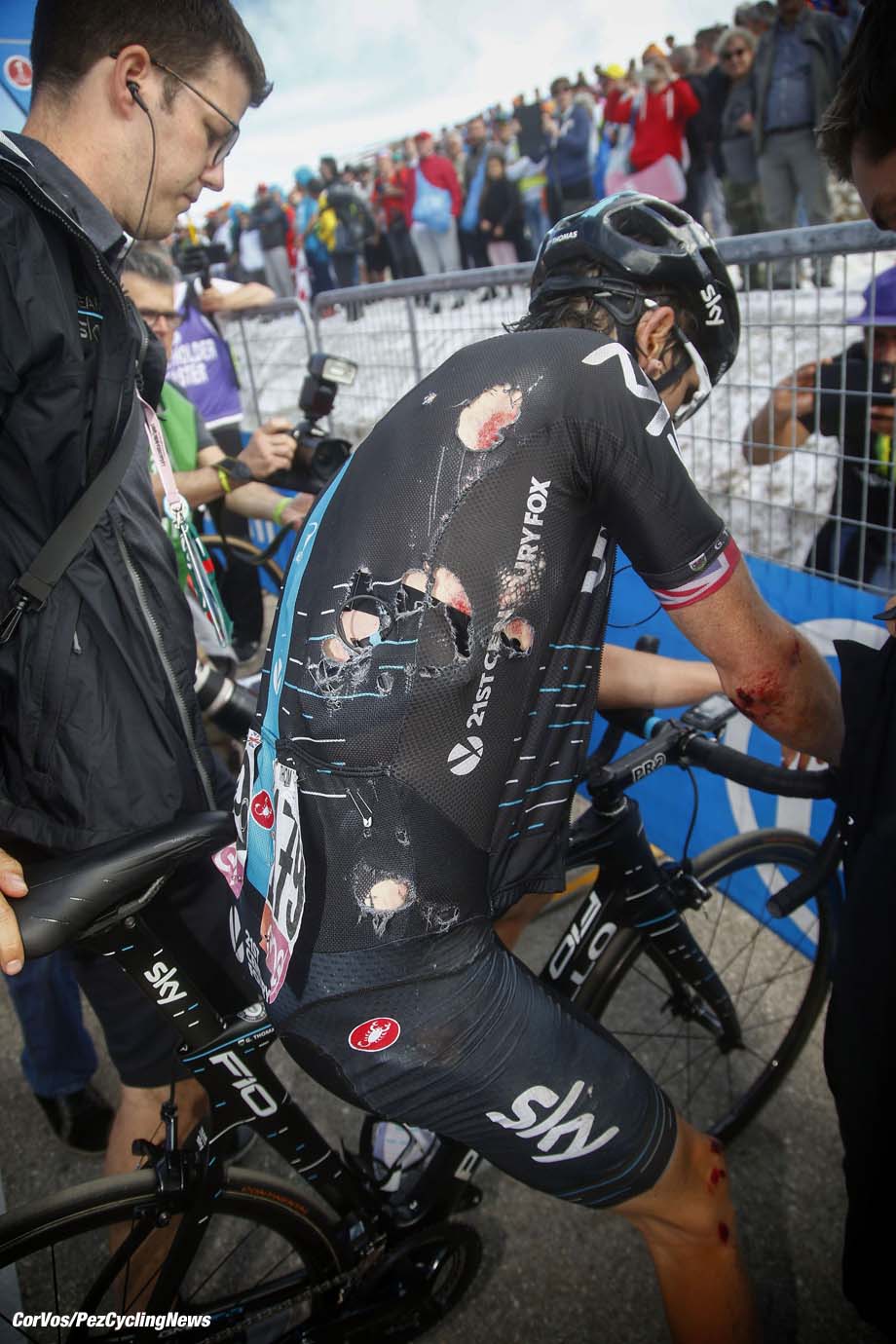 As the climbers came to the fore it became clear that the race lead would change hands, with Bob Jungels losing contact with 9km remaining as Quintana’s teammates Winner Anacona and Andrey Amador reduced the group to 10 select riders. At this point it became clear that the mixture of heat and steep, narrow roads were taking their toll on the riders. Quintana, Pinot and Nibali forged ahead with Mollema, Pozzovivo and Domoulin chasing fifteen-seconds behind. 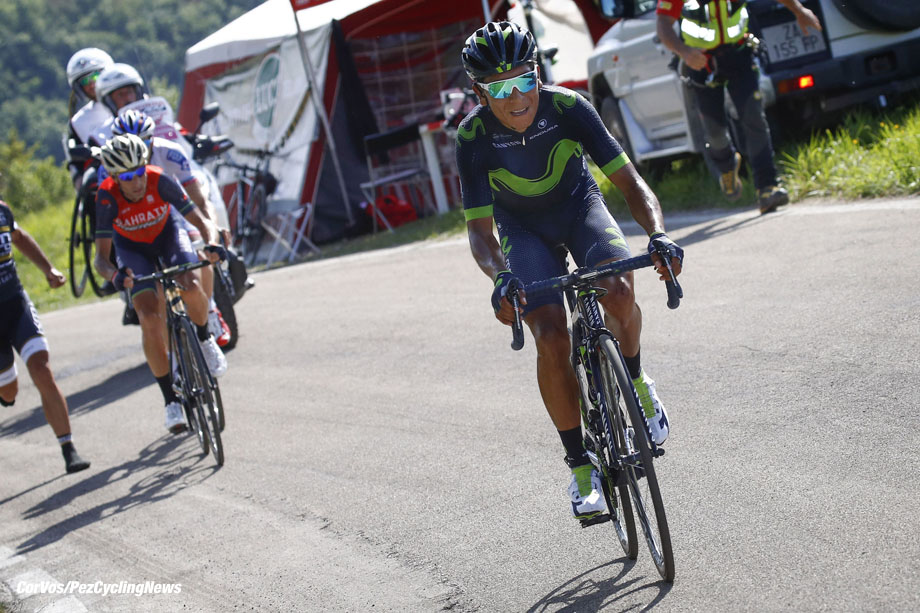 Five kilometers from the line, with his trademark relaxed style and without much sign of suffering, Quintana danced away from Pinot and Nibali with no answer from either rider. The Colombian had time to celebrate as he crossed the line to claim the win and the pink jersey. Meanwhile behind, Dumoulin, with his diesel engine style teamed up with Pinot to round-out the podium. 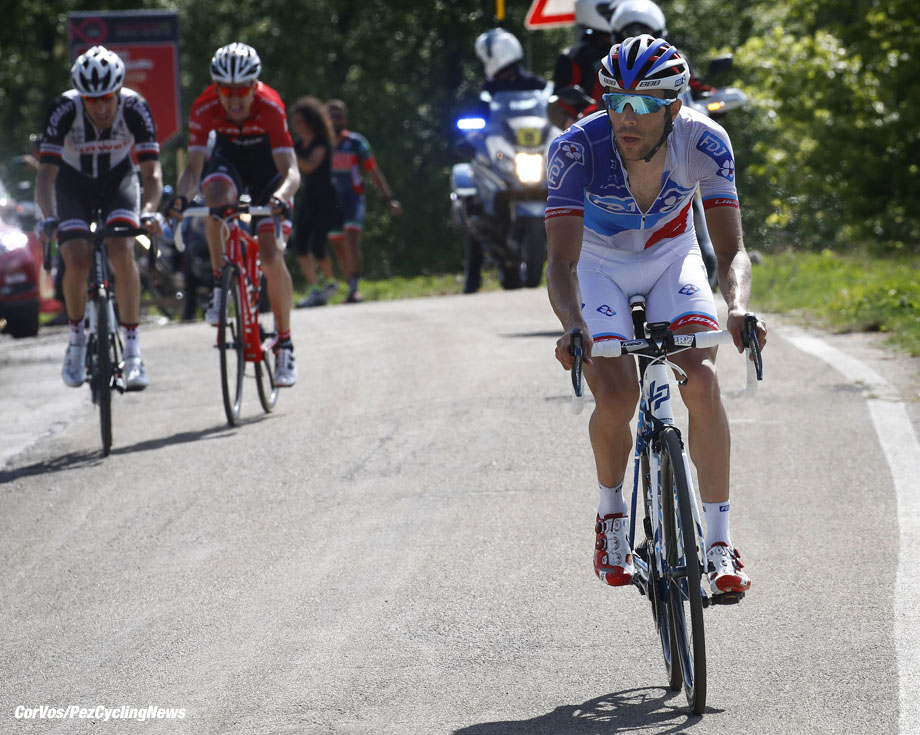 Today has left the race open to several interesting scenarios- how will Sky respond? Can Quintana defend the jersey for two weeks? With Tuesday’s time-trial will we see the pink jersey change hands? One thing is certain – the Giro has well and truly begun and the fight for the GC has become very interesting – though Mario Cipollini may think otherwise. 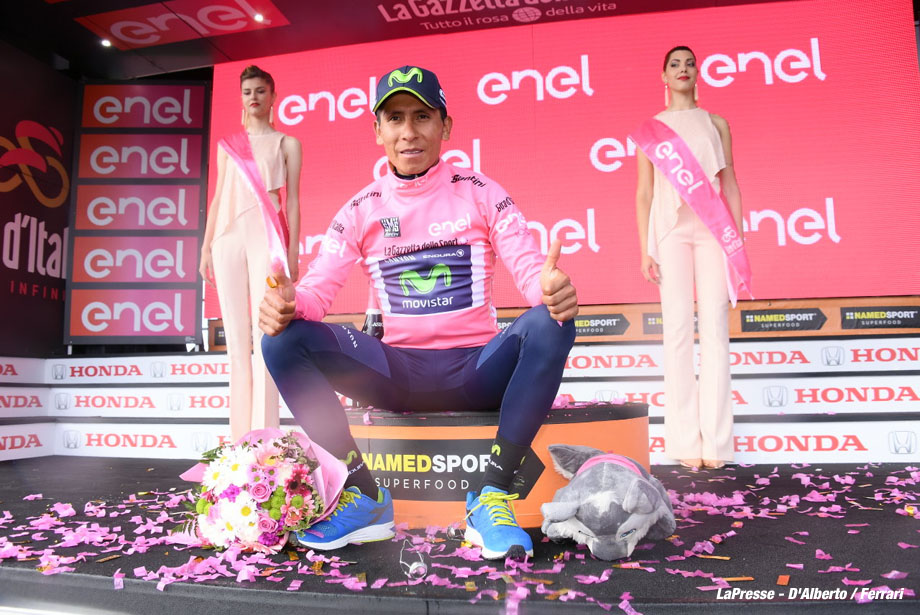 Stage winner and overall leader, Nairo Quintana (Movistar): “On the finish line, I showed that I’m happy with my legs and the legs of my team-mates. The whole team was strong and I was strong. I’m happy with this victory. There’s still a long way to go in the Giro. We’ll get to know in the coming days if the 30-second lead I have over Tom Dumoulin is much or little, but I feel good, that’s the most important for now.”

Giro round-up in EUROTRASH Monday and don’t forget Ale is ‘Roadside’ and you can see his first diary HERE.