Race Report: Chris Froome saved his Giro d’Italia campaign with an unexpected triumph at the summit of the terrible Monte Zoncolan, while his Maglia Rosa-clad compatriot Simon Yates once again impressed, finishing second. The real winner of the day, however, may well prove to be Dutchman Tom Dumoulin, the defending champion, who kept his cool on the steep slopes and limited his losses to 37 seconds. 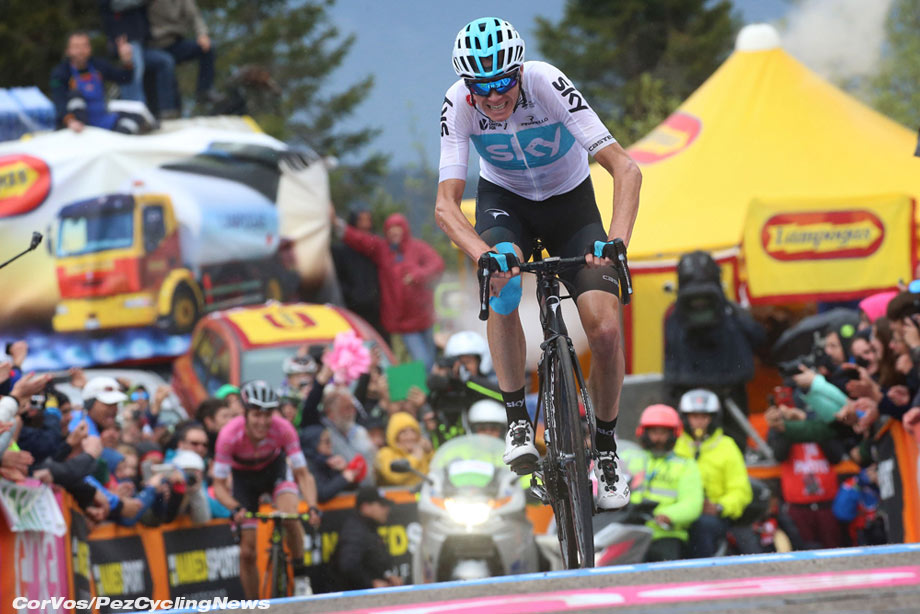 “Zoncolan”, much like “Ventoux” or “Angliru”, is a name that strikes fear in the heart of any cyclist. It evokes a climb so cruel and damningly difficult that the Italians call it “la Porta dell’Inferno”. Ten kilometers long, with an average gradient of 12%, sustained sections at 20% and an altitude gain of 1,200 meters, it feels every bit like a purgatory. To put things into terrifying perspective, ascending its searing slopes, laid bare by the race director’s decision to fell the trees lining the road for the purpose of clearing the view for the helicopter’s camera, is akin to tackling eight successive Murs de Huy, twelve Caubergs or sixteen Koppenbergs. It is a pass that even Pantani found unpalatable. “Dante had it all wrong”, L’Équipe’s columnist extraordinaire Antoine Blondin once quipped, “the way to Hell is up!” 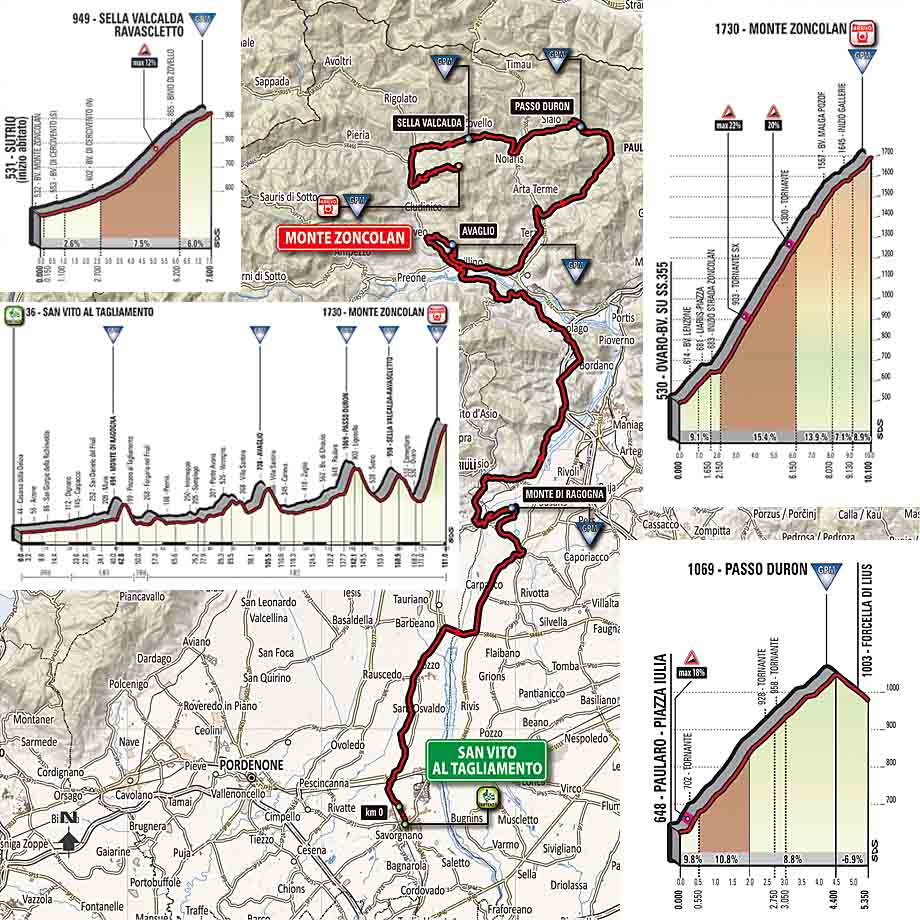 The way to the foot of Mount Zoncolan on Stage 14 of the Giro d’Italia, which departed from the medieval town of San Vito Al Tagliamento, hardly looked like a picnic either: 186 kilometers of mountainous road, with the Monte di Ragogna, Avaglio, Duron, and Sella Valcalda passes something significantly more than mere appetizers before the main dish. On a day like this, the Carnic Alps may as well be renamed the ‘Carnivorous Alps’. 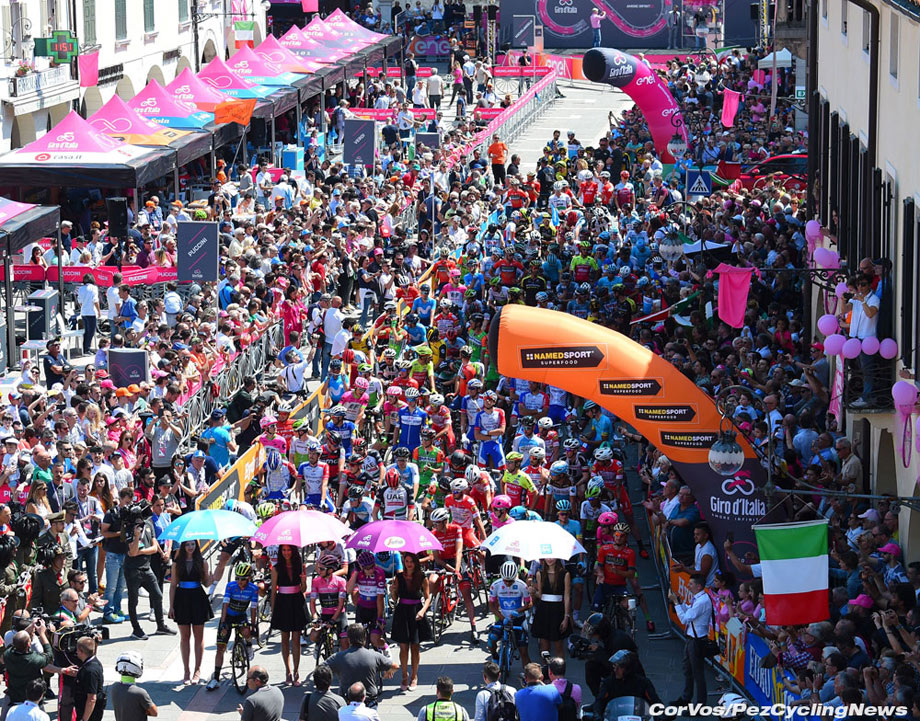 Race leader Simon Yates found himself in a paradoxical situation at the start of the stage. Ordinarily, a man wearing the fabled Maglia Rosa seeks to defend his advantage in order to be crowned champion at the conclusion of the three week Corsa Rosa. ‘The Bruiser from Bury’, however, would need to go on the attack, since the rival closest to him in the General Classification, Dutchman Tom Dumoulin, the one rider to (nearly) hang on to his wheel over the cobbles of Osimo, can count on next Tuesday’s time trial, an exercise in which he is champion of the world, to punish Yates and grab the reins over the 34 kilometers separating Trento from Rovereto. 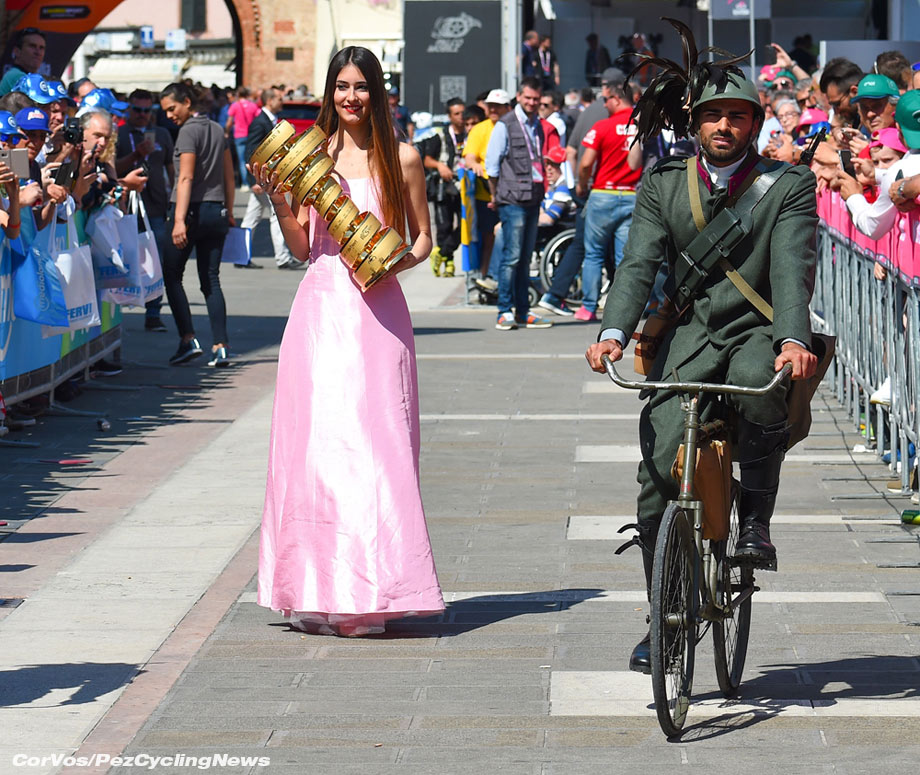 Exactly how much time ‘the Butterfly of Maastricht’ will take out of the young Briton is difficult to predict, but the ‘two minute theory’ has made the rounds in the Sala Stampa of late, albeit amidst clamorous protests from optimistic ‘one-minuters’ and cynical ‘three-minuters’ (a brawl even erupted the other day in Gualdo Tadino when a daring pair of ‘four-minuters’ found themselves surrounded by a vindictive posse of ’half-minuters’, evidence, if any was needed, of the passion engendered by the great race; indeed, the correspondent for the Corriere dello Sport, who recently outed himself as an advocate of the extravagant ‘five minute theory’, has been given a bodyguard). At any rate, today’s tough stage presented an ideal opportunity for Adam Yates’s identical twin to go Girardengo on the Batavian giant and extend his lead, which stood at 47 seconds before the day’s first pedal stroke. 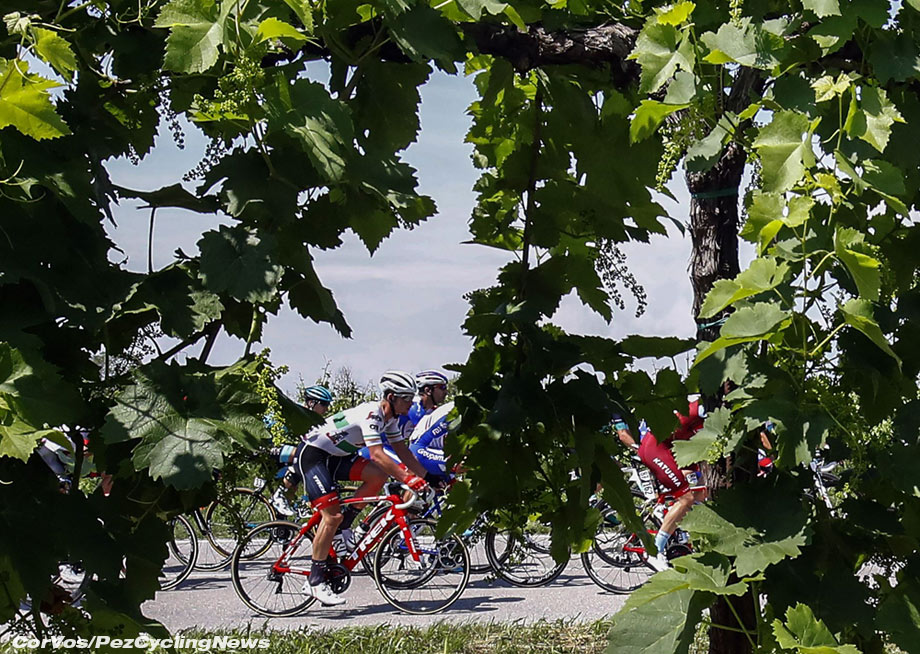 Gavazzi the Great
Animation in the early kilometers came courtesy of a break-away group of seven, featuring three of the Italian wild card formations. Francesco Gavazzi (Androni-Giocattoli), Valerio Conti (Team Emirates), Jacopo Mosca (Wilier Triestina), Matteo Montaguti (AG2R), champion of Denmark Mads Pedersen and Laurent Didier (both Trek), as well as the former King of the Mountains Enrico Barbin (Bardiani), led the way along the verdant valleys and through the thick forests of the Udine province, under glorious sunshine, their progression punctuated by occasional hot spot sprints.

In the first of these contests, Gavazzi proved the dominant force, racking up points and coins with ease, the well-travelled 33 year-old, whose career achievements include victory in a stage of the Tour of Beijing leading to the Great Wall of China, demonstrating that his appetite for success, exotic or otherwise, remains insatiable.

The advantage of the seven over the peloton, fronted by the entirety of Yates’s Mitchelton-Scott guard, remained stable at 3 to 6 minutes for much of the stage, its evolving extent regularly broadcasted by Radio Corsa.

At the front of the bunch, Yates remained placid and poker-faced beneath his Star Trek-style helmet, flanked by his ever-grinning Colombian lieutenant Esteban ‘Cheshire Cat’ Chavez, while behind them each of the pack’s other heads of state rode surrounded by his respective colour-coded coterie, the titanic Dumoulin surrounded by his black and white Sunweb shoal; the eternally unshaved Thibaut Pinot protected by his bleu blanc rouge Groupama-FDJ formation; and the spindly Chris Froome, amidst the pale Sky pack, coming to terms with his new status as Britain’s second-best cyclist.

In the descent of the Avaglio, just over 70 kilometers from the finish, as the weather took a turn for the worse, the quadruple Tour de France winner rose to the fore with his team-mate Salvatore Puccio to put pressure on the other favorites, but Yates’ men rapidly reasserted their authority after this sudden and fleeting skirmish.

Forza Froome
As it hit the Passo Duron (5.4 kilometers in length, maximum gradient 18%), just under 50 kilometers to the good, which inaugurated a nightmarish trilogy of climbs culminating with the Zoncolan, the leading group found itself whittled down to five members, losing Mosca and Pedersen. Farther behind, the Sunweb and Astana squads took turns controlling the peloton, as Chaves lost ground, leaving Yates exposed. 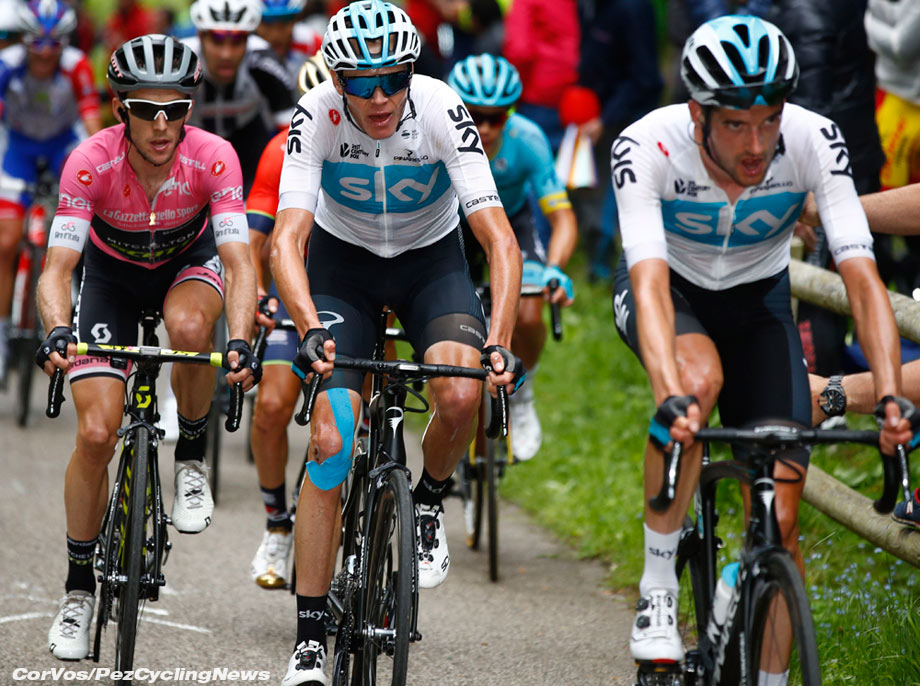 Come the Sella Valcalda (7.6 kilometers long, maximum gradient 12%), the Italian grimpeurs Conti and Barbin accelerated, dropping Gavazzi, Didier and Montaguti without ceremony, while the gap to the chasing pack shrank to a mere minute.

At the foot of the Zoncolan, the riders’ team cars, banned from driving up the narrow, twisting, tifosi-saturated road, had to grind to a halt, their occupants climbing onto motorbikes in what looked like the transition phase of a curious triathlon.

The feisty Barbin tried his best to hold Conti’s wheel but lost contact within hectometres of the beginning of the savage ascent, unable to match the shoulder-swinging Team Emirates rider’s tempo. Spaniard Igor Anton (Dimension Data), conqueror the Zoncolan many moons ago, shot out of the Maglia Rosa group and set off in pursuit of the lone leader, catching and deposing him with seven kilometers remaining, but the peloton soon swallowed both men.

Among the chief contenders, Australia’s Rohan Dennis and New Zealand’s George Bennett were first to falter, losing ground early in the climb. Dumoulin and the champion of Italy Fabio Aru also began to wobble as an increasingly exclusive front group pedalled in slow motion to the summit, braving the extra-terrestrial gradients.

Froome and his loyal domestique Wouter Poels moved to the front, upping the ante, and under the five kilometre gantry only Yates, Italy’s Domenico Pozzovivo, Spain’s Miguel Angel ‘Superman’ Lopez, Pinot, his team-mate Sebastien Reichenbach and Dumoulin remained in contention.

In one of the more surreal moments of the finale, Froome found himself pursued by a spectator dressed as a Tyrannosaurus Rex and forced to shove the dinosaur aside. 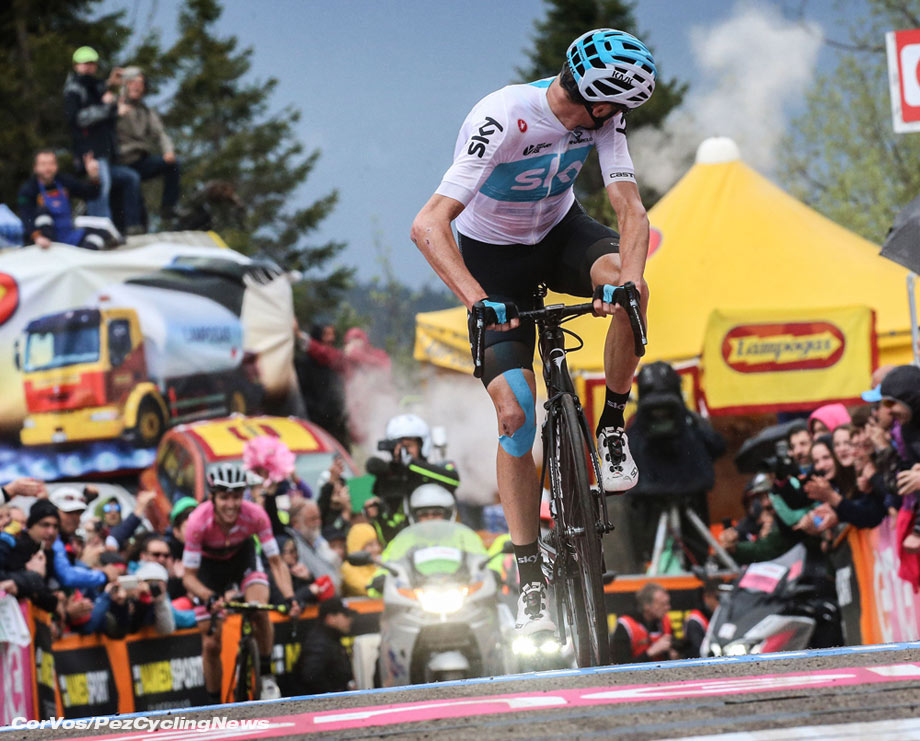 Any doubt as to the Nairobian’s intention to grab this climb by the Demon’s horns was put to bed faster than Ricardo Ricco’s career. With just over four kilometers to go, Froome, perhaps galvanized by the Jurassic incident, took off by himself. Yates, Pozzovivo and Lopez formed a trio behind him, while Dumoulin and Pinot progressed at a more measured pace a little farther adrift.
The Maglia Rosa, one half of professional cycling’s ultimate gemini, then showed his class, ridding himself of his two companions and setting off on a quest to relegate his big Dutch rival as far behind as possible. Froome and Yates, the two British titans, edged their way upward, separated by only a handful of seconds. Passing through a dark and dripping tunnel situated inside the final kilometre, the pair entered the final portion of the nightmare climb, amid a Coliseum-like atmosphere, as thousands upon thousands of tifosi cheered psychedelically.

With the ski resort of Ravascletto in sight, Froome looked over his shoulder and understood that he would not be caught. The Sky leader punched the air, safe in the knowledge that his expedition to Italy will not have been in vain, and Yates took second place, only six seconds back. Late bloomer Pozzovivo rounded out the podium 17 seconds later, followed like his shadow by Colombia’s Lopez. Dumoulin’s exercise in damage-limitation ended with a deficit of 37 seconds on Froome, and, crucially, little more than half a minute on Yates, a result that will be undoubtedly be celebrated in the Low Countries.

Rider Quotes from the RCS:
• Chris Froome: “It’s a really special feeling to win at the top of this climb, especially after the hard start I’ve had. It’s such a monumental climb in this Giro d’Italia. I did the recon and I believed that with 4km to go was the right place to attack. Right to the line, Simon Yates was just behind me. It’s a relief to win here.”

• Simon Yates: “I tried to go for the stage. I did my best to catch Chris. I just didn’t have enough to get it. But as far as the Maglia Rosa is concerned, it’s all good to be second here.”