Race Report: Astana’s Pello Bilbao won the last mountain stage of the 2019 Giro d’Italia. In the final kilometre, Bilbao turned out to have the strongest final sprint from a select group of classification riders and escapees. Overall leader, Richard Carapaz (Movistar) did not contest the sprint, but was only 4 seconds behind Bilbao and in the same time as Vincenzo Nibali (Bahrain-Merida). 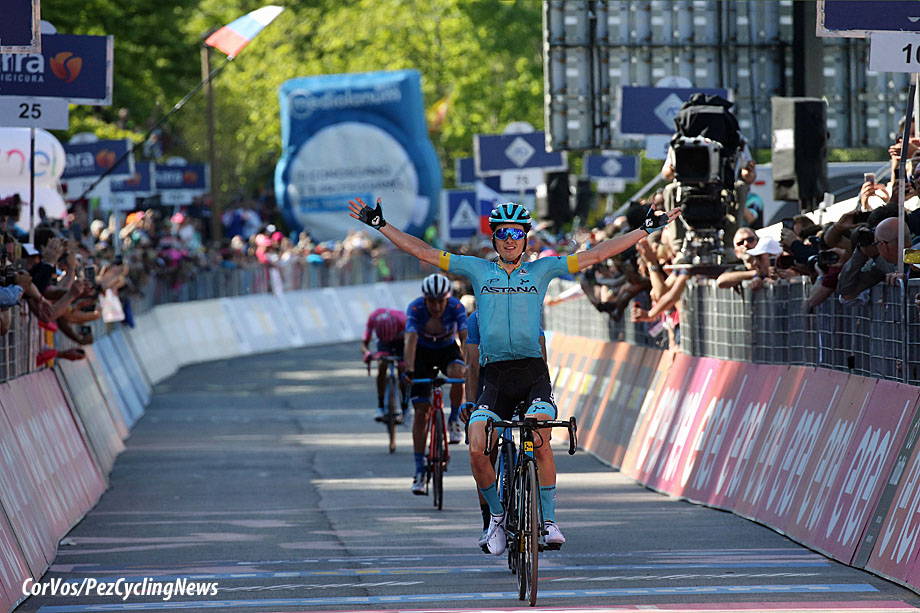 The riders who were still fighting for the final victory in the Giro d’Italia, had one more chance on Saturday to usurp overall leader, Richard Carapaz. Primoz Roglic (Jumbo-Visma) and Vincenzo Nibali, among others, knew that it was ‘all or nothing’. On stage 20 the peloton had no fewer than five categorised climbs, of which the Cima Campo, the Passo Rolle and the Croce d’Aune were Cat 2 and the Monte Avena Cat 1. In addition, there was the Passo Manghen, which os this year’s ‘Cima Coppi’ the highest point of the 2019 Italian Grand Tour. 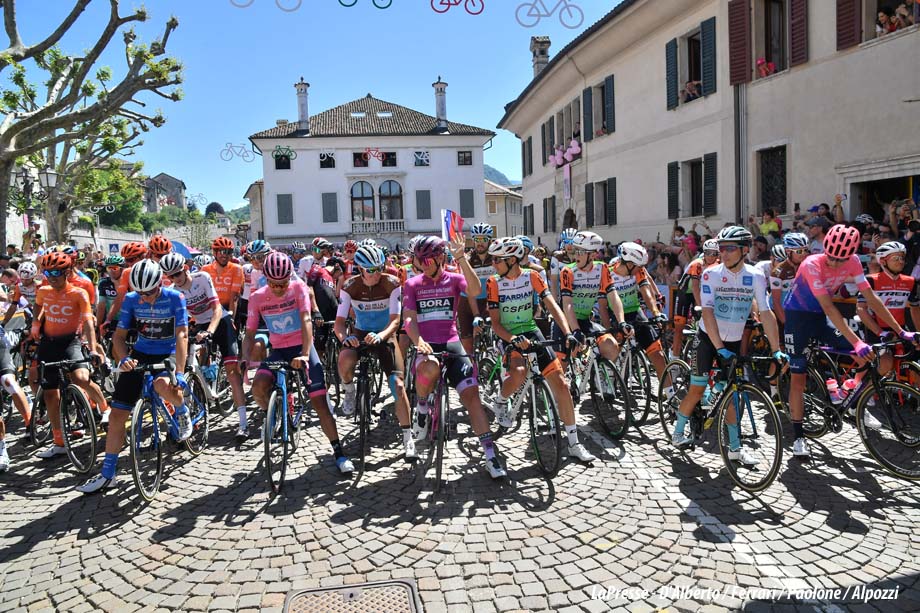 The last road stage and the TT on Sunday

Route:
Stage 20 – Feltre-Croce d’Aune – Monte Avena 194km – total elevation 5,500m
A colossal stage through the Dolomites, with five long consecutive climbs alternating stretches that are either milder or flat. Setting off in Feltre, the stage encounters the first ascents in Arsiè. After cresting the Cima Campo climb (18km), the route descends all the way to Castel Tesino and Scurelle. Next on the route, the ascent to Passo Manghen amounts to 24km – including both the actual climb and the false flat – with nearly 2,000m in vertical altitude gain.

A fast-running descent leads through Molina di Fiemme, Cavalese, Tesero and Predazzo, all the way to Passo Rolle. The climb, although not forbidding, is more than 20km long, and precedes the final ascent to Croce d’Aune-Monte Avena. The final part is composed of two consecutive climbs, totalling nearly 20km. Over the last 6km of the Croce d’Aune climb, gradients never drop below 10%, and even top out at 16%. The route descends briefly after Croce d’Aune, and then bounces back to sharp uphill gradients over the last 7km.

Final kilometres
The final 7km are entirely uphill, with an average 7.4% gradient, peaking at 10%. The route goes up in long hairpins, up to 150m from the finish. Here it takes a sharp turn to the left and enters the flat home stretch, on 5m wide tarmac. 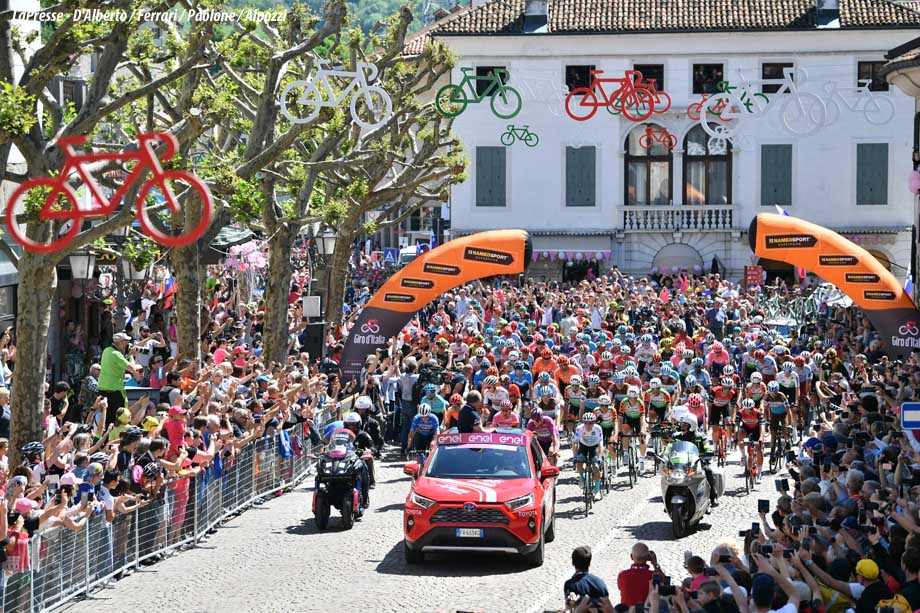 The last chance in the mountains 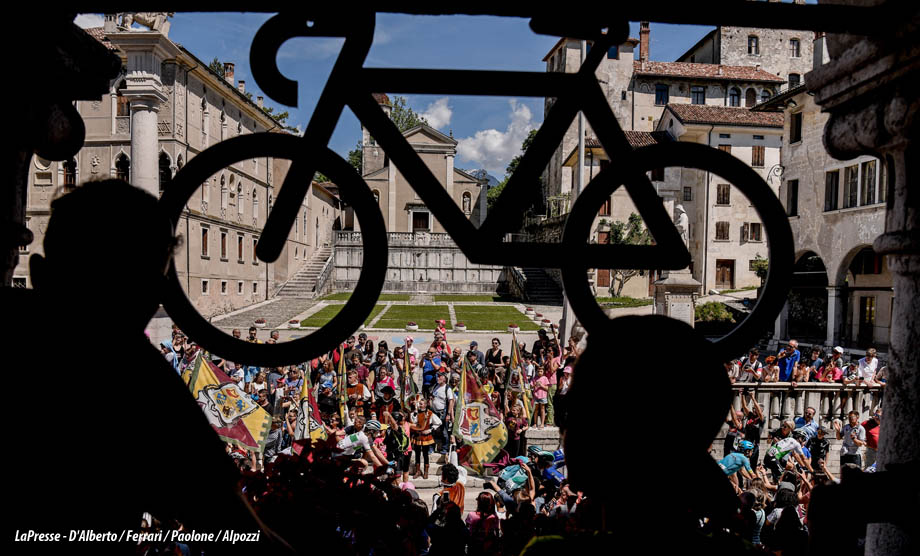 The start in Feltre

The first attacks started immediately after the start. Ryan Gibbons and Marco Haller gave it a try, but were quickly rounded up. Other riders then tried, but they too did not succeed until 12 riders managed brake away from the peloton on the Cima Campo. Ilnur Zakarin, Mikel Nieve, Fausto Masnada, Tanel Kangert, Jay Hindley, Amanuel Ghebreigzabhier, Eddie Dunbar, Dario Cataldo, Damiano Caruso, Eros Capecchi, Pello Bilbao and Andrey Amador managed to take a lead of nearly 4 minutes. 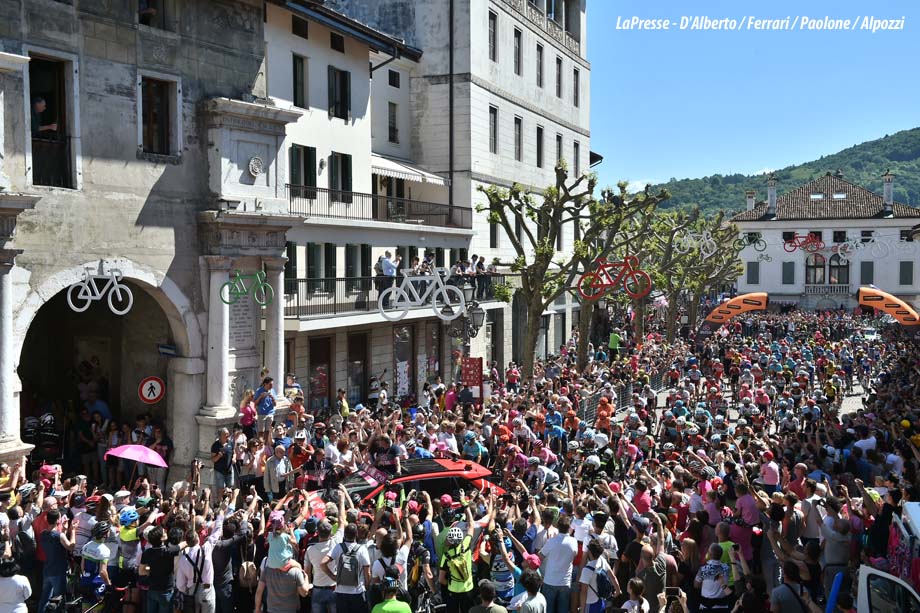 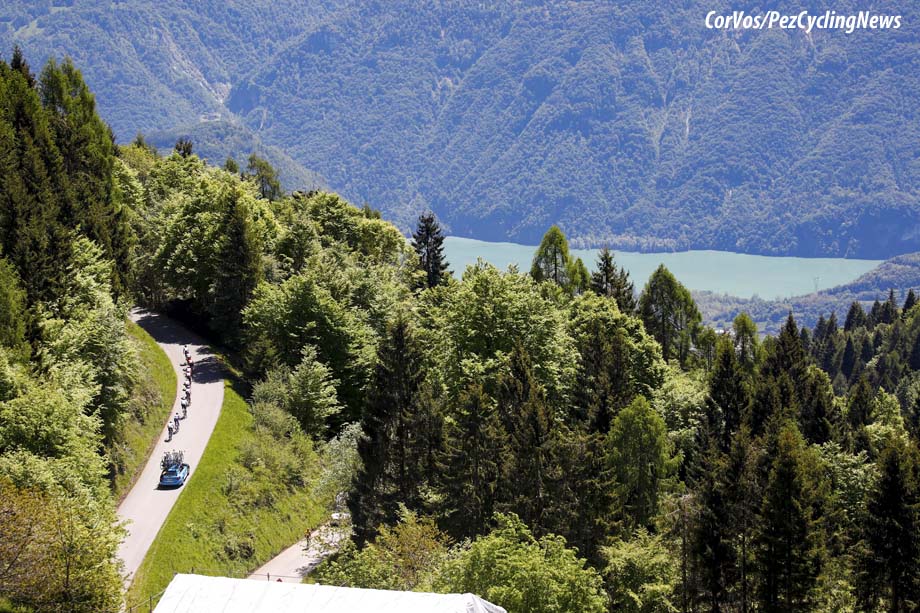 For one rider the leading group was not fast enough. Fausto Masnada decided it was time for him to make his move on the Passo Manghen and solo to the top of the pass to win this year’s Cima Coppi. While he was doing this, the race behind him had exploded. 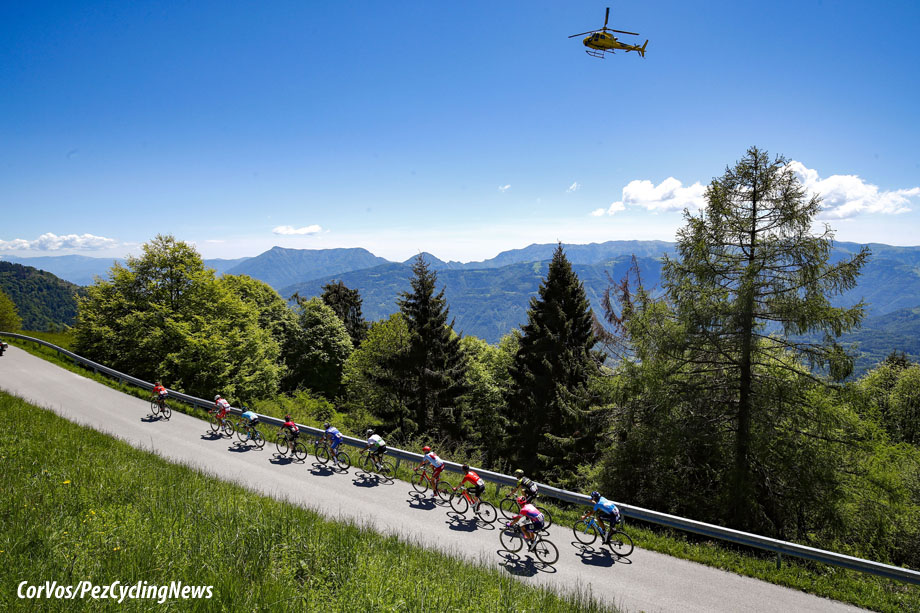 It was looking good for the break, at first 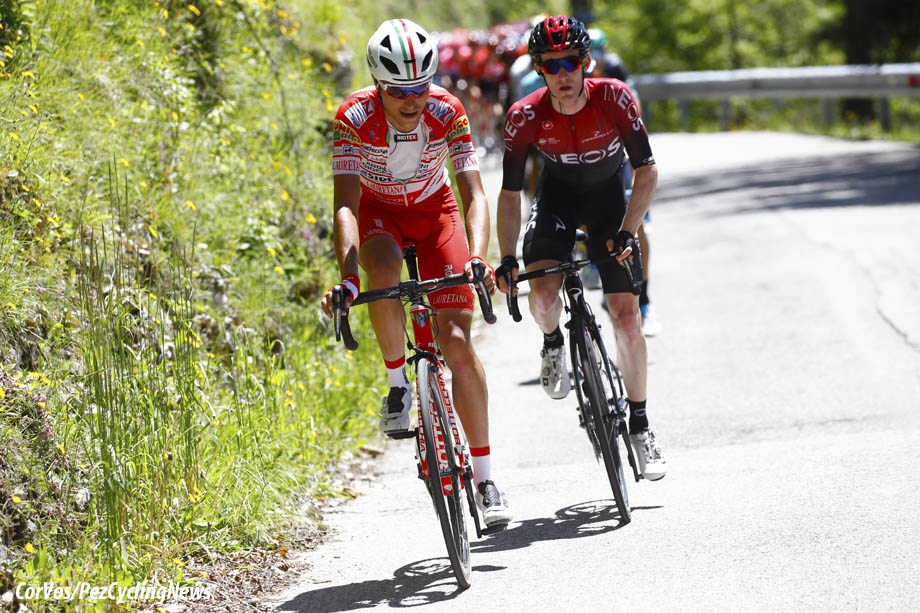 A successful day for Masnada, he made sure of the sprints competition and the Cima Coppi

Miguel Ángel López had thrown caution to the wind on the Passo Manghen, only Carapaz and Mikel Landa were able to follow him. Bauke Mollema, Pavel Sivakov, Simon Yates, Roglic and Nibali had to chase, but were able to reconnect on the descent. After the Passo Manghen it was over for the leading group. They were picked up one by one by the favourites, Masnada was the last to be caught at the bottom of the descent of the Passo Manghen. He was first picked up by Pello Bilbao and then by an attacking Landa, but the lead group came together again. 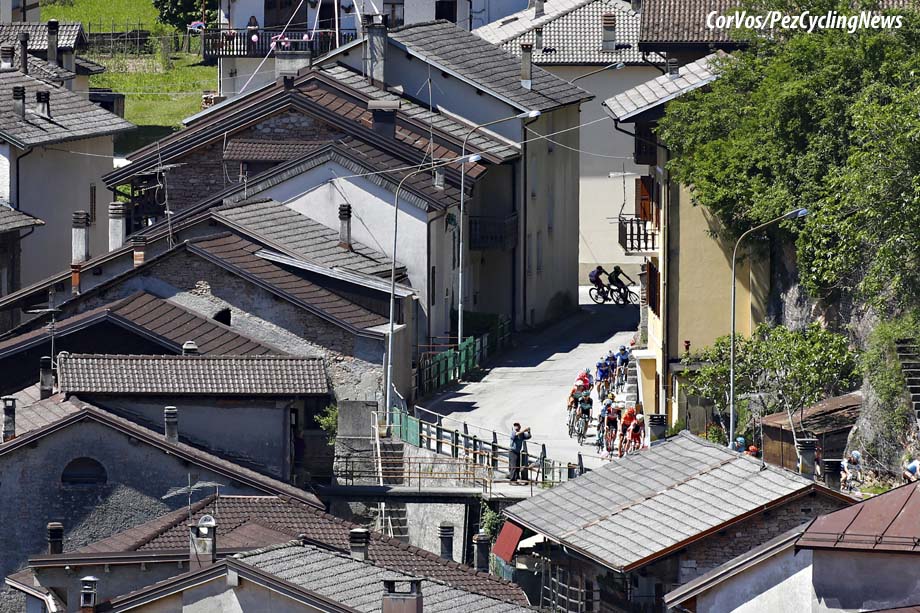 The GC men pulled the race back together 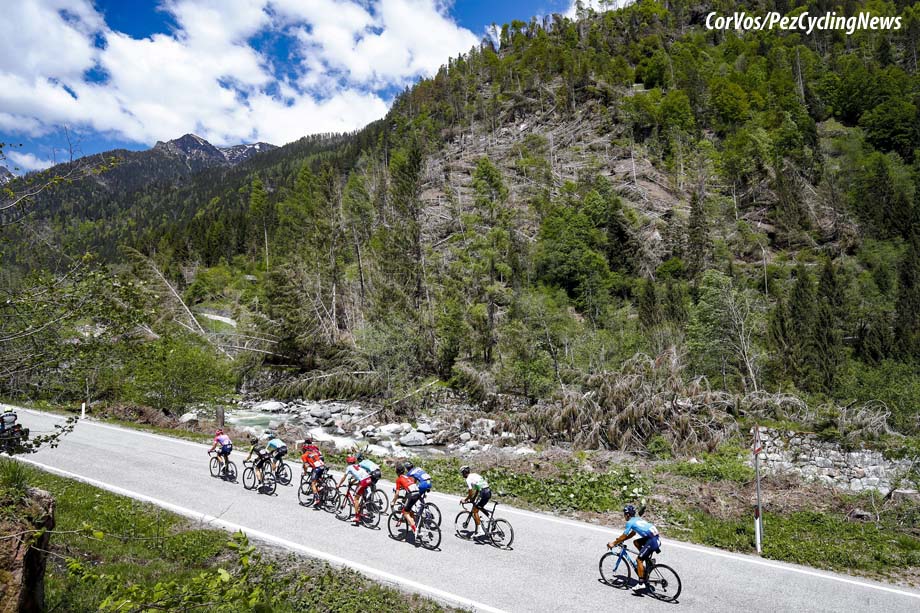 The break was caught and then the race split again

A new leading group formed in the run-up to the Passo Rolle. Giulio Ciccone, Valentin Madouas, Eros Capecchi Nieve, Bilbao, Kangert, Dunbar and Ghebreigzabhier were the riders who eventually came together in this new lead group. They took a maximum lead of more than 3 minutes on the mountain pass. The favourites group called a short truce at this stage of the race. 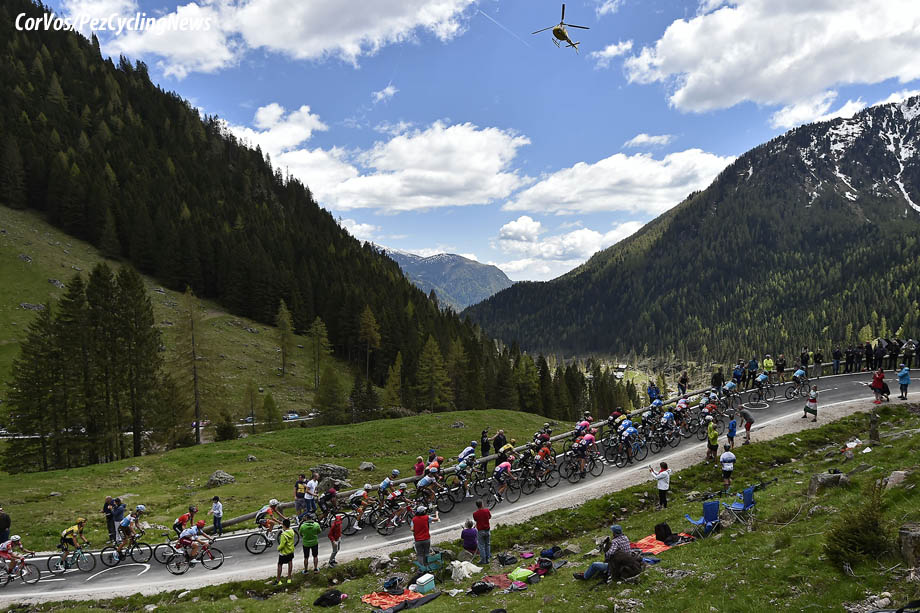 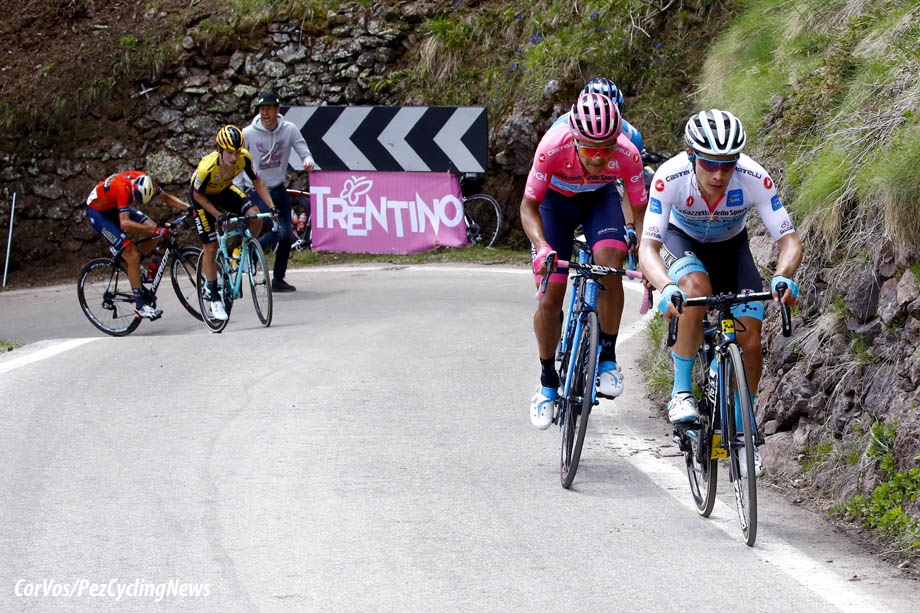 In the run-up to the Croce d’Aune, with 20 kilometres to go, Movistar set the pace and looked like they were aiming for a stage win for Landa, or possibly Carapaz. The lead group and around one and a half minutes on the GC group when the started the climb. 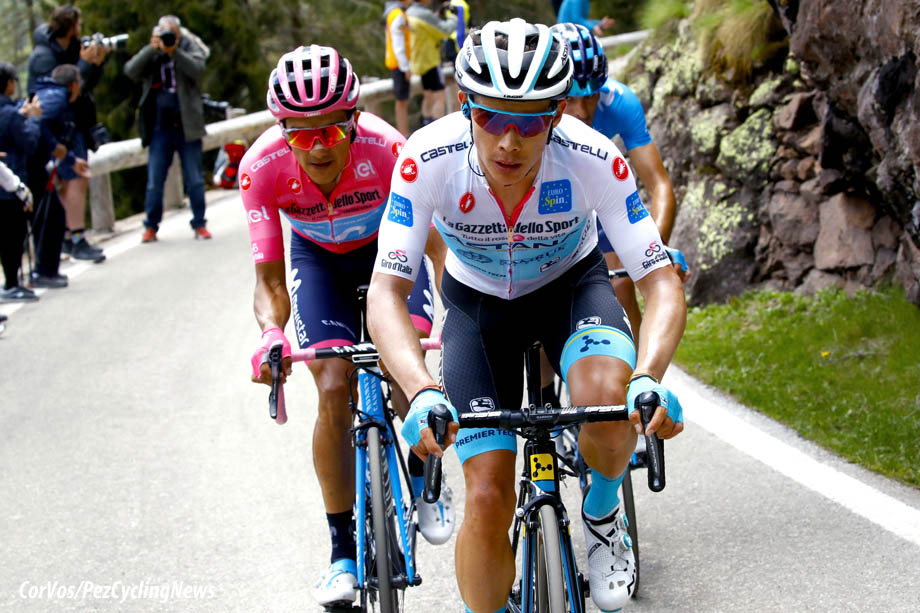 Carapaz was on him 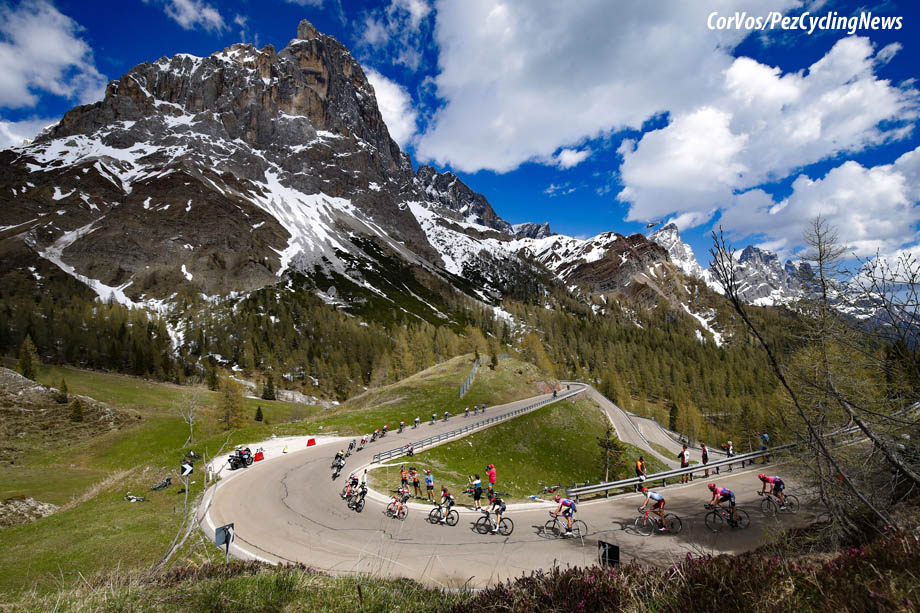 The GC group came back together

The first attacks came from López and then Landa. López seemed to get away, but was quickly taken back, after which Landa counter-attacked. Unlike the Colombian, the Basque did get a gap. Roglic and Nibali were unable to follow, leaving Landa ahead of the favourites group with a 15-second lead, but one minute behind lonely leader Madouas, who had got rid of the other riders in the leading group. 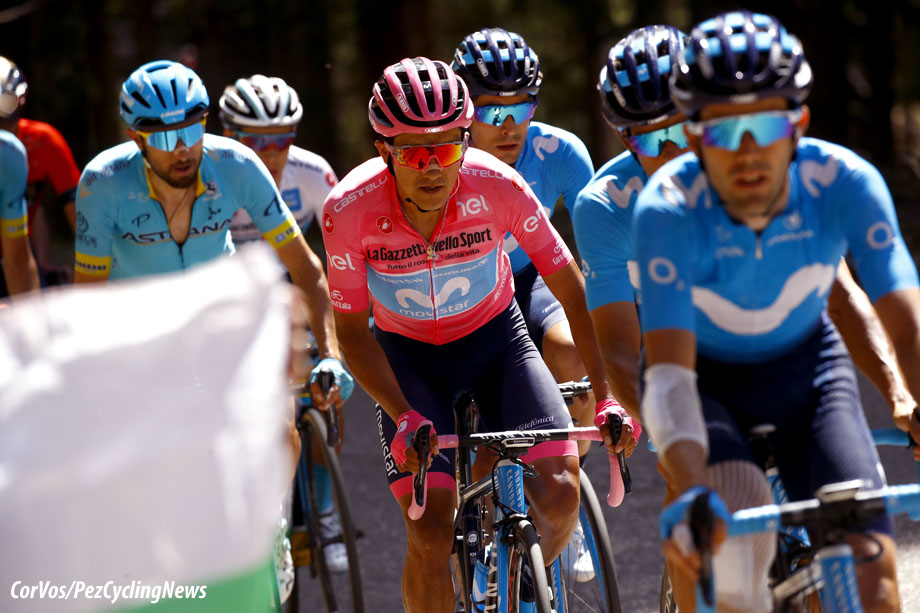 Carapaz had Landa at his side 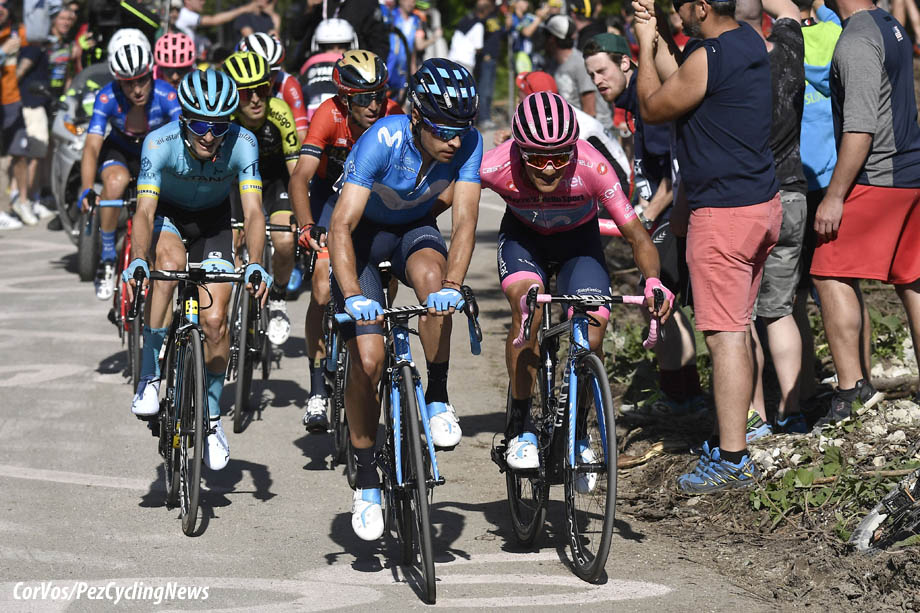 Movistar had a plan

On the descent Nibali put pressure on the group of favourites, with the result that Majka fell and the group was torn apart. At the foot of the final climb, Nibali and Carapaz got to Landa again, the three of them rode hard to push further ahead of the others. They succeeded, although López lost time due to a collision with a spectator. Mollema, who was in the group with Roglic, almost certainly assured himself of 5th place in the final classification – The others were still fighting over the other placings. 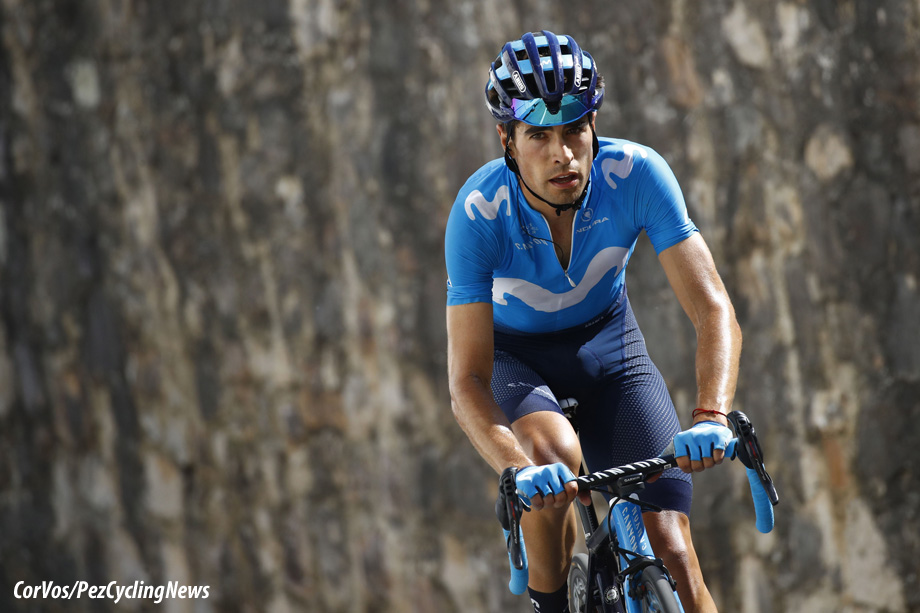 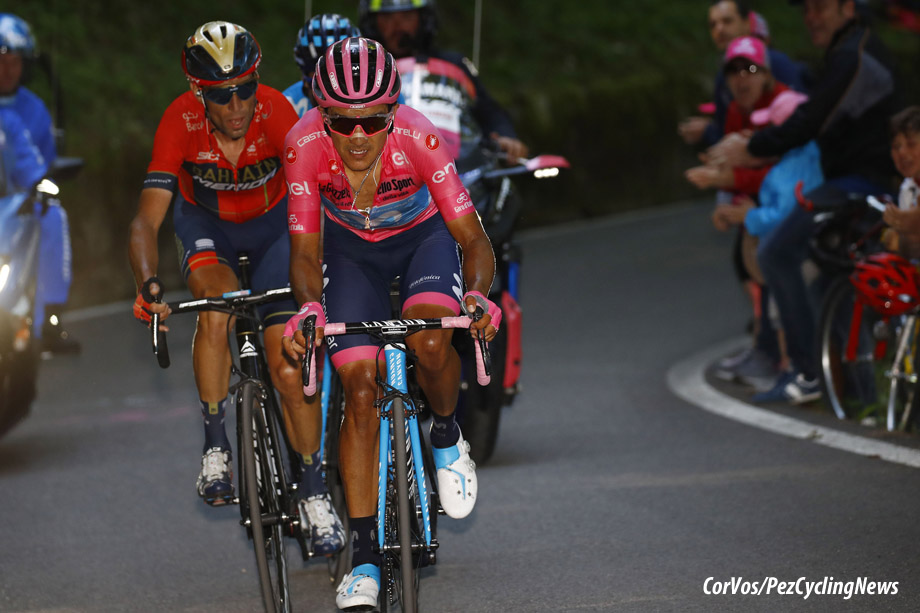 Carapaz and Nibali working together?

The co-operation of Carapaz, Landa and Nibali ensured that the other riders in the leading group were caught one by one in the final kilometres, so that the three classification riders, together with Ciccone and Bilbao, would compete for the stage victory. Carapaz then started the sprint for Landa in Croce D’Aune-Monte Avena, but after a long sprint Landa saw himself being passed by Bilbao, who took his second stage victory in the Giro. 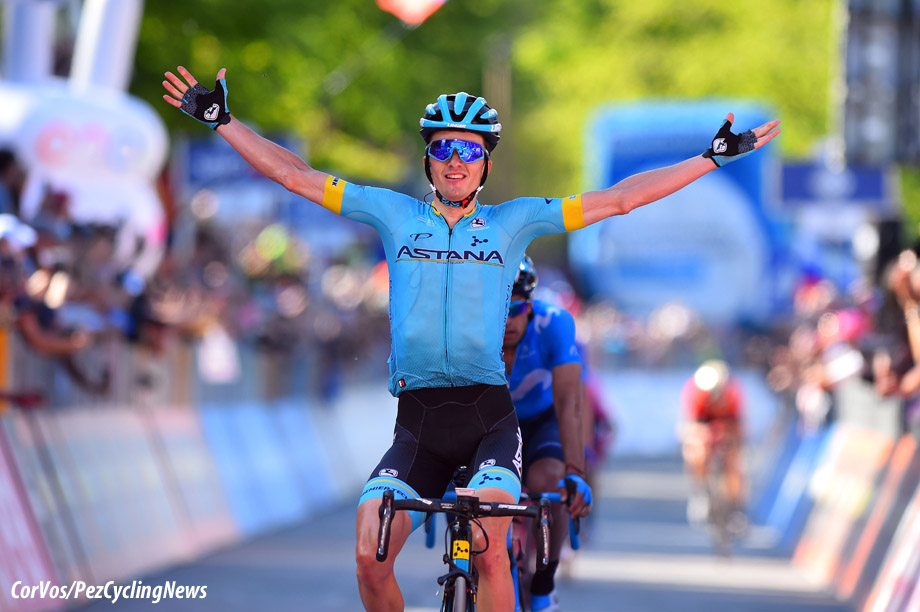 Stage win No. 2 for Bilbao

Carapaz, together with Nibali, finished in the same time as his teammate and with a lead of almost two minutes, he will go into the final time trial in Sunday. Landa passed Roglic in the rankings and is now 3rd overall. 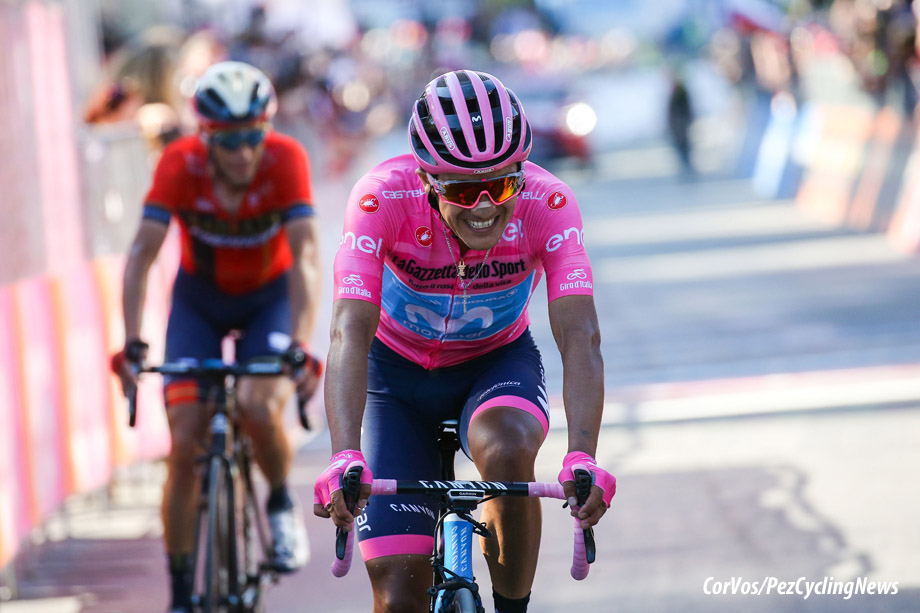 Carapaz and Nibali finished together 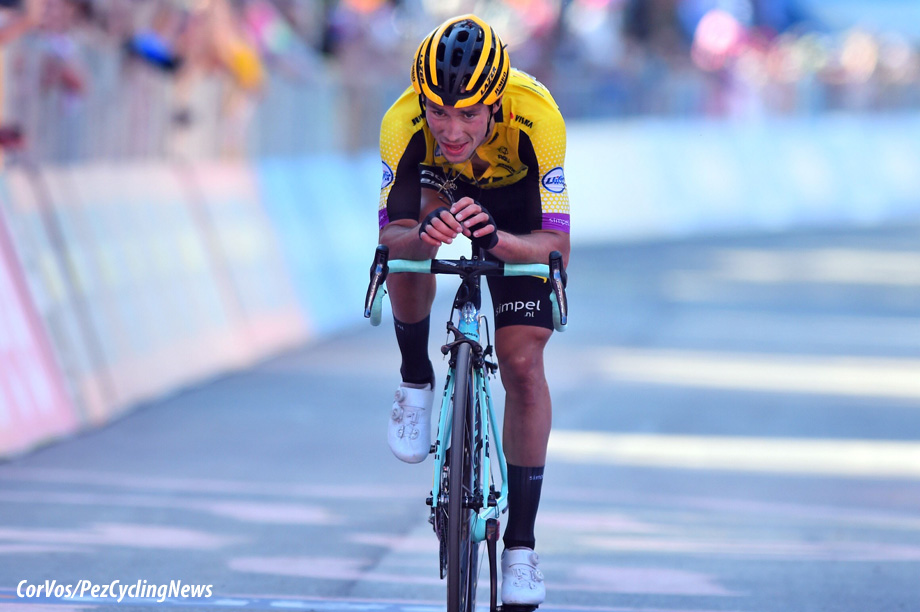 Stage winner, Pello Bilbao (Astana): “I knew that Carapaz would try to give the win to Mikel Landa so I followed the best wheel. My first win was special. This second win is even better than the first one because it’s a big mountain stage. When the GC riders caught us I thought it would be hard but they were tired too.” 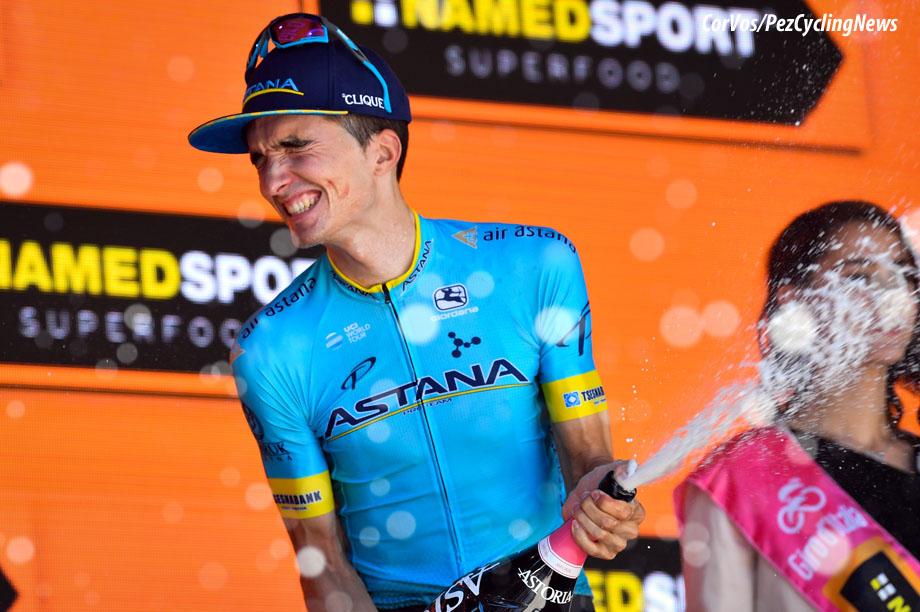 Overall leader, Richard Carapaz (Movistar): “We’ve tried to win the stage with Mikel Landa as well as myself to retain the Maglia Rosa but we’ve missed out by very little. However, we’re happy with how it went today. I believe 1’54” over Nibali is enough although anything can happen in a final time trial.” 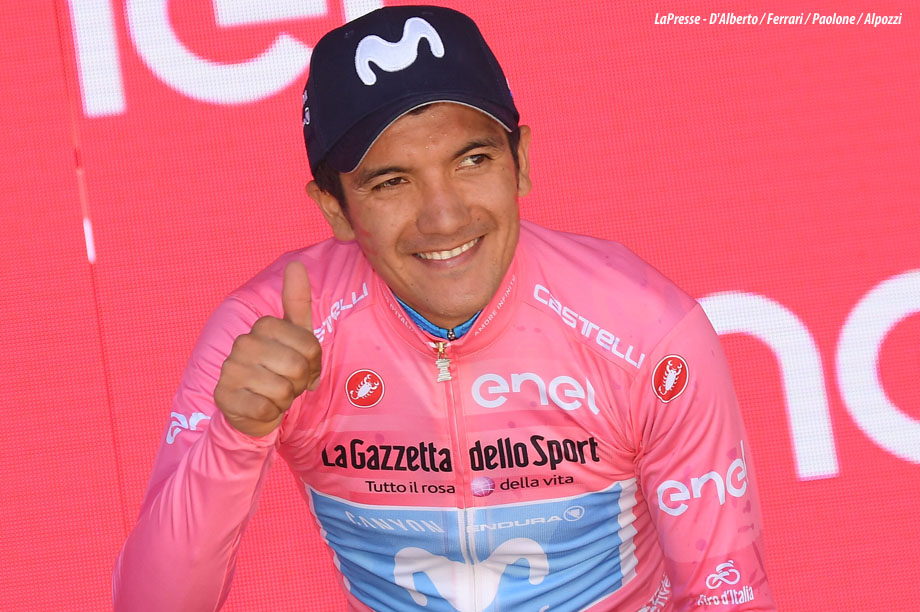 Just one day to go

Keep it PEZ for the final time trial on Sunday!