Race Report: The fourth stage of the Giro d’Italia went to Movistar’s Ecuadorian, Richard Carapaz, after a crazy finalé in Frascati. The peloton was split to pieces in the last six kilometres by a massive crash. Carapaz was one of the lucky riders to escape chaos and jump for the line. Stage favourite, Caleb Ewan (Lotto Soudal), was a close second. 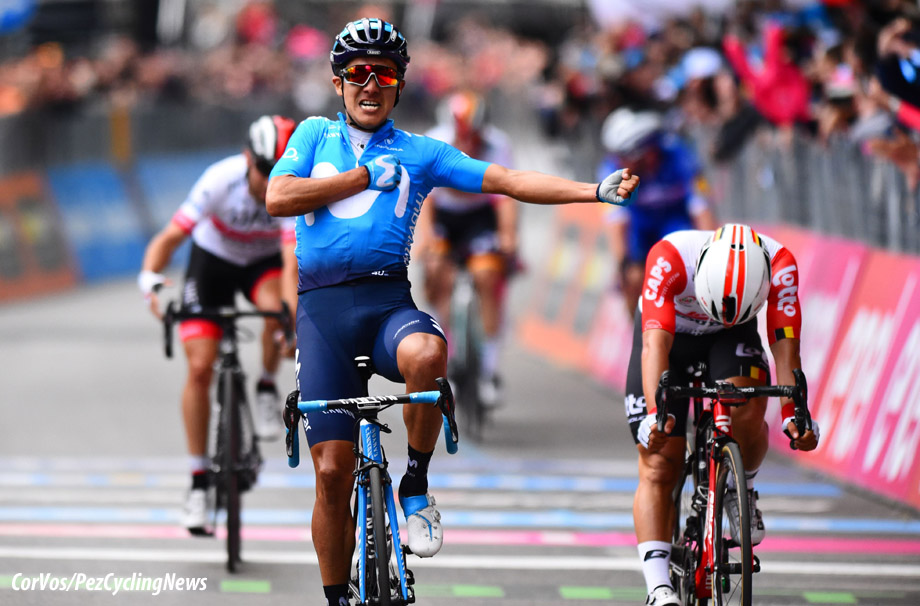 After the break of the day was captured, the stage would come down to a battle on the uphill finish in Frascati. But it was a big crash that made the selection and Richard Carapaz took his chance in the final meters for a fine win for Movistar. 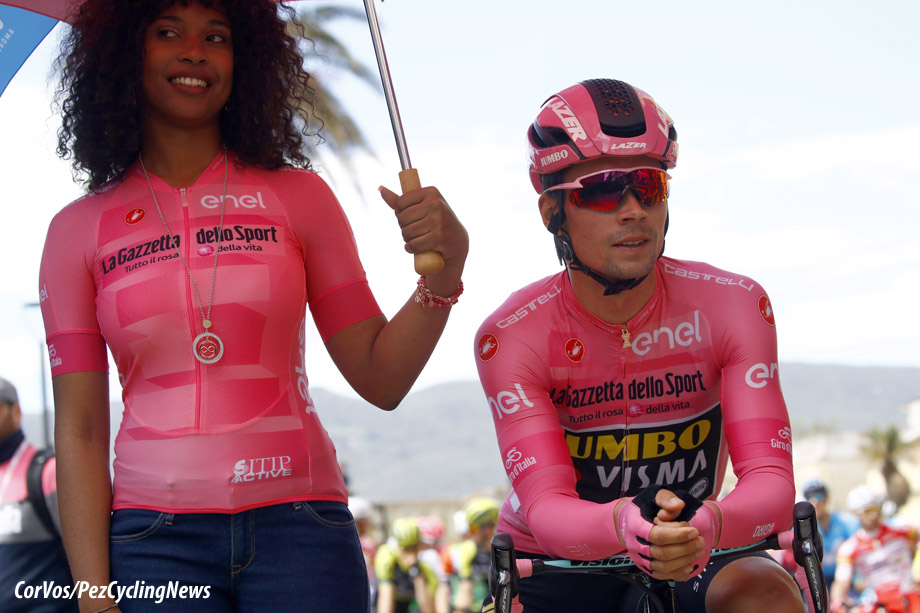 Another day in pink for Primoz Roglic

Route:
Stage 4 – Orbetello-Frascati 235km – total elevation 2,300m
The stage is very long, but with no challenging climbs. The final part is rough, and the closing kilometres are uphill. After the first section on the roads of Maremma, the route climbs up to Manciano, follows the mild undulations past the towns of Tuscania and Vetralla, and circles the conurbation of Rome. After the intermediate sprint in Mentana, the stage continues on undulating, twisting roads, still around Rome. 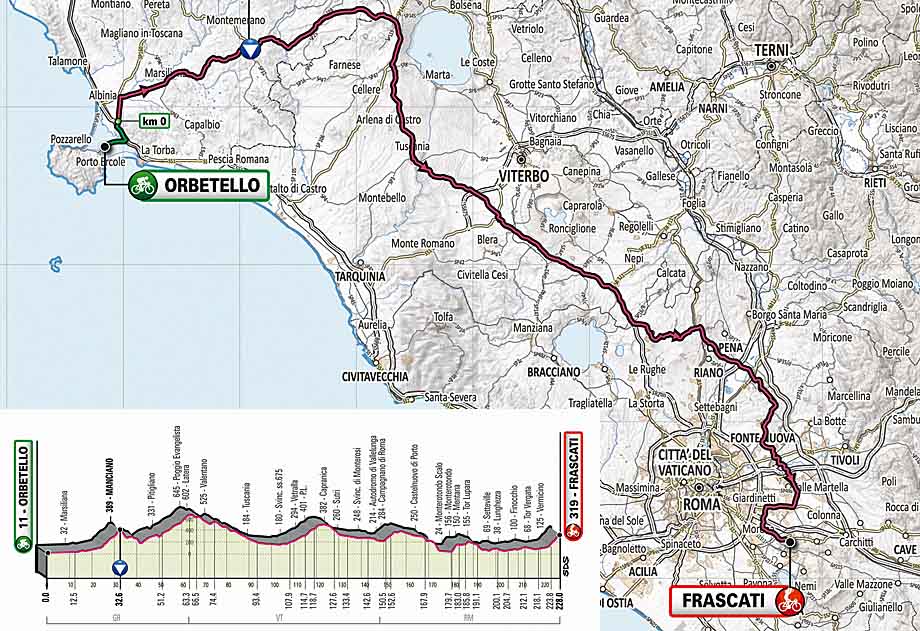 Final kilometres
The last 5km are initially downhill with some turns on roundabouts. Following that is an undulating stretch leading to the final 2.5km climb with slopes that average around 4-5% and peak up to 7%. The last kilometre is entirely uphill with a slope up to 4%, and the final 250m straight is on a 6.5m wide asphalt road. 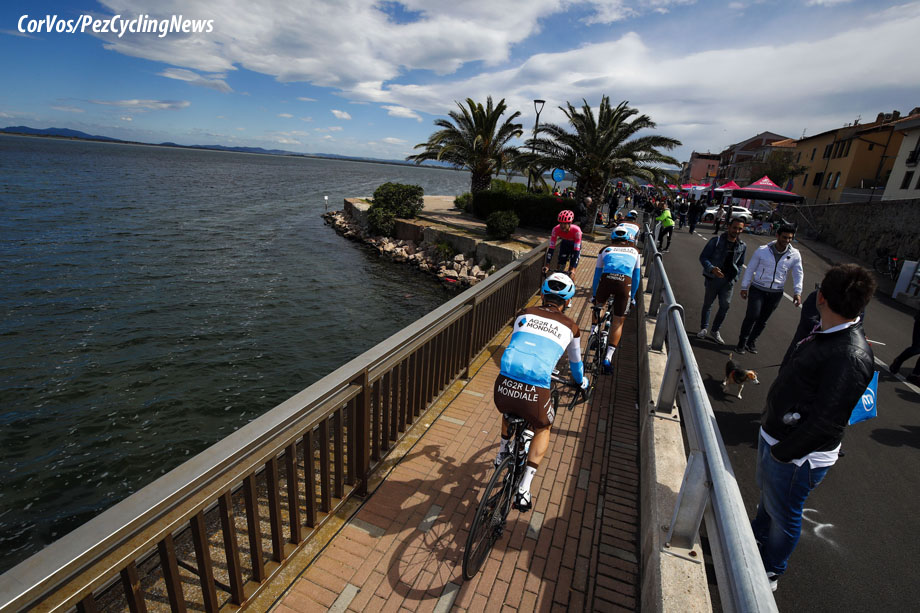 With almost three thousand meters of climbing before the finish in Frascati, it promised to be a tough stage. The peloton left Orbetello without Juan Sebastian Molano (UAE Team Emirates) who didn’t start due to health reasons. Just like stage 3 there were few riders who wanted to go on an adventure. 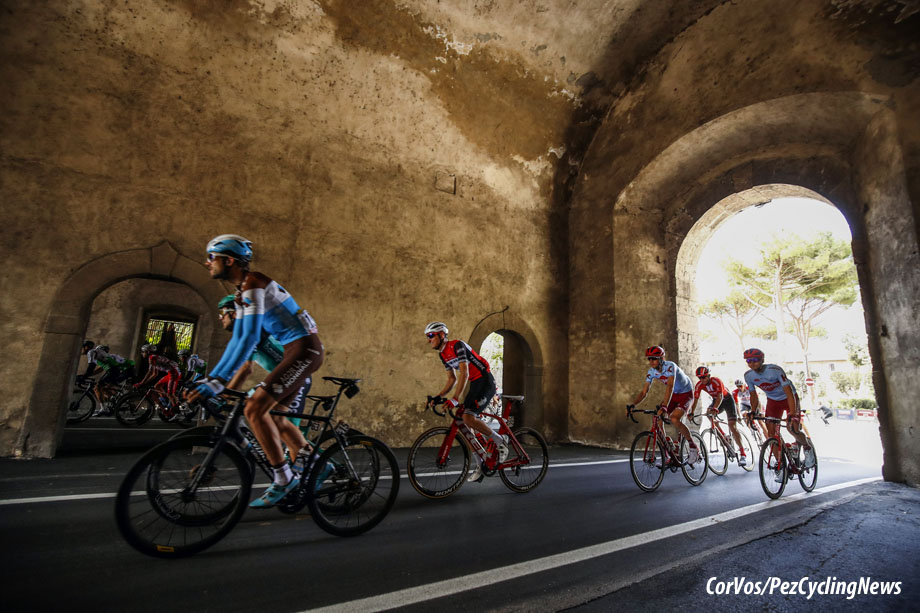 The peloton on its way out of town 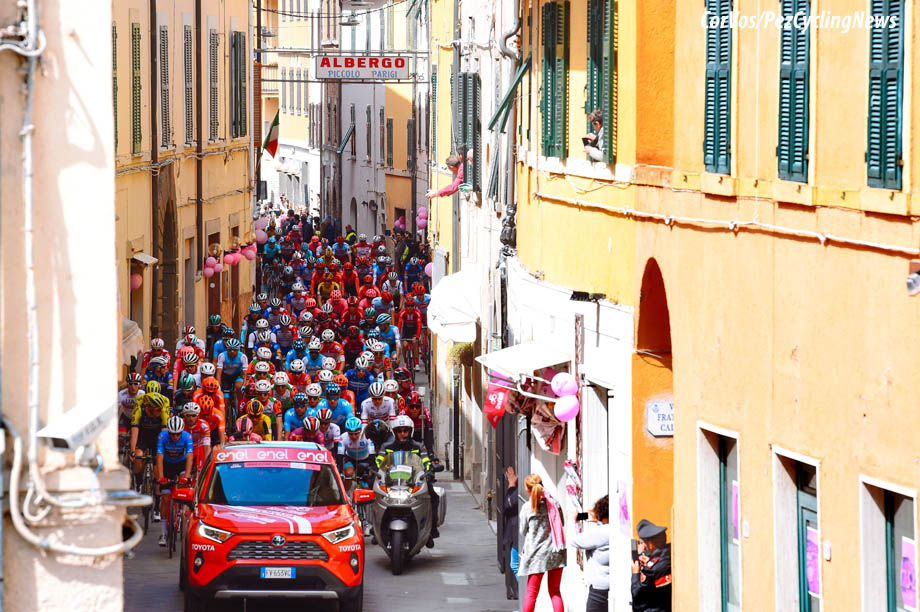 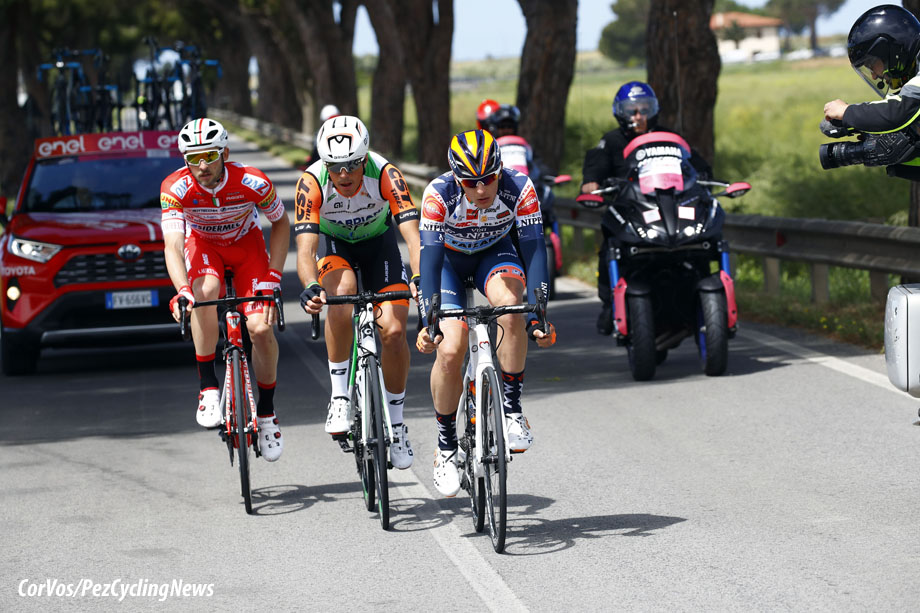 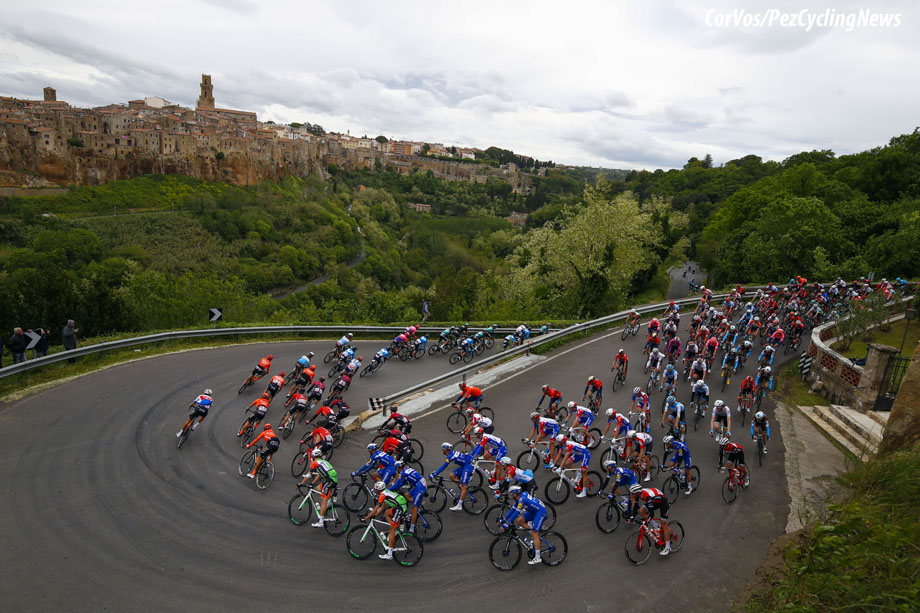 The peloton heads towards Roma

It was Frapporti who crossed the Manciano first, ahead of Maestri and Cima. The peloton came up thirteen minutes later on the only climb of the day, but the situation was under control with Lotto Soudal and Groupama-FDJ working together. Caleb Ewan and Arnaud Démare had plans for the finish. 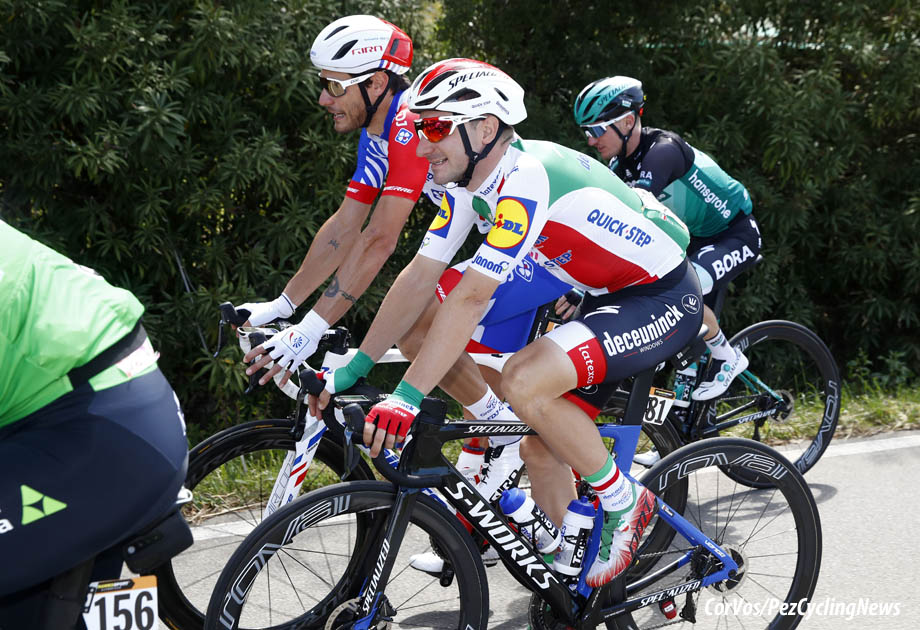 Elia Viviani seems to have forgotten the debacle of stage 3 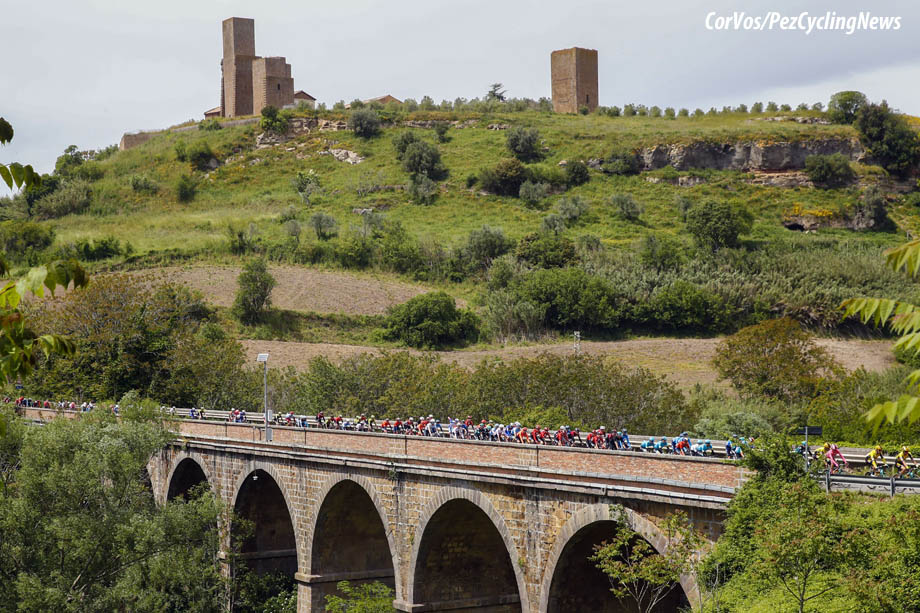 The peloton didn’t chase at first

Arnaud Démare collected some points at the intermediate sprint, as the domestiques did their work for the day’s favourites. The break looked strong, but the pack came closer and closer. The pace increased, causing nervousness in the peloton to rise. 12 kilometres from the finish their was a crash involving James Knox (Deceuninck – Quick-Step) and World Hour Record holder, Victor Campenaerts (Lotto Soudal), among others. Both riders were eventually able to continue. 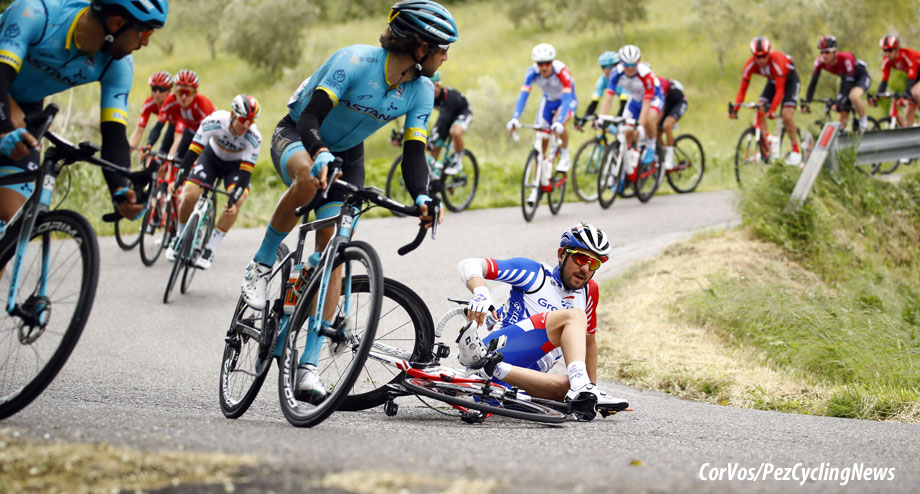 One of many crashes – This one for Olivier Le Gac 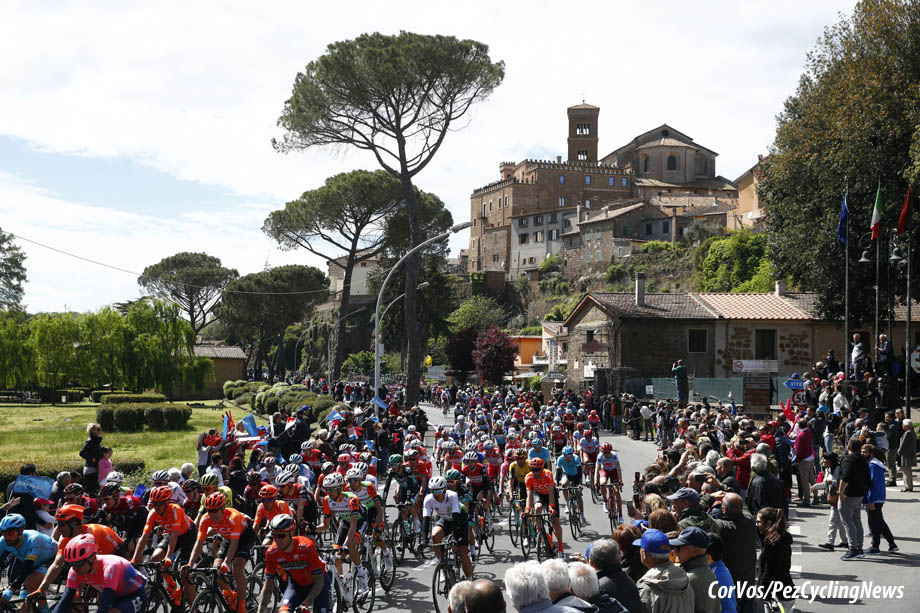 The crowds were out on the road to Rome

The puncheurs were particularly looking forward to the uphill finish, although the sprinters also stood a chance of a victory. The escape was caught just ten kilometres from the finish line and the stage was set for the favourites. The pace again went up, and the GC riders had to make a move to stay near the front. 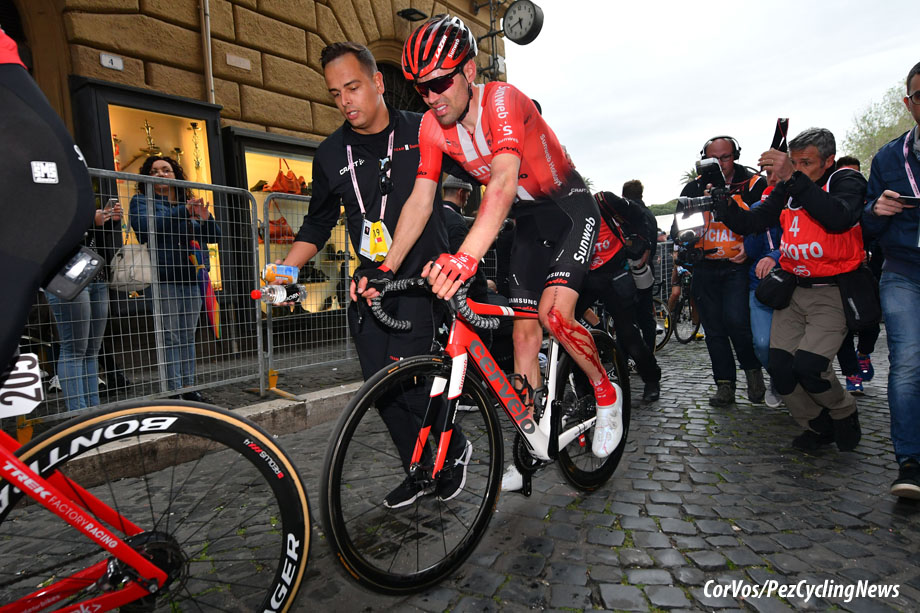 At 6 kilometres out from the finish there was a big crash. Tom Dumoulin, leader of Team Sunweb was amongst them and tried to return to the front, but the grimacing Dutchman had damaged his knee and lost time to the other top men. 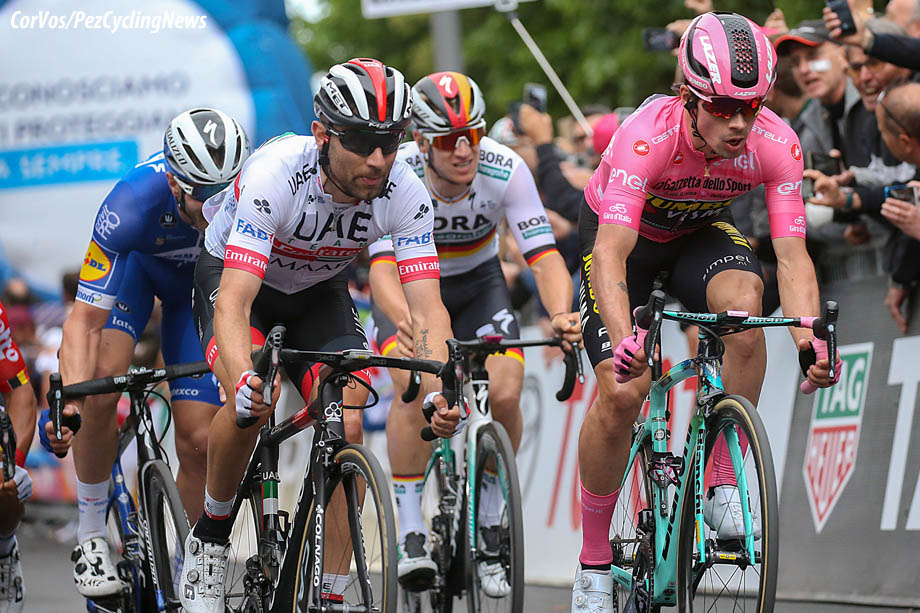 The pink jersey missed the crash 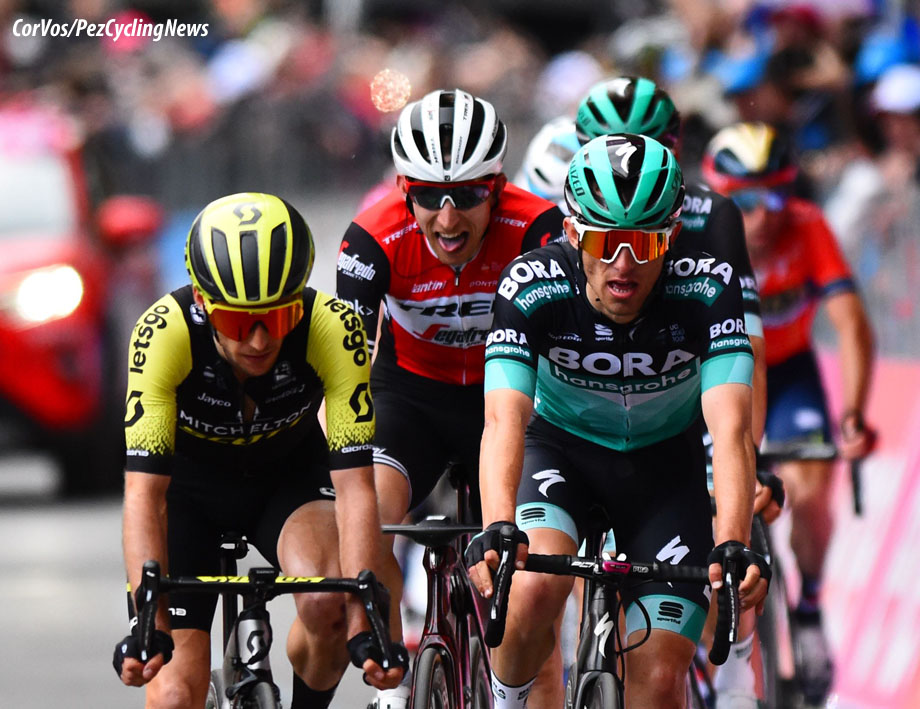 Yates and Majka made the chase group

Overall leader, Primoz Roglic (Jumbo-Visma) was at the front, but Vincenzo Nibali (Bahrain-Merida) and Simon Yates (Mitchelton-Scott) were nowhere to be seen at first, but did make the chase group. Only a small group was not held up by the crash, including Roglic, Démare and Ulissi. These riders would fight for the stage victory. UAE Emirates was the only team with several riders in the front, so Ulissi could count on a real uphill lead-out. 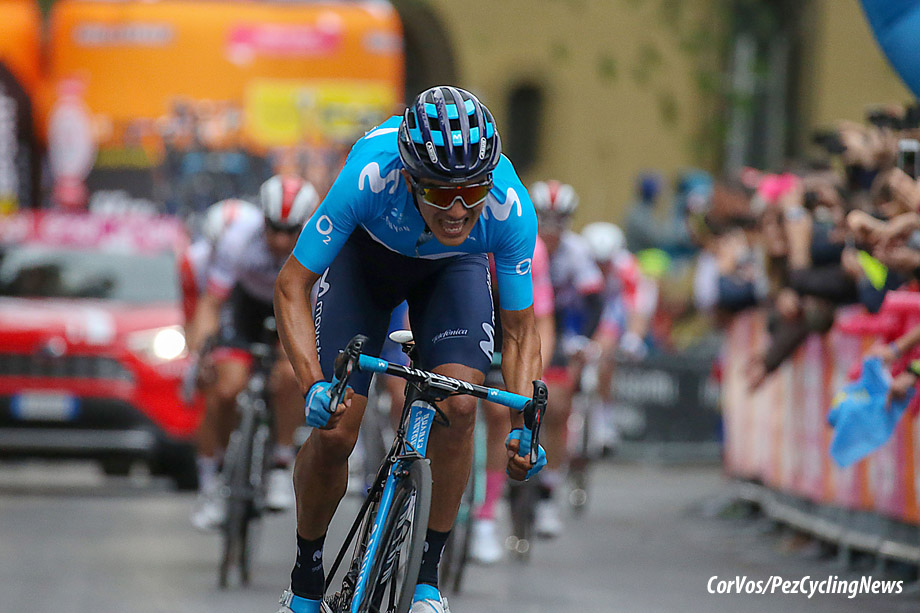 It was the light blue jersey of Movistar’s Richard Carapaz who jumped from the group to hold off a fast-finishing Caleb Ewan to take the victory. Stage 2 winner, Pascal Ackermann (Bora-Hansgrohe) brought in the others of the front group with the pink jersey in 6th place.

The peloton was split to pieces, it would take time to see who had lost in the chaos of stage 4. 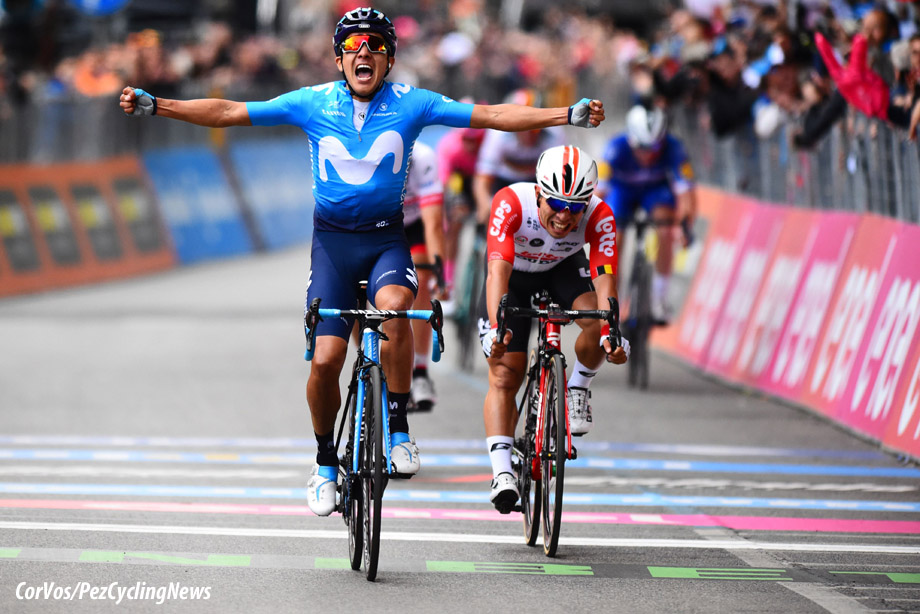 Stage winner, Richard Carapaz (Movistar): “I didn’t expect to win today. It was a long stage with some hills towards the end. Our plan was just to protect Mikel Landa to not lose time but a crash at the end changed everything. I was up against sprinters for the stage win so I had to anticipate their action. The moment I chose to attack was perfect.”