The break goes all the way

Giro d’Italia Stage 18: On what was expected to be a sprinter’s day, the break was allowed to ride away to contest its own race. After a brave attack from Remi Cavagna (Deceuninck – Quick-Step), it was Alberto Bettiol (EF Education-Nippo) who finished solo in Stradella for his first win in Italy. Egan Bernal (INEOS Grenadiers) had no problem holding his overall lead. 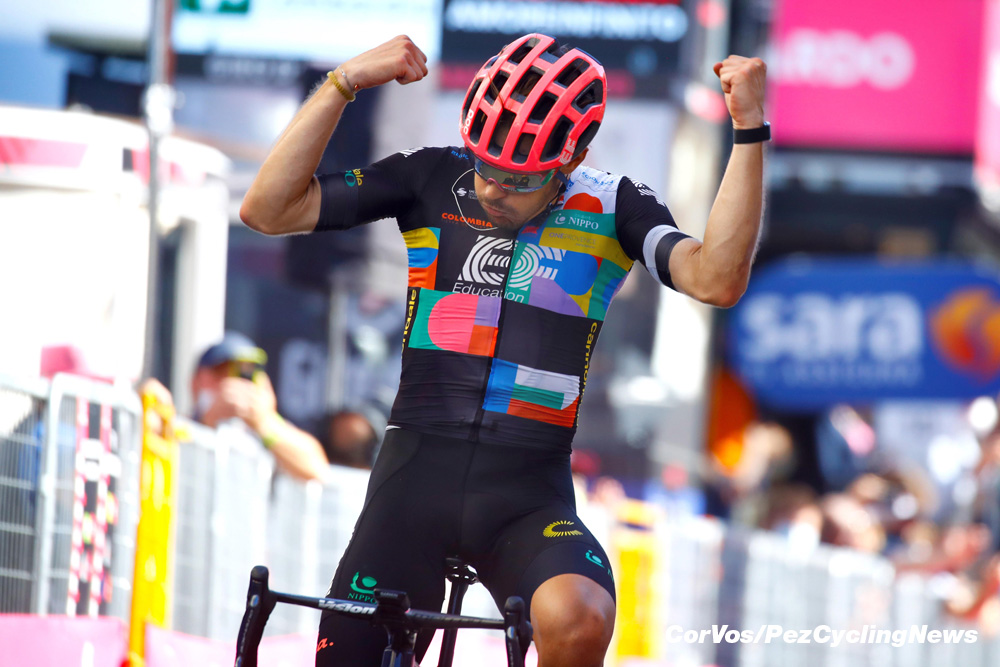 Alberto Bettiol has now got a stage of the Giro d’Italia to his name. The EF Education-Nippo Italian was part of the early break and managed to catch and pass Rémi Cavagna in the finalé to then solo to stage victory. 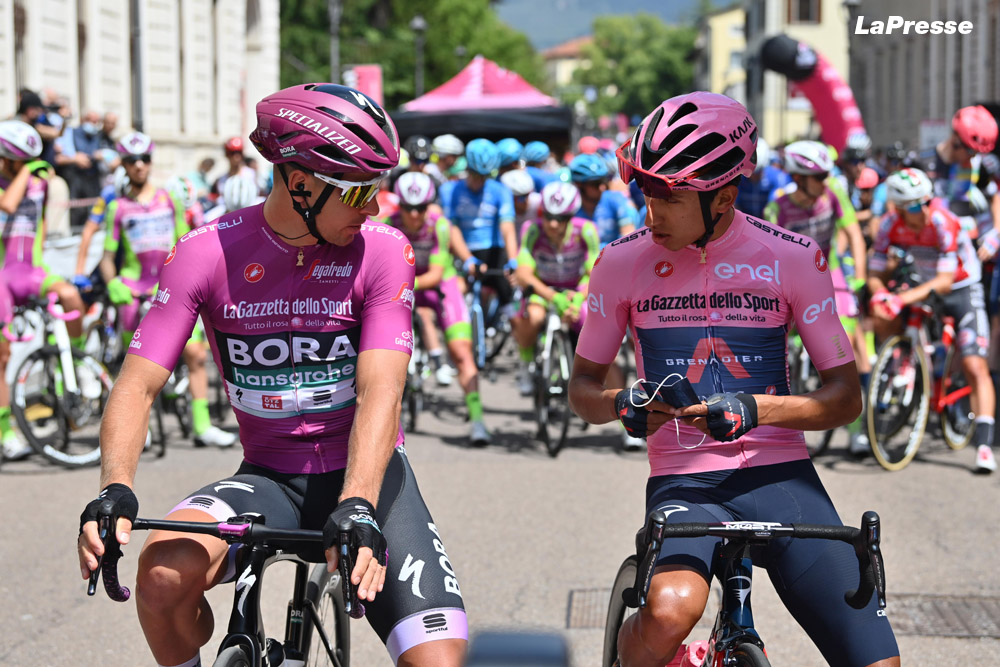 Should be an easy day for Egan Bernal, maybe not so much for Peter Sagan

Giro stage 18 route: The stage travels across the Po Plain, from north to south, on straight and mostly wide roads. As the stage passes through several urban areas, roundabouts, traffic islands and street furniture will be found along the route. A few undulations over the last 30 km will be the only topographical impediments. After descending from Canneto Pavese, the route continues almost straight to the finish in Stradella. 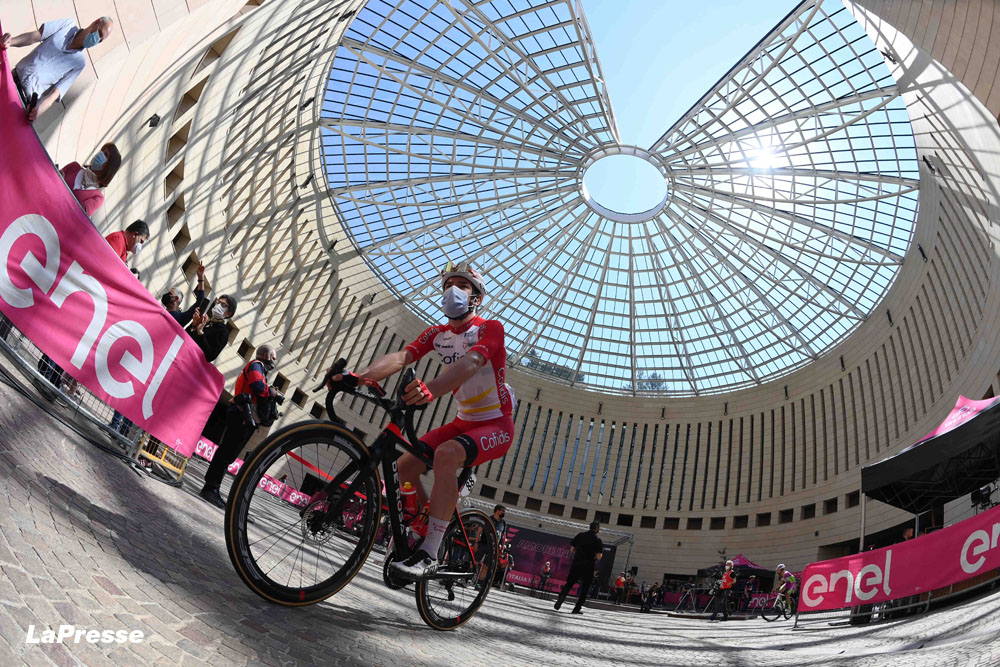 Could Elia Viviani take the stage win or is it a day for the break?

It seemed an ideal stage for the attackers and so many riders showed interest in the break of the day. After more than 30 kilometres, a large leading group was formed, but initially the 23 didn’t get very far. In the peloton, several counter attacks tried to cross to the leading group, but the men from BORA-hansgrohe put a stop to it. 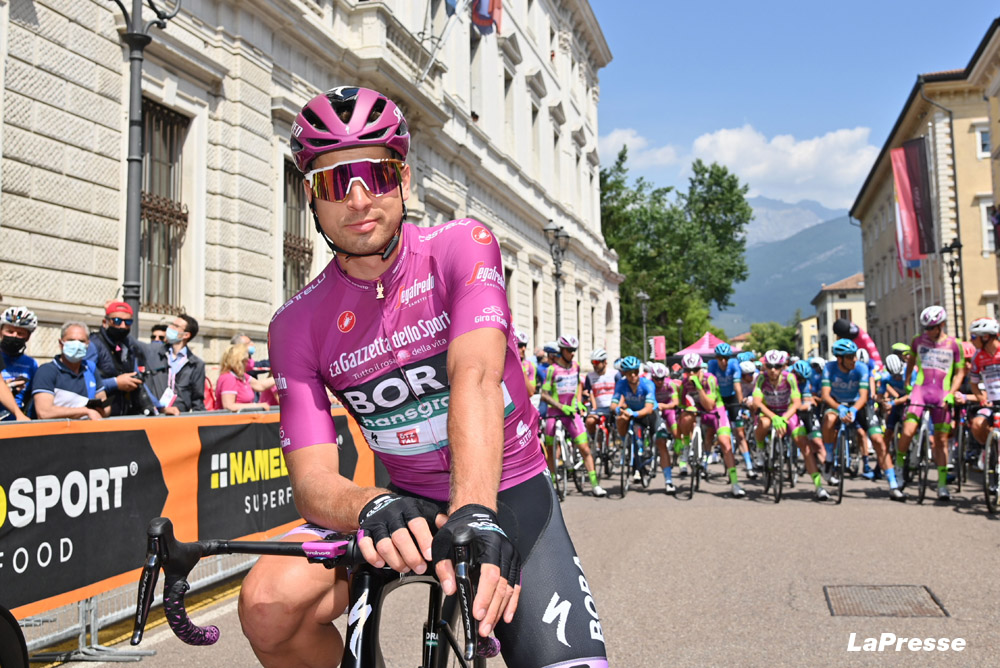 Sagan will be protecting his Maglia Ciclamino

With just over 170 kilometres to go, finally the peloton let the break go. After a while, Egan Bernal’s teammates decided to control the pace of the peloton and so the lead of the front group continued to fluctuate around 7 minutes for some time. The Spaniard Gorka Izagirre was the best placed rider in the early break in 24th place on GC. The Astana-Premier Tech rider was already almost an hour down and was no longer a threat to Egan Bernal’s pink jersey. There was no reason for INEOS Grenadiers to chase. After a while, the British team gave up and so the escape started the last 60 kilometres with a good 15 minutes lead. 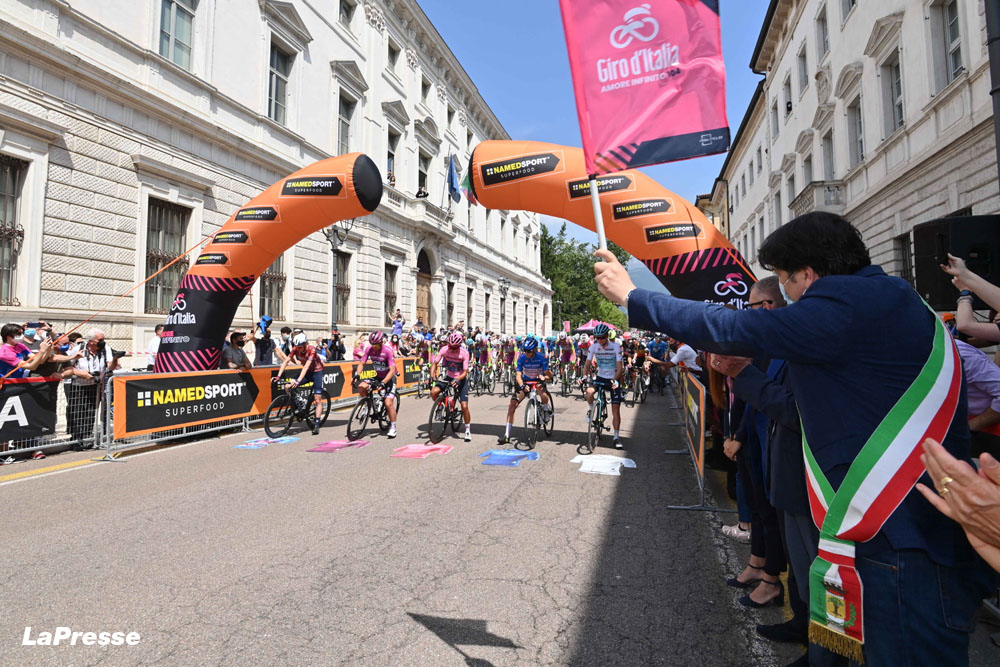 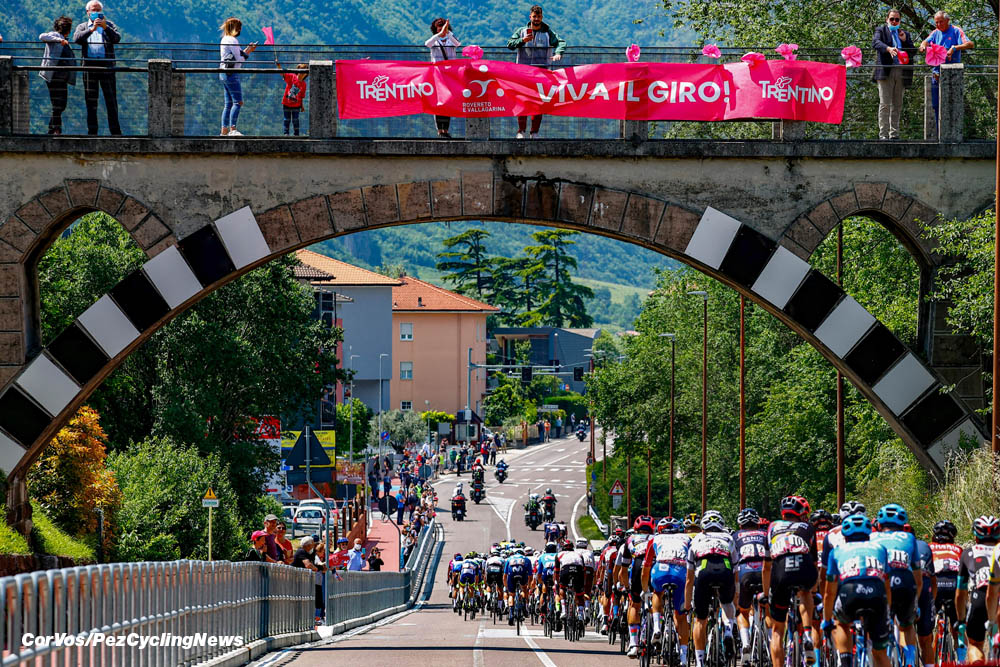 The peloton wasn’t in a big hurry at the start

With 35 kilometres to go, the front group hit the Montù Beccaria (3.4km at 4.1%), the first climb of the day. Samuele Battistella decided to be the first to attack. Filippo Zana jumped after him and we had two Italians at the head of the race. Nico Denz saw the danger and managed to make the crossing on his own, although the time difference was small. 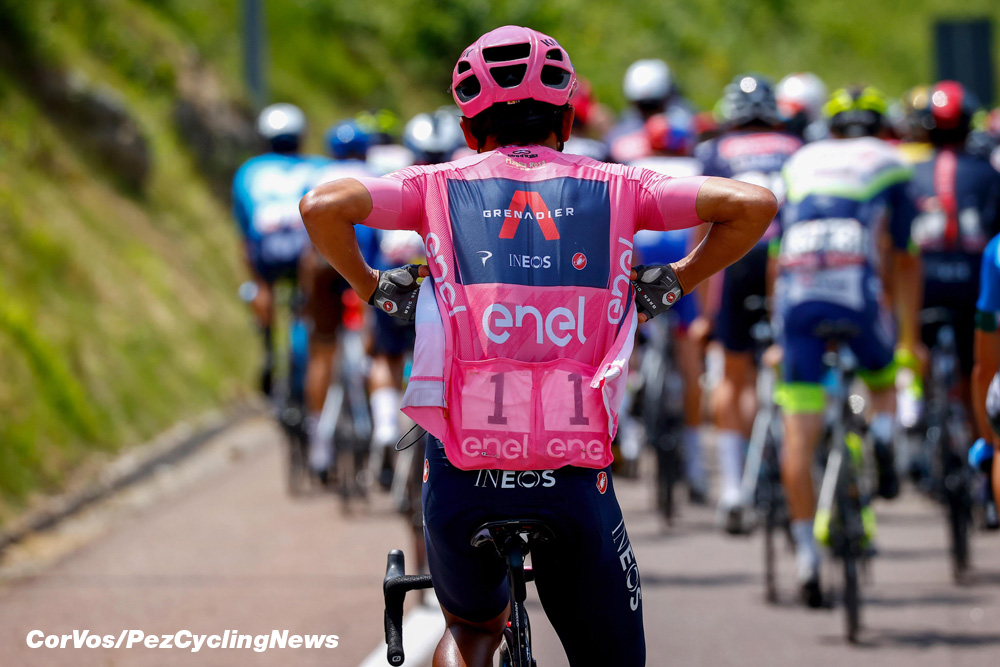 A bit of wardrobe adjustment for Egan Bernal

The first attack attempts by Battisella, Zana and Denz were nipped in the bud. The next attack came from Patrick Bevin and the fast-man of Israel Start-Up Nation, together with Alberto Bettiol, Stefano Oldani, Jacopo Mosca, Nicolas Roche and Gorka Izagirre, we had a new escape. Surprisingly Diego Ulissi was missing. 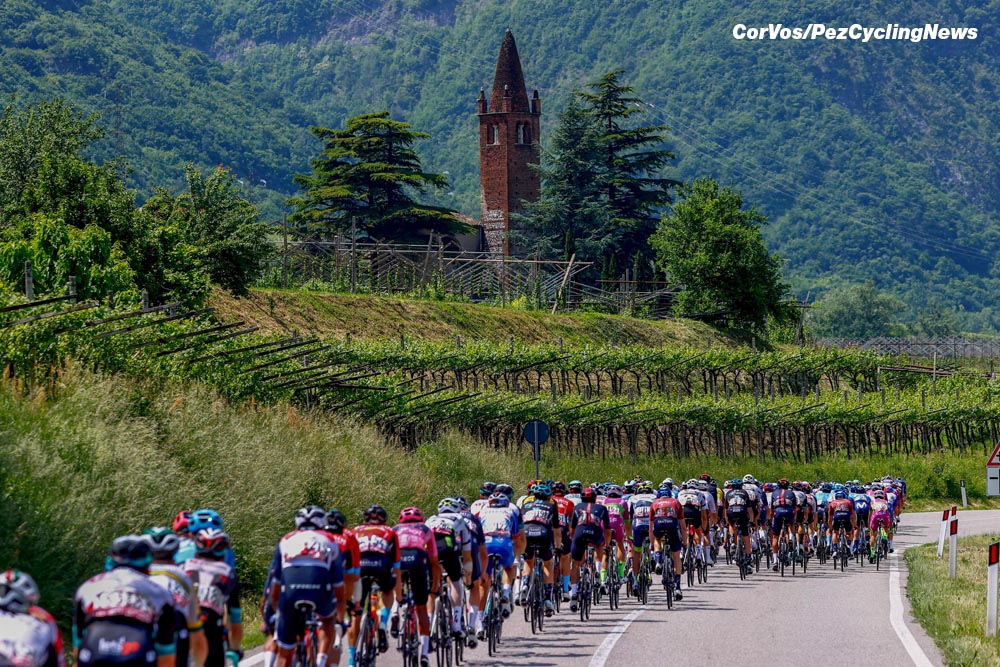 On the climb to Castana (5.3km at 3.9%), Bettiol rode a high pace and the winner of the 2019 Tour of Flanders put his escape companions on the rack. In the chasing group Ulissi jumped across to the Bettiol group. There was a moment of calm and this was the moment for Rémi Cavagna to make his move. 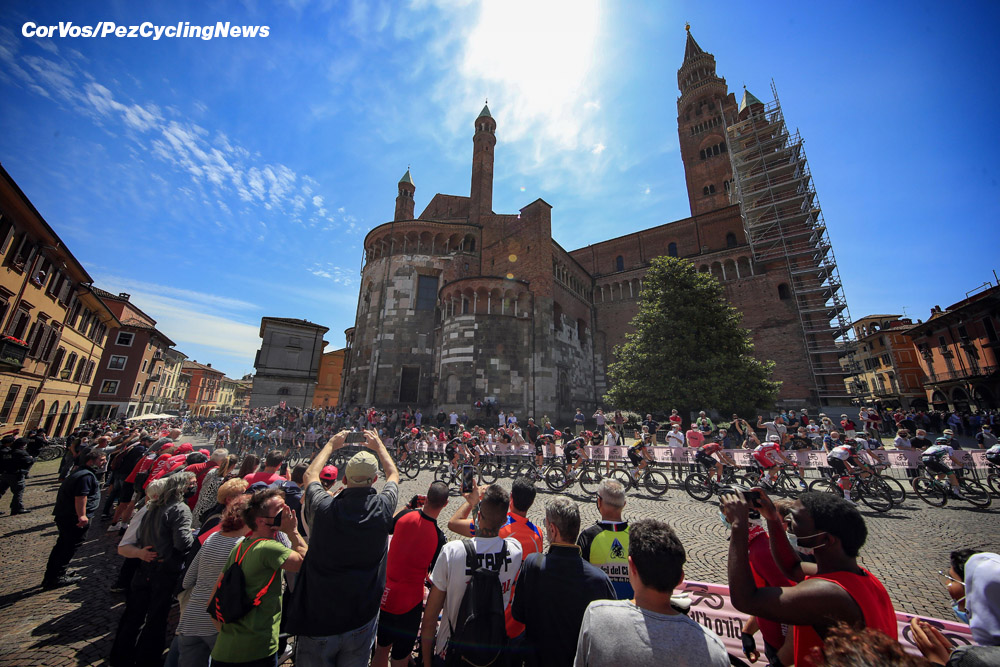 Steady ride for the peloton

The French time trialist took a gap and in the second group no one was willing to chase, which allowed Cavagna to continue to take more time. Cavagna’s lead kept getting bigger and so Bettiol had to do something when it got to 20 seconds. The strong Italian tried to catch Cavagna with Roche, but they were stuck at about 20 seconds. 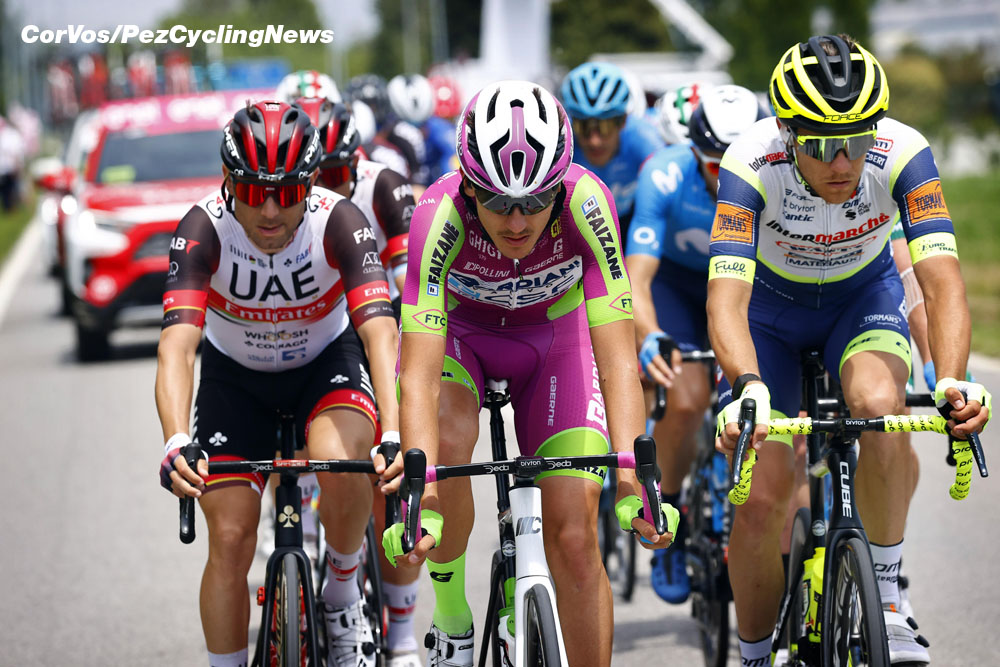 The break took 20 minutes on the peloton

After the technical descent from Castana, Cavagna was still in the lead and managed to extend it even further in the following kilometres. He pushed his lead to more than 30 seconds, but the Frenchman still had to survive two short climbs to the finish. Bettiol knew that, and so the EF Education-Nippo rider kept up the pressure behind Cavagna on the penultimate climb. 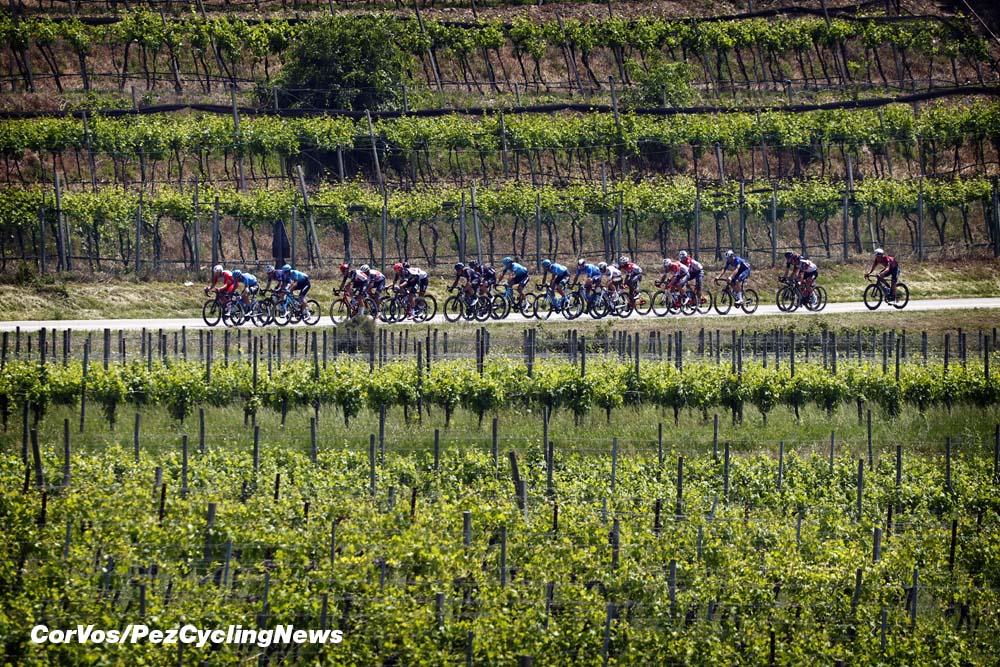 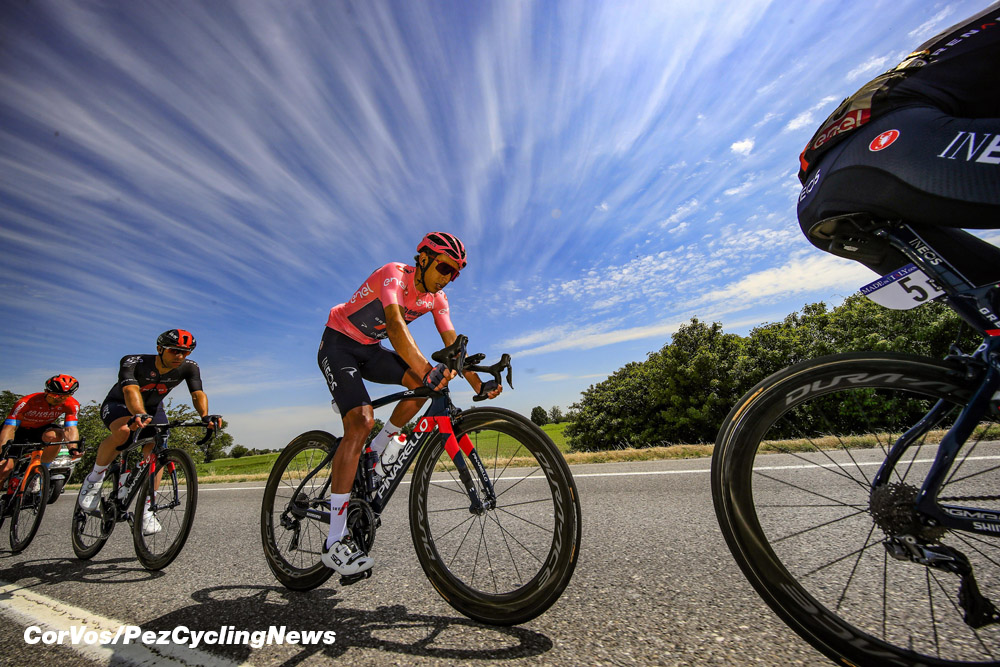 Bettiol managed to cut Cavagna’s lead to 15 seconds, but the Frenchman refused to give in and dug deeper into his reserves. Bettiol caught his breath again, as he was rejoined by Roche and so Cavagna started with a limited lead on the last climb. This slope summited about 5.5 kilometres from the finish. 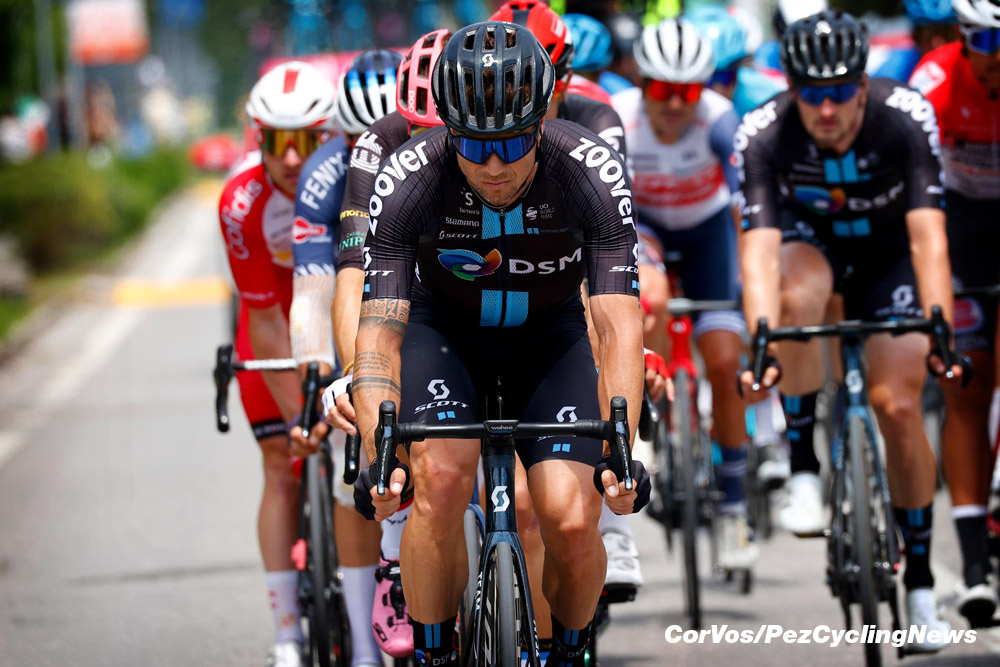 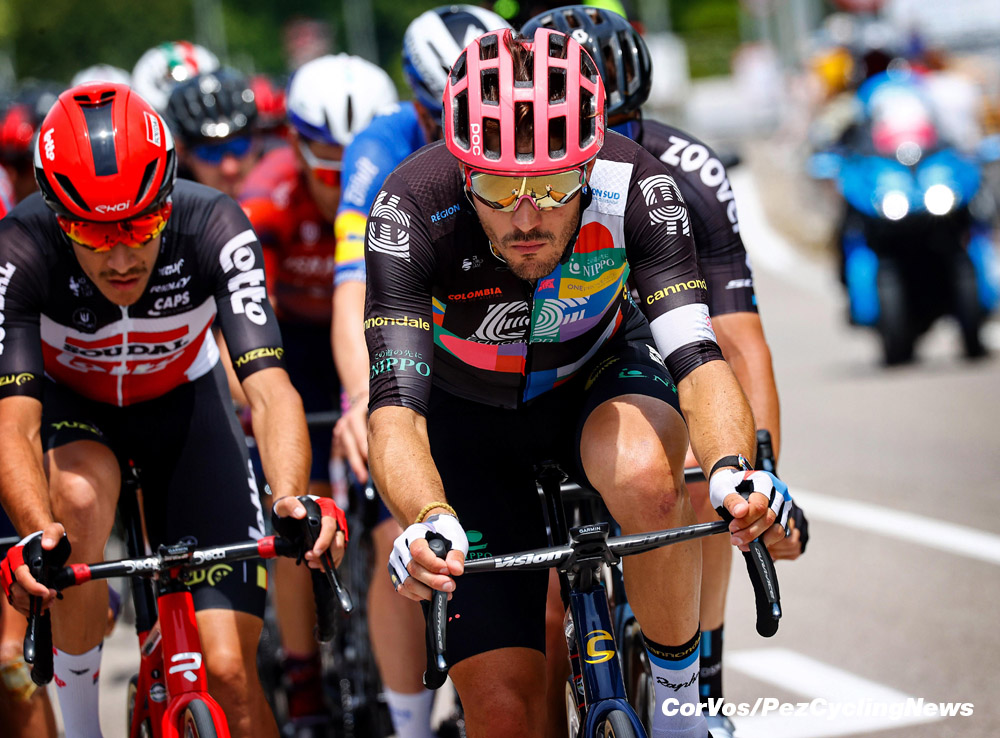 Bettiol was the strongman of the break

On the Caneto Pavese (2.6 km at 5.7%), Roche was dropped by Bettiol and the Italian bridged the gap to Cavagna on the climb. The Deceuninck – Quick-Step rider managed to hold the Italian, but there was a second attack from Bettiol. Cavagna came to a complete stop and the Italian took flight for good. In the last hundreds metres Bettiol was able to celebrate his first stage victory in the Giro d’Italia. Simone Consonni sprinted to second place, ahead of Roche. The peloton crossed the line 20 minutes later. Egan Bernal kept the pink jersey without any problems. 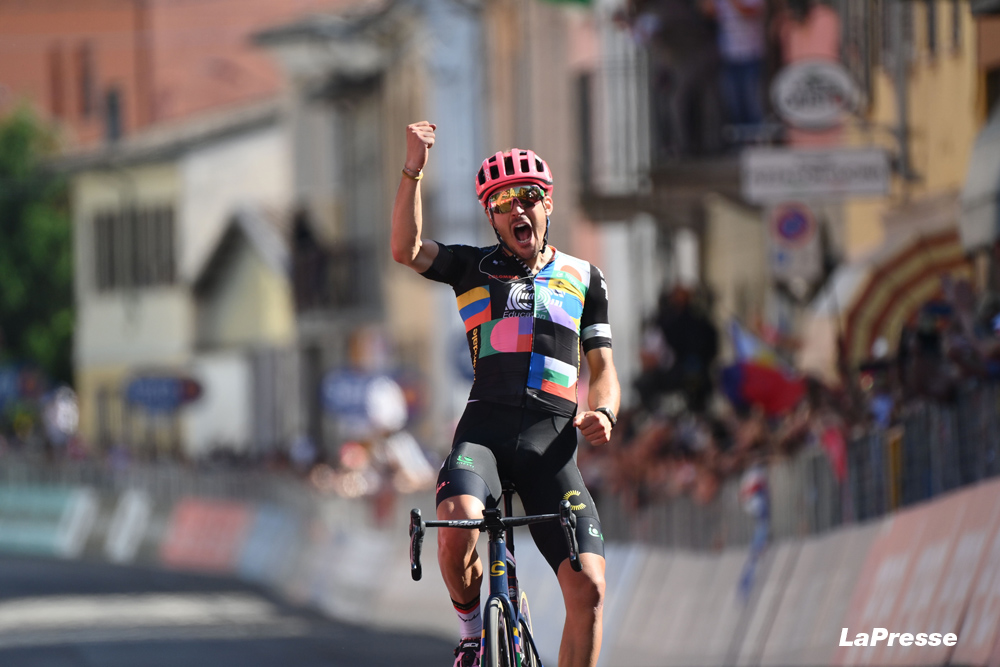 Stage winner Alberto Bettiol (EF Education First-Nippo): “I really wanted a victory like this! I had already come close on a couple of occasions. This morning my captain Hugh Carthy gave me the green light to go on the attack, I want to thank him and the whole team. I didn’t want to miss this opportunity, it’s always difficult to get into the breakaway in the third week of the Giro, many riders wanted to try to win today. In the finale, so many guys were looking at me and looking for my wheel. I was sure that Cavagna would try something. Luckily I caught him and attacked him immediately. I tried to hit him mentally and it paid off. Now I’m really happy with this success, it means a lot to me, I want to dedicate it to my former manager who passed away last year, Mauro Battaglini.”

Overall leader, Egan Bernal (INEOS Grenadiers): “I hope I’ve recovered well, I felt much better than yesterday on the bike and I hope tomorrow will be another good day. Today was really fast at times, but I was in the wheels so it was a bit easier behind all the time. I am trying to do my best, you can’t be overconfident because yesterday and in the past we’ve seen that with just one day you can lose everything. I have a lot of respect for the other guys, I need to be focused and try to do my best and that’s it.”

Why So Many People Enjoy Cycling as a Way of Exercising