Giro Stage Report: Tom Dumoulin showed he’s more than just a pretty face with a powerful ride up the steep slopes to Oropa, first pulling back a dangerous attack from Nairo Quintana, attacking himself to win the stage and increase his gc lead.

On a day when the climbers were supposed to attack big Dutch chronoman Tom Dumoulin (Sunweb) and the maglia rosa would battle to limit his losses, it was the 26 year-old from Maastricht putting time into all of his rivals, winning the stage, the winner’s time bonus and landing a huge psychological blow on every one of his rivals up to the Oropa Sanctuary. 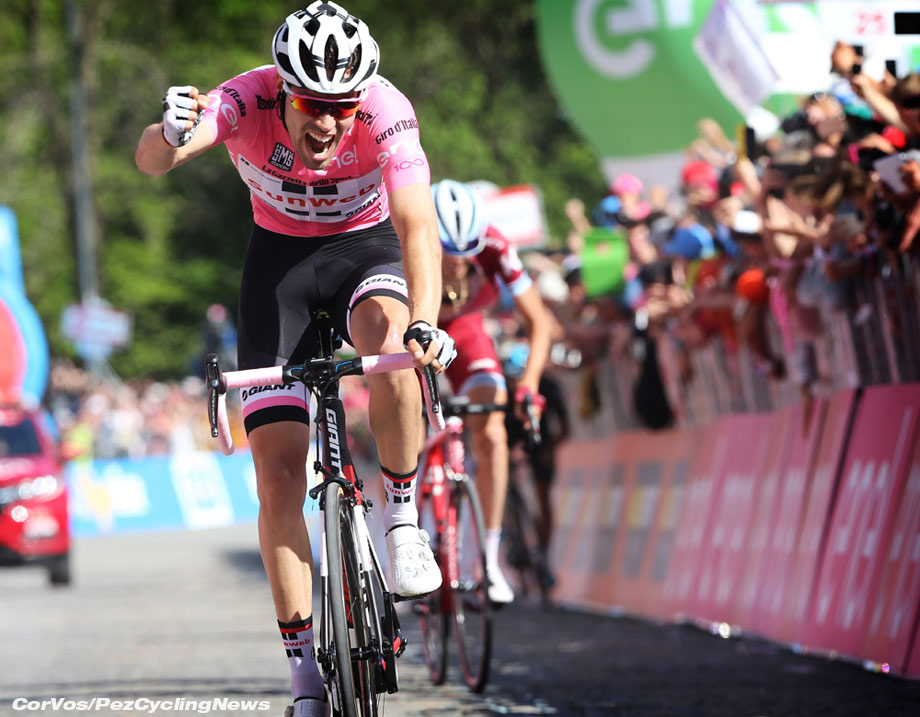 There was no panic from him when Nairo Quintana (Movistar & Colombia) attacked and looked to be on the way to victory just a relentless grind back up to his rival then a display of huge strength inside the last kilometre to make everyone else look ordinary. 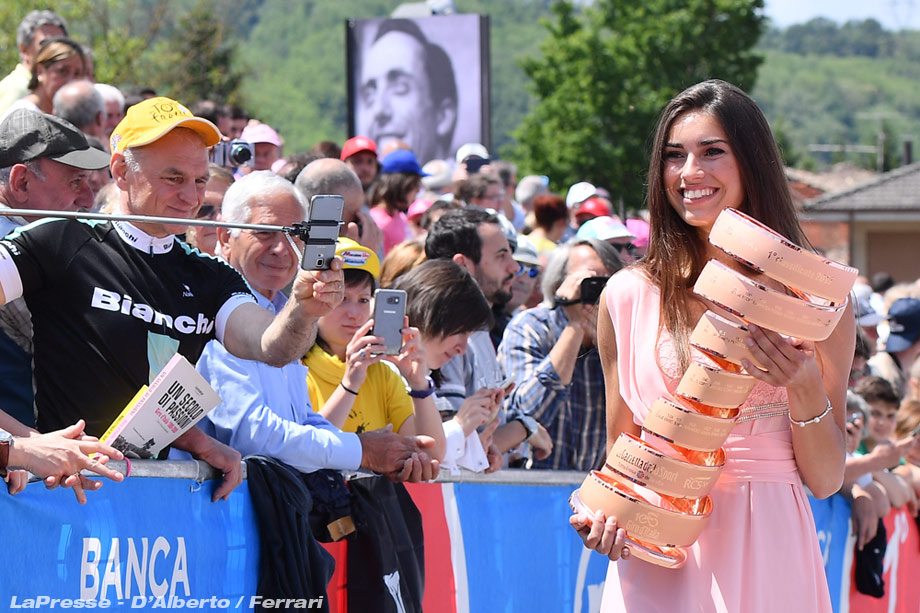 Quintana, Nibali (Bahrain & Italy), Zakarin (Katusha & Russia), Pinot (FDJ & France) all lost time – and some, Like Mollema (Trek & The Netherlands) were badly savaged by the Dutchman. 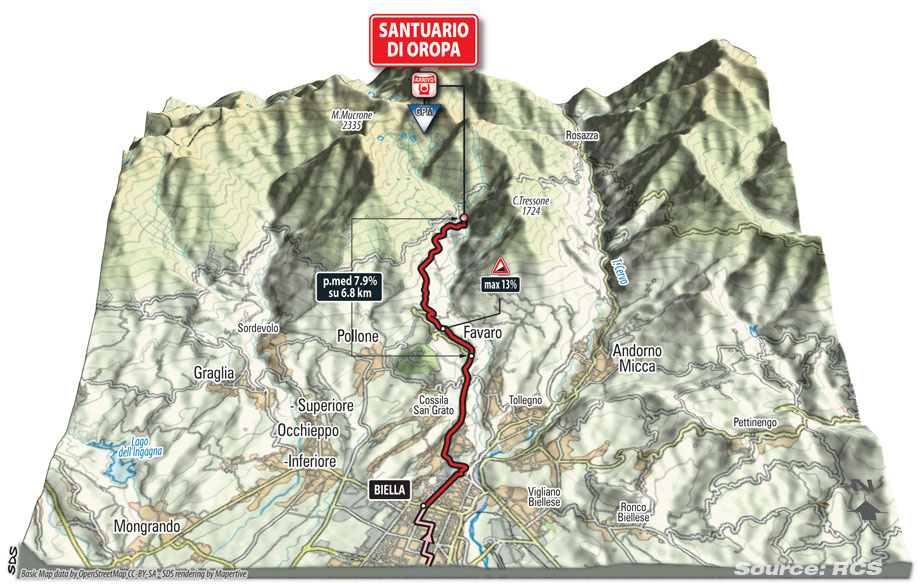 The organisation defined the stage thus:
Stage 14 – Castellania – Oropa (Biella) – 131km – total elevation 1,100 m
‘This stage is very short (the shortest of the race) and clearly divided into two parts: the route is fast-running and perfectly flat for 120km, across the Po Valley; then comes an 11km climb, with gradients over 7% and peaks topping out at 13% a few kilometres before the finish.

Oropa will be this year’s Montagna Pantani.

After leaving Castellania, the route covers an 8km transfer towards the actual start, then cuts across Vercelli and the surrounding plain. The final 11km stretch, climbing all the way to the sanctuary, begins just past Biella.’ 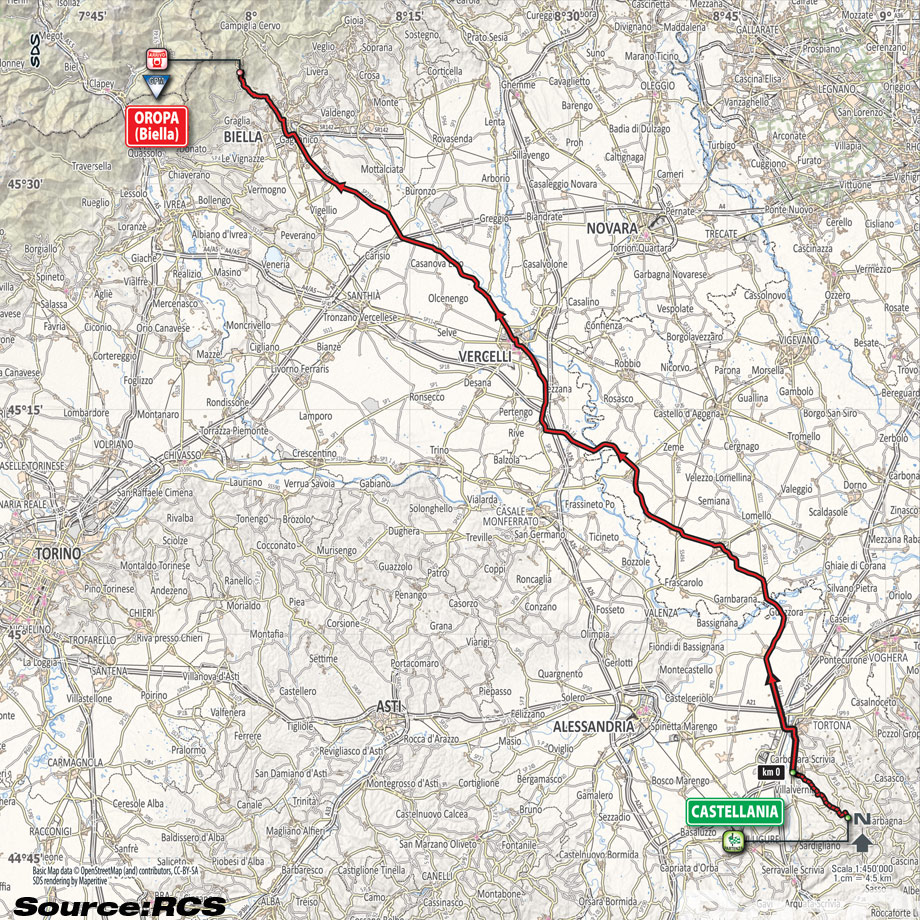 Castellania is of course the birthplace of the late Campionissimmo, Fausto Coppi. And Oropa is the scene of the late Marco Pantani’s ‘great’ climbing ‘exploit’ in 1999 to win the stage (I’ll say no more about that). 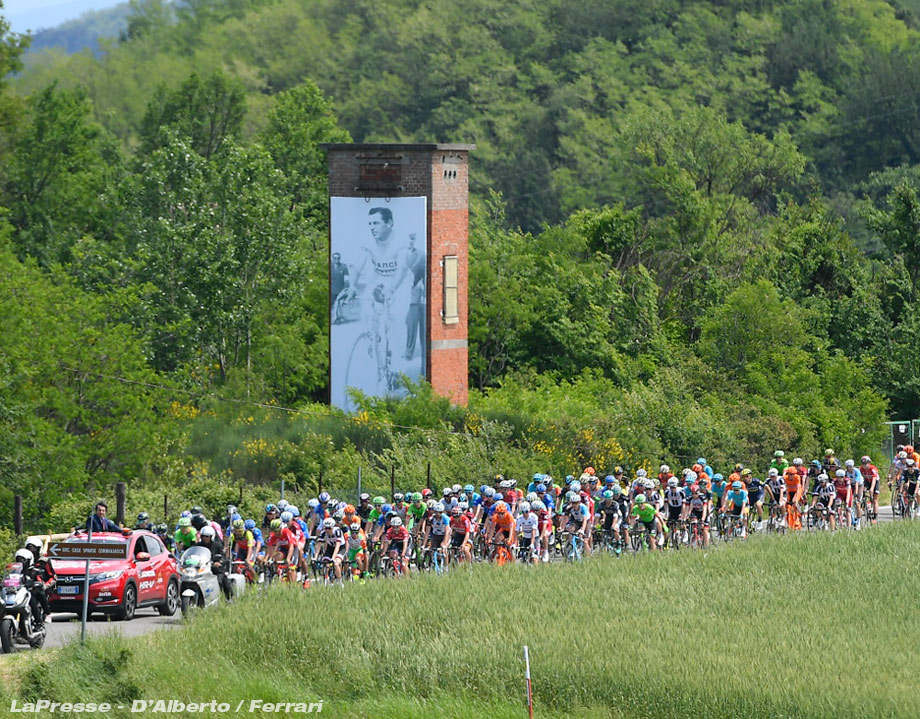 The attacks went from the gun, the usual suspects; Wilier, Bardiani but also with Lotto prominent – but not Andrei Greipel (Lotto Soudal) or Wilier’s Jakub Mareczko both are having breakfast with the family today. Garmins were reading 54 kph plus in the first 20 K making it hard to get a break to ‘stick.’

It was 100 k to go that the three wise men; Natnael Berhane (Dimension Data & Eritrea), Daniel Martinez (Wilier & Colombia) and Sergey Lagutin (Rusvelo & Russia) were allowed to slide away.

But FDJ decided not to let the upstarts get any big ideas; tapping out a caretaker rhythm at the head of the peloton across the rice fields of the Po Valley. Caleb Ewan (Orica & Australia) leads the peloton through the sprint at half distance behind the Three Musketeers who spell through, two minutes ahead. 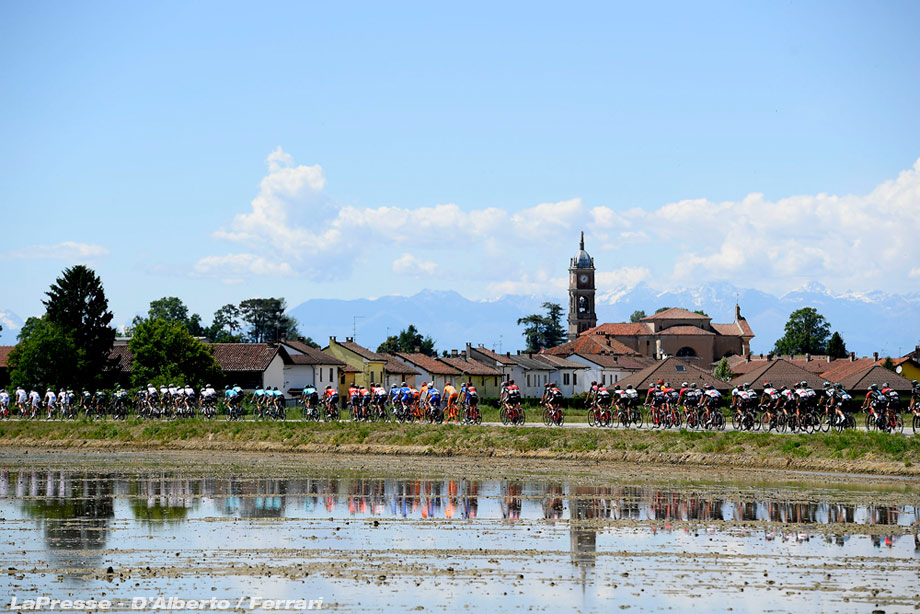 Behind the little Aussie sprinter in neat line astern are FDJ then Movistar – Pinot and Yates (GB & Orica)) must be looking to claw some time back today but it’s hard to see big Dumoulin losing time – it’s a strong man’s climb.

The second intermediate sprint at Vercelli (54 K to go) and again the break just ride through with the gap well inside two minutes, ‘there’ll be no last kilometre catch’ this day.

And on the subject of sprints, Gaviria’s four stage wins on his Giro debut puts him on a par with Belgian Ace. Roger De Vlaeminck, who did the same – now all the Colombian has to do is win all five Monuments, like ‘Le Gitane’…

Ewan keeps tapping at the front of the peloton with FDJ and Movistar in close proximity; and now FDJ come through as the riders reflect in the paddy fields – it could be the Tour of Vietnam. 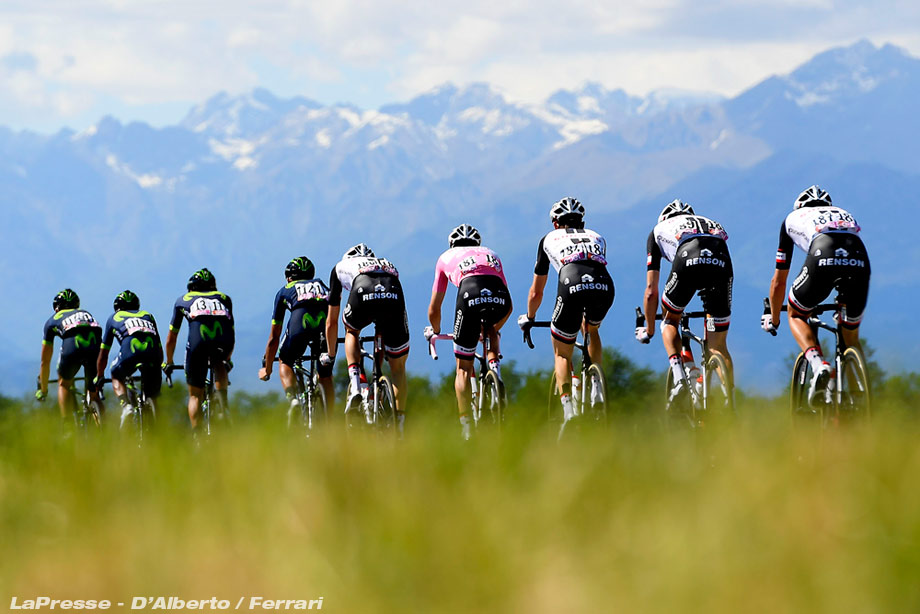 Dumoulin looks cool in pink; this is his 10th day in that lovely jersey – just 67 to go to catch up with Eddy Merckx and 50th equal in terms of days in the lead. But Belgium is only second in terms of days in pink; 158 to Italy’s 1168 – Big Tom accounts for 10 of his nation’s 31 days in the lead. Ewan is back on point – Australia has 23 days in pink, in case you wondered.

With 34 K to go the lead is inside the minute but still the three desperados tap out the rhythm – that TV coverage is worth big bucks.
The peloton eases; 32 K to go – Mollema appears, Pinot has been there all day, as has Quintana.

Adam Yates is smiling – it could be a day for him, once you give that skinny body of his a handful of seconds they’re tough to recover. That’s 25 K to go and the peloton is obviously hanging back from catching the break; the bunch is gutter to gutter and the gap 49 seconds.

The catch comes just inside 18km and suddenly it’s a different race – with Trek dragging Mollema to the fore. Lotto Jumbo too for Kruijswijk; Nibali moves up and it’s a brawl out there for position hitting that final hill.

Landa is there for Sky but it’s Nibali looking friskiest and well positioned – can he move up from fifth overall? We’ll soon know.

And we’re on the start of the climb with Trek in charge now for Mollema over the cobbles. Adam Hansen (Lotto Soudal & Australia) goes down – hope that didn’t hurt too much, sir.

Kiryienka drives for Sky and it’s stretching way out; but he pops as Rojas takes it up for Movistar – but too fast, he goes clear and that’s not the plan. 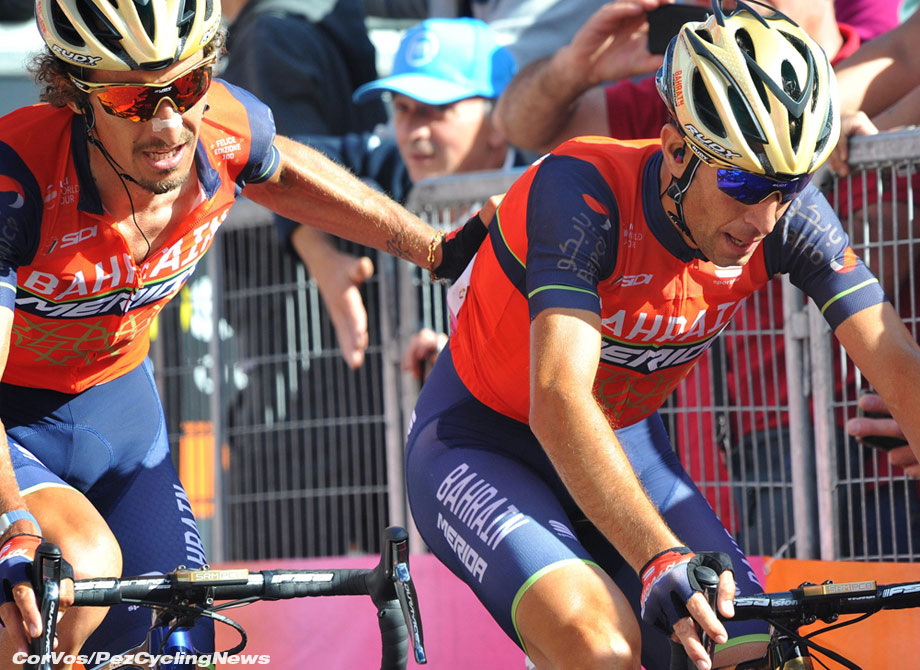 Franco Pellizotti showed his face at the front on the lower slopes, but was there when his leader Nibali needed support.

Rosa now for Sky, he’s a local man and looks very good as he keeps the gear down and spins those mahogany tanned legs sweetly. The climb will kick soon, that’s us inside eight km and Rosa is stretching his lead – 11 seconds, he’s in the big ring, middle of the cassette.

Movistar step it up a gear behind and Rosa is washed away, Pinot is still there as is Nibali as the grade kicks. The Telephone Team are in full torture mode, ripping it to shreds – Anacona turning the screw.

Igor Anton (Dimension Data & Spain) tries hard but it doesn’t look like he’s getting the gap he needs – nope, Zakarin (Katusha & Russia) snuffs him out. Yates is there, Kruiswijk, Pellizotti (Bahrain & Italy) – as Anacona drives it again with 4.6 K still to ride.

Yates is in a big gear and he goes; but Pozzovivo (AG2R & Italy) counters – Landa is there but it’s Quintana and Zakarin piling it on as Pinot slides backwards. No panic from Dumoulin though, he rides at his own pace – Quintana punches again, Zakarin pops but big Dumoulin is cool, calm and collected. 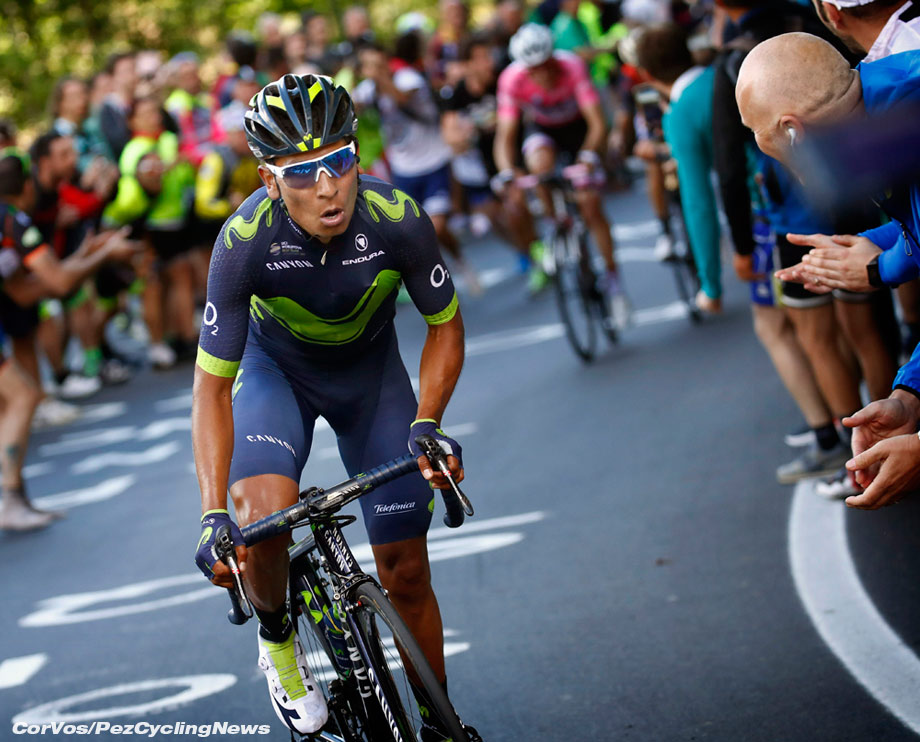 Quintana is ahead solo with Dumoulin driving his way back up, Nibali on his wheel – Zakarin has hopped aboard, Yates is there, Landa.
But Pinot, Pozzovivo and Kruijswijk are all damaged.

Dumoulin is impressive – big, strong, remorseless in pursuit -and he attacks as soon as he makes the catch. Only Zakarin, Quintana and Landa can hold the big Dutchman – Yates has gone, Nibali too. 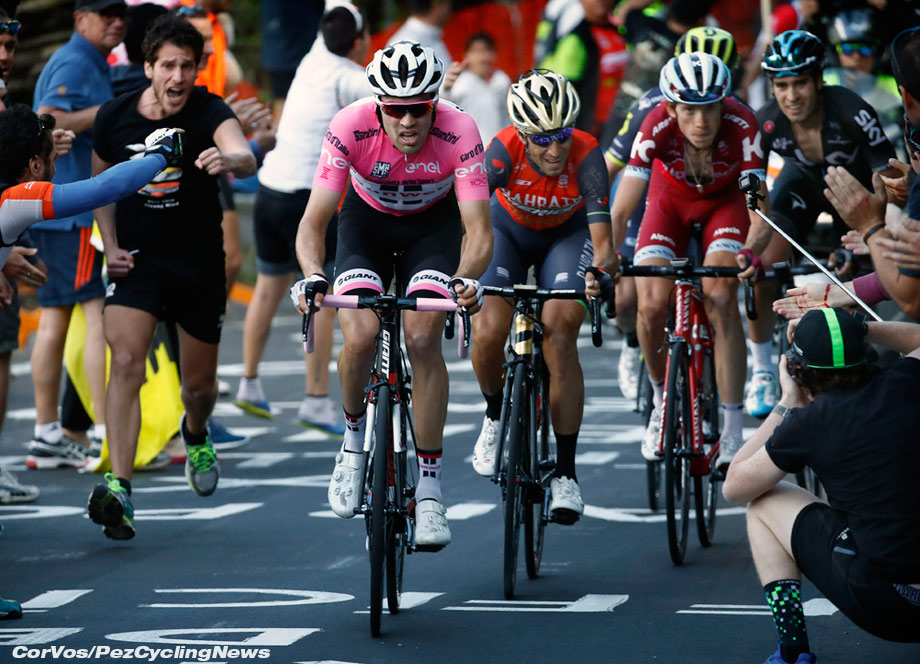 On the cobbles now, Zakarin attacks but Dumoulin matches him, the Russian cracks and it’s the maglia rosa who wins. A wonderful ride.

They’ve ALL lost time on him – what a ride. 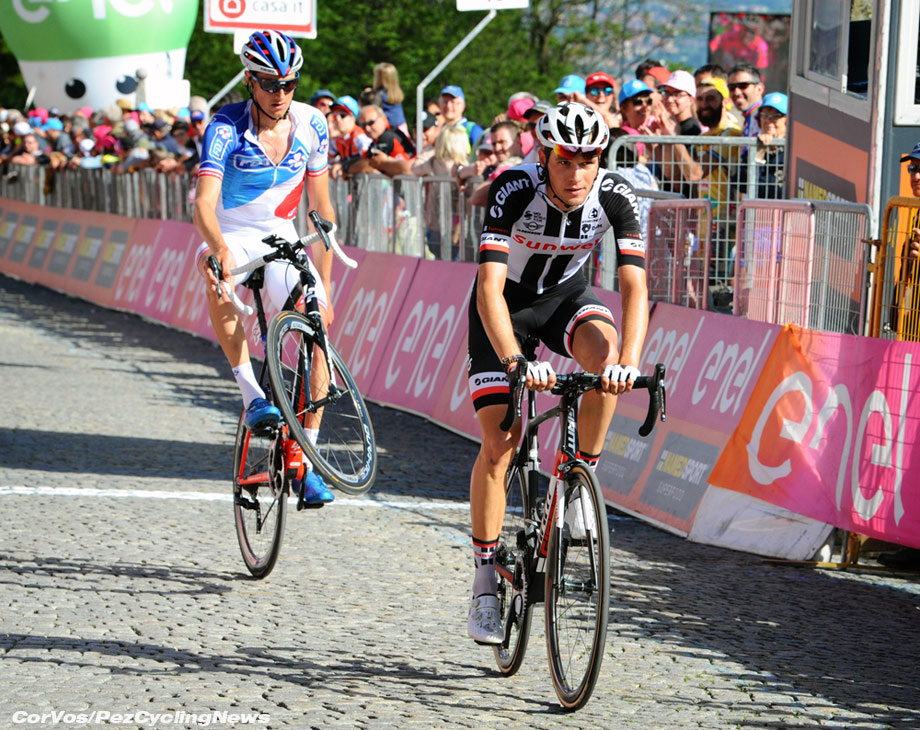 Tobias Ludvigson feels not too bad after that climb. It’s not all pain and suffering out there.

Speaking seconds after the stage finish, the stage winner and Maglia Rosa, Tom Dumoulin, said: “I knew Quintana would attack and I was dreaming of hitting back but I didn’t think this would happen. It was hard when Quintana rode away. I couldn’t follow him so I took my own pace. Then I came closer and closer. When Zakarin accelerated I only thought of gaining time on Nibali, Pinot and Mollema. I have a big advantage to take into the last week. We’ll see if it’s enough. This stage suited me but the last week will be different with a lot of climbing. We’re still far from Milan.”

There may still be a week to go but at this stage it looks like the big man from the Flatlands will take some prizing out of pink.