Giro Stage Report: Spain’s Gorka Izagirre of Team Movistar took Stage 8 of the Giro d’Italia in the seaside resort of Peschici after breaking away from the peloton nearly ninety kilometers from the finish and outlasting his fellow fugitives in a seesaw finale.  Quick Step’s Bob Jungels is still the race leader heading into tomorrow’s crucial mountain stage. 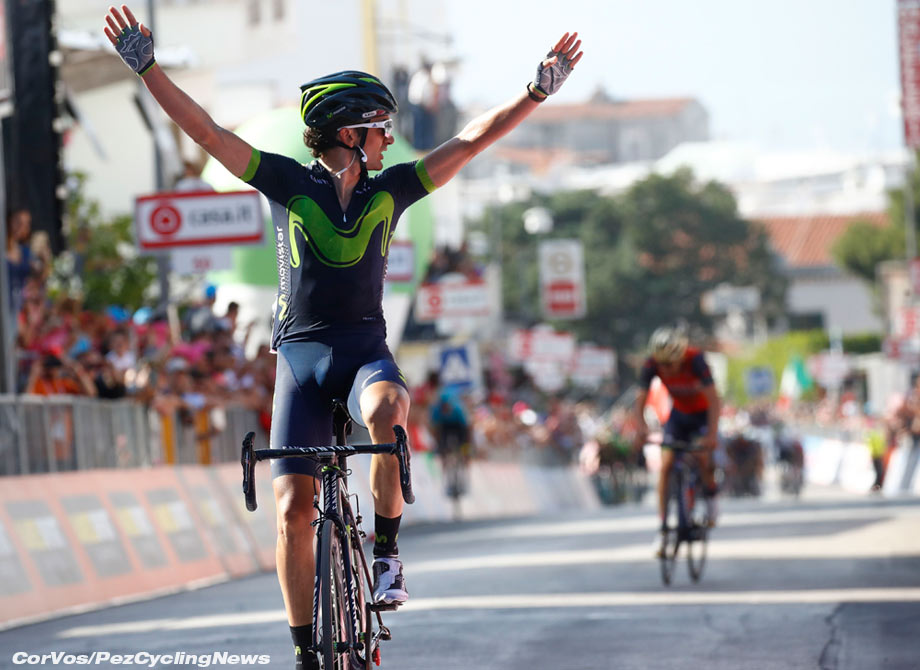 No stage victories, no distinctive jerseys…  At the start of the Giro d’Italia’s eighth stage, there was talk of “una crisi” for the home nation.  Rarely in the race’s history had the athletes of the Boot enjoyed so little success in the opening week of their national Grand Tour, and observant journalists could not help but notice the grey hairs multiplying on the head of Mauro Vegni, the race’s quinquagenarian director. 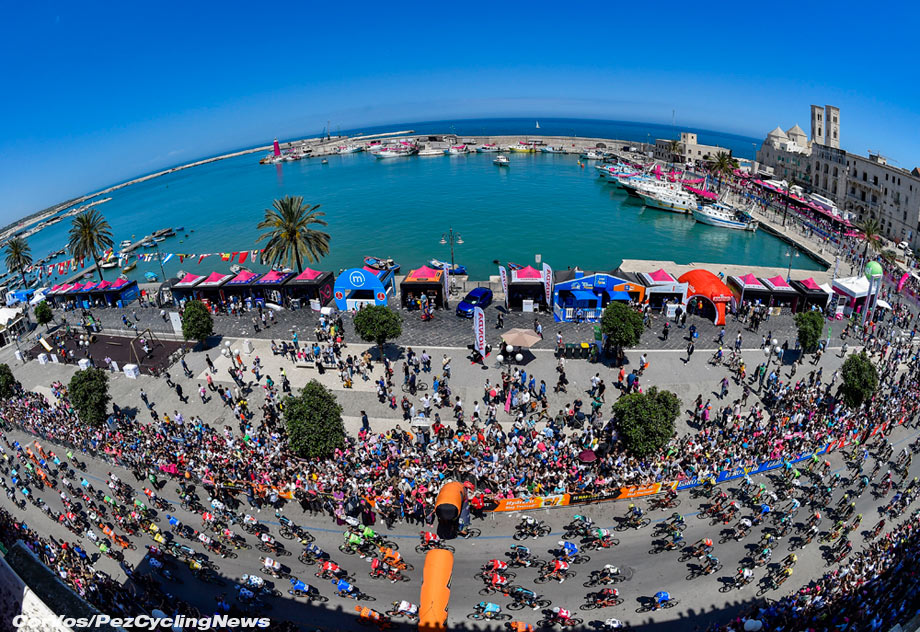 The start of another gorgeous day along the endless Italian coast – this time the Adriatic – enroute from Molfetta to Peschici 198 km north, and where the PEZ scored a rare rooftop vantage point when the race finished there in 2008.

Some sought excuses: “Nizzolo has a bad hip, Aru stayed home and Sky should have brought Viviani but didn’t”, lamented Maurizio Fondriest, a former World Champion now working as an ambassador for the Corsa Rosa.  “What’s more, many of our most talented Italian riders are underachieving because they have been confined to the role of gregari in foreign teams”, he continued, sounding increasingly bitter.  However one chose to look at it, last week’s results made the golden age of Fausto Coppi and Gino Bartali seem a long, long time ago.

The tifosi looked to Stage 8, from Molfetta to Peschici, in the hope that one of their compatriots would finally raise his arms, preferably in the manner of double stage winner Fernando Gaviria rather than that of Luka Pibernik, the ‘victor’ of the penultimate lap into Messina. 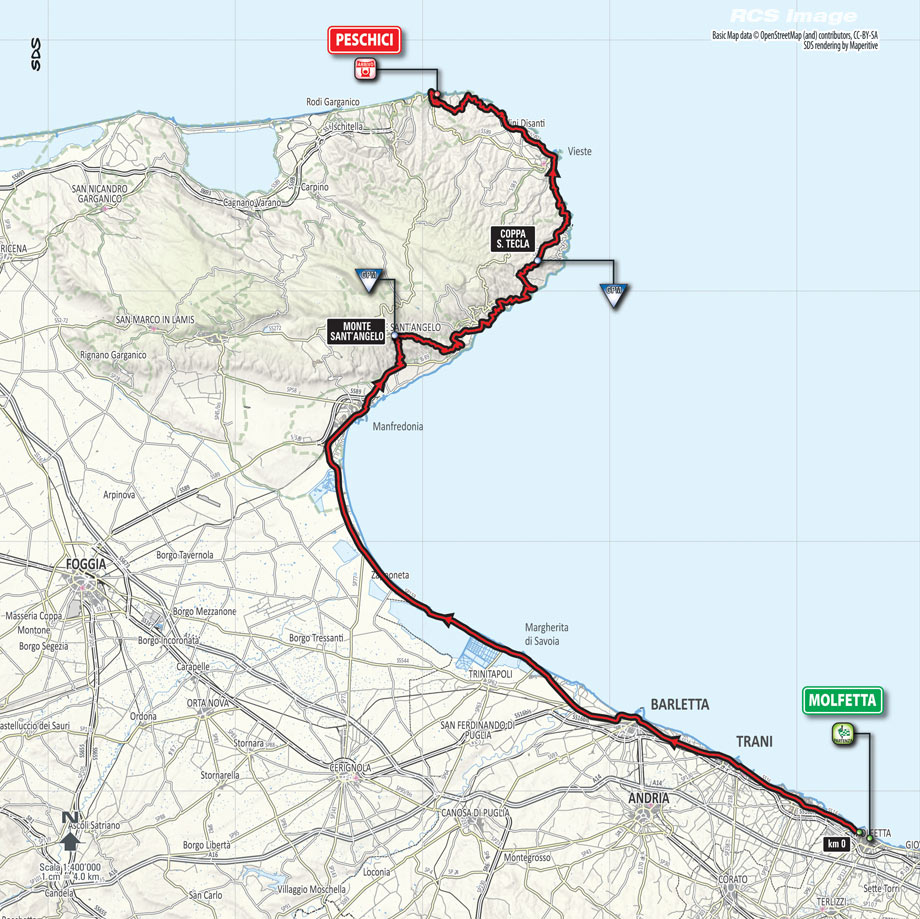 The day’s course, described by La Gazzetta dello Sport as “un percorso da classica”, appeared likely to reward the escape artists.  It boasted a total length of 189 kilometers up the Apulian coast, the first half flat and rectilinear but the second hilly and tortuous, including several categorized and uncategorized climbs.  Above all, a steep 1,500-meter rise to the finish looked more than enough to discourage the sprinters’ teams from chasing.  Had Diego Ulissi, the brilliant baroudeur from Tuscany, been present on the roads of the Giro, today’s ride would have fitted ‘Il Pendolino’ like a glove. 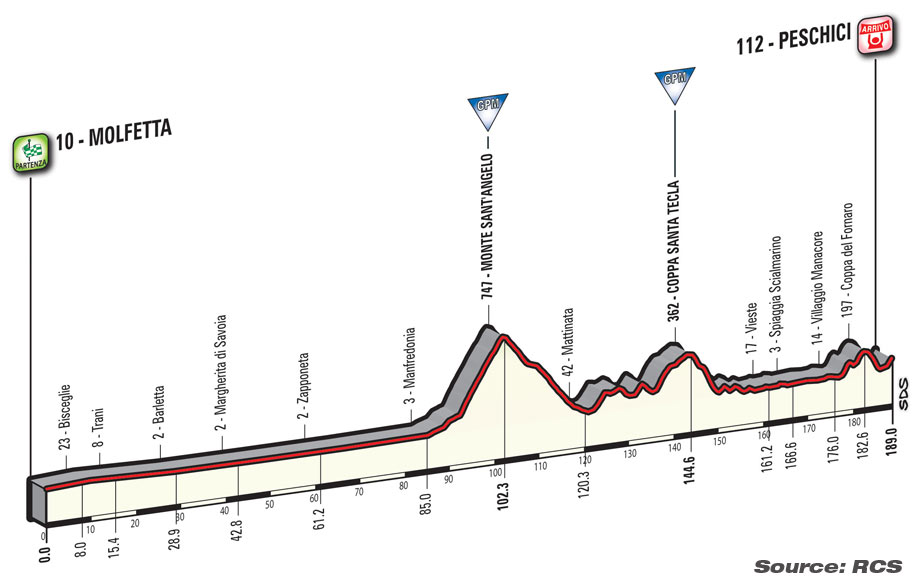 Dials on the speedometers of the race’s accompanying vehicles indicated figures in excess of fifty during a very nervous opening hour of racing, as one rider after another attempted to ping off the front of the pack.   Countless initiatives were foiled by the peloton as the race sped past the salt ponds of the Gargano peninsula but after fifty kilometers, on the outskirts of Margherita di Savoia, a large group of thirteen men succeeded in breaking away. 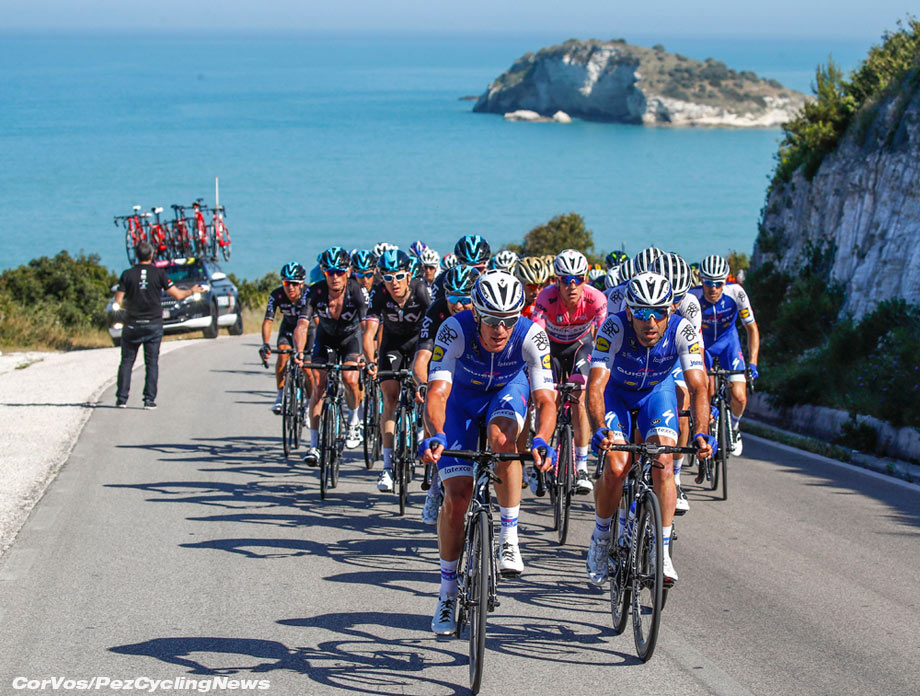 Its chances of success, however, looked limited given the intimidating presence in its midst of no less than three members of the Bora-Hansgrohe squad, including the former wearer of the Maglia Rosa Lukas Pöstlberger.  More importantly, Sánchez, an expert escapee with a string of Tour de France stage victories to his name, looked every bit the bogeyman, and to make matters worse Keisse, a deputy of race leader Bob Jungels, refused to work in the paceline.

Developments at the front of the peloton further contributed to the breakaway’s misery.  The Wilier Triestina team rode relentlessly against the wind, a punishment inflicted on the Italians by their sporting director Angelo Citracca for failing to feature among the fugitives, and the Gazprom-RusVelo riders soon suffered the same fate at the hands of their Russian manager Renat Khamidulin, ensuring that the gap between the two groups barely surpassed two minutes.

As the leaders approached the foot of the day’s first obstacle, a category-two climb to Monte Sant’Angelo placed 88 kilometers from the finish presenting a length of 9.6 kilometers and an average gradient of 6.1%, their advantage had dipped below the minute mark.  Concerned by the proximity of the peloton, Samoilau put the pedal to the metal and dropped most of his companions but Sánchez held on to his wheel and responded with an acceleration of his own, escaping alone through the cactuses of the Italian south and isolating himself at the head of the race. 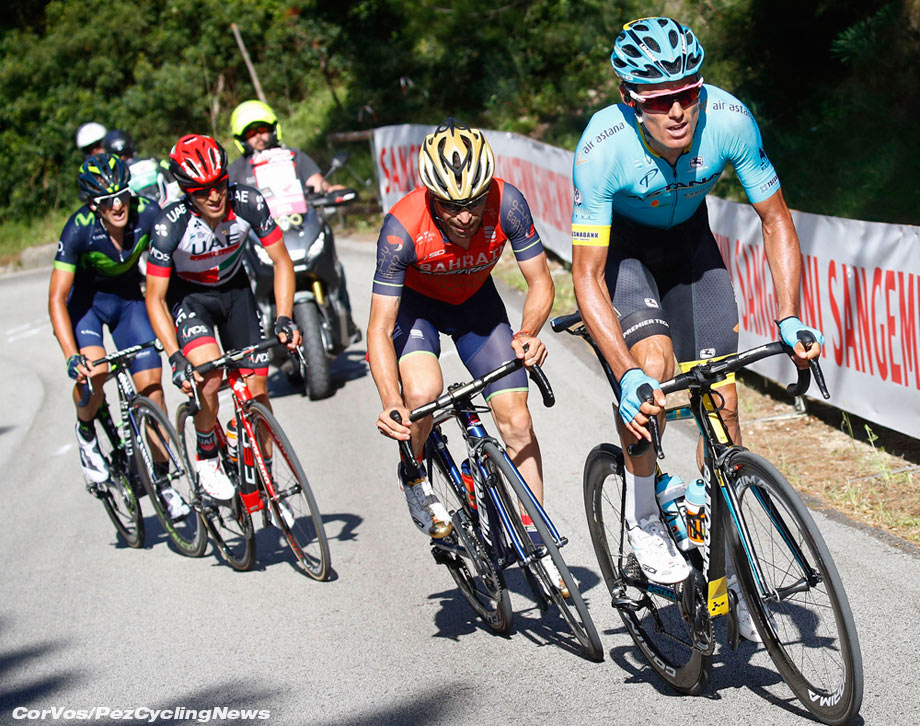 King Conti
Giovanni Visconti (Bahrain-Merida) cannonballed out of the peloton before the summit and joined forces with the remains of the échappée matinale in order to chase down the Spaniard.  Others, such as Gorka Izagirre (Movistar), Davide Villella (Cannondale-Drapac), Clément Chevrier (AG2R La Mondiale), Ivan Rovny (Gazprom-RusVelo), Enrico Barbin (Bardiani-CSF) and Valerio Conti (UAE Team Emirates), followed Visconti’s example and tagged along.   Seeing no purpose in continuing by himself through the parched countryside, Sánchez slowed down to wait for his pursuers.

In no time, the junction had taken place.  Unfortunately, the leaders could not build a substantial enough time advantage over the main pack due to the threat posed by Conti in the General Classification and the atmosphere among them became acrimonious as they entered the finale along the scenic Adriatic coast.   Conti, the race leader on the road, barked out orders in an effort to marshal the breakaway but behind, the blue train of Quick Step ate into their advantage, dashing the young Italian’s hopes of pulling on pink. 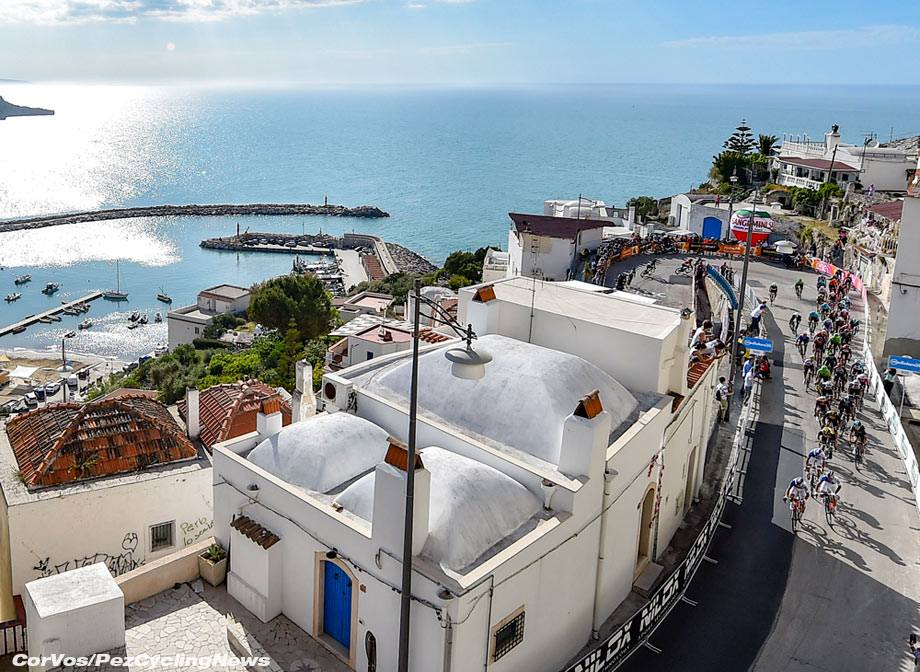 Frustrated, five men broke free of the lead group to try to improve their chances.  Conti, Visconti, Izagirre, Sánchez, and Gregor Mühlberger (Bora-Hansgrohe) worked together to put daylight between themselves and their erstwhile accomplices, before turning on one another, lured by the glory of a stage victory.  Visconti, Conti, and Sánchez all pulled the trigger but after a series of permutations at the front – Mühlberger alone was missing.

Sky’s Basque bruiser Mikel Landa, one of the race’s outsiders, burst out of the peloton with nine kilometers remaining, setting off alarm bells.  Quintana’s Movistar team and Pinot’s FDJ formation toiled away to catch him and soon succeeded. 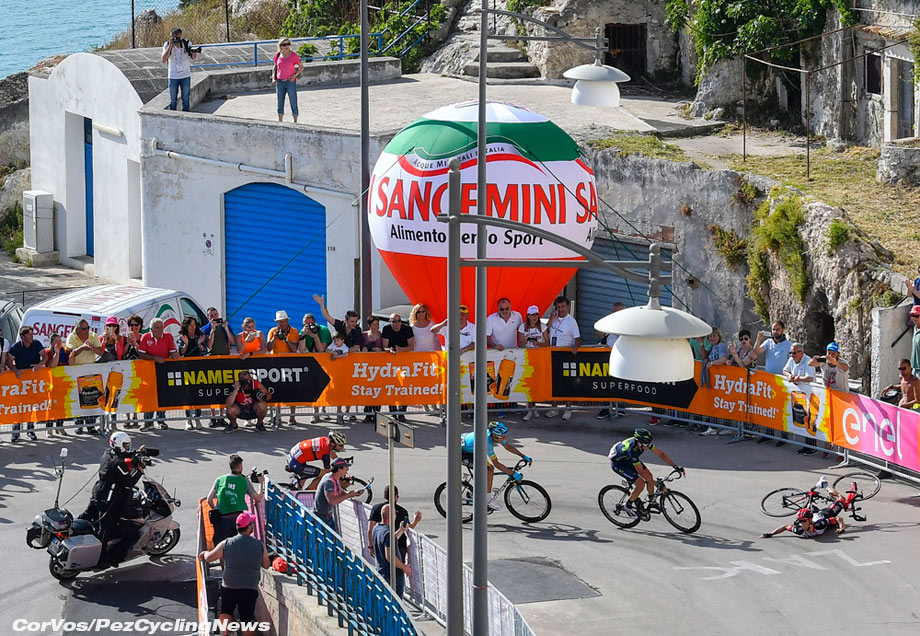 Meanwhile events went from worse to worst for Conti, who after losing his grip on the Maglia Rosa crashed at the entrance of the climb to the finish line, jettisoning his chances of winning the stage.  Izagirre immediately capitalized on the Italian’s mistake, powering forward at full tilt and shaking off Sánchez.  Visconti, carrying the hopes of a country on his shoulders, sought to make a late comeback but the Spaniard proved beyond his reach and after one last glance behind him could celebrate his amazing achievement. 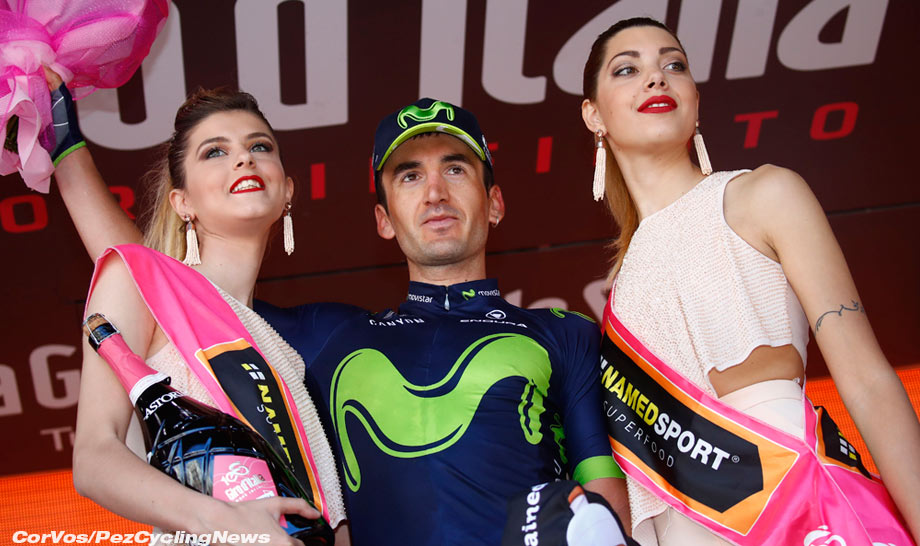 See you at the Blockhaus
Despite a minor crash, Luxembourg’s Bob Jungels stays in pink after finishing in the peloton with all of his rivals.  Most of the race favorites are still grouped together in a tightly poised General Classification, a mere ten seconds adrift. 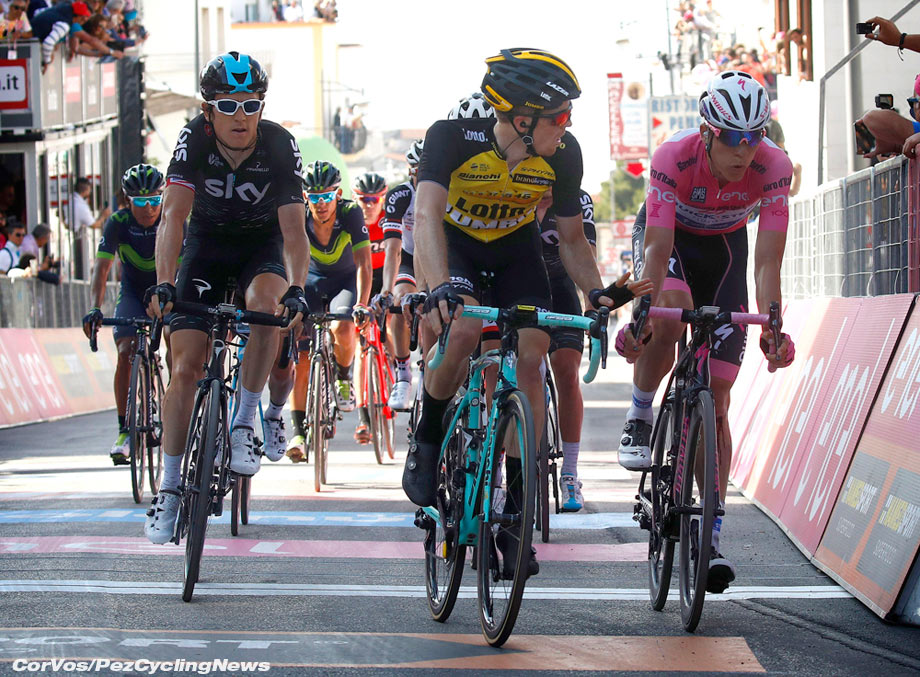 All eyes will now turn to the Apennines and to tomorrow’s terrible test, the ascent of the Blockhaus.  Spectators gathered at the Giro’s second mountain-top finish should witness the first big battle of this year’s race, as the leading pretenders stake their claims to the Maglia Rosa.