On the strength of an impressive display of teamwork, Greg Daniel of the Axeon Hagens Berman Cycling Team rode into the overall lead of the Tour de Beauce Thursday on the only summit finish of the five-day race.

The reigning U.S. national road champion donned the leader’s yellow jersey after the 169 kilometer race to the Observatoire du Mont Mégantic, the highest point in Québec that is accessible by road. Daniel finished 12th on the day, 73 seconds after stage winner Sepp Kuss (Rally Cycling).

“The entire day, I had teammates with me and helping me,” Daniel said. “I am very grateful for that.” 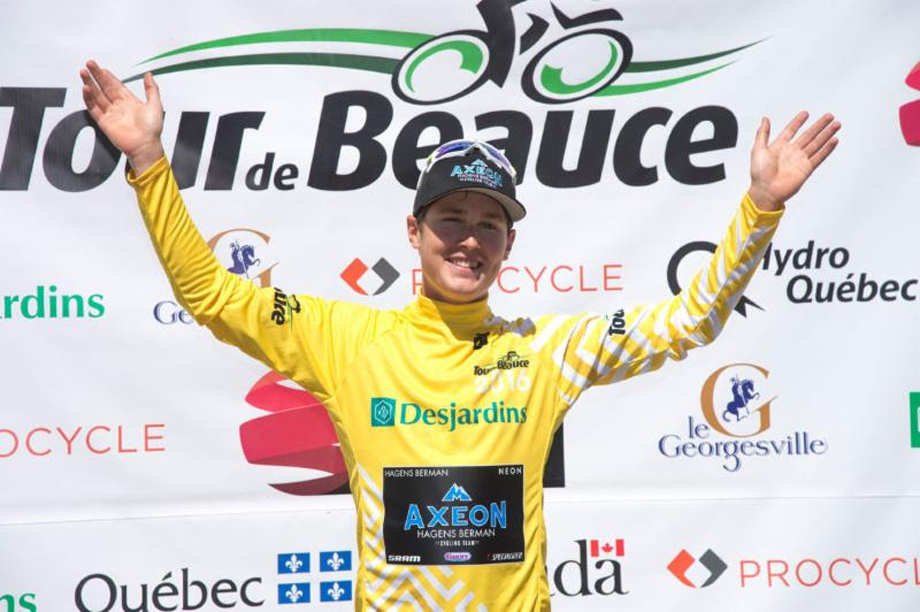 Aggressive riding by all seven Axeon Hagens Berman riders throughout the day meant the front group was never without one of the American team’s distinctive blue, black and white jerseys.

“We had Logan Owen in the first move, but it was a relatively large group for just one of us to be there,” Axeon Hagens Berman Sport Director Jeff Louder said. “So a bit later, Geoffrey Curran, Neilson Powless and Greg bridged to it – along with the yellow jersey and a few others – and that was the selection for the day. It was impressive to have so many guys there. But it also put the onus on us to do a large part of the work.”

The gap between the breakaway riders and the pursuit was not a big one as several major teams that missed the move – Jelly Belly presented by Maxxis, the Lupus Racing Team and Silber Pro Cycling – worked hard to bring it back. By the time the peloton reached the base of the last climb, fewer than 25 riders remained.

“I am really pleased with how our guys rode,” Louder said. “It was a heads-up move by Geoffrey to get Greg and Neilson up the road to join Logan. Then, once the writing was on the wall and they saw that they needed to go all-in for Greg, there was no hesitation.”

Will Barta put the finishing touches on the impressive display of teamwork by pacing Daniel all the way up the five-kilometer climb to the finish that averaged 12 percent grade. Barta went on to finish 11th himself.

“When we were coming into the climb, Greg was about 30 seconds in front of the reduced peloton after being in the break all day,” Barta said. “Once I got to him, I tried to ride a steady tempo so that we could hopefully get him the yellow jersey and it ended up working out.”

Friday is a double-stage day, with a 19.4 km individual time trial in the morning, followed by a 78 km race comprising four laps of a lumpy circuit. Saturday is a 70 km criterium, followed by a 122.4 km circuit race Sunday through the streets of Ville de Saint-Georges.

Daniel said he is looking forward to the challenge of hanging onto the overall lead.

“I know if I have a good day, I can do a good time trial,” the 21-year-old from Sylva, North Carolina, said. “Hopefully, there won’t be too many changes in the overall standings. I think the team is strong enough that if I have the lead after the time trial, we can hold it for the rest of the weekend.”

Louder agreed with that assessment, noting that the team’s Specialized Shiv time trial bikes could prove to be the difference.

“This time trial should favor aerodynamics and focus,” he said. “The course is dead straight, so there won’t be much to think about but to ride as fast as possible. Having Greg in yellow is amazing. Now it will be up to him to defend the jersey against the clock. If that goes well, I know the boys will give it everything to keep the lead in the remaining three stages.” 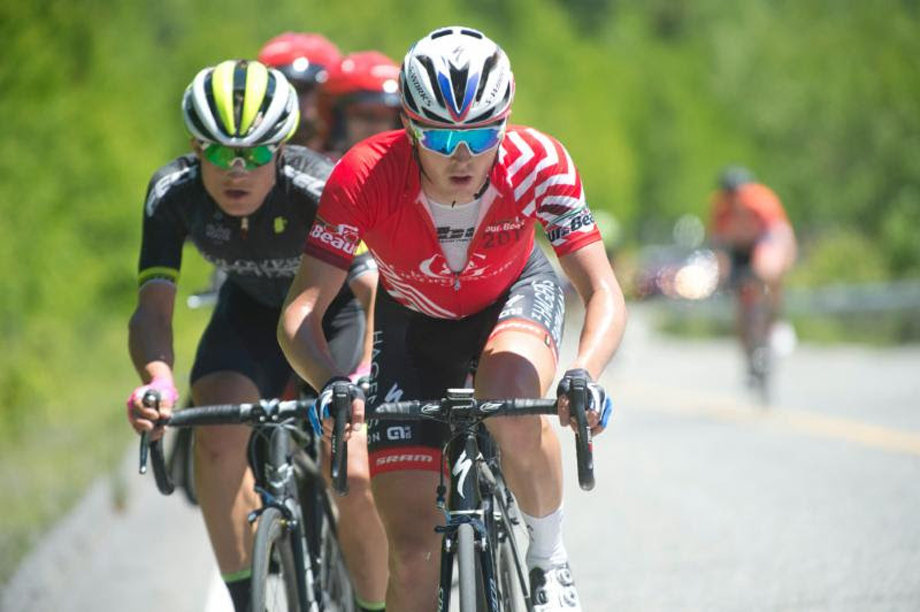 Daniel wore the “best young rider” jersey on Thursday’s stage. He kept the lead in that classification and now also leads the points standings. (Photo ©Casey B. Gibson.)