In the freezing cold of East Flanders the mighty OmegaPharma-Quickstep team were upset today by some questionable team tactics and a wily Italian.

Where The Race Was Won
This was the race that Classics fans from around the world had waited a long winter for and with 26kms to go and the peloton seemingly out of contention a group of 10 were approaching the end of the race when Quickstep’s Stijn Vandenbergh put the hammer down and pulled Katusha’s Luca Paolini with him. 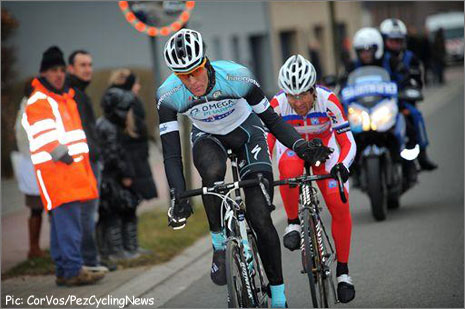 “Come and do some work Luca”

The move was one of strength by Vandenbergh who was simply oozing power all day long and one of team numbers with Quickstep being the only team with two in the front move, Sylvain Chavanel could then sit in. For Paolini things couldn’t of been better as Vandenbergh was seemingly happy to do three times as much work on the front as he and the gap to the 8 chasers quickly grew. Then come sprint time Paolini had a huge edge over the non-sprinter Vandenbergh so the result was seemingly written as soon as the duo’s gap climbed to more than 30 seconds.
How It All Began
On the startline in Ghent 198 riders were greeted by freezing cold late Februray weather in Belgium and to top it off, a blisteringly cold arctic wind. With seemingly every item of team clothing being worn by the peloton, the gun was given and the peloton got away to a very fast start with the first hour being raced at 46km/h as the early break tried to form.

The nine riders worked their advantage to a maximum of five minutes before the hills, the cobbles, the terrible weather and the ever increasing speed of the peloton took their toll with the gap dropping at a steady rate.

By the time the race reached the famous Taaienberg climb, the group was splintering and the gap was just over a minute to the peloton. The group at the front wasn’t the only group splintering though with the peloton splitting into three parts on the Taaienberg. The main peloton just behind the early break was about 40 riders strong as the race hit the Eikenberg climb and it looked like the break was just about finished for the day as this small but strong peloton rapidly closed down the gap.
Chavanel Makes His Move
With numbers on hand in the front peloton but nobody in the break, Sylvain Chavanel (Omega Pharma-Quickstep) made his move attacking the peloton just after the Eikenberg taking Marco Bandiera (IAM) with him for company. Chavanel didn’t need him though as he did all the work and easily crossed the gap to the breakaway demonstrating to one and all that he was on a great day.

One and all that is except his teammate Stijn Vandenbergh who a few kilometers later inexplicably attacked the peloton and dragged a very dangerous group clear that included pre race favorites, Greg Van Avermaet (BMC), Geraint Thomas (Sky) & Jurgen Roelandts (Lotto-Belisol) plus Maarten Wynants (Blanco), Sven Vandousselaere (Topsport Vlaanderen-Baloise), Egoitz Garcia Etxegibel (Cofidis) and the aforementioned Luca Paolini (Katusha) – despite the fact that his teammate Chavanel was up the road.

In fact when Vandenbergh made his move, Chavanel had already dispatched all of the remaining riders from the early breakaway plus Bandiera and was attempting to ride 38km solo to win the race. He looked like he had the form to do it too, quickly building a good gap but he had to sit up after his teammate’s led group started charging up to him.

With the early breakway riders dropping back and Chavanel being picked up by Vandenbergh’s group this now led to 10 riders out the front which soon led to 8 after Vandenbergh’s attack which Luca Paolini was wise enough and strong enough to follow.

As the duo’s gap rose, the result was seemingly written more than 15kms from the line as with no cobbles remaining nor bergs to make the difference Paolini the sprinter was set to record his first win since 2009 and his biggest win since his 2006 stage win in the Vuelta Espana.

Paolini then made no mistakes in the sprint, easily dispatching Vandenbergh to second place and meaning that once again Patrick Lefevre’s Quickstep team made a mess of the opening Classic’s weekend in Belgium. 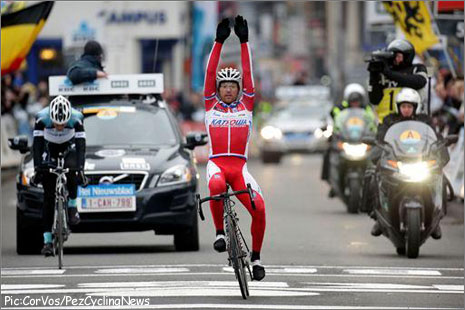 Back in the chasing group Topsport’s Sven Vandousselaere beat Geraint Thomas for the last spot on the podium to make a great result for the small Belgian squad with big pre-race favorite Van Avermaet settling for 5th. 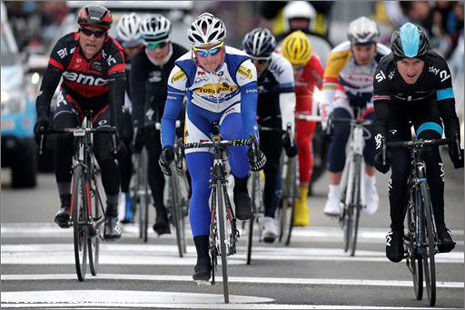 Inside The Copenhagen Six!