Race Preview: This Saturday will be the 73rd edition (or 70th depending upon whether you count the three cancelled editions) of what most would agree is the start of the ‘real’ season, the Omloop Het Nieuwsblad, a race steeped in tradition and one which most Belgian riders would sacrifice body parts in order to win. 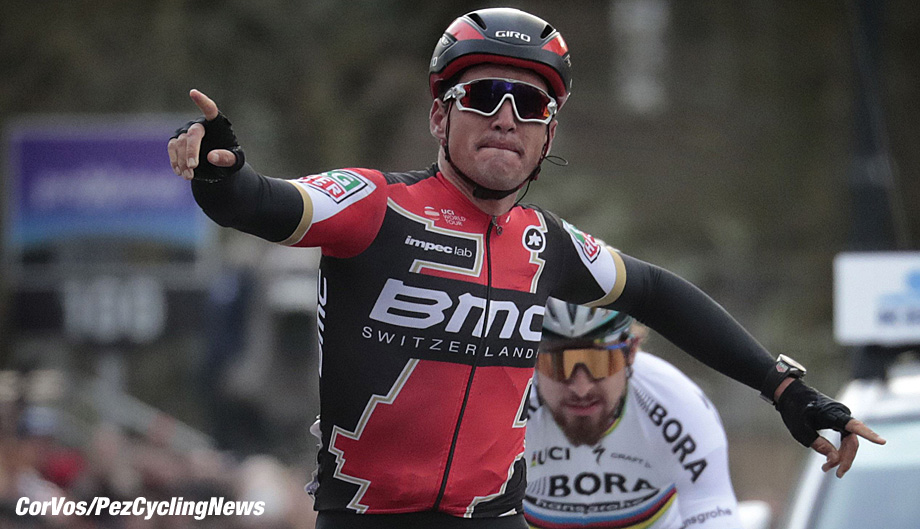 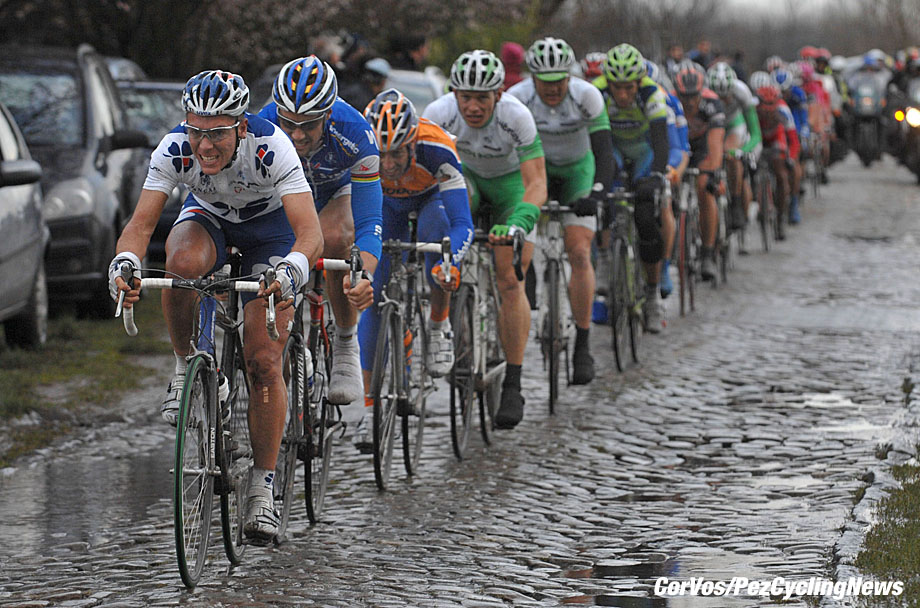 Not a race for wimps

My buddy and fluent Flemish speaker, Ivan, never refers to it as Het Volk, always Gent-Gent; but to old sad guys like me, it will always be Het Volk. However! With the new parcours – of which, more later, we may have to consider ‘Gent-Ninove?’ 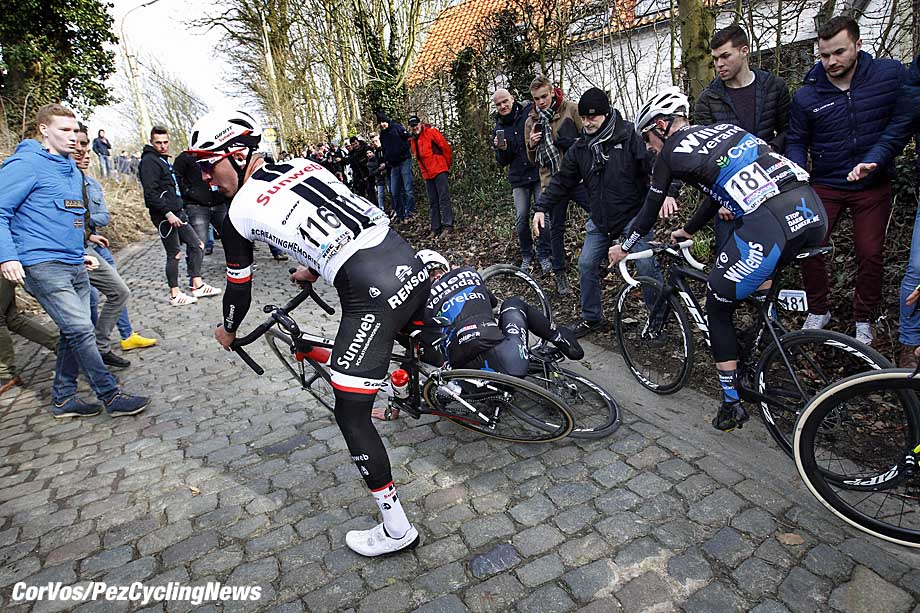 Previously known as a ‘semi-classic’ or a ‘mini Tour of Flanders,’ this year’s race is again on the World Tour roster – parcours will be 196 kilometres, as opposed to the somewhat more savage 266.5 kilometres of the ‘Ronde.’ Both races share many of the same climbs, or ‘hellingen’ in Flemish – Tenbosse, Berendries and Valkenburg are names you’ll find in both sets of parcours; albeit Het Volk has a mere 13 savage ascents, the Ronde has 18. 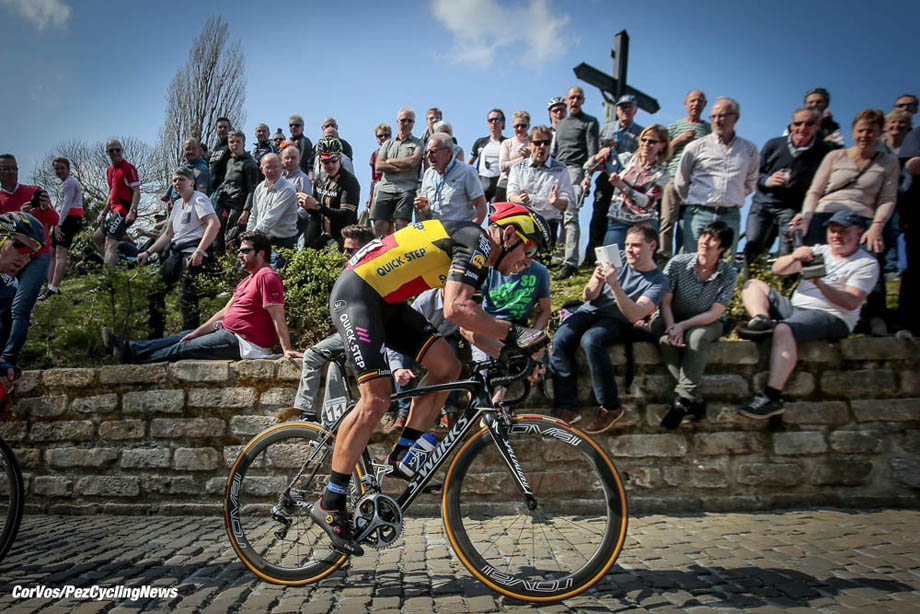 The legendary and savage Kapelmuur at Geraardsbergen is included too – mixed memories for me on that one, the last time I was there my laptop was stolen. Anyway. . . 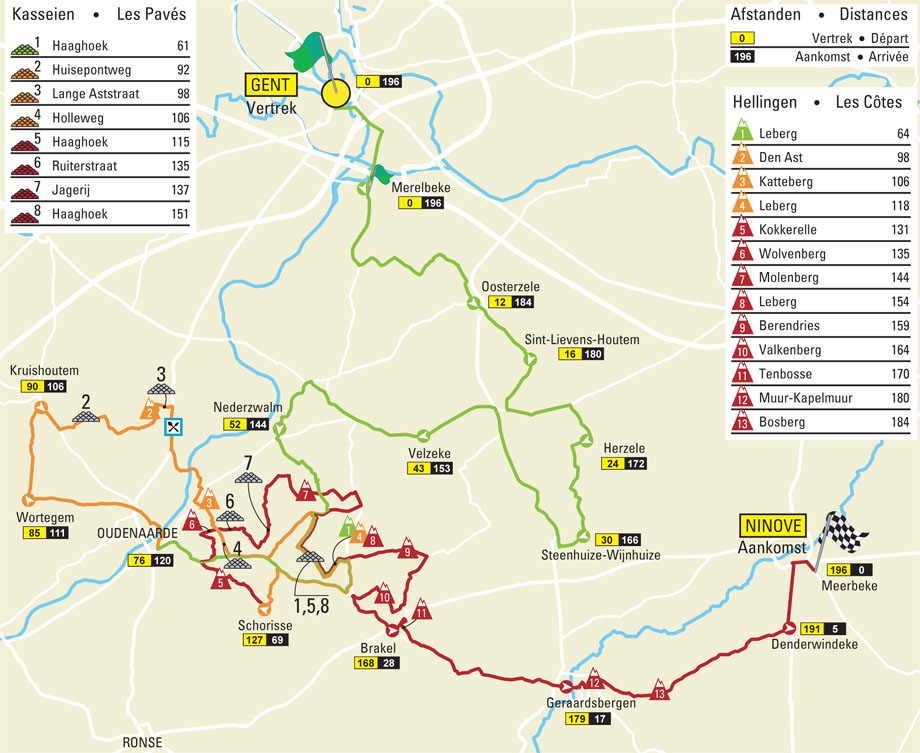 The big change this year is that the Kapelmuur comes at 170K then the Bosberg at 184K, just 12K from the finish in Ninove – a short enough distance for a strong man to ‘hang on.’

In Flemish, cobbles are ‘kasseien,’ another feature which it shares with the bigger race in April and which helps give these races their particular character. There are 10 sectors with the switchback Haaghoek tackled three times. Hills and cobbled stretches are tangibles; where they come is easy to write on a piece of tape and stick to the extension – what’s not so easy to plan for is the weather. 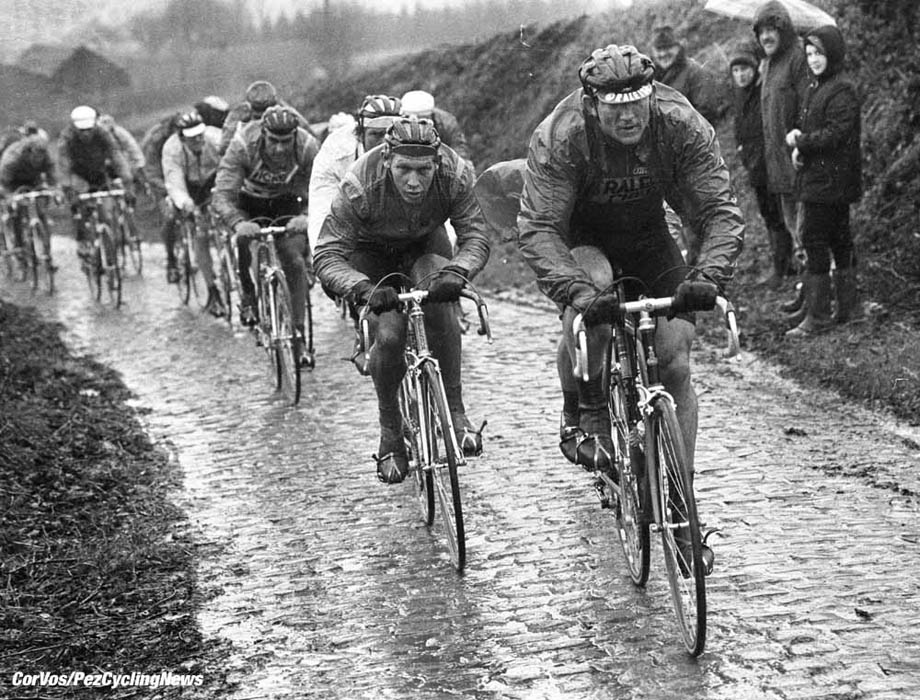 The weather can be the winner in Het Volk/Nieuwsblad

Twice in my life time, Het Volk has succumbed to snow, and if it’s wet, cold and windy then much of the field are beaten before they start; days where riders like Merckx and Museeuw would be rubbing their hands in anticipation. Both men won this race twice during their careers (’71 & ’73 and ’00 & ’03 respectively). 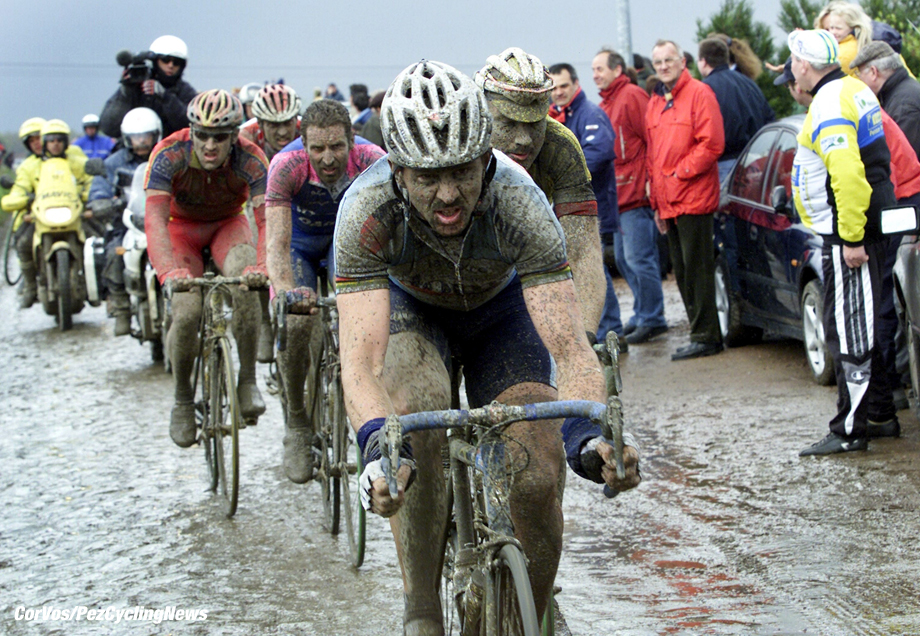 The joint ‘record men’ on three each are Ernest Sterckx ’52, ’53, ‘56; Eddy Merckx’s man mountain right hand man, Jos Bruyere ’74, ’75, ’80; and most recently, Peter Van Petegem ’97, ’98, ’02 – no surprise that all three are Belgian and renowned as hard as nails. If you take a look at one of those websites which has the national flag of the winner displayed beside his name, there’s a heck of a lot of red, yellow and black on display. 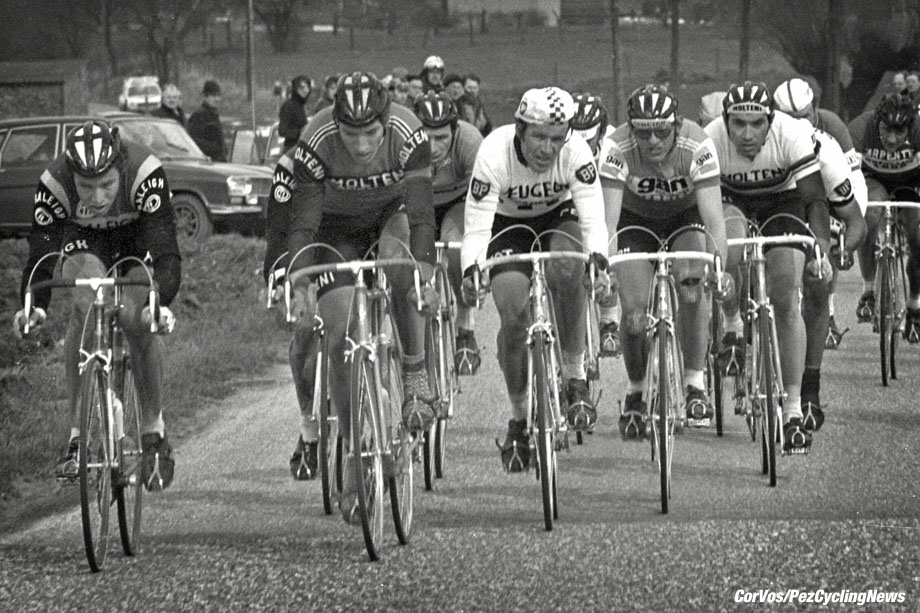 Of the 73 editions (including three cancelled) Belgians have won 56; in joint second are the Netherlands and Italy – on four each. Five other nations have won; Ireland, with the late, great Seamus Elliot in ’59; Germany with Andreas Kappes in ’90, exploiting his stellar early season form from the six day circuit; hard as nails Viking Thor Hushovd for Norway in 2009; that very rare bird, a Spanish ‘man of the cobbles’ Juan Antonio Flecha in 2010 and Great Britain’s beast of a man, Ian Stannard – twice, in 2014 and 2015. 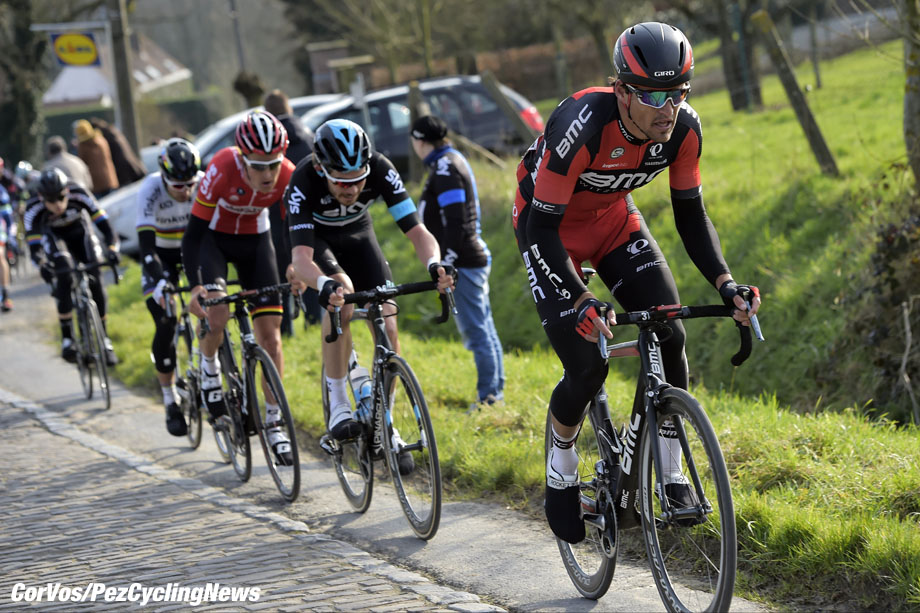 Generally the winner will be a hard, physical rider who has no problems in the positioning melee which precedes every climb. Occasionally if the wind isn’t too strong and there’s not too much rain or snow, then class can win out – take Filippo Pozzato’s (Liquigas) 2007 win as an example. Incidentally, my friend, mentor and commentator on all things Belgian cycling, Viktor has never fully recovered from Pozzato’s win, insisting that for a man as interested in his coiffure as the Italian to win is an affront to all the race stands for – he has a point but Pippo at his best was a class act. 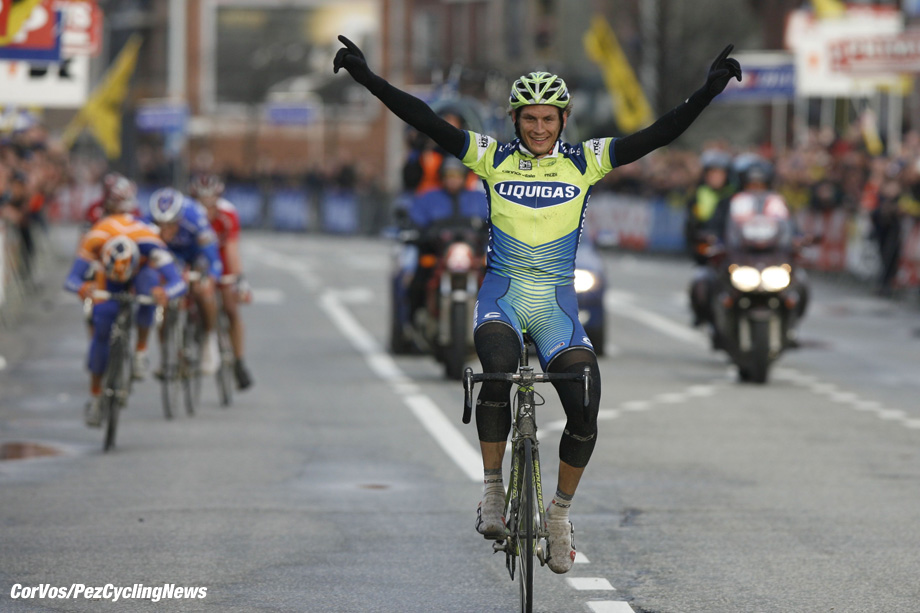 We cite five ‘super favourites’ and five who’s day it just could be:
Greg Van Avermaet (BMC & Belgium, 32 years-old) the reigning Olympic and Het Nieuwsblad champion is in good shape; a stage win and spell in the leader’s jersey in Oman tell us all we need to know. The winner for the last two years – three in a row? Sagan did it in the Worlds – but unfortunately Peter won’t be with us on Saturday. 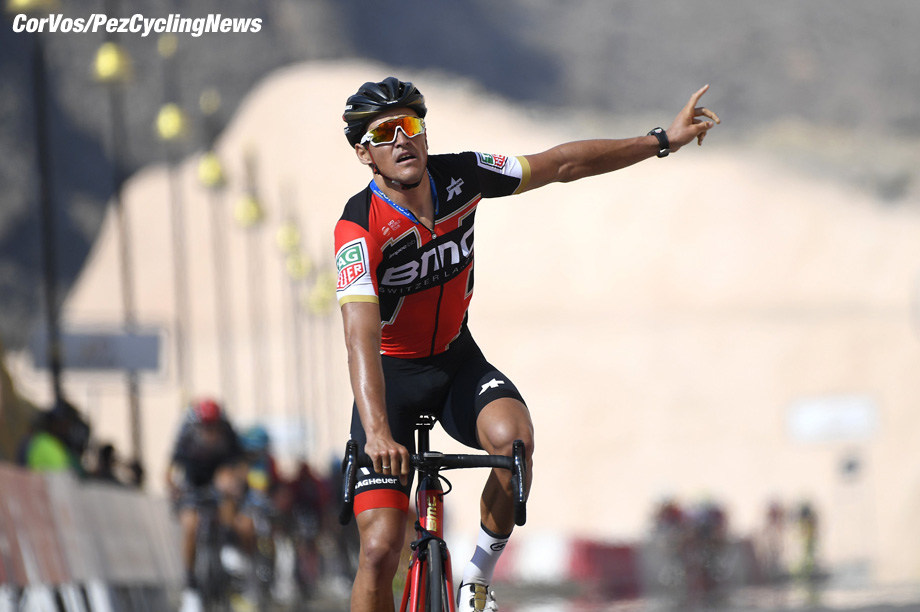 Philippe Gilbert (Quick-Step & Belgium, 35 years-old) has won here twice before when he was younger and sprightlier – he’s a huge diesel now; maybe it’s too short for him? But as an aggressive opportunist with the world’s finest classic team behind him. . . 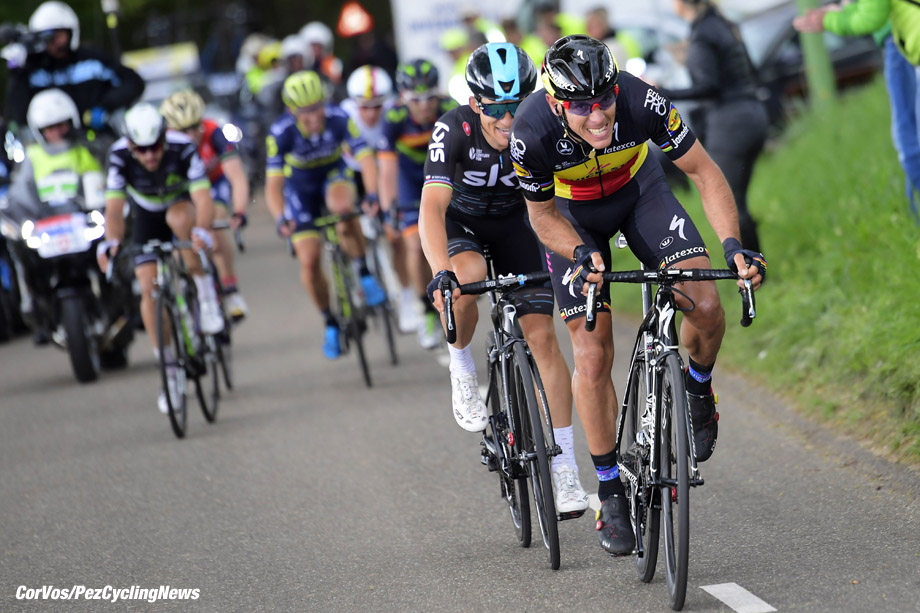 Sep Vanmarcke (EF Education First-Drapac & Belgium, 29 years-old) has no results to speak of this year but that’s irrelevant, the man beat Boonen to win here in 2012 and lives and breathes for the next six weeks of the season – ignore him at your peril. And his best years are still to come. 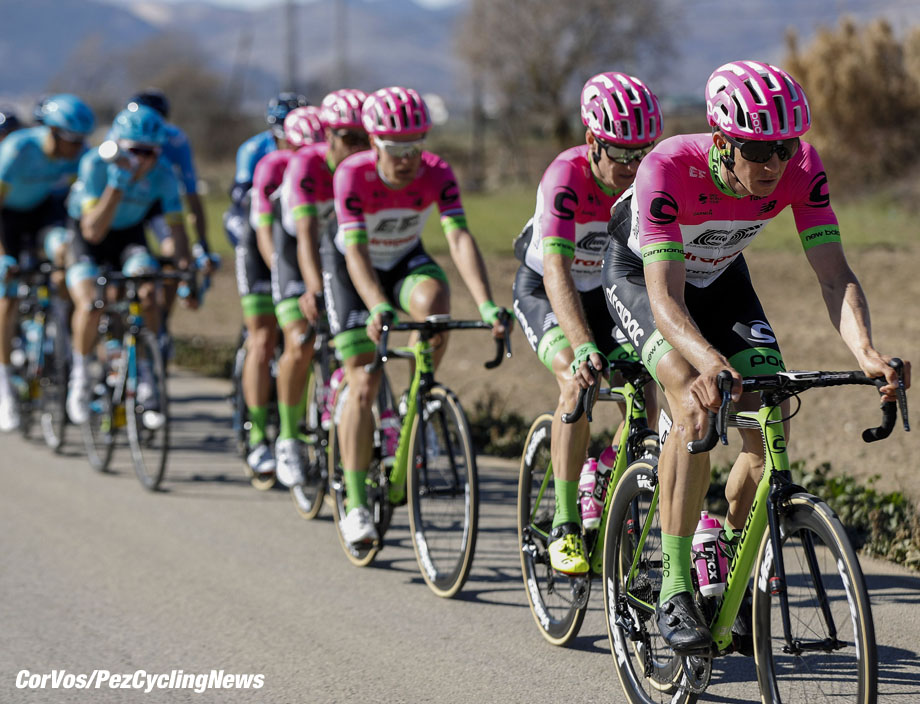 Tim Wellens (Lotto Soudal & Belgium, 26 years-old) he won in Mallorca in January and then took a stage and the GC in the Ruta del Sol, he’s ready. 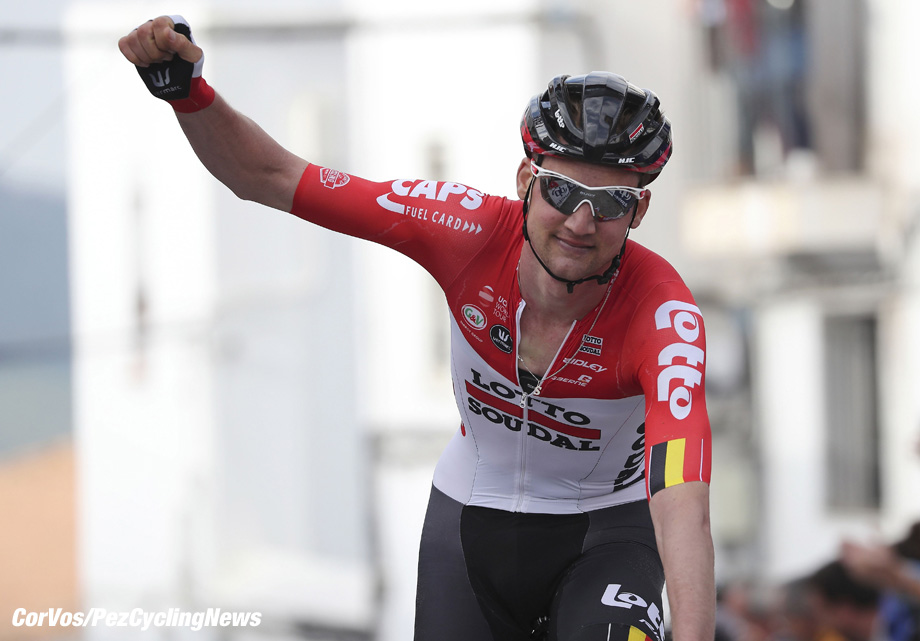 Tiesj Benoot (Lotto Soudal & Belgium, 23 years-old) the other tube in the sealant suppliers mastic gun; if he and Wellens are in the final together they’ll have a very strong double hand to play. 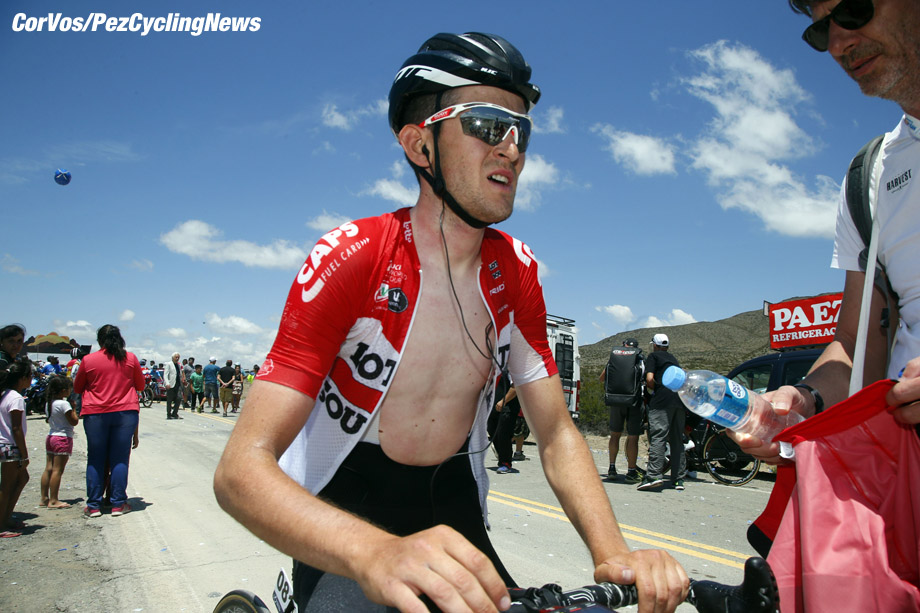 That’s our Big Five but not forgetting:
Matteo Trentin (Mitchelton-Scott & Italy, 28 years-old) it’ll be strange to see the rapid, smiling Italian not in the blue of QuickStep; he’ll have more freedom here but having those floor covering boys behind you is not something to underestimate the importance of. 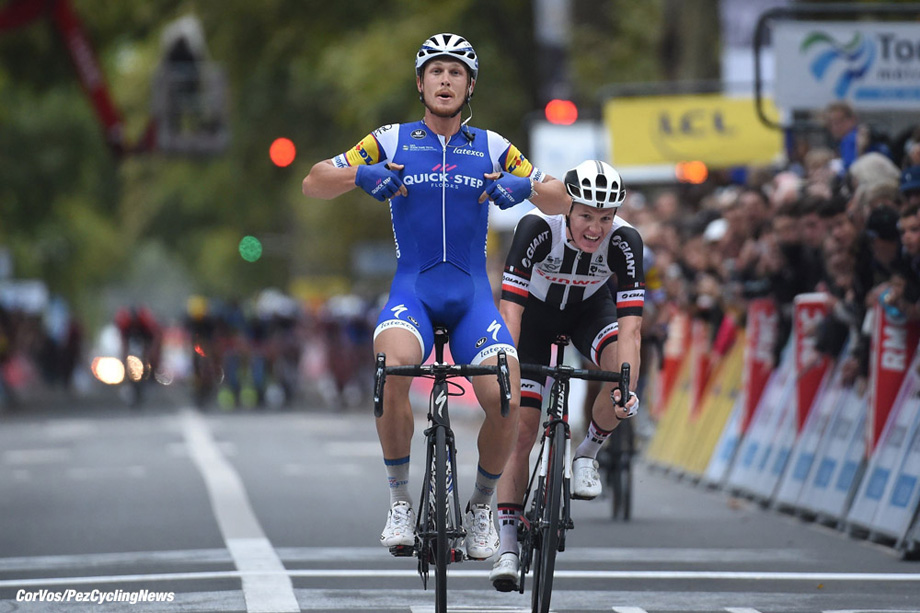 Niki Terpstra (Quick-Step & The Netherlands, 33 years-old) fast, willy, hard and part of the ‘Blue Machine,’ usually the ‘loyal lieutenant’ in this race – for 2018 he’ll have his freedom. 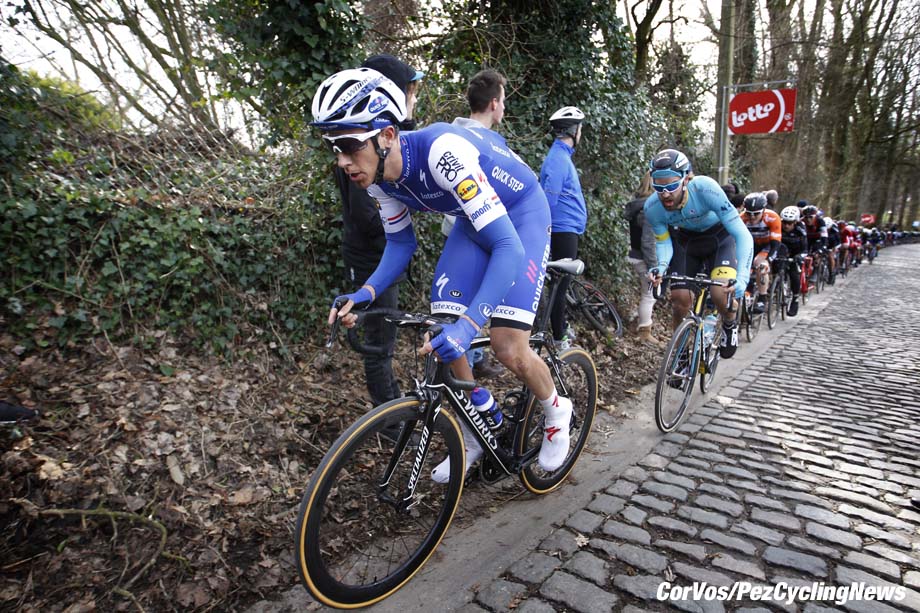 Jasper Stuyven (Trek-Segafredo & Belgium, 25 years-old) won Kuurne in 2016 and was second last year – but this is a bigger prize. No startling result this year so far but his season starts on Saturday. 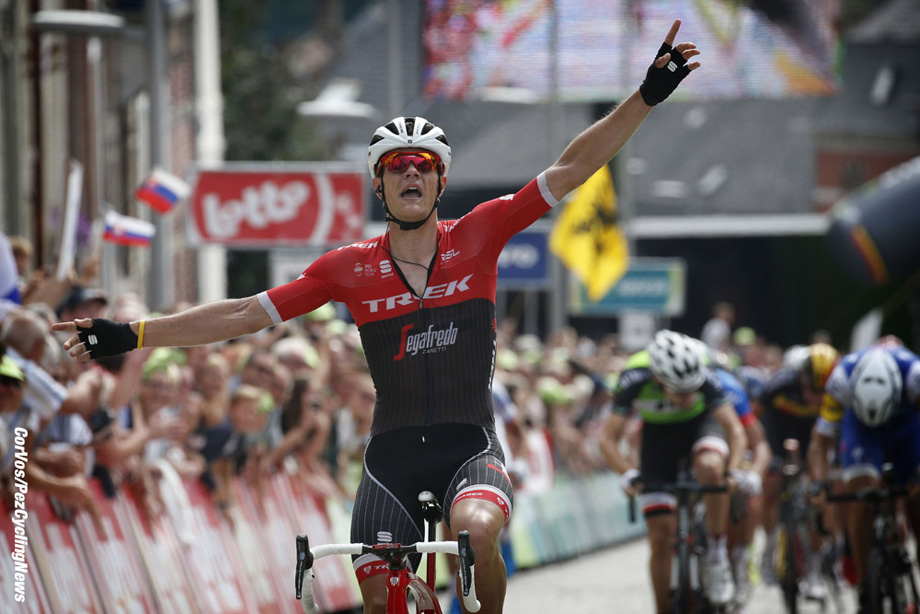 Oliver Naesen (AG2R-La Mondiale & Belgium, 27 years old) the Belgian National Champion came later than most to top flight riding but is making up for lost time and another big win to go with Plouay 2016 is overdue. 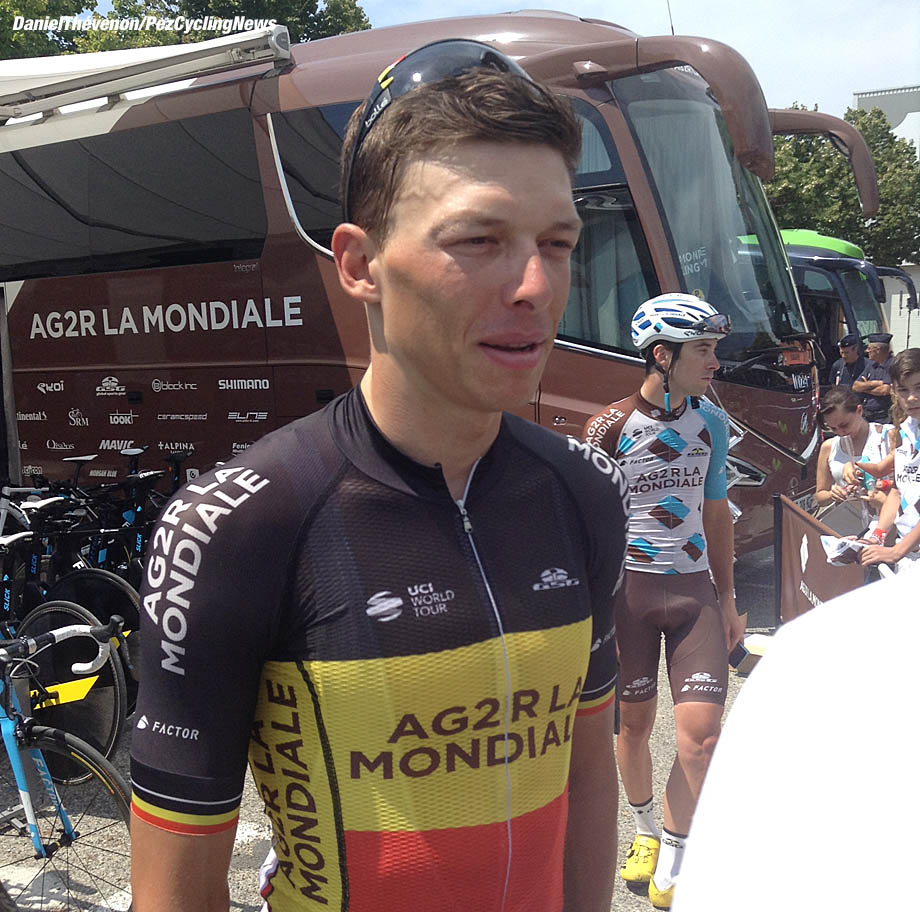 Jurgen Roelandts (BMC & Belgium, 32 years-old) the ex-Belgian Champion is strong and consistent with a good start to the season behind him in Valencia and the Algarve. If GVA should falter. . . 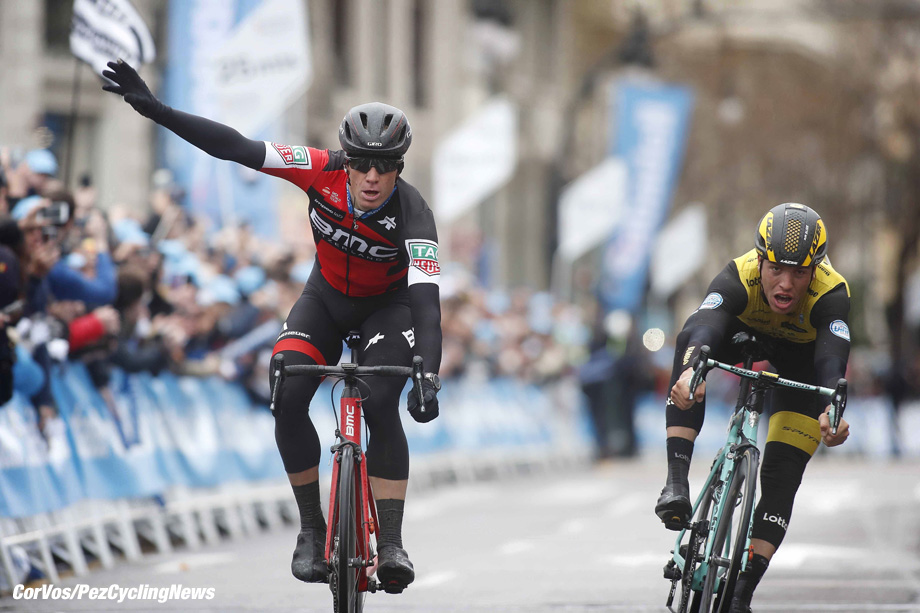 Kuurne-Brussels-Kuurne
And let’s not forget Kuurne-Brussels-Kuurne [UCI 1.HC], the ‘consolation’ race the day after Het Nieuwsblad. It’s the same distance at 200 K but with less ant-gravity stuff and fewer cobbles – and crucially 50K from the last climb to the finish on pan flat roads, it’s one for the hard man/sprinter. 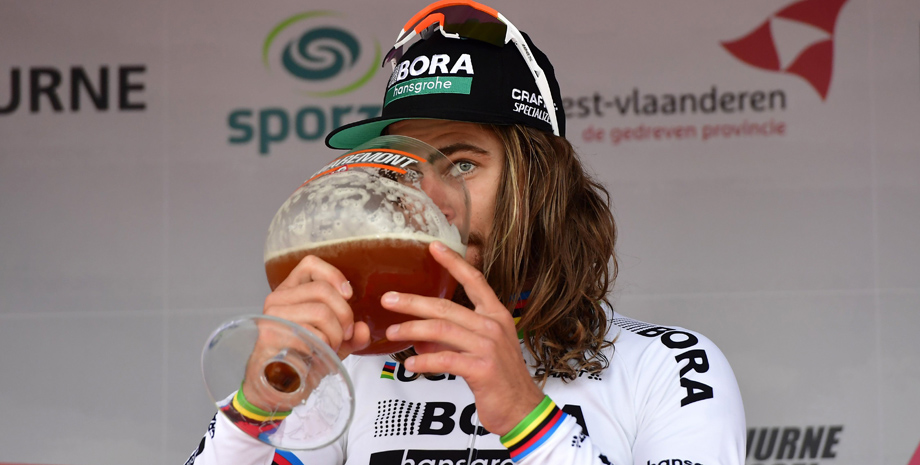 Beer for the winner in Kuurne

Albeit Stuyven won in great style after a 17K solo ride in 2016. Cav has won twice, Boonen three times – but whilst there are few surprise winners in Het Nieuwsblad a good sprinter on a good day can spring a surprise, especially if the weather is good, witness Australia’s Chris Sutton in 2011. 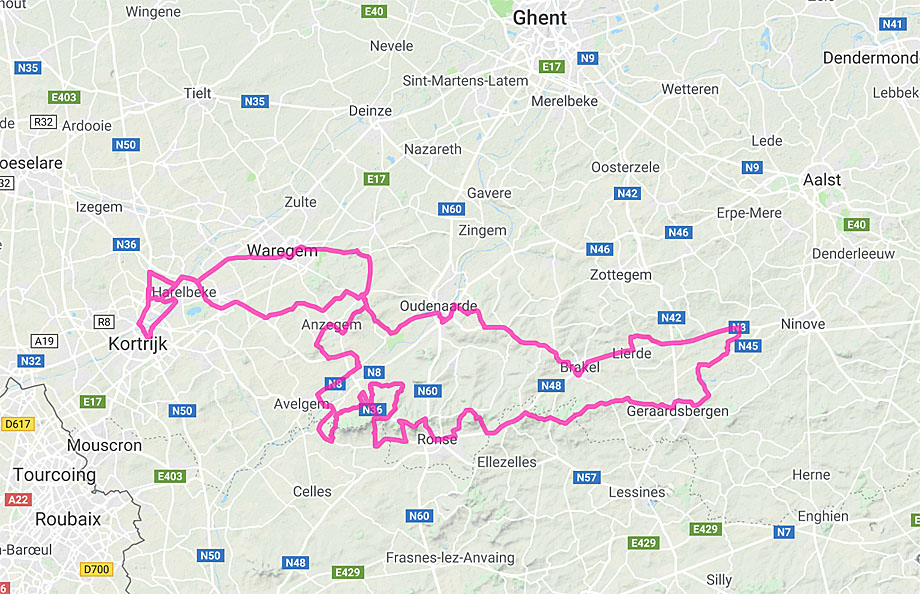 But if the weather is really bad that can spring surprises too; Dutch hard man Bobby Traksel made light of the worst weather I’ve ever seen a bike race conducted in to win in 2010 – 26 finished that day from a full field. All of the names we mention above in our Het Nieuwsblad preview apply – but there’s bound to be a surprise on that Sunday evening Kuurne podium.

# Full race coverage of both races: Ed Hood will ‘Roadside’ and the best photos and reports on PEZ. For live coverage check out Steephill.tv HERE.