Il Lombardia’17 Our PEZ-Man in Italy, Alessandro Federico, is getting himself ready for his annual ‘Race Chase’ in Lombardy on Saturday. The Giro di Lombardia is one of the ‘Monuments’ in cycle racing, but in Northern Italy the Classic is a ritual that has to be observed. Here is Ale’s preview of his Saturday in Lombardia. 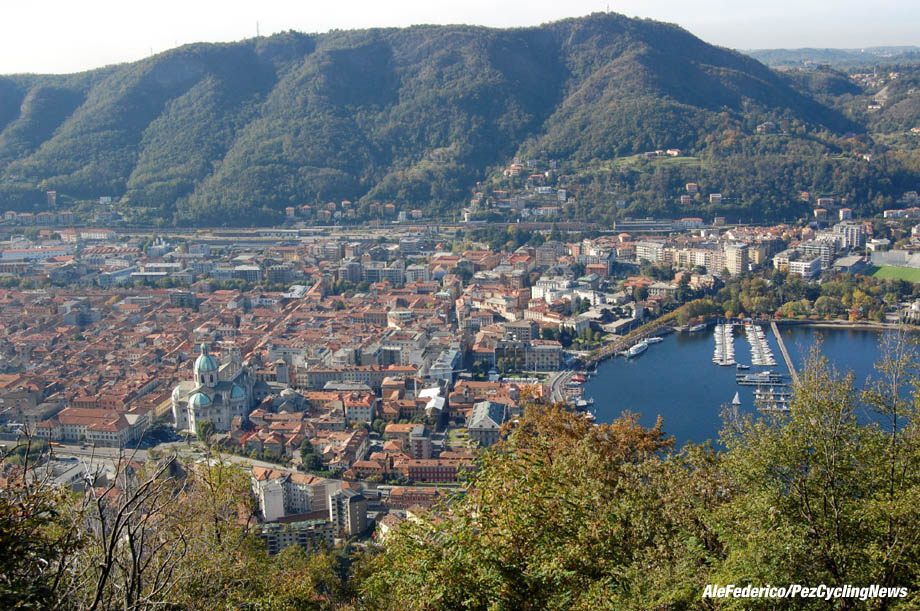 Como is one of the most fascinating cities in Italy, foreigners like it a lot because of its cleanliness and its efficiency. It’s very close to Switzerland and benefits from the “northern mentality” but maintains an Italian heart

If you ask to the Italian tifosi they will tell you that Il Lombardia should always finish in Como. There have been about 20 years, from the 60s to mid of 80s, when this classic was always finishing there and many of the champions that made the story of this race won there. Just think to Gimondi, Merckx, De Vlaeminck, Kelly, Moser and Saronni. 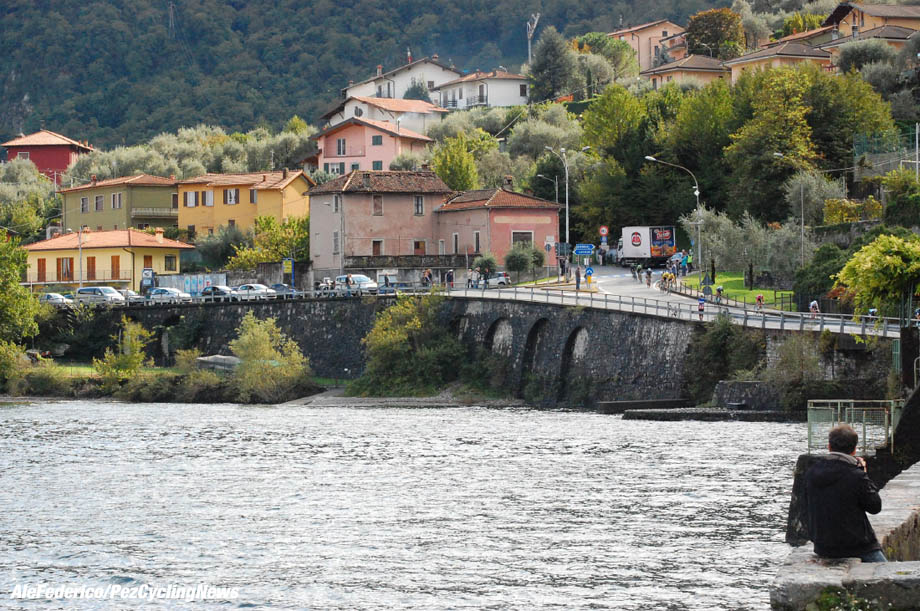 The lake is the real protagonist of the race since the beginning in 1905. The race touches the lake more than once and all the key climb are looking to the waters, especially the Ghisallo one

The city of Milano is also part of the long story of this classic, but it is too long a time ago (before 1961) and the late try by organizer to set the finish there (end of ’80s) was not a lucky one, because of the long flat in between the last climb and the city. Bergamo is part of a new story, 19 years finishing there, but the heart of the race is the lake, and Bergamo is too far from it. Il Lombardia has not a fixed route, it changes frequently, but passes from the same places and climbs. If you think of this race you pick up the Ghisallo and Como is really close to it. So, no doubt, Como is the right finish town for this classic. 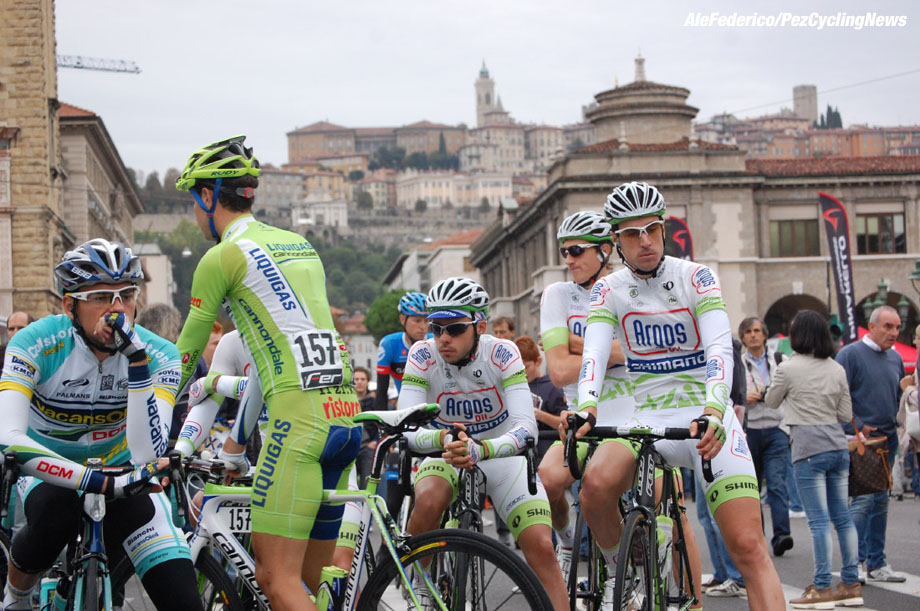 The departure will be in Bergamo, which is also often a finish for this race. Riders will line up showing their backs to the old towers, built on the hills

During last three years the organizers decided to share the finish in Como and Bergamo by assigning alternate editions to them, last year was Bergamo’s turn (really a nice edition), so 2017 is for Como. This city is at the border with Switzerland, surrounded by hills, dominated by her dome and touches the west side of the lake. It isn’t difficult to find a climb close to the finish, if you look at the race map you realize that Civiglio and San Fermo are on the two sides of the town. 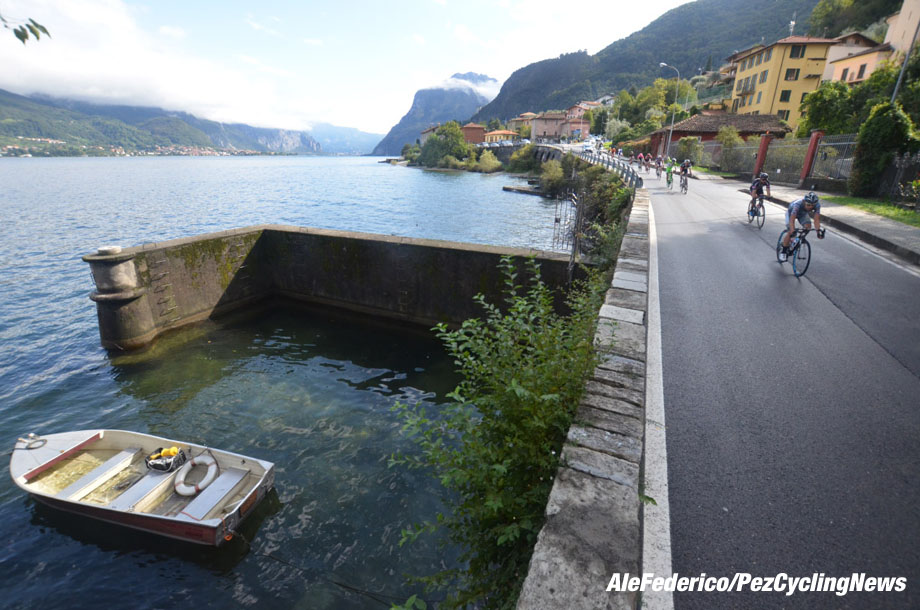 Fast passages and quietness. This is one of the contrasts I love, the race comes fast and disappears. The villas and their small beaches seem to sleep without being disturbed by the flash of rides

Let’s get a close look at the race route and let’s make some predictions for tomorrow. The start is on the flat, but after 50km (the first hour) the race will climb the Colle Gallo, which was a decisive climb of the race in the late ’90s for the Bergamo editions. It’s the right moment to set up the early break. The race will pass again from Bergamo and will head to the lake through a wide valley. Before touching the lake the race will climb Colle Brianza which is just a 2nd category climb, maybe a 3rd one. The first touch of the lake is very short, just few kilometers, then back inland towards Ghisallo from the classic descending side, till half of the way: three hours have then passed when the race heads again to the lake side descending from a cliff to Onno town, with its small and beautiful fishing boat port. At this time the race is fully launched to keep the Ghisallo climb in good position, because Bellagio is just 10 km away. The early breakaway is going to be over and we should see one solid team control the race. Sky? Bahrein? FdJ? There are many favorites this year. 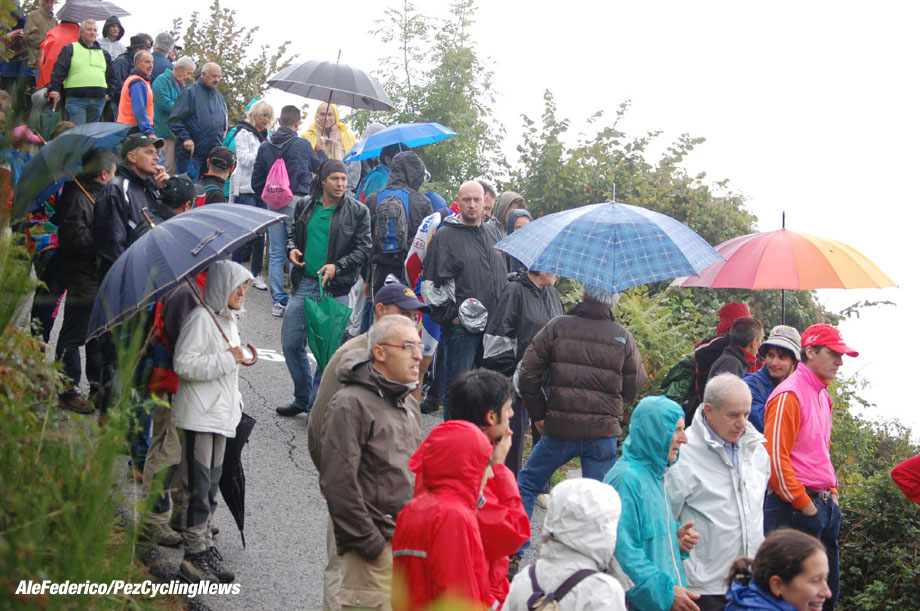 This is the key point of the entire race. Muro di Sormano was first tried in the ’60s but was too hard a climb. For years it was forgotten, but in 2012 was re-proposed by the organizers. It’s a decisive climb for the selection of the bunch. Those who loose wheels there will have no chance for the win 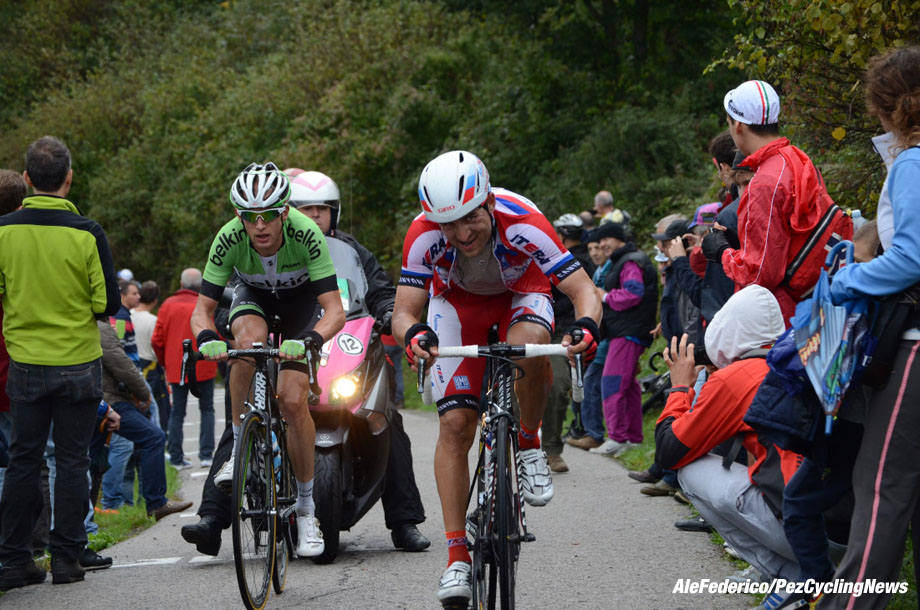 Everybody is struggling over the Muro, even the tifosi walking up there. The late riders are usually completing the climb and afterwards jumping into the team cars and out of race

You’ll find many reviews about Ghisallo, also in the pages of PEZ, but it won’t be decisive for this edition because after it the race has to climb Sormano. The “Muro”, the crazy 2 km which are reaching 27%, is not at the foot of the climb, but at the top. Before the Muro there are already 5 km of regular climbing at about 5%, which could be categorized as “Cote” in a Liege. Just after Sormano town the race has to leave the main, wide, regular road to climb that secondary, narrow, nasty Muro. No cars allowed there, any time of the year! On top of the Muro you’re on top of the climb, at Colma di Sormano, the highest elevation of the day at over 1.100 meters. Remarkable for October, sometimes it’s cold there. 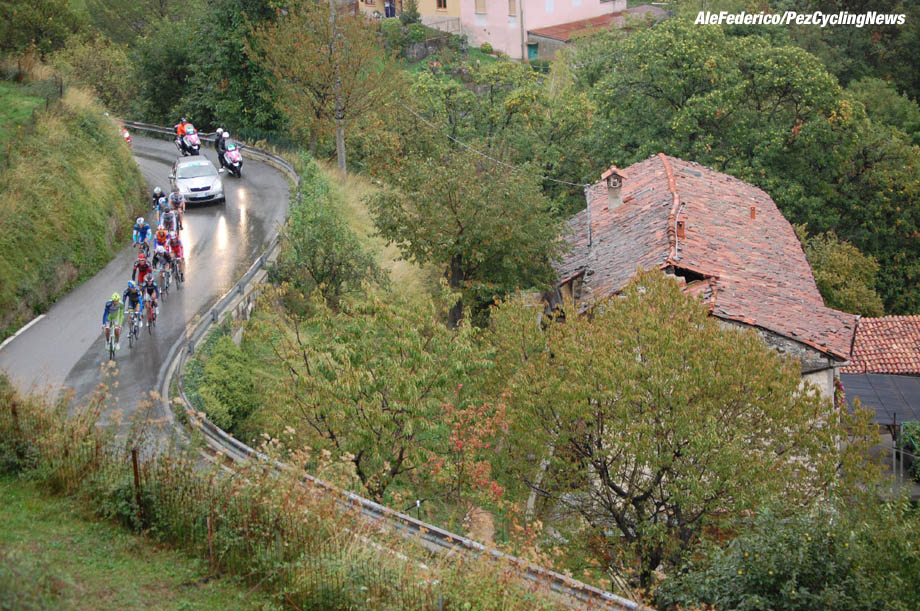 Lombardia is the late classic of the year. October may give warm sunny days but also wet and cold ones. The falling leaves are a symbol of this race and recently we’ve seen some very rainy editions in 2012 and 2013 for instance

The following decent is really very difficult, with the good weather it’s ok but in bad weather conditions it is very selective. Nibali crashed there in 2010 and two years ago Kwiatkowski was very nervous because of the fog at a certain point. It’s important to get a look and mark all the names in the leading group, because the winner will come from those names. The team with more riders in the group of leaders is also in a more favorable position. 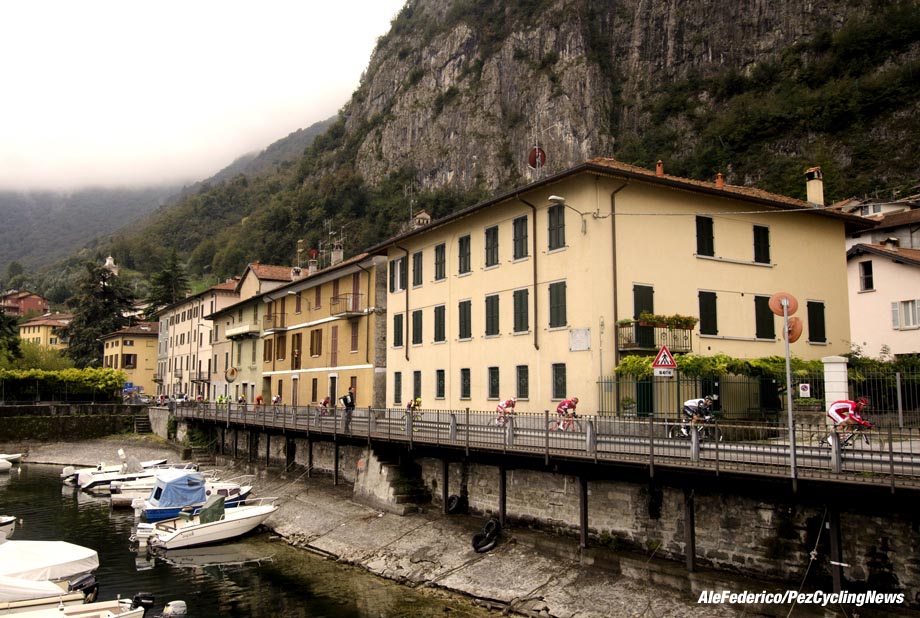 Passage in Onno, just before the Ghisallo, the riders are pushing hard to be in the right position for the last 80 kilometers of the race 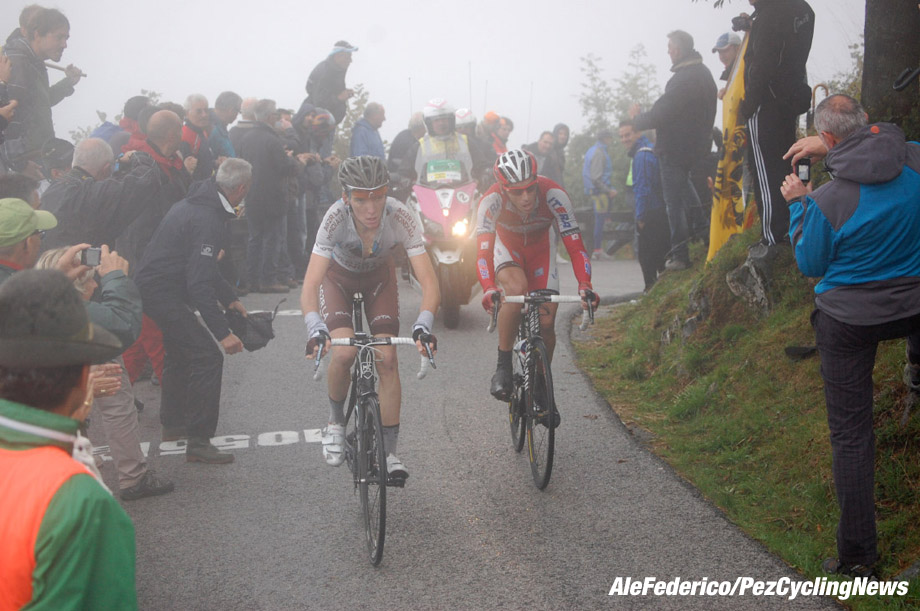 Bardet and Losada were the first at the top of Muro di Sormano in 2012 when the crazy climb was back in the race after 50 years. Bardet was a young rider looking forward to be a leader, I believe he’s really grown from those days

At the end of the descent the race is back to the lake (other side) and there are about 20 km to the first passage in Como for the big final: Civiglio and San Fermo. The finalé is unpredictable, the winner can come from the Ciciglio climb, or descent (Nibali 2015), or San Fermo, or counter attack, or from a selected sprint on the straight final kilometer on the side of the lake. For sure there is about 30 minutes of “heart-attack” final. 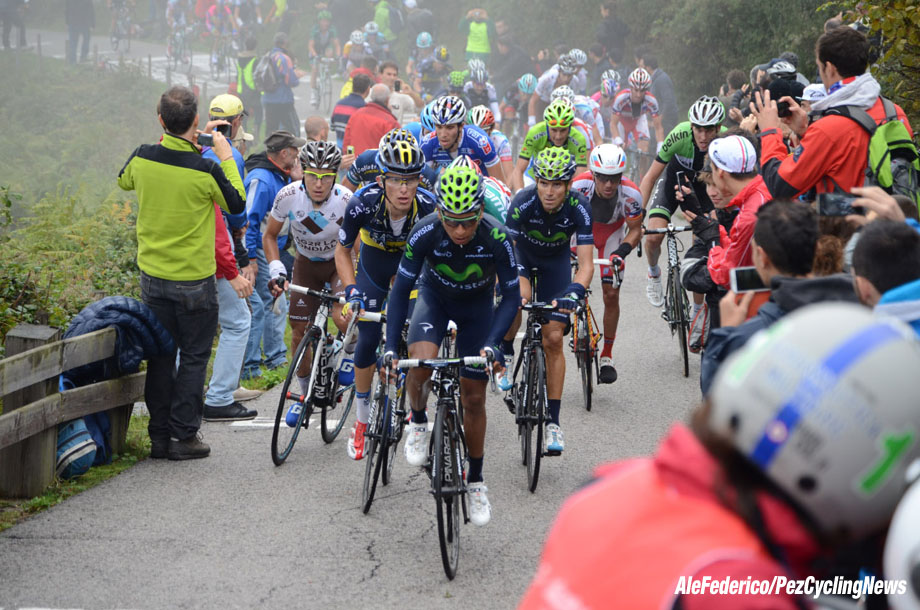 Quintana was setting the pace on the Muro in 2013 for the benefit of his teammate Valverde. Behind him a bunch of big names, busy with the terrible climb

I will be in place for PEZ to chase the race and try to capture race moments and all that is around that day. I have planned the start, a couple of passages on the lake and the finalé in Como. Two years ago, I did the Muro but missed Como. It’s a hard choice and there is also a margin to change my decision. Till the last moment. 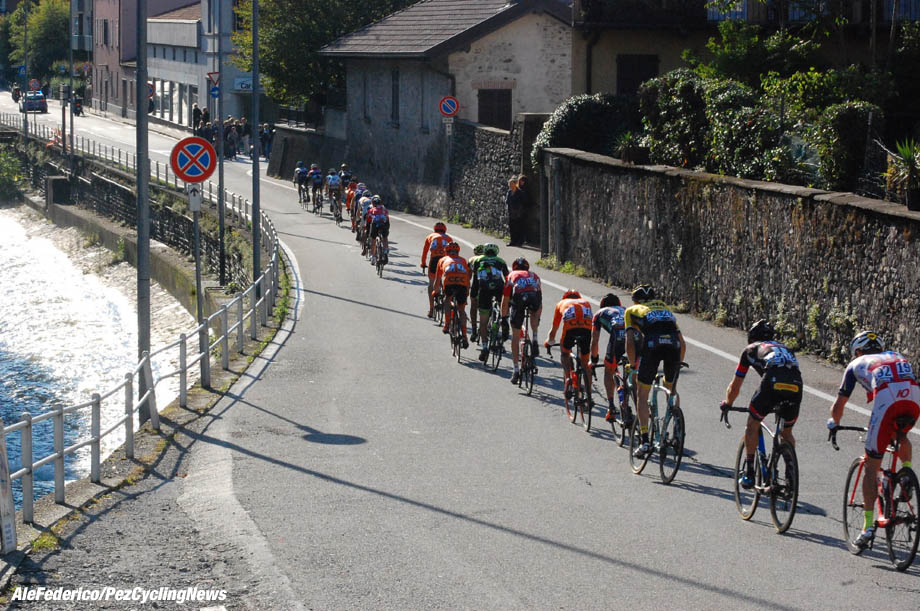 The last 20 km of the race will be entirely in Como surrounds. Roads are twisty and narrow, with some great and selective descents

Ale will be roadside for PEZ and Ed Hood is on race report duty on Saturday. You can see more of Ale Federico’s photos on his instagram page. Live TV on steephill.tv.

Keep it PEZ for everything Lombardia.