Il Lombardia’17: We wouldn’t have covered the Giro di Lombardia properly without Ale ‘our man in Italy’ Federico’s roadside race chase. As usual, things never go to plan, but there is always a tale to tell from Ale’s day in Lombardia. 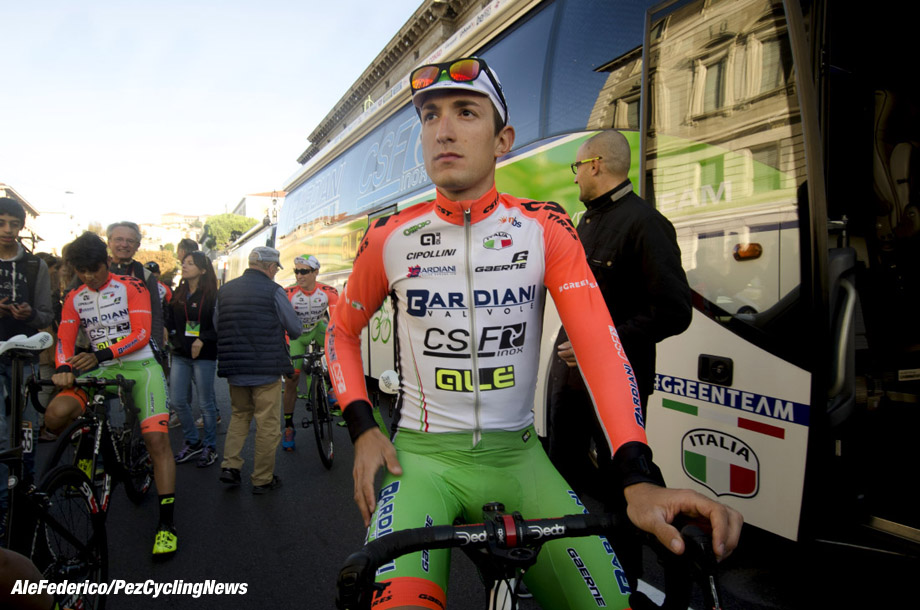 It’s 7am and I’m under the shower in my room in a suburb of Milan when the phone rings for the first time. It’s a sunny day, it’s Lombardia day and Angelo, my friend, is looking for me. I believe he wants to check what I’m doing but, actually, he just found that the car is not working and needs help: in a few minutes the plan ‘B’ is set. My original idea was to watch a couple of passages on the lake and the finish in Como, but Angelo’s plan was to watch the race on Muro di Sormano. 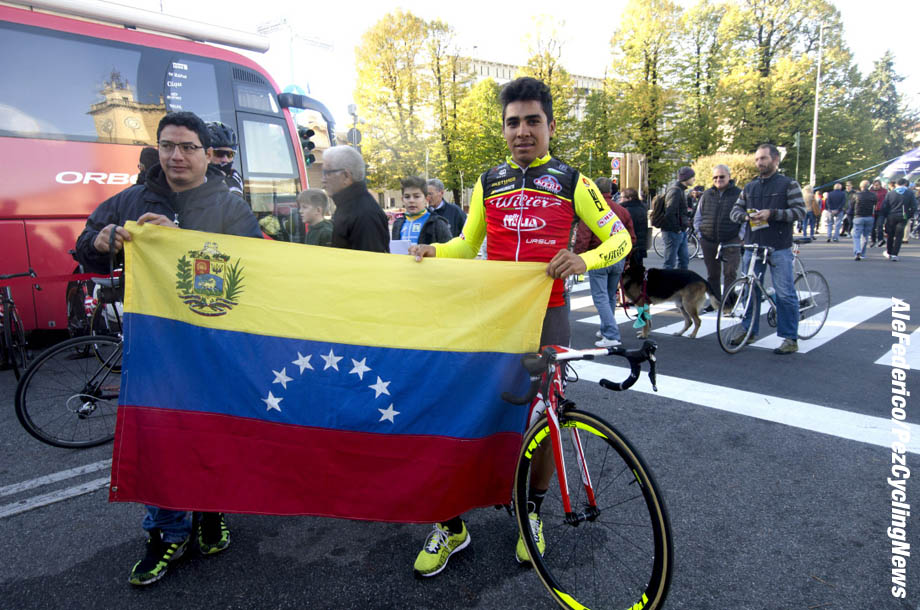 He is the Venezuelan Yonder Godoy together with some friends that live in Italy. The Lombardia is for many the last race and a good opportunity to have family and friends together for a day

The solution is a mix of the two plans which finally is great. A friendship is also the ability to find the best in each other and, mostly, the pleasure to pass a day together regardless where and how. So we decide to go to the depart, a couple of passages on the lake and the Muro. The start is in Bergamo and I have lost the number of times I’ve been there for Lombardia in the last years. It’s a frequent location for the departure and it’s quite easy to reach; many parking opportunity, no stress to find the credential bus and lot of time to reach the next passage, so… good! 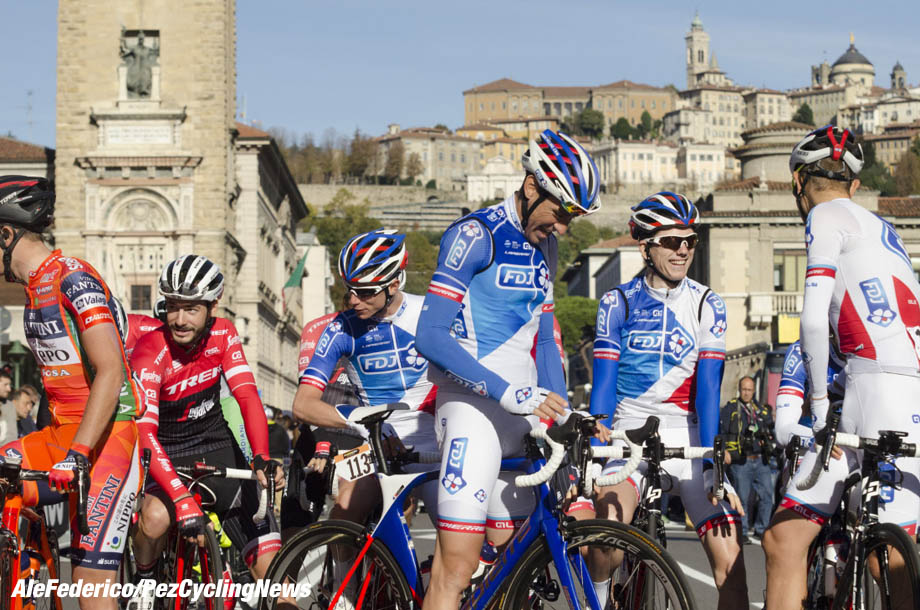 FdJ riders line up below the old town watching from the hill. All riders are smiling, which is uncommon for a race start, but we have to consider that for many this is “last day of school”

The air is quite chilly but the sun is strong, it will be a warm day, after lunchtime. The sunny day helps us also as it invites the riders down earlier than usual. The big guys comes at the end but this is quite normal: they are the stars and every star comes later than “others”. I observe that Pinot, one of the favorites, is very friendly with the tifosi. He signs a lot of autographs and is available for many selfies. Approachable. This rider is very cool and I like him because he loves to ride in Italy: this year he started with Strade Bianche (where he attacked in the early breakaway) and then Tirreno and the Giro too. It’s always very difficult to make predictions at the start. Someone is more relaxed and someone else more stressed. I learned it doesn’t mean anything because each rider reacts very differently to the race tension. 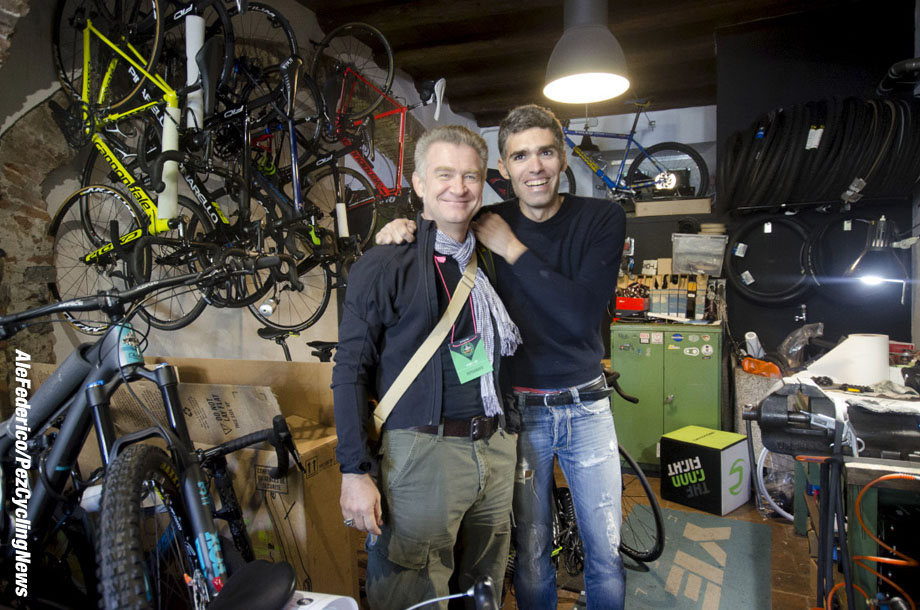 Angelo and his friend Emanuele inside “Lele’s” bike shop in Malgrate. Lele is a very nice guy and a very good mechanic, well known in the area

The first passage after the departure is Malgrate. This is a town on the side of the lake, just in front of Lecco. It’s also the departure town for many rides for amateurs from every part of the world who come to visit the Como’s lake district. Bellagio, Ghisallo and Sormano are all in the area. Angelo knows a friend in this town, Emanuele, who’s the owner of a bike shop and mechanic there. He moved a few years ago from the city and now has found a sense of peace in front of the lake. His bike shop is really very well supplied and he has a team of mechanics. The half hour I’ve spent there has been a continuous flow of amateurs asking for support. He must be really very good in his job, much recommended if you go to that area. The race comes at lunchtime and there is a breakaway of six with about six minutes up on the peloton organized in the pursuit by the Bahrein-Merida. Nibali wants to make double in Como and doesn’t hide it. 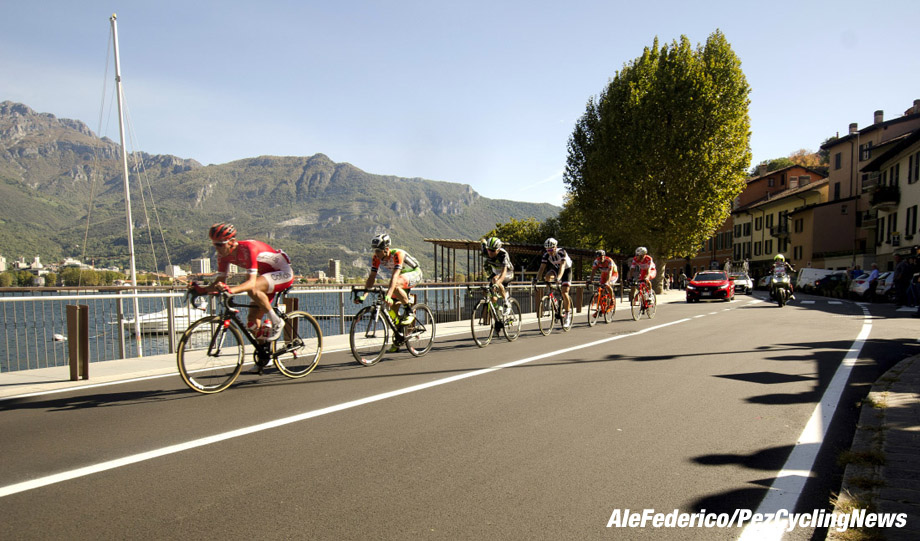 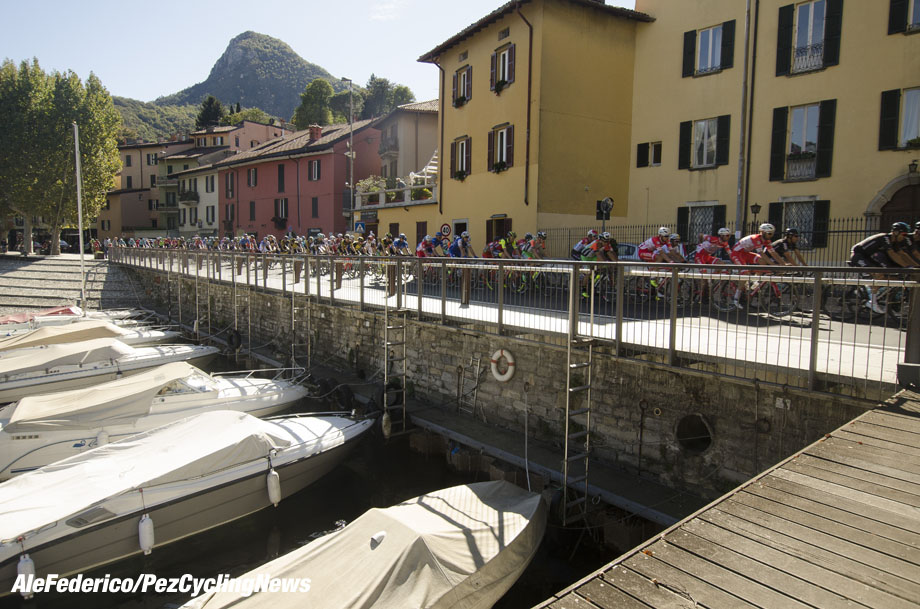 Malgrate is a small port. The race often touches this kind of town on its route and this is the most fascinating part of the race

Next one is my classic: Onno. This is another very small town on the lake and it’s a “must” for my Lombardias. It’s a very fast passage and there isn’t a good reason to watch it, but I’ve been here since the very first time in 2005 and basically I like the place. A quiet small harbor with few boats covered by the tarpaulins for the winter time. The race is fully launched to the Ghisallo and the “harbor passage” comes at the end of a fast descent, therefore the speed is very high and you can just guess who’s who while 200 riders are passing through. 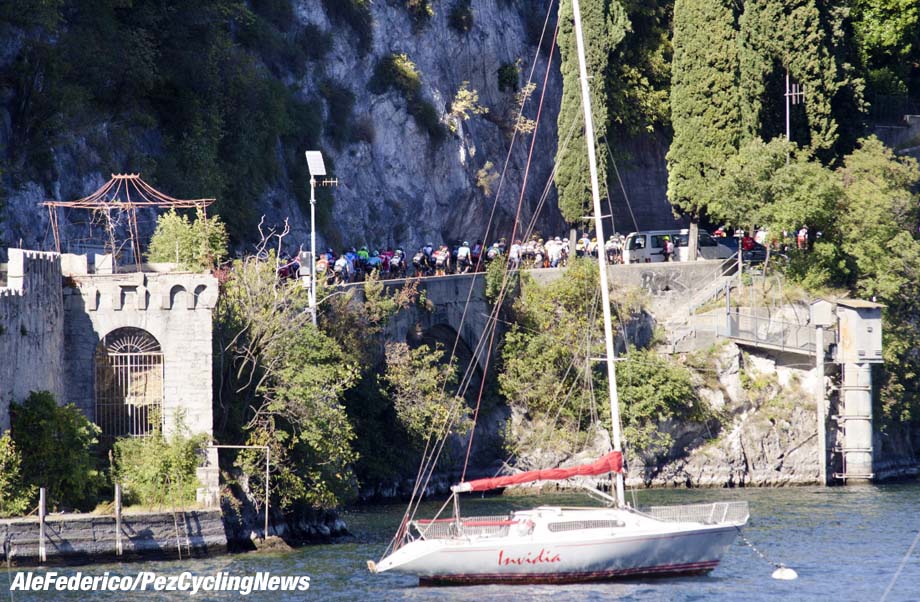 The Lombardia 2017 was ridden by 199 riders of 25 teams. Just half of them will reach the finish and the last one at over 20 minutes 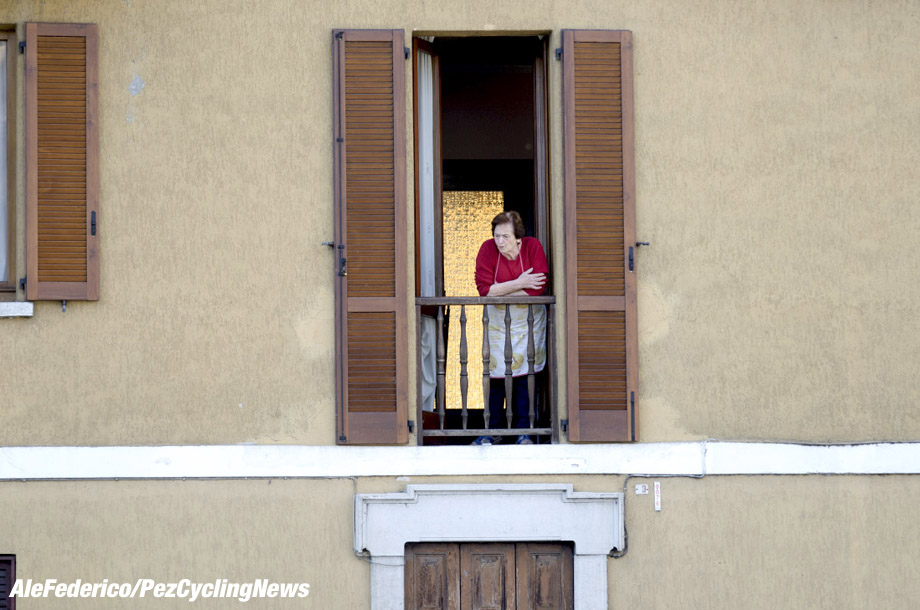 Many people on the road, more than usual, but someone is more lucky than anybody else. How many can say that Lombardia passed below their window?

The breakaway is almost over with less then 2 minutes only and Bahrein is always leading the bunch. We run to the car because we know that for the next drive we have a tight schedule. Angelo knows me so well that when I come to the car he is already there; definitely he is the best race-chasing-mate ever! 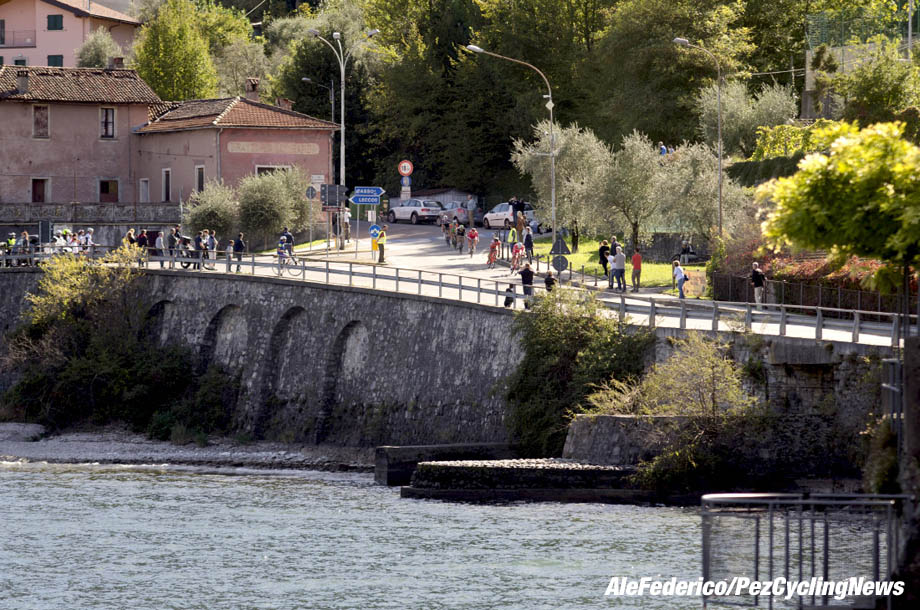 Leaders reach the lake waters again after a fast descent. Their max advantage was 12 minutes but now they have just 2. 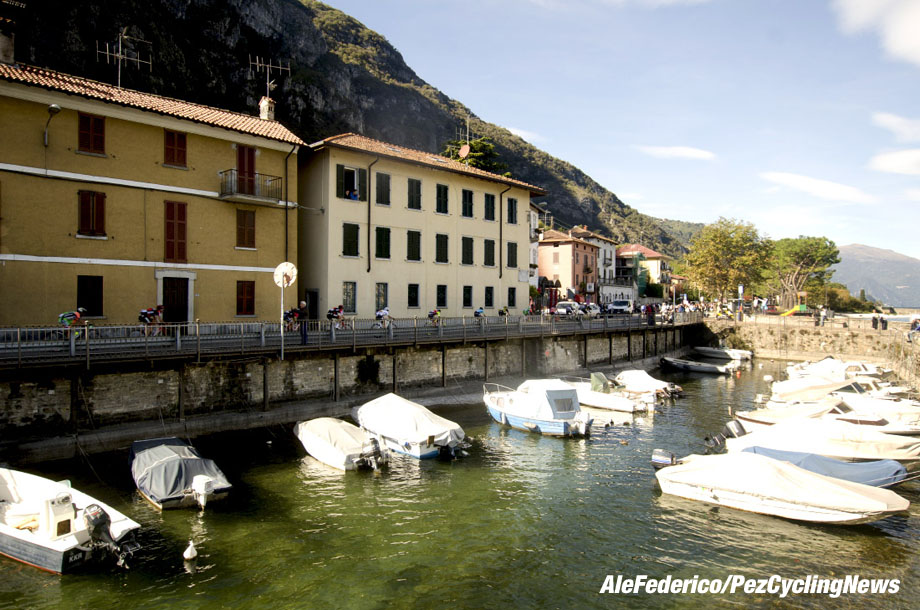 Very fast passage of the group beside Onno harbor.

Next stop is Muro di Sormano. It’s a long way up from the lake to the top of Colma di Sormano at 1.100 meters. Over there the view is amazing and the wood is already wearing the fall colors. We find a queue at the bottom of the climb, that adds a bit of a thrill to our day, and then a smooth drive to the bottom of the Muro itself where we can’t find a car park. We decide to proceed with the drive on the main road till the top and then walk for few hundred meters. What we find is simply stunning. We’ve never seen so many people on the road for an Italian one day “Classic”. This is the amount of people that we usually meet for the Giro on the Alpine climbs. We are just a few minutes ahead of the race (in perfect “Ed style”) which is led by Cherel and a few others. The favorite group is “compatto” with Visconti setting the pace for Nibali. No attacks means that the race goes in the direction Nibali wants. 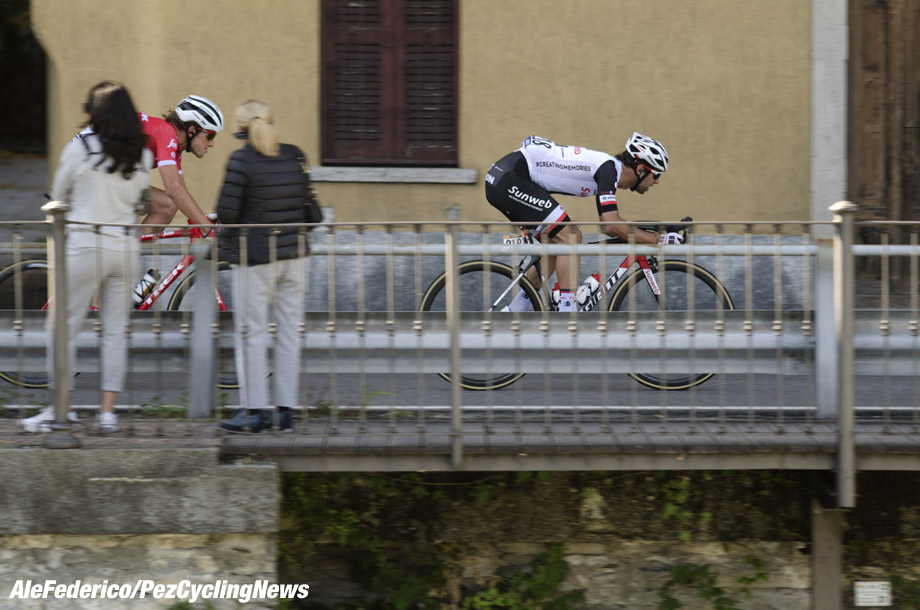 Matthews still in descent mode. It’s strange that the Australian went to Lombardia instead of Paris Tours

Our chase is now complete and we can relax watching the race on the television in a bar down below in the town. The bar is full of people that are already watching the race; while we park the car we may listen to a common cry, which alert us that something is happening. People clap from inside and we think that probably an Italian is making his attack. Will it be Nibali? It’s definitely him descending like crazy down from the Civiglio. Pinot chases, but then that is over and Alaphilippe tries, but too late. 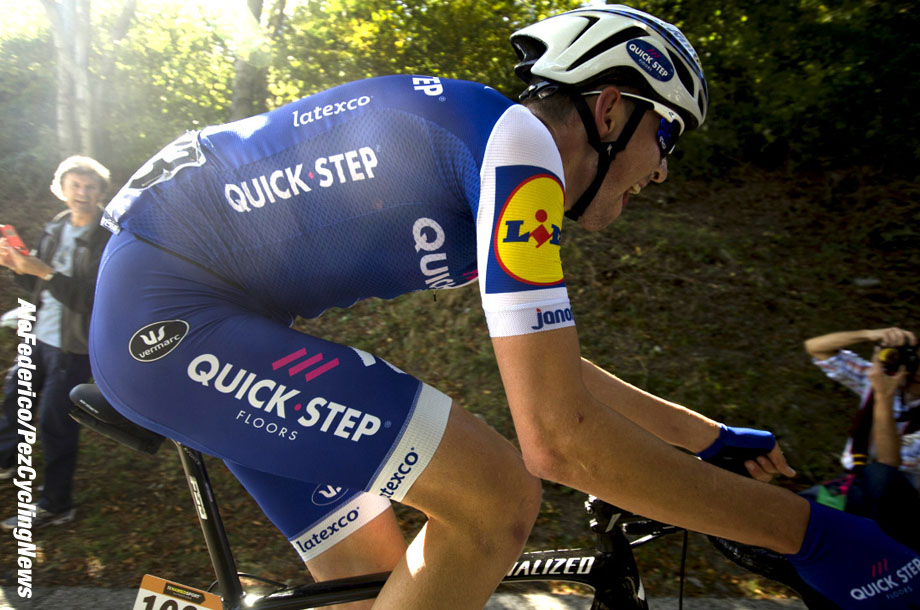 Laurent De Plus climbing the Muro. During the descent he will have a very nasty crash flying over the barriers. Luckily no big damage for him. 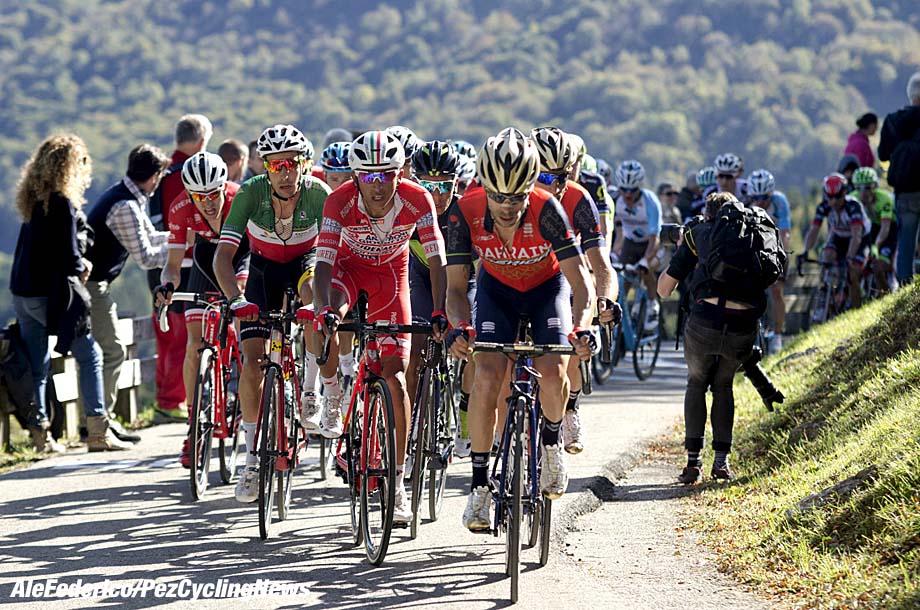 The group of the best climbing Sormano. Visconti leads and behind him on the left Nibali sits comfortably. The rhythm isn’t too fast and the selection is limited (but anyway significant) from behind.

When Nibali crosses the line our day is really over and we have to think of our way back home. For Angelo is a short trip to Milano, but I have to reach the Adriatic sea with some three hours more to drive. Now the risk is to stay in touch only with WhatsApp and not to see each other till Strade Bianche next March. But who knows? Friendship may always surprise! 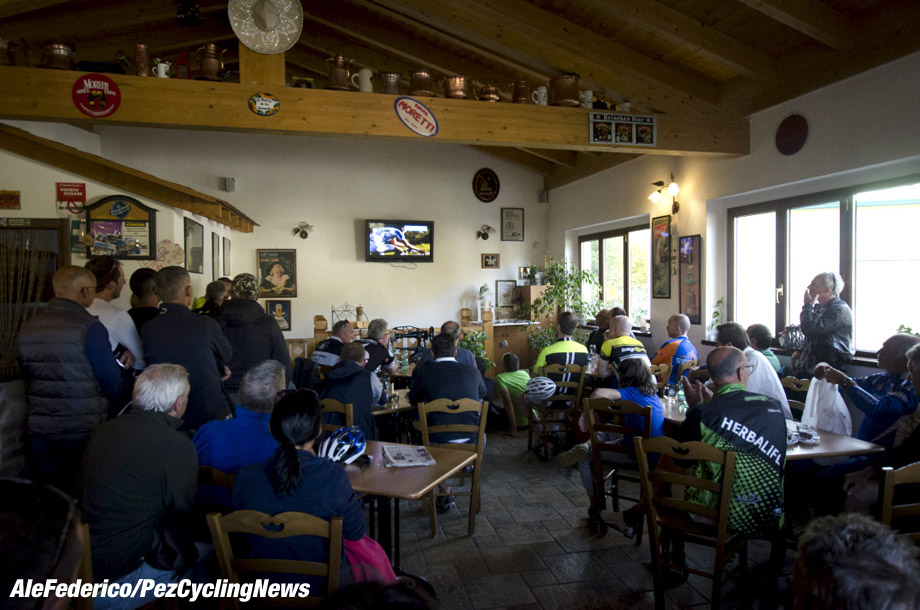 At Sormano’s bar, down below in the town many tifosi has regrouped to watch the race. On the tv screen Pinot is trying to catch Nibali and tifosi concentration is full

Did Ale’s day go as his preview predicted? See it HERE. And more of Ale Federico’s photos on his instagram page.

Extraordinary Season Finale for SIDI and Their Champions!