Inside The Copenhagen Six!

The famous Copenhagen Six is the traditional last port of call in the six day season and once again our man Ed Hood was in the thick of the action. Here’s his view from the centre of the track in Copenhagen.

All roads lead to Copenhagen for the last race of the winter. The season started in Grenoble in October – albeit the race in the ‘Capital of the Alps’ is down to four days, now.

And troubling rumours circulate that there will be no race in 2013. Amsterdam is next, but more woes there – one of the bankings was badly damaged in a recent fire. But word is that the insurance will meet the costs and Continentals will again polish the boards.

Gent marches on, oblivious to fashion and Europe’s financial woes; ‘Not go to the Kuipke – Don’t be ridiculous!’ Zurich has cut back to four days but seems solid.

Rotterdam is promoted by the same regime as Amsterdam and is in decent health – although murmurs of a contraction to four days have been heard. Bremen was ‘a little better than last year’ and the organisers and sponsors are optimistic.

Berlin was a virtual full house every night and despite the organisers’ constant, ‘we’re not making money’ mantra, the race seems in rude health.

Which brings us to Copenhagen.

Only on Sunday afternoon – courtesy of large numbers of free tickets – and the last night were there sell outs. This year was the race’s 51st edition and a six day season without Copenhagen seems unthinkable – but we said that about Munich.

Cycling’s constant evolution is Copenhagen’s enemy – new, early races like San Luis and Qatar are now a major part of many pros’ preparation. Iljo Keisse was fighting the desert winds whilst Kenny De Ketele was required to be at his team’s training camp – as was Tim Mertens.

And even if the road pros were available, it would be hard to find the money to pay them. But let’s be optimistic, ‘the future is unwritten.’ 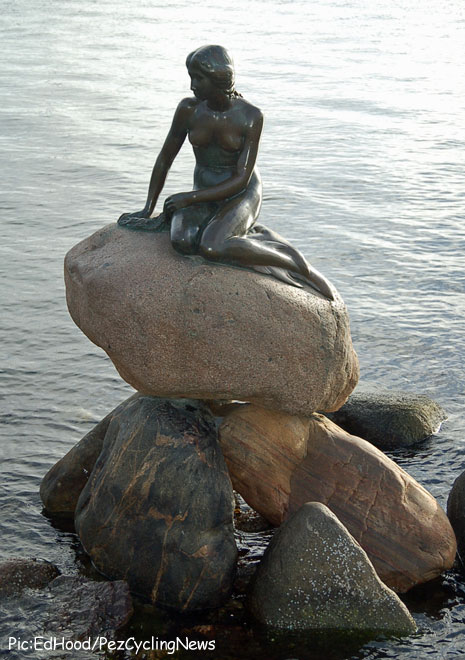 And without further ado, let’s take a look at the names that mattered in Copenhagen. It would be bad manners not to pay tribute to the city’s most famous lady.

She’s not as big or as far out in the harbour as you may expect – but she is lovely. 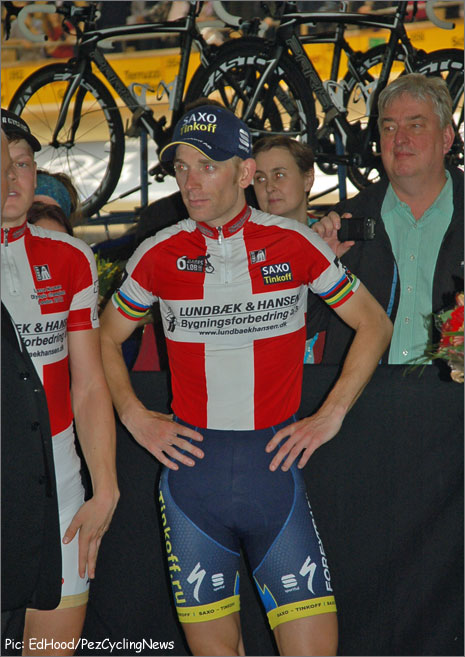 Michael Morkov scored his fourth win in the race. I remember his first six day – Grenoble, where he crashed and broke his collar bone. Partner Alex Rasmussen finished the race with Marco Villa, by then in the twilight of his career.

Michael told me he wanted to be a six day star. Grenoble, Gent, Berlin, Copenhagen; this was his 10th win and 18th podium – job done. But he’s so much more, too – Classic enlivener, Tour de France star and Olympic medallist.

Although for me, there wasn’t the magic of a Morkov/Rasmussen triumph – but then, I’m biased. 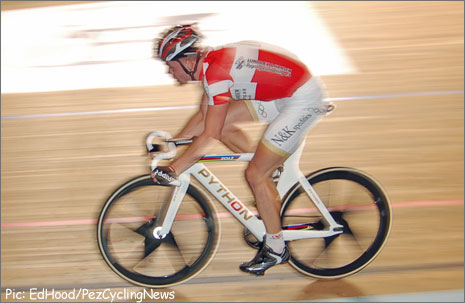 Love or hate the omnium it’s not an easy event to win – especially at just 20 years-of-age. But that’s exactly what Lasse Norman Hansen, Michael Morkov’s partner in Copenhagen achieved. A brutally strong lad, he lacks the natural empathy with the contours of the track which the likes of a Keisse or Schep possess, but remember – he could easily still be riding this race in a decade. 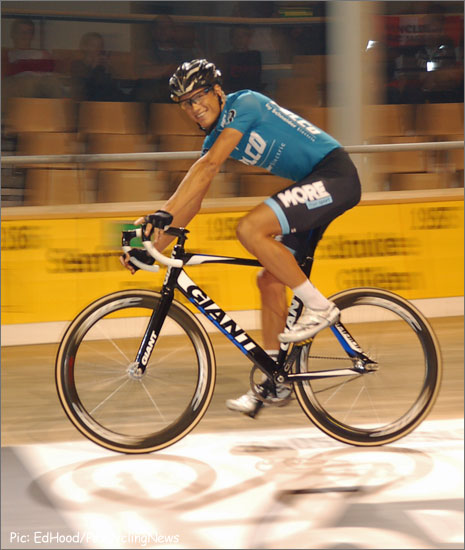 Not many riders would give up an offer from a pro team to race for themselves – and to pick and choose their own programme. Guy East did, there’s more to life than money in Guy’s book – check out our interview with him here – but he does love those six days.

If ever there was a natural on the boards, it’s Guy East. There are invites for next year, already. 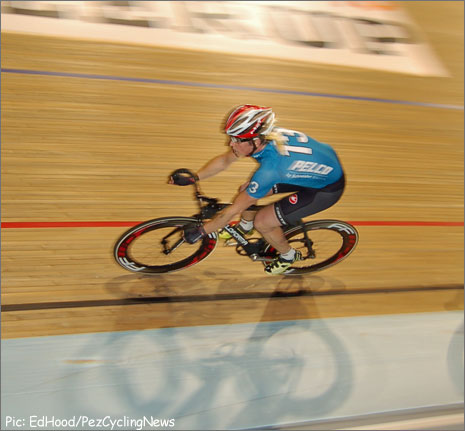 Guy’s partner, Zach Kovalcik isn’t perhaps the most stylish rider on the boards – but the man can hurt himself. He needs road miles and stage races if he wants to progress, let’s hope he does them and we see him back next year with more endurance.

The man who holds it all together; 300 plus six days under his belt and he’s worked at Copenhagen on more than 30 occasions. Not much more needs to be said about Kris. 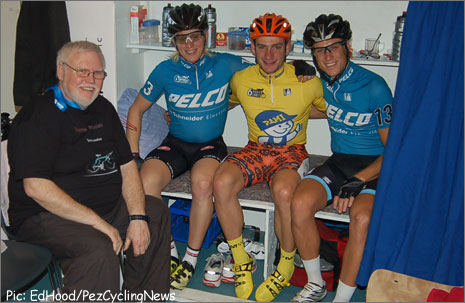 Here he is at his happiest – with his boys.

But there are other soigneurs – ‘Stanley’ from the Czech Republic works in the family butcher business; ‘not getting up at 05:00 am at six days is holiday for me!’ 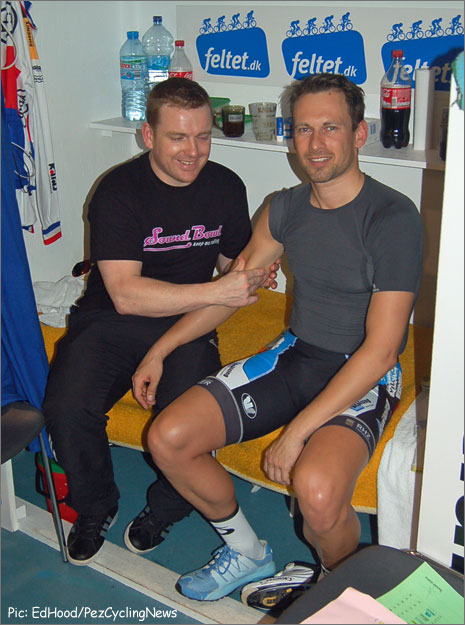 Here he is with Bjorn Schroder, working off the pain of all those exchanges. 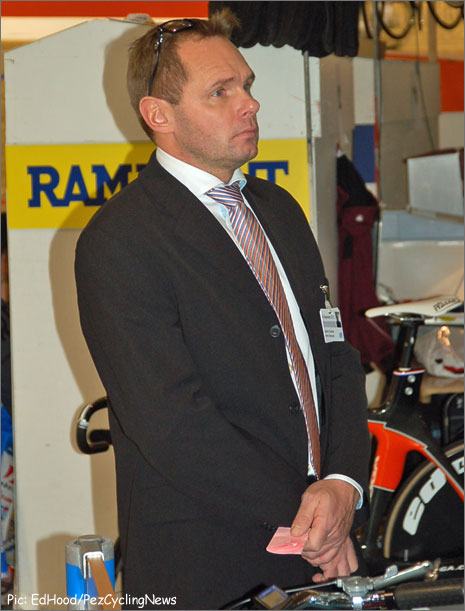 Organiser since the beginning of time, Henrik Elmgreen retired last year with the reins being picked up by Messrs. Sandstod and Madsen. Jimmi Madsen was a good pro – a multiple Danish National Champion on the boards, European Madison and Derny Champion and winner of six days in Ghent, Stuttgart, Bremen, Herning and Copenhagen – but ‘laid back’ wouldn’t be a good description.

Me, desperate for wi-fi; ‘excuse me Jimmi, may I have a word, please?’

But I love him, really. 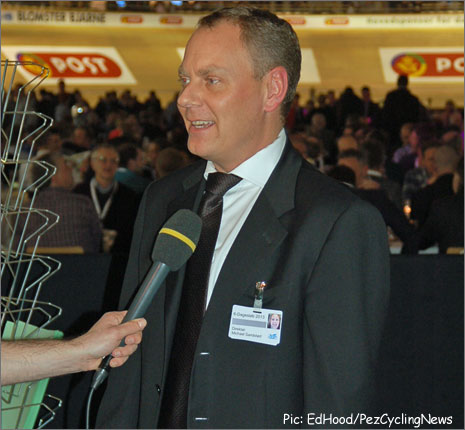 Michael Sandstod has always been a joker – but now he’s race organiser he has to be a bit more serious about life.

Another good pro, he was a multiple Danish National Champion on road and track. He was robbed of a World Pro Points championship in 1996 when the photo finish cameras gave his points in the final sprint to a lapped rider – silver for Michael, gold to Juan Llaneras.On the road he won the Four Days of Dunkirk and Tour of Picardie

He’s not as spiky as Jimmi and a smile is never too far away. 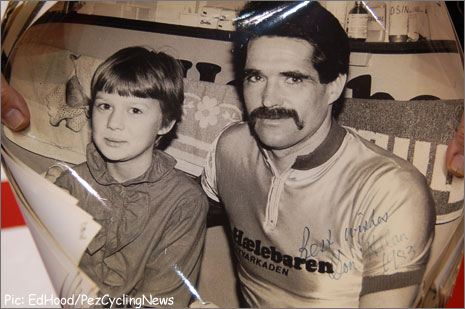 One wee moan about the organisation, our chum Grith and her dad have been taking photos at this race for years – here she is with Don Allan, back in 1983 – but the new organisation wanted to charge them to take pictures, this year.

Not cool, in my view. 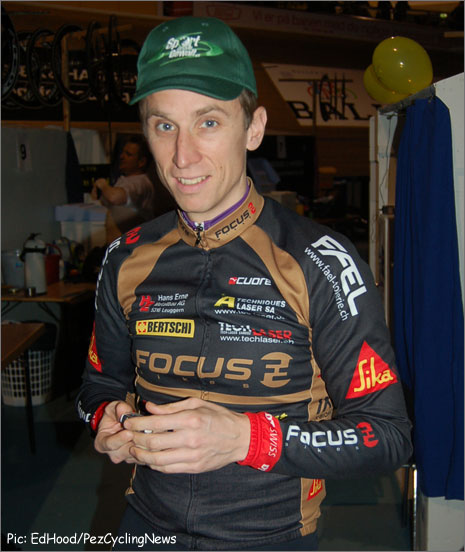 I was getting ready for the last chase when Alex Aeschbach wandered past and stopped for a chat; ‘this is the last time I’ll ever set my computer at the start of a madison,’ he said. Alex was there at my first six, here in Copenhagen and always has time for me.

A winner of six days in Fiorenzuola, Grenoble, Moscow and Stuttgart, the peloton will be the poorer for his retirement. 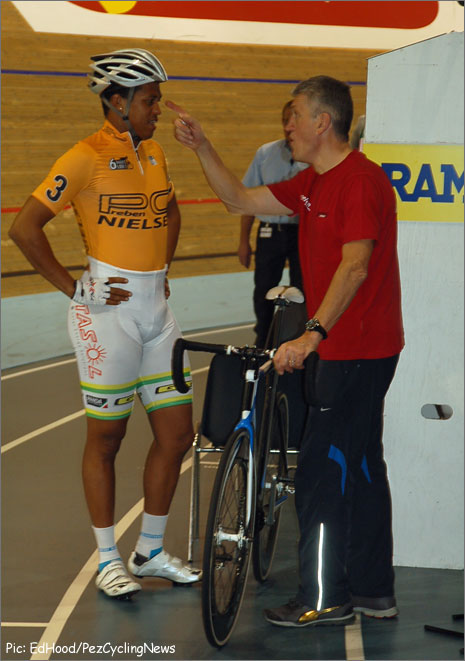 South African Nolan Hoffman is the first coloured rider to become a regular on the winter boards since English legend Maurice Burton, 30 years ago.

Hoffman took silver in the World Scratch Championship in 2012 behind Ben Swift and has been working hard to become a regular on the circuit. Affable and approachable, he’s another one of the ‘good guys.’ 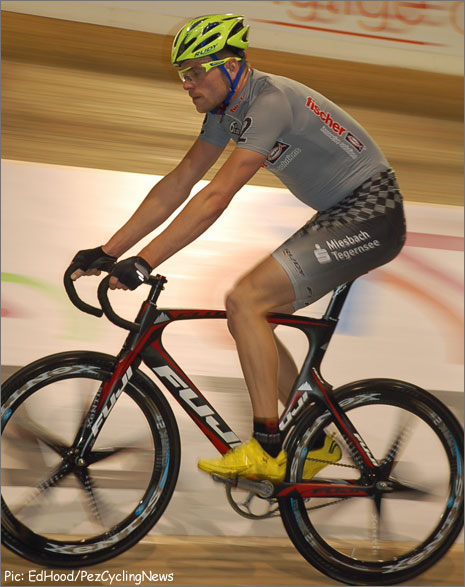 I was pushing Robert Bengsch off in a race once, he looked down at me and advised; ‘with power!’ The original, big, strong, quiet boy, this was his last race, despite being only 29. With Marcel Kalz, a dynamite duo in the time trials; we’ll miss him. 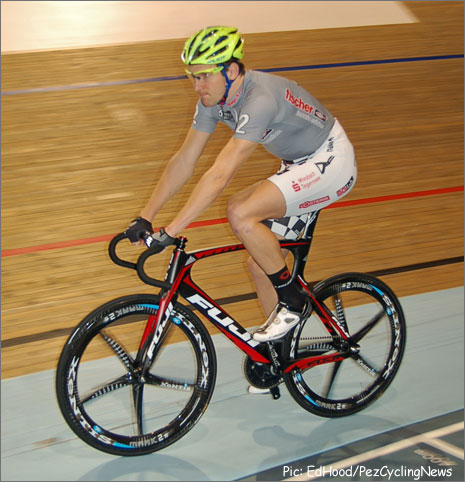 Marcel Kalz twice broke the Copenhagen track record, leaving it at 12.51 for the 250 metres. That’s 10 dead for the 200; during a Six Day – albeit coming off one of Bengsch’s arm dislocating slings. And he won the Bremen Six Day with Franco Marvulli.

Next up he’s going to pilot a blind tandem in a bid for Worlds and Olympic honours. Scottish Para-Olympic champion tandem steersman, Craig MacLean had best keep an eye on the tall German. 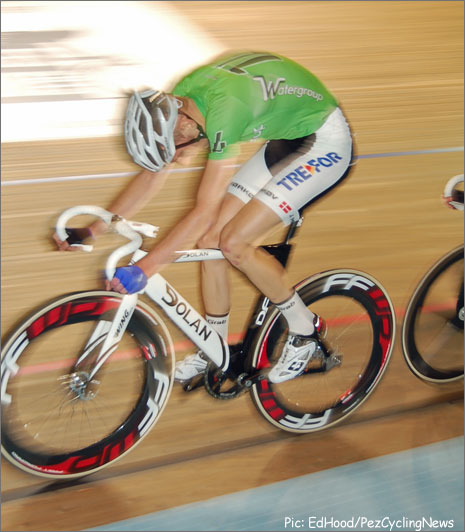 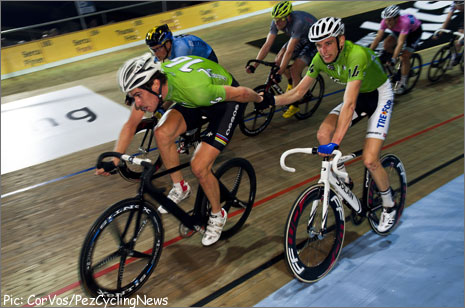 Jesper is building a rep as a man who’s at home behind the Dernys – witnessed by second spot in the European Championships behind David Vigano. Morkov and Morkov to win in Copenhagen, one day? 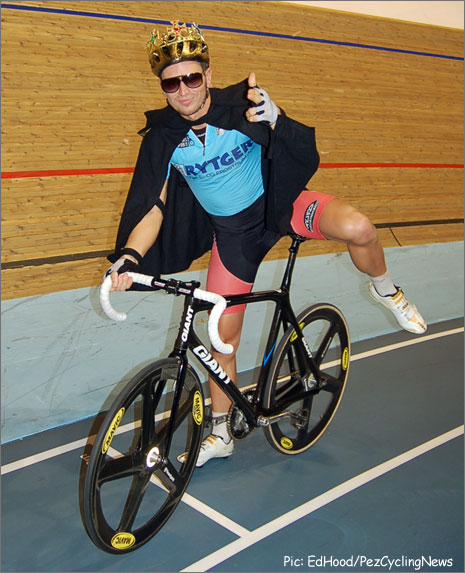 ‘Back in the day,’ Willy De Bosscher was the ‘Clown Prince’ of the six days – ruling the eliminations with his red card and whistle. Pointing at his victims and raising the red card without even looking at them.

He was a great entertainer.

Marcel Barth dons a crown and cape to lead the ‘balustrade’ sprint where he leads the string around the fence as Dario G’s ‘Sunchyme’ – the crowd like it . . .

But Willy’s position as the six day circuit’s best ‘funny man’ is safe. 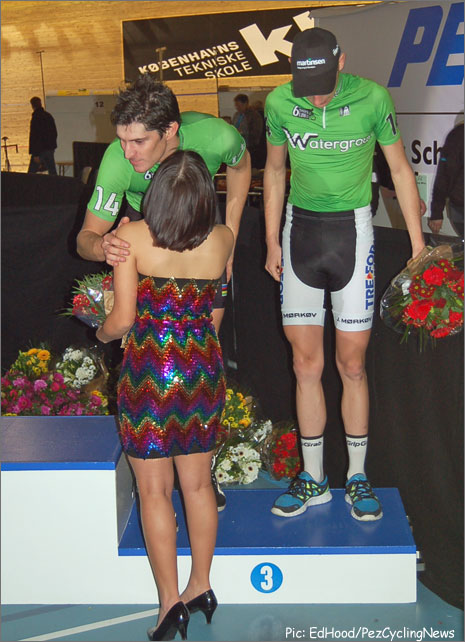 Franco Marvulli is still the most successful rider on the six day circuit with 33 wins off 117 starts, according to my calculations; with next most successful rider, Robert Bartko way back on 19 wins. He’s lost count of podium finishes but there are four world titles, five European titles and an Olympic silver medal, too.

The motivation isn’t perhaps as strong as it once was, but he’s still one of the very best on his day – he was third here in Copenhagen – and is never far away from where the pretty girls are to be found. 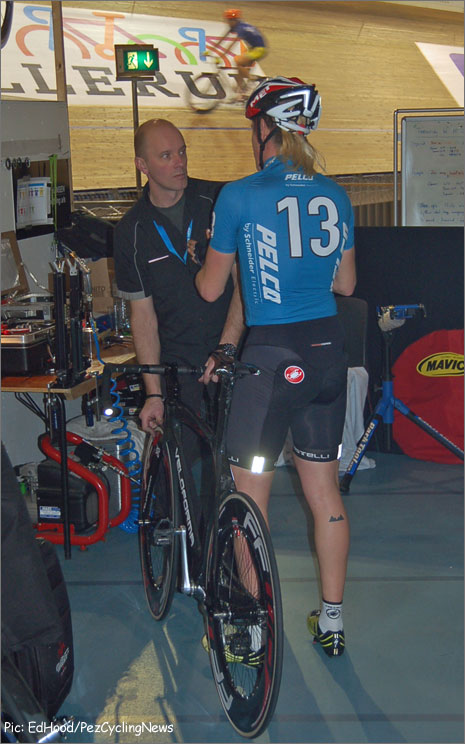 Dirk Dekeyser, our mechanic is the pro’s pro; I’ve never seen him flustered through crashes, bike changes or punctures – real or imagined – and he always has the right part somewhere in one of those steel trunks. 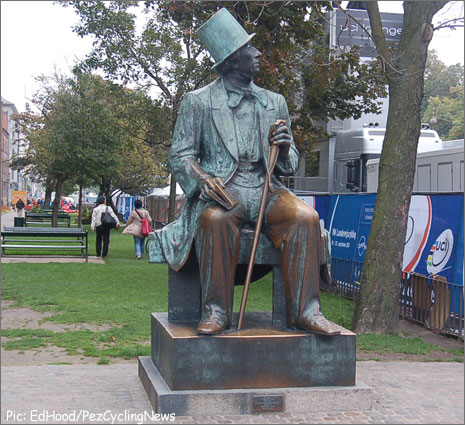 We started with the Little Mermaid, so we’ll close with her creator and Copenhagen’s most famous son, Hans Christian Andersen. But we’ll make no correlation between bike races and fairy tales – that used to be Lance’s job.