Today the first ever Women’s edition of the Polish stage race took off from Zakopane.

It would seem that the Tour de Pologne Women has already found its Queen. Her name is Jolanda Neff. After Tim Wellens’ triumph yesterday in Krakow, the Tour de Pologne caravan went back to the Tatra Mountains where the first edition of the Tour de Pologne Women officially opened in Zakopane. There were 77 athletes in the race, riding for 14 teams. The entire race will cover 3 stages in two days. Switzerland’s Jolanda Neff won the first fraction, covering 100 km from and to Zakopane on the challenging circuit that was already the scene for the men’s race last Saturday. 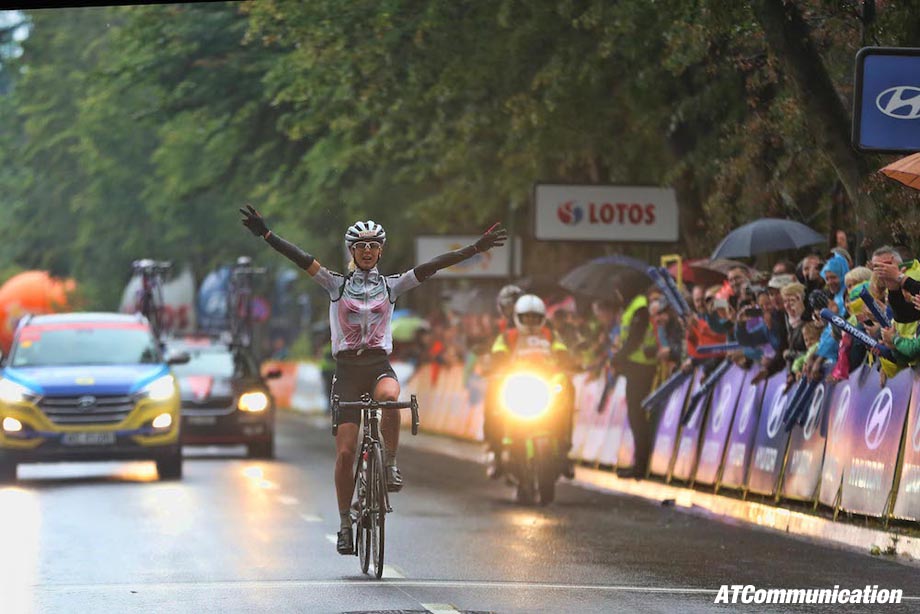 The day’s program for the athletes planned 2 laps (2×50 km) on the circuit in Zakopane. Unfortunately, even today it started raining in the first few kilometres of the stage. The race started to heat up right away, with the pack getting split into two parts, headed by a lead group of about 20 athletes. Among these was the Swiss Neff, who proved she has an extra gear up her sleeve on uphills. Right from the very first climb, she left her team mates and the rest of the attackers behind, taking off on a solo flight. The forcing by the Swiss athlete continued like a freight train in the last lap as well. She kept up a rhythm that allowed her to maintain a discreet advantage over her pursuers, in spite of a tumble she took on a downhill stretch, which forced the Swiss Miss to substitute her bike, costing her about 20”. The joy of victory is hers, and she has captured the first Lang Team yellow jersey in the history of the Tour de Pologne Women. Brazilian athlete Flavia Oliveira (BTC City Ljubljana – Mix) also put in an excellent performance, classifying second behind Neff. Lithuanian cyclist Rasa Leleivyte, who is the colour bearer for the Italian team Aromitalia-Vaiano-Fondriest, closed out the fraction in third place.

Jolanda Neff didn’t just clinch victory in the stage to don the yellow jersey. In this Tour de Pologne Woman this remarkable athlete, who is racing for the Swiss National Team, also captured the Hyundai white jersey in the classification for best sprinter, the Lotto blue jersey as the most active rider in the pack and the green jersey (Powered by the Sports and Tourism Ministry) for best climber. The best Polish athlete is Ewelina Szybiak from the Polish National Team. 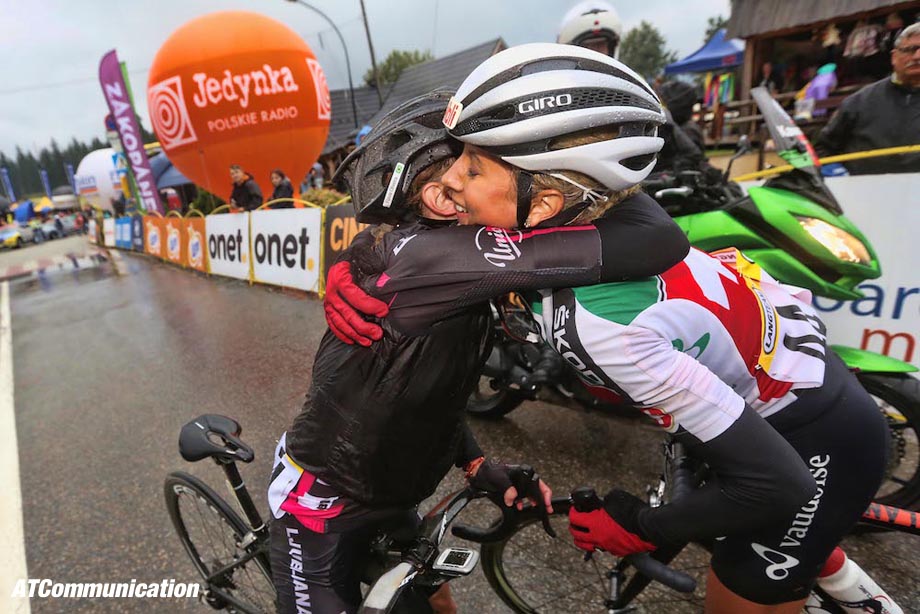 Tomorrow will mark the grand finale in the Tour de Pologne Women. In the morning the cyclists will challenge one another in the 4 Km climbing time trial from Buwowina Tatrzanska to Bukovina Resort, while in the afternoon the third and final fraction will take place on the Bukowina circuit (Km 78). This is where the men were supposed to compete on Sunday, but the stage was cancelled due to foul weather conditions. 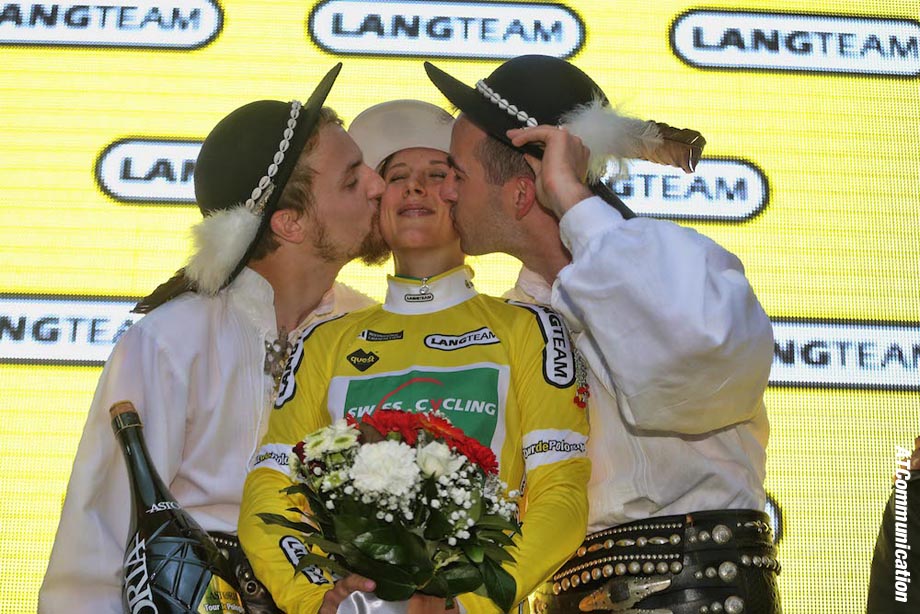 “I didn’t plan on being all alone that early in the race; after the first downhill I was suddenly solo and I had a gap of 40 seconds, so we were not sure if I should ride or if I should wait, but then I reached a good speed and suddenly the gap was a little bit bigger, so then at a certain point we decided I should just go for it. I did have a crash in the downhill; it was quite slippery, so I went down. I think I lost about 20 seconds but luckily I still had a gap and I worked hard until the finish to increase it a little more, which I think is important for the general classification. Today I have to recover very well because it was a hard stage, a long stage with rain the whole time, so it’s important to recover well, because we have two hard stages to go tomorrow. There are only 19 days to go until the Olympic Road Race in Rio. This is my final preparation, my final race before Rio and yeah, I’m very happy that I can be part of the race here, the Tour of Poland. I’ve ridden in the rain before, it wasn’t a problem; I am familiar with rain and with cold weather, so that was fine and it was great that we could ride here. I really like the organisation and I love the track, I have never ridden such a hilly race before, so that was really cool,” says Jolanda Neff, who is here in Poland to prepare for the Rio Olympics, in which she will be a major player both in the MTB-Cross Country race as well as the on road cycling test. 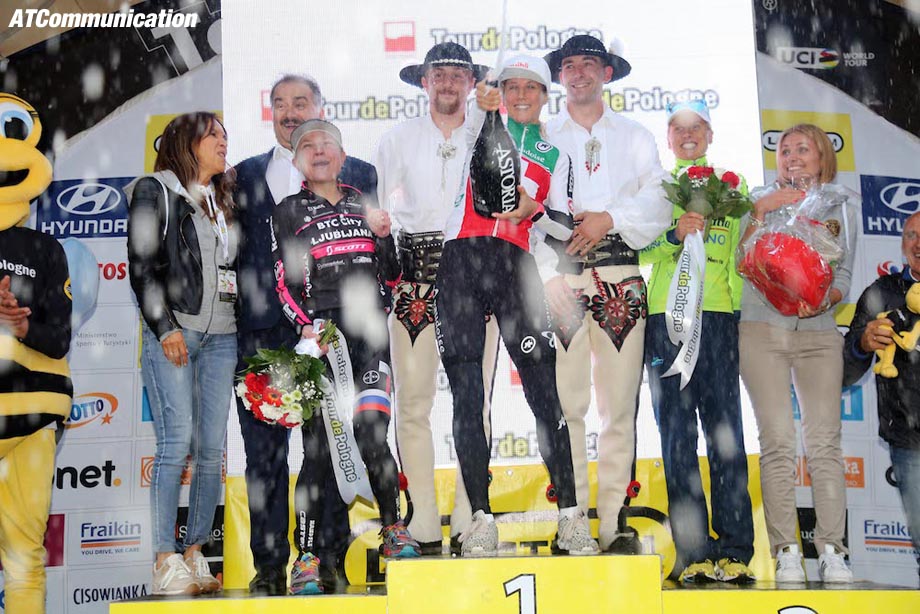 In fact, Neff is a multi-talented athlete; in addition to her on-road Swiss National Title in 2015, her portfolio also holds 3 under 23 Cross Country World Titles and the Marathon World Title she won in Laissac (France) in June.