Plus, does Arnaud de Lie's win at Valenciana means we have a new young superstar?

Race Breakdown: With the racing now coming thick and fast from all over the globe the past few days (Tour Down Under, Benidorm CX World Cup, Vuelta a San Juan, Clàssica Comunitat Valenciana) it could be a little difficult to know exactly what to focus on and what it all meant. 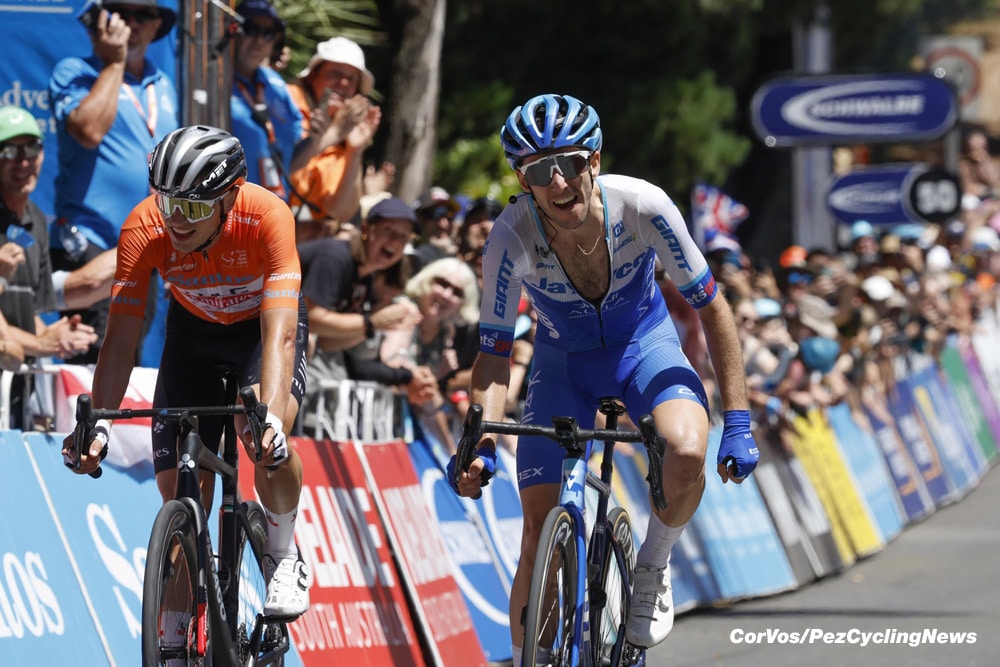 So, since watching all of these races is a tall task for anyone who has a life, I’ve pulled out the main takeaways from the last few days of racing below:

Stage 4
77km: As we saw previously in the week, the peloton was splitting up in the crosswinds a long way from the finish line. With sprinters like Phil Bauhus and Kaden Groves stuck in the second group, an all-out all-day pursuit was created by the teams trying to get them off the back.

52km: The chase group was able to keep the lead peloton in their sights, but couldn’t close the gap despite being stuck at an excruciatingly close distance. This pursuit created an extremely hard pace and sapped the legs of the top sprinters in the front group.

200m: When they got to the line less than hours after the start, we see the fatigue in the group when Bryan Coquard launches his sprint incredibly early on the slightly uphill finishing ramp and goes completely unmarked up the left side of the road.

Finish: After getting the early gap, nobody comes close to shutting down the move and Coquard is able to grab the first WorldTour win of his 10-year career.

Stage 5
1.8km: On the final stage, after another day of hard racing, Simon Yates, who is trailing Jay Vine for the overall lead by 15 seconds, attacks on the final climb to the finish line. Yates immediately gets a gap and is marked closely by Ben O’Connor, but, Vine, sitting in 2nd wheel while his UAE teammate is setting pace, doesn’t immediately respond, preferring instead to stay with his teammate.

1.7km: However, it takes Vine just a few moments to realize that Yates presents a real danger to his potential overall title and he somewhat easily joins the two leaders shortly after.

Finish: Yates shows his superior racecraft by besting Vine after the race leader opened up his sprint too early. The win gives Yates something to show for his great performances all week and the second place gives Vine the overall title and the first stage race win of his career. He also becomes the first rider to ever win the race overall without winning a stage along the way. 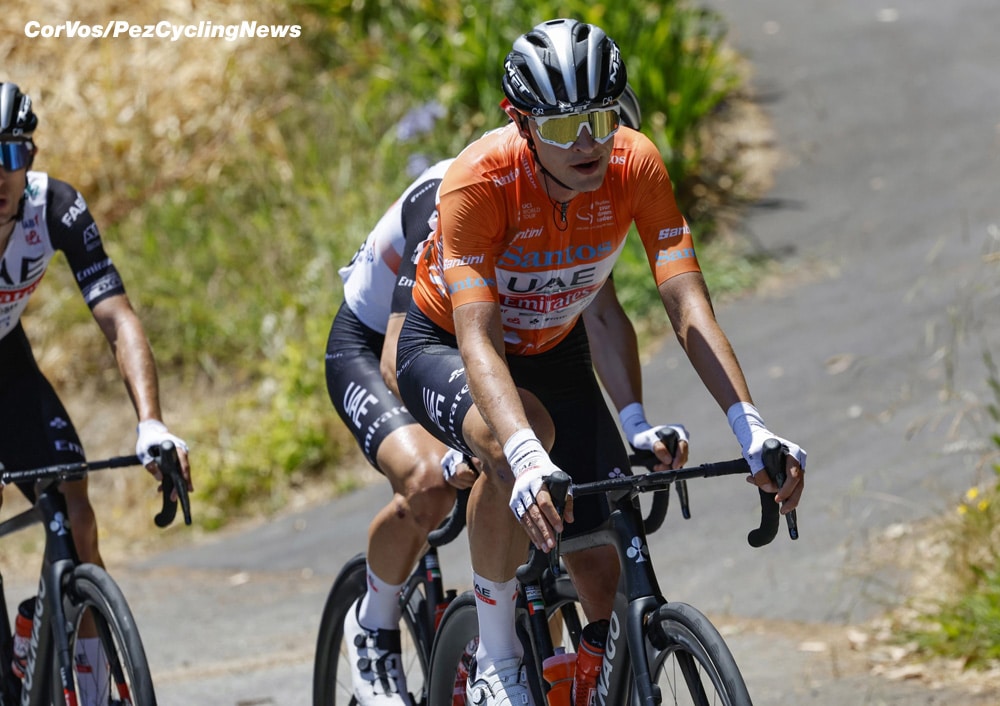 2) UAE has found yet another ace with Jay Vine 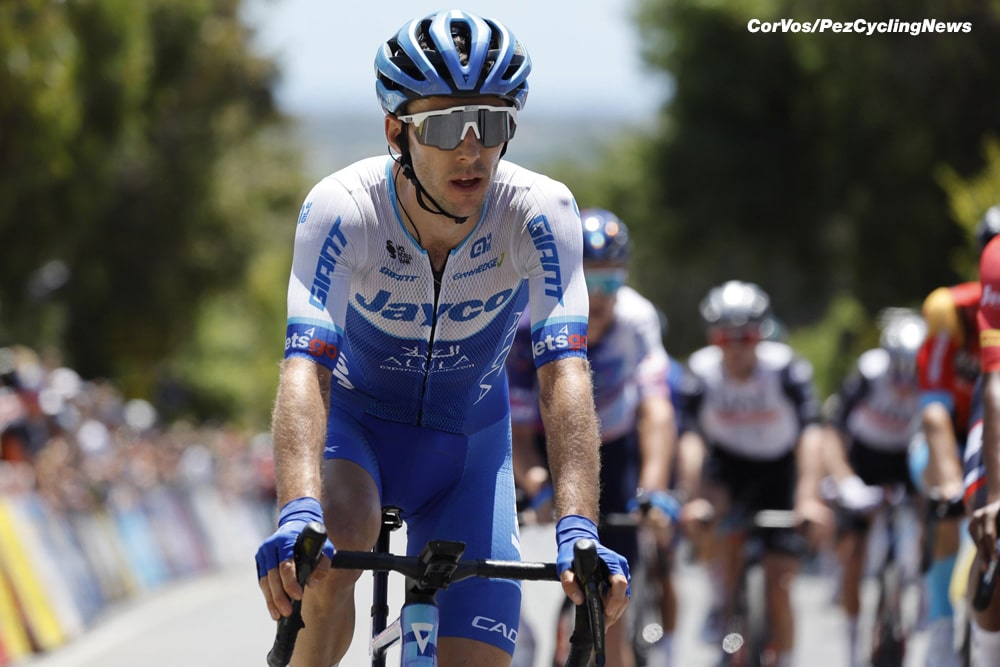 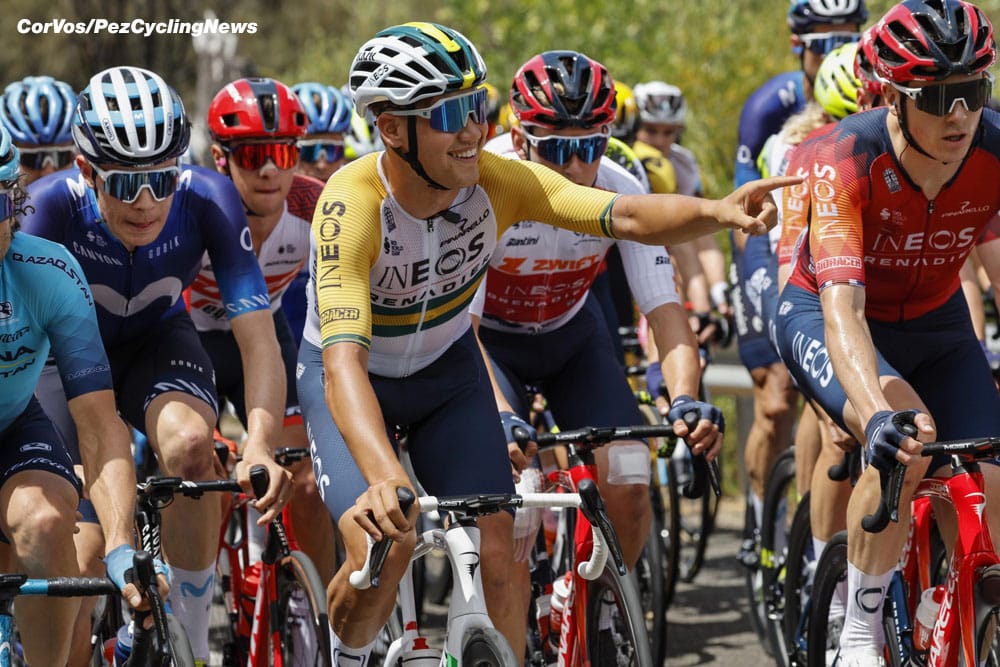 What were Ineos doing? 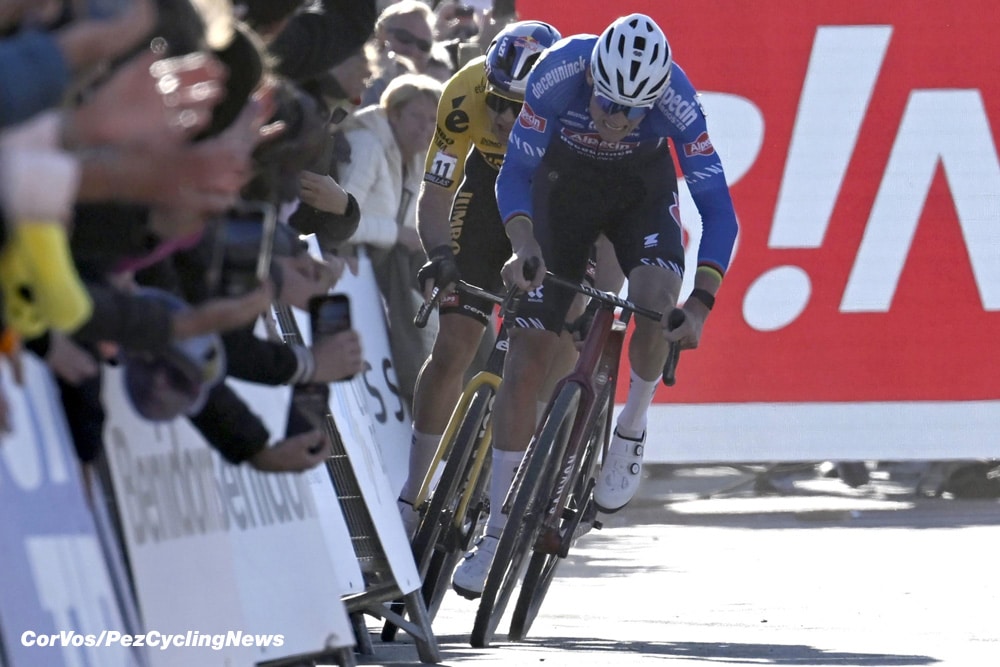 The battle is on for the cross World champs

Lap 4: Mid-way through the almost absurdly fast course, Mathieu van der Poel and Wout van Aert are stuck in a barely-controlled high-speed pursuit of one another at the front of the race.

Final lap: The fast pace has allowed Eli Iserbyt and Laurens Sweeck to stay with the leaders (but, notably not Tom Pidcock), but when we see Van Aert fly into a corner and overtake Van der Poel we know that this is clearly a race between the two big stars.

Later in the lap, Van der Poel repays the favor with a thrilling downhill overtake of Van Aert and all-but-wins the race when he locks his rival out of position at the right turn at the bottom of the hill. With few places to overtake between this and the finish, Van der Poel was able to hold off Van Aert for a much-needed win.

5) Mathieu van der Poel is back 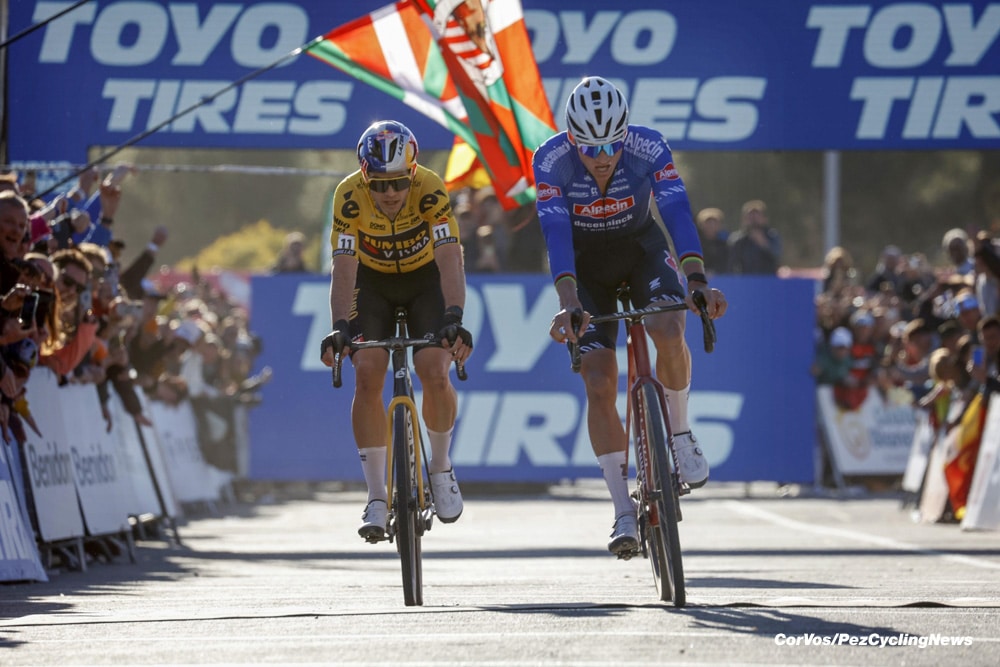 Fast and dry in Benidorm 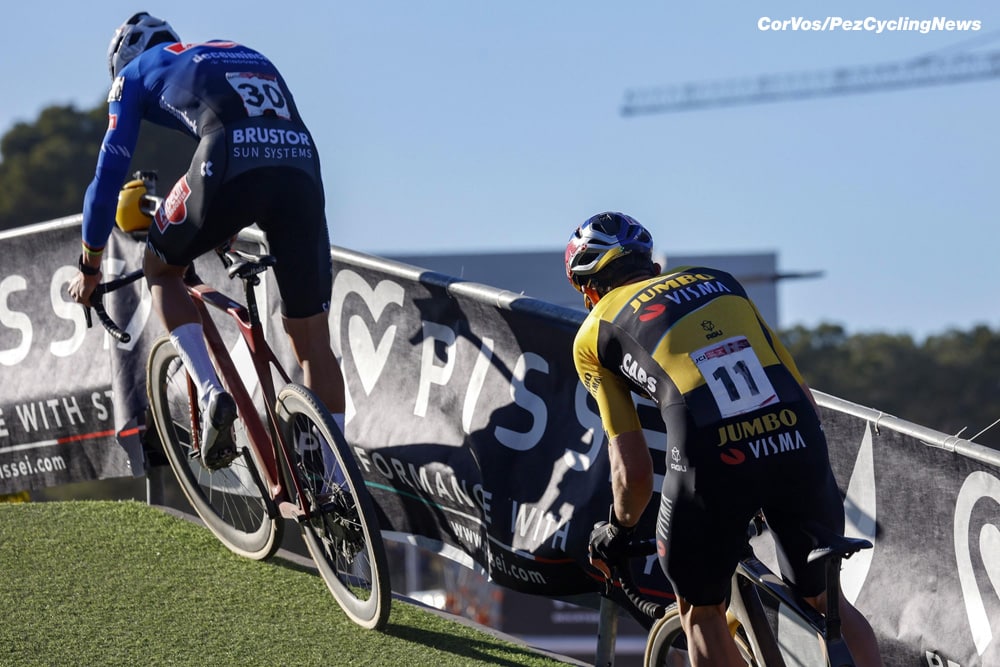 Van Aert and Van der Poel duking it out 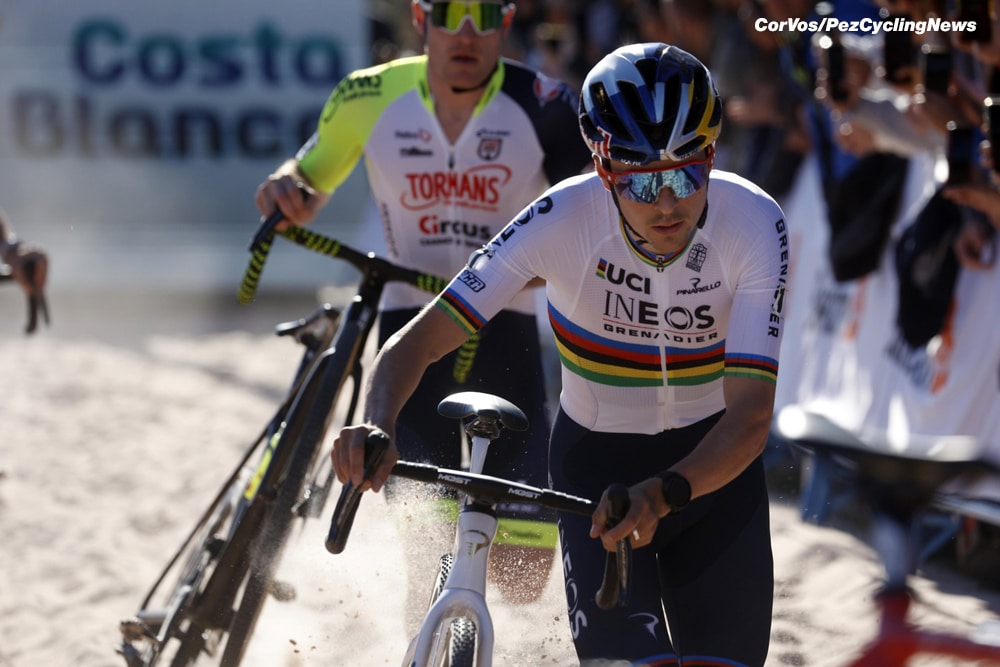 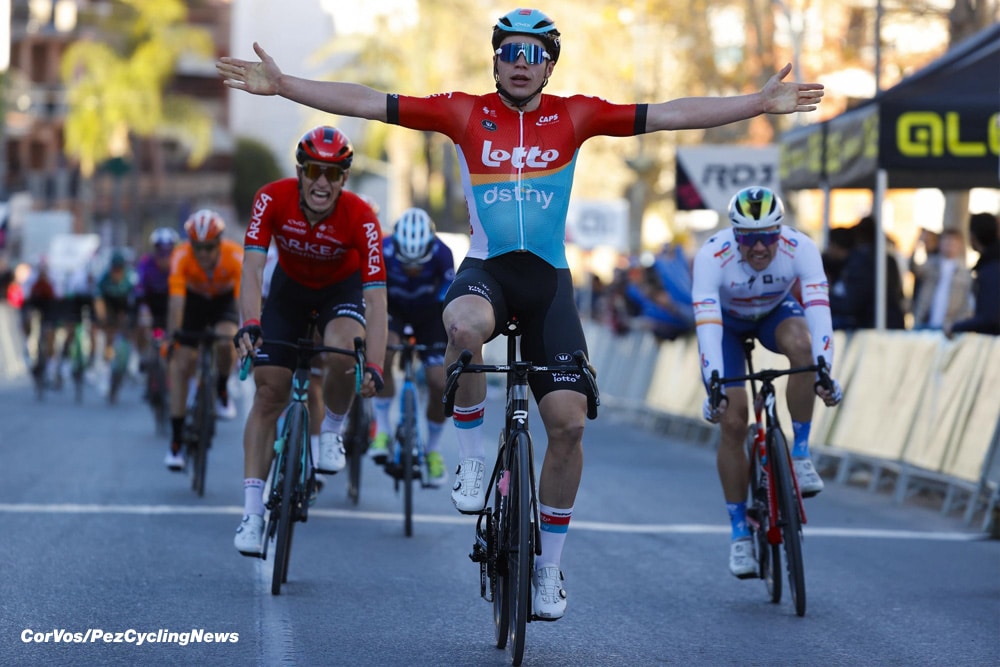 The new boy on the block – Arnaud De Lie