Race Report: Bob Jungels gave his Deceuninck – Quick-Step team a double celebration on Sunday as he emulated Zdenek Stybar to win Kuurne-Brussels-Kuurne. The Luxembourg champion took the initiative on the Varenstraat, and then dropped his escape partners in the finalé. He crossed the finish line in Kuurne solo. Owain Doull (Sky) was second, Niki Terpstra (Direct Energie) third. 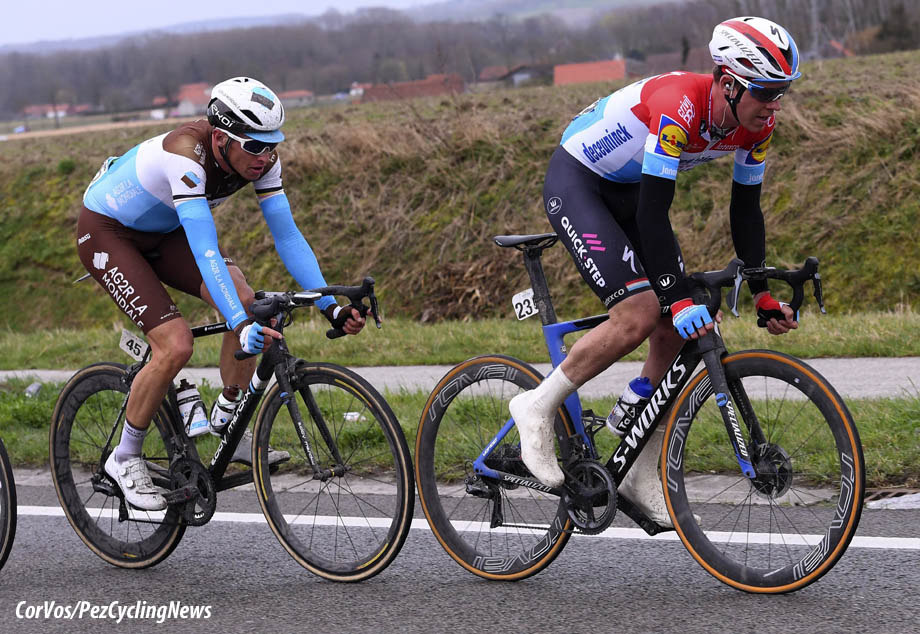 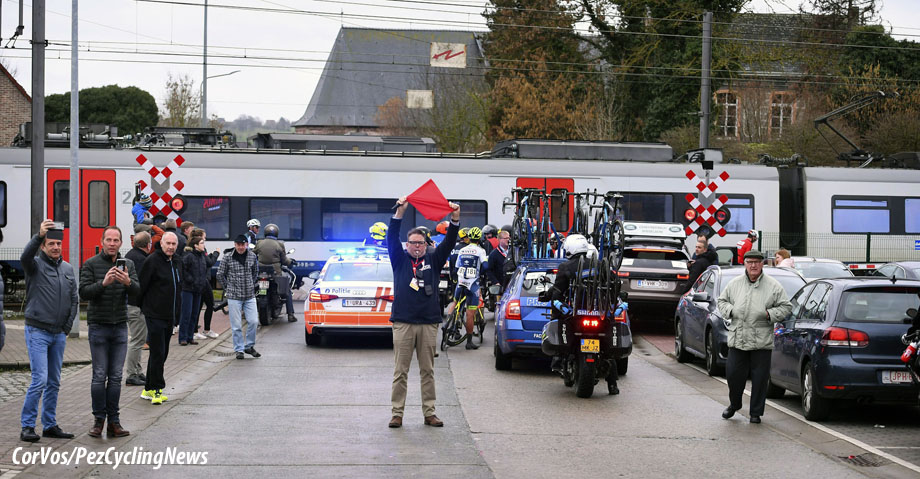 Deceuninck – Quick-Step was well to the fore on the Kwaremont with Asgreen, Lampaert, Stybar, Jungels and Sénéchal. A group of thirty including Danny van Poppel, Sebastian Langeveld and Jasper Philipsen crossed to the leading group. Fast men Dylan Groenewegen and Pascal Ackermann had missed the boat, which meant that their teams had go flat out in the pursuit of the leading group. 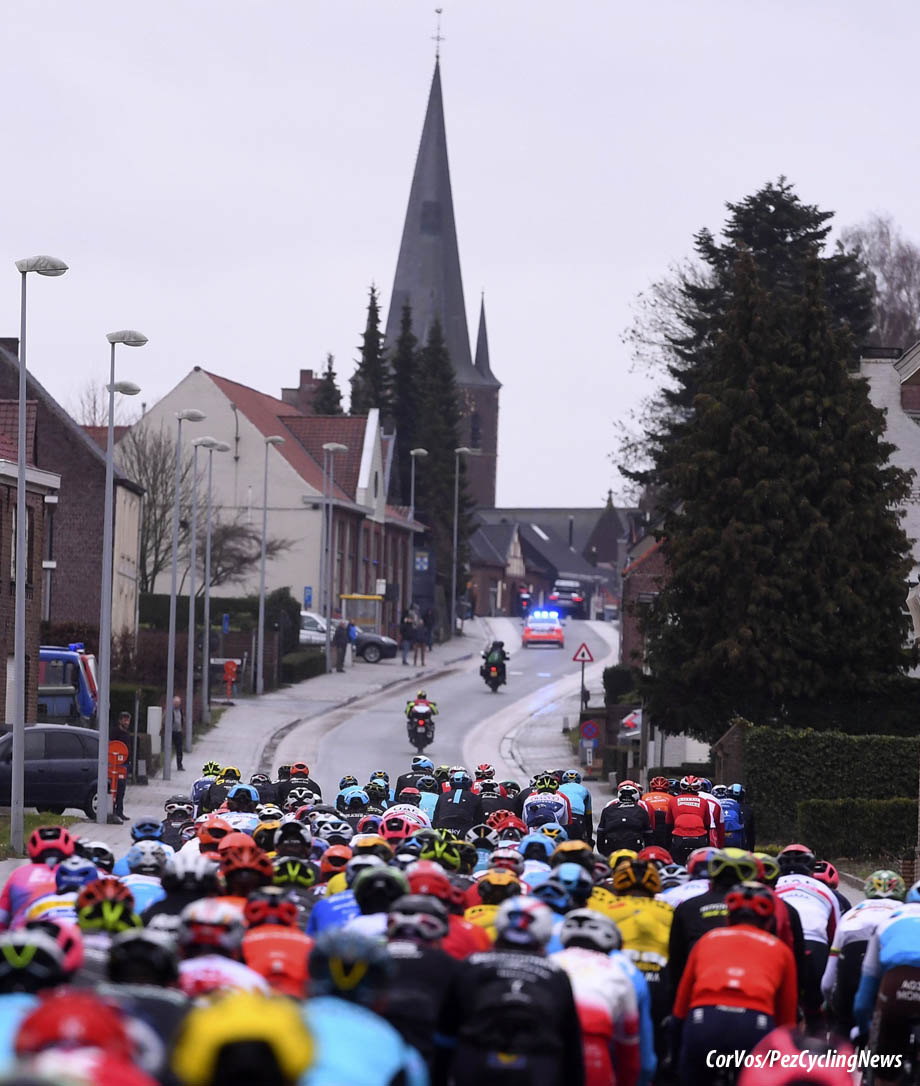 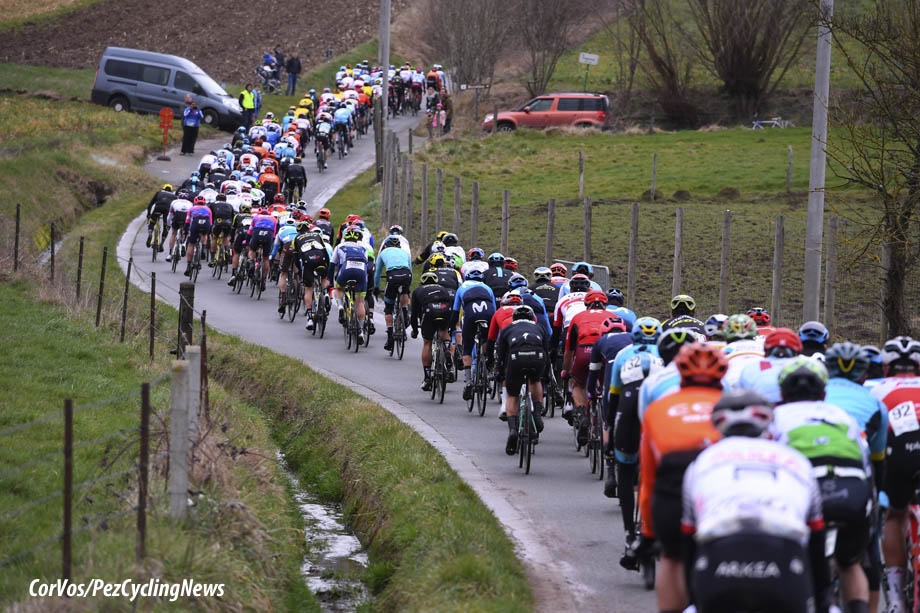 On the Varenstraat a leading group rode off the front: Jungels with Naesen, Langeveld, Ballerini and Cort. The Groenewegen peloton were within 1 minute of the five leaders with around 50 kilometres remaining. 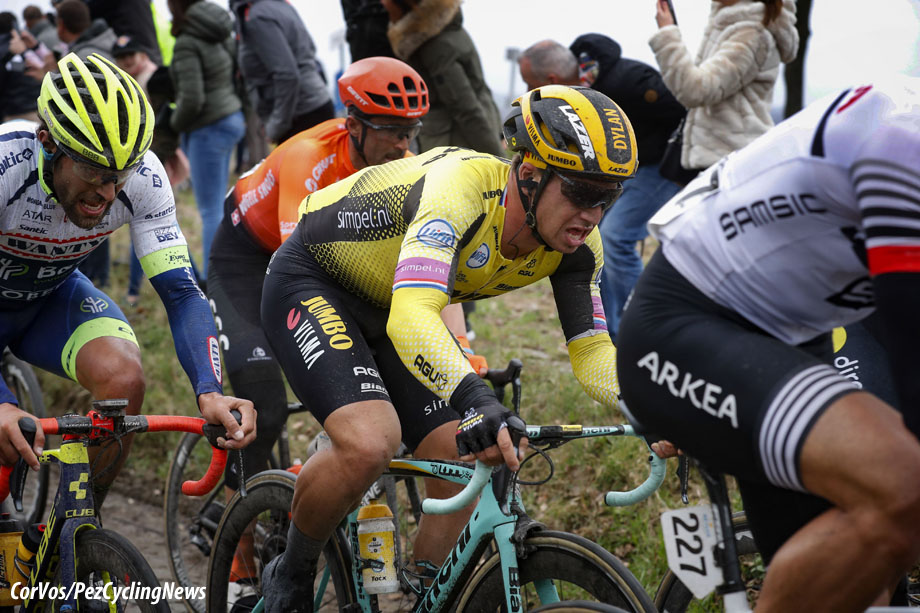 Despite Jumbo-Visma, Bora-Hansgrohe and Mitchelton-Scott chasing, the gap to the attackers did not get any smaller. The difference continued to fluctuate around the minute mark. The sprinters’ teams did not give up and halved the lead at the first lap of the finish in Kuurne. 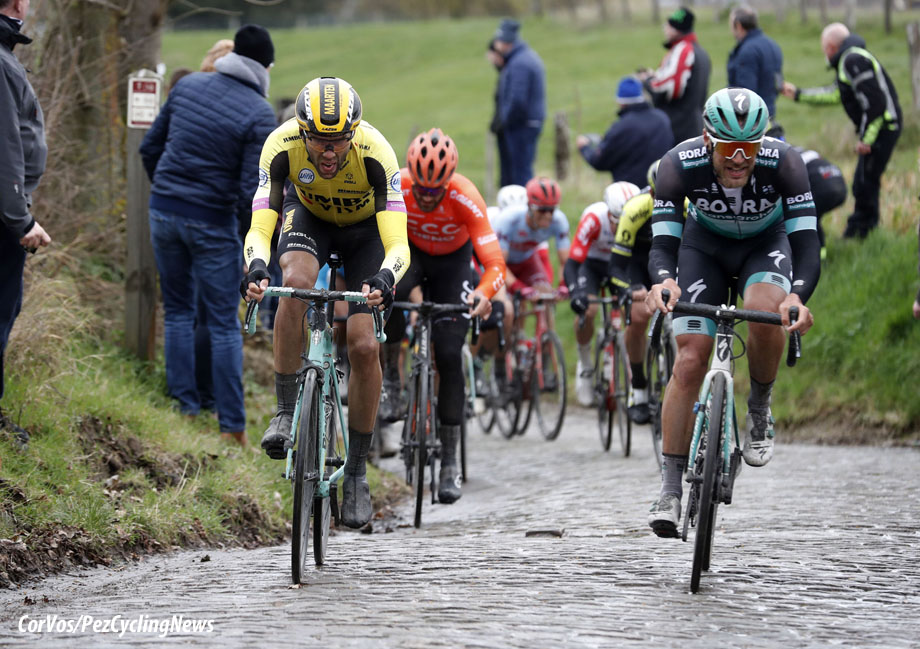 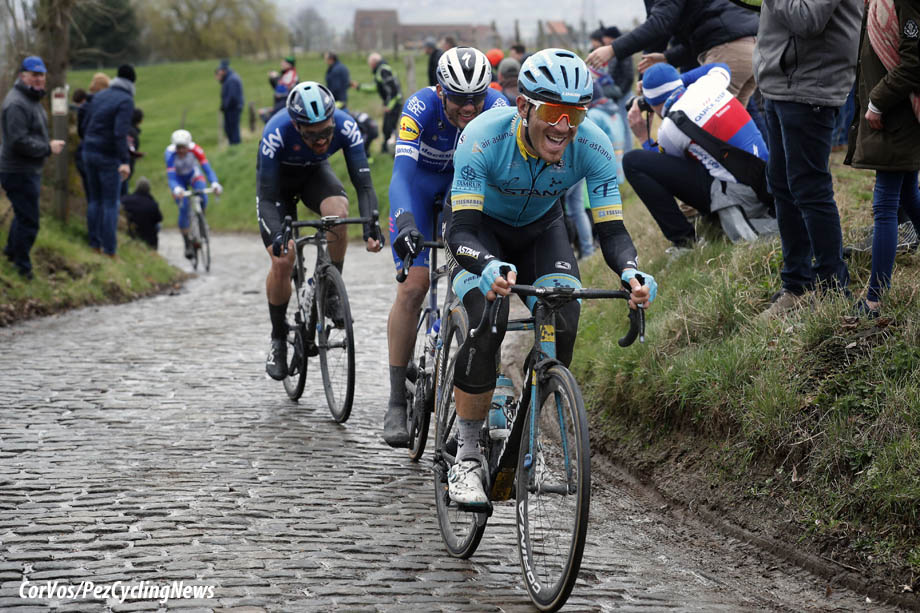 The wind was more than intense on the local lap of Kuurne. Partly as a result, and partly due to the high tempo at the head of the race, Cort was dropped. Soon after, Jungels decided to go for the solo. At the start of the last 15 kilometres his lead was 30 seconds. The Luxembourg rider was supreme and put everything into making his escape succeed. 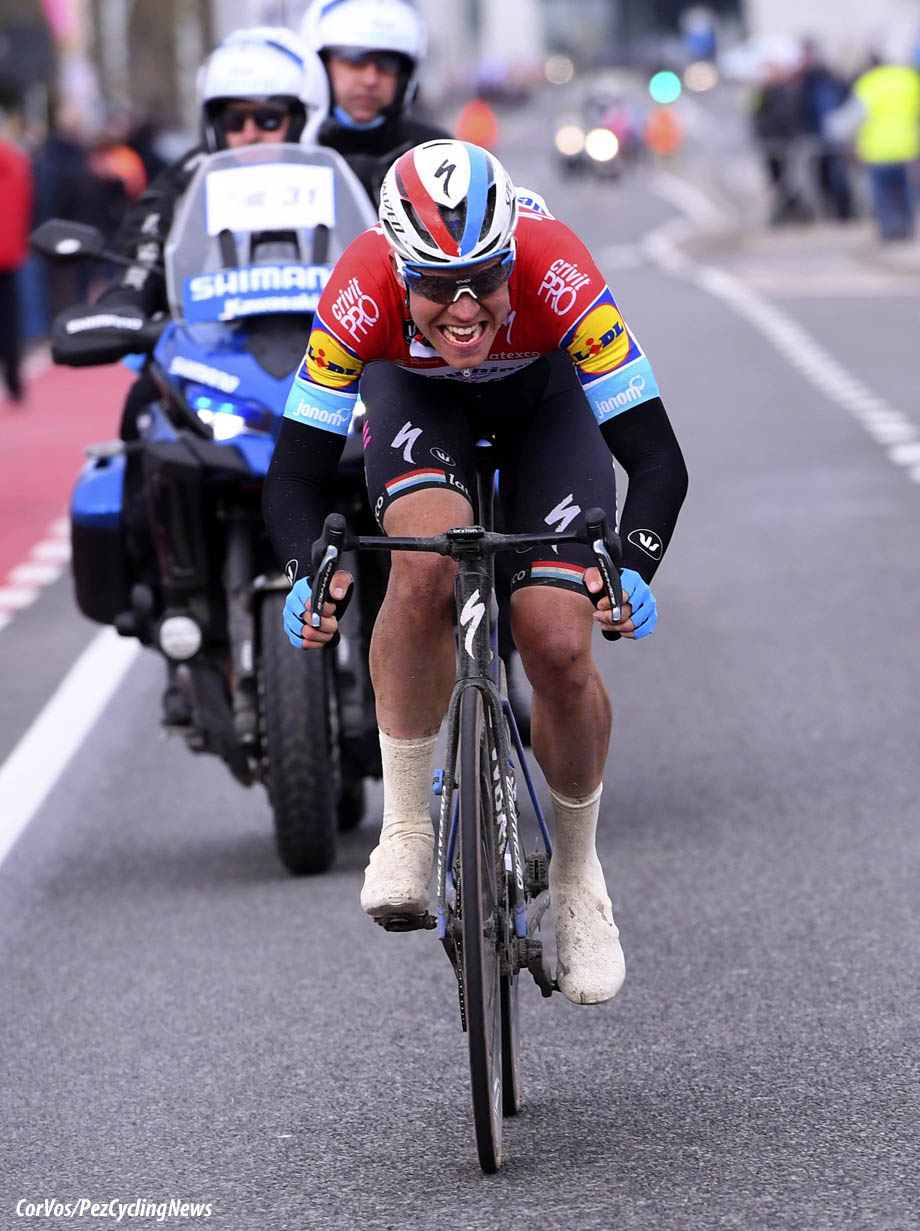 When his teammates from Deceuninck – Quick-Step started to disturb the peloton, the victory seemed to be Jungels’ for the taking, but the pace was still high in the pack. A counterattack from Doull, Terpstra and Keukeleire was countered by Lampaert, giving Jungels all the time to celebrate Deceuninck – Quick-Step’s second win of the weekend. 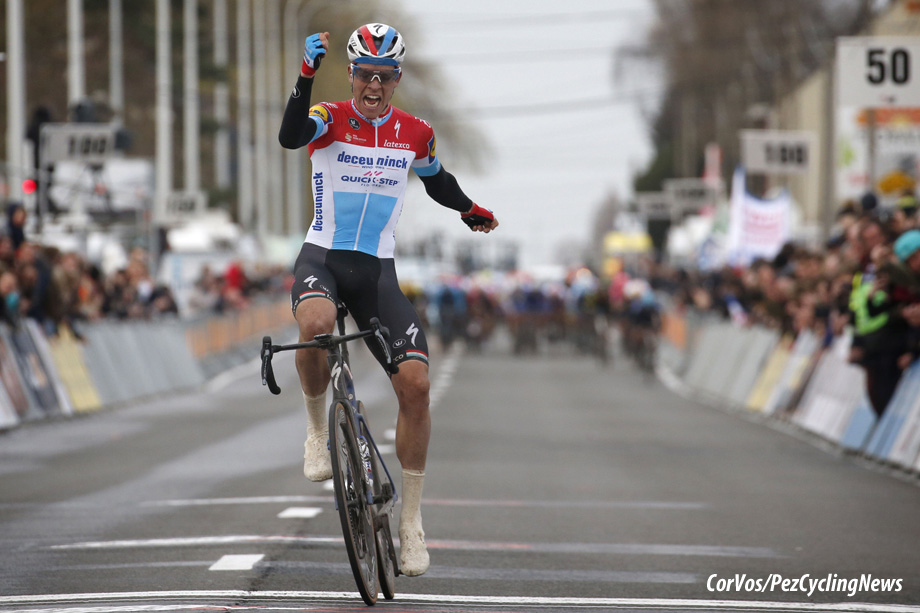 Doull crossed the line in second place ahead of Terpstra in third. Groenewegen just missed out on the podium. 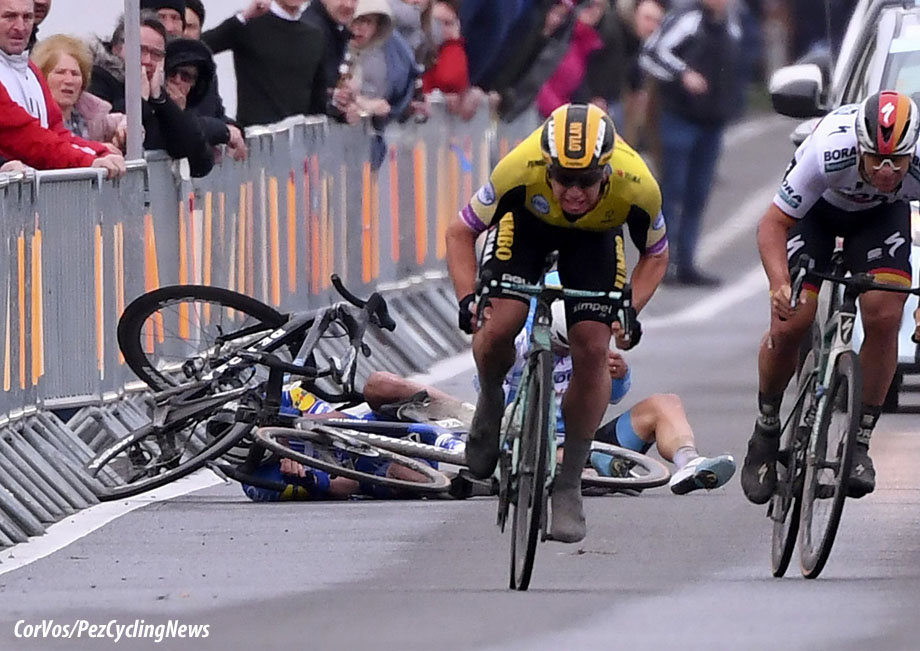