Vuelta Stage Report: Deceuninck – Quick-Step’s Philippe Gilbert won the twelfth stage of the Vuelta a España with a bold move in the final kilometres. Gilbert was part of a large escape group, the ex-World champion attacked on the steep Alto de Arraiz to solo to the stage victory in Bilbao. The peloton split with the top GC men finishing a couple of minutes after the Belgian for no changes in the overall. 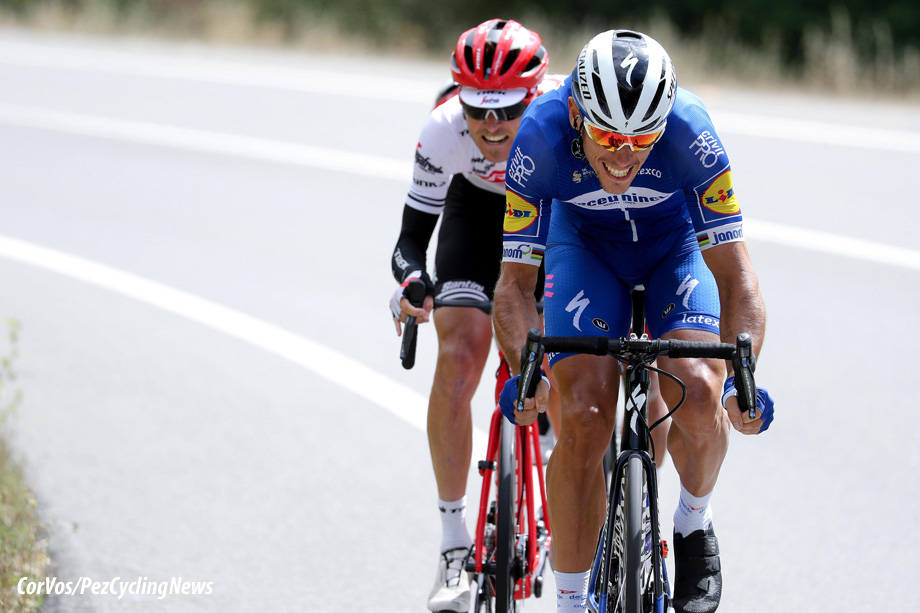 The perfect course for Philippe Gilbert

A very pretty stage, especially the final part. A string of three 3rd category climbs: short, steep and very close together, they will bring excitement to a stage finish that is expected to be highly dramatic, and where we will be enveloped by the Basque Country’s unrivalled love of cycling. 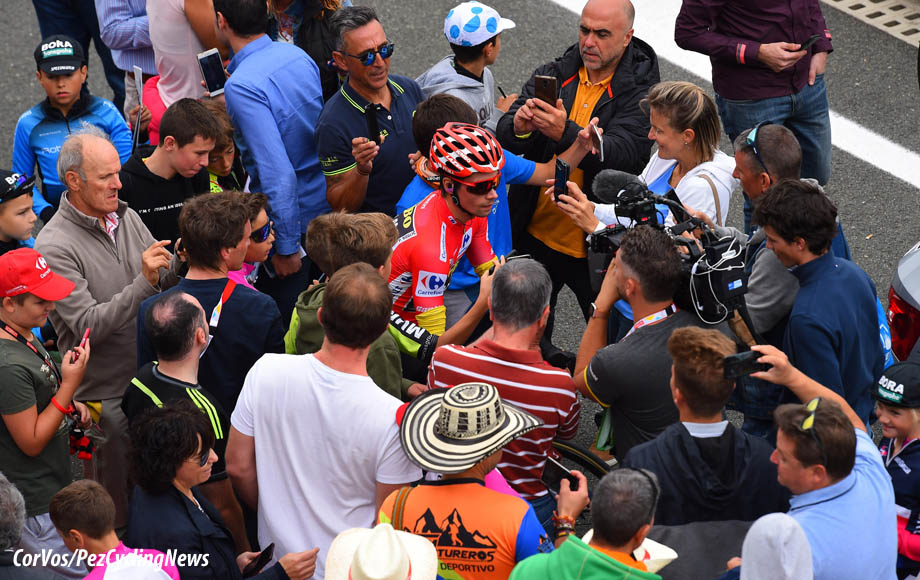 Overall leader, Primoz Roglic, was popular at the start 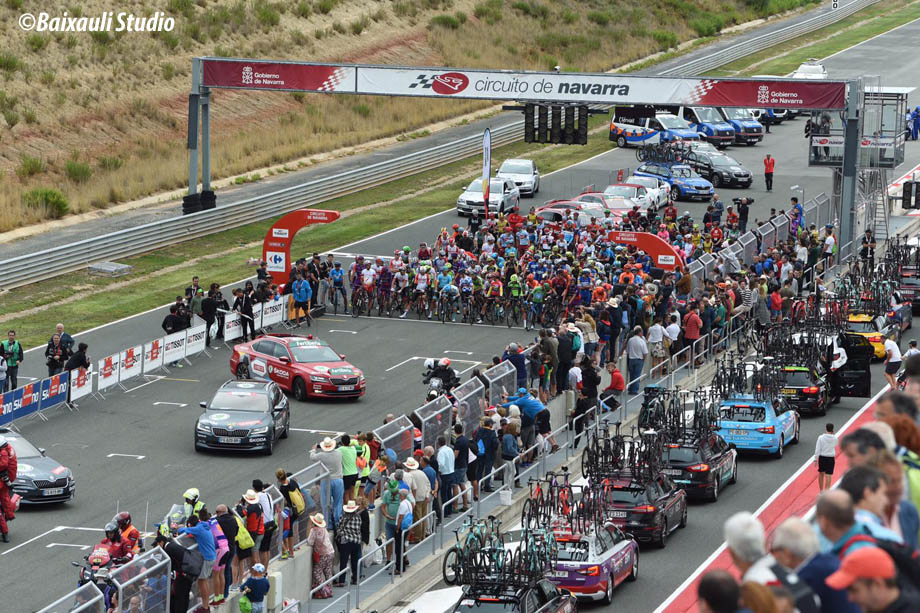 After Euskadi-Murias’ surprising victory by Mikel Iturria in Urdax, not far from the Basque border, Wednesday’s stage was going to be special for the ProContinental Basque team. Stage 12 finished in the industrial and economic centre of the Basque Country: the cycling city of Bilbao. 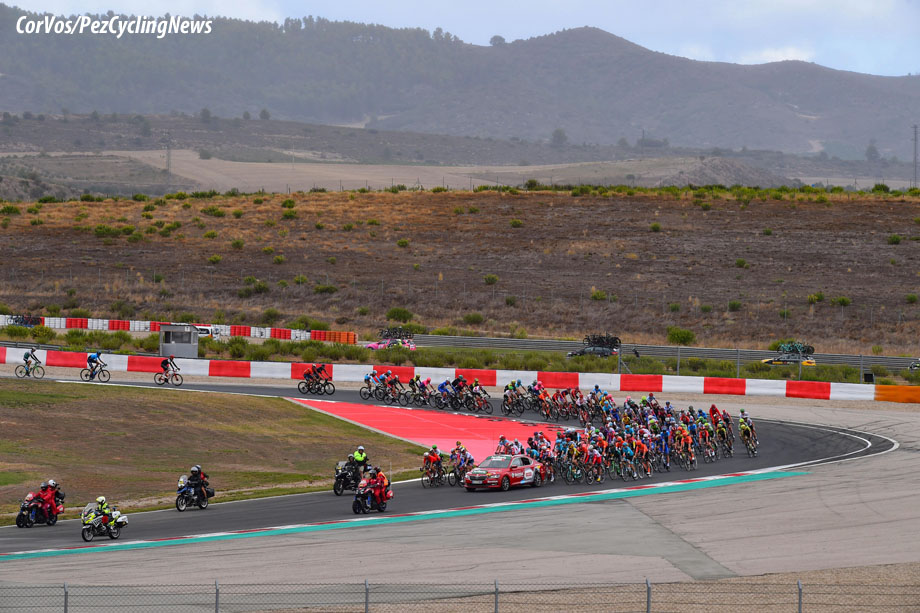 The race was neutralised on the motor circuit 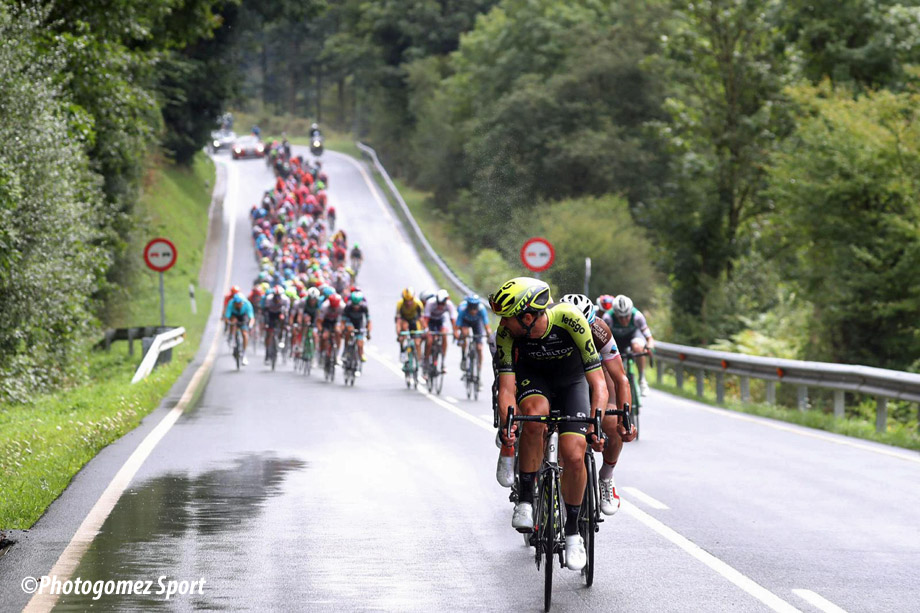 A fast and furious start for a furious stage
The stage promised to be difficult, with successive climbs of the Alto de Urruztimendi, the Alto el Vivero and the Alto de Arraiz in the last 40 kilometres. The winning move was bound to come on the very steep Arraiz, with ramps of up to 25%. First there was a furious start to the stage, as several teams tried to set up the early break. 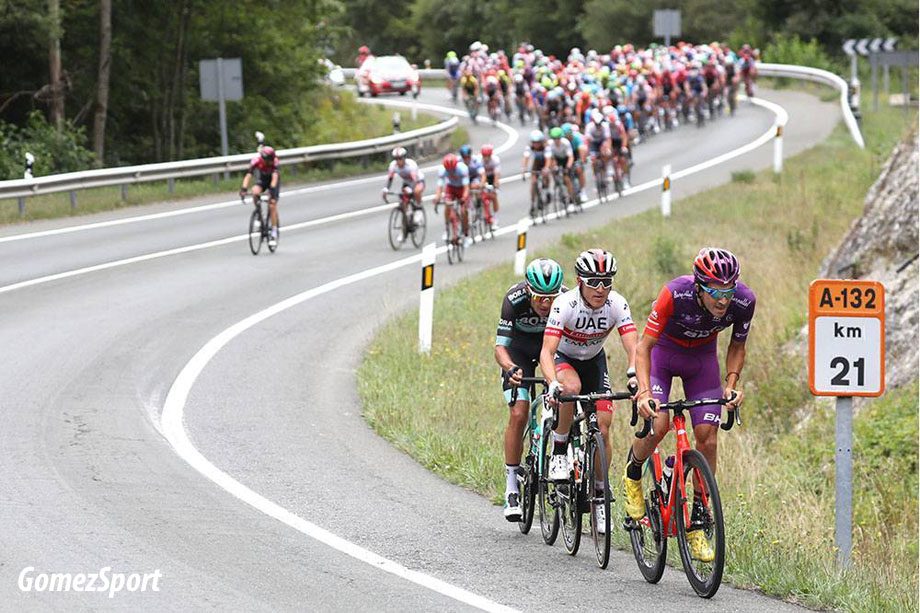 Burgos-BH also wanted in the break

As expected Euskadi-Murias was one of the active teams, but also Groupama-FDJ, Katusha-Alpecin, CCC and Ineos were attacking before the first climb of the day. No one succeeded and the peloton was together at the start of the Alto de Azazeta (4.9km at 3.9%). After a good ten minutes of climbing, Sergio Henao was the first to the summit, the Colombian took three points in the battle for the KOM jersey. 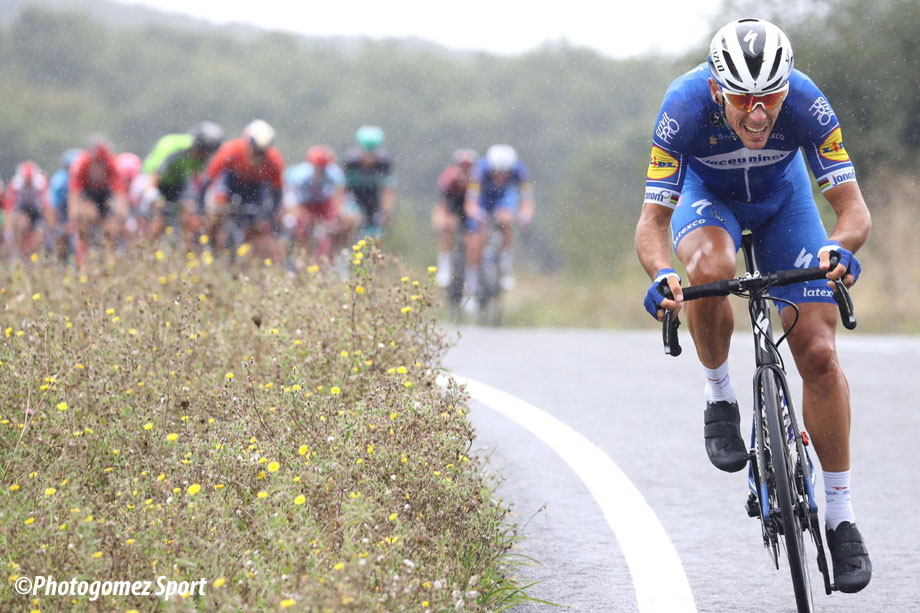 It was a course made for Philippe Gilbert

On the descent of the Azazeta, 22 riders managed to get away from the peloton, but this did not last long. After 100 kilometres there was still no ‘Break of the Day’, although Philippe Gilbert tried to initiate an escape, but every time the aggressive Belgian looked around his shoulder, he saw the peloton on his tail. Most teams saw the Deceuninck – Quick-Step’s classic specialist as the main danger, but it was Willie Smit who was the rider to gain a gap on the peloton. The South African from Katusha-Alpecin was quickly joined by 18 other hopeful riders. 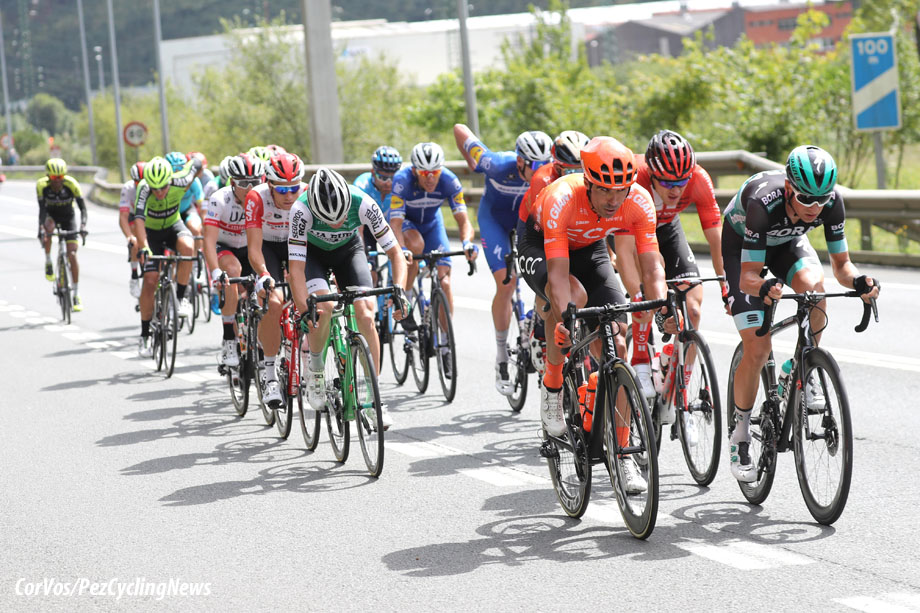 The peloton finally decided to take a nature break, which allowed the leading group to move ahead. Gilbert, Felix Großschartner, Tosh Van der Sande, Alex Aranburu and Nikas Arndt were the favourites for the stage win. The 22 leaders had more than 5 minutes on the Alto de Urruztimendi (2.5 km at 9.2%). 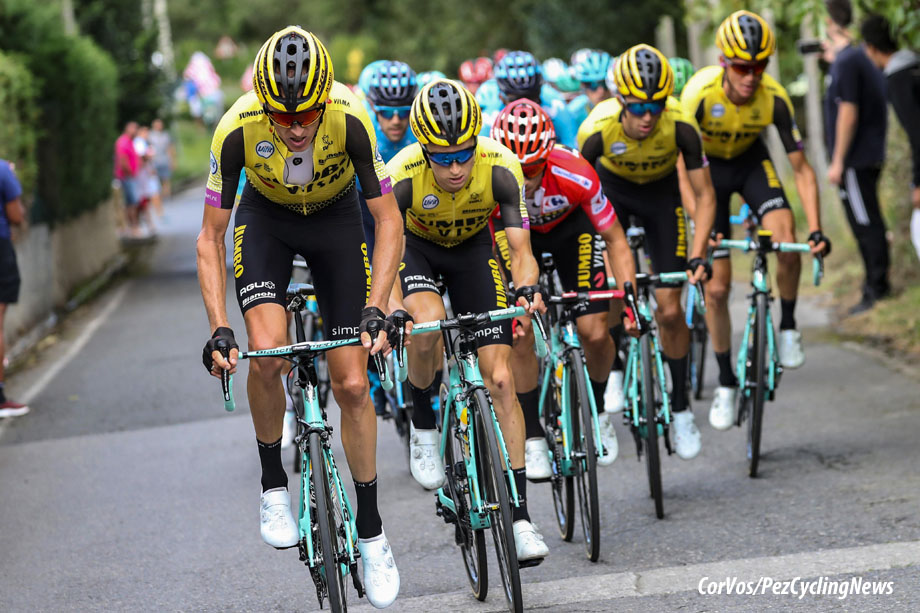 Gesink lifted the speed for the peloton

On the Urruztimendi – with ramps of up to 16% – the pace increased in the leading group, but the peloton sped up due to Robert Gesink for overall leader Primož Roglič. For many riders it was still too far out for a final attack, but this did not apply to Jonathan Lastra. The Spaniard – second yesterday in Urdax – rode away on the descent of the Urruztimendi. 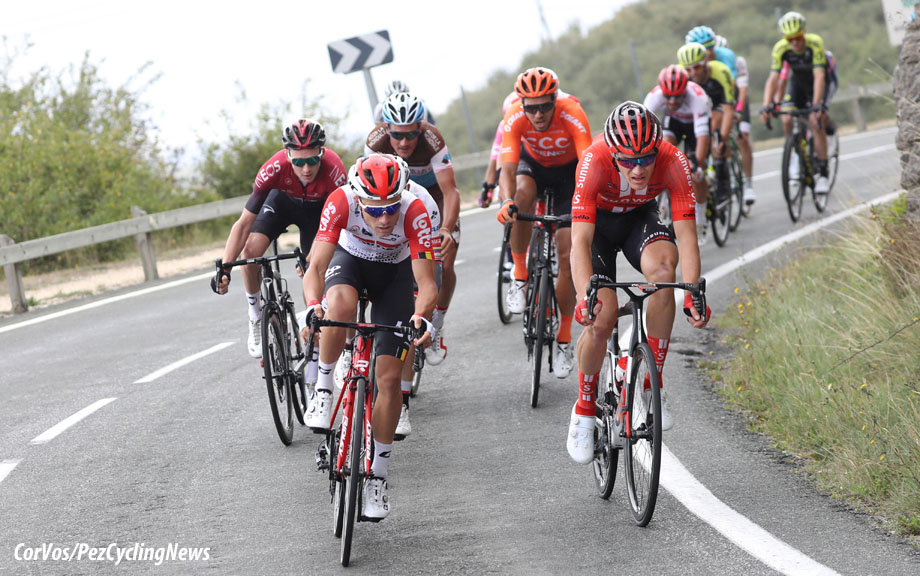 An Austrian and Ethiopian on the attack
The Caja Rural-Seguros RGA rider turned out to be an ideal target for Großschartner. The strong Austrian didn’t stay on Lastra’s wheel for too long. The Bora-Hansgrohe climber attacked the slope of the Alto el Vivero (4.3 km at 7.7%), but Großschartner was joined by the Ethiopian Tsgabu Grmay before the summit.

The others in the escape group couldn’t seem to keep the duo under control. The difference between the two front riders and the pursuers fluctuated for some time around 40 seconds, but the battle was not over, with the climb of the Alto de Arraiz still to come. On the flat kilometres before the final climb, the chasing group – including Gilbert and Aranburu – managed to get closer. 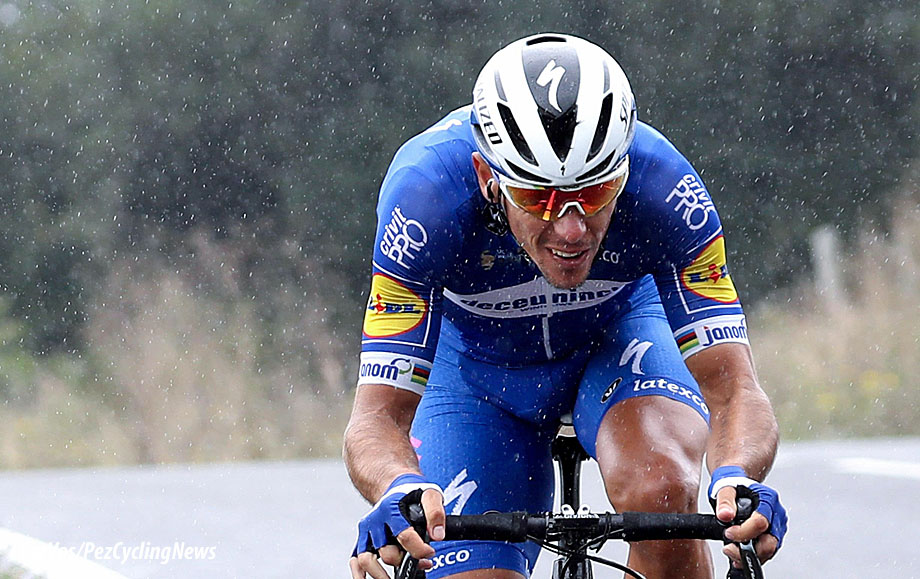 Großschartner and Grmay were still in the lead ahead of the daunting Arraiz (2.4km at 12.2%), but the difference was now less than 5 seconds. We were waiting for the first real attack, but the front riders clearly had respect for the particularly steep climb. At 1.7 kilometres from the summit it was Philippe Gilbert who made the decisive jump with two Spaniards trying to hold his wheel. 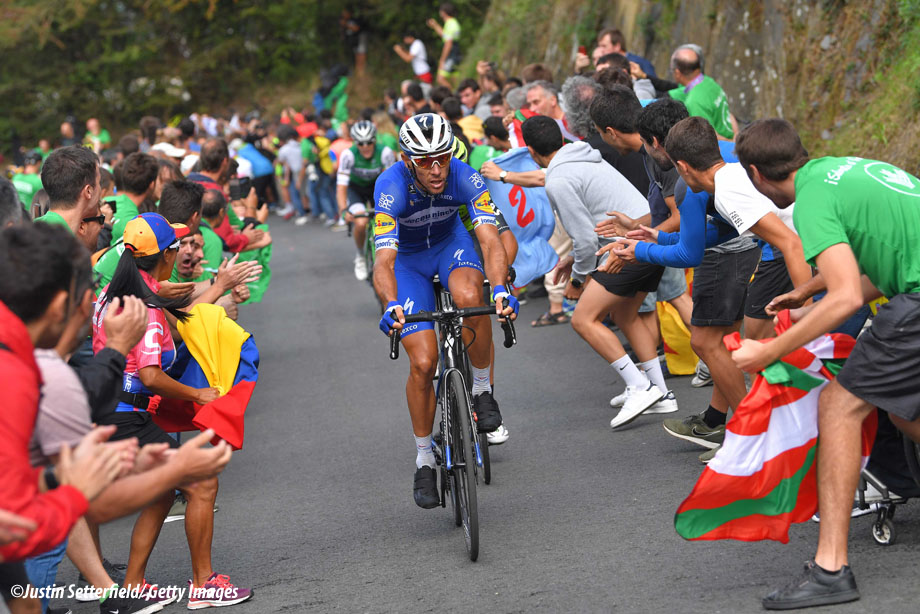 The big move from the Belgian 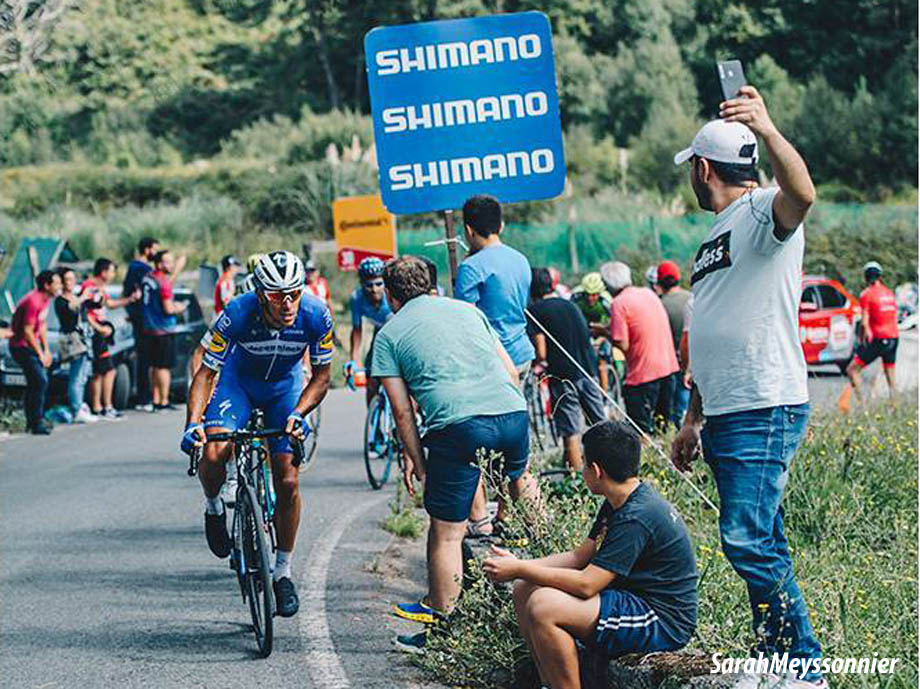 Gilbert wasn’t going to be caught

The Belgian looked behind him for a moment and saw the pained faces of Fernando Barceló and Alex Aranburu. Aranuru was immediately in trouble as Barceló briefly hoped to give his team Euskadi-Murias a second stage win in a row, but the promising climber proved unable to follow the experienced Gilbert. The former world champion continued solo, but still had 8 kilometres to go to the finish-line in Bilbao. 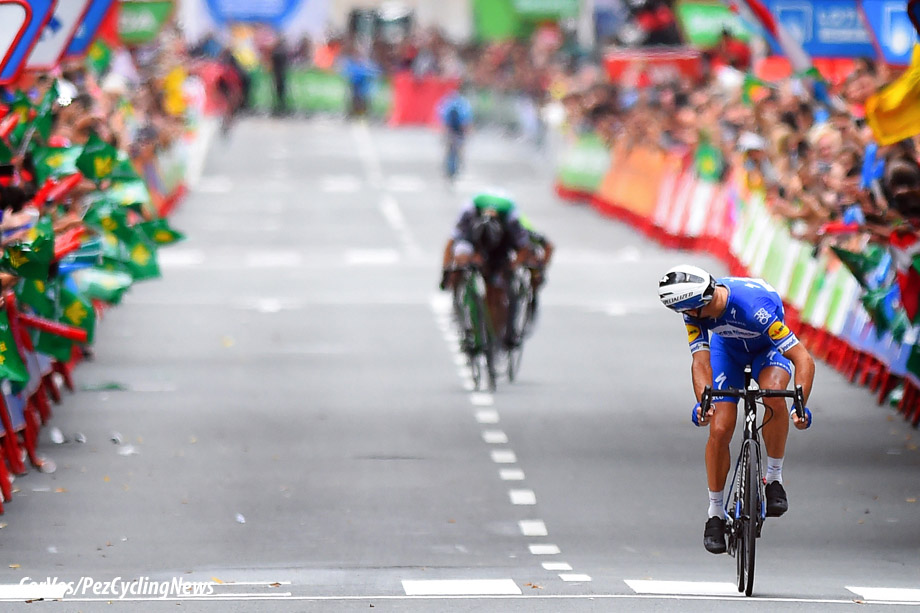 Gilbert held off the chasers

Strong Gilbert solos to victory
The 37-year-old continued to dance on the pedals to expand his lead and cross the Arraiz summit 20 seconds before Aranburu and Barceló. The win looked to be Gilberts, but the Spanish pursuers were working very well together on the final descent and the difference was getting smaller. 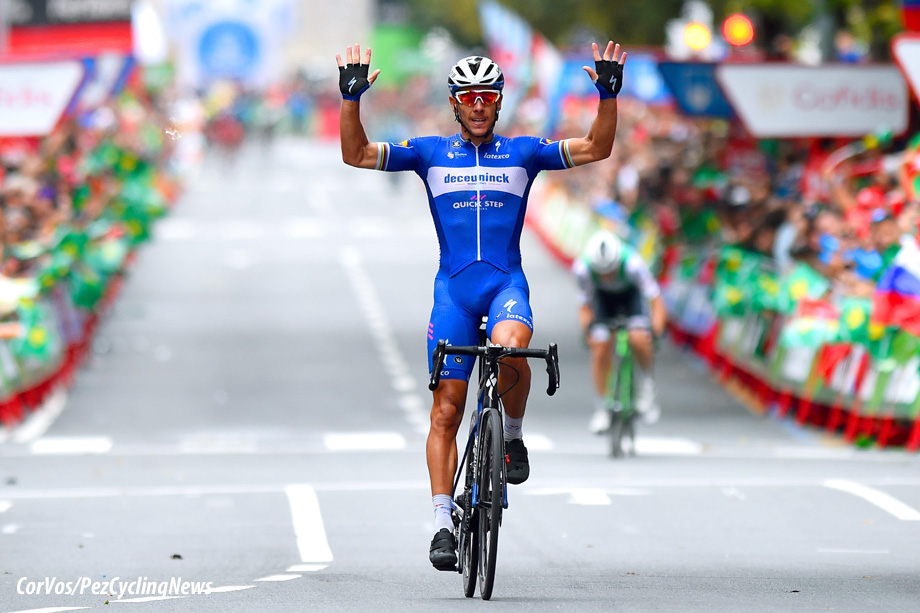 A hard fought, but well deserved win for Gilbert

With only 2 kilometres to go, the lead was only 5 seconds, but Aranburu and Barceló had used up all their energy. As a result, Gilbert’s lead increased a little and so the Belgian multi-champion had a few hundred meters to celebrate his victory. Aranburu had to settle for second again, while Barceló was third. 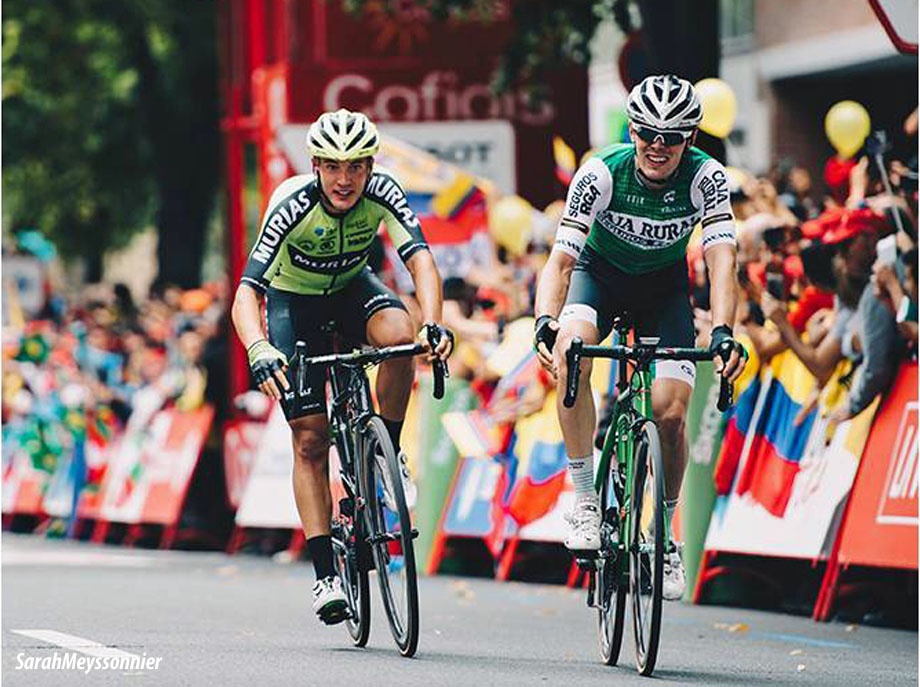 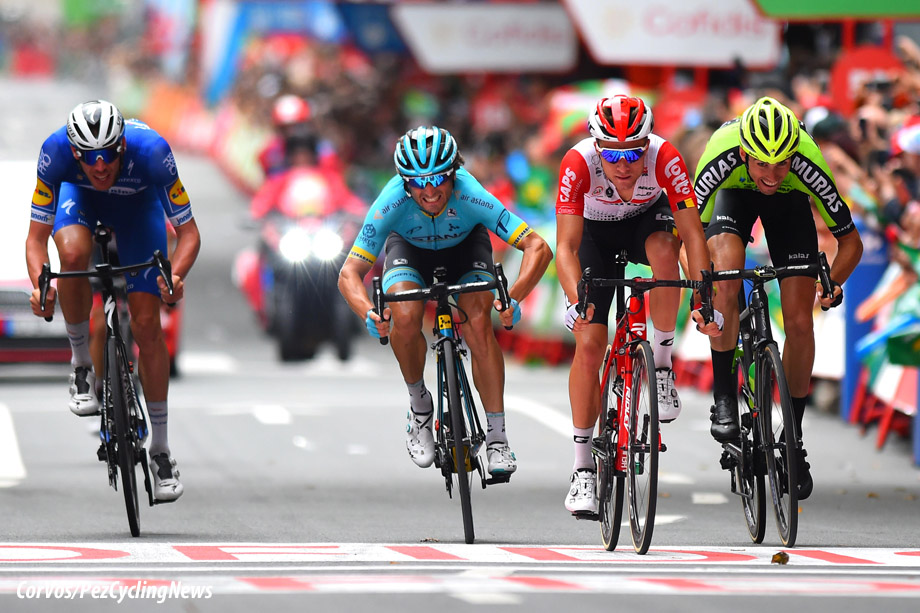 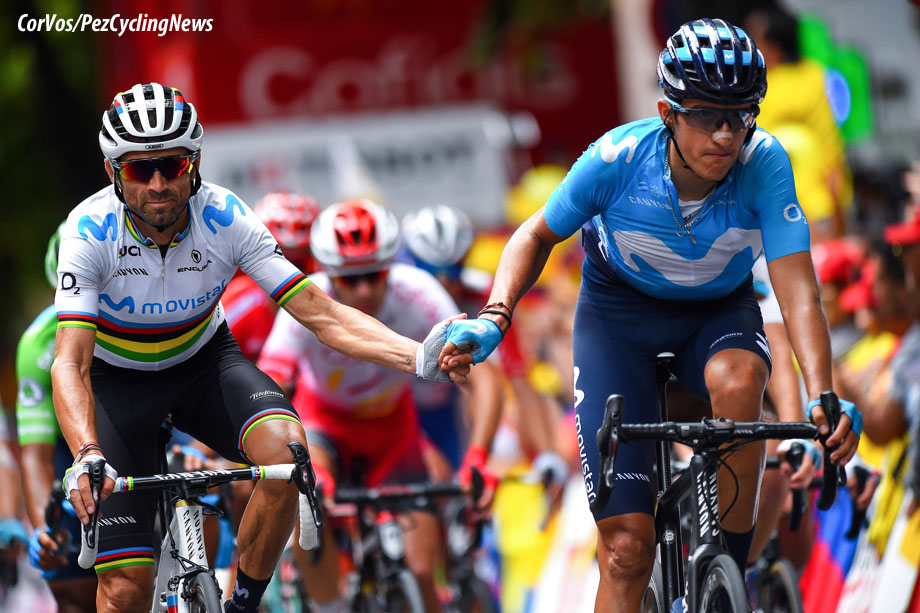 The top men finished in a depleted group

Stage winner, Philippe Gilbert (Deceuninck – Quick-Step): “It’s a nice one because it’s been a really hard La Vuelta until now. I didn’t have many chances to win. Today it was a long fight to get in the breakaway. There have been dozens and dozens of attacks. It was incredible. I must have attacked 20 times myself. It was really intense and painful. There were good climbers with me so I wasn’t really confident. I tried to race smart and I received some great help from my teammate Tim Declercq. He is a big part of this win and he deserves it as much as I do. The final climbs were a bit like the Ardennes. I like this kind of short effort, I’m able to be among the best when it’s under 10 minutes of climbing. It’s also special because it’s my 10th stage victory on a Grand Tour and that makes a nice number. The atmosphere in the last climb was crazy. It felt like a classic, with all the flags and the crowds. It gave me a lot of motivation. The Basque Country is a bit like Flanders, they love cycling and it’s nice.”