Vuelta Stage Report: Philippe Gilbert (Deceuninck – Quick-Step) took his second stage win in the 2019 Vuelta a España. The seventeenth stage was split into echelons by the crosswind causing problems for the GC teams. At the finish it looked like Sam Bennett (Bora-Hansgrohe) had the stage in the bag by starting the sprint early, but Gilbert swooped past for the win. Nairo Quintana (Movistar) took advantage of making it into the front group to move into second place overall. 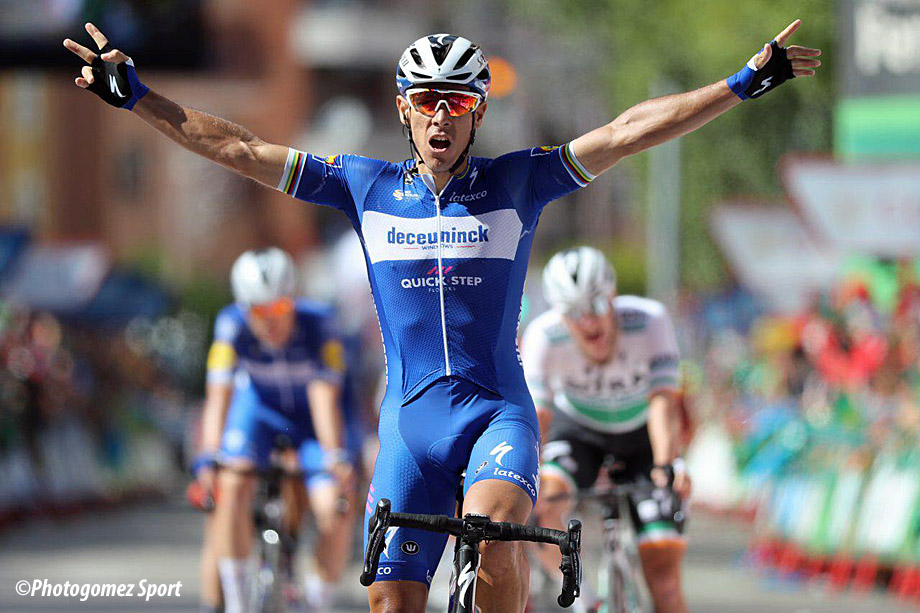 This is the longest stage in La Vuelta 19: 199km providing the perfect opportunity for a breakaway, unless an alliance of the sprinters’ teams agrees to arrange a sprint finish.

Today’s stage 17 was the longest of the 2019 Vuelta at just under 220 kilometres, it wasn’t a completely flat run to Guadalajara, 2,400 metres of climbing had to be taken into account. On the open high plains of Spain, the cross-winds were going to play an important and role. 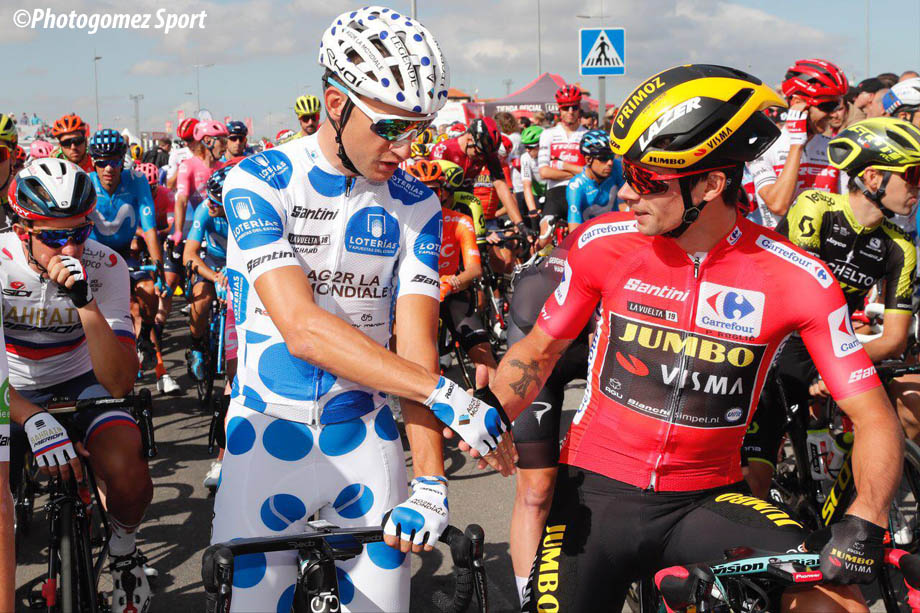 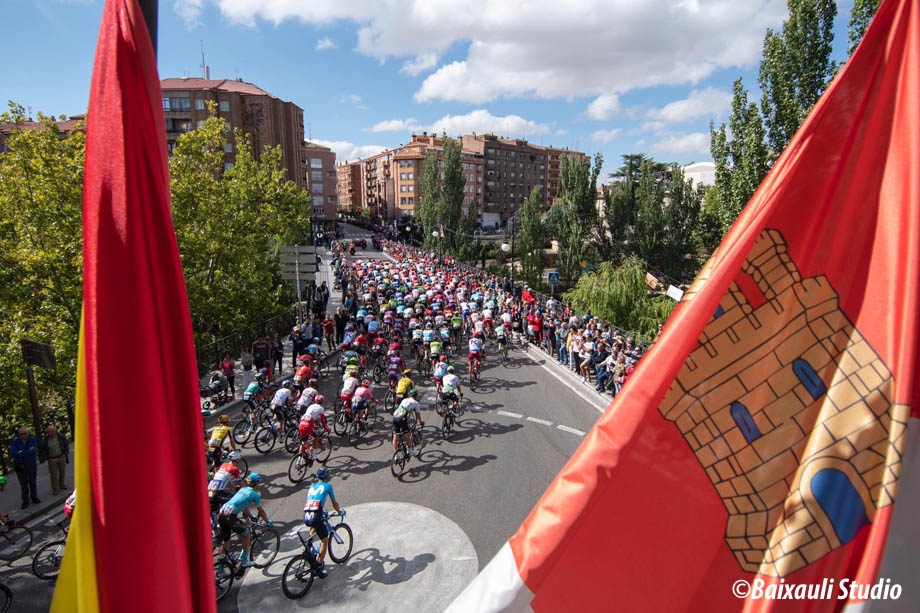 Rest day over and all roads lead to Madrid

Jésus Herrada (Cofidis) didn’t start due to sickness. The pace was high from the gun and that had immediate consequences, what many feared became reality. A large group of more than forty riders broke away. 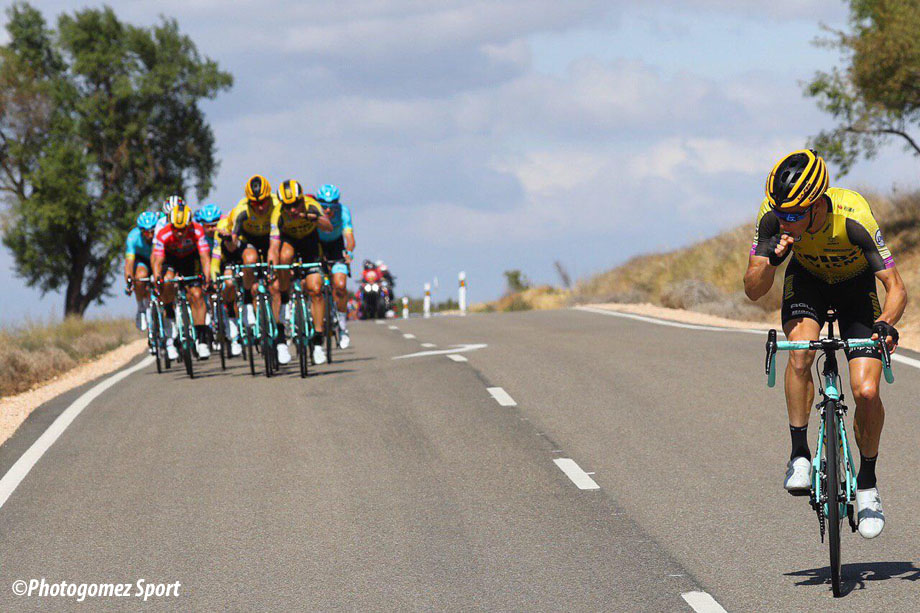 The Jumbo-Visma team were in control, at first 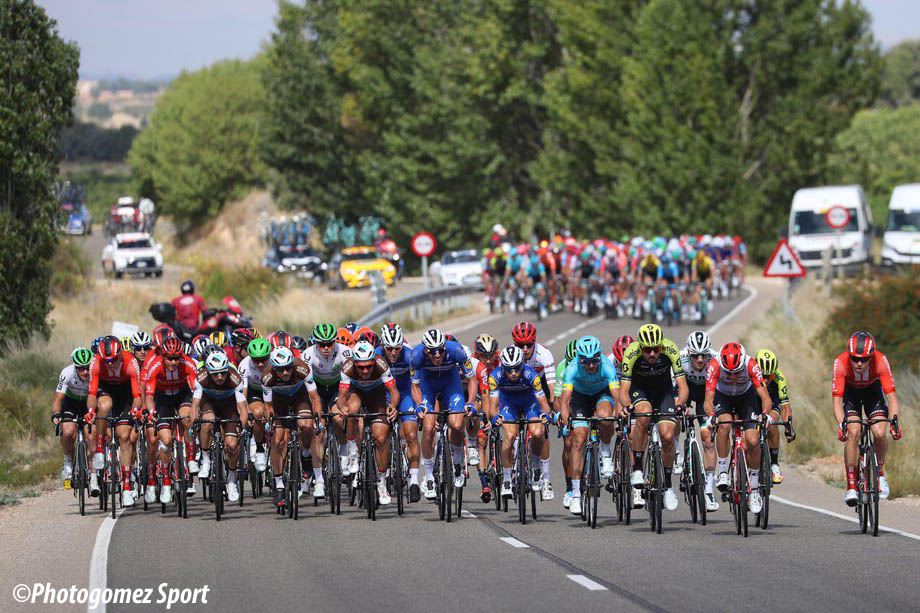 With the cross-winds there would be a surprise

In the front group, Nairo Quintana was the best GC rider in sixth place, more than 7 minutes down on the red jersey, Primož Roglič. Wilco Kelderman (8th) and James Knox (11th) were also up front and had teammates to help. Roglič was not there, so Neilson Powless sat up to wait for the peloton. After 50 kilometres the difference between the first and second group was more than two and a half minutes. 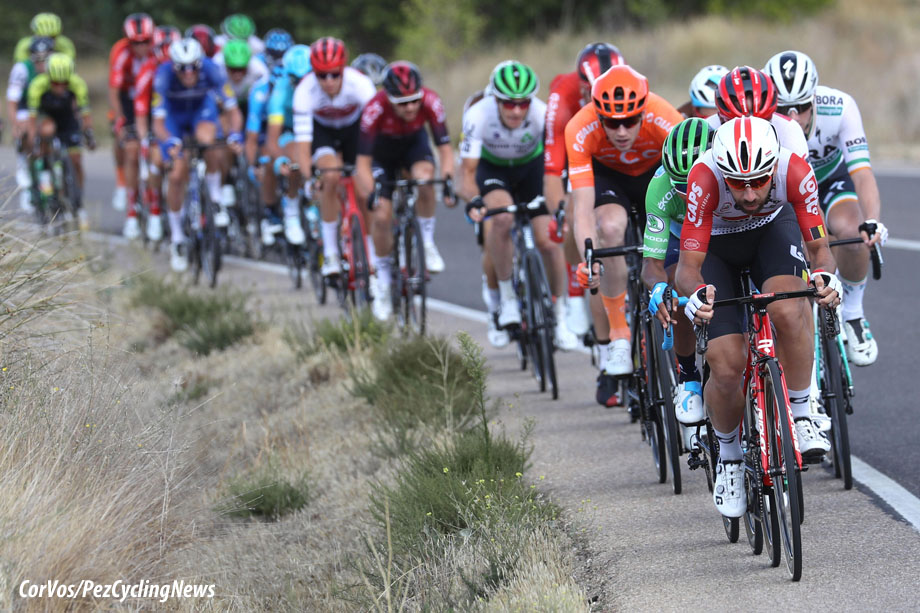 Due to the high pace, more and more riders were dropped from the front group, while the lead increased. After 2 hours the race had an average speed of 47.6 kilometres per hour, and the front group had thinned to about 30 riders, while the Roglič group was at more than 4:30. With Quintana as the most dangerous rider at the front; Roglic, Tadej Pogačar and Miguel Ángel López could not relax. 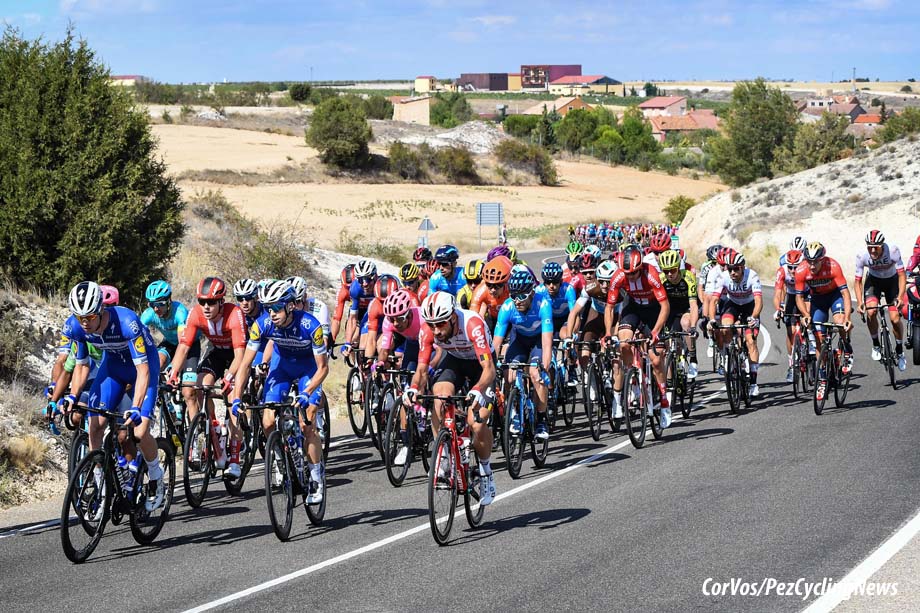 Quintana looking at a podium place?
UAE Team Emirates’ Marcato and Troia also say up, as Powless did before, to assist their leader. López also had his Astana teammates working hard. As the difference got to almost 6 minutes after 120 kilometres, Quintana was in virtual second place overall. Fabio Jakobsen lost his place at the front on a slight climb, just when it looked like the Dutchman would be going for the stage victory. 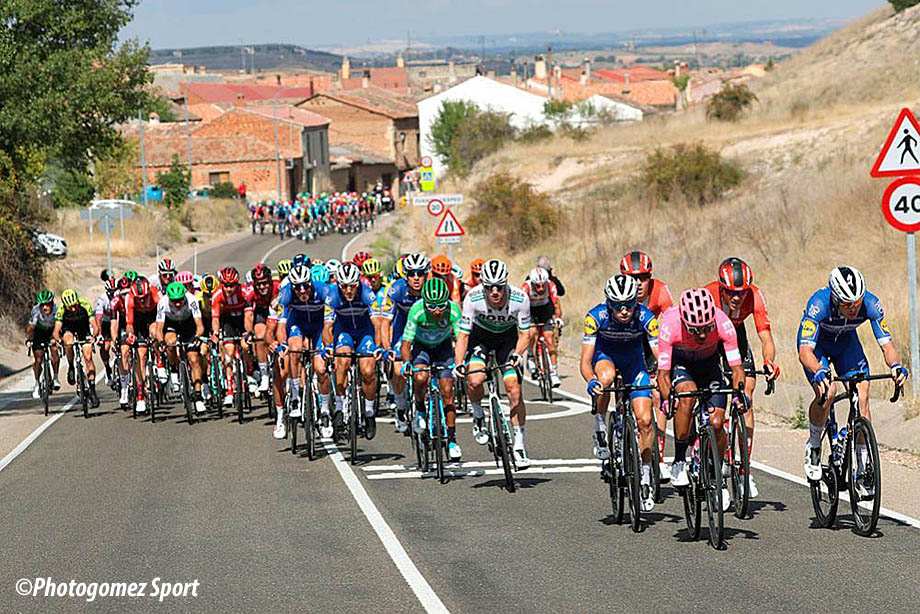 Surprisingly, in the last 50 kilometres, Movistar suddenly lifted the pace in the favourites group. The teammates of Quintana and Alejandro Valverde started to lead the chase. As a result, the advantage was reduced to under 5 minutes. As quickly as the lead of the escape group had risen, it was difficult to bring it back. 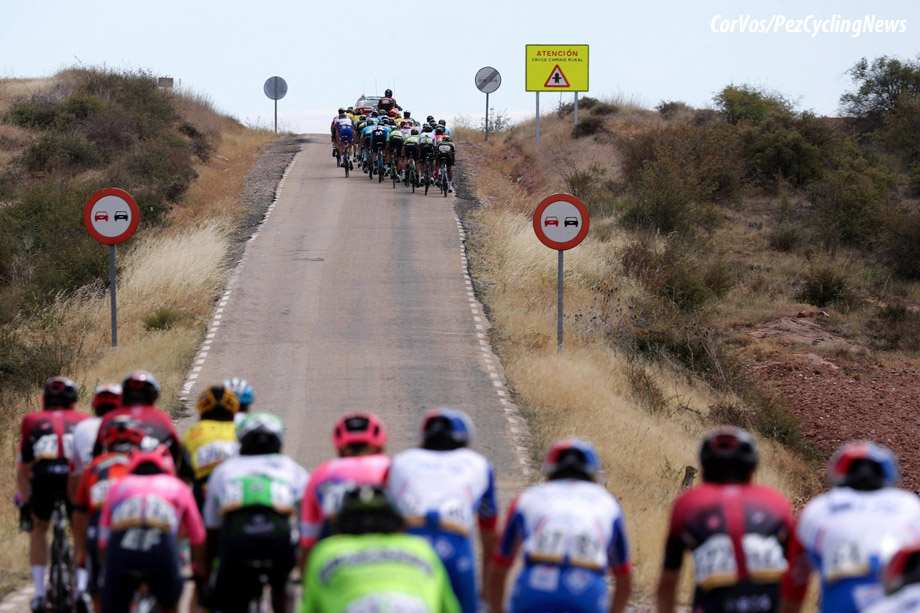 At the start of the last 20 kilometres, the difference remained around 4:45, while Movistar, who led the chase and also the first group, Sunweb and Deceuninck – Quick-Step set the pace at the front. Movistar rode in the interest of Quintana, while Sunweb and Deceuninck – Quick-Step did the work for their GC riders Kelderman and Knox. As a result, the lead increased a little to 5 minutes. 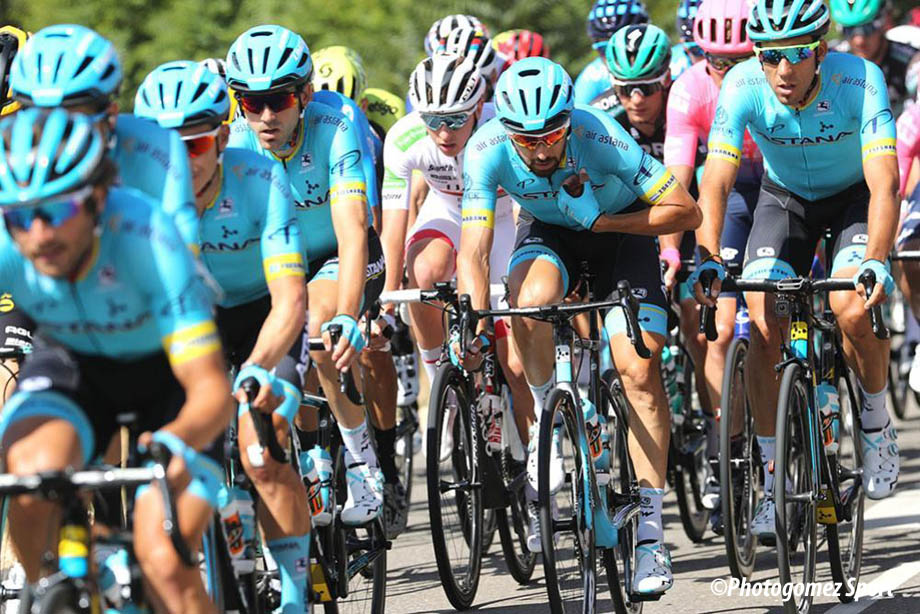 Astana had to chase for Lopez and his podium spot 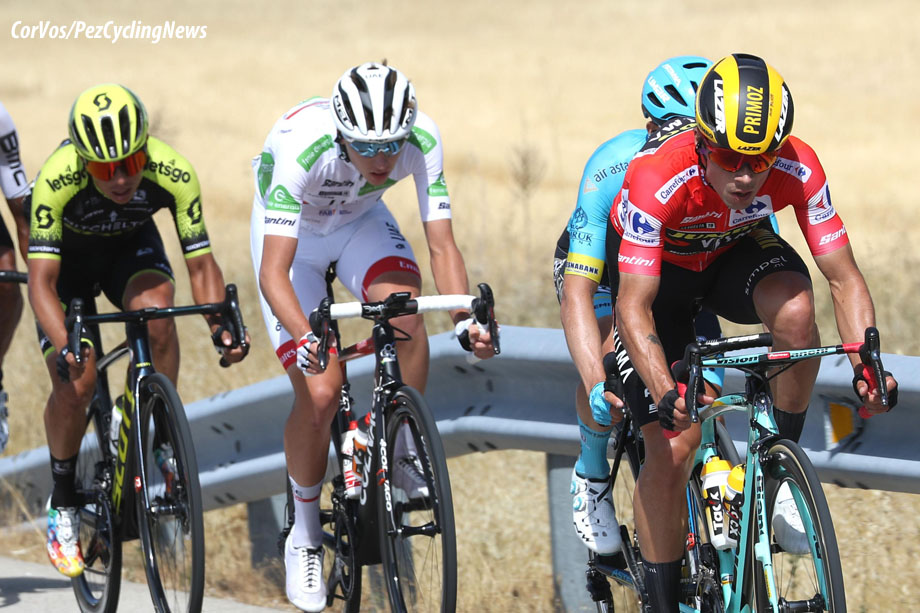 Sam Bennett jumps early…
The stage winner had to come from the leading group. Deceuninck – Quick-Step had Ždenek Štybar attack 2 kilometres from the line, with Sam Bennett in the group, the race had to be made as hard as possible. Wout Poels countered with Philippe Gilbert and Sam Bennett. The final kilometre had a rise to the line and Bennett started his sprint with 550 metres to go. 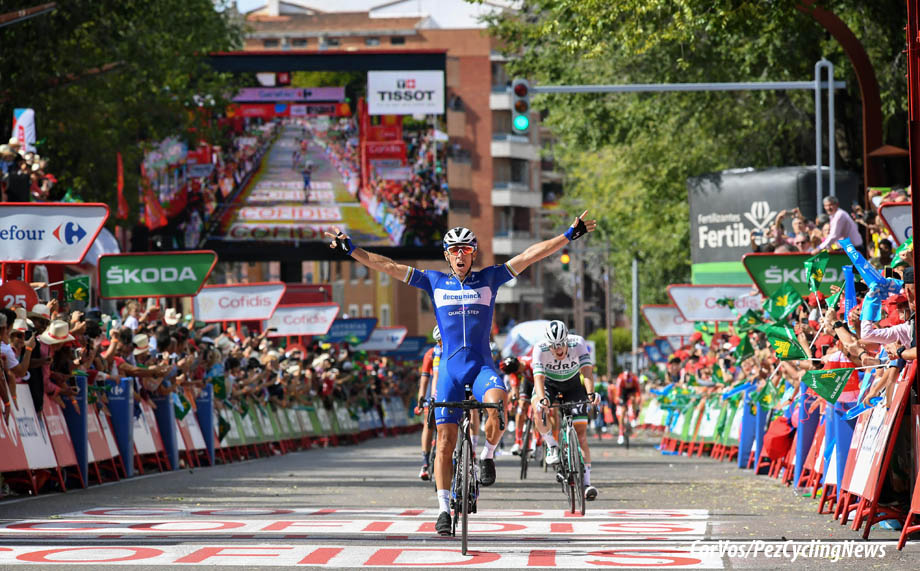 Gilbert went after the Irish champion, who sat in his saddle 300 meters from the line. The Belgian could smell blood and shot past the empty sprinter on his way to his second stage success of this Vuelta as he had already won in Bilbao. Bennett managed to hang on for second place. Rémi Cavagna, Dylan Teuns and Wilco Kelderman completed the top five of the day. 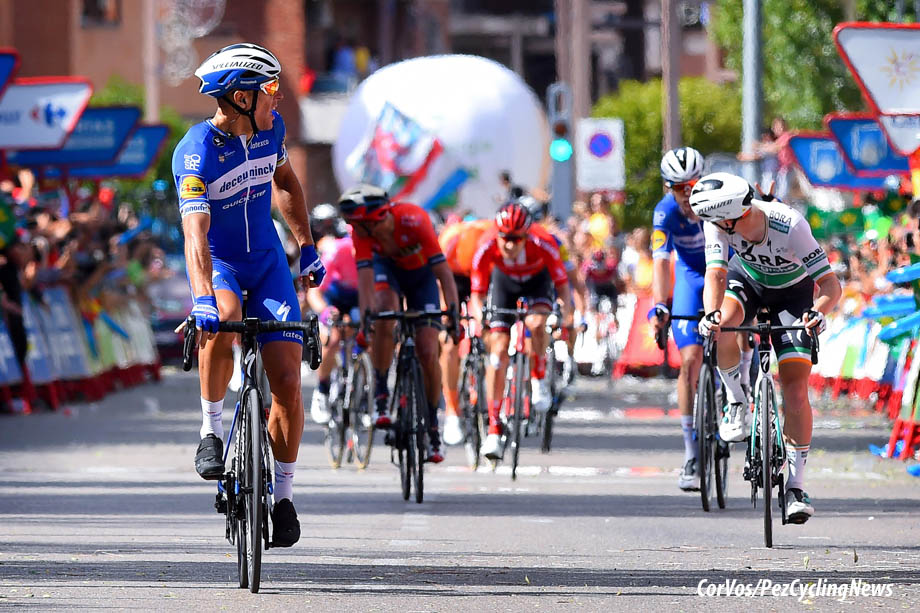 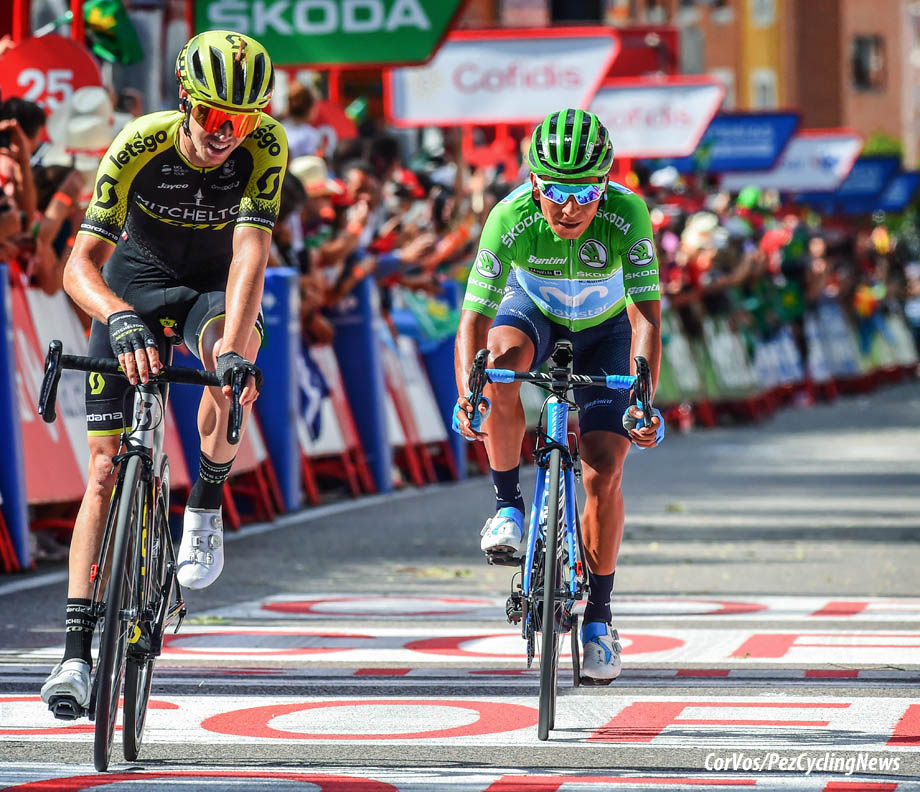 Quintana crossed the finish line in 14th place, which moved him up to second on the general classification. The peloton; including Miguel Ángel López, Alejandro Valverde, Primož Roglič and Tadej Pogačar crossed the finish line almost five and a half minutes later, moving Quintana to 2nd place, Wilco Kelderman to 6th and James Knox to 8th. He still has to admit 2:24 to Roglič now has 2:24 on Quintana, 2:48 on Valverde, Pogačar at 3:42 and López at 3:59. 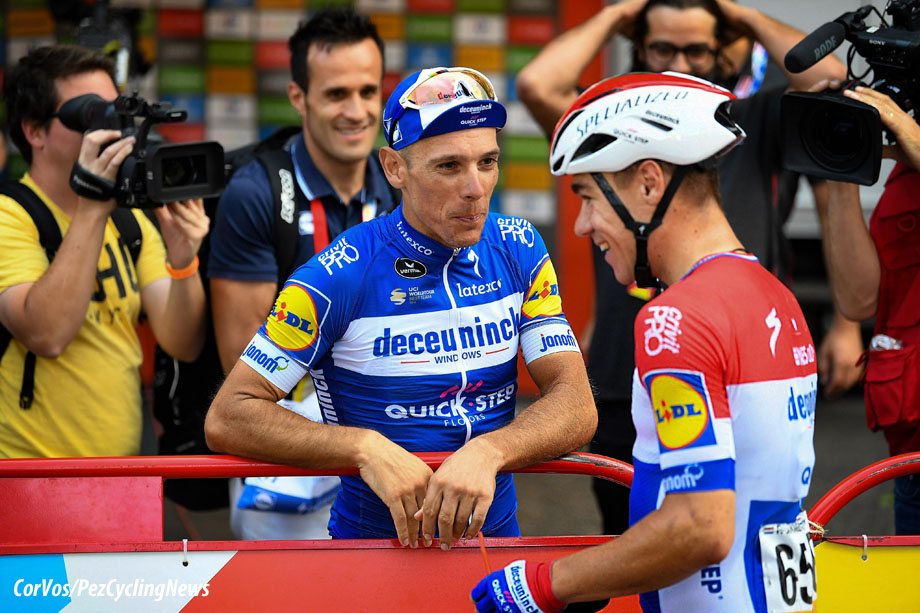 A stunning day for the Deceuninck – Quick-Step team

Stage winner, Philippe Gilbert (Deceuninck – Quick-Step): “It’s a very special one. I think it’s a stage that will stay in the history books because of the way we rode. It was crazy from the gun. We went with a big group of 40 guys. There were some guys for GC like Quintana and James Knox for ourselves. We were 7 of the 8 Deceuninck guys and we rode crazy as a team, we gave morale to each other and it was incredible to see. As the kilometres passed, we lost some guys with the crosswinds, the climbs… It was really fast. At some point we were doing 75km/h on the flat. I had a 54×11 and I was spinning all the time. In 17 years as a pro, I don’t think I’ve ever done that. It was really really crazy. The crosswinds and echelons are part of the team’s DNA and I also love it. It’s not the first time I win two stages in a Grand Tour but I’ve never done it three times. Friday’s stage suits me and I’ll try to fight for victory in Toledo.” 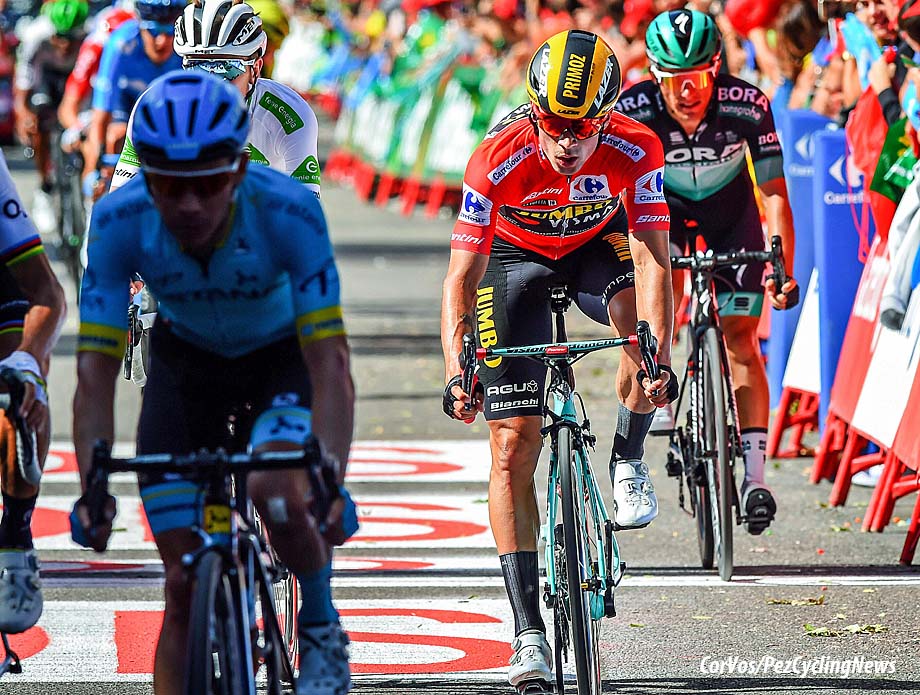 Roglic and Co. came in over 5 minutes later

Catching Up With BEAT’s Adam Lewis