Vuelta Stage Report: The penultimate mountain stage of la Vuelta a España was won by EF Education First’s Sergio Higuita. The promising Colombian had lost twenty minutes on the road to Guadalajara yesterday, but today he soloed to his first professional victory. Miguel Ángel López (Astana) provided the fireworks among the favourites, causing Nairo Quintana (Movistar) and Tadej Pogačar (UAE Team Emirates) to lose time. Alejandro Valverde (Movistar) and Lopez moved back up the GC. 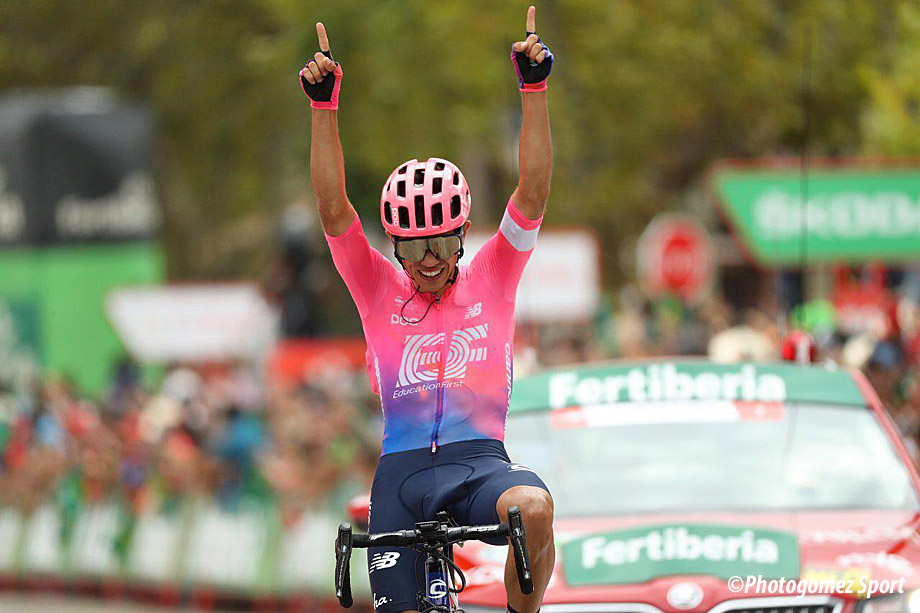 Big win for the little Colombian

A very hard stage, similar to the one in which Fabio Aru managed to overtake Dumoulin as race leader in La Vuelta’15 with only one stage remaining. The climbs involve the mountain passes of Navacerrada, La Morcuera on both sides, and Cotos, from where the race will continue downhill to the finish in Becerril de la Sierra.

A day after the battle of Guadalajara, it was all hands on deck again for the classification riders. As the Vuelta today entered the Sierra de Guadarrama, a mountain range not far from Madrid. The Puerto de Navacerrada (twice), the Puerto de la Morcuera and the Puerto de Cotos were on the menu before the finish in Becerril de la Sierra. Tireless Cavagna opens the course
Admittedly, these are not the toughest climbs of this year’s Vuelta, but the riders had 3,697 metres of climbing today. 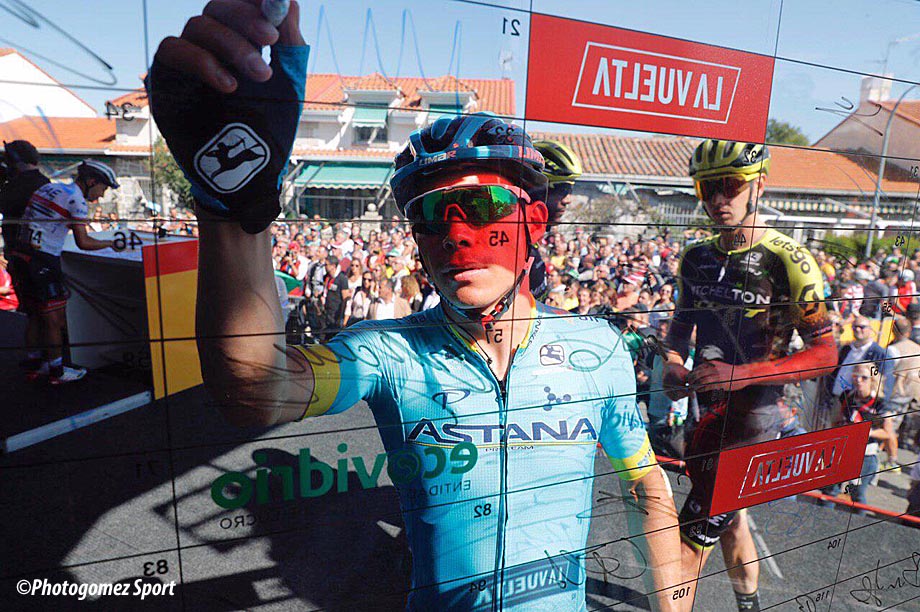 Miguel Ángel López 5th overall at the start of the day 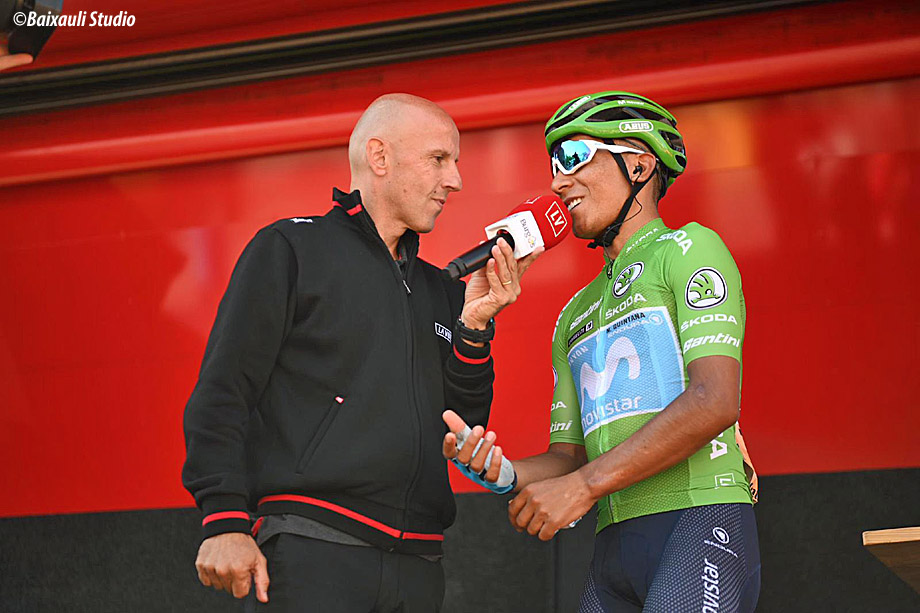 Cavagna starts the action
The first real attack came from Rémi Cavagna, again. The Deceuninck – Quick-Step rider finished third in Guadalajara yesterday, but also had good legs today. Cavagna rode alone for a while, but after 15 kilometres he was joined by Will Barta and Steve Morabito. The peloton was not far behind and they were caught before the Puerto de Navacerrada. Nobody managed to escape on the flat, but after a few hundred metres of the climb there was an attack from Wout Poels. The Ineos rider tried hard to make a gap, but could only take 20 seconds. 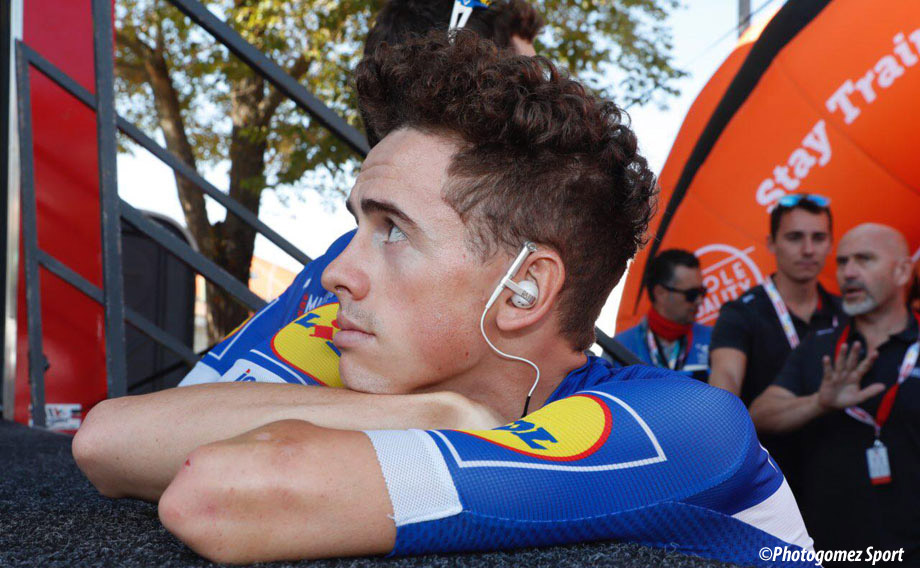 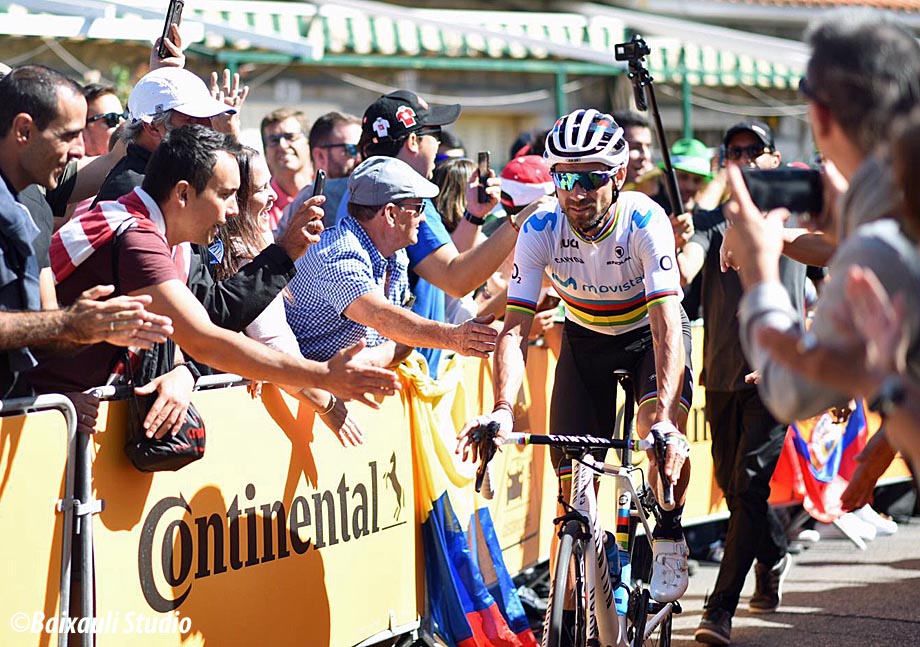 World champion, Alejandro Valverde, lost 2nd place to his teammate Quintana on Wednesday, but took it back on Thursday

The peloton was already thinned out by the fast pace. After working from the start, Tony Martin and Lennard Hofstede had to drop off the back, so they could no longer help leader Primož Roglič. Poels was being chased by Thomas De Gendt, KOM Geoffrey Bouchard and Hermann Pernsteiner. 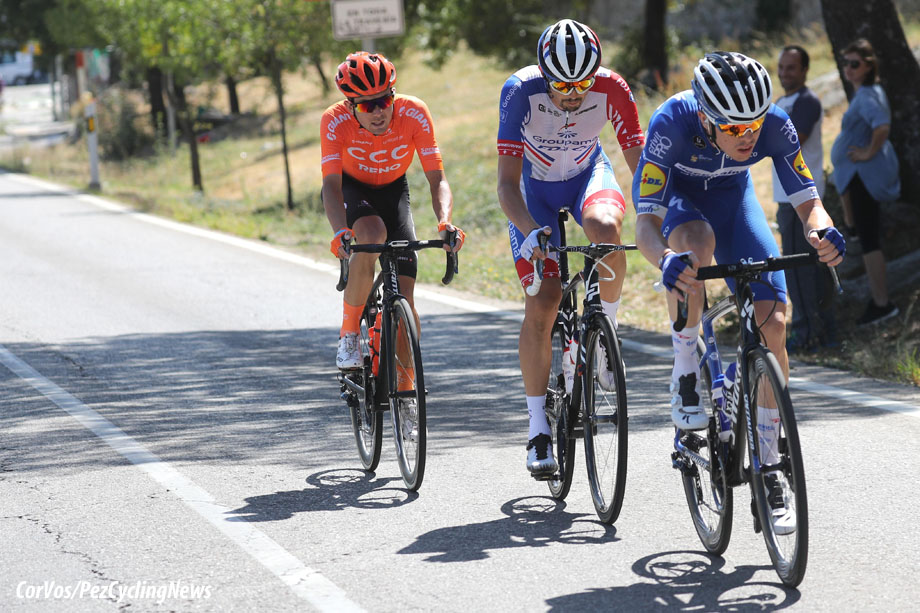 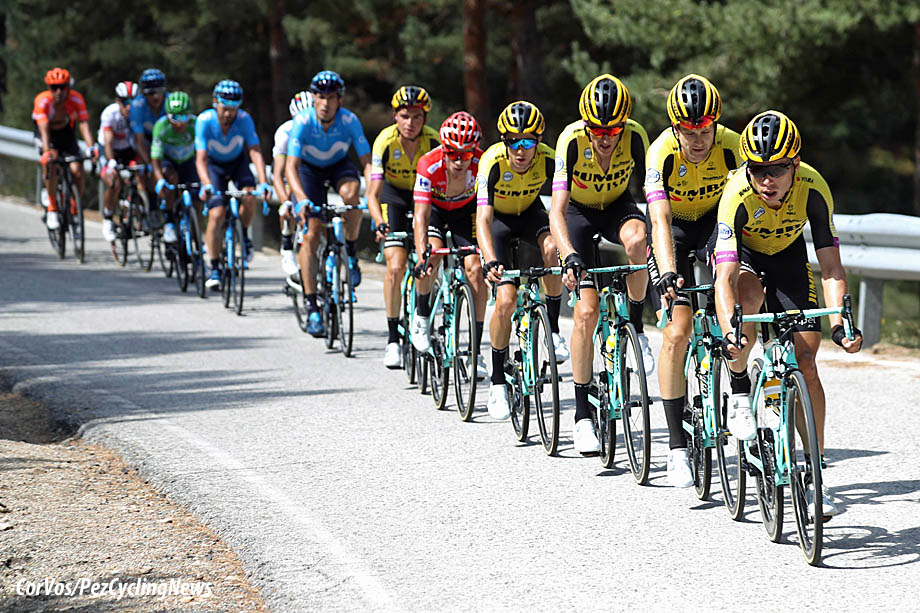 De Gendt was soon back to the group of favourites, while Pernsteiner and Bouchard carried on their pursuit of Poels, who took 10 KOM points on the Navacerrada (Cat.1). Forty seconds after Poels, Bouchard took 6 points for second over the climb. On the descent of the Navacerrada, Poels was still ahead, but his lead had dropped to 15 seconds on a few pursuers, who took slightly more risks than the overall riders. Poels was eventually joined by Bouchard, Sergio Higuita, Tobias Ludvigsson, Louis Meintjes, Tao Geoghegan Hart and Nick Schultz. 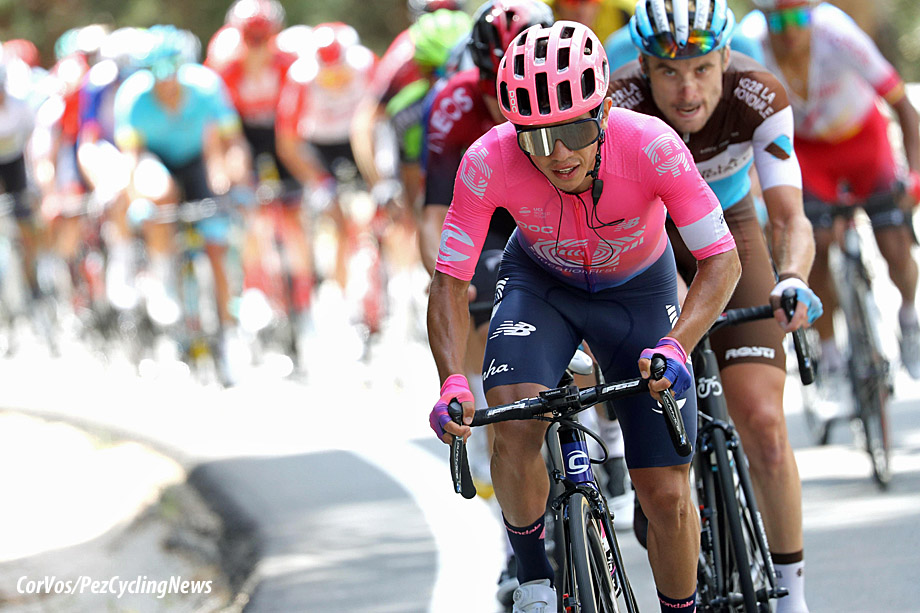 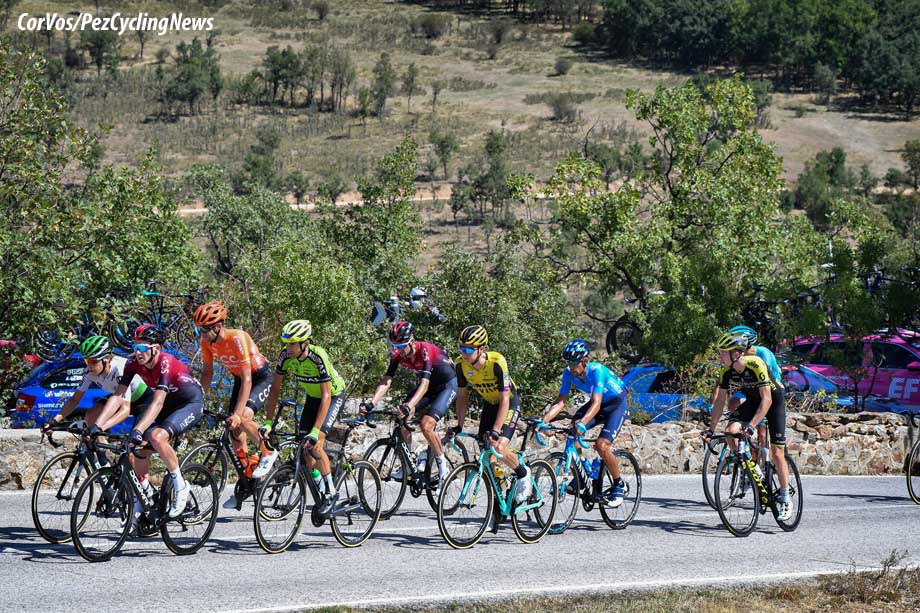 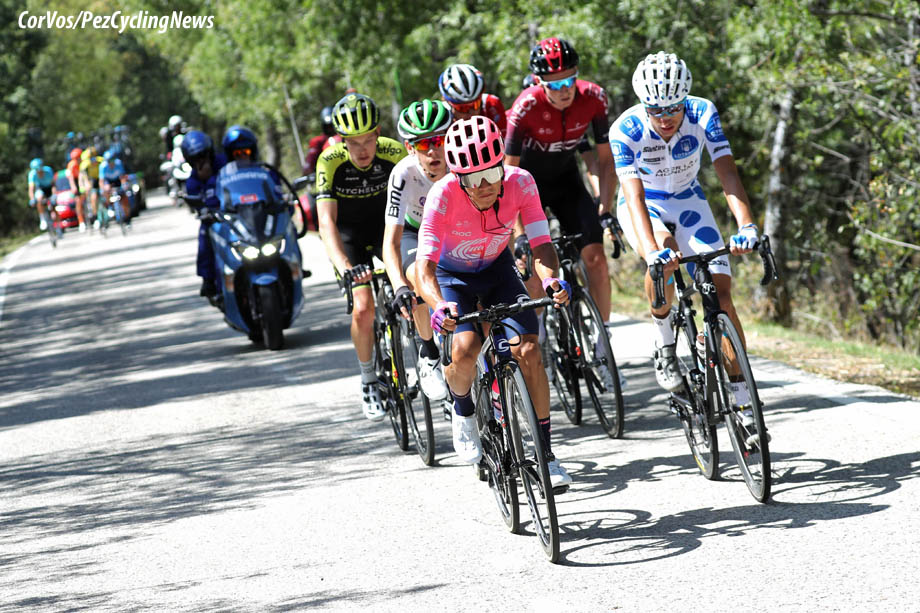 Red jersey wearer, Roglič, had Powless up front, but the Movistar duo of Alejandro Valverde and Nairo Quintana had Oliveira and Miguel Ángel López had Fraile. At the top of the Puerto de la Morcuera, where Bouchard was first, the difference had increased to more than 5 minutes. Roglič was not worried. 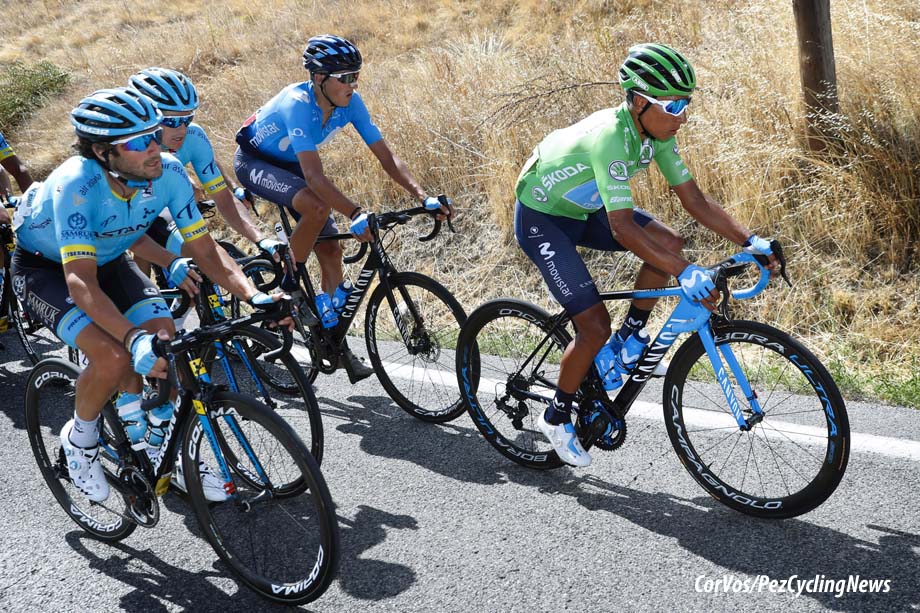 Quintana had to be careful on all sides

Astana lifted the pace on the Morcuera
Just before the foot of the second climb of the Morcuera (this time from the other side) there were more attacks. Meintjes (yes, he is in the Vuelta) and Koch escaped, but were soon pulled back by the others in the break, including Rodríguez, Higuita and Poels. From the slow pace of Jumbo-Visma, the speed shot up under the impetus of Astana, setting the pace for López. Luis León Sanchez and Ion Izagirre put the hammer down and the favourite group was thinned out yet again and waiting for the Colombian, Lopez, to make a move. 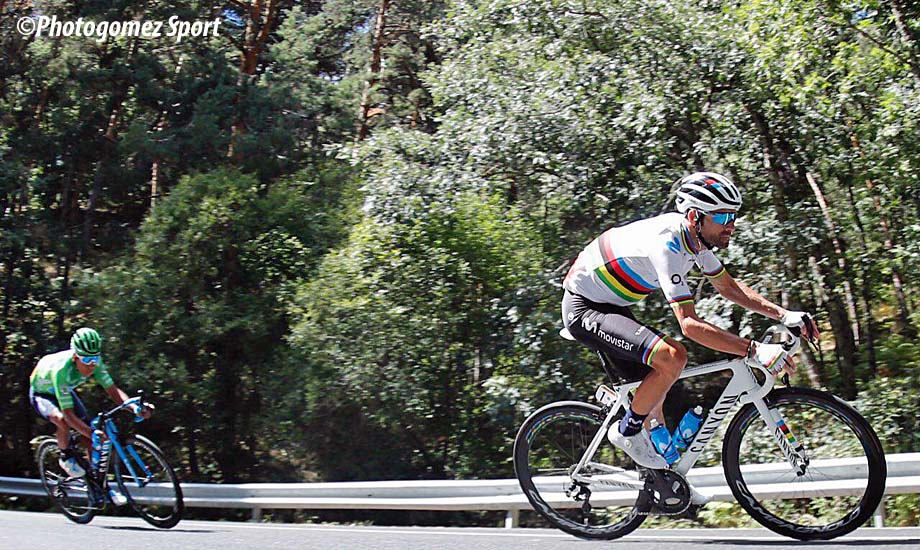 Valverde wanted that second place back, but had to be clever

The Astana leader put in an attack and soon had 20 seconds on his competitors, due to Valverde, Roglič, Quintana, Tadej Pogačar and Rafał Majka looking at each other, no one wanted to make the effort to chase. López took full advantage, although the difference at the top of the Morcuera was not too great. On the descent, Valverde and Quintana had Soler and Oliveira to ride tempo. This limited López’s lead to 15 seconds. At the front, there was a fight between Higuita, who had gone solo, and chasers from the escape. 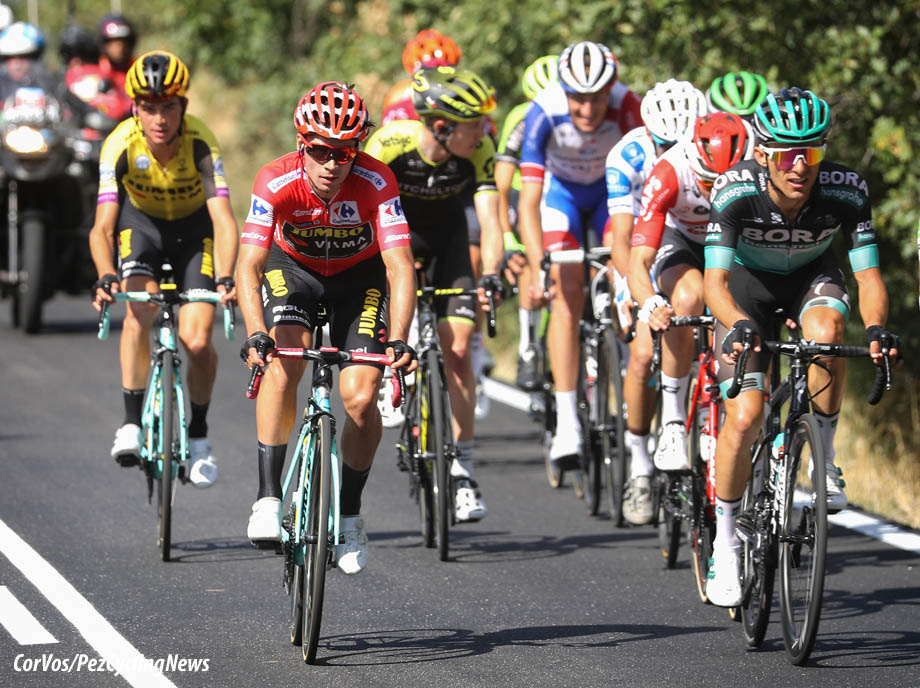 Roglic and Majka made the chase group

The young Colombian from EF Education First had managed to drop his fellow escapees, but the action was behind the brave Higuita, since López was caught by the Roglič group in the valley between the Morcuera and the Puerto de Cotos. The danger from López had been snuffed out, so the pace dropped again and Higuita was able to take more time. The Colombian started with a lead of 1:30 on the Puerto de Cotos, a fairly long but not too steep climb. The climb was tough enough for López to thin out the favourite’s group. The Astana leader of Astana made several accelerations, but he could not rid himself of a strong Valverde and a sticky Roglič. Pogačar and Quintana were in trouble. 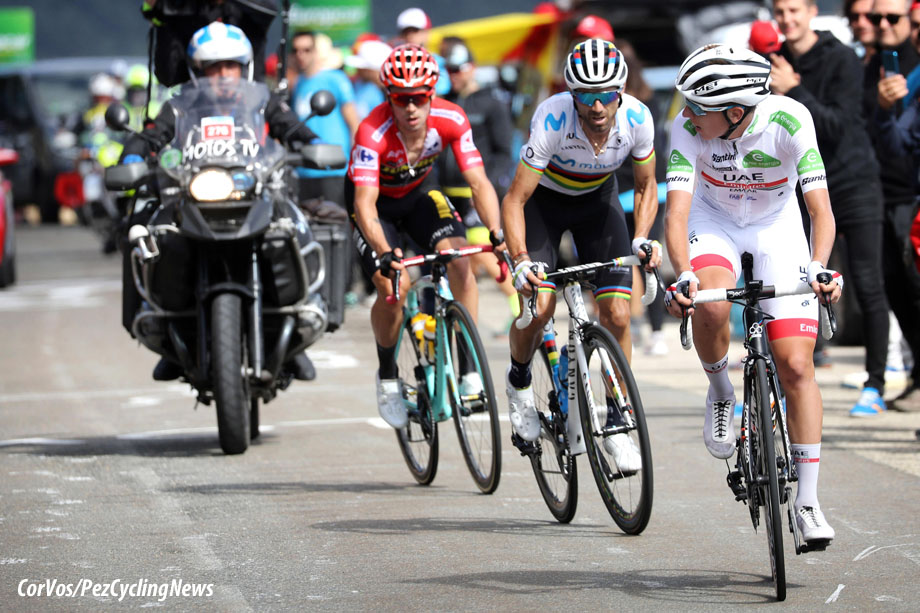 Quintana and Pogačar lose time
Nairo Quintana and Tadej Pogacar could not follow the pace of López, and hoped to limit the damage by riding at their own pace. With 25 kilometres to go; Higuita had 40 seconds on López, Valverde, Roglič and the returned Majka. Half a minute later; Pogačar was 15 seconds ahead of Quintana. 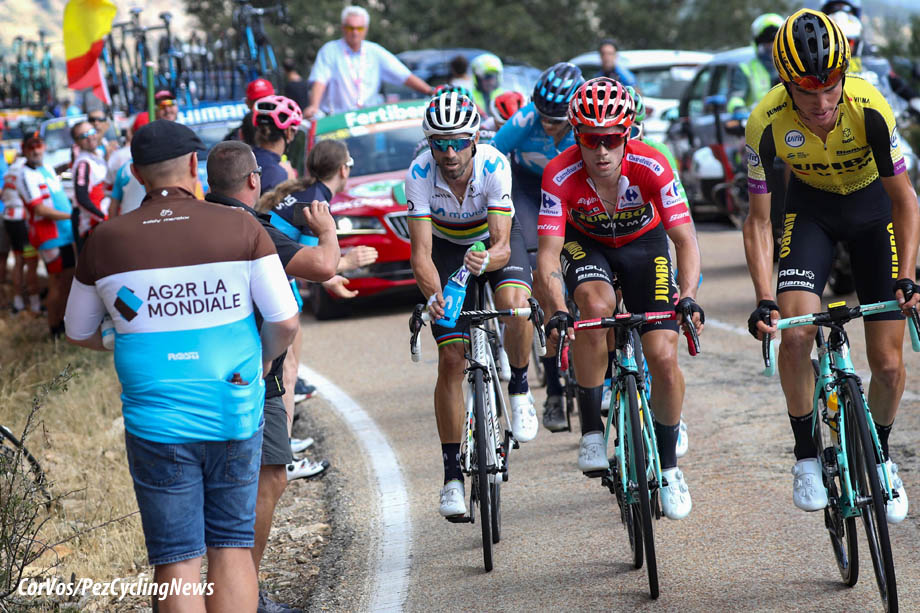 Roglic and Valverde had to watch each other

López received some help from Roglič on the descent, but Valverde had to hold back for tactical reasons, as Quintana was in the group behind. Was the World champion only interested in the stage victory, or did he want to move back up the GC. Valverde’s plan for a stage win didn’t work, as the young Colombian climber was able to solo to the stage victory. 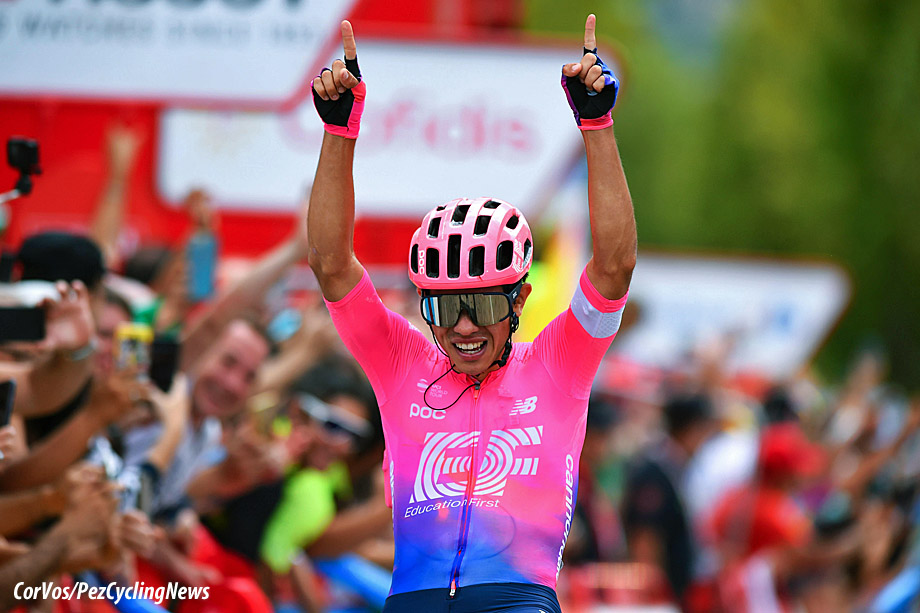 Higuita managed to hold off the chasers to take the win for the troubled EF Education First, and his first pro victory. 15 seconds after the stage winner, we saw Roglič sprint to second place, ahead of Valverde, Majka and López. Pogačar and Quintana managed to limit the damage to one minute, but this means that Valverde took his 2nd place back from Quintana and López jumped over Pogačar. 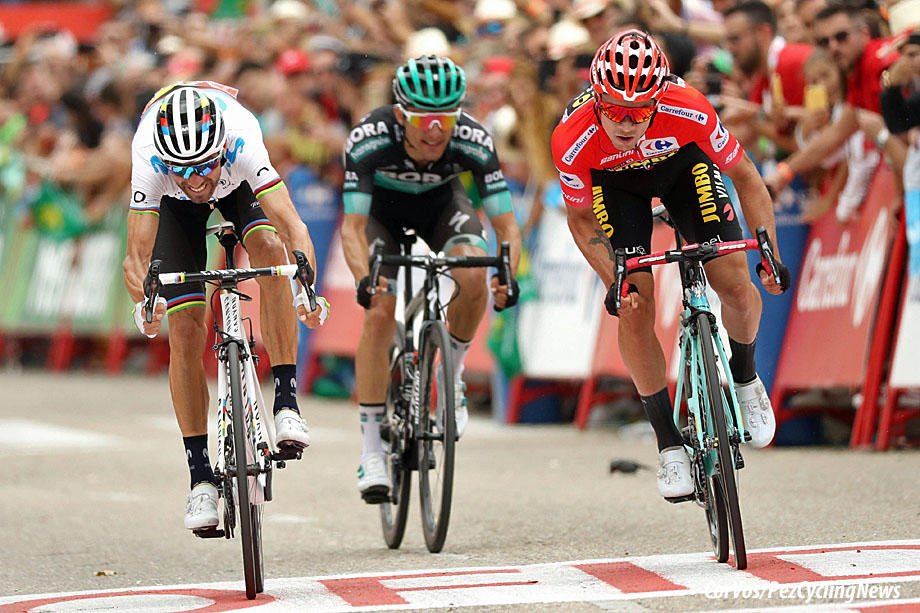 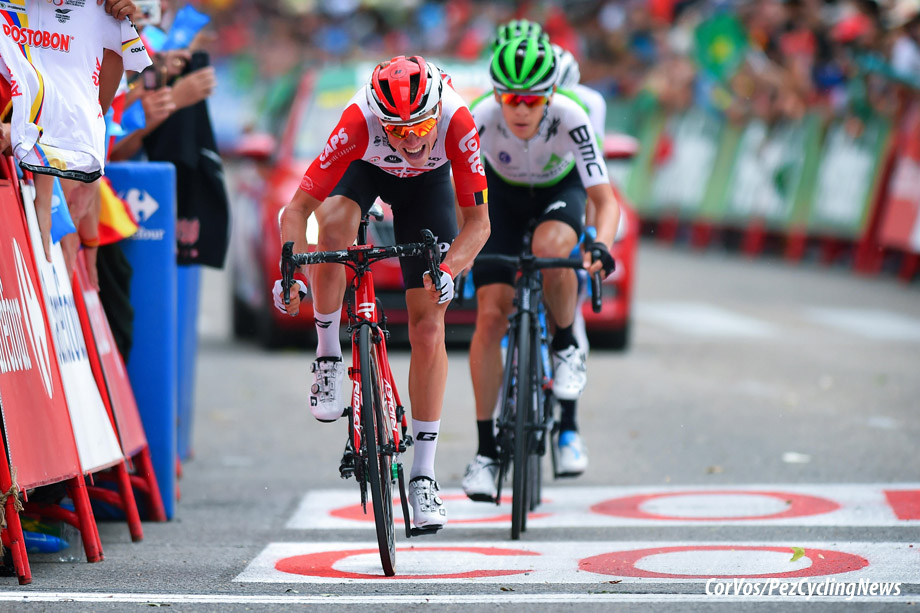 Stage winner, Sergio Higuita (EF Education First): “Yesterday, when I didn’t have the legs to be in the echelons and fight for the top10 of the GC, we decided to save energy for today and to relax as much as possible, as if it were a recovery ride. It was great for me, as I was feeling really tired before the stage – I even fell asleep on the bus! This helped me relieve some pressure off me and take the start today with renewed energies. Today’s stage was perfect for me: I could either win from a breakaway or from a sprint. Climbing Cotos I felt extraordinary good legs, and I was able to keep my chasers at bay. I went full gas to the finish line, as I was pretty motivated to give my team a stage win after such a difficult La Vuelta. I didn’t have any energy left, but I had my heart set on those dreams I’ve chased for so long. I didn’t assume victory was mine until 5 kilometres to go, as my chasers were quite strong and I was afraid they would catch me. My DS kept spurring me, and insisted I could make it to the finish line. I was very emotional at the finish line because there were so many Colombian fans there. At La Vuelta 19, I’ve learnt not to give up, not even in the worse moments, and to be resilient. Every day is whole different story on which one can triumph.”