Vuelta Stage Report: Tadej Pogačar (UAE Team Emirates) took his third stage victory after a long solo ride in the finalé of stage 20, this put the Slovenian on the third step of the overall podium. Primoz Roglič guaranteed his win in the 2019 Vuelta a España. The Jumbo-Visma had no problems on the last mountain stage to the Plataforma de Gredos, despite some attacks from Miguel Ángel López (Astana) and Alejandro Valverde (Movistar). 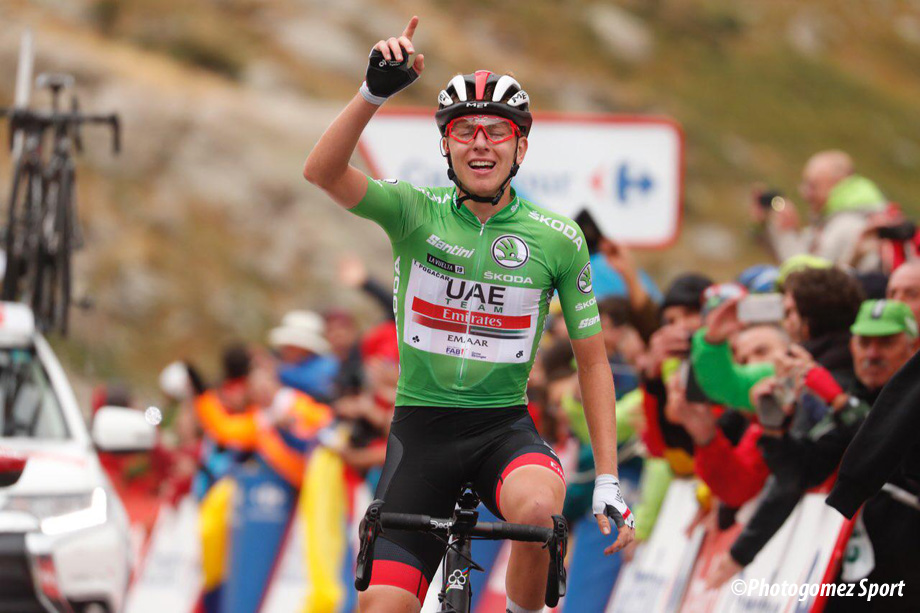 A perfect plan – Stage win and 3rd overall for Pogačar

A difficult stage serving up five mountain passes. If any of the teams have any gunpowder left, this is the perfect terrain for an ambush. A very winding route up to the climb of Puerto de Peña Negra (1st category), where the race leader will have to fend off his rivals’ right down to the wire if he wants to win La Vuelta.

On the way to the Plataforma de Gredos, Miguel Ángel López, Alejandro Valverde, Nairo Quintana and Tadej Pogacar were once again given the opportunity to really blast overall leader Primoz Roglic. With two first category climbs, two second category and two third category climbs, the stage was set with sufficient opportunities to turn the Vuelta table upside down. 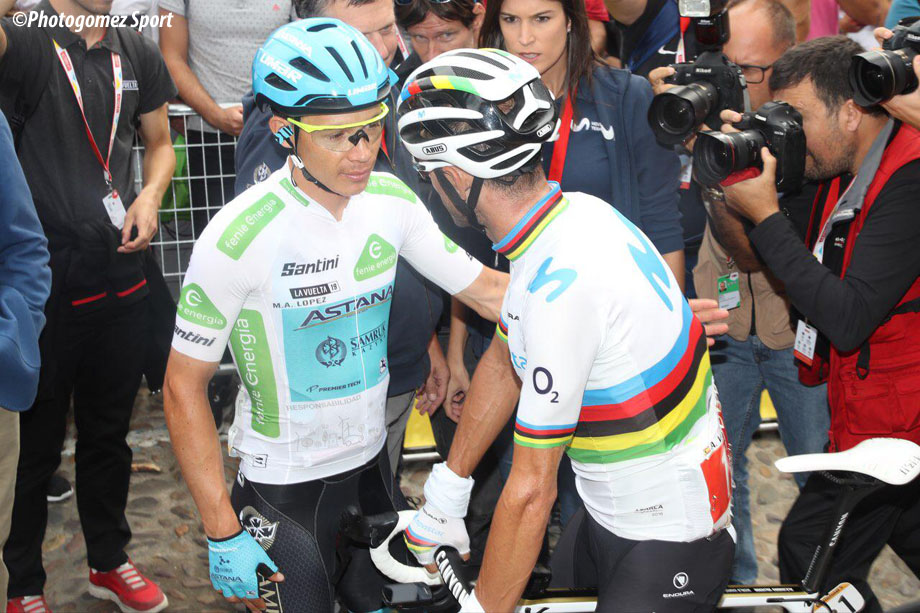 Are yesterday’s words all forgiven and maybe forgotten? 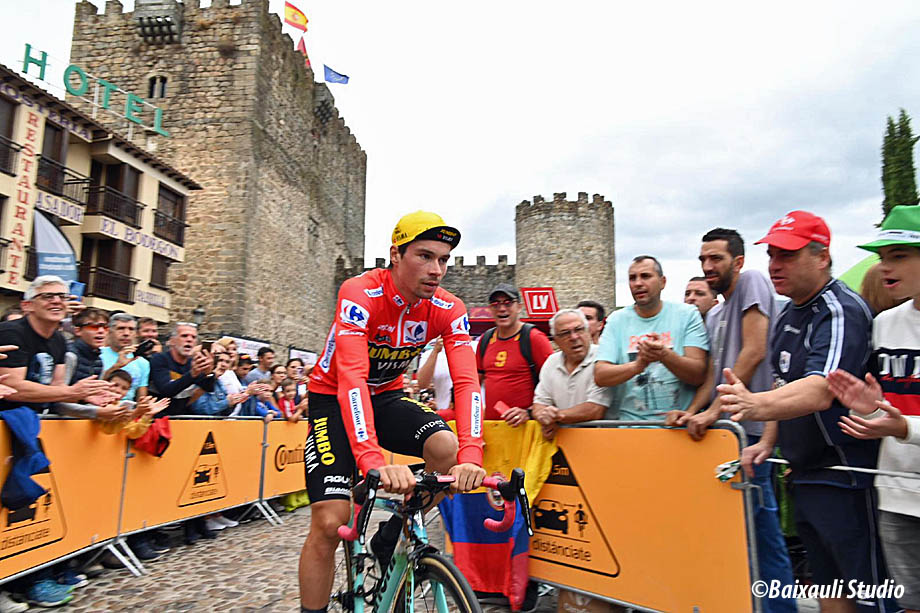 Twelve riders in the break
Early in the stage, an early escape of twelve riders managed to break free from the peloton. Among them were Sergio Samitier, Ruben Guerreiro, Nicolas Edet and Damien Howson; these four would stay out front the longest. The other eight were eventually dropped and caught by the peloton. 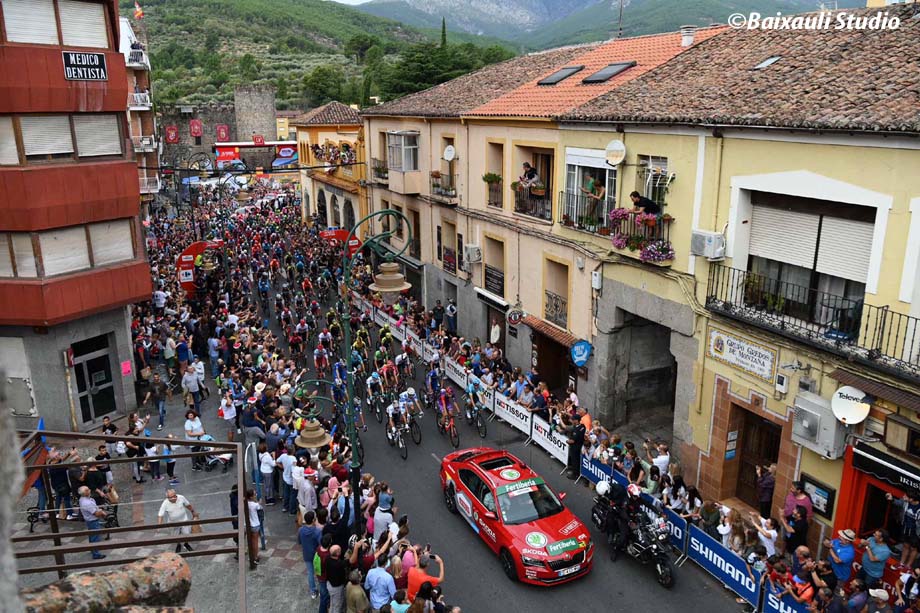 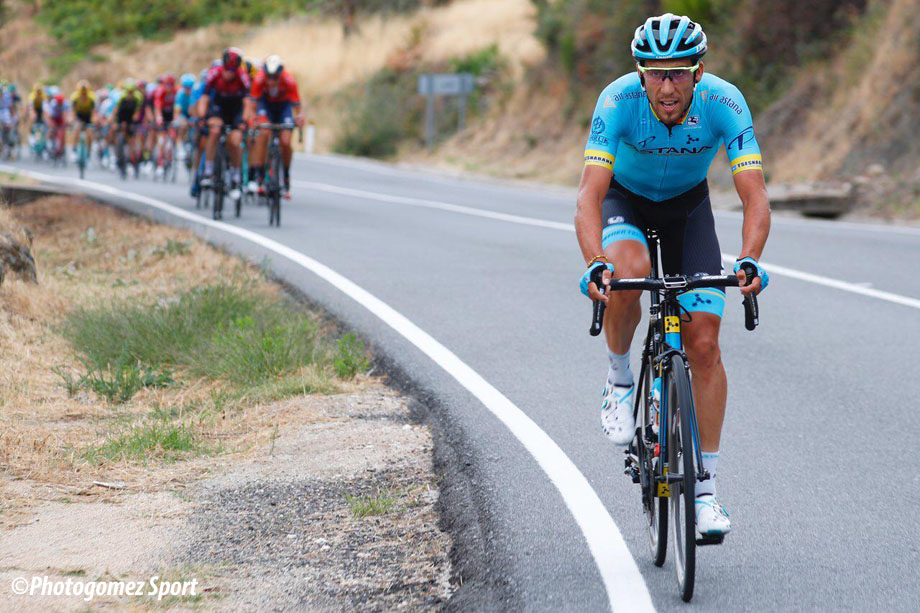 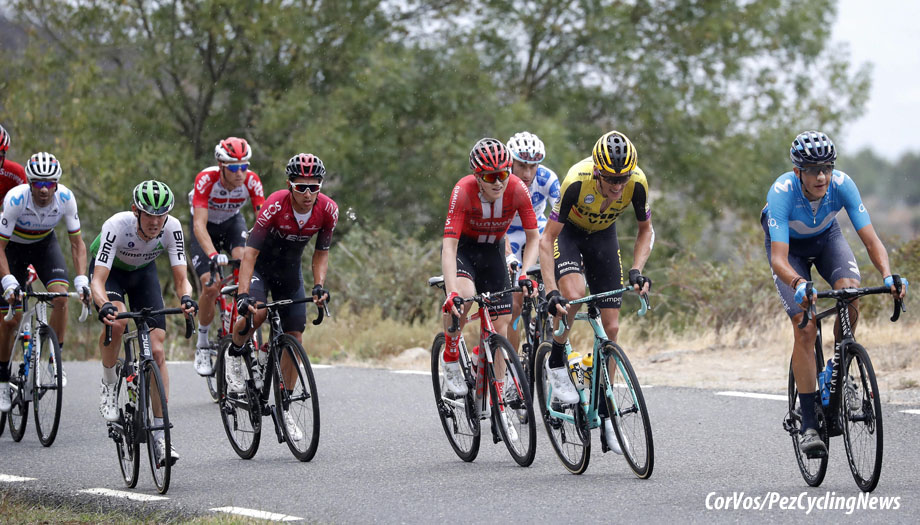 There were early attacks, but Roglic wan’t too worried 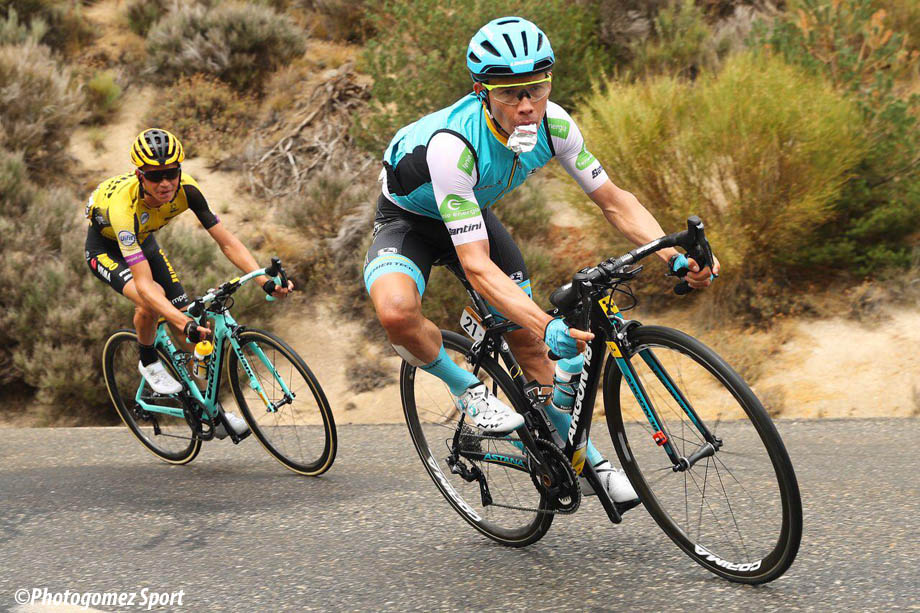 The riders were cold and wet – López was also hungry

Jumbo-Visma restored order
After these attacks it stopped. Jumbo-Visma managed to restore order with Sepp Kuss and Robert Gesink. Many riders had been dropped from the pack, while the leading group had also been thinned out considerably. Jumbo-Visma eased off the pace and the front group’s lead increased again. At that point the five riders up front were working hard: Guerreiro, Samitier, Edet and Howson from the early escape, and Tao Geoghegan Hart, who had managed to make the crossing. 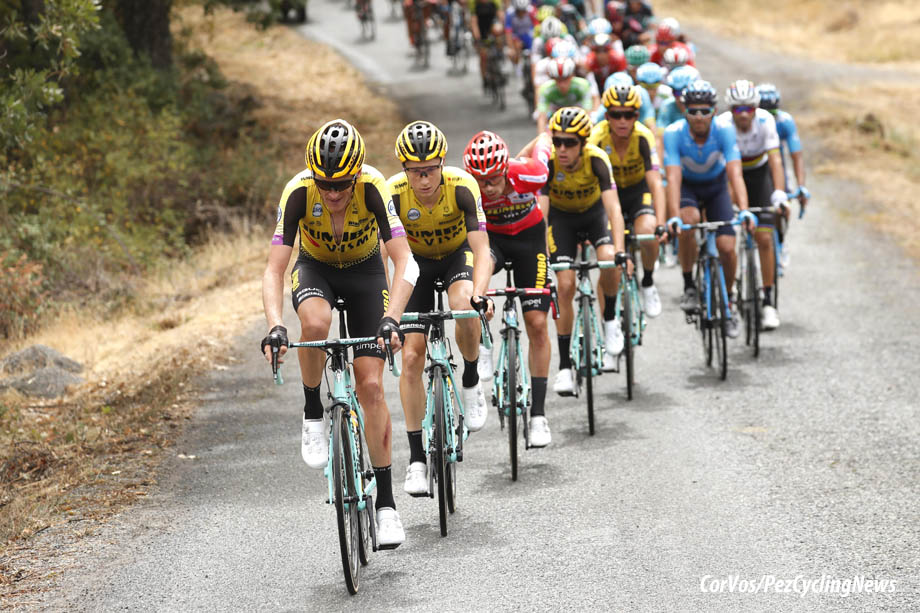 Jumbo-Visma were in control most of the stage 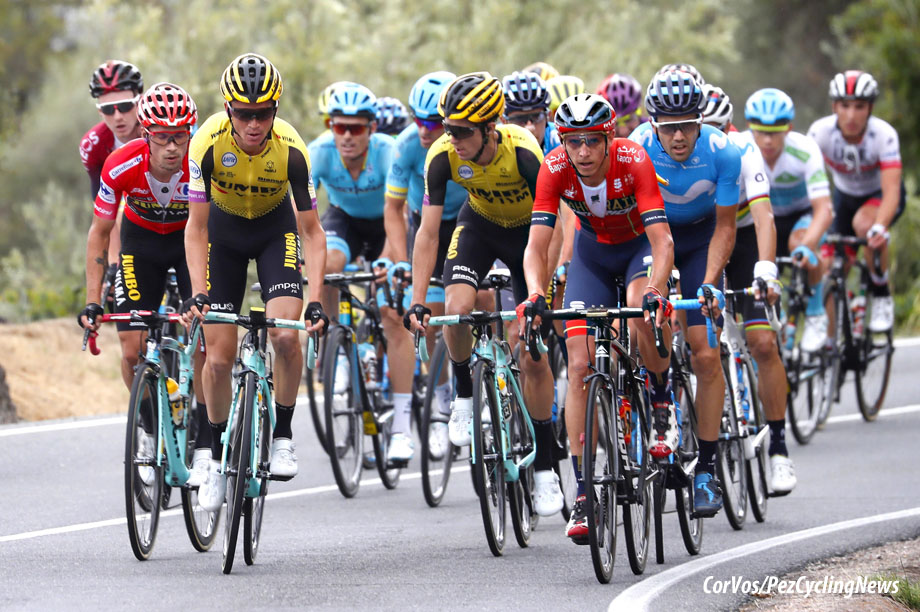 Astana launch López
On the run-up to the Puerto de Pena Negra, the lead of the five had risen to 4 minutes. Would there be a new attack from Astana or Movistar? It came before the penultimate climb. Astana put pressure on in the valley, further diluting the peloton and narrowing the gap to the leading group. Once they started climbing the Puerto de Pena Negra, it became clear what the plan of the Kazakh team was, as López immediately launched an attack. 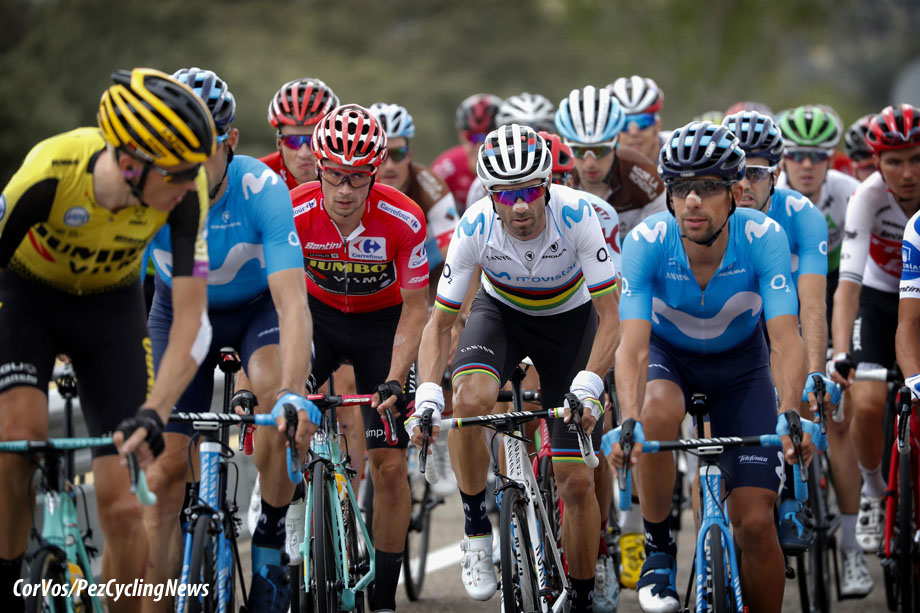 Roglic had to watch Valverde 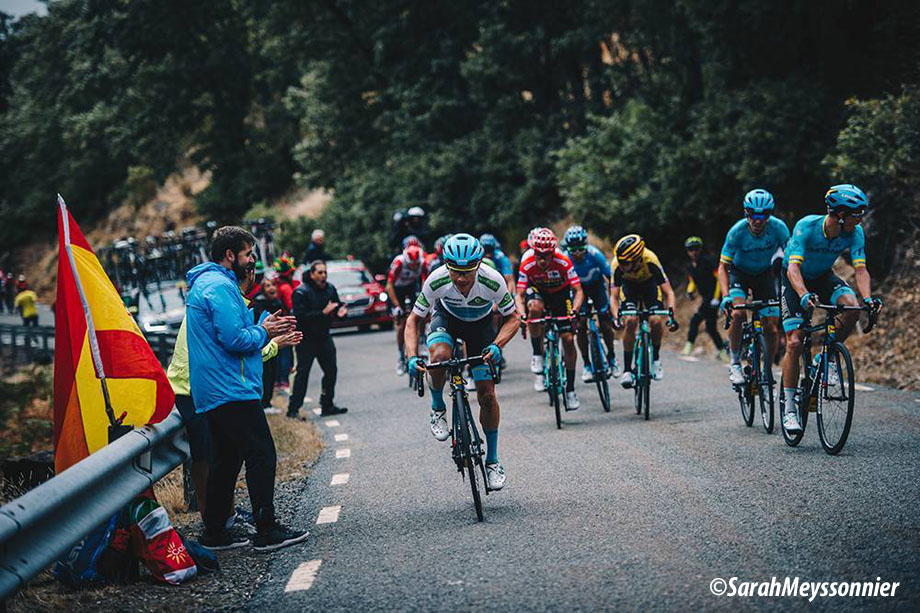 López put in some attacks

Plan López nipped in the bud
However, the Colombian was unable to get away. Quintana, Valverde, Pogačar and Roglič were right on his wheel. López also had no success with his second attempt. The action then fell silent and some riders, including Wilco Kelderman, Carl Frederik Hagen, Rafal Majka, Marc Soler and Robert Power, were able to rejoin the GC group. 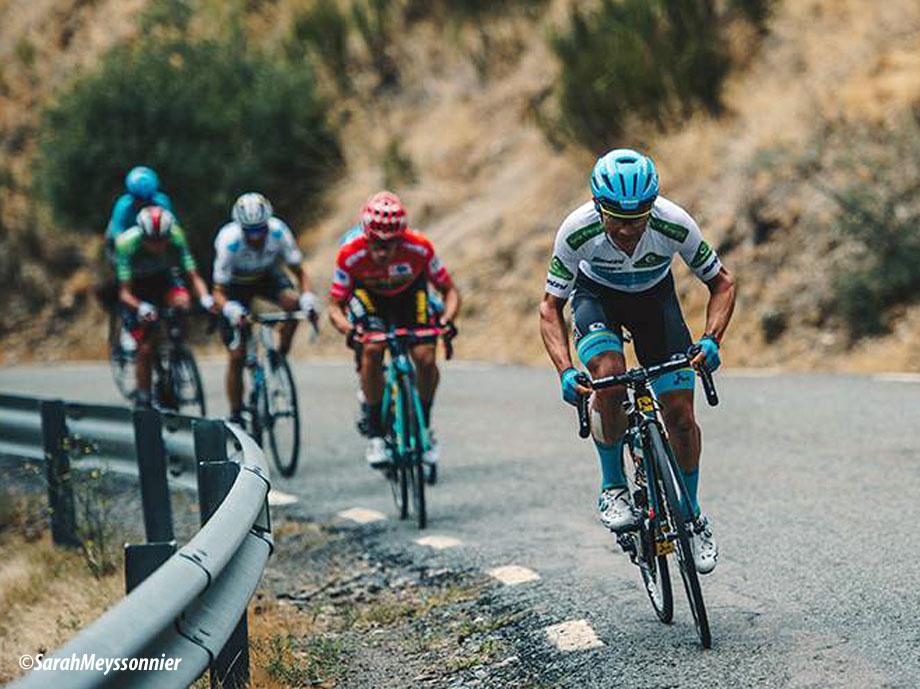 What was the Astana plan? 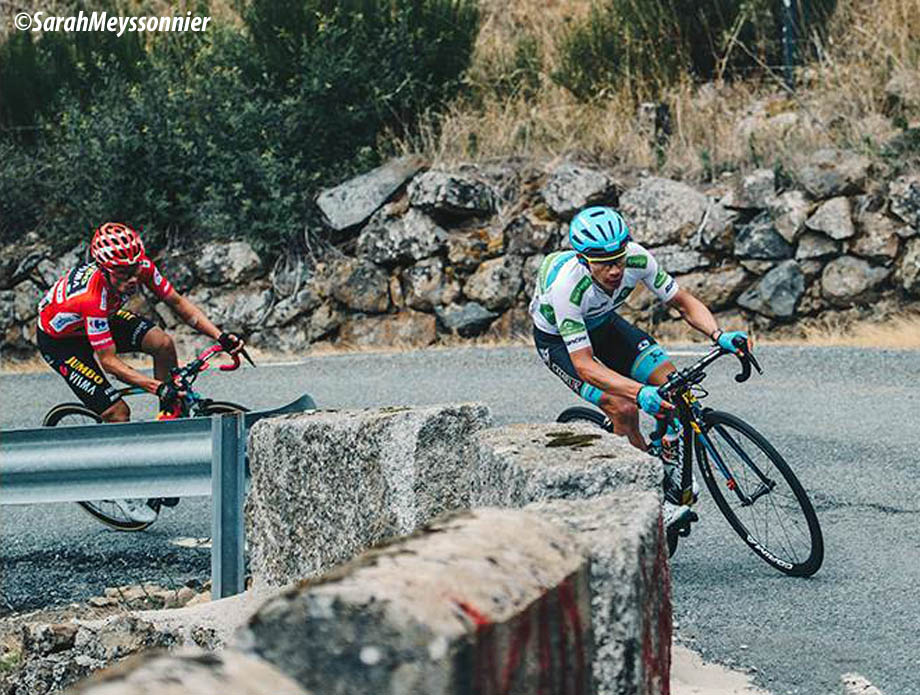 Pogačar on the hunt for third stage victory and the podium
Pogačar made use of the lull and attacked the moment the favourites looked at each other. Within a kilometre, Pogačar managed to take 30 seconds and the break. Guerreiro and Hart were caught and dropped. Movistar did not immediately see the danger of Pogacar. The Spanish armada had let the Slovenian take more than a minute and a half, before Antonio Pedrero and Soler were put to chase work. That didn’t help much as Pogačar only rode further away. 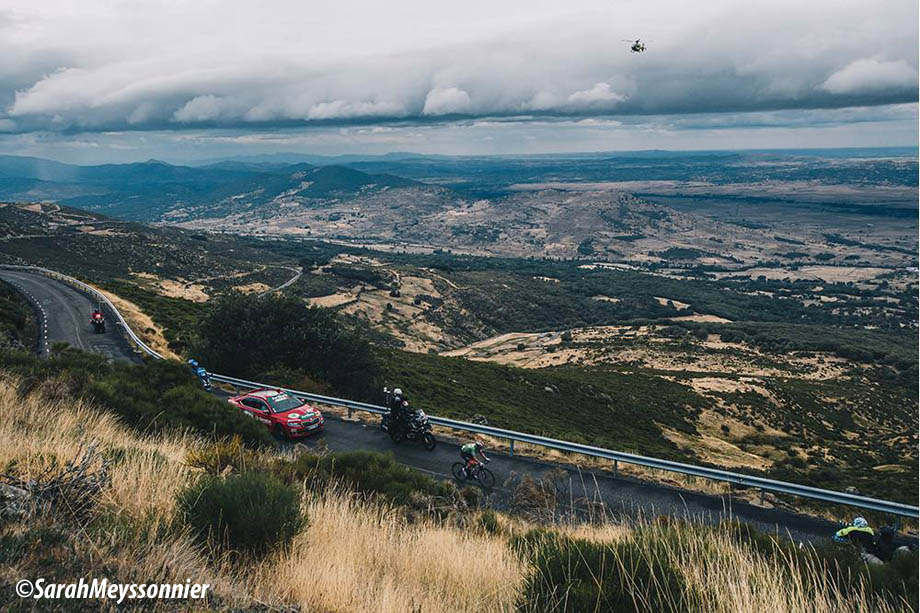 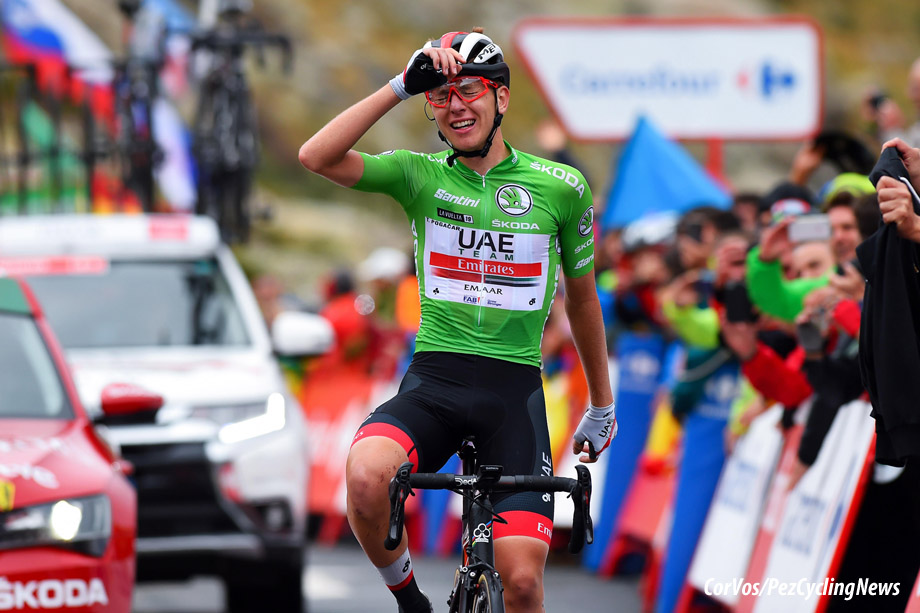 The young winner can’t believe it!

López and Quintana were the losers, Pogacar the big winner
On the final climb to Plataforma de Gredos, Quintana and López had to do the chasing for themselves. Pogačar’s lead was stuck around 1:40, which was enough to push Quintana off the podium, but just not enough to threaten Valverde’s second place. With a large lead on the competition, the Slovenian could celebrate his third Vuelta stage victory. 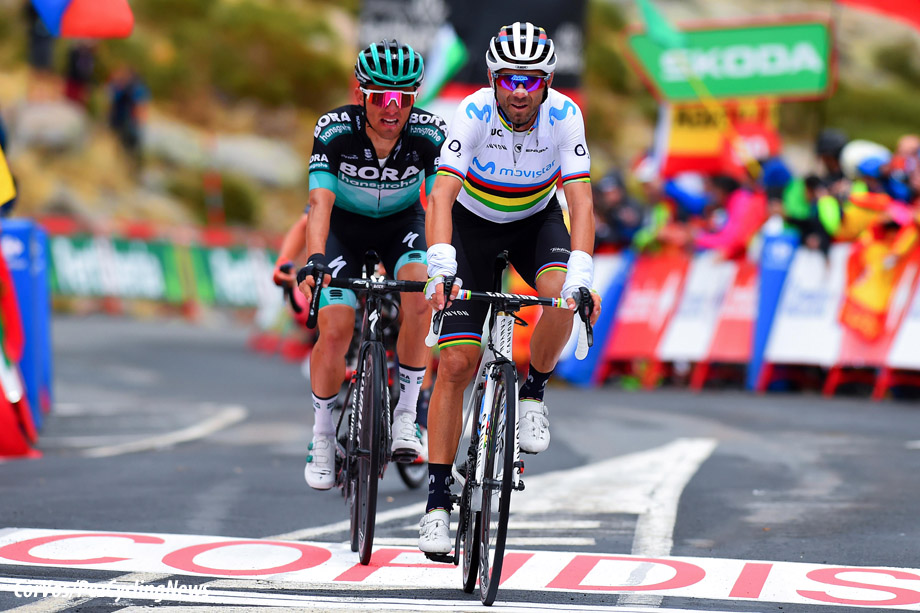 Alejandro Valverde made sure of his 2nd overall place

Roglic almost 2019 Vuelta winner
Valverde rode away from the group of favourites in the final kilometres, but Roglic kept the Spaniard in sight. With one more stage to go, barring accidents, the Slovenian will win this Spanish Grand Tour. Valverde will be second and Pogacar third. 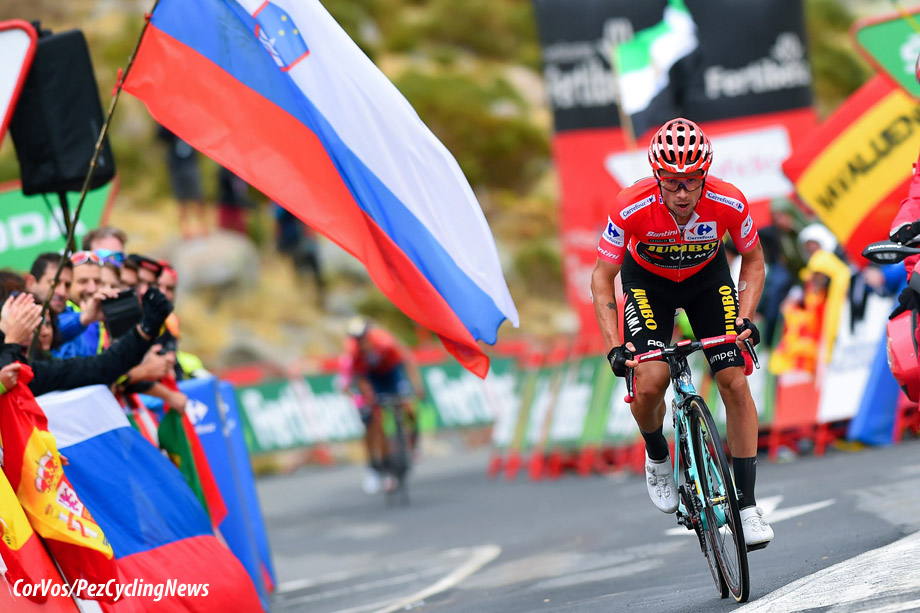 Primoz Roglič covered all the attacks

Stage winner, ‘Best Young Rider’ and 3rd overall, Tadej Pogacar (UAE Team Emirates): “It definitely took patience. My legs felt good but the morale wasn’t that high in the first part of the stage. Then I saw everybody was uncomfortable with the cold and the rain. I felt good in the last climb and I attacked. Lopez had done a big effort and I chose the right moment. I had good support on the road from Slovenian fans, from my family and from the team car. They gave me incredible motivation, and I went full gas for last hour. They make it easier for me. It was incredible, with so many emotions. I don’t realise that I’ve won three stages in my first Grand Tour. I barely realise I’m gonna be on the final podium of La Vuelta. It will be an honour to stand on the same podium as Alejandro Valverde and Primoz Roglic. It’s really incredible. I never imagined this. It will take me some days to understand what I’ve done.” 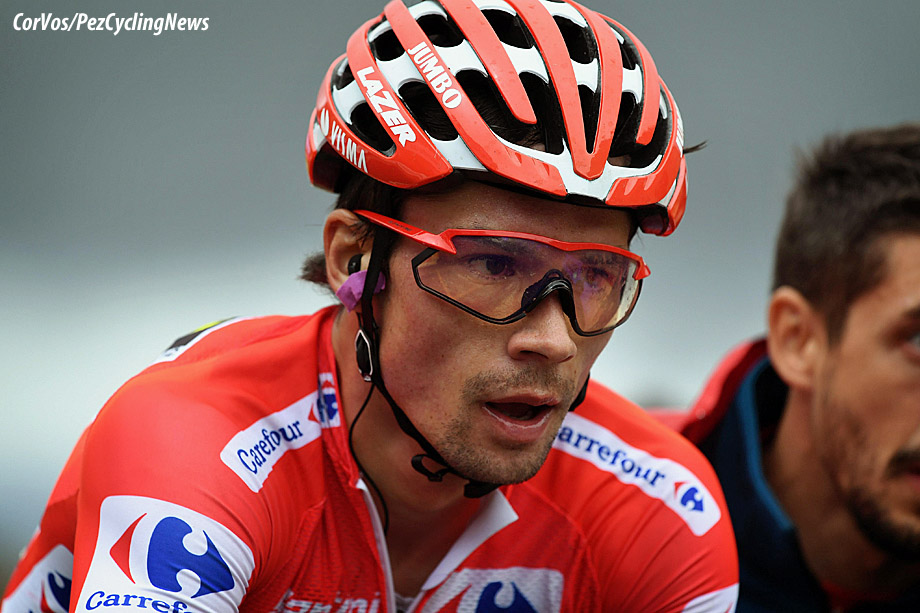 One day to go

Overall leader, points leader and 5th on the stage, Primoz Roglic (Jumbo-Visma): “I’m just relieved. It was the last really hard day in the mountains. A Slovenian won again, it’s nice. The closer we get to the end, the harder it gets. I stayed in my position and I’m really happy. It was a really hard day for us. I crashed quite hard yesterday. But we’ve shown in the past days we are really strong and we showed it again today. Everyone did an amazing job. Tomorrow is the last day, I’m looking forward to it. Until now, I was only smiling only in secret. It’s a nice feeling not to have big mountains anymore, but there’s still one day. And then hopefully tomorrow we can smile even more. I don’t want to compare teams against each other. We have strong guys and obviously we can fight for the win in almost every race and that’s the most important. Hopefully we’ll fight stronger in the coming years.”