By Alastair Hamilton On Aug 30, 2019
Share
Like PEZ? Why not subscribe to our weekly newsletter to receive updates and reminders on what's cool in road cycling?

Vuelta Stage Report: World champion Alejandro Valverde (Movistar) won the seventh stage of the Vuelta a España after a battle royal on the steep finalé of the Mas de la Costa. Valverde out-sprinted Primož Roglič (Jumbo-Visma) just ahead of Miguel Ángel López (Astana) and teammate Nairo Quintana. Dylan Teuns (Bahrain-Merida) couldn’t follow the action, so López is back in the red jersey of overall leader. 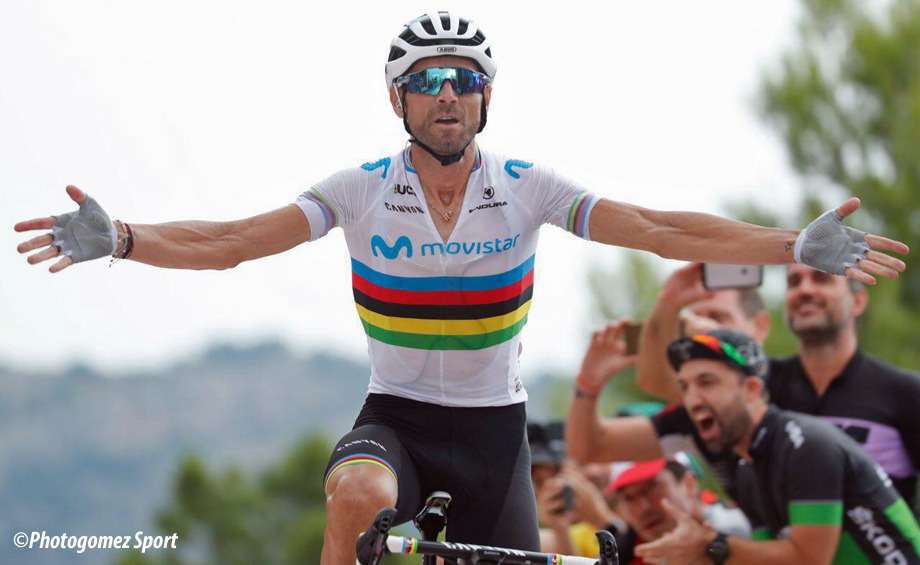 For the third day in a row of the 2019 Vuelta a España, the finish was uphill. The final climb to Mas de la Costa is only 4 kilometres long, but with an average ramp of 12.3% and peaks to 25% it’s a tough finalé. Before the start of the stage, Davide Formolo announced he would not start. The Italian National champion suffered too much from the consequences of a yesterday’s big crash.

The first 80km hug the coastline passing over flat terrain. The second part heads inland in the province of Castellón with two 2nd category climbs and another two 3rd category mountain passes before the finish at the extremely challenging Mas de la Costa, which will test the overall favourites, who will need to keep an eye on the rivals if they don’t want to lose time.

At the start of the stage the pace was very high as a fierce battle for the early break developed. Tejay van Garderen (EF Education First) had to dropout after the injuries of the previous day. After 66 kilometres the lead group formed, including Gianluca Brambilla, Philippe Gilbert, Sebastian Henao, Sergio Henao, Quentin Jauregui, Stéphane Rossetto, Michael Storer and Jelle Wallays. 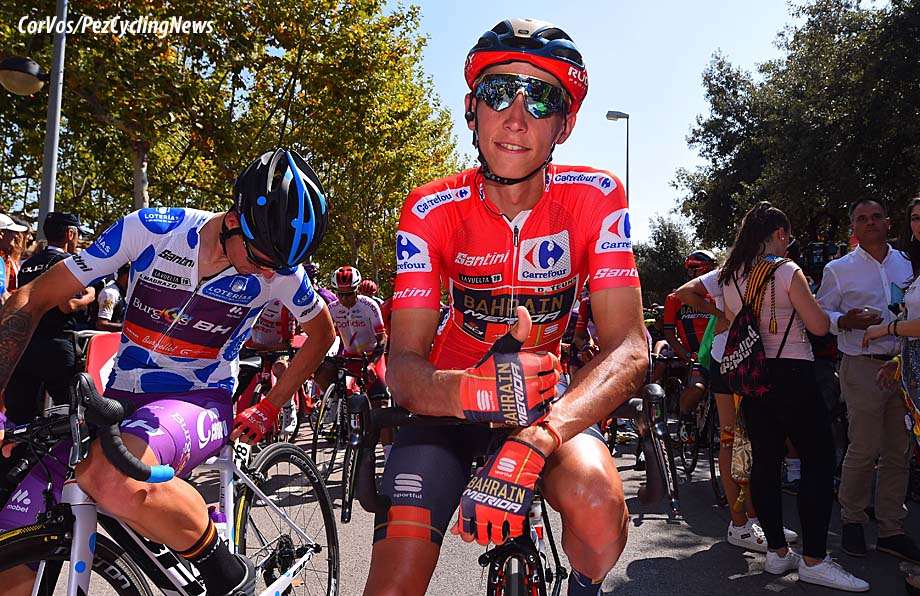 Dylan Teuns had his day in red

Ten escapees took three and a half minutes
Cyril Barthe and Tomasz Marczynski managed to cross, giving us 10 up front. Brambilla was the best overall at just under 9 minutes from the red jersey, Dylan Teuns. At the start of the Puerto del Marianet, the first climb of the day after 90 kilometres, the lead of the break had risen to more than 3:30. Sergio Henao was the first to the top for the 3 KOM points. 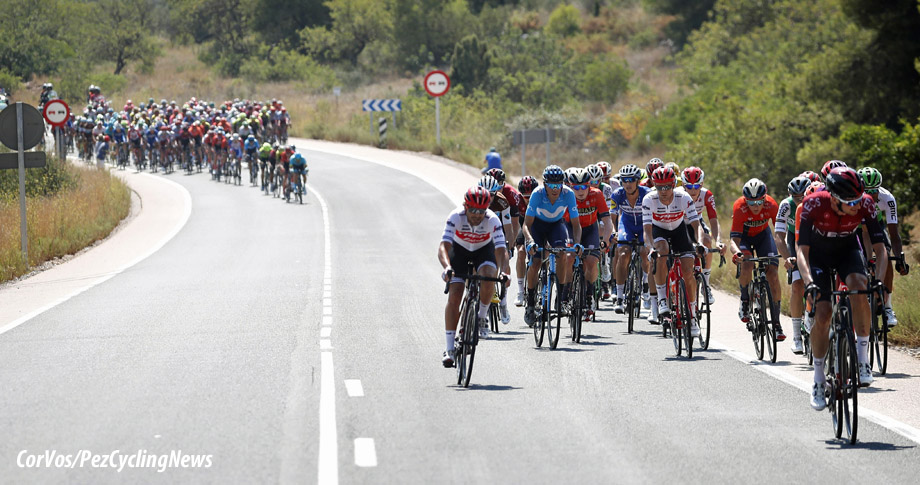 On the second climb; the Puerto de Eslida, was first again, as the leading group extended the gap to 5 minutes. Henao also took the full points on the third climb, with still around 60 kilometres to go to the finish. Movistar then took control of the peloton, and the lead dropped further and further down to 2:30 at the foot of the fourth climb of the day. 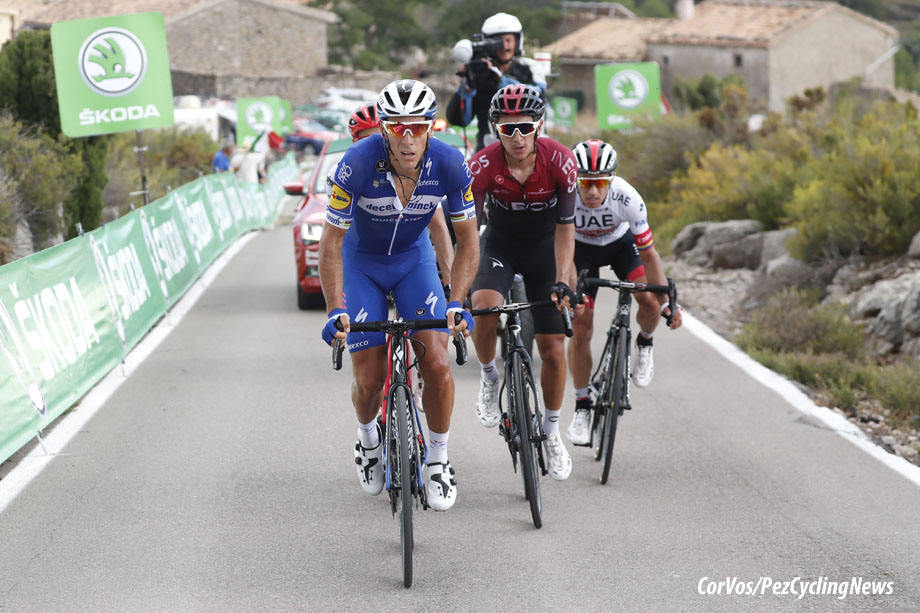 On the Puerto del Salto del Caballo the break collapsed when Gilbert, Sergio Henao and initially Marczynski attacked. The Pole couldn’t follow, so the Belgian and the Colombian continued their move together. The acceleration of Movistar not only had consequences for the leading group; at 27 kilometres, overall leader Dylan Teuns was dropped. 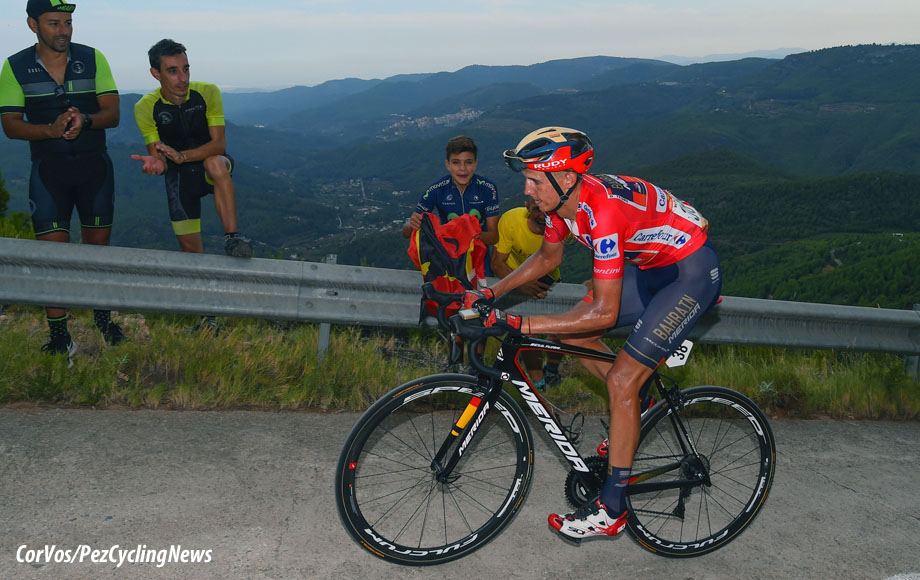 The red jersey was in trouble 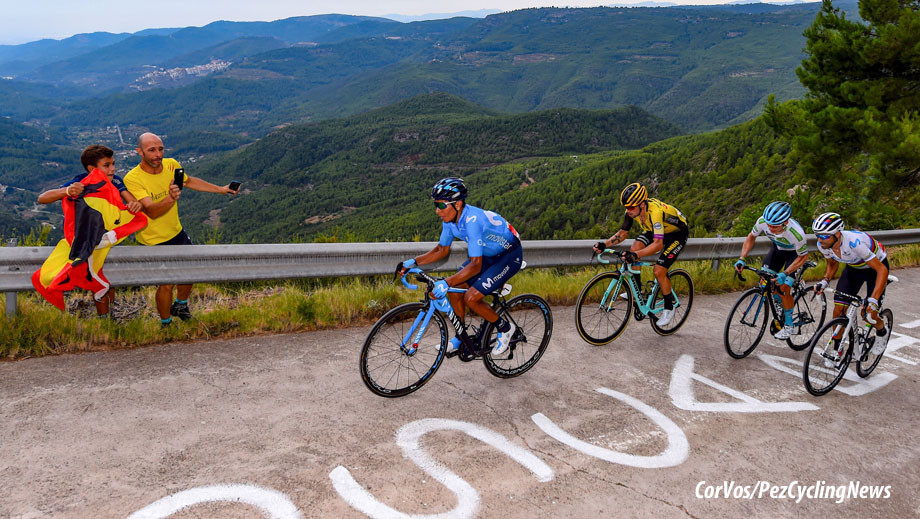 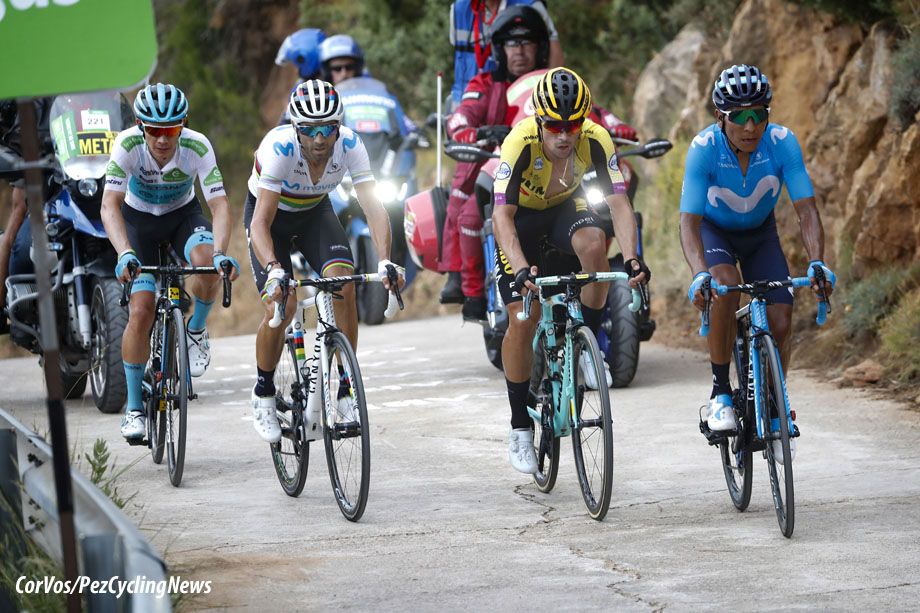 Quintana made the first attacks

The battle for the stage victory would end in a duel between the favourites. On the final 4 kilometre final climb, Nairo Quintana started the hostilities, after which only Roglič, López and Valverde were able to stay with the Colombian. Quintana attacked three times, but none of the other favourites was going to crack. Roglič and López always found an answer to his accelerations, as Valverde watched on. 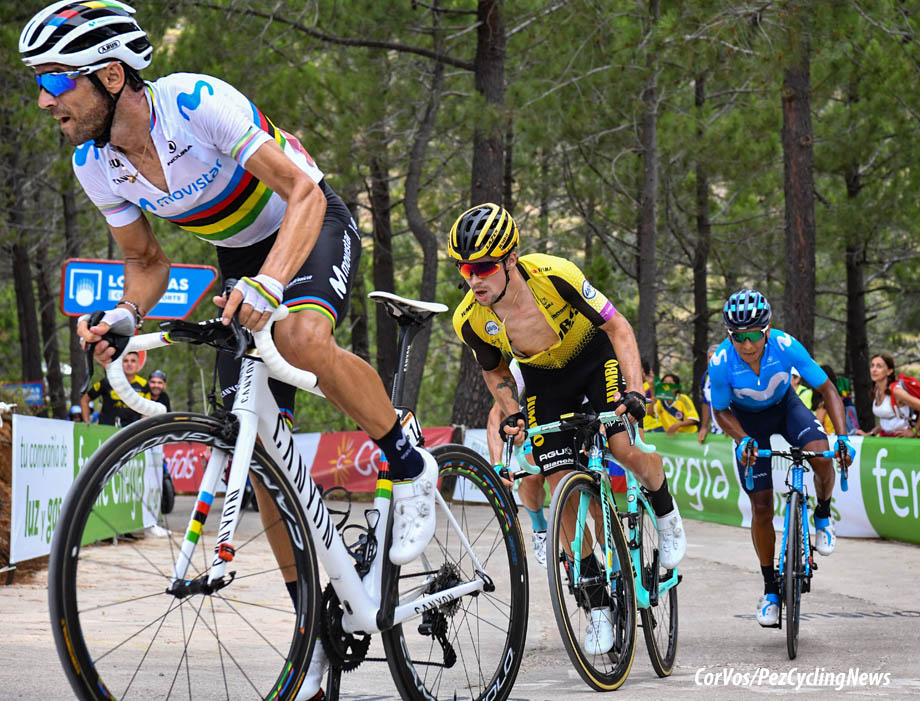 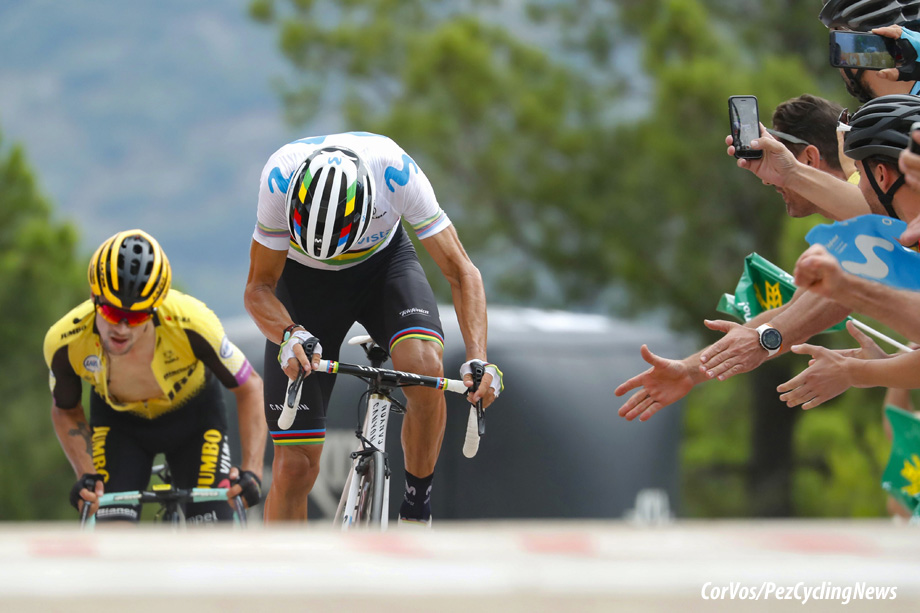 It was Valverde who finished the job off

Quintana led the foursome into the final kilometre, with López, Roglič and Valverde on his wheel. On the sharp section of up to 20%, the favourites watched each other with suspicion. At 450 meters from the finish line, Valverde then moved to the front with Roglič on his shoulder. The Slovenian was the only one able to follow Valverde’s sprint, but the win was for the Spanish World champion. López was 3rd and moved back into the overall lead. 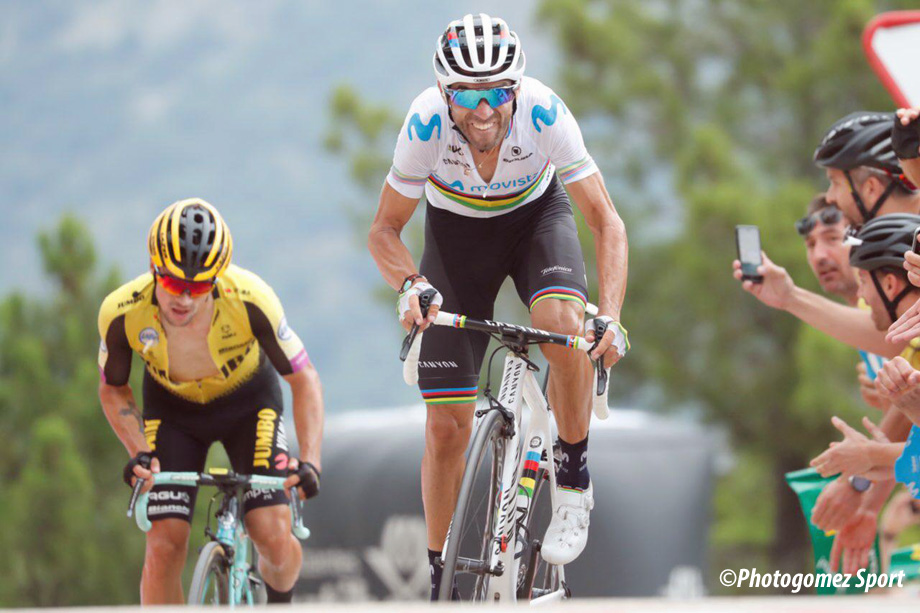 The finish was made for the champ! 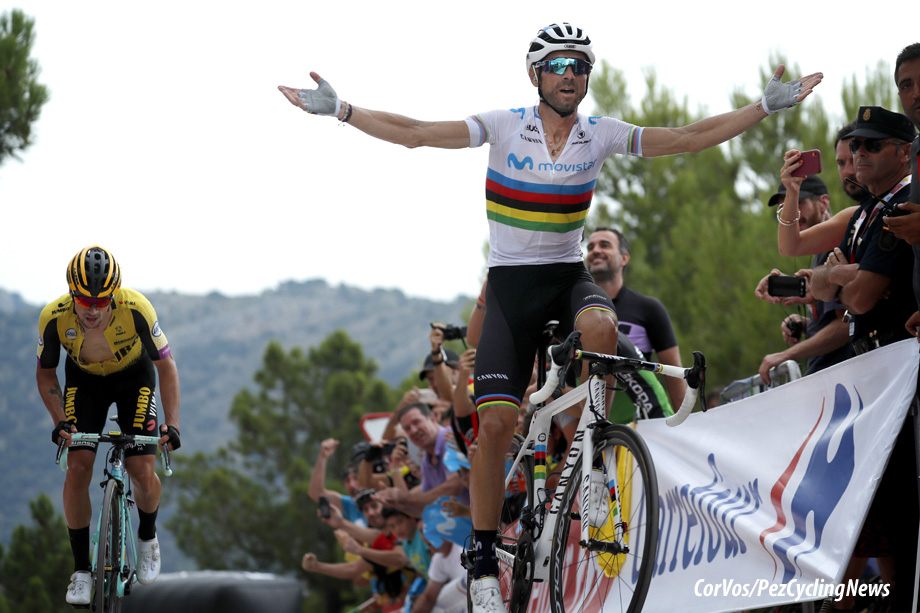 In the end, the World champion was too good for the others

Stage winner and 3rd overall, Alejandro Valverde (Movistar): “First things first, I want to thank my team for their great work, especially Nairo [Quintana] for his help on the final climb. We wanted to drop Primoz Roglic and Superman López, but they were very strong too and it just wasn’t possible. We’ve kept a good pace the whole time, and that helped me get this victory. I was confident I could win because I reckoned I was amongst the best four in the race. In my mind, maybe I needed this victory. Had I won or not, it would have been okay either way, but I had winning legs and I fancied victory today. It’s even more special with the rainbow jersey. There is a lot of La Vuelta left, but it seems today’s top four are the strongest of the race at this point.” 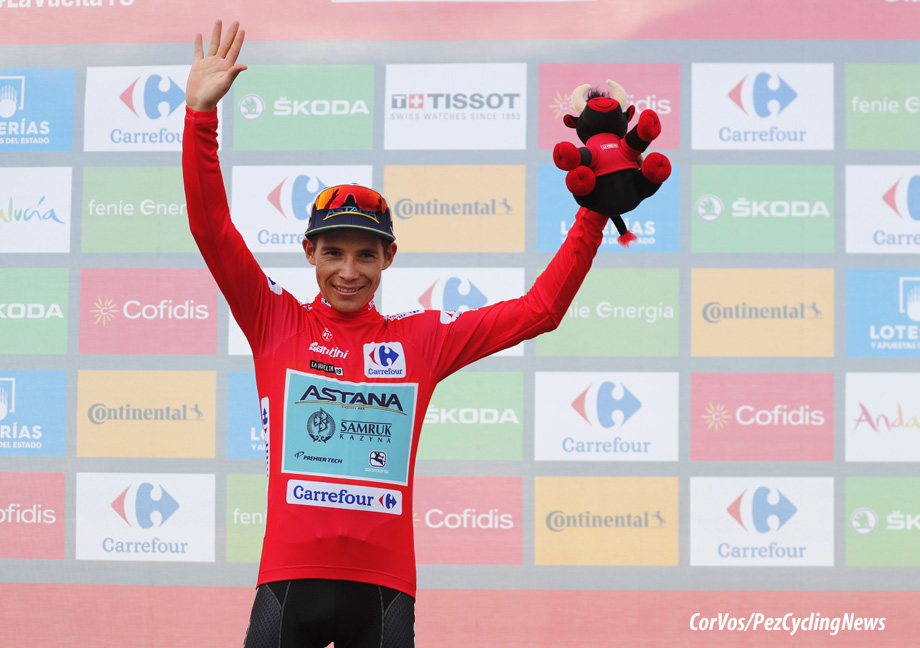 Overall leader and 3rd on the stage, Miguel Angel Lopez (Astana): “Today was not only a hard final climb – the whole stage was demanding. We’ve been riding very fast on demanding roads. I think in the end we saw who were the riders one step above the rest. We don’t know who will be my fiercest rival. This climb suited Valverde better, because it was short and explosive, so we can’t read too much there. We’ve seen a different scenario in Javalambre, with a different type of climb. The stage in Andorra is better for my characteristics, with longer climbs and that’s good for me. We have good memories from Andorra and I hope to create some more this week-end. La Vuelta is still long. I want to enjoy La Roja.”