Vuelta Stage Report: Sunweb’s Nikias Arndt won a rain-soaked stage 8 of the Vuelta a España. The German was the strongest rider of the early break that splashed its way in to Igualada after 166.9 kilometres. Frenchman Nicolas Edet (Cofidis) moved into the overall lead with 3 minutes on Miguel Ángel López of Astana. 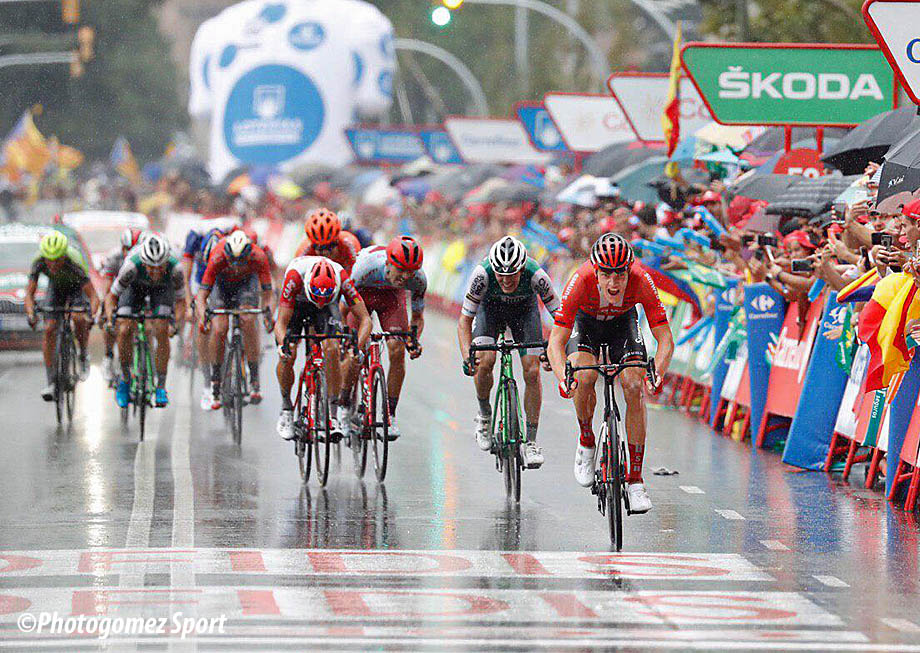 A mid-mountain stage due to the nature of the landscape the race passes through rather than the actual climbs involved. The Puerto de Montserrat, towards the end of the stage, will be a key moment when the sprinters’ teams will have to decide whether to control the race and prepare a final sprint or let the breakaway go for the victory.

The Vuelta started the second week with a transition stage through a rolling Catalan hills. After three summit finishes, the riders had a different type of stage today with only one categorised climb. An early break of 21 riders was soon up the road and building a nice lead. 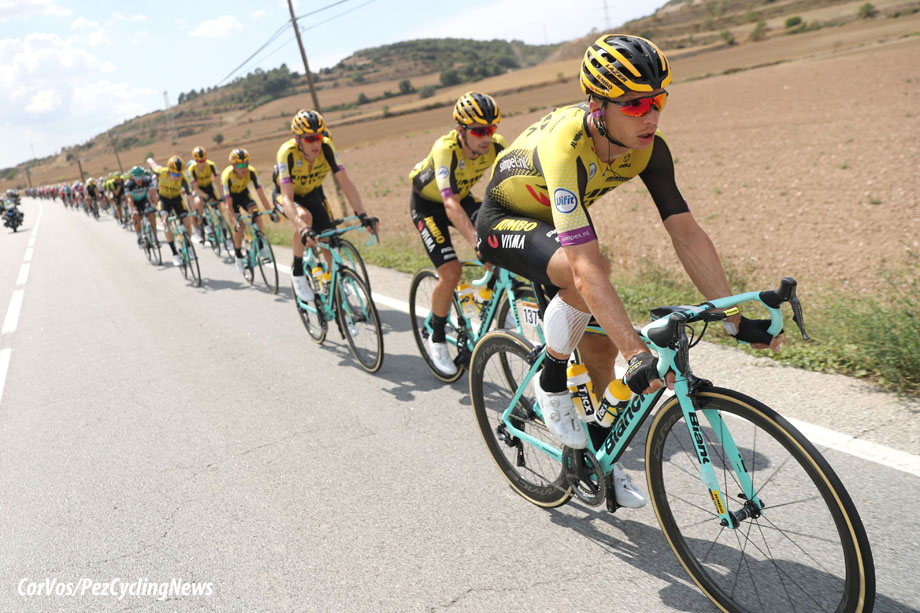 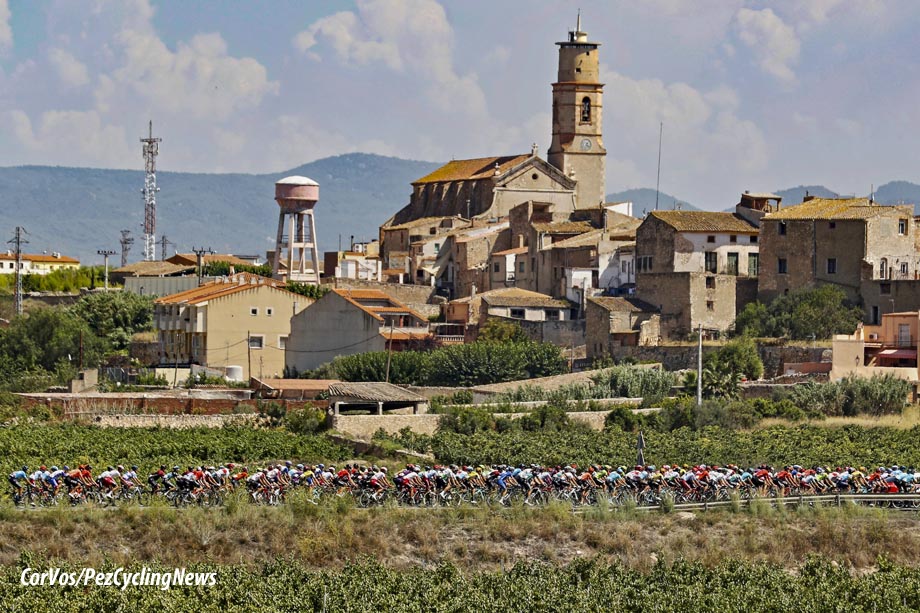 Mostly dry, with a downpour promised 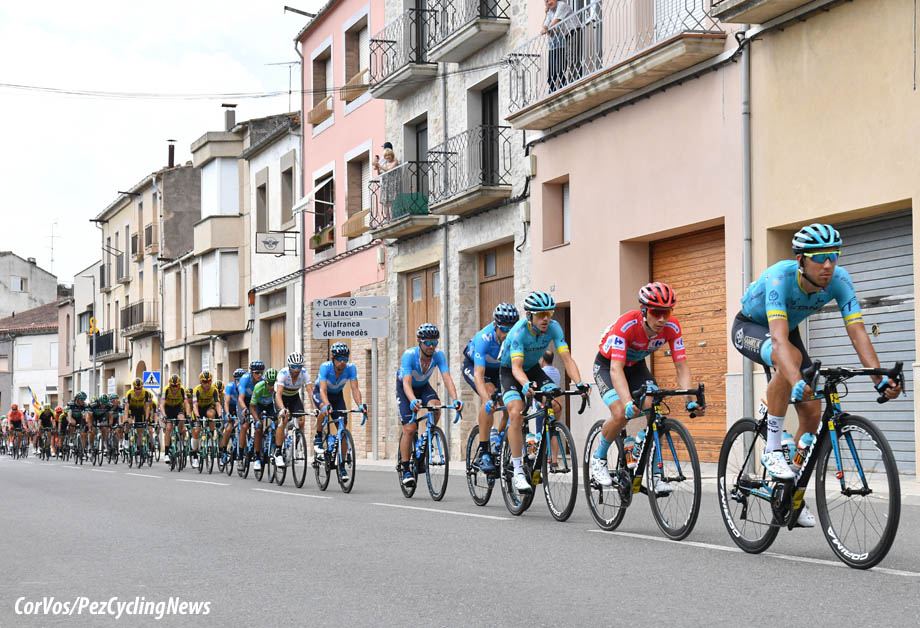 Astana didn’t try too hard behind the break

The peloton let the big break go. The Astana team of overall leader Lopez took control of the peloton and set the pace of the chase. The Frenchman Edet (at 6:24 to Lopez) was the best classified rider and was soon in virtual red. 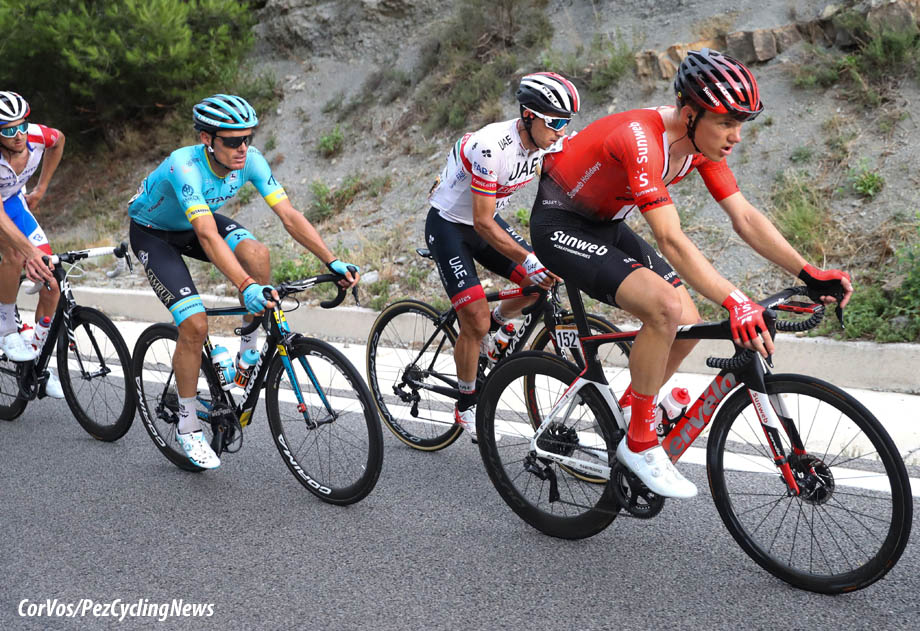 The break knew they could go all the way 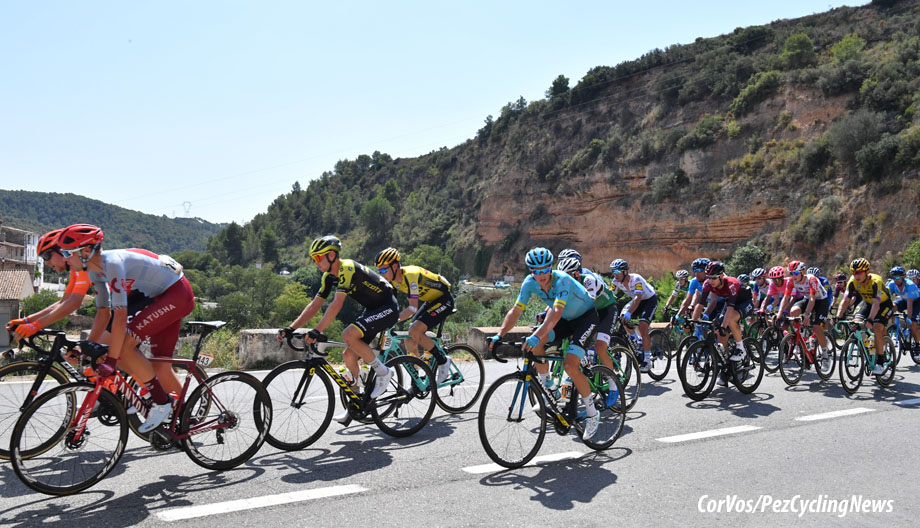 Stetina opens the final
The Puerto de Monserrat was the only climb that counted for the KOM. Stetina was the first to attack the break, and was the first to cross the summit, he was soon joined by Barcélo and Herrada, but they were pulled back by a larger group on the descent. 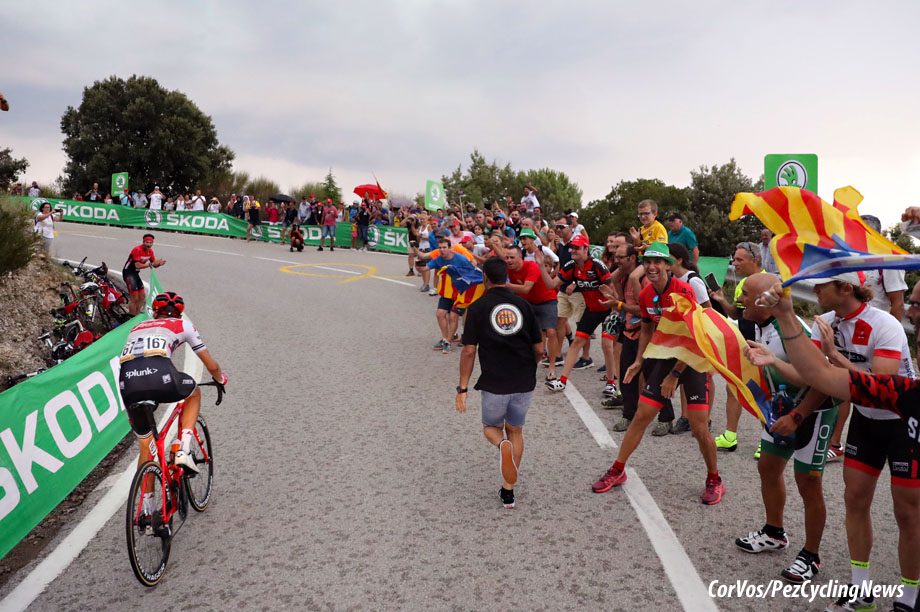 Stetina put in a big attack, but maybe a bit early

As they started to get close to the finish in Igualda it started to rain. An acceleration from Guerreiro was followed by a counter reaction from Barcélo. Tusveld and Aranburu also put in attacks, but in the finalé the others were close behind the four. Tusveld took a round-about too fast and slid to the ground. The others came together 3 kilometres from the line. 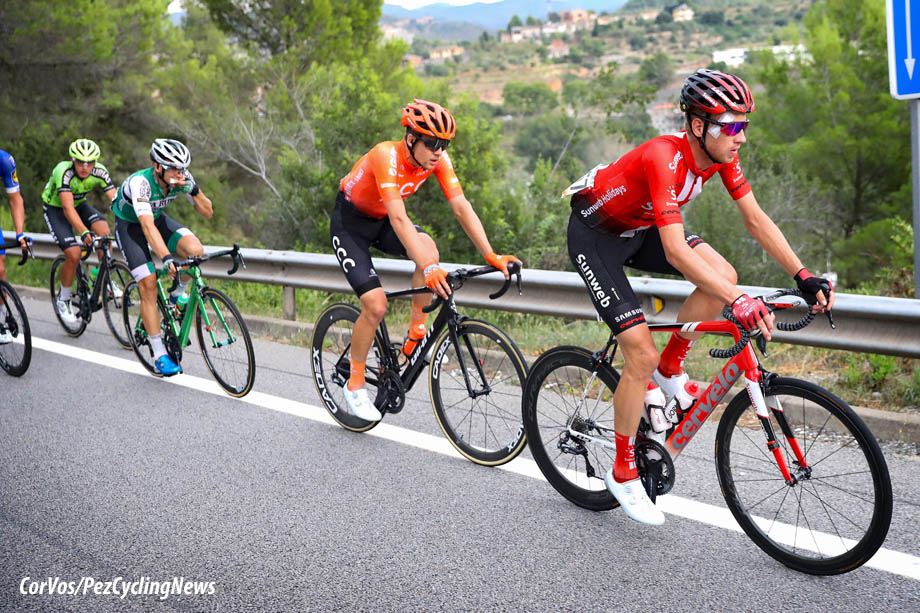 Martijn Tusveld crashed on the run in

Ludvigsson tried for a solo, but was pulled in by Stybar. The Czech went past, but couldn’t take a gap. In the sprint for the win, Arndt had the fastest final kick. He finished ahead of Aranburu and Van der Sande to give his Sunweb team a huge boost with his stage victory after the loss of Nico Roche during the week. 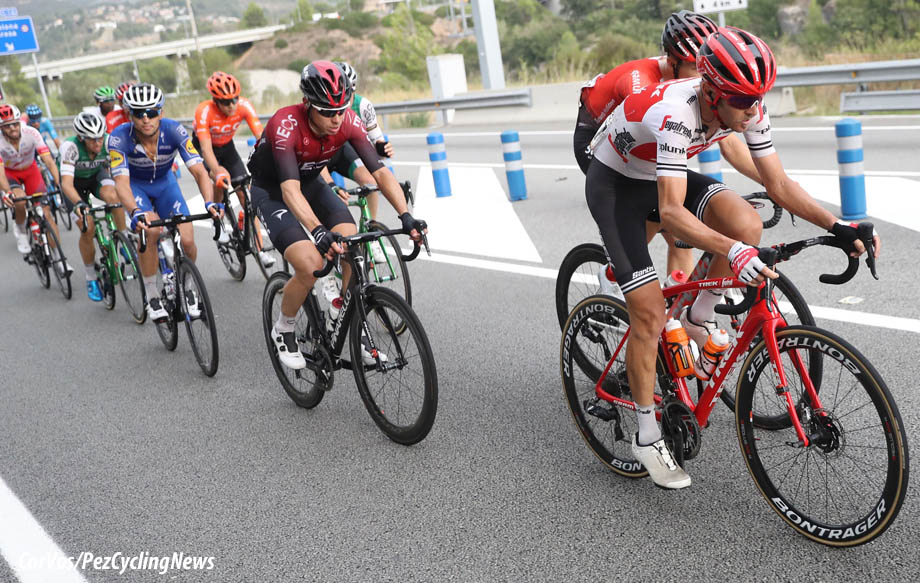 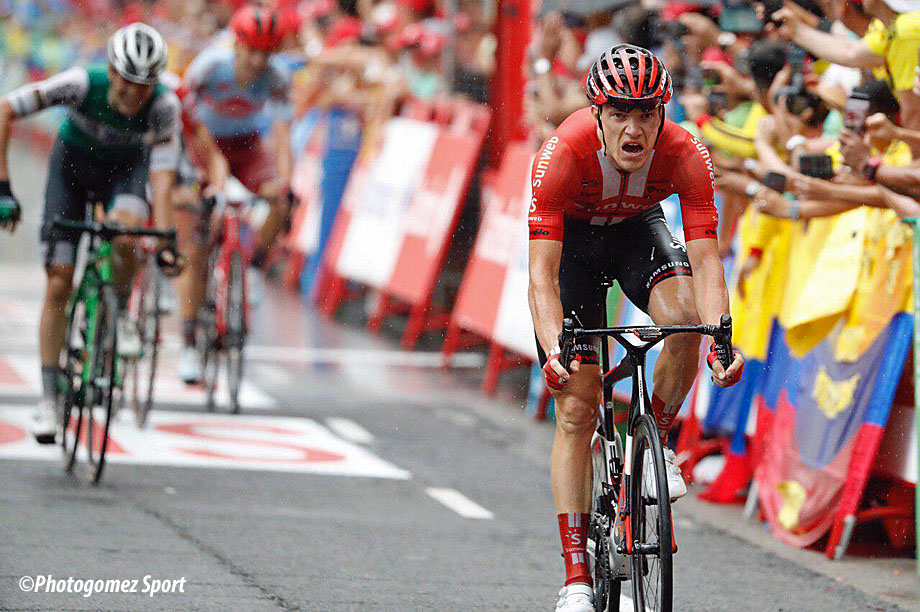 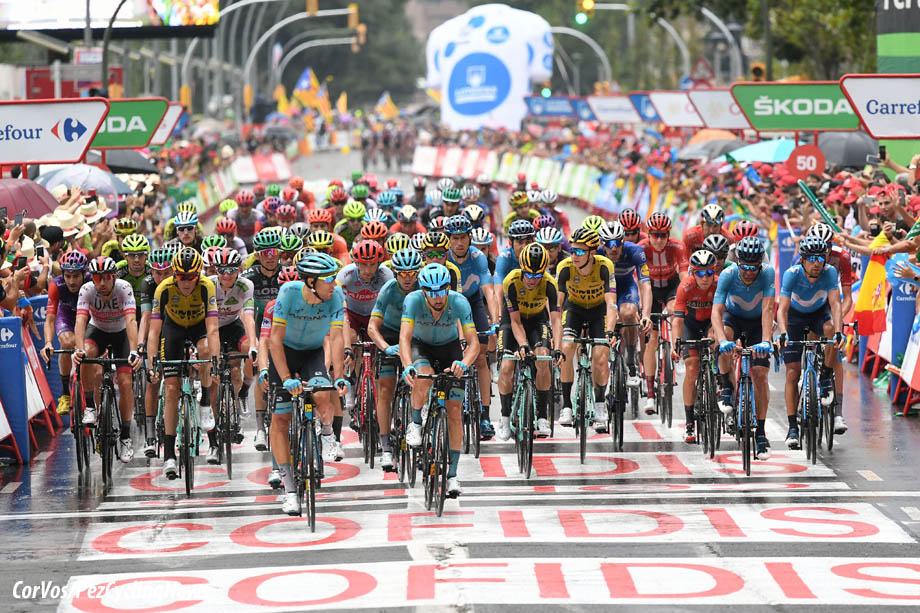 The peloton with overall leader Lopez, finished at 9 minutes

Stage winner, Nikias Arndt (Sunweb): “It’s amazing. Yesterday I said already I wanted to be on the break. But to actually be there, and able to get victory, is unbelievable. I got great support from Martijn [Tusveld] during the stage. He was on the front, covering all the moves, and I could sit in, go smooth over the climb and wait. When Martijn crashed, I knew I had to chase every attack and keep things together because I knew I could win from a sprint. This is one of the best days of my career. I’ve always said I want to win a stage in every Grand Tour and this is a step forward on that goal. When I crossed the line I still couldn’t believe I’d won a stage on La Vuelta. I guess I sprinted on the saddle because I was too tired as to stand on the pedals, yet I could produce enough power as to get the victory.” 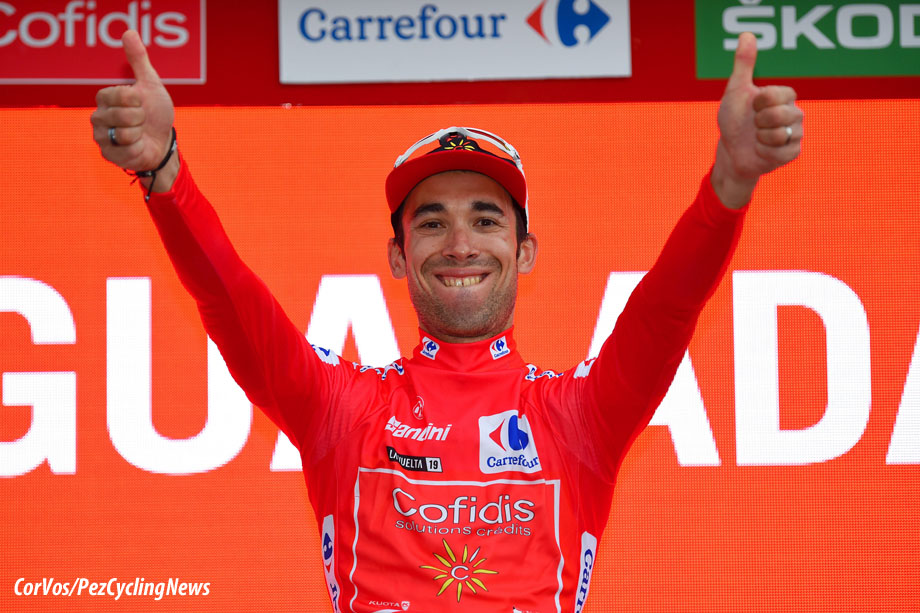 Yet another overall leader

New overall leader, Nicolas Edet (Cofidis): “They told me Bernard Hinault had taken the leader’s jersey in Igualada too. He has so many records, it’s nice to share one with him. It’s a nice story. To claim La Roja is something totally different than a stage victory or the Polka-dot jersey I won in 2013. To be on the podium in Madrid meant more than a stage victory. Here, it might very well have been the opportunity of a lifetime to take the leader’s jersey and I had to seize the opportunity. I had La Roja in the back of my mind since the start of La Vuelta. Today, I wasn’t supposed to go in the break. I hope my DS won’t be mad about it… To climb on the podium is a reward for my family. As a rider, you make sacrifices, you don’t see your parents, your wife, your children… My daughter often asks me for a lion from the Tour de France. She’ll have the Spanish toro, it’s nice too. You have to enjoy those moments to the fullest, give it all you have and I don’t want to have any regret tomorrow after the queen stage of La Vuelta 19.”