By Alastair Hamilton On Aug 27, 2019
Share
Like PEZ? Why not subscribe to our weekly newsletter to receive updates and reminders on what's cool in road cycling?

Vuelta Stage Report: The fourth stage of the 2019 Vuelta a España was won by Fabio Jakobsen (Deceuninck – Quick-Step). The Dutchman was the fastest into the coastal town of El Puig after a relatively flat stage of 175.5 kilometres. After a dream lead-out, Jakobsen beat stage 3 winner, Sam Bennett (Bora-Hansgrohe) by a millimetre. 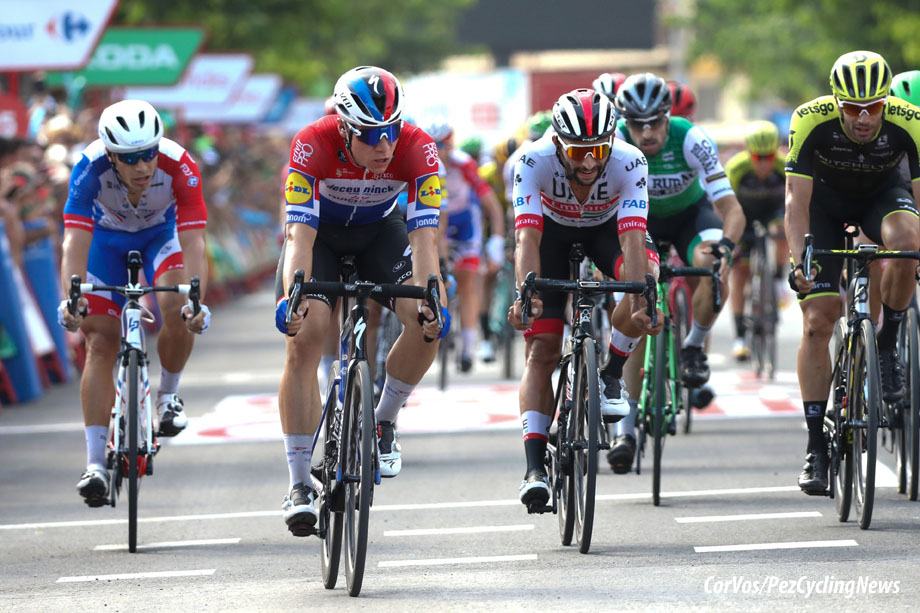 A flat stage broken up by the 3rd category climb to the Puerto del Oronet. Nevertheless, this should not be an insurmountable obstacle for the sprinters, as its top is 45 km away from the finish, giving them plenty of time to recover and prepare for another mass finish. 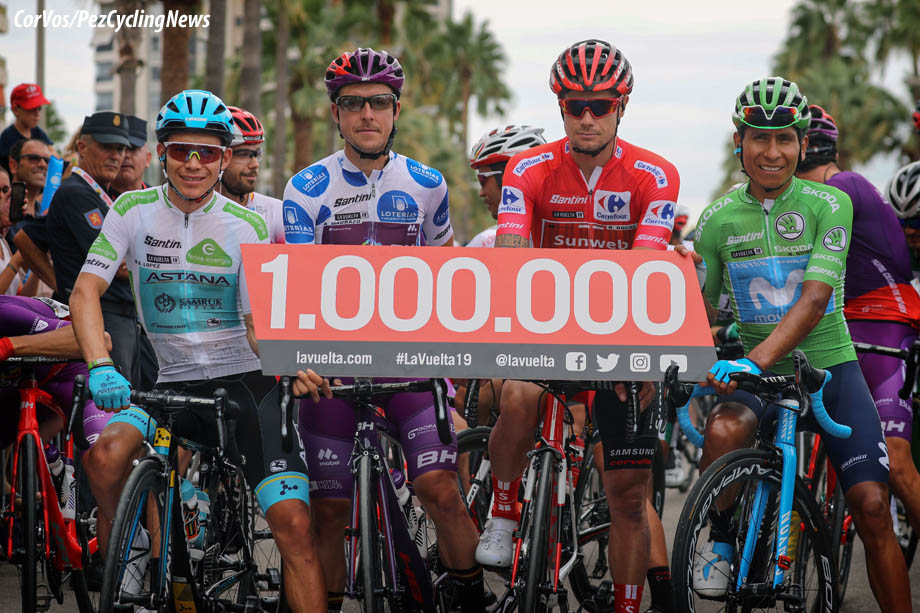 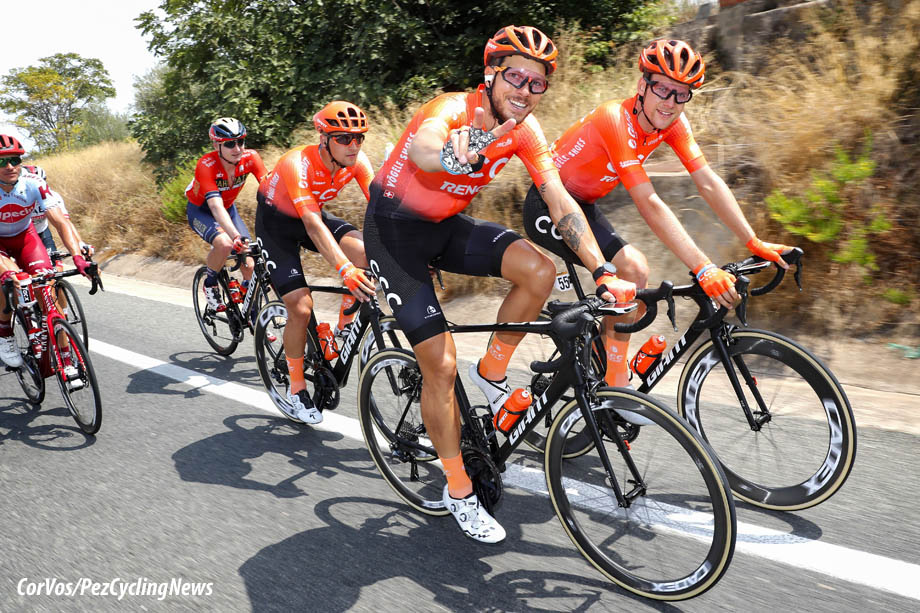 The sprinters will have circled the fourth stage between Cullera and El Puig with red in their diary, as the Tour of Spain is going into the mountains on Wednesday. The big question was who could beat Sam Bennett after his impressive stage win in Alicante on stage 3. The Irish champion could expect competition from quite a few quick men on stage 4. 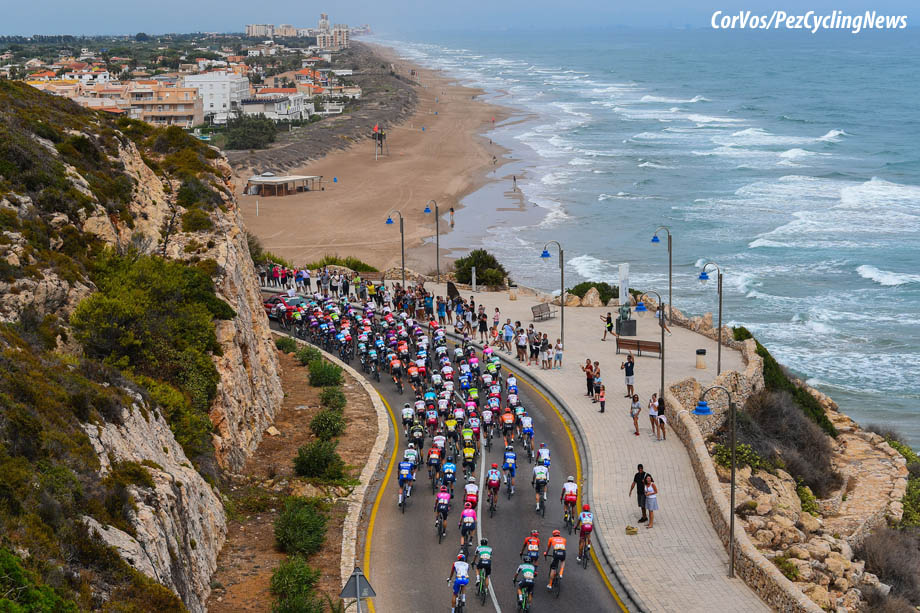 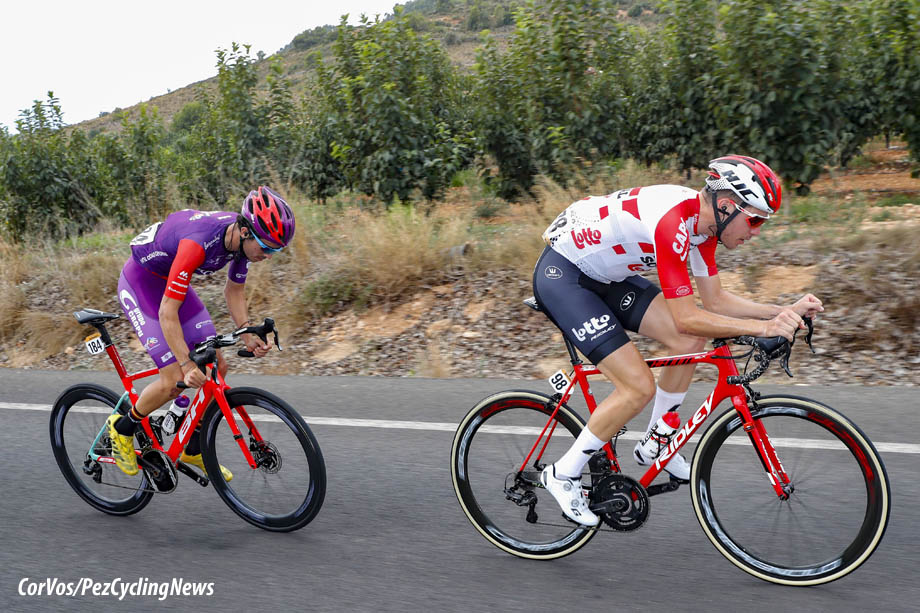 Two escapees enlivened the 175 kilometre stage up the East Spanish coast. Again a Burgos-BH rider was present, although this time it was not the KOM leader. Ángel Madrazo took the day off in the peloton, but it was his countryman Jorge Cubero who, together with Sander Armée, took almost a 7 minute lead. 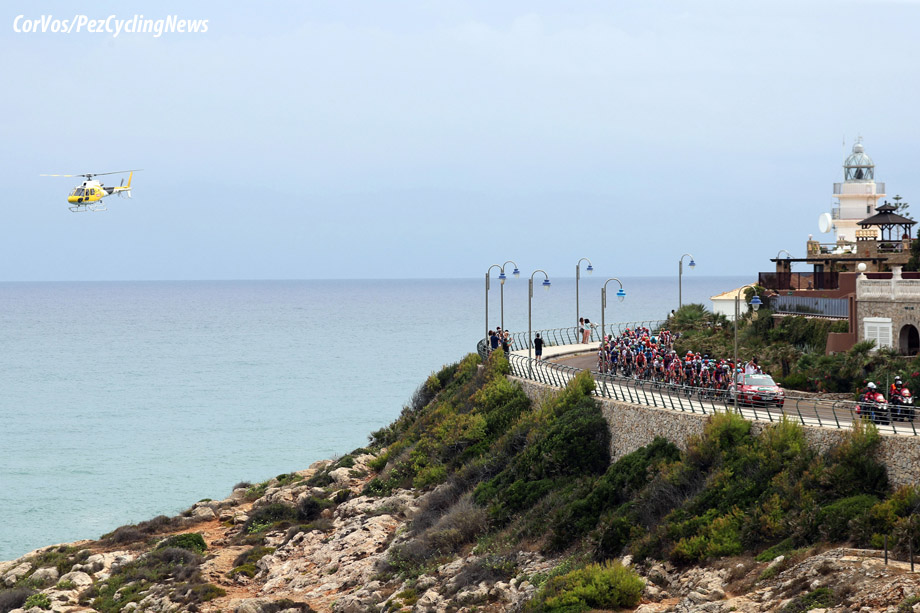 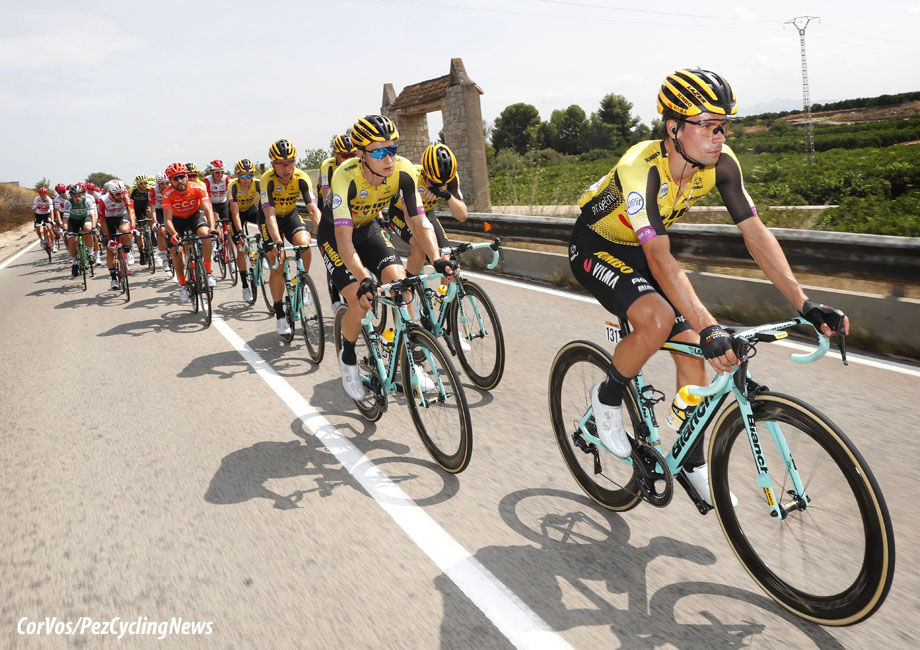 It wasn’t long before Bora-Hansgrohe and Sunweb decided to increase the pace for their sprinters Bennett and Max Walscheid, slowly pulling the duo. The meteorologists agreed before the stage that there could be heavy rain, but between Cullera and El Puig the sun was shining for most of the time. Jumbo-Visma’s Steven Kruijswijk abandoned. 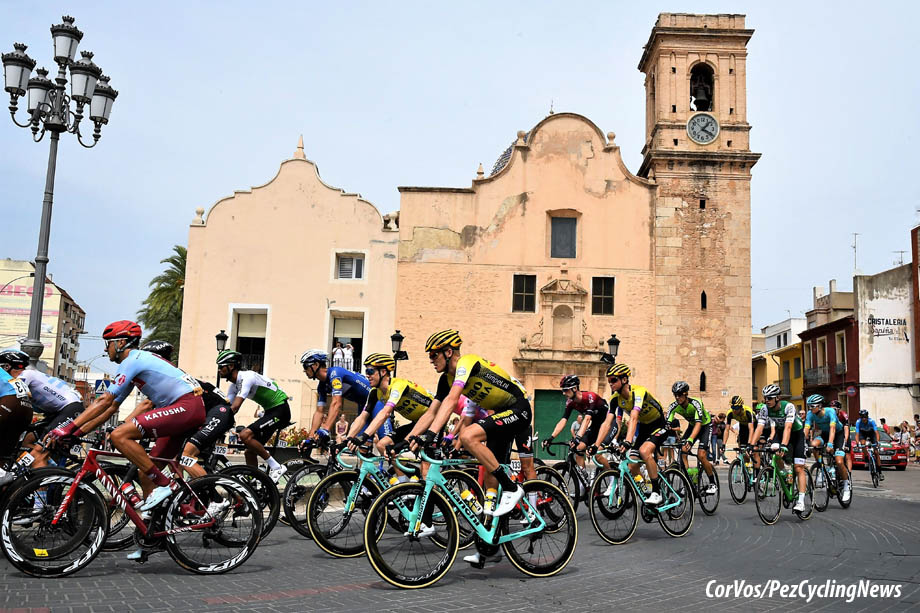 Kruijswijk was still suffering from a knee injury, which he sustained in the fall during stage 1 team time trial. The sprinters wanted to catch the break as quickly as possible. Less than 60 kilometres from the finish line Rigoberto Urán crashed. It took a while before the Colombian was back on the bike, but the leader of EF Education First managed to rejoin the peloton, thanks to his teammates, just before the foot of the only climb of the day; the Puerto del Oronet (Cat3). Not a difficult climb, but there was a lot of rain. Luckily for the riders this didn’t last too long. The two front riders stayed dry. It was Armée who took the most mountain points, ahead of his fellow escapee, Cubero. Mountain king, Madrazo won the point in the peloton. The lead was less than 2 minutes. 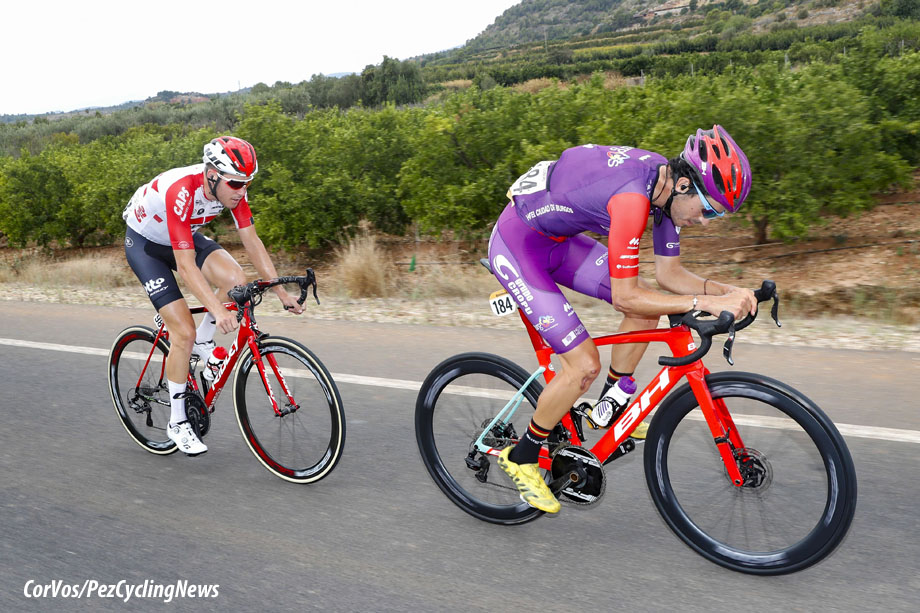 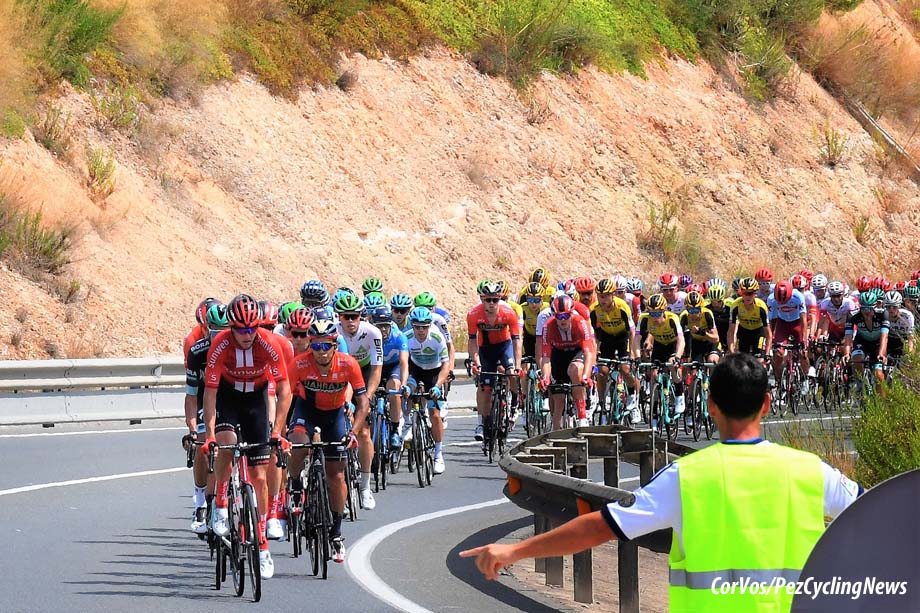 Cubero was dropped due to a mechanical problem, and Armée had to go on alone, although it was still 30 kilometres to the finish, which was too much. With 20 kilometres to go, the Belgian from Lotto Soudal was caught. EF Education First tried to take advantage of the wind 15 kilometres from the finish. The American team rode well, causing a few riders to drop off the back. The sprint favourites for all still present. 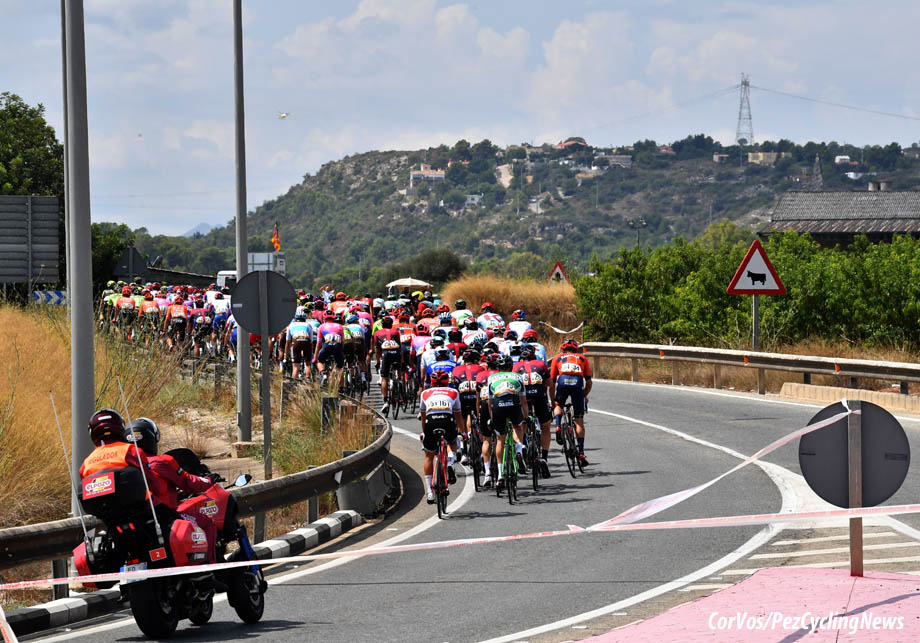 Rémi Cavagna tried to surprise the sprinters with a late attack. The Frenchman from Deceuninck – Quick-Step quickly took a nice gap, but Sunweb and Bora-Hansgrohe managed to neutralise his move. Just before the last kilometre started, Cavagna was caught and the final word would go to the sprinters. 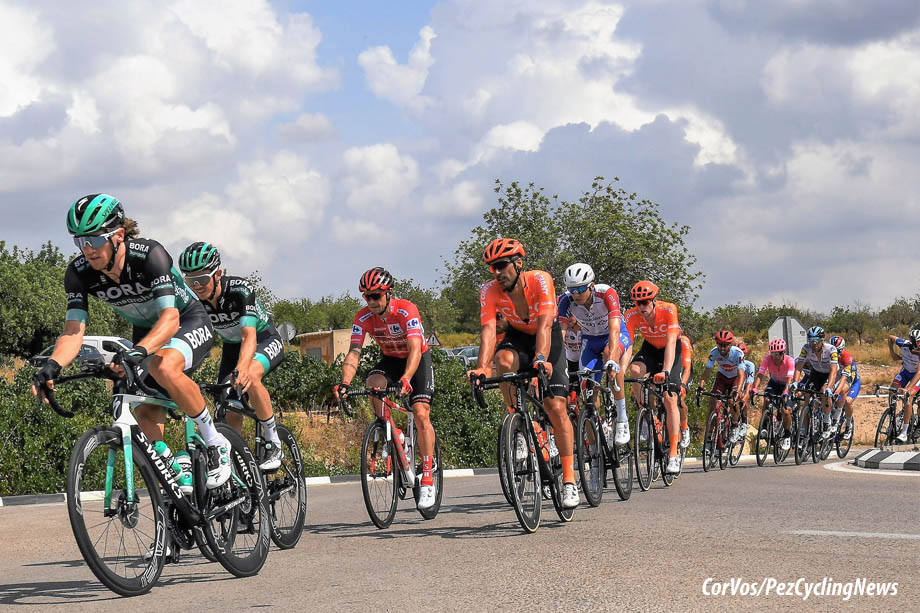 Jakobsen was in a bad position yesterday, but today the Dutch champion could count on an ideal lead-out from his teammates and last man Maximiliano Richeze. The 22-year-old rider was on the way to a convincing victory, but a fast finishing Bennett was very close. In the end the Irishman was a millimetre short for his second victory in two days, much to the relief and joy of Jakobsen. 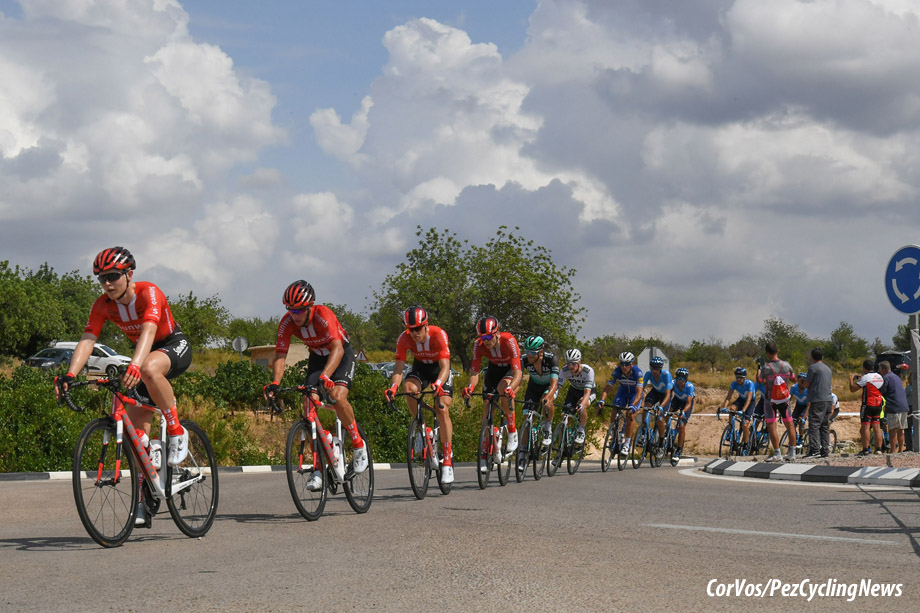 The strong German Walscheid crossed the line in 3rd place, but the Sunweb rider was put back in the result together with Juan Sebastián Molano. As a result, Fernando Gaviria moved to 3rd place, while Luka Mezgec and Marc Sarreau are now in fourth and fifth. 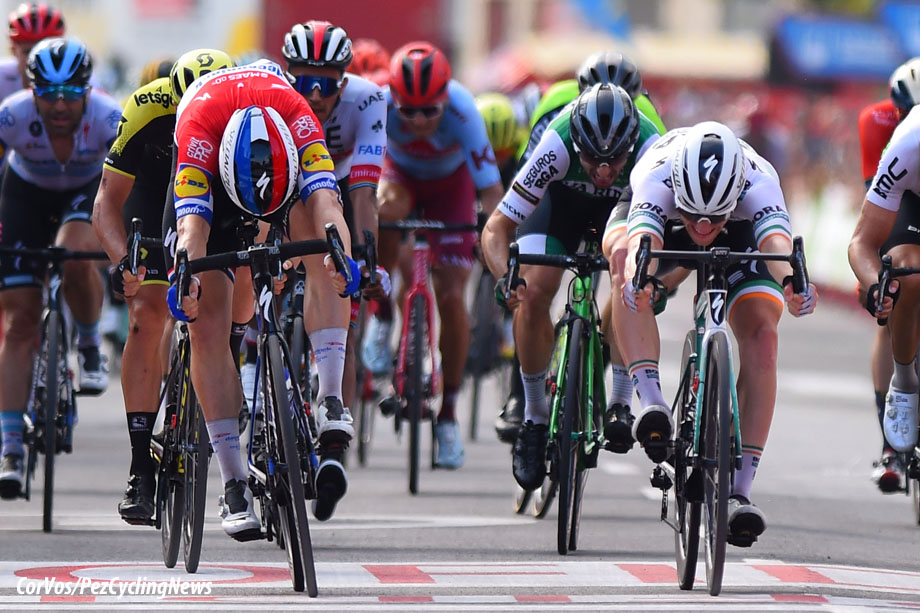 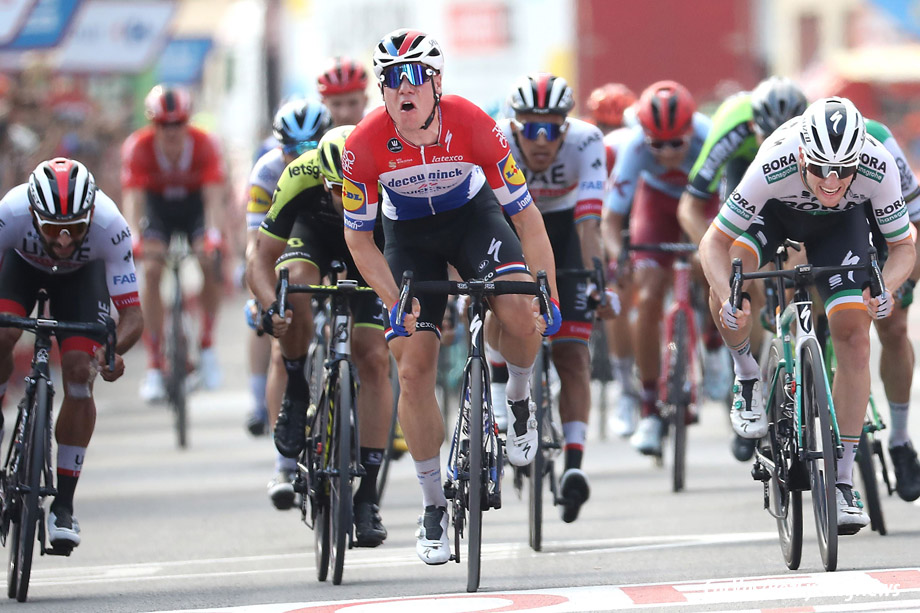 Stage winner, Fabio Jakobsen (Deceuninck – Quick-Step): “To win in a Grand Tour is one of the things you dream of as a sprinter. I came to the Vuelta as a 22yo to learn and to try and win. In my head I thought I could do it, but you never know for sure. To win a stage of La Vuelta wearing the colours of your country is amazing. Yesterday, maybe we were a bit too nice. This time, we took the initiative. Cavagna was very strong and even made a gap on the final. I stayed behind Stybar and Richeze. They are the best in the world at what they do, and they set me up in a perfect position for the final 200 meters. La Vuelta 20 starts from the Netherlands and I would love to win a stage there. My program for next year is not determined yet. Still, the three Grand Tours are some of the biggest sport events in the world. And to win a stage in my country would be very special.” 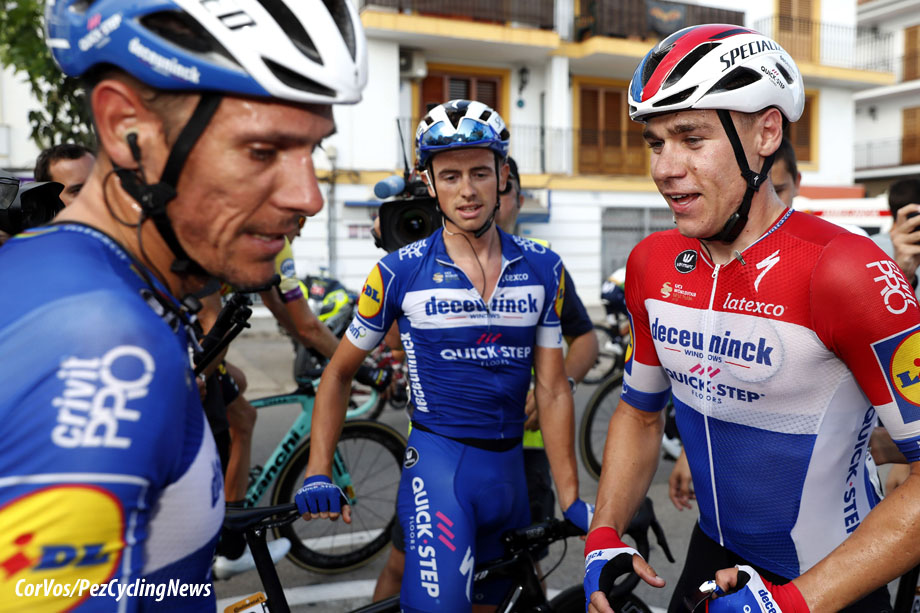 Another win for the ‘Wolfpack’