Race Report: Belgian Ben Hermans of Israel Cycling Academy powered away from an elite group of riders to win Stage 2 presented by Monster Hydro on Wednesday at the Larry H. Miller Tour of Utah. Hermans, who finished second overall in 2018, soloed to victory on the final epic climb to Powder Mountain Resort in a time of 3 hours and 37 minutes. The stage win put him in the Larry H. Miller Group of Companies Overall Leader’s jersey. 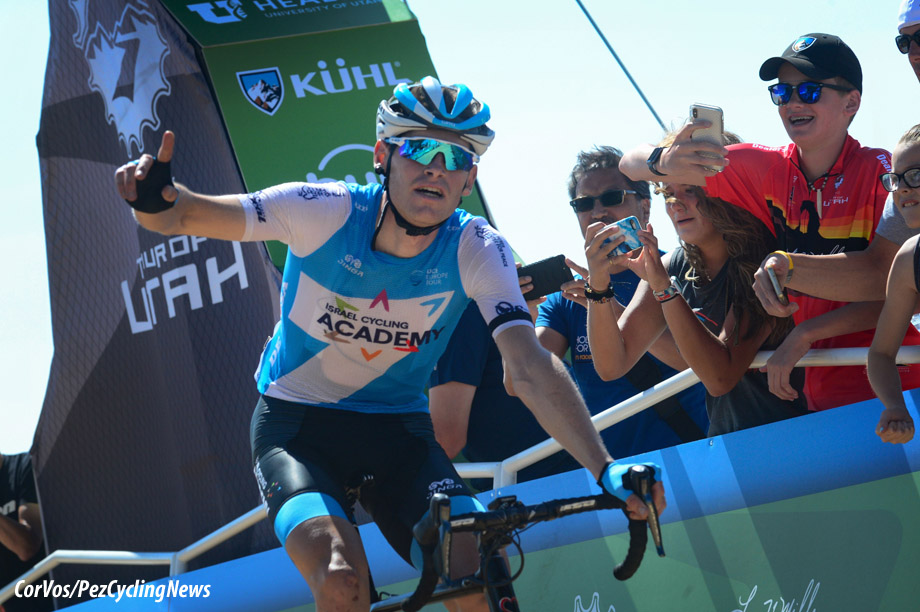 Hermans dropped James Piccoli (CAN) of Elevate-KHS Pro Cycling with four kilometers to go from the 8,900-foot summit after the pair had caught Peter Stetina (USA) of Trek-Segafredo. Piccoli, winner of the Prologue presented by Zions Bank, crossed the line 20 seconds behind Hermans. Trek-Segafredo’s Niklas Eg (DEN) finished third on the stage, 35 seconds down.

“Peter Stetina attacked quite hard and I knew that I had to set my tempo and look at the other guys. I kept my tempo until five or four K (kilometers) to go. From there, I knew that the chance was big that I could win the stage. It was still hard to get to the finish,” Hermans added.

Stetina attacked the dwindling peloton on the bottom slope of the steepest roads in Utah to take a 20-second lead on Eg, Piccoli, Hermans and 2015 Tour of Utah overall winner Joe Dombrowski (USA) of EF Education First. Hermans and Piccoli took up the chase to catch and drop the lone American off the front on a bid for glory. Stetina held on for fourth place.

“Today we had an extra bit of motivation,” said Piccoli who was awarded the Larry H. Miller Dealerships Most Aggressive Rider jersey. “I always want to do the best I can here. I think there is lots to play for, and the team is going to do everything we can to continue fighting and to race strong.”

The third day of racing at the Tour of Utah included 7,316 feet of climbing and shook up the overall standings. Hermans surged from 10th place to first place with a 26-second lead on Piccoli. Eg moved to third place, 52 seconds down with his teammate Stetina in fourth place. Dombrowski, who finished fifth on the stage, is now in fifth place overall. Rally Cycling’s Kyle Murphy (USA) dropped two spots to sixth place, while his teammate Rob Britton (CAN) moved up four spots to eighth place. João Almeida (POR) is now seventh overall and remains in the WCF Insurance Best Young Rider jersey.

Eg identified Stage 5 and Stage 6 as upcoming opportunities for his team. “I think tomorrow is also going to be a really hard day. I think it will be hard racing throughout the week every day.”

Lawson Craddock (USA) of EF Education First, who wore the leader’s jersey after Stage 1, dropped to ninth on G.C., 2 minutes and 56 seconds off the lead. Serghei Tvetcov (ROM) of Worthy Pro Cycling dropped from second place to 23rd overall.

The 84.4-mile (135.8-kilometer) stage began in Brigham City. After 25 miles of dynamic racing, including the first intermediate sprint in Brigham City, the six-rider breakaway was established. The escapees gained over three minutes on the peloton before the final riders were re-absorbed at the bottom of the brutal 8.6-mile climb with gradients rising to16 percent to the summit of Powder Mountain.

Stage 3 presented by BYUtv on Thursday, Aug. 15 begins for a fourth time at Antelope Island State Park. Most of the 5,895 feet of climbing on this 85.9-mile (138.3-kilometer) stage will be collected when the route skirts the Wasatch Mountains south of Layton, with three Category 3 climbs in the final 29 miles. Following a punchy KOM up the Bountiful Bench, the route follows a new southbound stretch of Bountiful Boulevard for finishing circuits in first-time host city North Salt Lake.