Race Report: Using the final kilometer as a launch pad, Ben Hermans of Israel Cycling Academy accelerated away from his main competitors for a masterful solo victory on Stage 3 presented by BYUtv Thursday at the Larry H. Miller Tour of Utah. The Belgian claimed his second stage victory in two days in a time of 3 hours and 20 seconds, and increased his overall lead in the seven-day event, known as “America’s Toughest Stage Race.”

Biding his time on the tough 85.9-mile (138.3 kilometer) course, Hermans used the steep incline on the third and final finishing circuit in North Salt Lake to launch his attack. He quickly caught and passed the final two riders up the road, Kyle Murphy (USA) of Rally UHC Cycling and Lawson Craddock (USA) of EF Education First, to continue alone to the finish line. 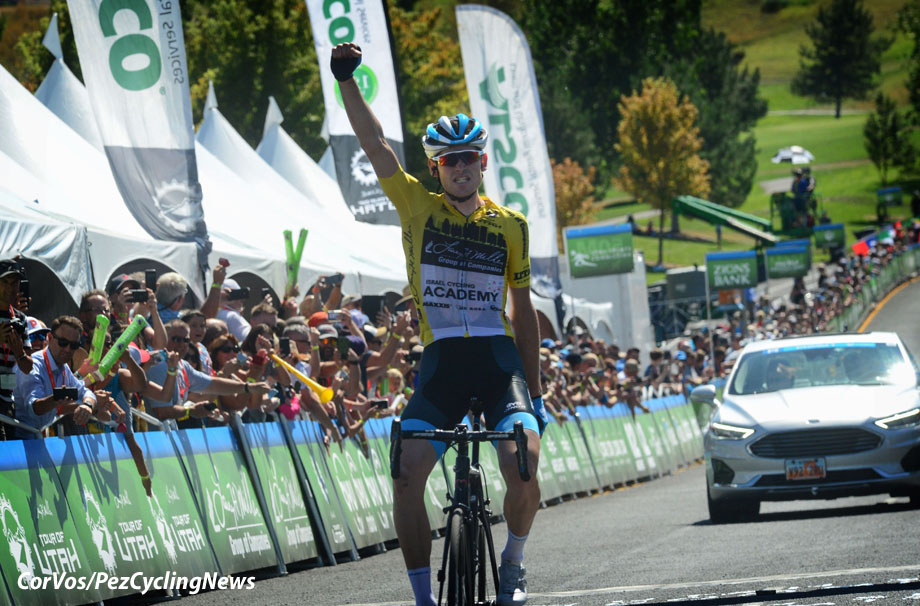 Murphy held on for second place, crossing the line seven seconds back. Niklas Eg (DEN) of Trek-Segafredo was third, eight seconds behind Hermans.

“I wanted to win so bad, but Hermans is just a machine. I’m happy,” said Murphy, who was awarded the Larry H. Miller Dealerships Most Aggressive Rider jersey for his efforts.

The fourth day of racing provided bright sunshine with unrelenting high temperatures and 5,895 feet of elevation gain. Stage 3 presented by BYUtv started at Antelope Island State Park, which sits on the largest island in the Great Salt Lake. Fast and furious racing marked the first half of the race until finally a break of six riders was able to escape the 102-rider field. The final riders were reeled in with five kilometers to go on the stage.

Craddock made the first decisive attack from the shattered peloton, bringing Murphy with him. The pair continued ahead to catch and pass the remaining riders from the original breakaway. It was Hermans who launched the final attack to drop his closest challenger in the General Classification, James Piccoli (CAN) of Elevate-KHS Pro Cycling, then catch and pass Craddock and Murphy for the win.

Hermans increased his lead in the General Classification (G.C.) to 44 seconds over Piccoli, and 1 minute and 6 seconds on Eg. Murphy moved up two spots to fourth overall, 1 minute and 46 seconds down. Finishing 10th on the stage, João Almeida (POR) of Hagens Berman Axeon, remained in seventh overall, and retained the WCF Insurance Best Young Rider jersey.

“It’s not in the pocket, there are three stages to go. You can always have bad luck or a bad moment,” Hermans stated. “For the moment, it looks really good. I never underestimate my contenders. I will still have to look at Piccoli.”

Alex Howes (USA) of EF Education First was part of the break and took top points in all three KOM of the day to claim the Utah Office of Tourism King of the Mountain jersey.

“It was pretty flat the first part of the stage. It was super fast. We were coming off the island just ripping along. You could tell that a lot of people wanted to be in the breakaway,” said Howes, who was wearing the Stars-and-Stripes jersey for the first time this summer as U.S. Pro Road Race National Champion. “Our team in particular, we wanted to put a little bit of pressure on Israel Cycling Academy and make sure that Ben was really up to snuff to hold the jersey, and he certainly seems to be.”

Stage 4 presented by America First Credit Union returns to downtown Salt Lake City for the 12th time in Tour history on Friday. The traditional circuit course is back for a third time with the start/finish line on East Capitol Boulevard next to the Utah State Capitol. The peloton will make eight circuits on Friday, beginning at 5:55 p.m. MT.