Stage Report: Cross-wind chaos! The damage to the overall placings today was not caused by mountains or crashes, but the invisible enemy – The wind. The race split with Jumbo-Visma’s Wout Van Aert in the front group and cross champ took some big scalps in the sprint. Losers on the day: Pinot, Landa and Bennett. 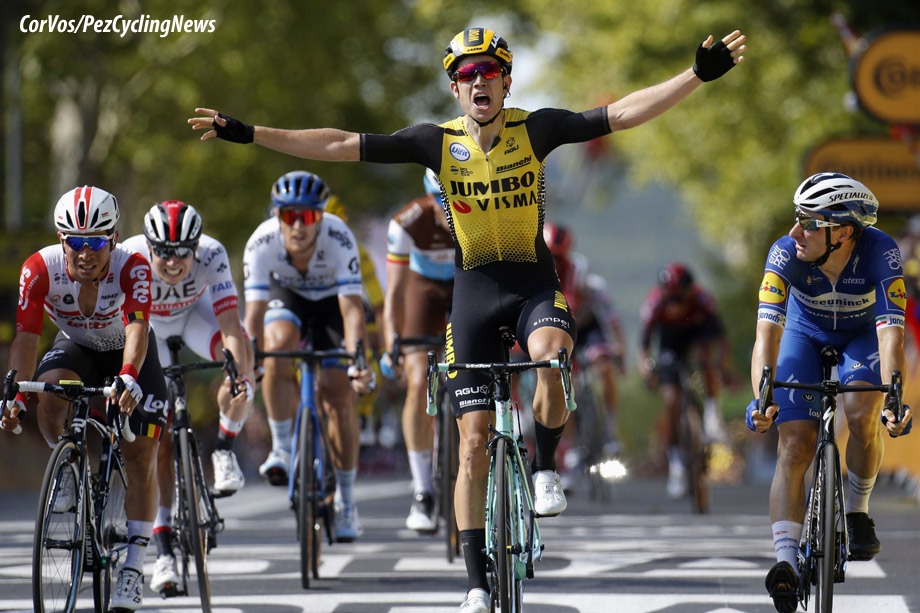 Wout Van Aert – What must Viviani and Ewan be thinking? 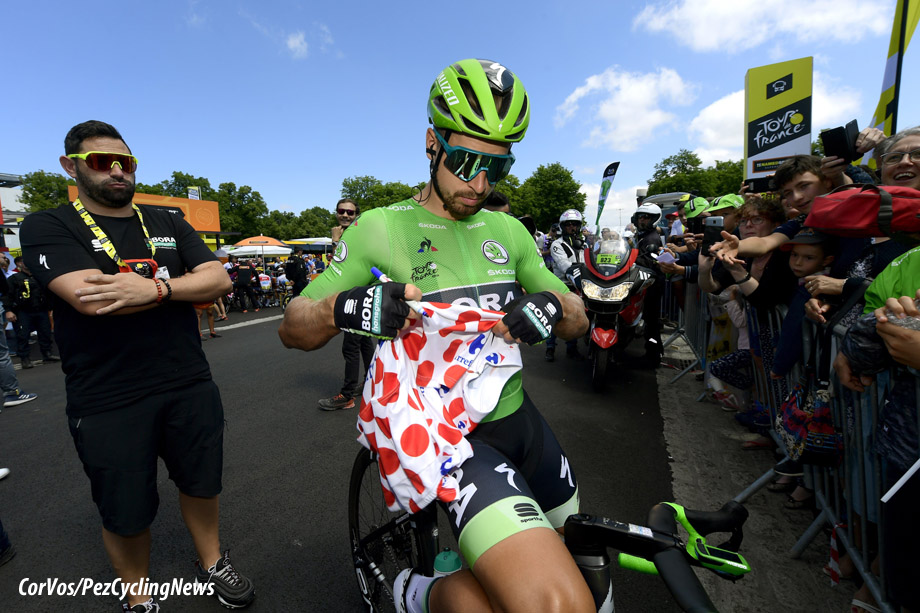 Maybe Peter Sagan also has his eyes on the KOM jersey

Stage 10 Route:
Another tough day, no big climbs, but no flat road on the 217,5 kilometres between Saint-Flour and Albi. Four climbs; one Cat. 4 and three Cat. 3. The last climb, Côte de La Malric (3,6km at 4,7%), comes 53 kilometres before the finish so it shouldn’t make any difference to the result. If the race comes back together it could be another day for Peter Sagan or any sprinter that can hang on. Albi is the home town of Lilian Calmejane of Total Direct Energie, also the birthplace of Toulouse-Lautrec, who painted many advertising posters for cycling firms. 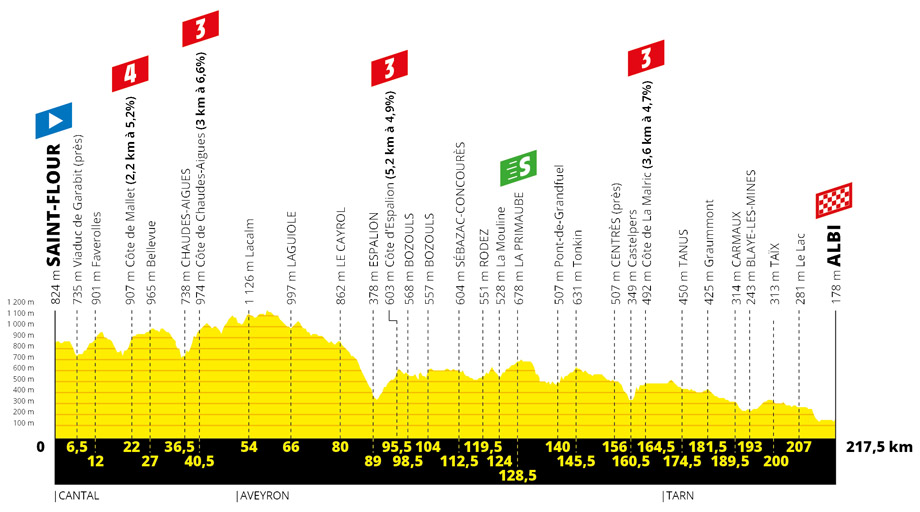 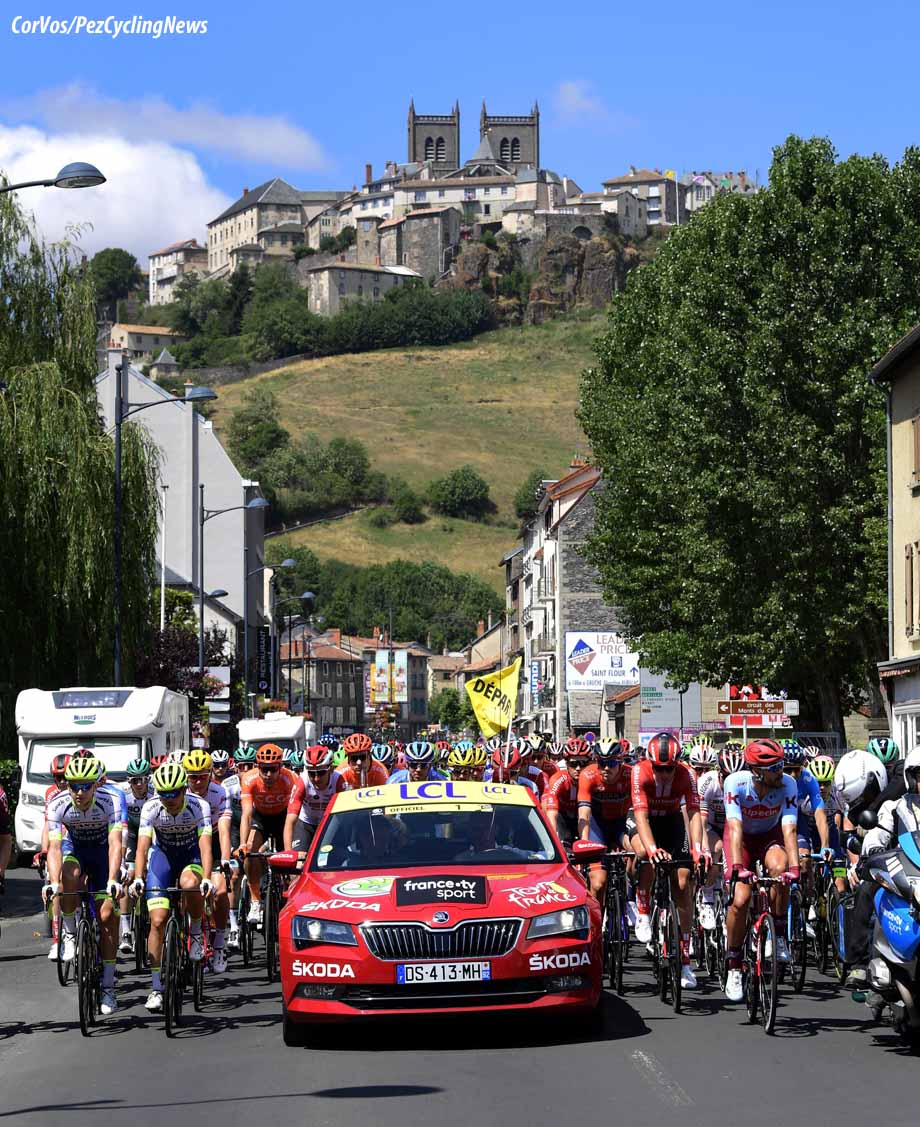 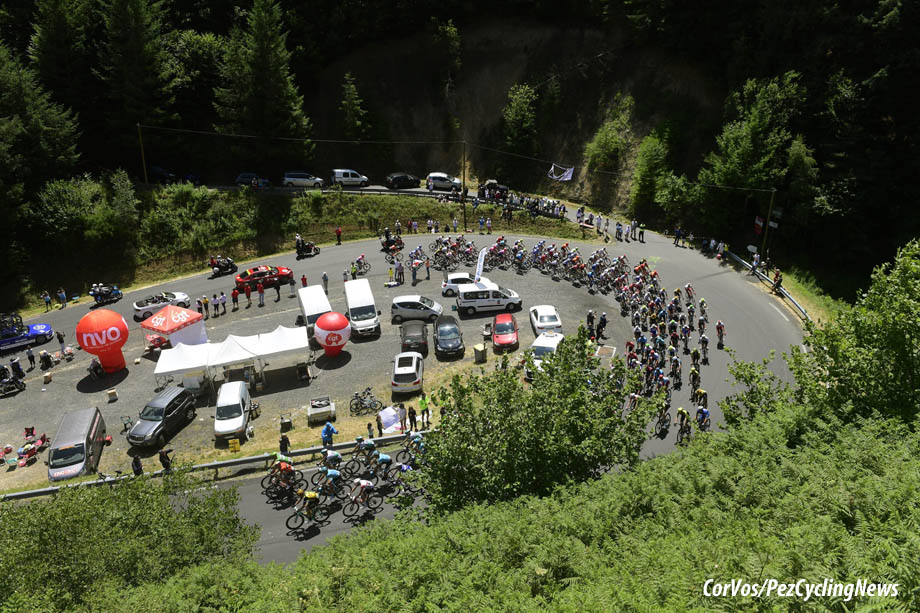 The climbs come early on stage 10 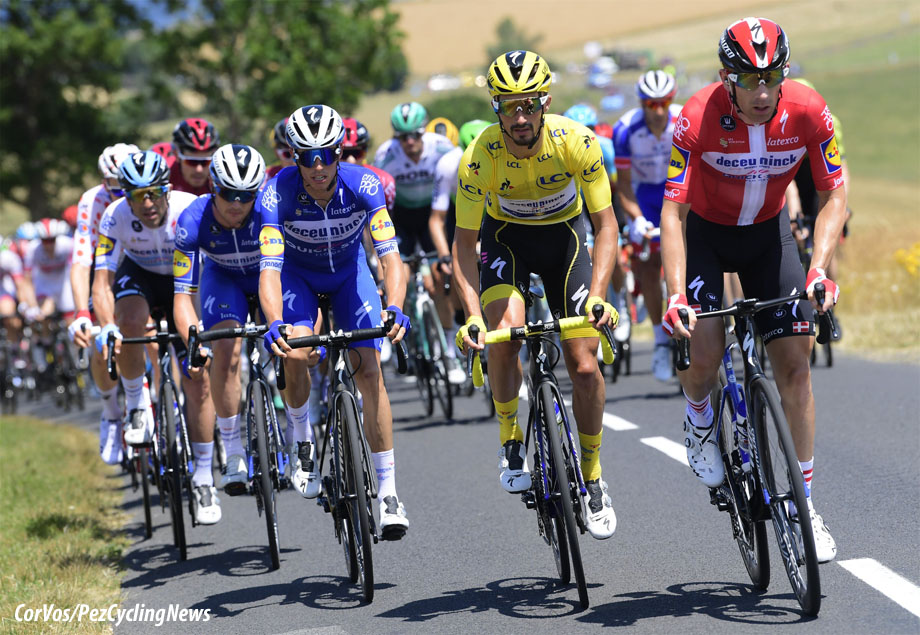 Mørkøv was hard at work as usual 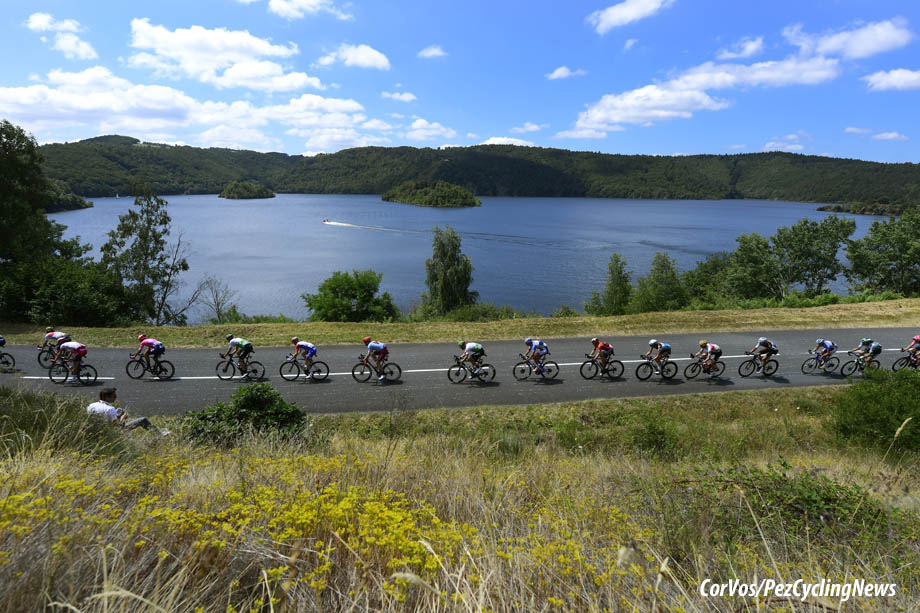 A quiet time in the peloton

Those attacks were countered, especially those from Sunweb. Michael Schär was given space, which allowed the CCC rider to make the cross to the leading group. The six up front didn’t get much advantage. Lotto Soudal, Jumbo-Visma and Deceuninck – Quick-Step kept the lead around 3 minutes. 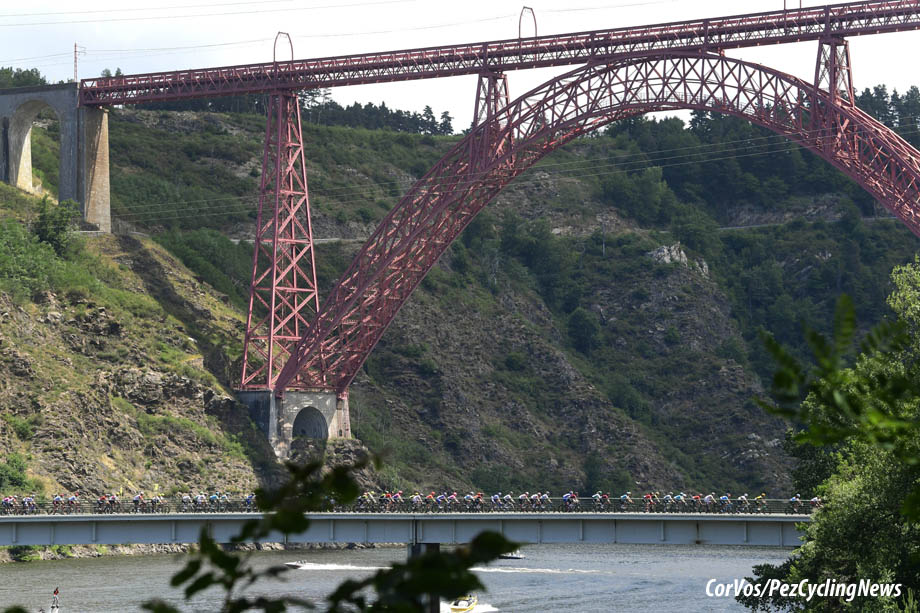 Just after the intermediate sprint the peloton started to look like they wanted to race. The lead of the break was cut in half as the strong wind was coming from the back and across the race. With 65 kilometres to go, it became really serious when Ineos put the pressure on to put the peloton into a long line, Jumbo-Visma was also near the in front. 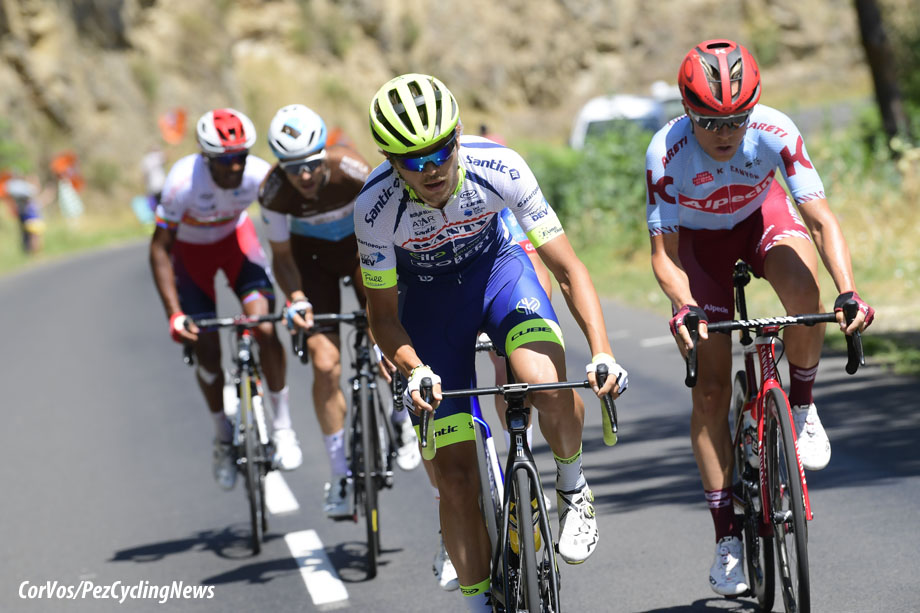 A split at the back of the peloton, shortly before a third Cat. 3 climb. This slowed the pace and the lead of the escape again grew to 2 minutes. Moments later, EF Education First tried a surprise move using the wind. This caused the peloton to split again. 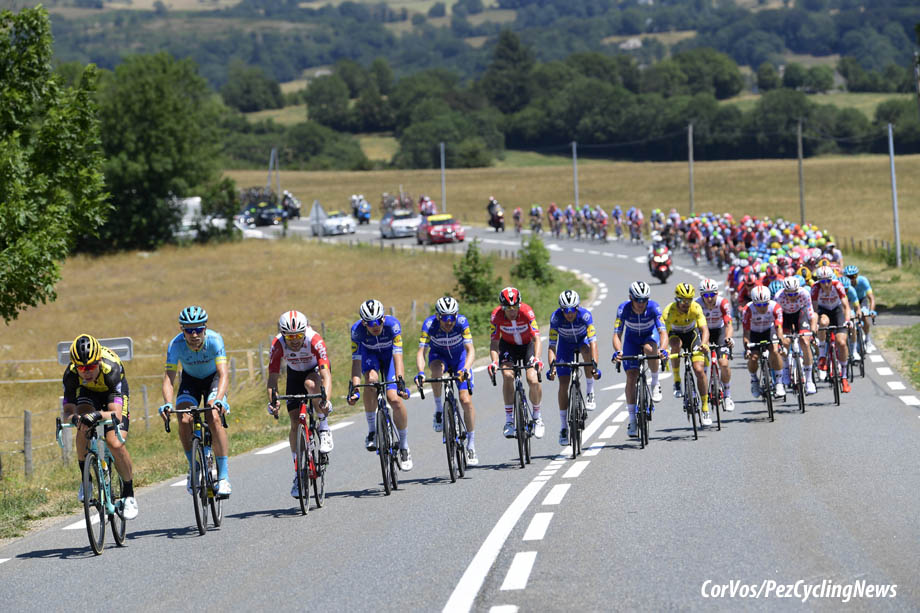 The peloton was pulled into one long line by Tony Martin

Deceuninck – Quick-Step and Ineos were the next teams to give it a go. With 35 kilometres to the finish, it was the yellow jersey of Julian Alaphilippe who made the pace, further thinning the peloton. Giulio Ciccone (2nd overall), Thibaut Pinot (3rd), Rigoberto Urán (8th), Jakob Fuglsang (9th), Richie Porte (18th) and Bauke Mollema (19th) were surprised and had to chase. George Bennett (4th) was in a third group after he had dropped back to get water bottles. 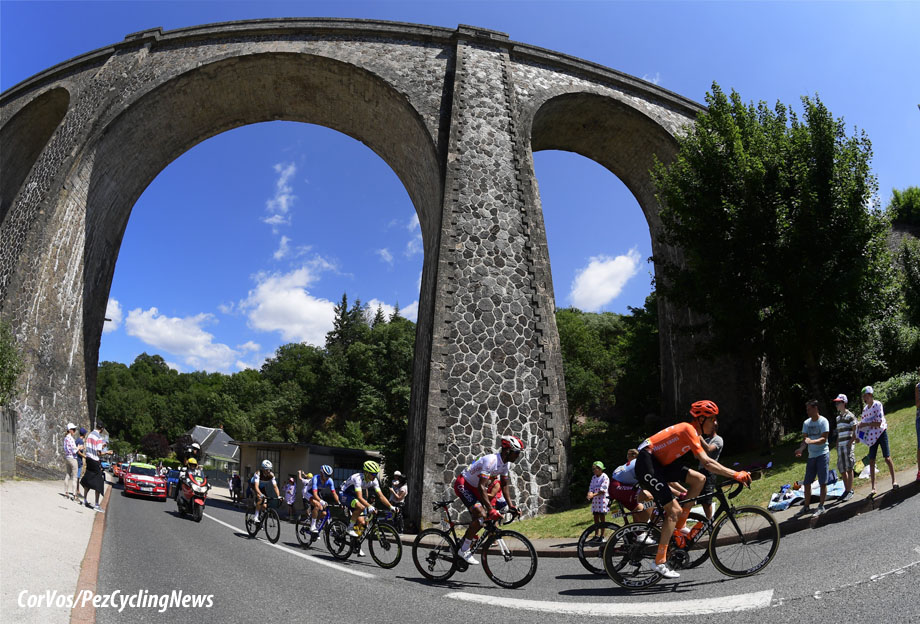 Pinot loses time, Bennett…. All hope
The break of the day was caught due to the action in the peloton. The gap to the Pinot group was just half a minute with 20 kilometres to the line. The Pinot group lost more and more ground as Albi approached. Ciccone and Groenewegen, among others, had already been dropped. The Bennett group lost more than 2 minutes. There was bad news for Mikel Landa as the Movistar leader was initially in the front group, but at a crucial moment he lost his position and had to chase. 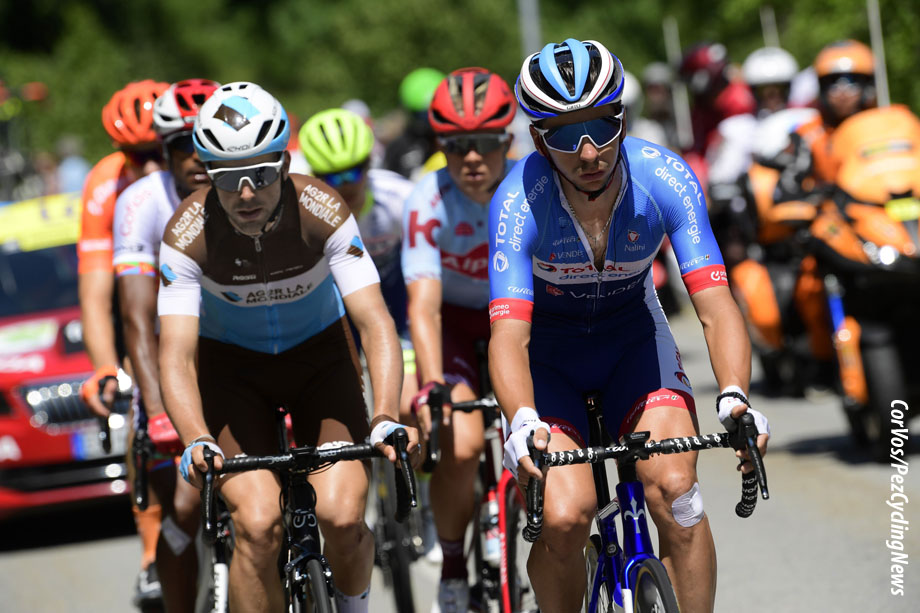 Ineos, Deceuninck – Quick-Step and Bora-Hansgrohe kept the pace high in the front group. As well as the classification riders, a number of fast-finishers were also present, such as Peter Sagan, Caleb Ewan, Elia Viviani, Michael Matthews, Wout van Aert and Jasper Philipsen. 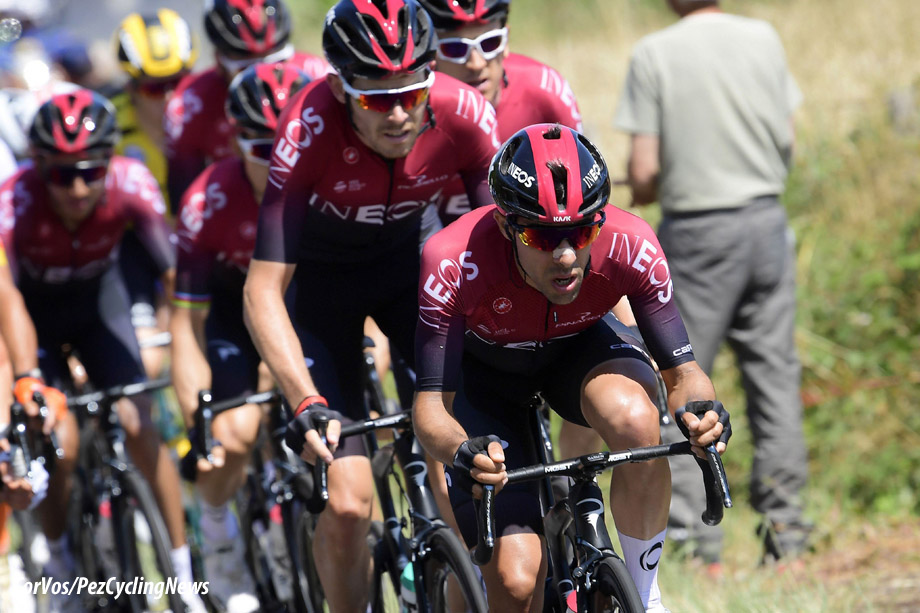 Ineos (amongst others) saw an opportunity and put the hammer down 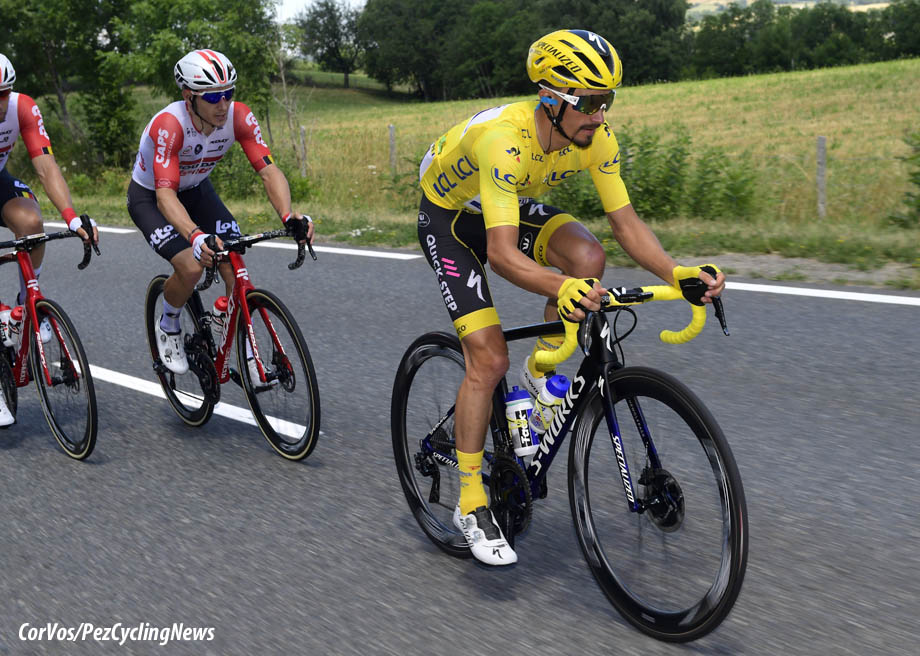 Alaphilippe was happy to help the split

With a lot of riders in the front group; Sunweb hit the front to lead-out Matthews. This worked at first, but on the slight rise, Van Aert went early in the sprint and managed to surprise the rest and hold off Viviani by a tyre width on the line. Viviani was second, Ewan third, Matthews fourth, Sagan fifth. 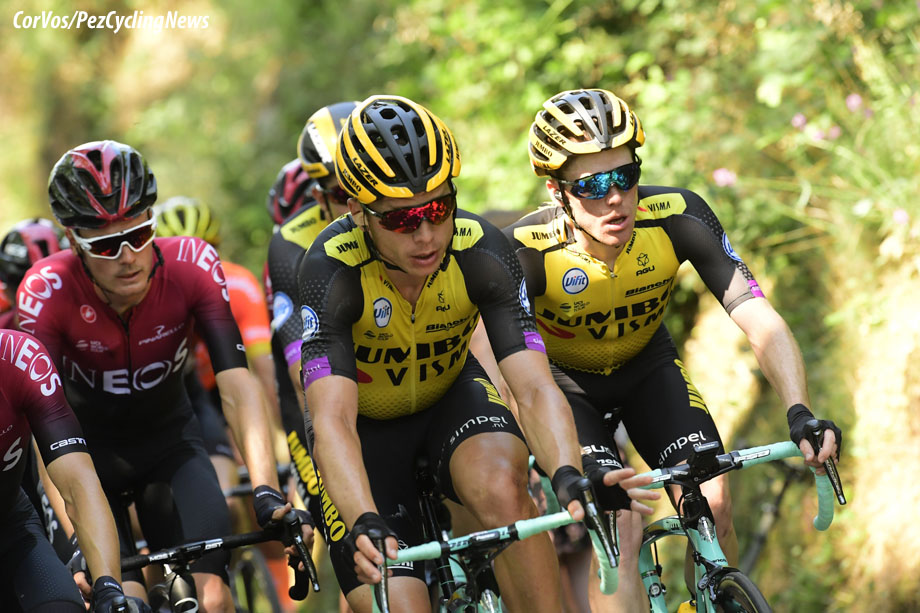 Jumbo-Visma and Ineos well to the fore 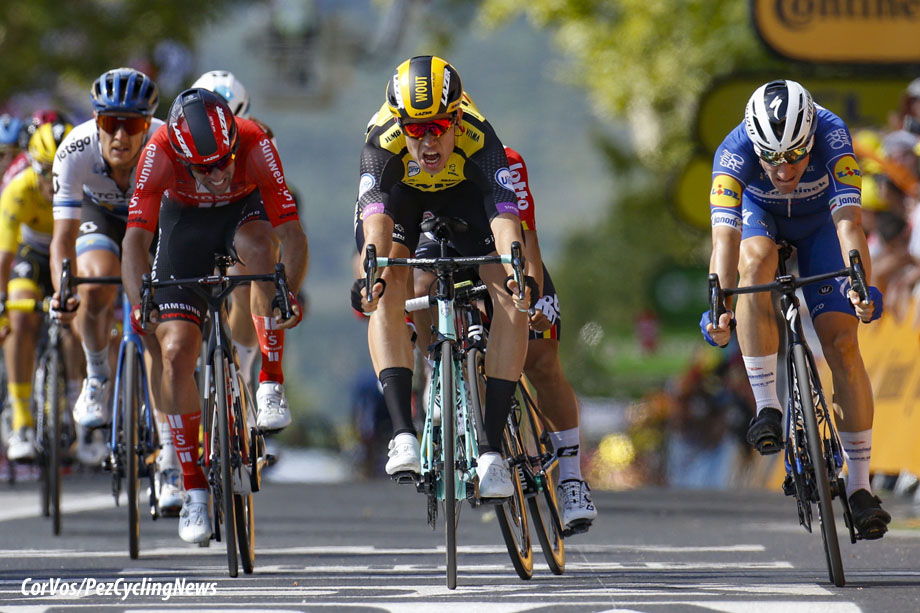 And a crossman wins a stage of the Tour de France

Behind the front group; Pinot and Co. crossed the line with Fuglsang, Urán and Porte at 1:39. The group with Landa and Ciccone followed at 2:08. Behind that Bennett lost more than 5 minutes. Due to all the shifts, Geraint Thomas and Egan Bernal are second and third on the overall with Steven Kruijswijk in fourth. 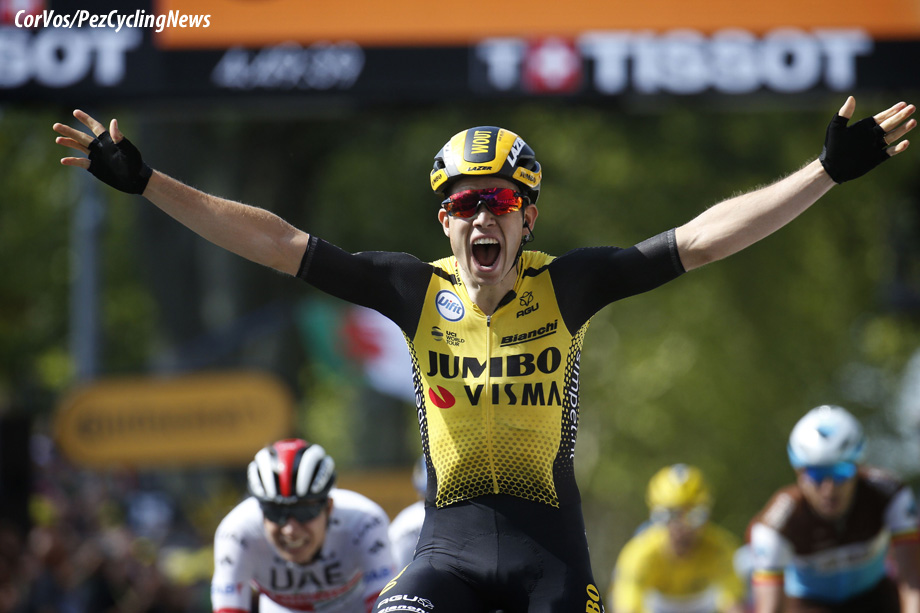 The big win on the road for Wout Van Aert

Stage winner, Wout Van Aert (Jumbo-Visma): “I’m sorry, I can’t believe that I’ve won a stage of the Tour de France. It’s above anything else. I’ve discovered this race in the last ten days. Winning at my first attempt is incredible. It became quite nervous in the finale. Luckily we stayed at the front with Steven Kruijswijk and Dylan Groenewegen. I went 250 meters from the finish. It was close with Viviani at the end, but 1cm is enough as long as I won it.” 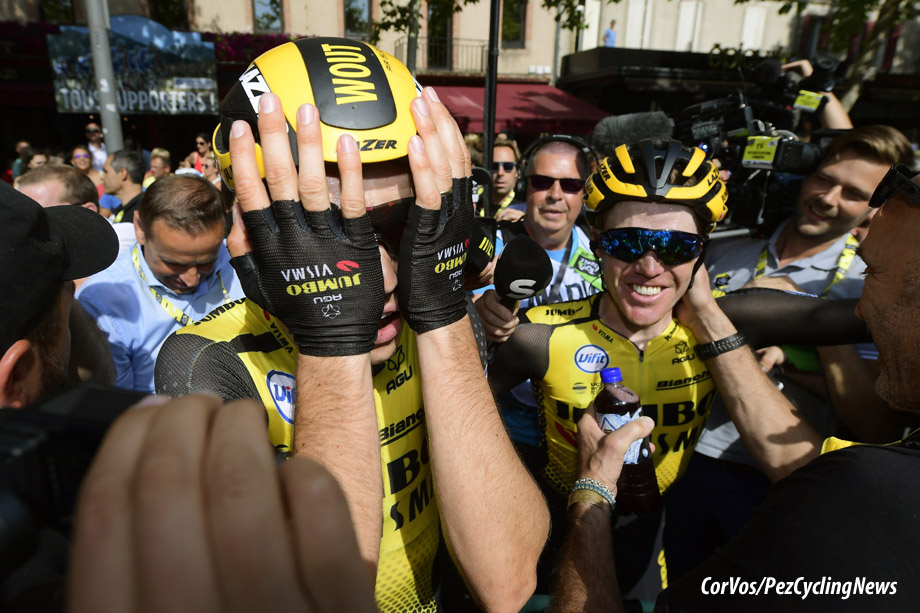