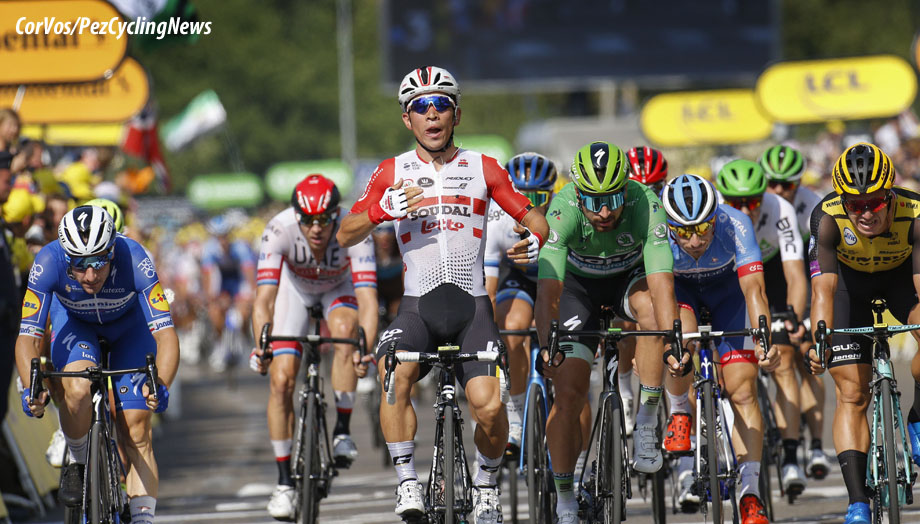 The Tour started the final week with a relatively flat stage in and around Nîmes, with the only obstacle being the Côte de Saint-Jean-du-Pin. Dylan Groenewegen, Caleb Ewan and Elia Viviani would again be there for the stage victory. 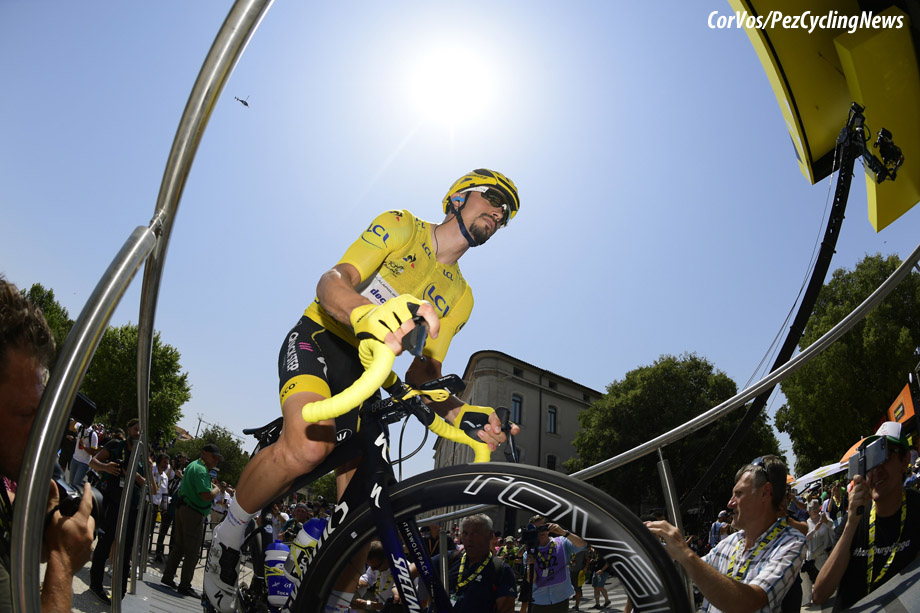 Can Julian Alaphilippe hold on to the yellow jersey? Today, yes

Stage 16 Route:
177 kilometres out and back from Nîmes with just one Cat. 4 climb, the Côte de Saint Jean du Pin (1.8km at 4.2%), after 96 kilometres. Should be one for the sprinters, but in this Tour you never know. Groenewegen, Ewan, Viviani or maybe one for the green jersey, Peter Sagan? 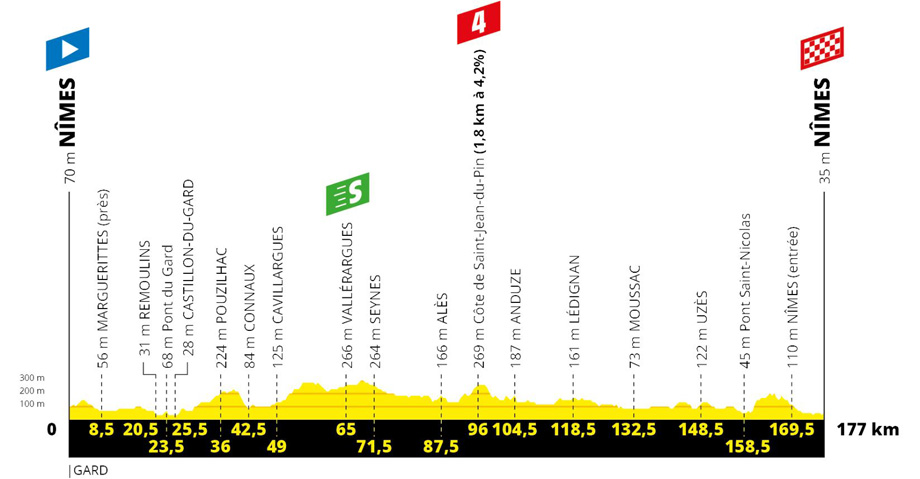 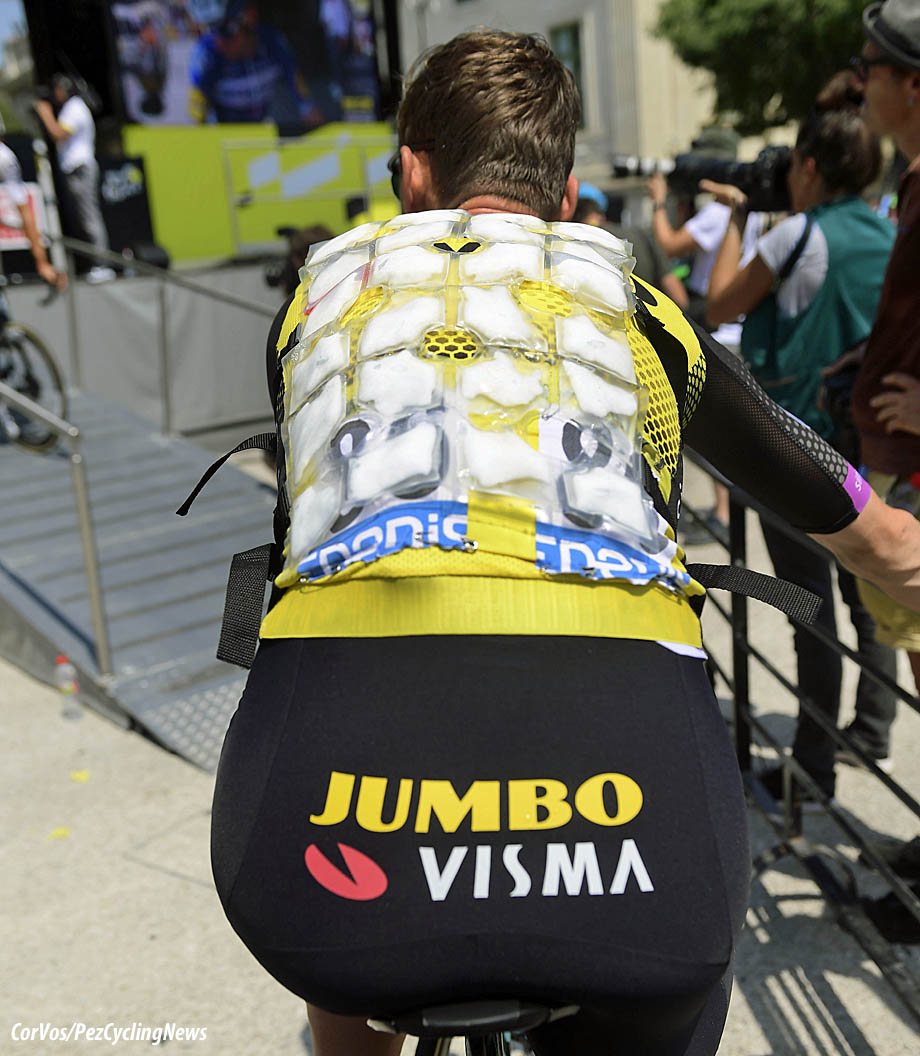 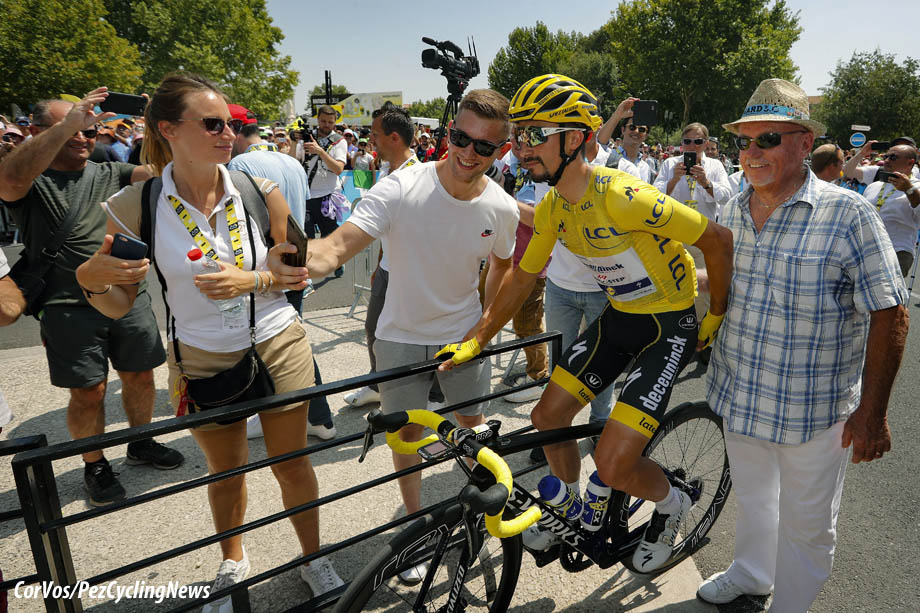 Alaphilippe still has time for the fans

Łukasz Wiśniowski, Lars Bak, Paul Ourselin, Alexis Gougeard and Stéphane Rossetto took only 6 kilometres before they rode away from the peloton. The ‘break of the day’ got a maximum lead of just 2 minutes, as Jumbo-Visma and Lotto Soudal wanted the sprint finish with Groenewegen and Ewan. So it was a very controlled stage, in which very little happened. 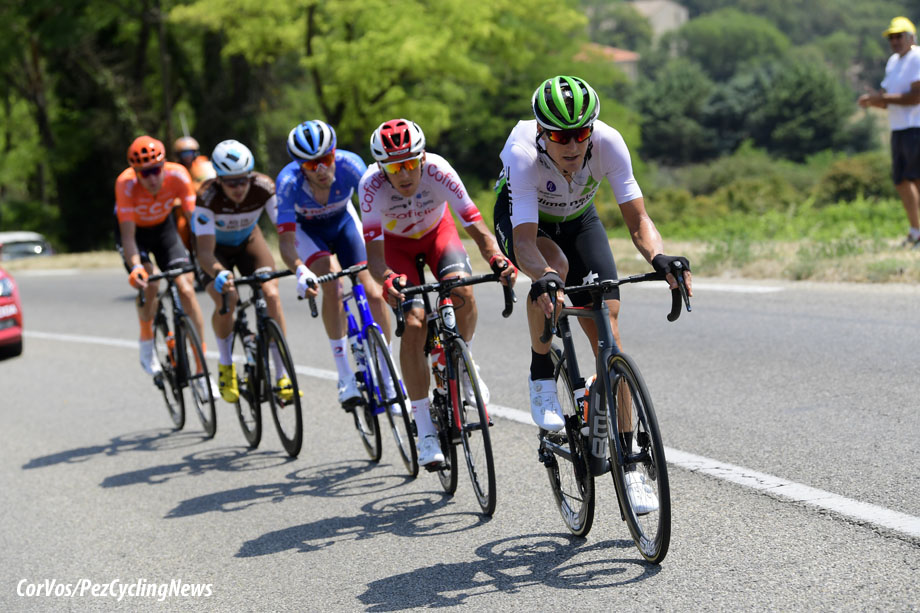 Thomas crash
125 kilometres from the finish in Nîmes, 2018 tour winner, Geraint Thomas crashed on a sweeping left hand bend. He was delayed for a little time and had a cut to his knee. The Welshman quickly rejoined the peloton as the pace was not that high. The pace did accelerate in the town of Vallérargues for the intermediate sprint. 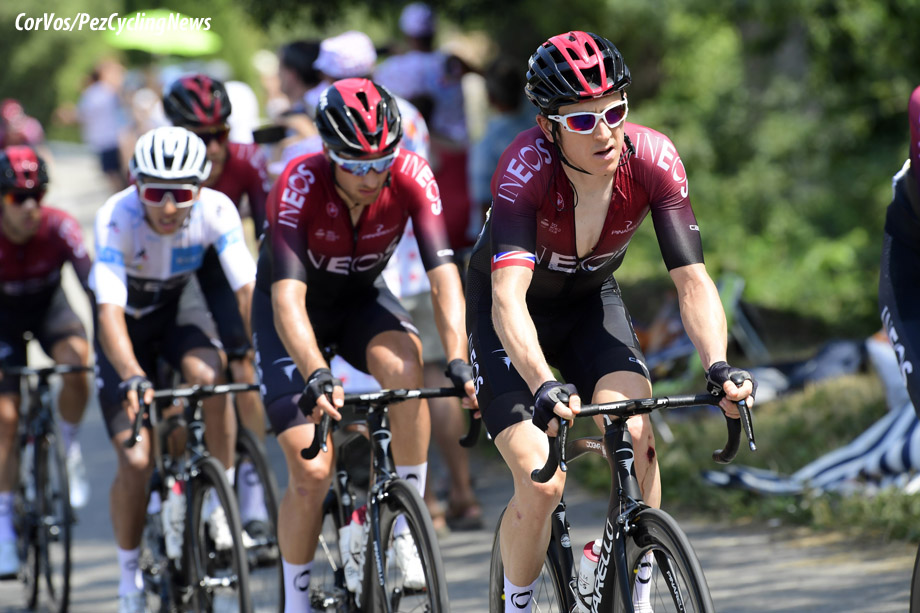 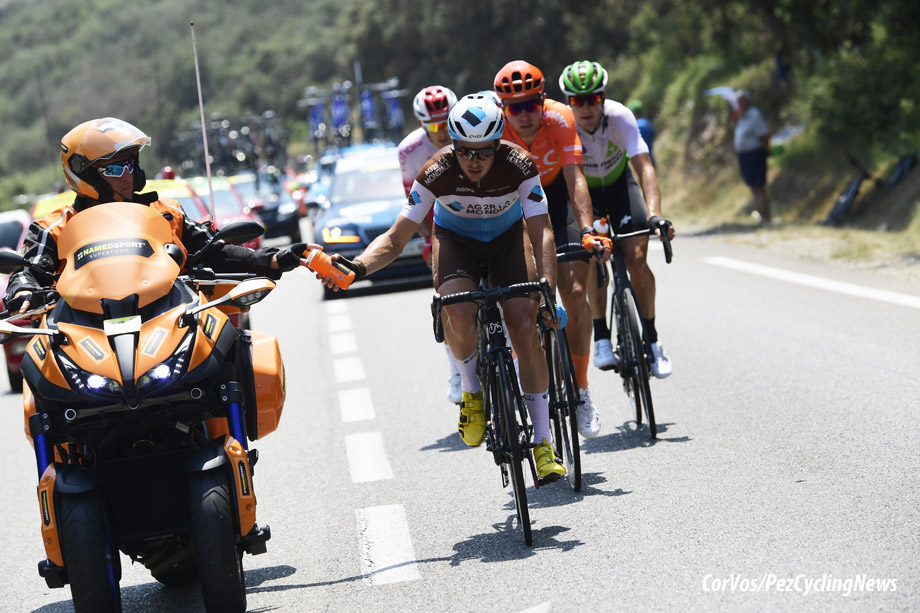 There will be a lot of bottles handed out to day

With just over 50 kilometres to go, the pace suddenly went up, as the wind started to blow a little harder. The GC riders did not want any surprises from echelons, so there was a fight for a good position. As a result, the lead of the five escapees became smaller and smaller. Bak, Gougeard, Rossetto, Wiśniowski and Ourselin were still one minute ahead of a nervous peloton. 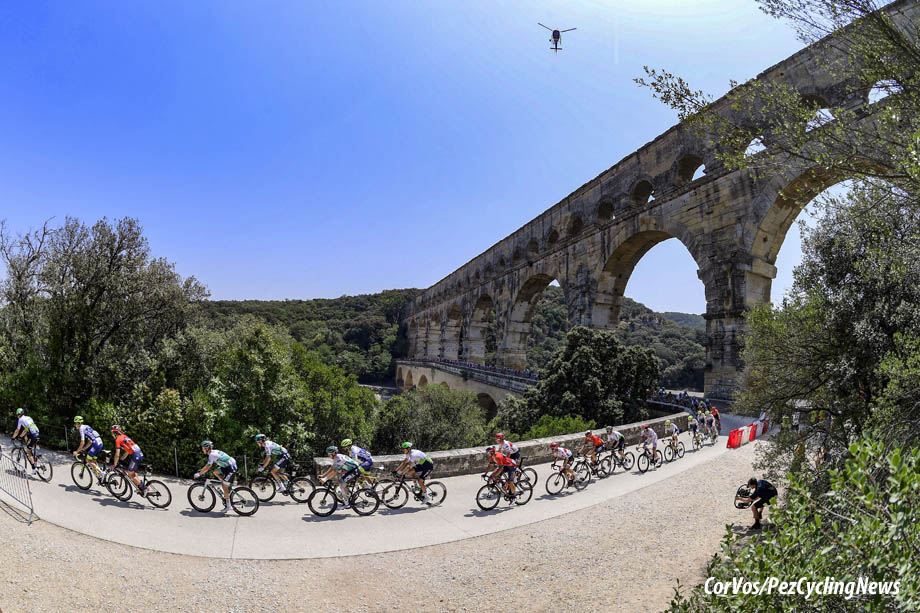 “What did the Romans ever do for us?” 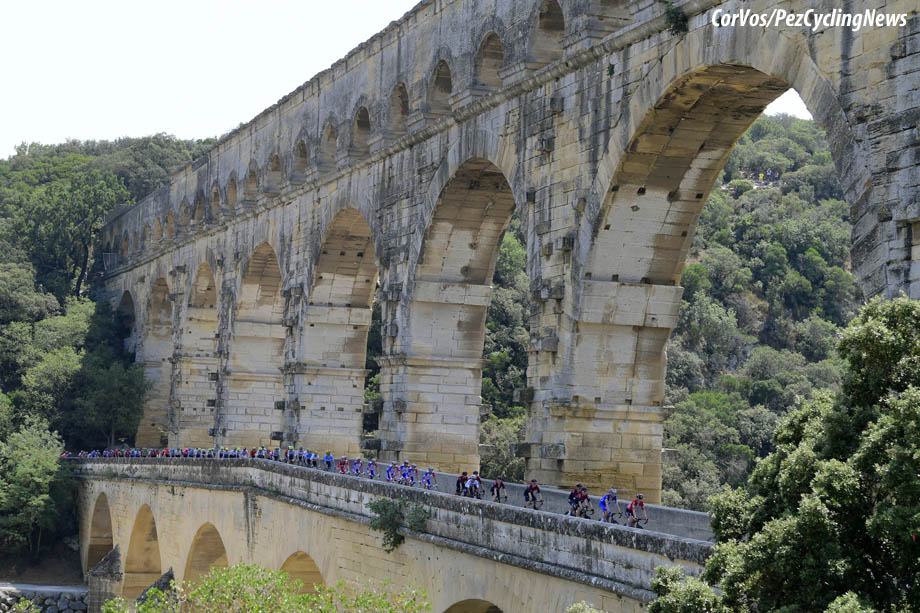 The peloton passes the Pont du Gard near Nîmes

Fuglsang out of the Tour
The wind was not strong enough to break the peloton into echelons, but there was a crash in the peloton and the biggest victim was Astana’s Jakob Fuglsang. The leader of the Astana team started as one of the top favourites in this Tour, but luck has not been with him this year: Exit Fuglsang. 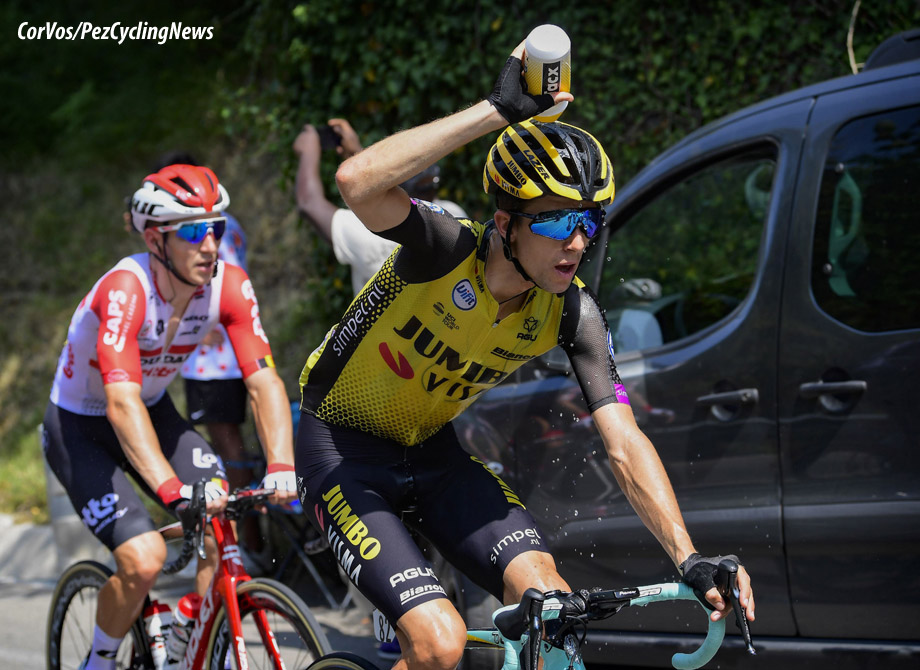 Hot day for everyone – George Bennett (Jumbo-Visma) takes a shower

Cees Bol was also involved in the crash, but the Sunweb sprinter managed to regain its place in the peloton, where the pace was increased by the men of Bora-Hansgrohe for Peter Sagan and Katusha-Alpecin for Jens Debusschere. Because of this, the five front runners were caught in good time, as the sprint started in the streets of Nîmes. Groenewegen, Ewan, Viviani… All the top sprinters were present. 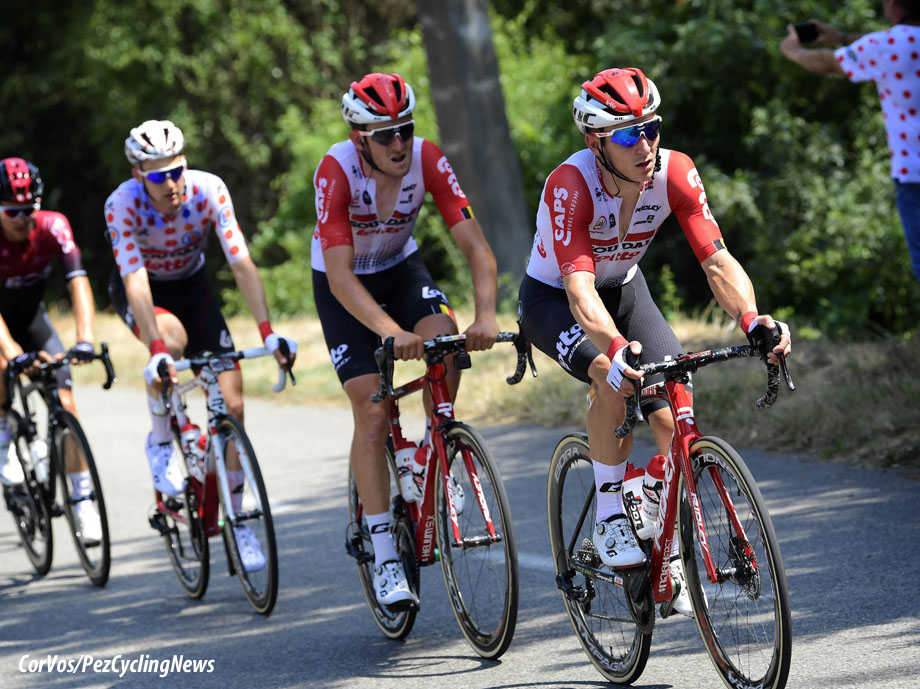 Not much for KOM, Tim Wellens to do today, but the Lotto Soudal team would need to work for Caleb Ewan later

Ewan takes his second
It was a fairly chaotic sprint, with no team managing to control the rush to the line. Lotto Soudal tried to pilot Ewan for the win, but Deceuninck – Quick-Step took over with 500 metres to go. Michael Mørkøv and Maximiliano Richeze hit the front for Viviani, but it was Ewan who proved to have the fastest legs. 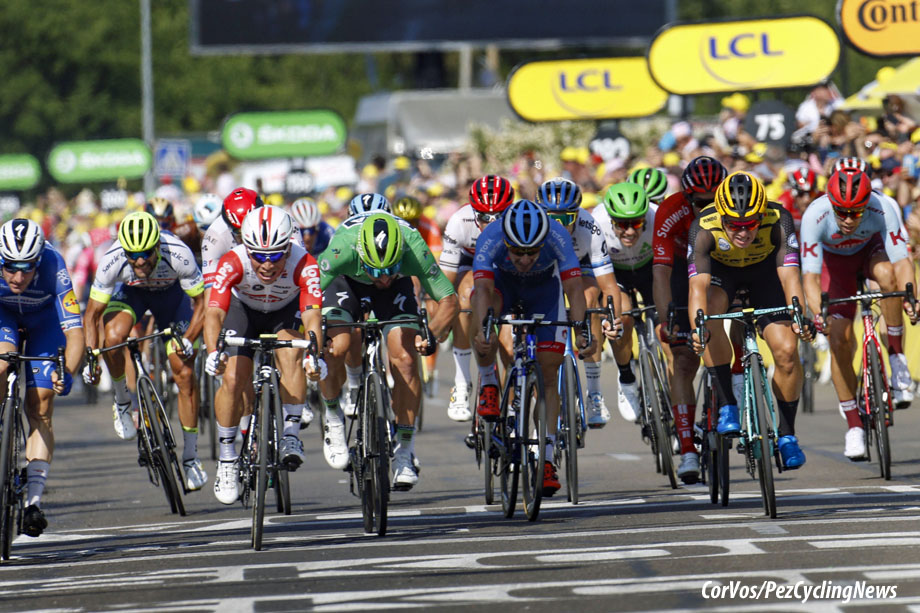 A bit of sprint chaos

This was the 25-year-old riders second victory in this Tour, after being the fastest in Toulouse. Viviani had again to settle for second place, with Groenewegen in third. Little changes in the overall, although Richie Porte ‘benefits’ from the loss of Fuglsang. 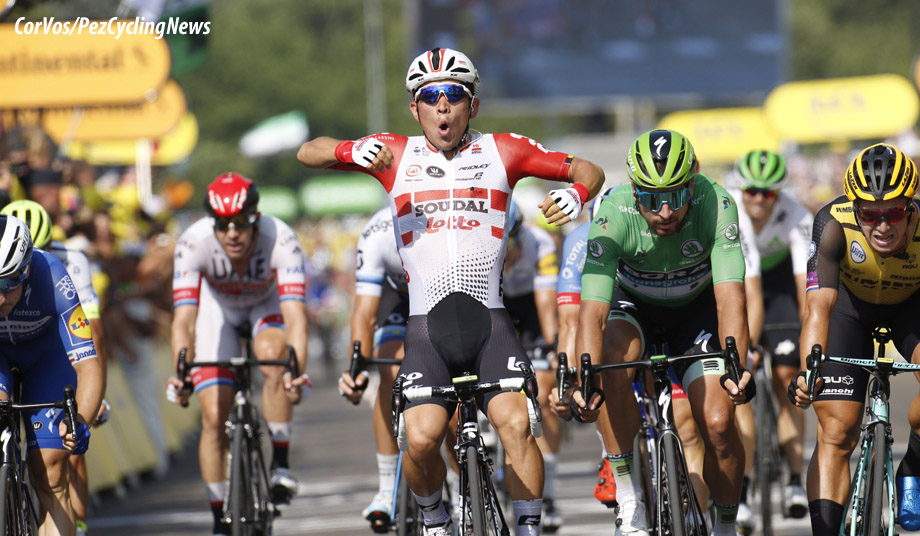 Tour stage No.2 for Ewan

Stage winner, Caleb Ewan (Lotto Soudal): “To be honest, I felt so bad today. The heat really hit me but I had some extra motivation with the presence of my wife and my daughter. I was not in the ideal position with 1km to go but I followed Quick Step pretty well and came from behind. I don’t realise what’s happening to me. It’s a dream to be here at the Tour de France. It was already such a big dream to win one stage, now I won two but I can’t believe it.”