Stage Report: European champion, Matteo Trentin (Mitchelton-Scott) soloed into Gap for the win on Tour de France stage 17. The Italian was part of the big early break, which took over 15 minutes on the peloton. Just over ten kilometres from the finish, he rode away from the group for the solo to win. Yellow jersey, Julian Alaphilippe (Deceuninck – Quick-Step) was safe in the peloton so there was no change on the overall. 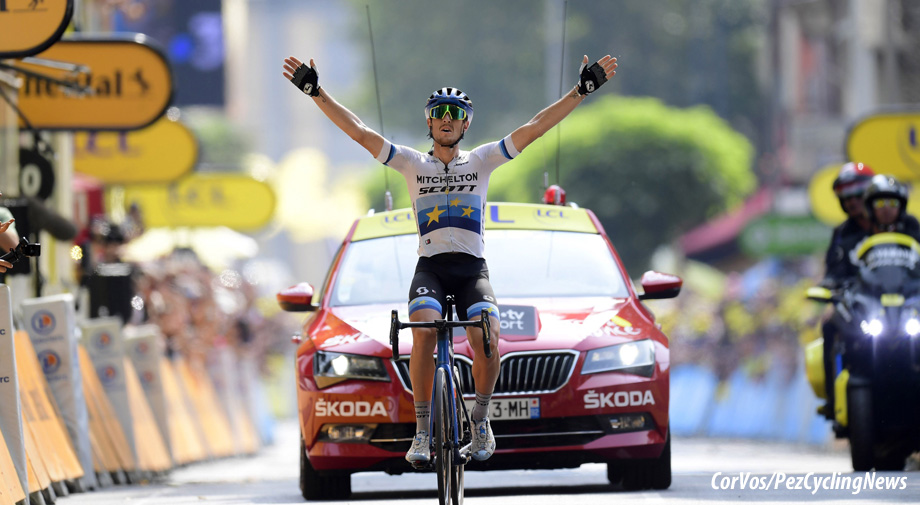 The riders lined up next to the highest Roman aqueduct in the world, the Pont du Gard, for the 200-kilometre stage to Gap. A big break was expected and the riders did not disappoint. 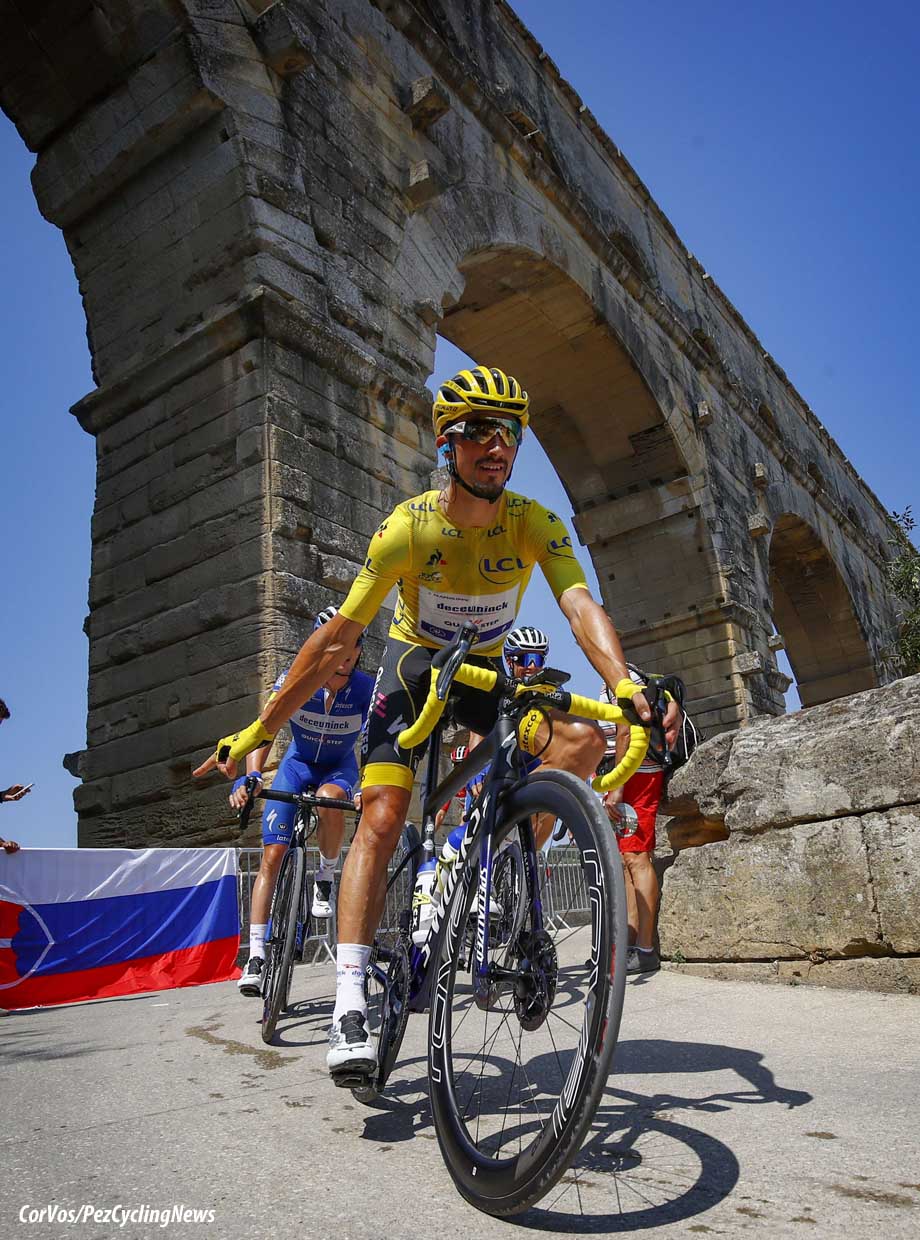 Another day in yellow for Julian Alaphilippe

Stage 17 Route:
200 up hill kilometres all the way to the last climb then a 8 kilometre descent to the finish in Gap. Two classified climbs: The Cat.4 Côte de La Rochette du Buis (2.3km at 6.2%) comes after 104.5 kilometres and, more importantly, the Cat.3 Col de la Sentinelle summits 8.5 kilometres from the finish. There will be a break, but the GC men could have a battle on the final climb. 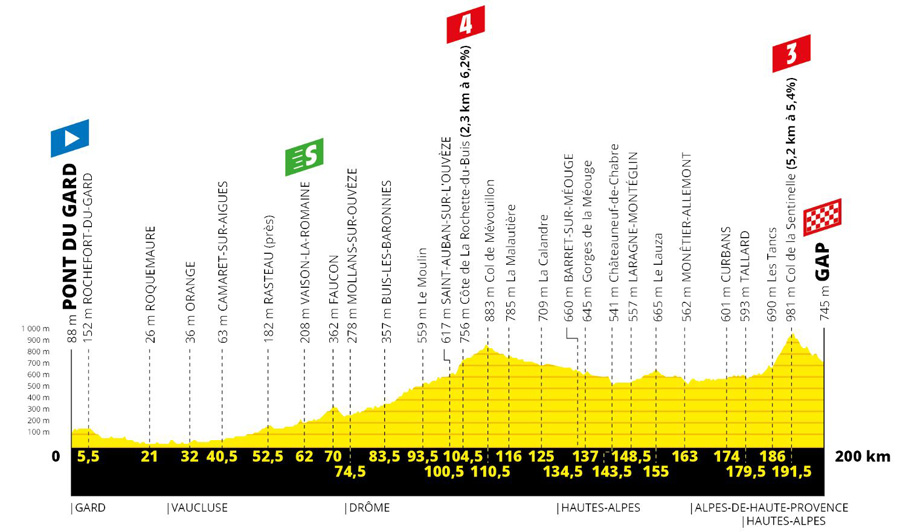 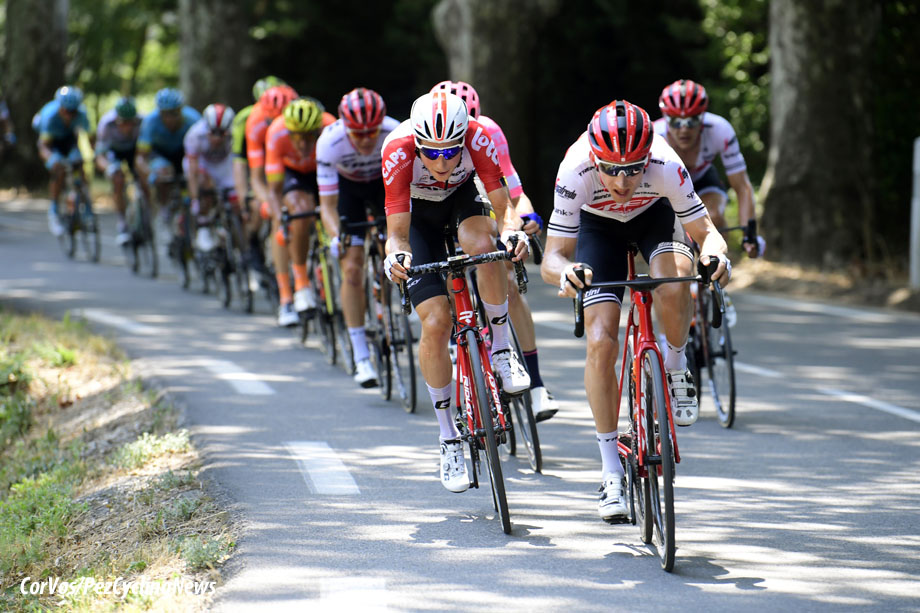 The expected break took five, then ten minutes, then…. 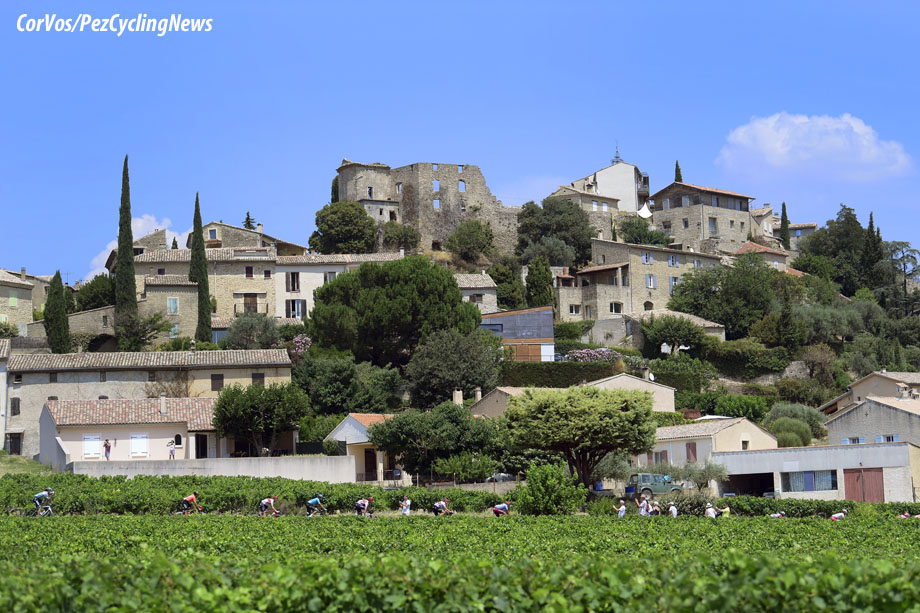 The peloton wasn’t too bothered with the break

The large ‘break of the day’
160 remaining riders started in this sun-drenched stage 17. For many riders and teams this was one of the last chances to go for a stage win and they didn’t want to let that opportunity pass them by. A solid group of 34 riders escaped not long after the start, including Greg Van Avermaet, Thomas De Gendt, Bauke Mollema and Rui Costa, who won the stage in Gap in 2013. 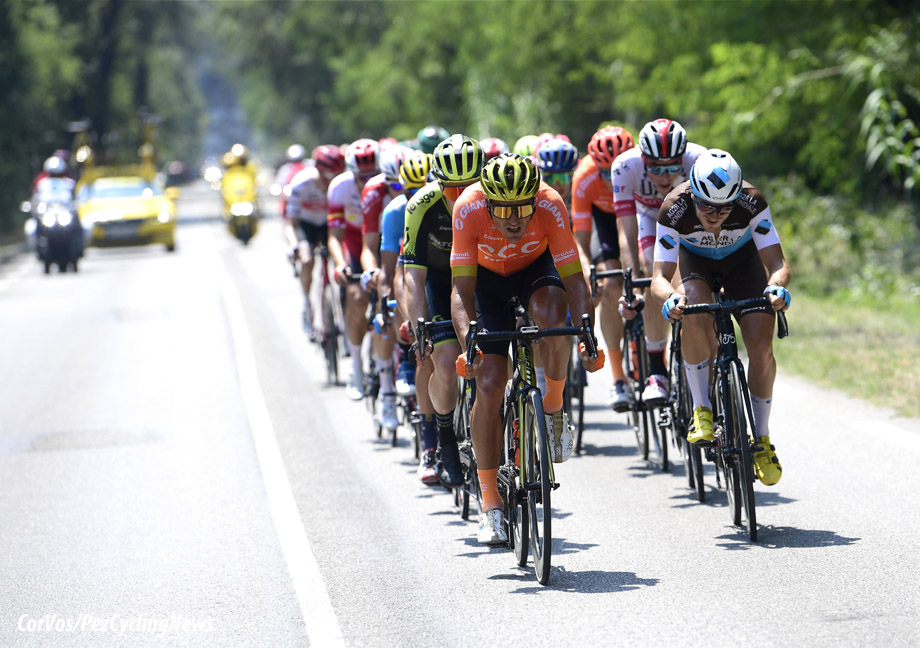 Greg Van Avermaet has been looking for a stage win

The French WildCard teams; Arkéa Samsic and Total Direct Energie had missed the move and immediately hit the front of the peloton. When the leading group had a minute lead after 25 kilometres, Élie Gesbert and Anthony Turgis tried to make the crossing together. Their counterattack soon proved doomed, and the two Frenchmen were soon back in the peloton. Then the entire team of Total Direct Energie took up the challenge. 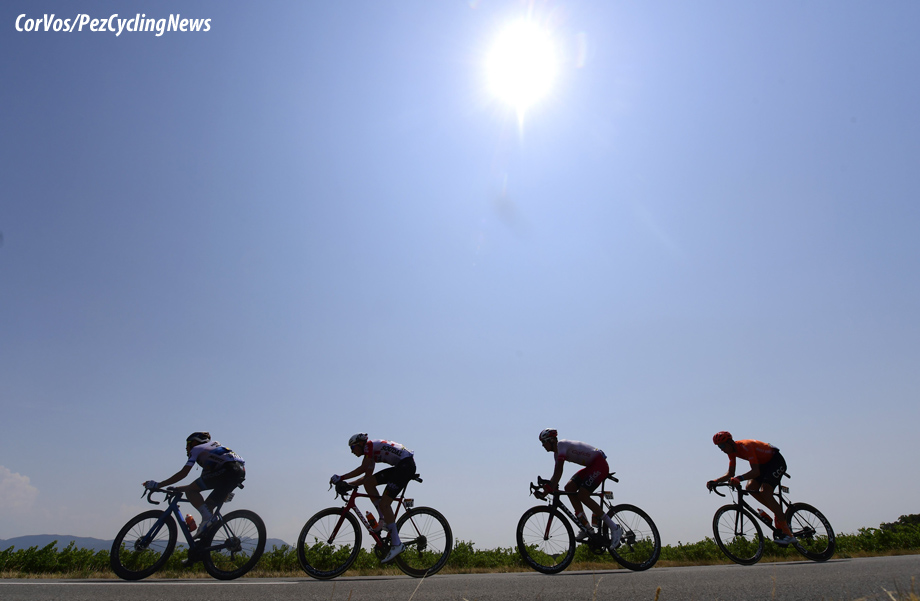 The start was hot, rain later

The escape, which lost Magnus Cort due to a puncture, were not getting any more time, but after 50 kilometers they finally had the blessing of the peloton as most teams were represented with several riders: Cofidis (with Berhane, Herrada, Pérez and Périchon) and UAE Team Emirates (Costa, Bystrøm, Henao and Stake Laengen), each with four riders. Trek-Segafredo (Mollema, Skujiņš and Stuyven) was with three. Lotto Soudal (De Gendt and Keukeleire), CCC (Van Avermaet and Schär), Wanty-Gobert (Meurisse and Pasqualon), Dimension Data (Boasson Hagen and King), Mitchelton-Scott (Juul-Jensen and Trentin), EF Education First (Clarke and Scully), Astana (Fraile and Izagirre) and Bora-Hansgrohe (Oss and Pöstlberger) all had two men at the front. Kasper Asgreen, Alexis Gougeard, Dylan Teuns, Nelson Oliveira, Nicolas Roche and Nils Politt were the loners. 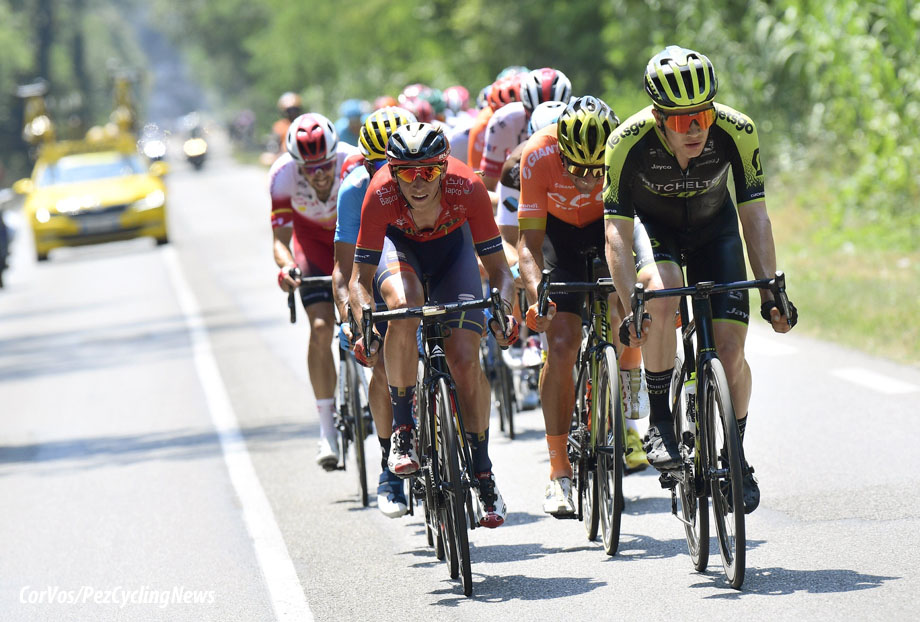 Meurisse was the best place rider in the break in 19th, but almost half an hour down on the yellow jersey. Pasqualon took the points in the intermediate sprint, but the Italian is no longer a threat to Peter Sagan’s points classification. On the climb of the Côte de La Rochette-du-Buis, De Gendt had the only mountain point. 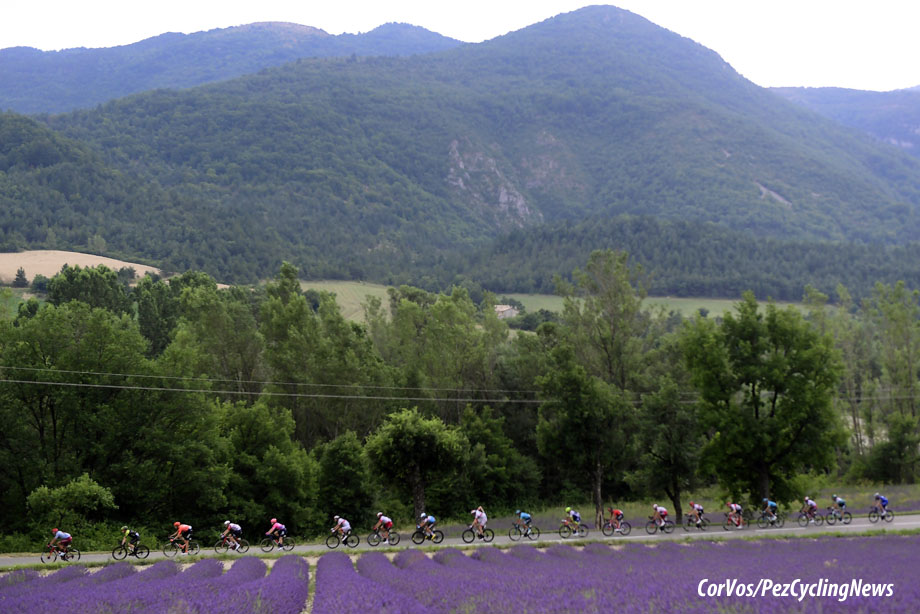 Lavender fields in this area

The leading group took more and more time and by half-way the lead was over 12 minutes. Before the stage the heat was an issue; Steven Kruijswijk and Peter Sagan, among others, commented on the warm weather and the time limit was adjusted, but after 100 kilometres the rain came pouring down. 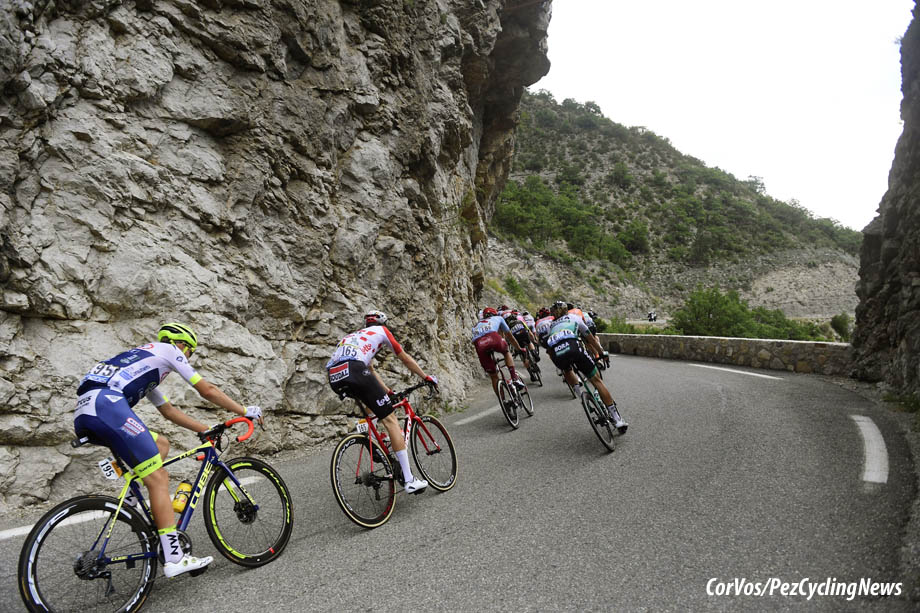 Rocky and dry at this time of year 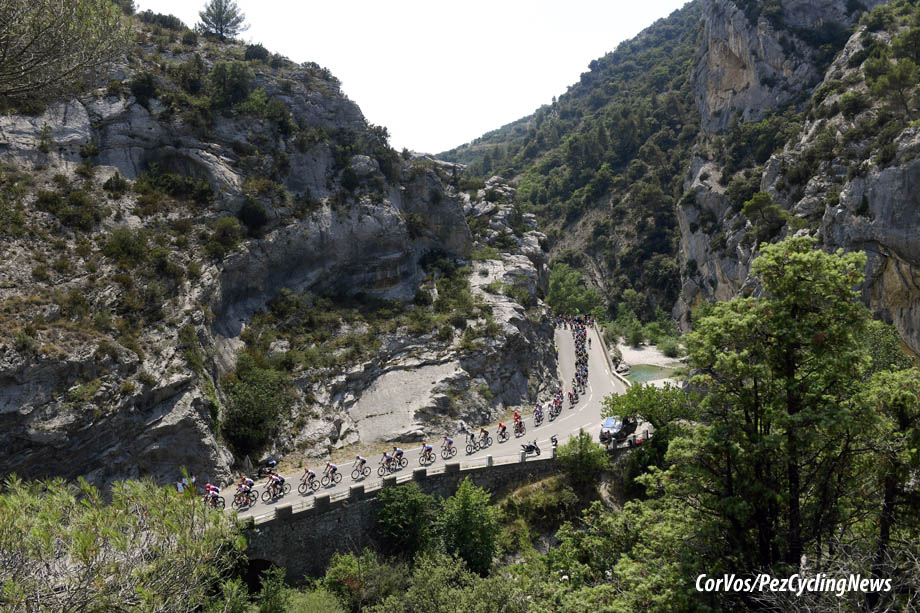 Climbing all the way to Gap

Mollema starts the action
The downpour was short-lived, but the clear blue sky during the start had made way for clouds. With more than 14 minutes the break had built up a safe margin in the run-up to the Col de la Sentinelle. In the last 40 kilometres, nervousness increased in the leading group. Mollema was the first attacker to test the competition. When he was caught, Politt was the next one to have a try. Gougeard and King were the next attackers in the last 30 kilometres, they were joined by nine others. Van Avermaet, Trentin, Izagirre, Perichon, Skujiņš, Oss, Stake Laengen, Asgreen and Scully. 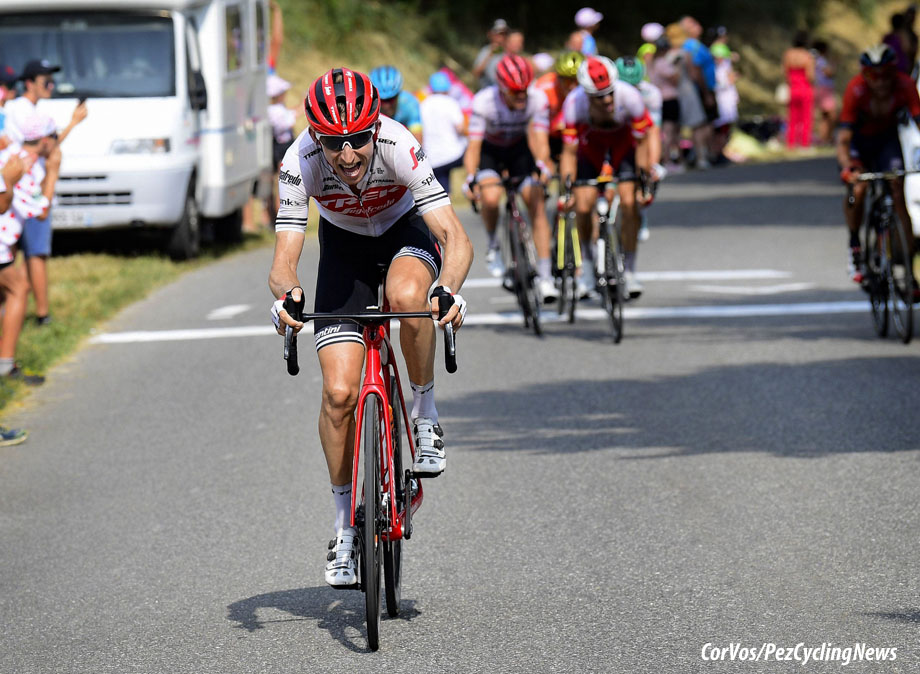 Gougeard paid for his efforts and was dropped at the first acceleration. Just before the Col de la Sentinelle, the front group thinned out again and Matteo Trentin started the final climb solo. The European champion looked very good and attacked the Cat.3 climb. The Italian gave it everything he had and at 12 kilometres from the finish, he already had more than 20 seconds on first chaser; Perichon. 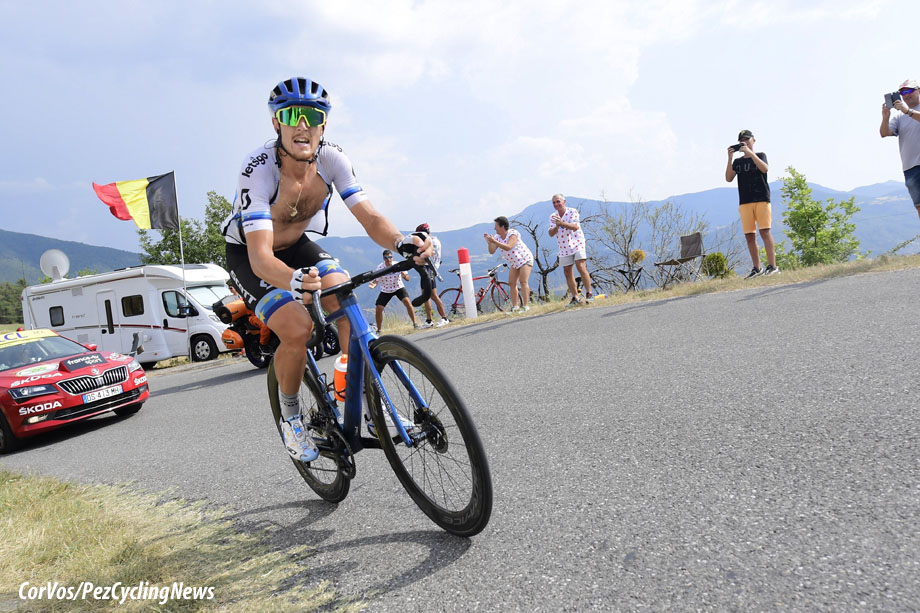 Trentin holds on to his lead
Trentin was the first to cross the summit with Asgreen, who had passed Perichon, at 30 seconds. The Italian was by far the strongest man on the day and crossed the finish line solo with 37 seconds in hand. Trentin gave Mitchelton-Scott their fourth victory in this Tour, after the previous victories by Daryl Impey and Simon Yates (twice). Asgreen finished second with Greg Van Avermaet just ahead of Bauke Mollema in the battle for third place. 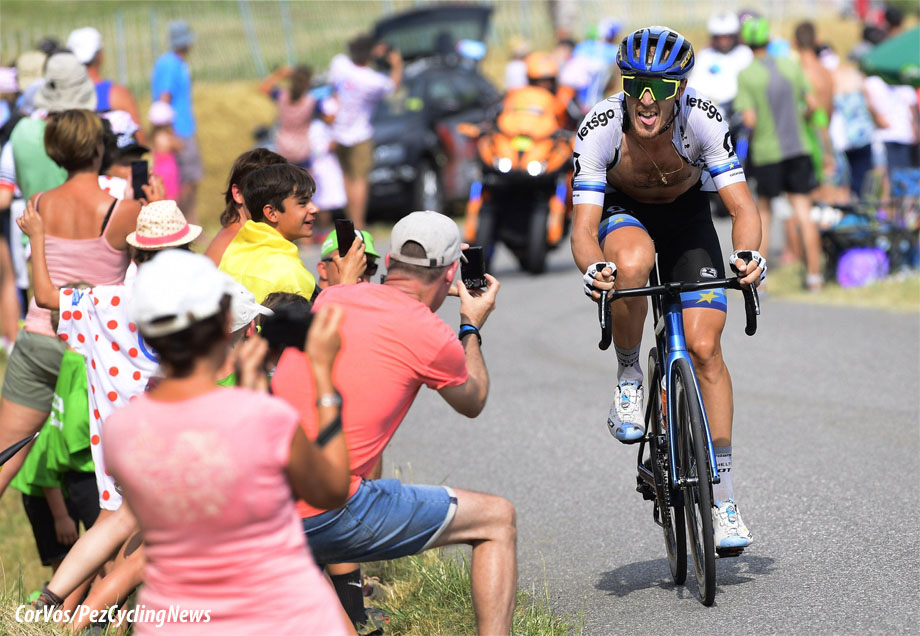 Solo through the fans

The large group with the yellow jersey of Julian Alaphilippe crossed the finish line comfortably 20 minutes later. The Frenchman and teammate Dries Devenyns were at the front of the peloton looking like they had been for a short ride.

The big win for Trentin

Stage winner, Matteo Trentin (Mitchelton-Scott): “This win is worth two wins because after stage 10 to Albi, I thought my chances to win a stage were today. I had stage 12 to Bagnères-de-Bigorre in mind and it went well because my team-mate Simon Yates won it from our breakaway group. Today was definitely my last possibility before three days that are extremely demanding. My mental helped me win even more than my legs. I would have never imagined to win solo. I attacked two or three times, trying to go solo before the climb bearing in mind that I’m more able to ride at my pace at the front than try and follow people who attack uphill. This solo win has a special taste after two that I got throughout bunch sprints. I was making top 10 in all kind of stages. Finally I won, it’s a great moment.” 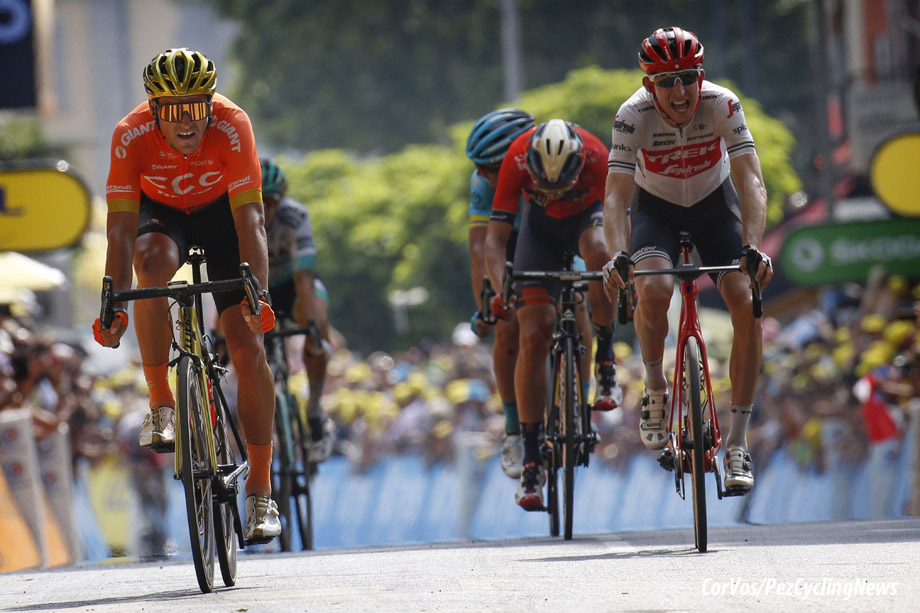 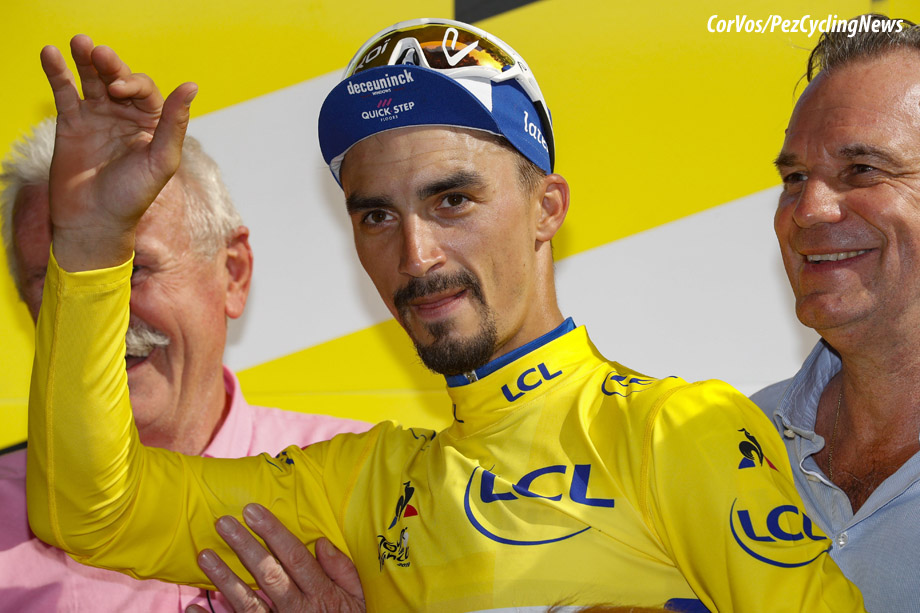 Four climbs on Thursday to lookforward to