Stage Report: On the second day of the 2019 Tour de France; Jumbo-Visma dominated the team time trial in Brussels. The team covered the 27.6 kilometers through the Belgian capital in the fastest time to keep the yellow jersey on the shoulders of Mike Teunissen. Ineos held the lead from the first to finish till the Dutch team beat them by 20 seconds. 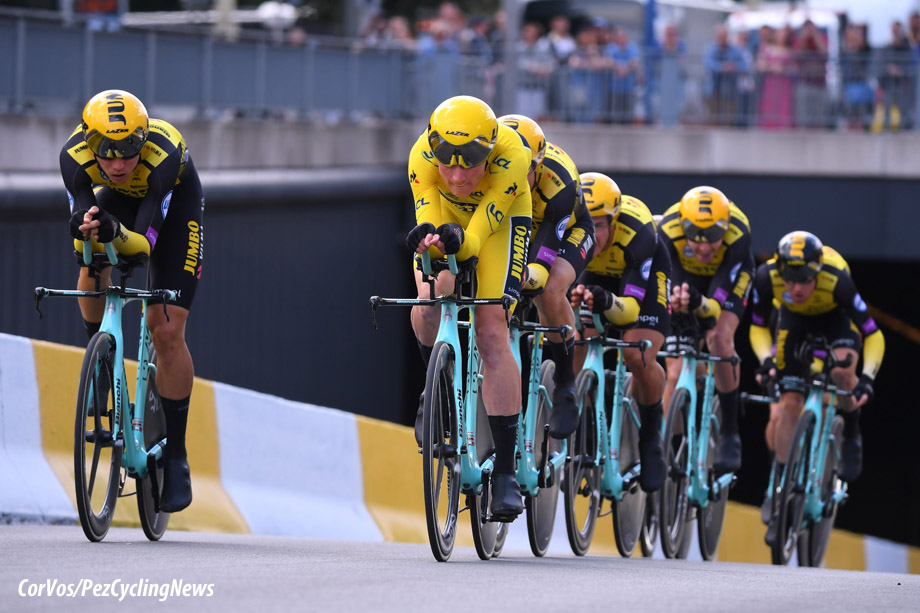 As can happen, the yellow jersey was the power that Mike Teunissen and the Jumbo-Visma team needed to demolish the course and hold the overall lead. 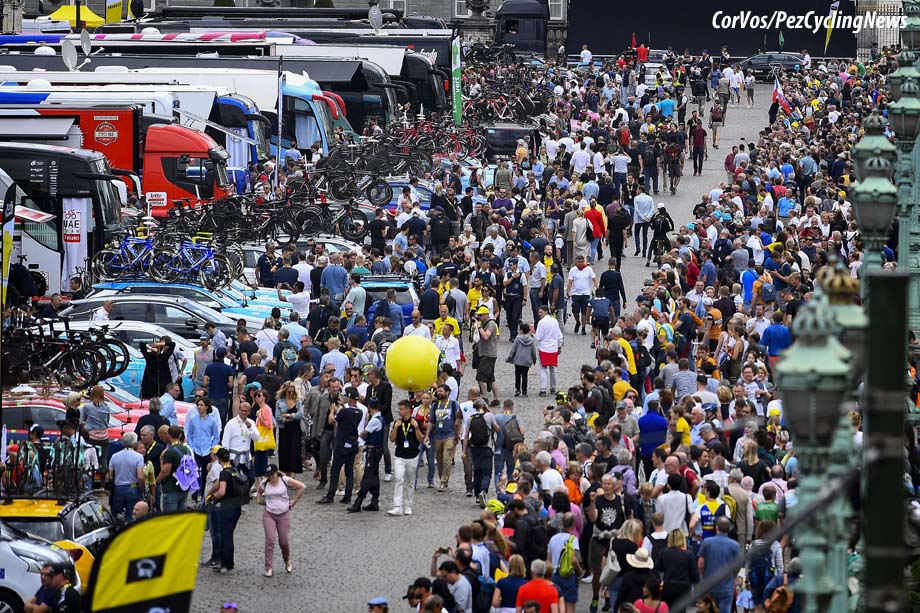 Sunday fans at the team buses

Stage 2 Route:
Stage 2 is a 27.6km team time trial in Brussels and its outskirts, starting from the Royal Palace to the Atomium. First team off the starting ramp was Ineos at 2:30pm for a fast, wide course without too much technical problems. The winning team will come from the fast specialists. 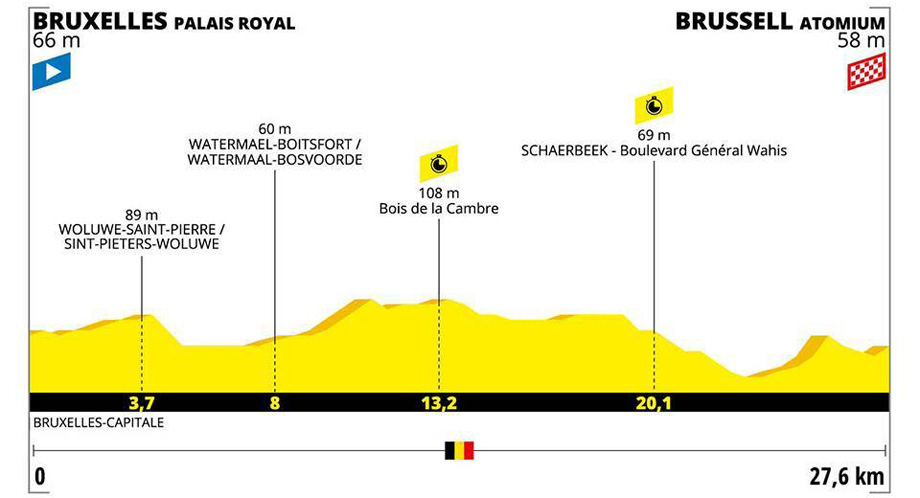 Ineos first team
Team Ineos was the first to start the team chrono in Brussels. The British formation with leaders Geraint Thomas and Egan Bernal was one of the top favorites and so their time would be the target for all others. Without Wout Poels and Luke Rowe, Ineos reached the finish at the Atomium in 29:18, at 56.5 kilometers per hour. 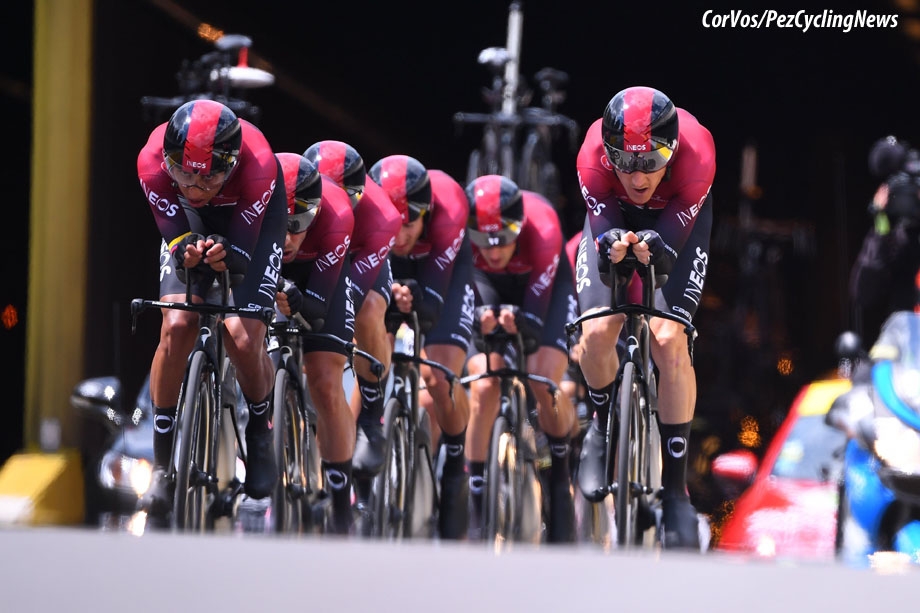 Ineos were the first team off, and fastest till the last team

Geraint Thomas (Ineos) said at the finish: “I felt really good today. We got a good speed and we managed to hold onto it. We could have taken some curves faster but that was a minimal loss. We’re leading for now but we always fear that others go faster, like Jumbo-Visma or Quick Step, we’ll see… We’ve always been close in TTT at the Tour de France but we have never won it so far.” 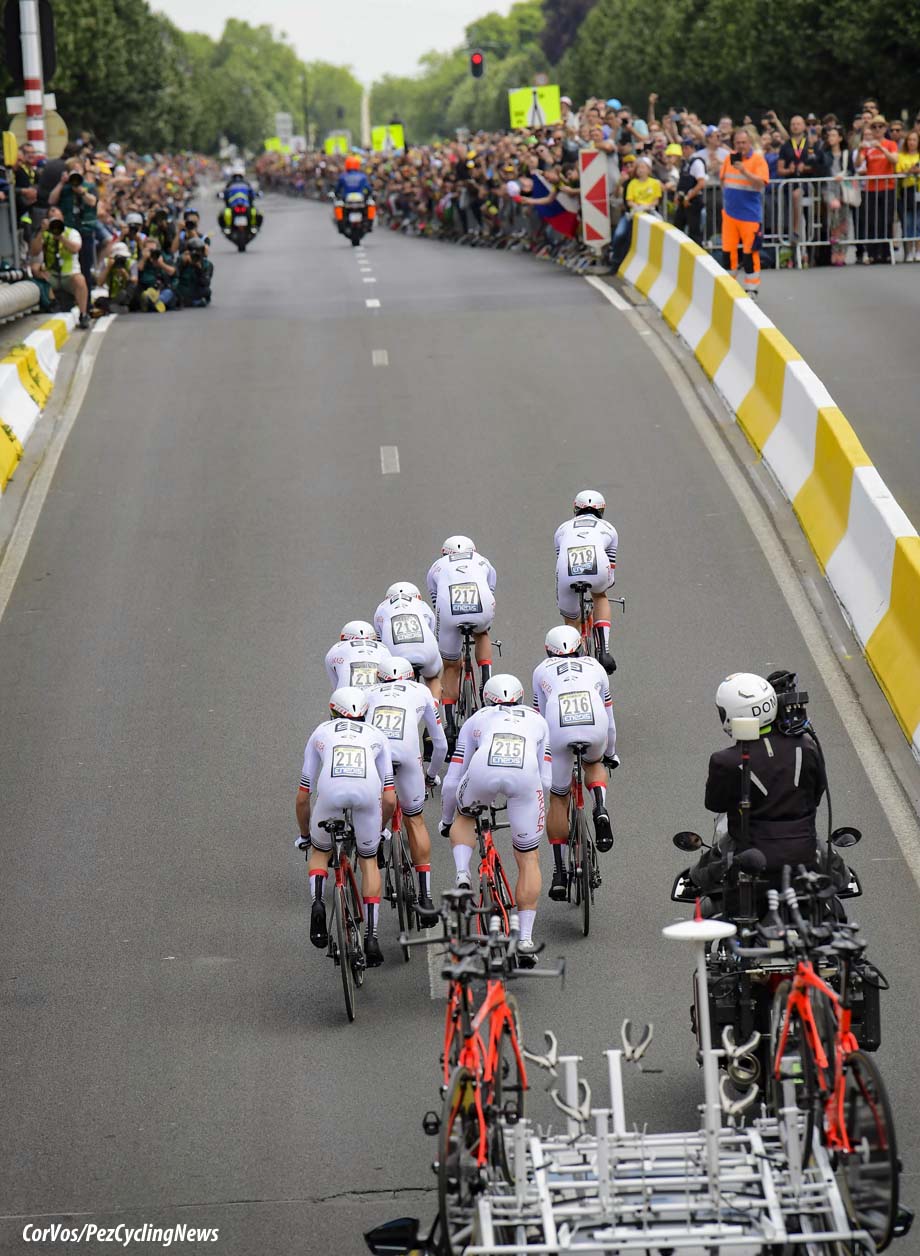 Arkea-Samsic, second on the road, but 1:30 down at the finish to Ineos 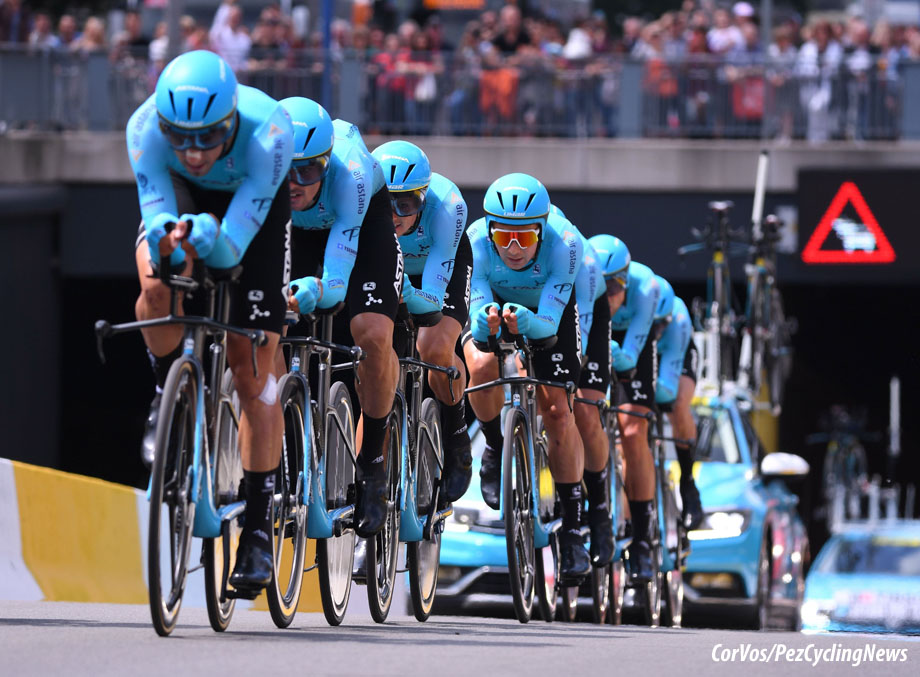 Astana with an injured Fuglsang 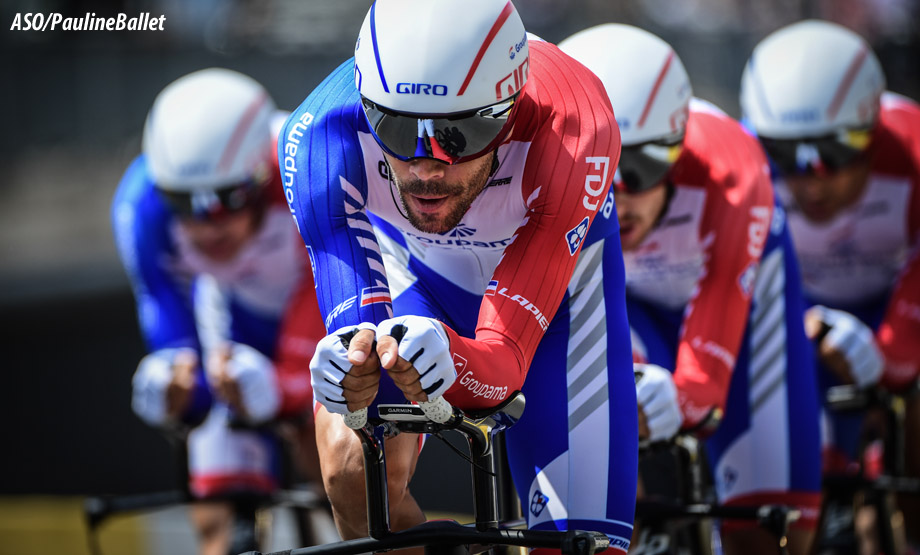 Groupama-FDJ crashed in the final meters

Astana (with Jakob Fuglsang) lost 20 seconds on Ineos and Groupama-FDJ (Thibaut Pinot) were only 11 seconds down on the star formation after 27.6 kilometers to limit the damage. For the AG2R-La Mondiale, Movistar, UAE Emirates and Trek-Segafredo, the damage was greater, around a minute. 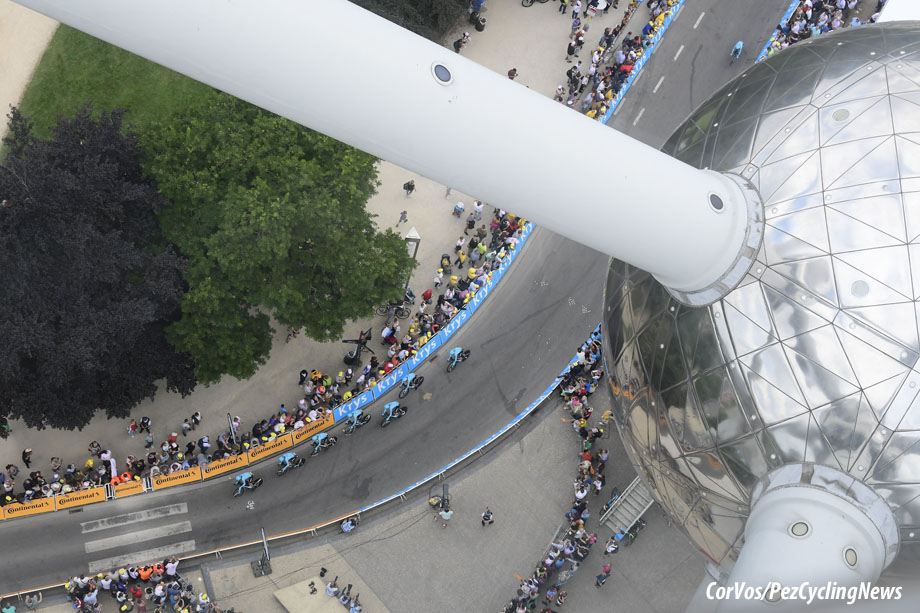 Not a bad view from the Atomium 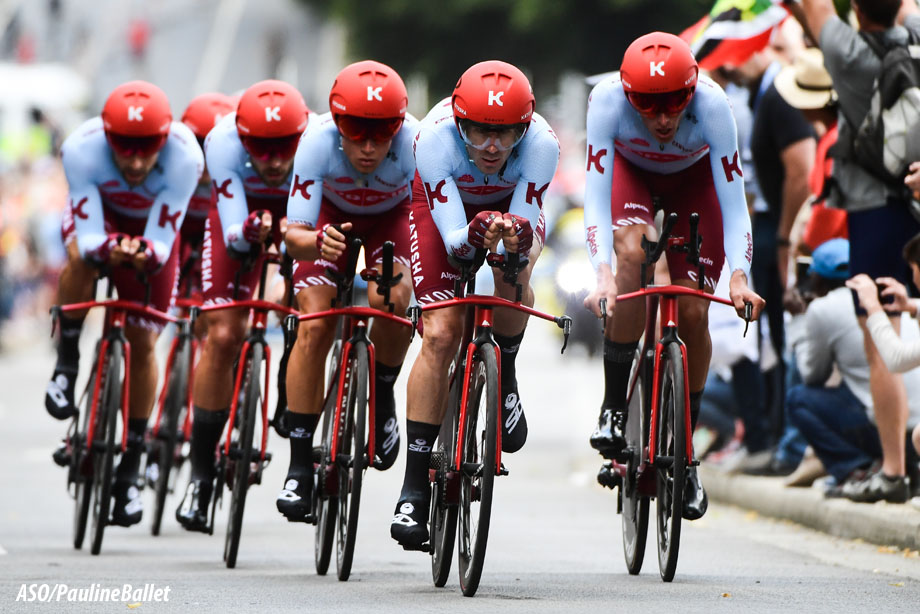 Katusha-Alpecin and Team Sunweb just short
There was a strong performance from CCC. KOM Greg Van Avermaet’s team lost just 11 seconds on Ineos. Katusha-Alpecin was faster than Ineos at the two intermediate time points, but lost the advantage in the final section. They were 6 seconds behind at the finish line. Sunweb kept pace with Katusha-Alpecin to also lost 6 seconds, putting the German formation in the top rankings. 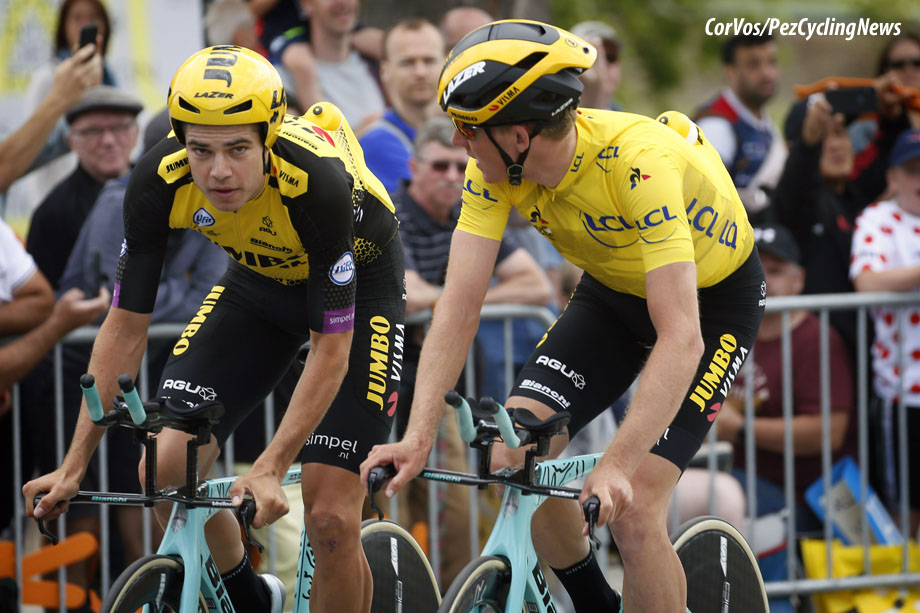 Van Aert and the Yellow jersey, Teunissen, check out the course 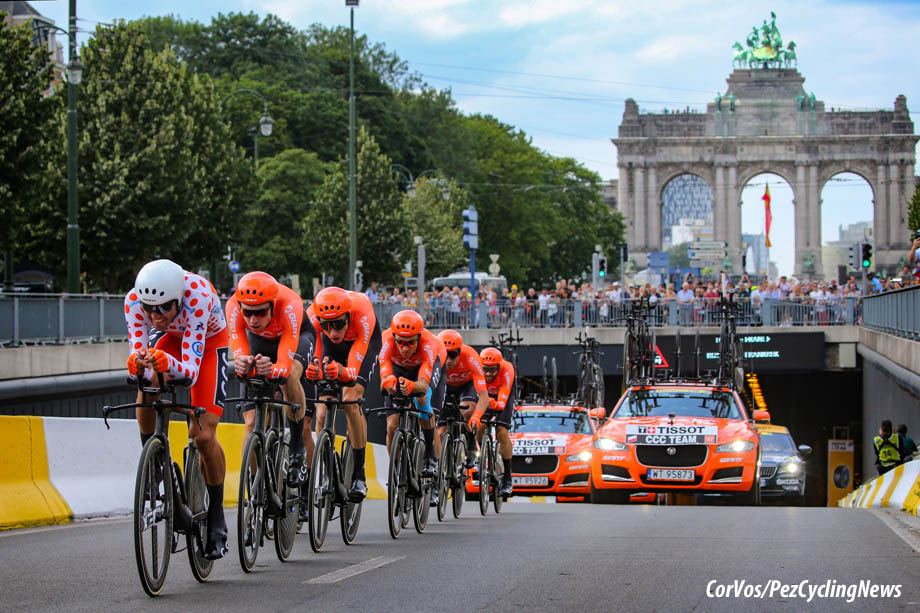 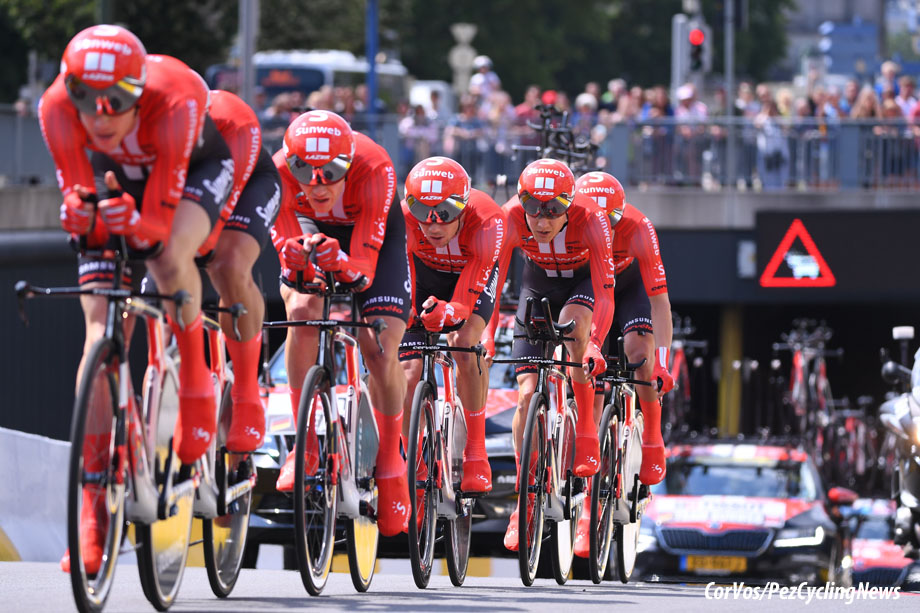 A very good time from Sunweb, 6 seconds down on Ineos 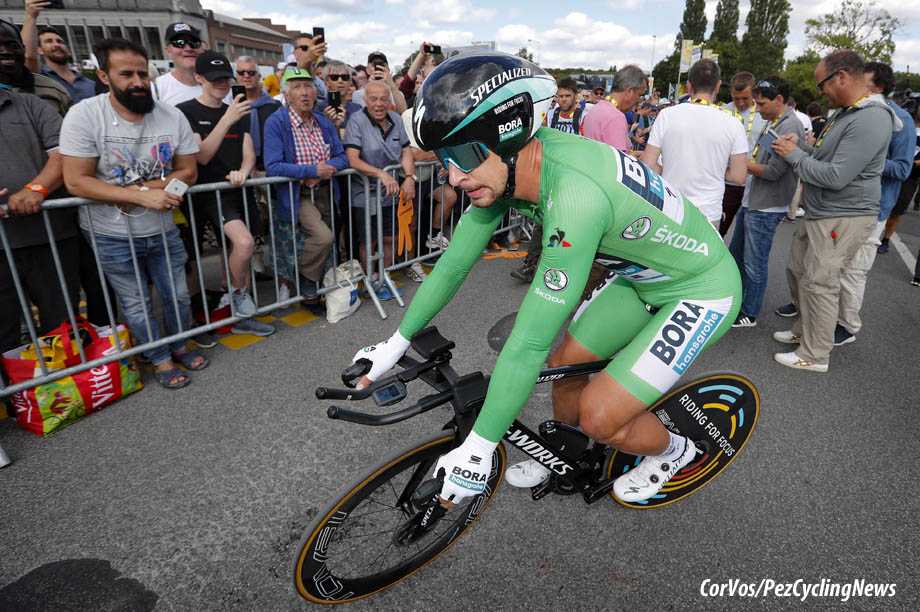 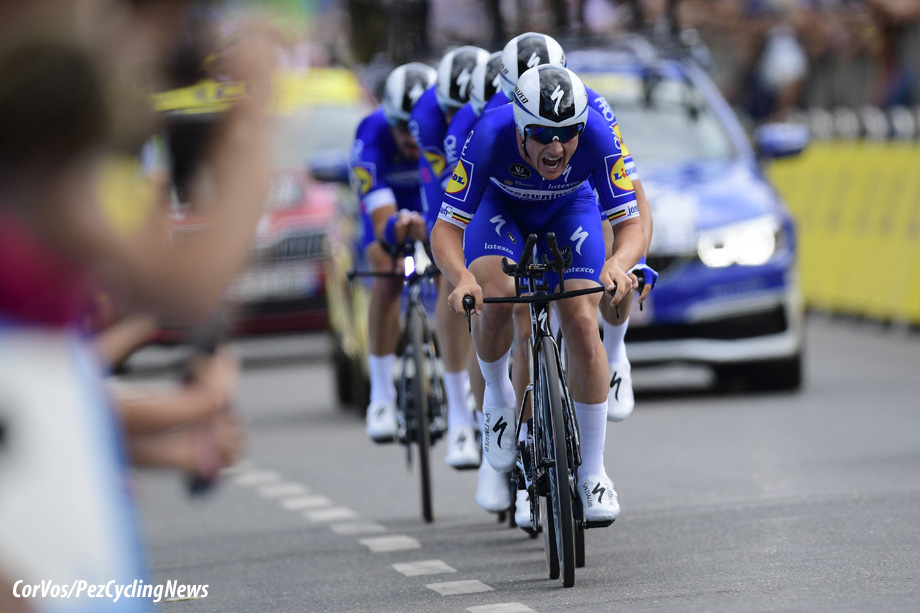 Deceuninck – Quick-Step were fast, but…

1 second for Deceuninck – Quick-Step
Deceuninck – Quick-Step looked to beat the British team. The Belgian formation seemed to be within the time of Ineos in the final meters, but it just wasn’t to be for the home team. In the end, Yves Lampaert and Co. lost only 82 hundredths of a second on Ineos. 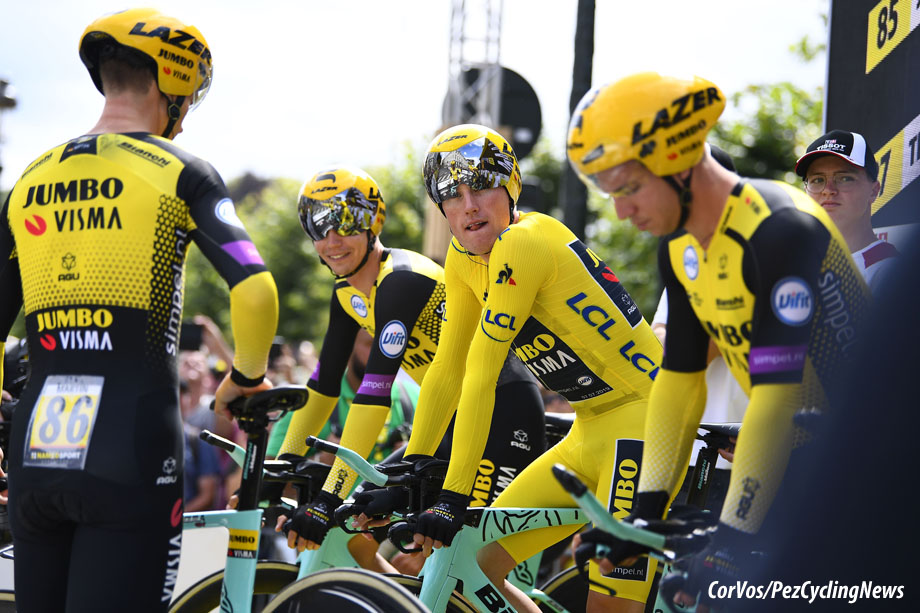 Ready for the off

Jumbo-Visma were flying
Jumbo-Visma started at 16.15 as the last team. Crash victim; Dylan Groenewegen was dropped by the others after 10 kilometers, but it was clear they were going fast at the first time check. The yellow train was 10 seconds faster than Katusha-Alpecin. On the way to the second intermediate point, the Dutch took another 3 seconds. 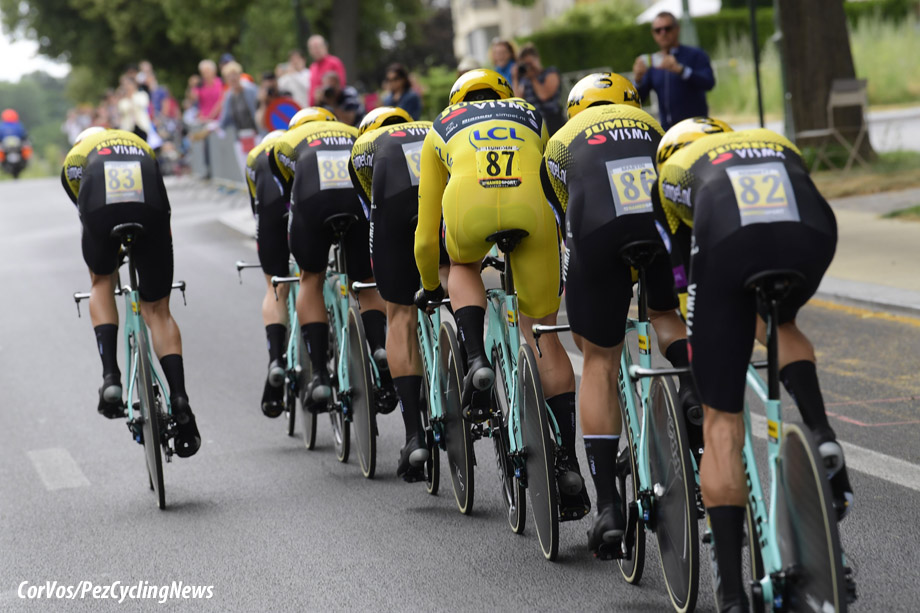 That wasn’t all for Jumbo-Visma. Without Groenewegen, Amund Grøndahl Jansen and Laurens De Plus, the other five managed to add a little more. With a whopping twenty 20, the team managed to beat Ineos, taking the stage win and holding the yellow jersey. Leader Steven Kruijswijk will be very happy with that. 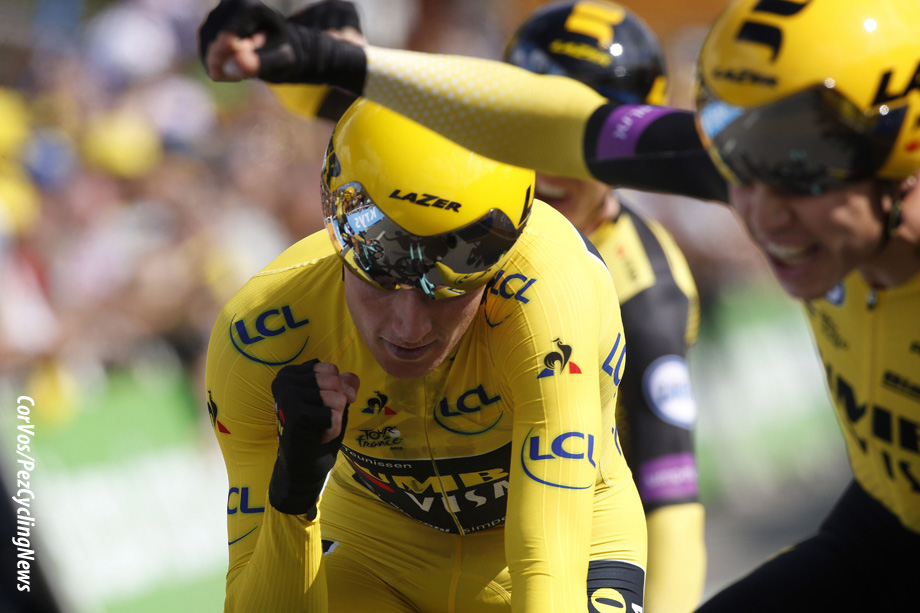 Overall leader, Mike Teunissen (Jumbo-Visma): “Yesterday it was a dream come true, and it’s the case today again. We went hard from the start. Dylan [Groenewegen] did a good work at the beginning but because of the crash yesterday, he couldn’t stay for long and we had to work out our tactic without George [Bennett] because he’s too small although he felt good. The other guys were very strong. Everybody kept their pace. We heard we were the fastest. It gave us a lot of morale. We were flying. It’s not that I’m getting used to winning stages at the Tour de France but it remains special. In the end, yesterday it was mainly me who took credit for the win, today it’s eight strong riders, the staff and everyone who contributed to the team’s success. It was very big goal for us to win this.” 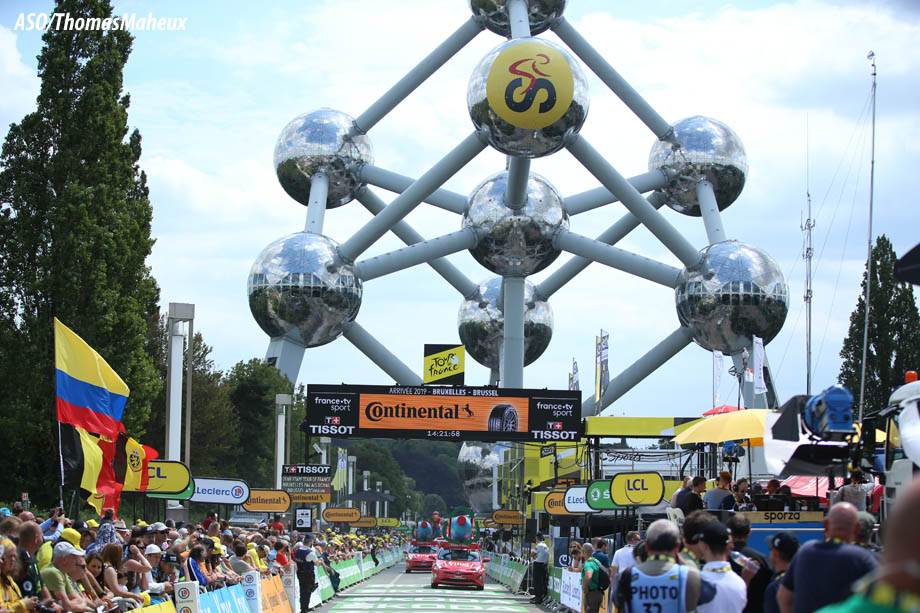 The finish at the Atomium